This board helps you to share your walking route experiences in England and Wales... or overseas.
Warning Please note that hillwalking when there is snow lying requires an ice-axe, crampons and the knowledge, experience and skill to use them correctly. Summer routes may not be viable or appropriate in winter. See winter information on our skills and safety pages for more information.
Post a reply
24 posts • Page 1 of 2 • 1, 2


After a weekend of excess food and drink I needed to get out there and work off a few pounds. I remembered a discussion via text message with Sarah over a year ago when she was visiting Canada for work and sent me a photo of a mountain. It was beautiful, even though the photo showed more of the commercial bins at her hotel than the actual mountain. It was called Old Baldy, "think you could get up this" she said, "no problem" say's I (never actually dreaming that I may have to keep my word at some point) Though to be honest, at 2386m (7830 feet) it can hardly be called a giant.

So it was that over a year later I drove the short run west along the trans-canada highway and then 25km South on Highway 40 to the signposted 'Evan Thomas' day use car park. There was just one other vehicle in there and the occupier was long gone, with a bunch of trails heading out from here it was likely I could still have this hill entirely to myself. I took my time and enjoyed a cup of tea and a tuna sandwich before starting out along a wide bridleway (seen here directly in front of my truck)

the bridleway makes for an easy going start and the surrounding trees occasionally open up to show the distant mountains where snow clouds hang against the summits in several places.

My guide book tells me to keep my eye out for a faint trail marked by a small cairn, I did find it but it could be easily missed (to say the least) It is in this photo at the bottom (centre) between the two little tree tops....it would have been very easy to keep on striding down the bridleway looking for a side trail, so if you are thinking of doing this hike be aware of this small cairn as it is your only clue. 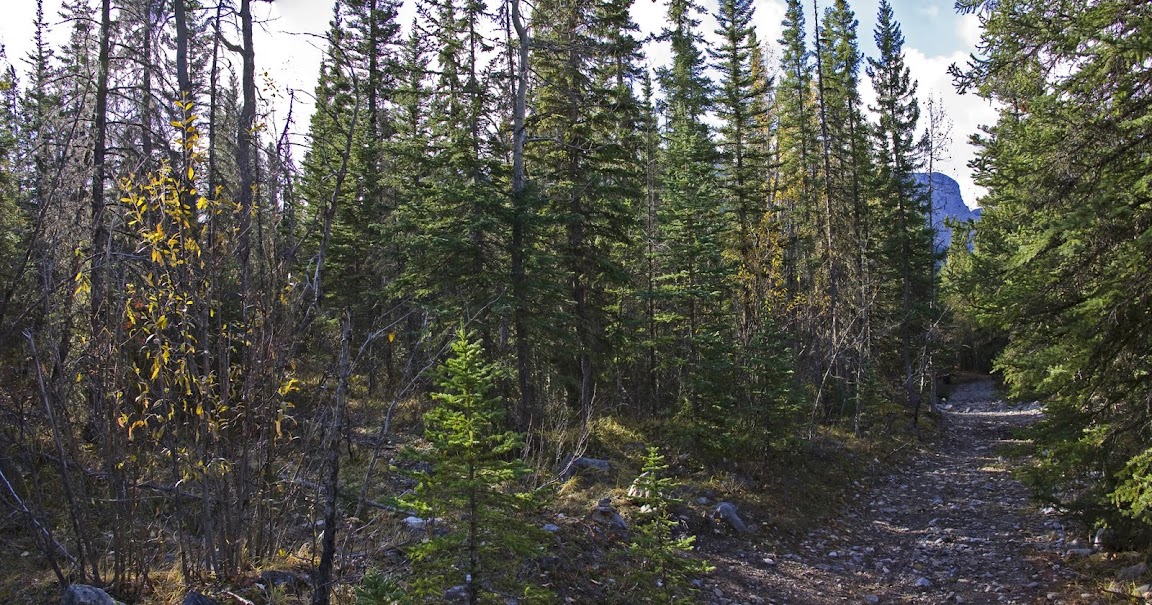 heading into the trees, the faint trail meets up with a small creek and weaves its way along the left hand bank slowly rising beside a rocky outcrop. The underfoot conditions are a little dicey in places due to loose rocks but it could still be described as a trial.

there are occasional sections where the trail has washed away, they present no problem today but in snow or ice conditions these would be classed as dangerous, perhaps even enough to say don't go here in winter as a slip would drop you into a frozen ravine immediately. 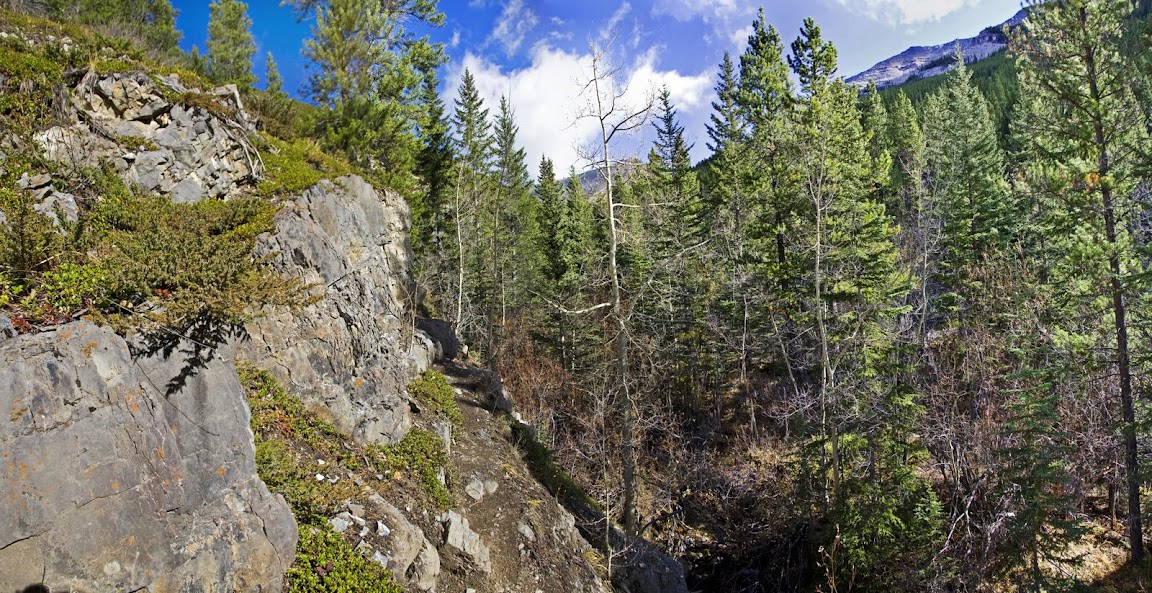 after the dicey steps the trail opens out into a grassy hill area and easy striding along wide open space is a perfect antidote to the previous few km's.

Once over the grassy hill and back into a forested area I am searching for a cairn to make the final turn directly uphill toward the summit, again it is tucked away behind a tree, as I pass I turn around to look back down the trail and notice it here on the lower right of the shot. 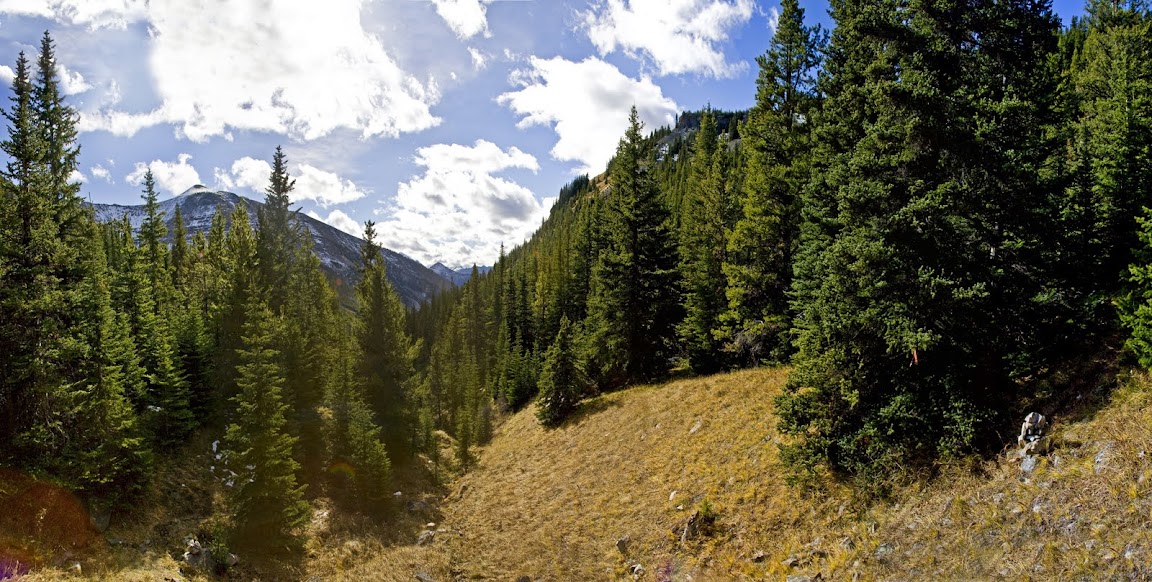 from the small marker there is an almost invisible trail below the boughs of the trees which must be brushed aside as you walk for the next few hundred yards before breaking out at the bottom of a long scree slope.

I decide against tackling the loose scree and rubble and instead made a direct approach up the green slopes with scattered snow clinging to their flanks, looking back now and again over the ascent route.

As I reach the top of the rise I see the small summit away to my left and an entire horizon of mountains from Mt Joffre in the south all the way north to Mt Aylmer. There are far too many to name and in the shot below still a large number hidden by low cloud.

Looking down over the Kananaskis golf course I can imagine how fantastic the views must be from the fairways. Maybe I'll give it a lash sometime.

So, there I am...... old baldy, standing at the summit of Old Baldy. I should add that it is absolutely bloody freezing up here, even with the sunshine and an afternoon temperature of 12 degrees down at the car park it is far from that up here. 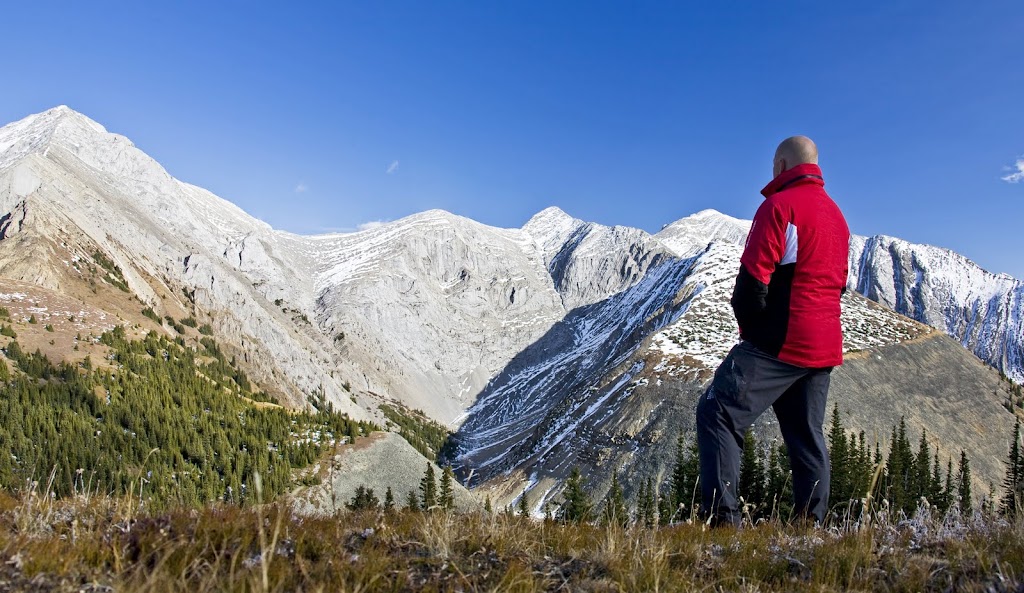 A short wander down to the northern end of the summit provides such a wonderful panoramic view of mountain ranges in all directions that all I can do is stand and stare for quite a while.

heading back up toward the summit the view is no different, incredible vistas in every direction. The summit itself has no cairn or marker just a few small pine trees.

I made use of those small trees to keep the cold wind off me whilst I enjoyed lunch. I decided to make a circular walk around the ridge to the eastern end and then make my return via the edge of the scree slope seen in this shot below the trees.

walking along the ridge the mountains to the west bristle with peaks and points recently snow covered and currently doing a great job of holding back more snow clouds.

at the eastern end of the ridge the rolling hills give way to a steep vertical drop off and another long valley reaching out to the north west.

looking back across the ridge from the eastern end shows the mountains in preparation for winter, the temperature up here will ensure much of the snow remains in place now until march next year.....it seems such a long way off right now.

I take a last look around from the east ridge before beginning my descent toward the top of that huge scree slope, where I hope to find a warmer spot for a last cuppa before the full descent.

at the top of the scree slope I find a nice sunny spot to stop for a few minutes, exploring the area I think the scree/rubble slope is too steep and mobile for my liking and I opt to circle it and descend at the side and meet up with my ascent path.

looking below from the top of the slope I can see the shape of the seasonal tarn that exists there from the spring melt until the snow is gone, it will remain dry now for another 6 months.

During the descent and along the wander home I take stock of the potential other mountains around here, there are a number of slopes that look inviting though I don't know if I will get back to them before the winter closes in.

back on the bridleway and just one km from the truck and the sun is almost gone behind the mountains, the nights are really drawing in around here and we have yet to turn back the clocks...I'm going to have to start getting up earlier.

I'm glad I remembered that text conversation with Sarah all those months ago, this is one mountain I wouldn't have wanted to miss out on. There are so many mountains here I often find myself chasing around in circles when trying to decide which one to hike, any connection makes the decision easier......now, where to next. 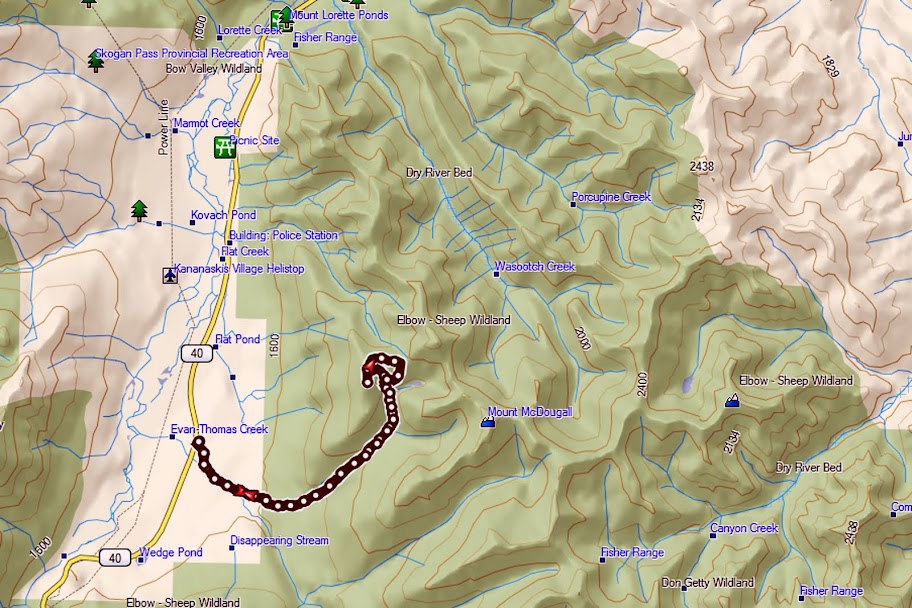 Totally stunning Chris - good to see Baldy(ies!?) again!! Given the choice between cold in Canada and rain on Dartmoor.....i'll go for cold!! Great report (and I still can't see that "Cairn"!).

Chris, Great hike and some fantastic panoramas. That cairn which I could just make out was certainly on the small side. Easily overlooked if looking elsewhere. Ps, like your title, its good to have a sense of humour.

garyhortop wrote:Totally stunning Chris - good to see Baldy(ies!?) again!! Given the choice between cold in Canada and rain on Dartmoor.....i'll go for cold!! Great report (and I still can't see that "Cairn"!).

Thanks Gary, don't be confusing this one with Mt Baldy that I posted back in June (That's a few miles North of here

) I think they ran out of names for all the hills

trekker53 wrote:Chris, Great hike and some fantastic panoramas. That cairn which I could just make out was certainly on the small side. Easily overlooked if looking elsewhere. Ps, like your title, its good to have a sense of humour.

Cheers T53, this is one of the lesser used hikes around here which makes finding that side trail almost impossible, that scratty little cairn is a 'must find'

Cheers Gammy, what are you doing so far to the south

Pity you didn't see a Bald Eagle, just to make a trio

garyhortop wrote:Cheers Gammy, what are you doing so far to the south

Pity you didn't see a Bald Eagle, just to make a trio

Thanks Susie, never thought of that, I do see a few around here. It would have been great to get one in the summit shot and be part of a trio

garyhortop wrote:Cheers Gammy, what are you doing so far to the south

Lived down there for a few years myself mate, the only upside was not needing a car - the rest of it was everything I dislike all rolled into one place

The old adage of the smaller hills (2386m

Cheers JK, I think they should get a few more of these little uns out here....it would make life easier

Now that's what we like to see. Great views, no life threatening wildlife and no slips or falls

Another from the top draw Chris

PeteR wrote:Now that's what we like to see. Great views, no life threatening wildlife and no slips or falls

Another from the top draw Chris

Cheers Pete, I was just reminiscing about my year so far and thinking I haven't done too bad as a stranger in a strange (and wild) land.....but I've not made it a full year yet so best keep my fingers crossed

Cracking photos and report again. Great to see your fully recovered from your mishap couple months back.

Cheers DB, its good to be fully functional again, though it did take much longer than I hoped (as is always the case I suppose)