Today Rolf and I are heading to Cortina d’ Ampezzo about 1 hours drive from our base in Sexten. Cortina is well situated at 1200 metres and surrounded by huge mountains. It was also home to the Winter Olympics in 1956.
Our challenge is to summit the Tofana di Dentro at 3238m and Tofana di Mezzo, a bit higher at 3244m. They tower 2000m over the western side of Cortina. Luckily for us there is a cable car, Freccia nel Cielo ( Arrow of the Sky ) that will take us up to Station Ra Valles at 2470m, one stop below the summit station at 3197m.

At 0920hrs we exited the cable car and walked past the skiing paraphernalia for 200 metres before we picked up path number 407. This track was a former 1st World war path. Soon we saw a sign saying, Via Degli Voluntari, meaning Way of the Volunteers. Did they really volunteer?? I wonder.
This route contoured below the large east faces of Tofana di’ Mezzo and Tofana di Dentro. Below the Tofanas eastern walls

The gently rising path took us to a large rock face that appeared to block our route but either nature or the Italian troops put a decent hole there for us to access to the other side. How convenient. At this point there was ruins of former 1st World War war buildings. Rolf showing me the way

Once through and after some photo taking we hiked along a cliffside trail to the via ferrata Formenton. The wire zig zagged steeply across some easy scrambling so there was no need to put on our equipment. Up by the wire

Soon after we came to a saddle where we noticed extensive cloud ramming up against the Tofanas east walls. Towards the west it was clear. A bit like the Scottish highlands I thought.
We continued along, using the wire rope as and when required. There was a small ridge with serious drops below so the wire came in handy as we traversed carefully. Just past some war caves we came across Barracca degli Alpini an emergency shelter built into the rock face. Like bothies I had to stick my nose in. I was surprised to see bunk beds and bedding supplied. Also a table, chairs and a fire burner. So much comfort at 2920m. 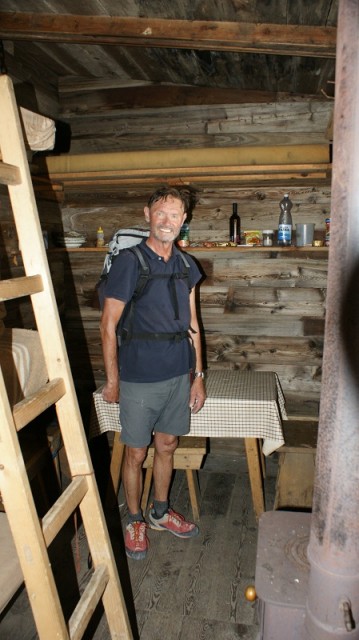 Myself having a rest

It was back to normal hiking now as the path twisted its way around the rocky spires.
We then came to a big scree slope for a 300 metre push to the summit. This took a little bit longer than expected as you take 3 steps forward and slip one step back. But upwards we must go. Reminds me of some of our Munro's

Till now it was just Rolf and I but now we could see several people coming down. I met some Americans and had a blether with them for a while. Meanwhile Rolf carried on his way to the summit. Very soon I joined him.
2.5 hours after setting off we were now on Tofana di’ Dentro at 3238m. On summit. On the right Tofana di' Rozes which we summited last year

Wow, I thought as I looked around 360deg. Sometimes we could see Cortina 2000m below us before the clouds covered it up again. We took advantage of this wonderful spot to have some lunch at its small summit cross. Staring us in the face was our next mountain Tofana di’ Mezzo. We could see its broken rock strata lines going vertically before levelling off. It looked very impressive. Nature must have been very violent here at one time to do that.

To get there we had to go down over the edge onto the via ferrata Lamon where this would take us to the saddle before the climb to Tofana di’ Mezzo.
Lunch over, it was time now to don our harnesses and hard hats. Once clipped on to the wire we got down fairly quickly. There was lots of good ledges and footholds to hasten our zig zagging descent. Nearly at the saddle

Down at the pass things got a bit more interesting. A vertical scramble before traversing the ridge

Here we had to clamber around the rocky spires as the wire twisted its way between the west and east sides. 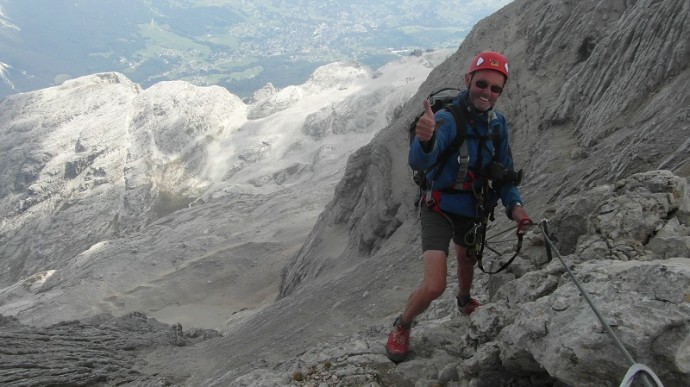 Rolf, getting a break in the clouds showing Cortina a long way down

Clouds were still getting jammed up against the Tofanas eastern side so no view to my left, however the right (west side ) was clear so I could enjoy the panoramic views. Below me the cliff face drops to the stony basin below and its small pool. 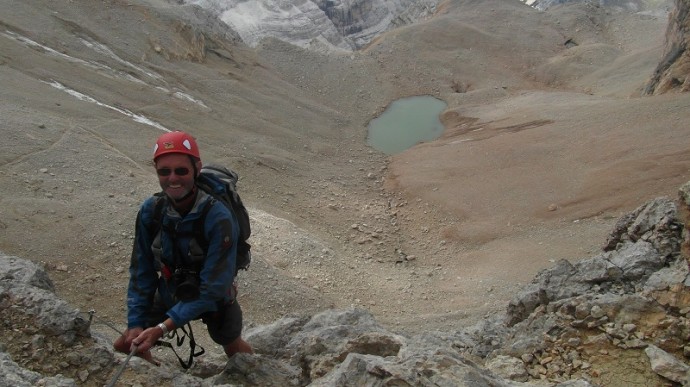 On other side of ridge now

Still I was clipped to the wire feeling safe in my surroundings and not really wanting it to end. A joy to be here

We took a bit longer to cross this ridge not because of any difficulties but due to the constant photo taking. Our descent from Tofana di' Dentro

Emerging off the ridge we were on safer ground now and the wire was in most places not really necessary. It was a straight walk up on the crumbling rock ledges. Tofana di' Dentro with cloud on its eastern side

Ahead the rock strata lines arches over. Not far from summit now I’m sure a geologist would love this, trying to understand what events took place here millions of years ago.

Shortly we were on the tourist track from the top Cable car station to the Tofana di’ Mezzo summit. As we approached the summit at 3244metres, the area and its large cross was very busy. 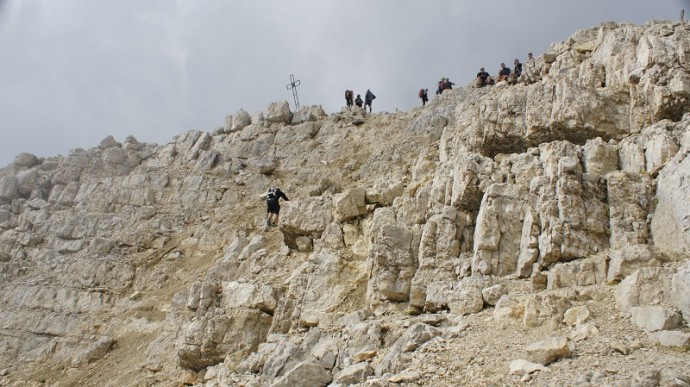 Some were cable car tourists whilst others had come up by a much harder via ferrata from the south side. That would have been a bit too demanding for me. I was happy at what I’ve just done, nothing really difficult but the views and location was outstanding and enjoyable.

We managed to get a bit of space at the cross for our oblitagory photo. We had another bite to eat while hearing the different languages being spoken around us. From the start of our walk at Ra Valles station to this summit only took 4.5 hours.
I enjoyed this hike very much and being over 3000m you could see far and wide.
After a good rest all that’s left now is the short walk down to the top cable car station to descend the 2000metres to Cortina. Ra Valles, where we got off earlier

Re: A Fine Pair of Tofanas.

Another absolute stunner T53, what a wonderful alpine route. Rock hopping at it's very best combined with spectacular views and the history of the trail making it an enthralling hike.

That emergency shelter is better than some hotels I've been in

Re: A Fine Pair of Tofanas.

Re: A Fine Pair of Tofanas. Dolomites