The time was 1330hrs. At an altitude of just under 2700m we had only gained less than 100m since leaving the tunnel exit at 2600m and had taken 4 hours from the car park. All those ascents meant nothing in the end. There was a further 300m of via ferrata and a 200m hike to the summit.
It would be a long day if we continued and we would then be coming down in darkness. What made the decision easier for us was that higher up there was lots of ice clinging to the rock. A few days earlier lots of snow had fallen while most of it had melted, the rock face being now north facing this wasn't the case. The route follows some drainage channels and these would certainly have been frozen. For us it wouldn't be safe to continue. So unfortunately our summit attempt was abandoned.
However last year we did summit by the normal hiking path so I already knew what was up there. Below is our summit photo. 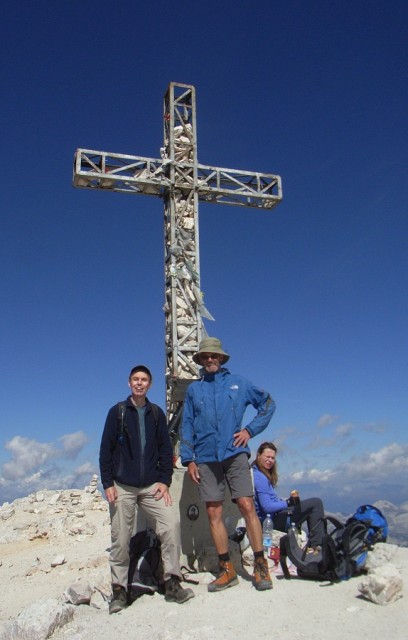 I wasn't disappointed as I think I'd done enough and tested myself to a limit I never thought possible. All thanks to Rolf who had the confidance that I could do it. Cheers mate.
Now that our plans had changed Rolf suggested an optional extra that would finish our day nicely. More of it later.
After a well earned lunch break we headed carefully along the slightly iced up ledge to Tre Dita ( 3 fingers ). Here an outcrop of rock was used as an Italian 1st World War position. The shape of the rock dictated its name. Here we relaxed in the sunshine taking in the views all around. Prominently the two other Tofanas, di Dentro and slightly higher di Mezzo at 3244m focused our attention. A few days earlier we had climbed those two from their other sides at Cortina. If interested see my report, “A Fine Pair of Tofanas”. From Tre Dita an easy scree path took us down the valley before we scrambled down some rough broken rock terraces. Our target was Rifugio Giussani at 2580m which we could see clearly down the valley. Forty minutes later we were there enjoying some refreshments out on the patio. That beer I had tasted ever so good. Looking around I saw the Tre Dita from a different angle and it shows the 3 fingers very clearly. 
Leaving the Rifuge, the path took us south down into a scree cirque passing Rifugio Cantore, now old and abandoned. The fine scree path made for a quick descent before we came to the branch path that led east for our optional extra. Tofana di Rozes behind me

Sentierio Astaldi at 2300m is an easy via ferrata running horizontally for 400m below the south face of Punta Anna, a sub top of Tofana di Mezzo. What makes this path interesting is the layers of pale greens and reds in the rock strata tumbling down the cliff side below our feet. A geological wonderland. The colours and lines contrasted so vividly to the rich green of the forest. Looking south we have great views of the expansive forest and surrounding mountains dominating the skyline. There is no rush now so we take our time enjoying the fantastic scenery, the cliffside path undulating and twisting its way around. A wire is running virtually the whole length but most of the time you don’t need to clip on. Just holding it is enough in most places. Even though it was an easy path it would still have been dangerous to have fallen so concentration was still required. Soon, after many photos taken the marker post appeared showing our descent route back to the car at Rifuge Dibona. A 300m descent down a zig zag path and we were there. 7.5 hours after setting off it was all over. Sadly my Dolomites hiking holiday comes to an end.
But what a day though. Even though it was only 700m ascent instead of 1200m, the day was full of interesting situations from beginning to the end that made it more than satisfying and definately memorable. Thanks Rolf for making it all possible.
I’ll be back.

A final picture of the Tofana in the late afternoon sunshine before the drive back. Some great views Charlie. Well worth the effort!

Another absolute beauty T53, I'm almost as sad to see the last of your Dolomites holiday as you are

I loved the first part through the tunnel and nipping past the large group after a tricky little descent. I would have loved this hike, scrambling about on the rocks is fast becoming my favourite part of hiking

It's a shame you couldn't go for the summit but the mountain will be there another day, and you still got an incredible hike in a stunning location, what more can you ask

Well done on making a prolonged exposure with rarely a look back, fantastic report, I hope you return to the Dolomites soon