I started from the expensive car park at Blea Tarn (£3.40 for 2 hours) From Blea Tarn House there's a good path all the way up, although it's quite steep - I had to stop a couple of times to get my breath.
Although it isn't a very big hill the summit is an excellent viewpoint (on a good day).
Some views from Lingmoor Fell: 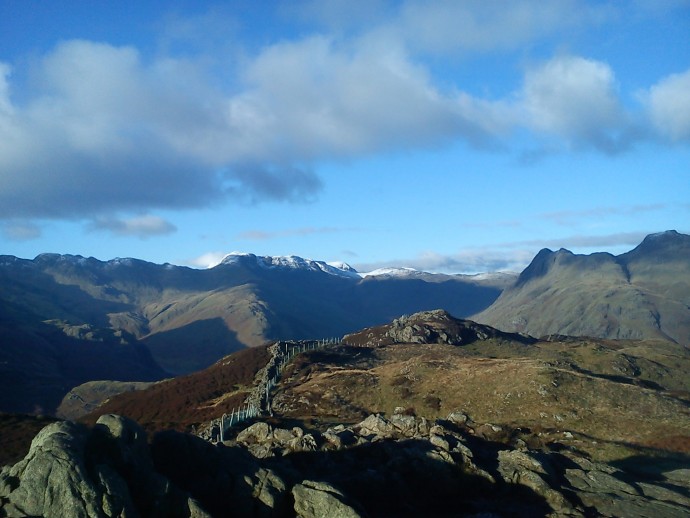 From Blea Tarn I drove over the steep and narrow Wrynose Pass and up to the top of the even steeper and narrower Hardnose Pass for the next hill.

The path starts near a pile of stones at the top of the pass.It seemed like a clear path all the way up but on the way down the path seemed to disappear and I ended up going the wrong way down a steep muddy hillside.
From the top of Hard Knott I could see the Isle of Man quite clearly, but it doesn't really show in the photo. It was still quite early after climbing those two,so I drove back down the Hardknott Pass and up to the top of the Wrynose to try another hill (or two).

The path starts from a big stone with 'Lancashire' written on it (this used to be the boundary before they changed the counties).There is a direct path from here to Cold Pike but I missed it,and the good stony path I followed went to the wrong side of Red Tarn, so I had to carry on up toward Crinkle Crags before turning back to climb Cold Pike.
Views from Cold Pike: If I'd had more time I could have walked across to the top of Pike o'Blisco before going back down to the Wrynose Pass.Unfortunately I wasn't sure if I could do that before it went dark, so I had to leave Pike o Blisco for another time.
The direct path down from Cold Pike was very boggy and indistinct (which is probably why I missed it on the way up.)

A good day out and another 3 in the bag

.I'd recommend Lingmoor Fell in particular for anyone looking for a short walk with good views.

wow, beautiful photos Andy. Cracking weather and a dusting of snow on the peaks....what more could you want, all three of these look pretty damn good to me

I could see it was a great day In the lakes yesterday. I was on grey nag in the north pennines and the views were fantastic all round

Wow...looks like a really good day out and some amazing views there! Well done Andy you picked the right day for it!!