Ell & I watched a film last night called Dangerous Method about Yung & Freud and there psychological interpretations of Keira Knightly's dreams & hang ups.
A sinilar argument boiled within myself this morning. My body claimed that it was a far better idea to stay in bed after the rigours of a very hard week where my head obsessed with bagging another Wainwright or two (I don't think obsessions too strong a word either after having completed 184 of them).
My body ruled for over a good hour whilst the head kept niggling until around 9 o'clockish when I forced myself out of bed, picked up the pre packed bag and jumped in the car.

Damson & I headed up the west coast towards Calder Bridge then hooked right towards Ennerdale Bridge parking in a small layby by the side of the bridleway heading to Lank Rigg.

The weather held for the first section towards the base of Whoap and Damson was enjoying her run about on the icy expanses of grass and bog. We headed up the nose of Whoap first to the left of Lank Rigg with a plan on taking the higher of the two routes round the valley containing Whoap Beck. 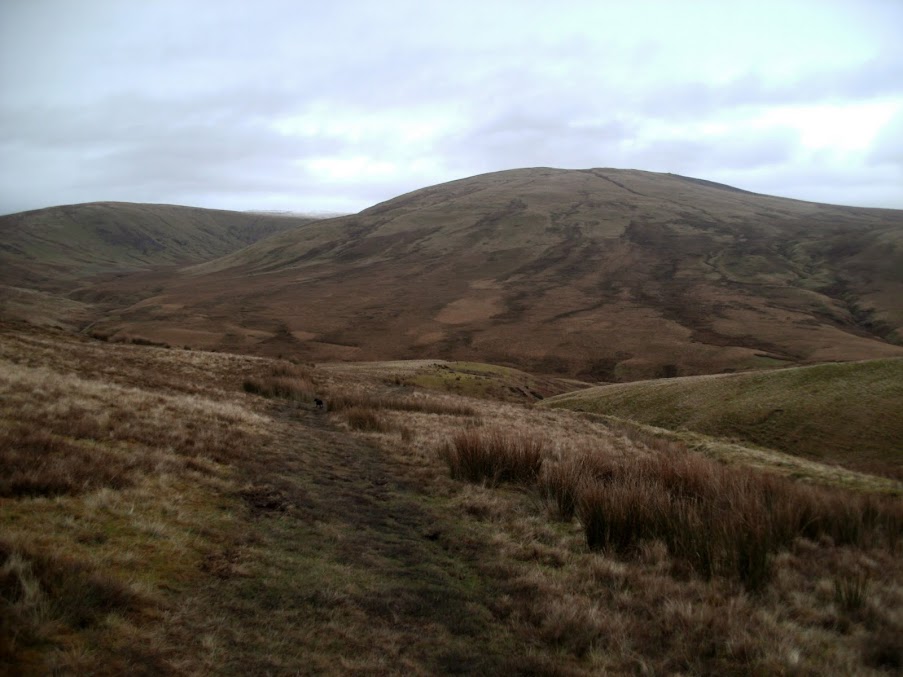 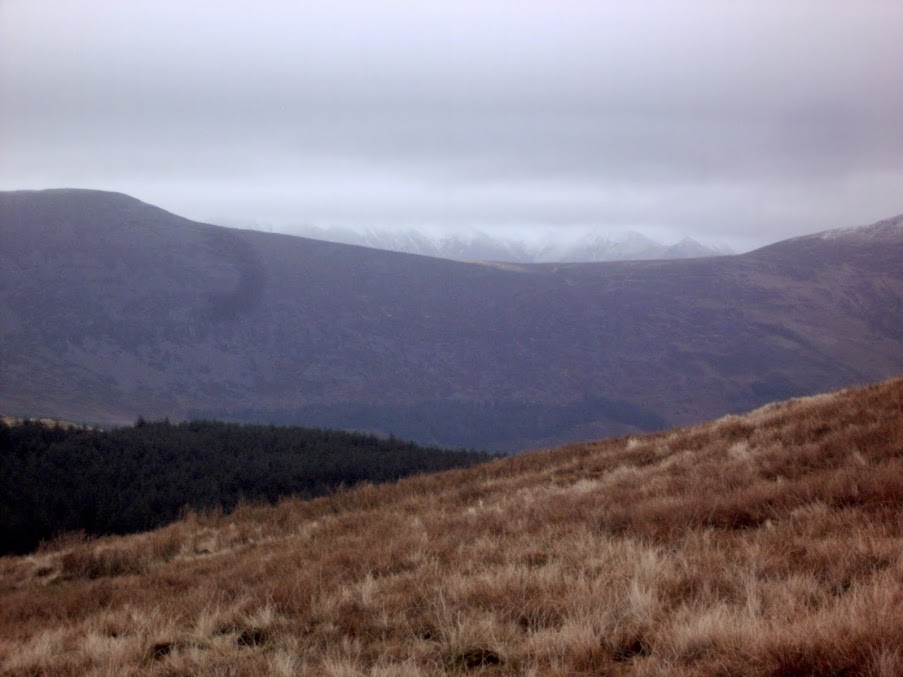 View towards Grike from flank of Whoap 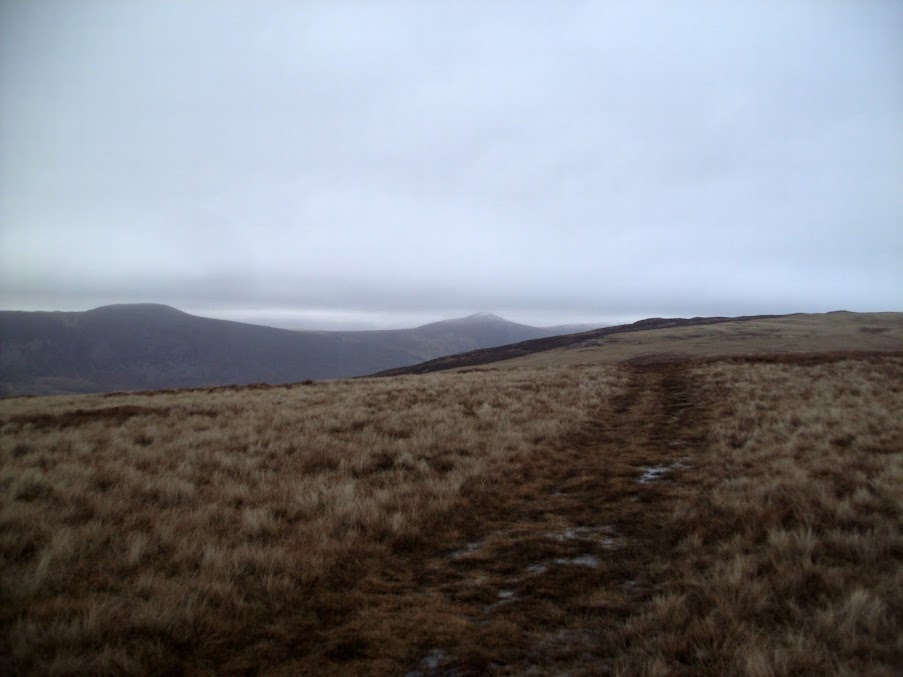 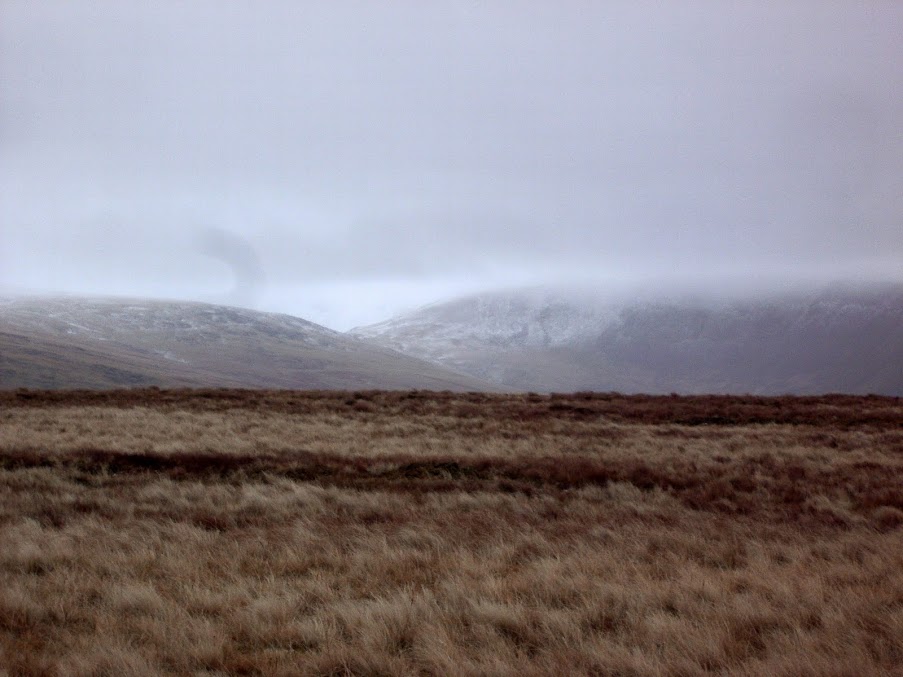 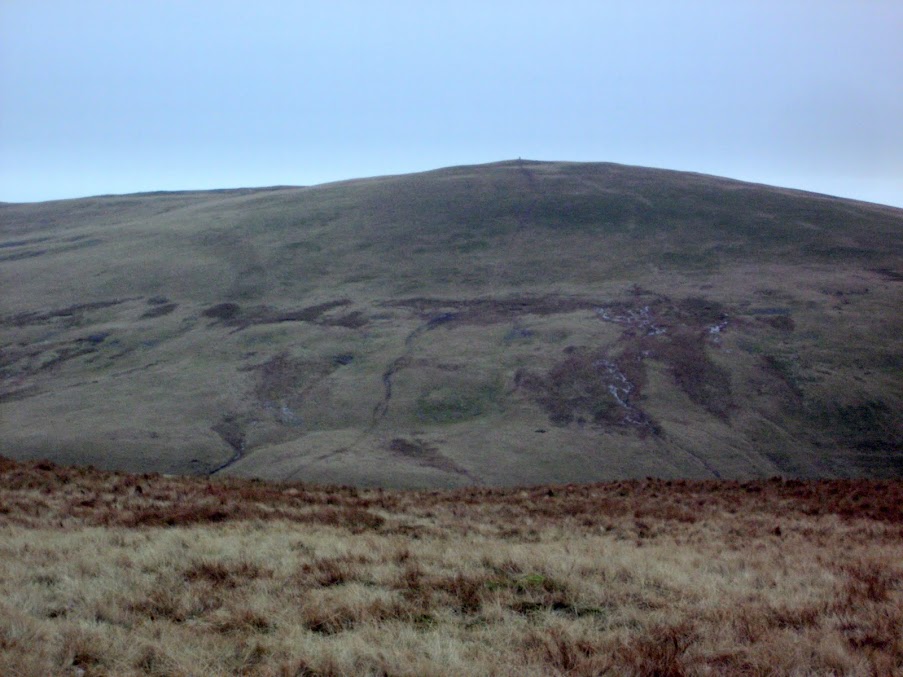 From Whoap I was contemplating heading for Iron Crag and maybe as far as Caw Fell or Haycock when the rainclouds snuck up on me from behind and forced me to change my mind. After protecting the backpack and donning my new fleece hat we dropped down to a little col heading over to Lank Rigg. The climb was fairly easy from this point and the summit was reached in good time. Damson had her normal photo on the trig point (she seemed happier on this one than on High Pike a couple of weeks back) and almost jumped into my arms as I went to help her down. 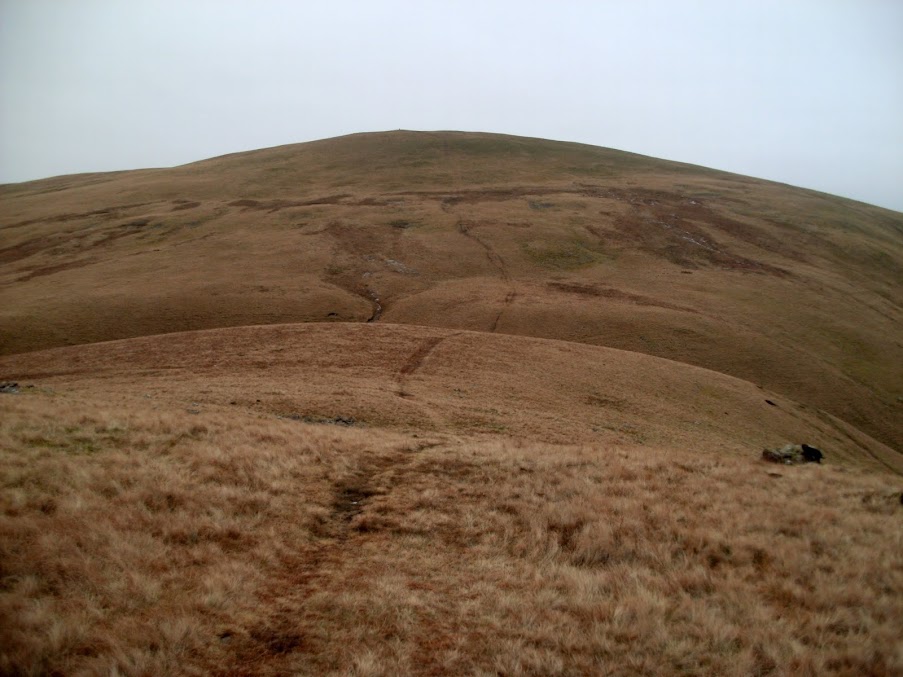 At foot of Lank Rigg 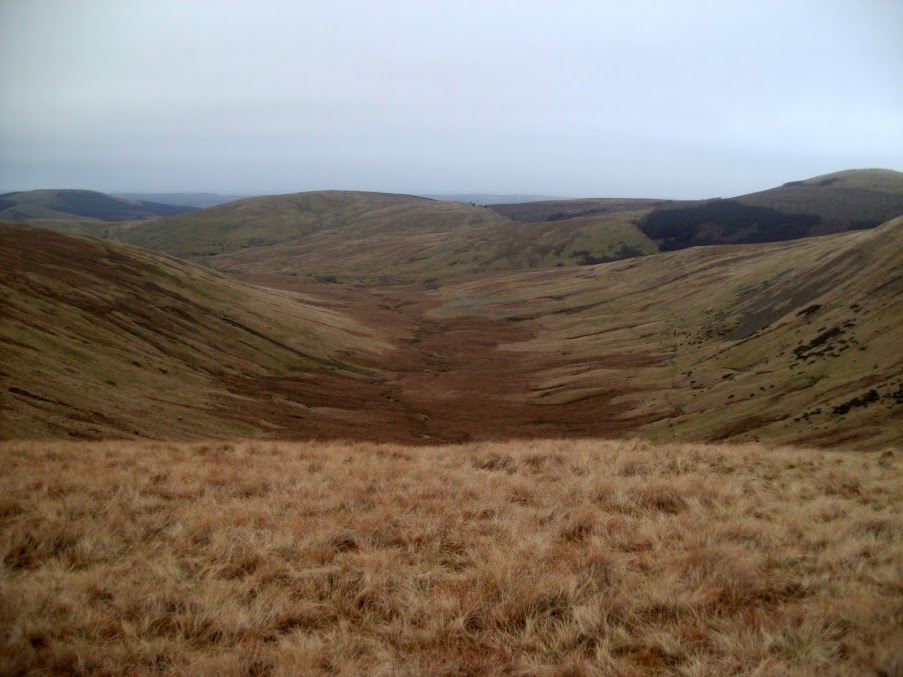 Looking back down Whoap Beck 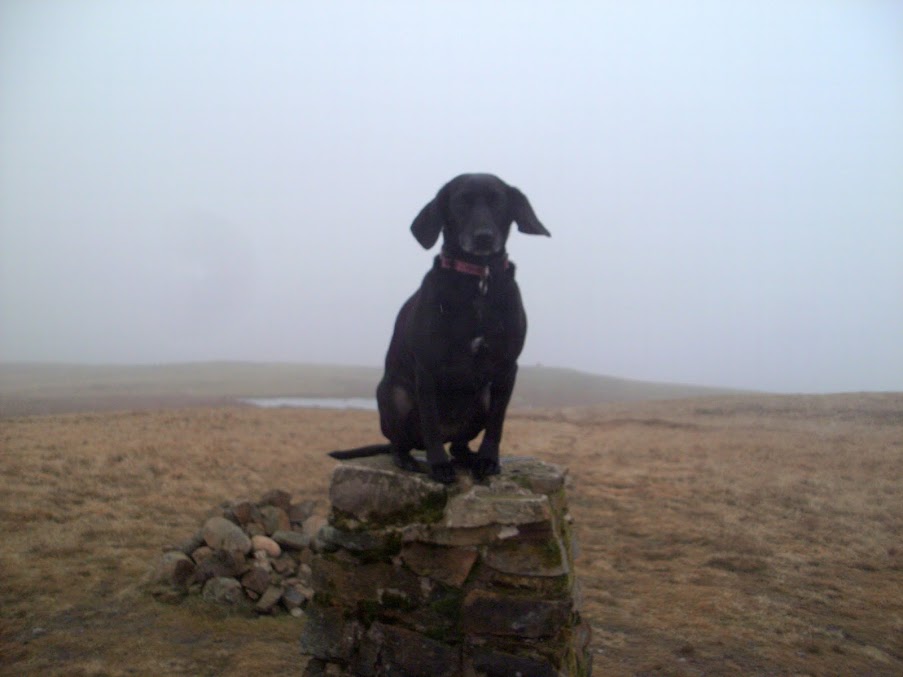 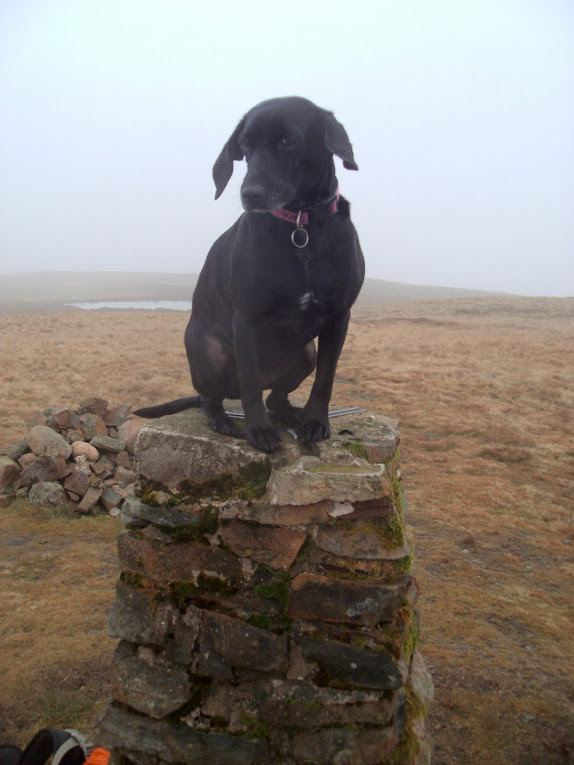 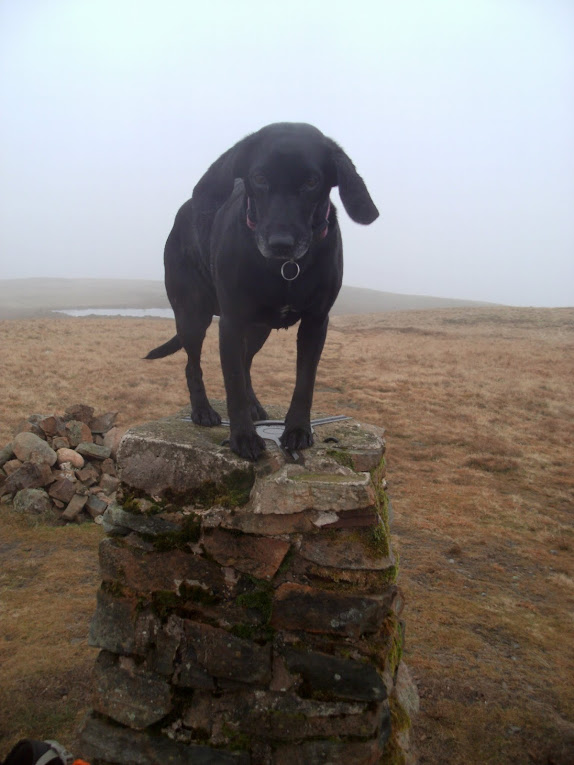 The ground had been pretty wet for most of the trip so far but the worst was yet to come as we descended back towards Calder River over Kinniside Common. The lower reaches of the fell were true bogland and well over the top of my boots on many occassions. Crossing the river was to be the wettest bit though. We traversed the river edge back up to meet our original entry point trying to get across without success. After getting so wet in the bog I ended up just wading through the river in the end (up to my knees with Damson paddling along beside me.)

I have never been so glad to get back to the car and get out of the rain and some of the wet gear. I think Damson felt the same as she ran straight to the fire on reaching home and hasn't left it since.

Glad this is ticked off as I don't imagine I'll be up that way again very soon.

no snow on the tops either which is a disappointment, but at least Damson is back to enjoying herself again.....even if she did hog the fire once she got home

I've always loved the name Whaop for a Fell. Doesn't look like there is much else to love about it however

Well done for dragging yourself out of bed and making it to the hills, another one ticked off mate

Like JK, I've always loved the name Whoap and keep meaning to look up it's origin

I often go and photograph the stone circle at Kinniside and, the road from Ennerdale Bridge to Calder Bridge is one of my favourites for the views in all directions

That was the plan but all the rain overnight made it wetter than I had anticipated and no amount of frost would have frozen the bog land by the river. If venturing up that way, ensure you retrace your steps and come back round the valley.

no snow on the tops either

Quite a lot of snow on the biggies around us and Haycock looked like it had a smattering but hadn't reached down as far as the 1500ft mark.

I've always loved the name Whaop for a Fell. Doesn't look like there is much else to love about it however

Whoap is a great name. I like Whoap Hall just outside Kirby Lonsdale aswell. Sounds like it should have a tongue twister made about it. I agree that there is little to love though, especially in raincloud on a cold and wet December afternoon.

Not on Saturday Susie, it was fine as we set off but the raincloud prevented any view more than about 50m (sometimes as bad as 10m). I felt quite lost at one point coming off Lank Rigg back towards the river with the banks of another huge fell between me and the road. It was mist and horrible weather that forced us to turn away from this fell last time we were up here too.
As you say though, it's another off the list and into my last 30 now.

Great Report Phoooey...didn't recognise Damson without her coat!! As for the boggy stuff.....tell me about it..has kept me off the moor the last few weeks...still not enough frost down here yet!

It's always a bit damp around Lank Rigg.

I've climbed the damn thing twice now (even though I'm only at 57 Wainwright's). It's very local to me is the excuse I can offer for such odd behaviour.

I do it quite like it out that way though, it's very quiet indeed and you will barely pass a soul on these fells at any time of year (as opposed to the hundreds I passed on the Fairfield Horeshoe).

Did you look for the coins hidden on the rock. AW started this tradition and walkers now tend copy him.

Did you look for the coins hidden on the rock. AW started this tradition and walkers now tend copy him

No Footix2, I completely forgot it was this fell. There is no doubt that it is a beautiful area. I guess I've just been unlucky with the weather and wandering about in the wet and cold in a bog is never good. Still not as bad as Great Mell Fell that I did at the end of a long wet day where the end never seemed to come into sight. We went up it the wrong way too through a never ending bog.

Can all Damsons fan club please vote for her using the following link. She wins an array of dog treats and a night in the Damson Dene Hotel (after which she is named ... as Ellie and I got married there).

Thanks to all in advance !!