Another Wainwright bagging trip, firstly to Lingmoor Fell an odd little hill in Little Langdale then on to two more little ones that Iād never heard of till I consulted AWās āSouthern Fellsā namely Black Fell and Holme Fell.

our_route.gpx Open full screen  NB: Walkhighlands is not responsible for the accuracy of gpx files in users posts
Mick and his son Dan were my companions for the day and with Dan just about to go to Uni, I wondered why Mick was carrying the rucksack, deciding that Mick probably needed the exercise and was frightened of being parted from his lunch if Dan set off like a demented gazelle.
In the event Dan proved to be an excellent companion and the butt of many a āDadā joke specifically designed to provoke embarrassment.

Little Langdale is a difficult place to park the car and so it should remain and so it proved; as two trips up and down eventually yielded a spot on an almost vertical slight indentation on a bend!
A bit of āitās got to be up hereā followed; before we found the path leading off a lane and on to the fell itself. The rest of the walk proved uneventful, clearly marked and surprisingly gentle for the Lakes (not too steep!). Arriving on the summit I took another photo. 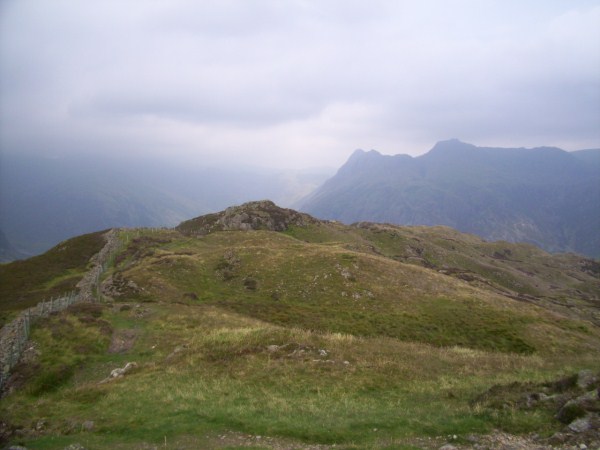 The view to the Langdales

I agree with AW it is āa colourful attraction the Langdale areaā (Southern Fells 1960). On the way down we found this wall and couldnāt help but admire its construction, it looked new but was probably well over 100 years old. I often wonder āwhy would anyone build such a wall in such a place?ā itāll keep me wondering for many a year yet I daresay. It warranted a photo. It took about half an hour to get back to the car and then retrace our route to the A593 heading for Coniston. We parked at Oxen Fell High Cross, well thatās what the map says.

our_route.gpx Open full screen  NB: Walkhighlands is not responsible for the accuracy of gpx files in users posts
Black Fell (1056ft or 322m) is marked as Black Crag on the OS map on WH, but it has a trig point! Always handy when ignorance of the area becomes a factor. Having failed miserably in taking the guidance of AW, we found a track to High Arnside Farm and duly followed it, but when we arrived at the farm had this sneaking impression that we didnāt have a right of way. Best schoolboy tricks and outstanding leadership skills sent Dan off to scout, he could run the fastest, and then we hastily nipped through a gate and legged it in the direction of our goal. The decision proved correct as we could see where we wanted to be and angry farmers had clearly taken the day off! It was then a āline of sight and follow what looked like a pathā navigation exercise, before reaching the summit trig point and grabbing a bite to eat. Black Fell: its the pointy bit

One or two families came along as it was school hols and southern accents accompanied our lunch, a good starter hill and the views down to Coniston and Tarn Hows werenāt too bad either.
Following what appeared to be the right path we got back to the car and drove down the road a bit to where there was a National Trust sign saying āHolme Fellā, at 1040 or 317m it isnāt the biggest hill in the Lakes.

our_route.gpx Open full screen  NB: Walkhighlands is not responsible for the accuracy of gpx files in users posts
I was definitely having a ābad navigationā day as I completely missed the right turn from the excellent NT path and we had to retrace our steps for about fifteen minutes, much to Danās amusement (what goes around comes around). A short pull up through the woods and on to the open fell was rewarded with the final Wainwright of the day. Dan insisted on a photo of me and Mick but Iāve cropped the sight of us in shorts, yes it was almost hot! Me and Mick on top: Holme Fell A gentle meander back to the car and then off in search of beer. We ended up at āThe Shipā in Greenodd, yes, it is called that. Had a pint of the landlordās finest home brewed ale (micro brewery) it is good and worth a visit. Finally a visit to the chippy round the corner satisfied the hunger before the two hour drive home.
Another three off the list, a new area visited and on reflection a really good day out if a little unorthodox.

Now that's the way to fill a beautiful day in the lakes Dave, what a cracking trio. This really brought back some lovely memories of home for me. Love the use of the 'fastest runner first' technique too

I thoroughly enjoyed Lingmoor Fell last time I did it, though (where parking allows) I'd definitely recommend coming up from the path near Bleatarn House - in the last few yards before you reach the top the Great Langdale Valley opens up in front of you, it's a great reward.

Another nice wander Dave...looked a better day for it as well. Can't say I have clocked these fells before so might need to look at these next time I am up in the lakes!

Another nice wander Dave...looked a better day for it as well. Can't say I have clocked these fells before so might need to look at these next time I am up in the lakes!

garyhortop wrote:Another nice wander Dave...looked a better day for it as well. Can't say I have clocked these fells before so might need to look at these next time I am up in the lakes!

They are short in the height department, Gary, but I'm always amazed at the different perspectives they give of the big boys!

Really enjoyed reading about your day out

A lot of the lower fells have excellent all round views.