So, the whole reason I found myself wandering the great oudoors of Scotland throughout 2009 was because I'd volunteered to go on a Himalayan trek in November & had to get myself fit sharpish. What I didn't expect was to actually enjoy myself, early rises, camping & exercise who'd have thought!

Anyway I know this is a walk report so I'll not go into too much detail outside of the trek. Just quickly, the reason behind it was to support 10 young people who live in care (foster care & residential units) to complete the trek & raise money. We called the trip 'reaching higher' because that's what we wanted the kids to do both literally and figuratively!

So here goes with the photos, I'll keep the the commentary to a minimum & let the views speak for themselves. If I start going into any detail I won't be able to stop and this will be the longest report ever, so here are some key facts: we walked approx 120k over 6 days, climbing to about 4000 metres. Temp usually between 25-30 degrees during the day but went down to -10 at night for the highest 3 camps. Hope you enjoy, it was really hard picking 25 from the 700 I took! Can't remember this dude's name but he paid for the International Peace Pagoda to be built overlooking Lake Phewi at Pokhara. Mahesh, our head Sherpa looking out to Maccupuchare, the 'fishtail mountain' which dominates the Pokhara skyline. The bridge to the start of our trek! Water buffalo strayed onto our path several times, they look way scarier when charging towards you! Camp 2 - getting much colder when the sun goes down - plus you can just see the toilet tents! The jungle! Spider central, had to overcome that particular fear quite quickly. Steam rising from the jungle - now I understand how rainforests work. 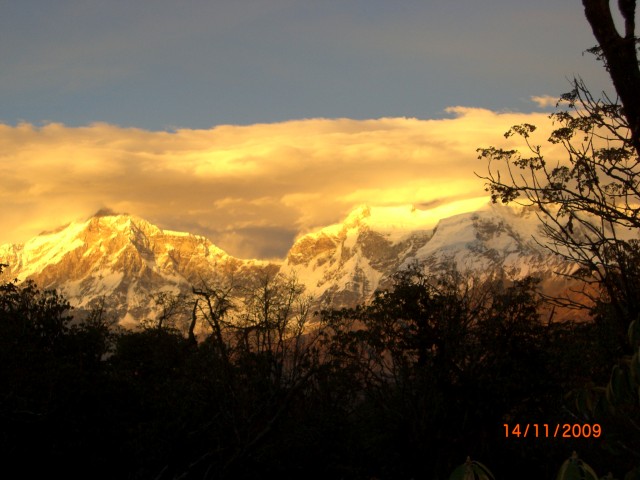 View from the sacred lake which was our destination - we all made it in one piece! View coming back down - you can't even see the bottom. View from camp 4 to Manaslu Himal Mahesh at Eagle View, you can see how high up we are looking down to the Marsiandi river. These guys were wee rascals, they were obviously the village cool gang. This little boy was a crack shot with his catapult - he appeared out of the jungle shot some fruit from a tree & disappeared again. The dodgy bridge to finish the trek, not for the faint hearted. After the tranquility of the trek, Kathmandu was terrifying! Mount Everest as seen from a flying shoebox! We got much closer but my camera died.

The bridges look great fun - however, some of the drops off the 'trail' look a bit scary! Were there any really hairy bits? (excluding bridges - I never find them scary)...

Still haven't got to the Himalaya yet...