I was lucky enough to benefit from the kind gift of a travel voucher from my mother in 2002. She had won this in a crossword competition as was her wont. I then asked a couple of friends if they'd fancy a subsidised trip to Lofoten and without hesitation I got two yeses.
This particular hill, Hermansdalstinden, was tackled towards the end of our ten or so days in north Norway and by that time we were a party of two as the third person had to return to Aberdeen the night before.
We actually started the day from the hut Munkebu which gave us a 400m start. However, this was still a fair old hike, particularly as we weren't clear on the route up. In fact we went up a very steep gully around the half way point and realised at the top that this was not the normal route as there were fixed ropes up the equally steep hillside further along the north east ridge.
Overall though there was nothing other than easy scrambling but on relentlessly steep ground. This culminated in a bouldery summit that has to be one of the smallest and most uncomfortable I have been on. There simply weren't any flat spots to sit down on, just jagged rocks. The view south is quite abrupt -nothing between you and the ocean apart from a reputedly near impossible knife edge ridge that's runs for a few kilometres out towards the next hill to the south. The views north and east are finer with lines of serrated ridges filling the horizon.
I felt a little vertigo on my wee perch there. Really, the view in all directions draws your eyes downwards towards steep drops. We were there around 8pm and expected sunset at around 10.30pm so we knew were going to have to descend fast to avoid scrambling in the dark. This we managed but we were pretty tired when we reached the hut and could only stop there briefly as our schedule required us get down to Moskenes and then along to A that night / next morning. Wow, what a lot of energy I had when I was in my thirties!
Not the finest mountain in the Lofotens but the highest on Moskenesoya and definitely worth climbing if you get the weather. view from the top, looking across Kirkefjord with Reine in view extreme right 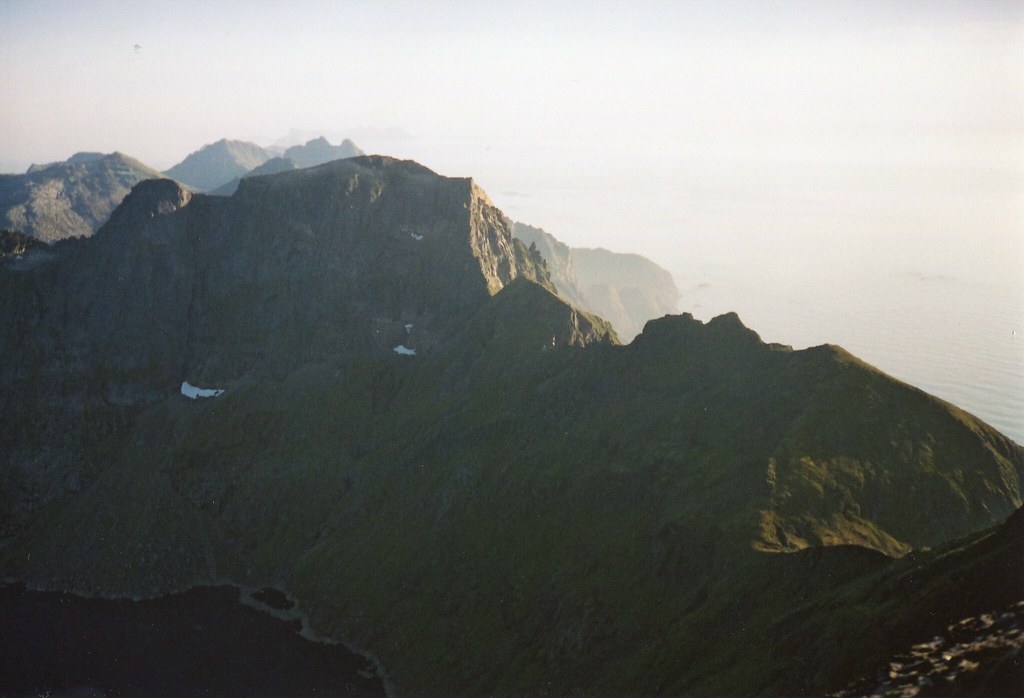 img016 by John Little, on Flickr
View south along a reputedly extremely difficult ridge. Doesn't look too bad here but if someone is saying difficult on Lofoten then I am happy to take their word for it. interesting light across the fjord with Seiltinden prominent in the background

Beautiful views from 10 years ago....hard to believe it's that long since 2002

The Lofoten Isles are another place on my "must go one day" list, They look like an extreme version of the Cuillin.

ChrisW wrote:Beautiful views from 10 years ago....hard to believe it's that long since 2002

Yes, it wasn't a very relaxed stop at the top, more a calculation of how long we could reasonably stay there and I still recall sitting on that spot feeling the drops behind pulling at me -quite a precarious feeling place what with there being no actual flat surface to sit on.
Last edited by litljortindan on Sat Apr 06, 2013 9:39 pm, edited 1 time in total.

johnkaysleftleg wrote:The Lofoten Isles are another place on my "must go one day" list, They look like an extreme version of the Cuillin.

The southernmost island, Moskenesoya, is the most spectacular but the next north isn't bad either and the mainland opposite is dotted with outlandish peaks: Stetinden, Tilthornet, Eidetind, Borvasstinden...

There's also very impressive scenery on the island Senja, 200km or so north of southern Lofoten.

There is a lot of rock and a lot of narrow ridges but also a lot of greenery.