On a hazy day, a long trek around the head of Wharfedale.

birks and yock.gpx Open full screen  NB: Walkhighlands is not responsible for the accuracy of gpx files in users posts
I’d put off this walk for a long time, waiting for at least half a dry spell before tackling reputedly far the boggiest of the Dales hills. Sometimes it perhaps helps to build up the worst thoughts about a route then, because this was a good day out and nothing like as bad as feared… The drive through Wharfedale is lovely of course, its head in Langstrothdale (and the first couple of miles of grassy climb from Hubberholme towards Yockenthwaite Moor – a clear route following gill then wall) wilder but no less so. There’s then half a mile of flat blanket peatbog, but at least the target trig is always in sight as a spur, and with a bit of ingenuity, long-jumping, and plenty of backtracking you can make it there clean-booted. I rather like this sort of challenge in small doses, but then I haven’t fallen in yet!, and in mist, without a clear end in sight and no hope of following a bearing across this terrain, I’m quite sure it would seem horrendous. Heading south from the top to its namesake hamlet, the upper moor is much greener and easier, quickly falling away into lush grass and some fun scrambles down lime outcrops. 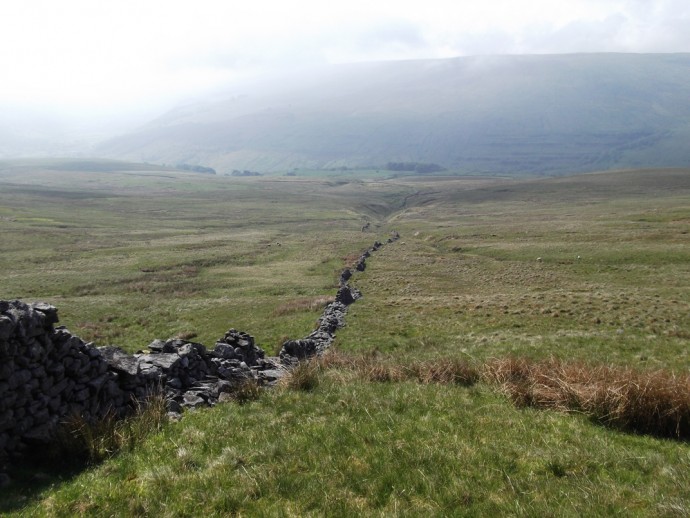 ... and back down, Horse Head in haze behind Yockenthwaite Moor summit, with shades of the 3 Peaks Back right down to valley level, it takes a little resolution to set off uphill again, but the bridleway up to Horse Head is a comfortingly good one, well-graded and with good views over the gash of Hagg Beck. A misty haze had closed in by the top of this climb though and, with none of the expected views to the surrounding peaks, the long miles along the flat ridge to Birks Fell – sometimes easy grass, sometimes damp, sometimes through short patches of worse bog than seen on Yockenthwaite Moor – can seem a little bit of a samey trudge. The summit and then Birks Tarn, bleakly grey today but still with an austere beauty, break this up, and then it’s a short walk on an improving path to find the track down. Yockenthwaite Moor rising over the hamlet Sugar Loaf, a rare landmark on the summit ridge It’s a nice way back towards Buckden, helped by clearing skies giving ever-improving views of the Pike in front and the upper Wharfe below: a relaxing end to a guardedly-good walk, if one to steer far away from in rougher conditions… Thats been a good walk.I did the same route as you for Birks, Starting and finishing in Hubberholme. ( in reverse). Must take some psyching up re-ascend from valley level!! I attacked Yock Moor from Stalling Busk to the North. You definitely had the best of weather, I never saw much on either of the days I did mine. Despite it not reaching the 2000ft mark the trig on Horsehead is a great resting spot.

Good effort Poppy, I have not ventured here to date and have heard some horror stories regards the bogs and peat hags.