Along the high frontier visiting a few tops.

Along the high frontier visiting a few tops.


Hello,
I came across Foggies report from Valais on the site. Part of his account is connected to both ends of my report
referred to as the Monte Rosa group of mountains. It seems that no mountain is this area bears the aforementioned name. From what I have found out, the Rosa appears to come from a local dialect name, rouese, which refers to glaciers. There are many of these to encountered during the walk. I had, perhaps, thought that the name came from the rock colour or from the sunlight blazing of the snow at times during the day. Since the terrain is between Italy and Switzerland many of the summits have two names, for example Signalkuppe/Punta Gnifetti and Schwarzhorn/Corno Nero. During the journey we spent a couple of nights at the Ayas refugio, two nights at Quinto Sella Rif. and two nights at the Gnifetti Rif. before descending the Grenz glacier to the Monte Rosa hutte.

The first part of the journey along the frontier with two Highlanders.
The route taken to the Breithorn summit was the same as taken by Foggie. 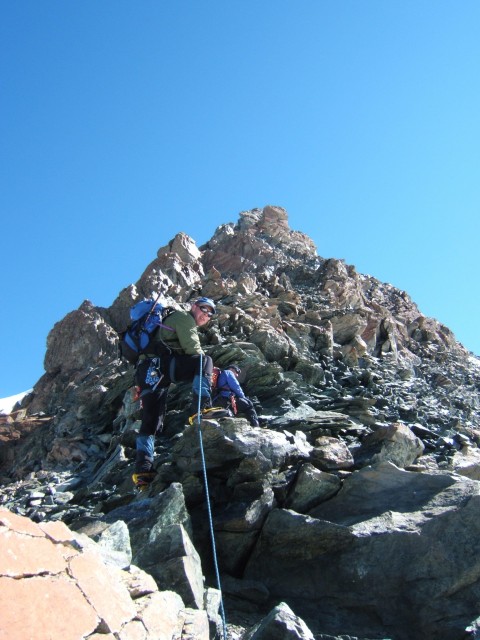 The corner has an 'in place' chain that the guides have constructed. 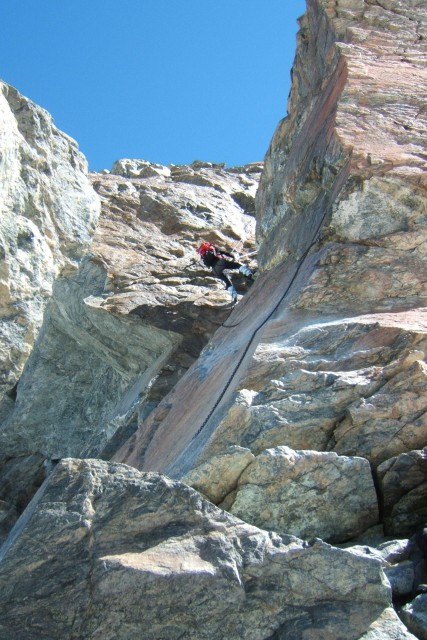 The person in the image was abseiling back down after visiting the summit. 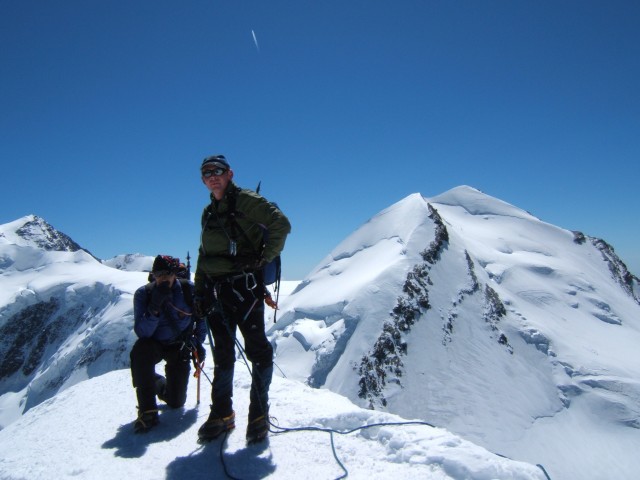 A good platform from which to see some of the route ahead. The madonna and child statue stand as guardian where the snow changes to rock. 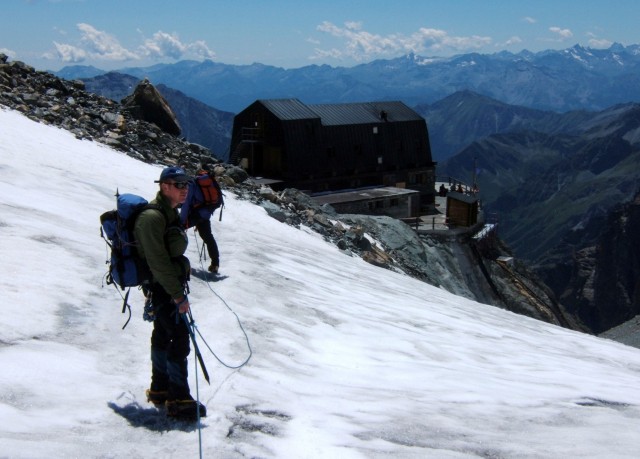 A pleasant, newish, and welcoming refuge. The Mezzalama Rif. is a couple of hundred metres down hill. 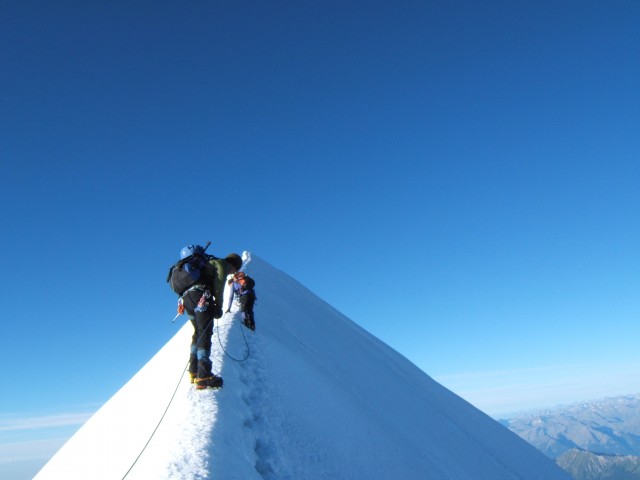 A beautiful snow arete leading to the summit. I think that it was on this day that we could see Monte Viso down in Piedmont...the celebrated sub 4,000 metre peak from which Will McLewin could see, and later ascend, all of the 4,000 metre peaks of the Alpes...see his book... In Monte Viso's Horizon. A cosy refuge.....as with Gnifetti, many folks come up from Italy to do single or more mountains rather than the traverse although there are many guided parties on the longer route. Lyskamm is big...the views from it are outstanding. Even finer outlook from here. 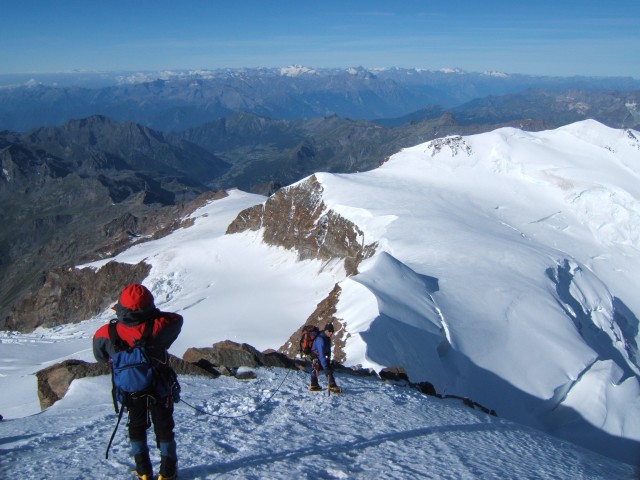 Approaching a steep bit...keep telling yourself to keep the crampons wide apart! 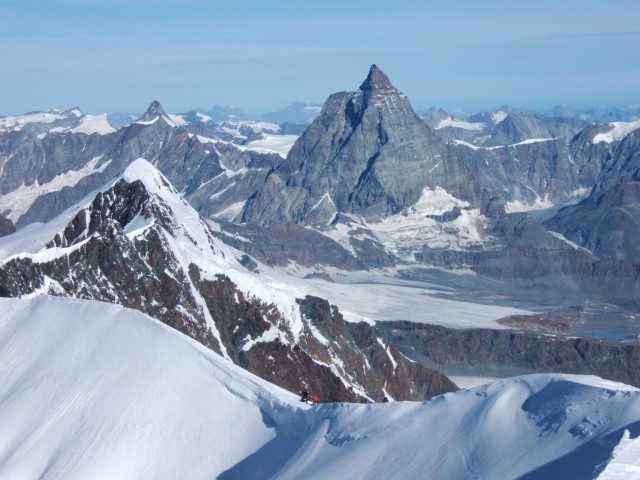 You don't really need a photograph to recall this view .... it kind of stays with you. I haven't been to Weisshorn...Don had ... and descibed it as one of the finest he had visited...as a consolation he took me up Zinalrothorn later in the trip...one of his very few missing alpine summits. A minor summit...but it does attract you...a rocky block with this wee building perched near the top...reach it, steeply, by ascending on big holds ....there is a rope to grab if needed. Schwarzhorn has a 50 metre plus steepish icy pitch from the snow up to the summit rocks. After visiting signalkuppe with its insanely placed summit refuge with the entrance just two strides from a quick descent into Italy. It seems difficult to obtain a bednight in the Margherita hut since guided parties and the weather scientists have it well booked up. Zumsteinspitze is a short distance away reaching the top by an interesting arete. This is a fine place to be in the mountains with Dufourspitze and Nordend behind. 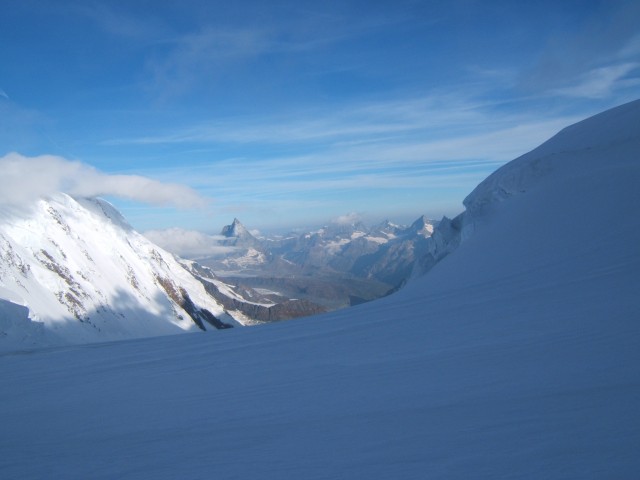 Our route out back into Switzerland. On this descent you have the huge bulk of Liskamm to the left and have Dufourspitze on the right. From here the dry glacier leads to a diagonal path to reach the area below where Foggie did his routes on the Riffelhorn. One of the best places to view these tops is probably from the ski/rail station at Gornergrat where, when up for skiing, we have counted twenty or so 4,000 metre peaks.

Brilliant - love to see a few reports like this. I've never been to the alps (and it is looking gradually less and less likely that I will at this rate), but I'm always interested in seeing pictures. A mate of mine did the easiest route on either Castor or Pollux (can't remember which, but was theoretically a walk) and said it was so icy that he nearly crapped his pants! And he was planning on doing the Lyskamm traverse...(he may have re-thought that one!)

Hello Malky,
I didn't get, unfortunately, to the 'big Alpes' until I was nearly sixty...but I did go out with folks who had been going out for many, many years and had a great number of trips under their belts. But I must say that on the five times I went out with them they always eased into the venture with a trip over a few days to the sub 4,000 metre peaks.....like from Arrolla over and down to Dix Hutte to traverse Mont Blanc du Cheilon and then over the Arrolla Pic to a refuge...then Bishop's peak ..then return to base camp. Afterwards up to the superbly placed refuge at the Dent Blanc col to traverse over the Grand Cornier to the Moiry Hutte. I think that I recall the so called smaller tops just as fondly as the bigger ones. What am I trying to say.....that each year there was an 'build up' trip 'the training' before going higher....never rushing to go too high at first. Also a multi day trip into the Oberland area from Grimsel Pass and another, again in the Oberland, when we eased our way over a few days towards the Finsteraarhorn. The journeys towards the summits are just as memorable for me....or on several occasions walking, uphill where there was ski uplift available, to increase fitness levels. Don't ignore the, so called, 'wee peaks' of the alpes.... try Grosser Diamantstock, 3,000mtr.+ from the Burghutte...a delightful couple of days out. I am one of these folks that enjoys the 'Hutwalk' ...the getting to the refuge...I know others that hate this bit......some of these are great days out when taken separately.

Great to see photos from the Swiss Alps, especially one of the chains on Pollux which I used during my ascent.
I don't have any photos of them as I was too busy watching what I was doing at the time.

Would love a trip back there to summit a few more 4000ers.

Fantastic!! Cant wait to get the Alps in summer even more now. That snow arete summit picture is tremendous.

nice pics thanks for sharing it

Utterly amazing pics. What a brilliant outing and great weather. If you didn't start in the Alps till you were sixty you must be very fit for your age.........what were you doing at 25 - the Himalayas? I also started fairly late on the Alps and have made several trips to the Valais, including traverse of the Matterhorn, but sadly not Monte Rosa. I think the 4,000m tops are in the past for me now, but I still enjoying seeing the pics and dreaming.

Fantastic pics you got there Gaffr. My wife has just reminded me that next year is our 20th year tied at the hip..... what she meant was that i had better have something nice organised come the time.

I would like to plan some kind of hill walking / hiking holiday abroad. Do you have any ideas for an inexperianced couple like us.

Hello Dave,
Don't have a vast repetoire of abroad stuff...a few Alpine trips but they tended to be of a few days high up then down and return to the 'base camp' at a camping site...if you let the folks at the site know that you are away for a few days they keep an eye on your 'stuff at camp' and only charge you a wee fee per day when you bring back the receipts from the refuge. What about the GR20 route in Corsica...fine 15 days worth of travelling along the spine of the island and never dropping below 900metres....can be a bit crowded at the refuges but we didn't get involved the that stuff by carrying our camping kit and buying some food en-route. Since going there I've heard that you now have to book or buy tickets for the refuge in advance but that could reduce your flexibility...can you still just turn up at the refuge area with tent without 'booking'? because of the tinderbox fire hazards on the island camping is only allowed at the refuge area...but for sound campers as we Scottish are

we didn't feel at all unsafe with our cooking arrangements at a couple of the cols for an overnight bivvy...choose the rocky stuff away from the dry vegetation. Water is the big problem though...all of the refuges are a bit off the 'spine' to allow for a water supply. HM's lot, being all French folks, have done quite a number of the long distance routes in France. Good for Euroland relationships etc....plenty of French, German, Dutch folks to converse with and very few English seem to come here

Gaffr
Thanks for the help. Will do some research into the GR20 route but not the 15 day traverse. i was thinking more along the 5 day mark. then relax for the rest of the time

I will get researching ASAP at various destinations just to get an idea of whats out there.