It's been a week or so now since John & I completed what would be my penultimate Wainwright wander (well, first time round anyway) and it took place on the first day of what has become our summer. The last 10 days have brought with them glorious sunshine and 2 christenings up and down the country.

With the forecast claiming the start of a decent weather spell we donned our boots but left the heavy waterprrof gear back at the car in deepest Wasdale at a little layby just off Netherbeck Bridge.
I had been here just a few weeks earlier with my Mum to tick Yewbarrow off the list and conditions couldn't have been much different. For a start we could actually see the top of Yewbarrow and despite setting off early, the sun was already blazing and burning away what little cloud cover the valley was clinging on to. 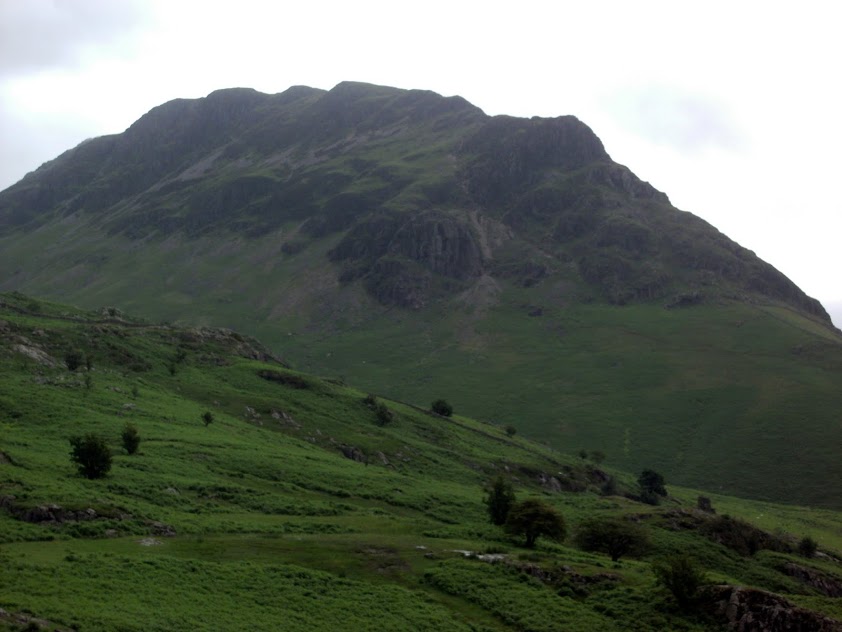 Walking below Yewbarrow as we set off from Netherbeck Bridge

The track took us initially up a very wet and boggy stretch to the left of Netherbeck before we reached the much drier & larger path that starts a little further south down Wast Water. The path was clear up the valley passing a number of small waterfalls as the water cascaded of the surrounding fells including Seatallen, Middle Fell & Blackbeck Knotts. 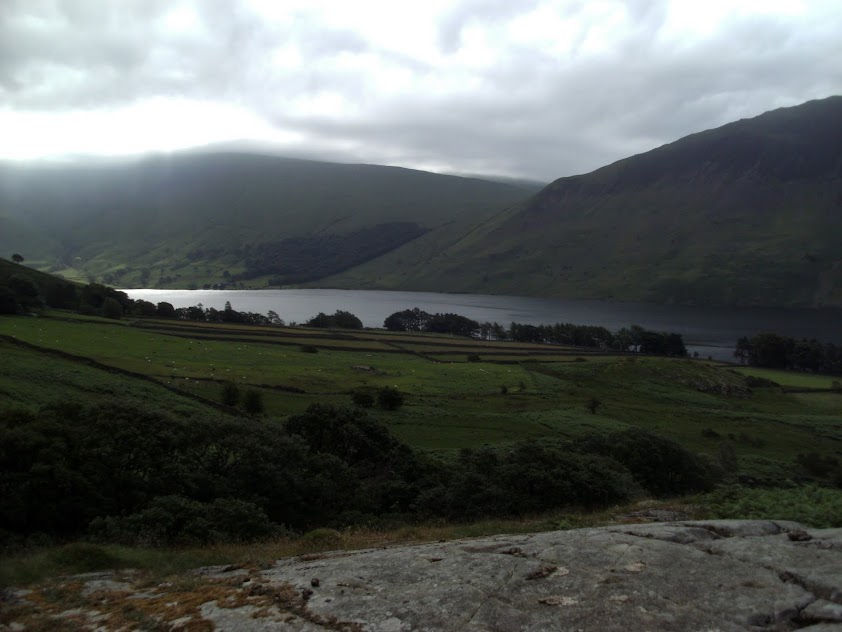 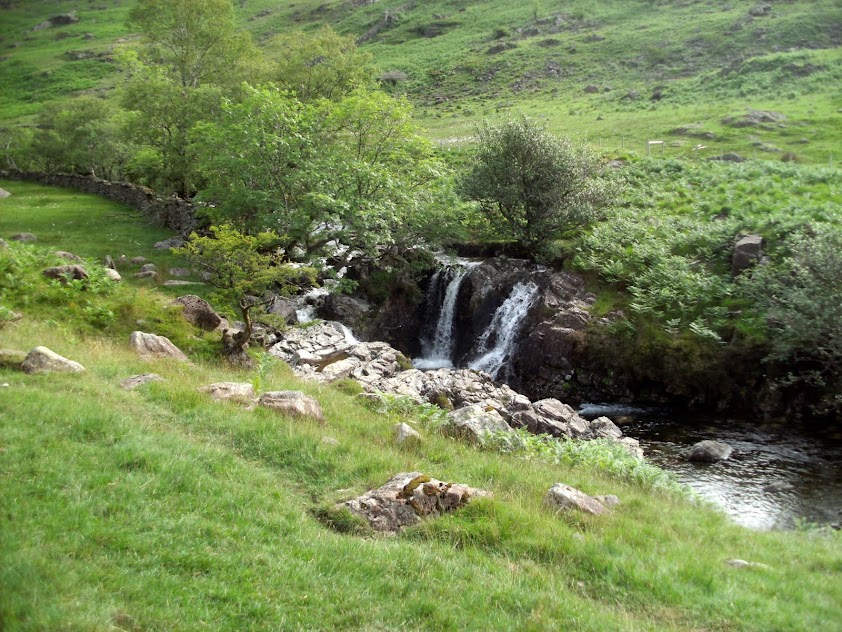 One of waterfalls along Nether Beck 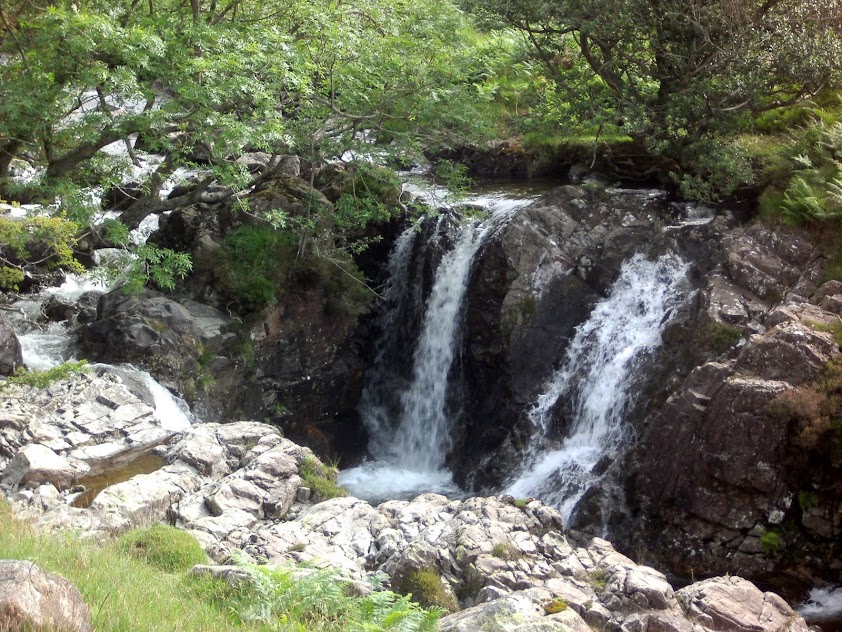 Zoom in on waterfall 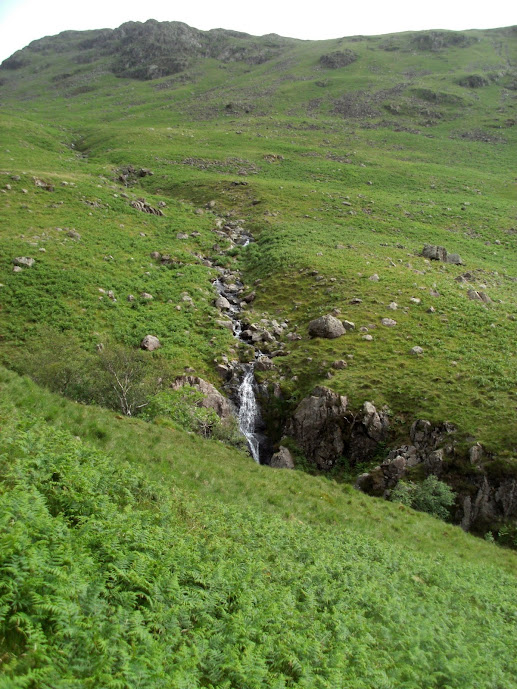 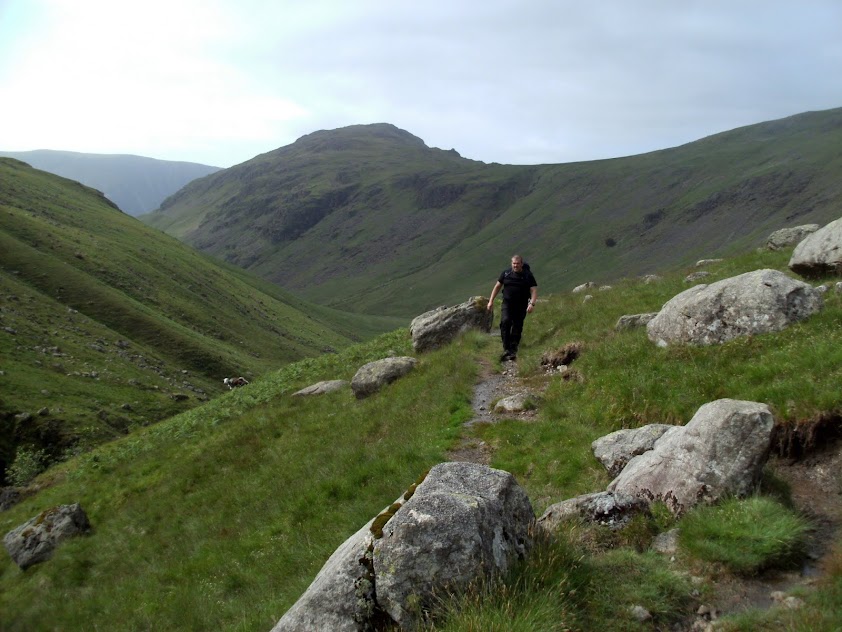 Under Great Lad Crag the path and beck turn right into the valley below Haycock and views to Scoat Fell and the water cascade from Scoat Tarn open up. 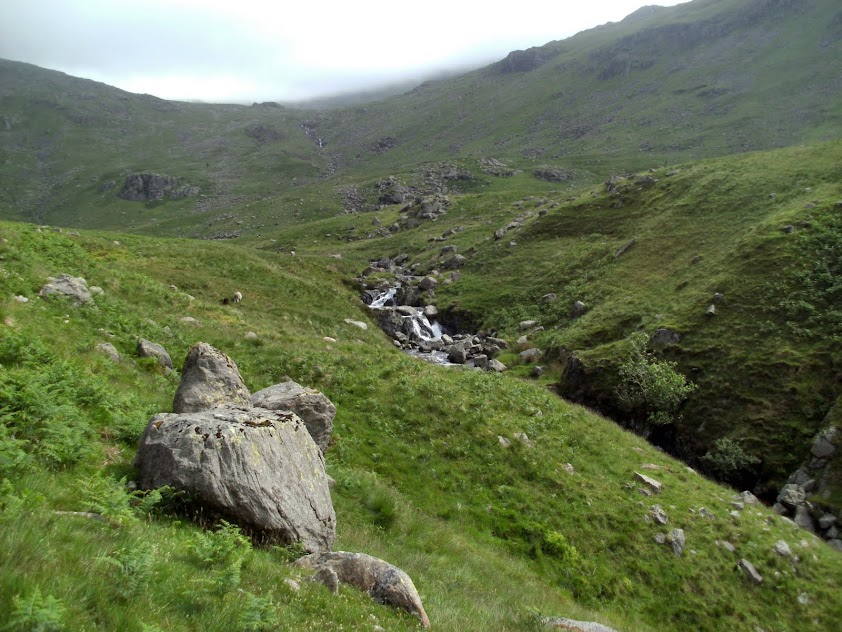 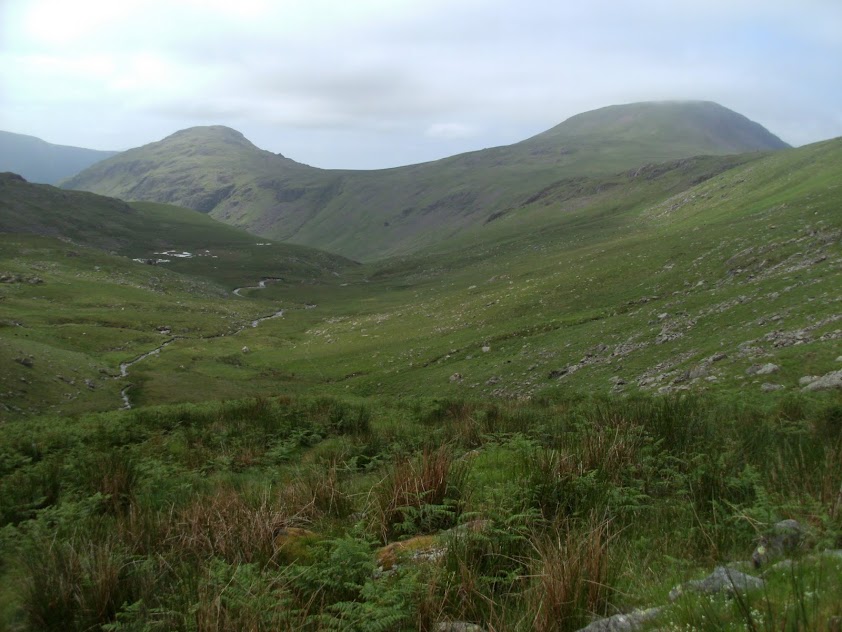 Looking back down valley to Middle Fell (left) & Seatallen (right)

Our path today headed up the steepish nose of Little Lad Crag and round to the left climbing up to the col between Scoat Fell & Haycock. The wind which had hardly been noticeable so far was rising as we climbed and as we reached the ridge it was fairly strong and we seemed to have climbed into the only cloud covering the whole country. The views out over Ennerdale were only just visible and somewhat washed out and got worse as we climbed left up to the summit of Haycock. 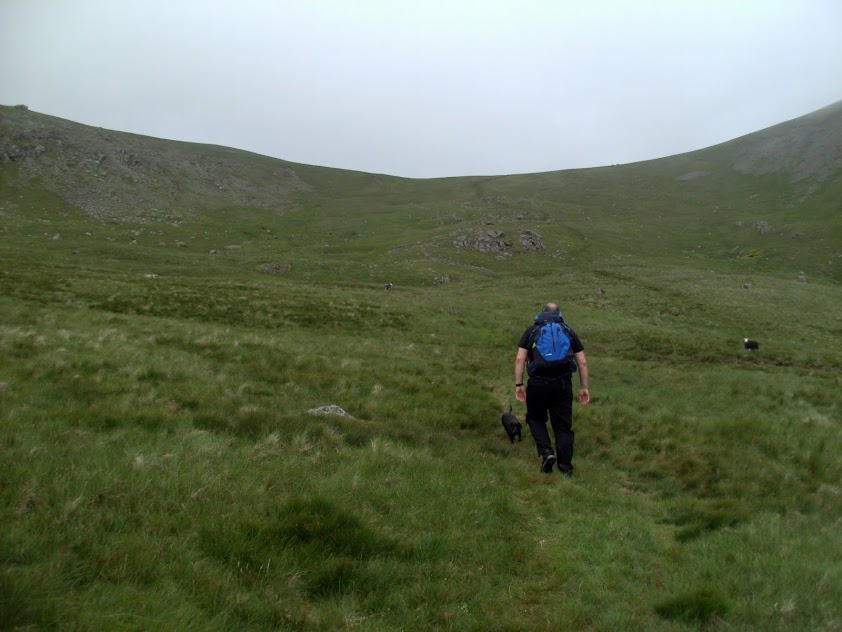 Heading up to ridge 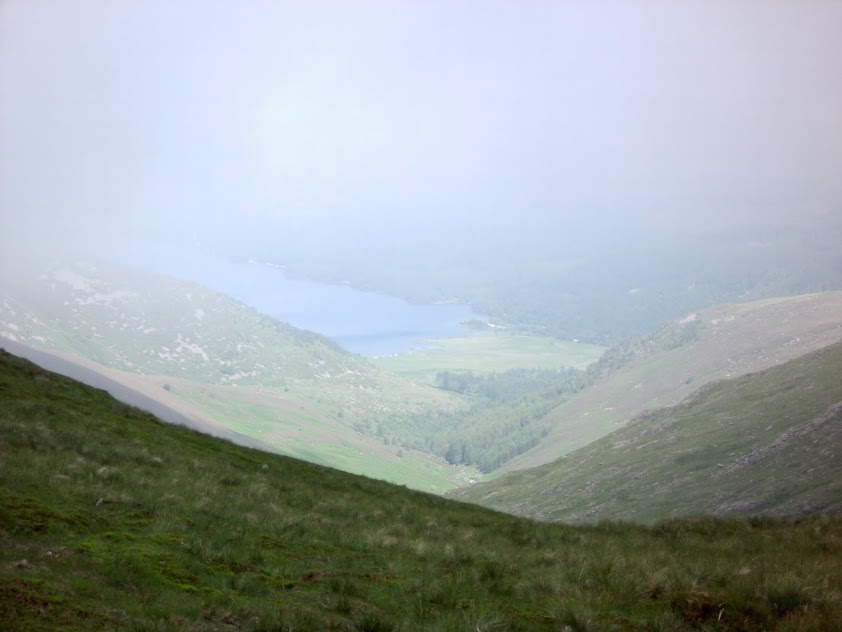 Washed out view over Ennerdale 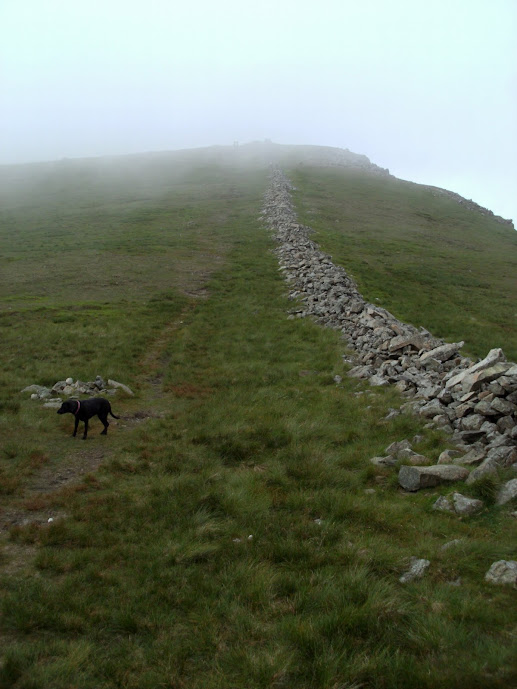 The summit was soon reached and after a few photos we pushed on along the ridge in search of #213 in Caw Fell. The rocky outcrop of Little Gowder Crag came as a surprise as it didn't really show as anything of a climb on my GPS and was shrouded by the cloud until we hit its flanks. It presented the biggest problem of the day as we made our way over the boulder strewn top and caused John some pain with his knee. The stretch to Caw Fell followed the rest of the wall over to its summit. 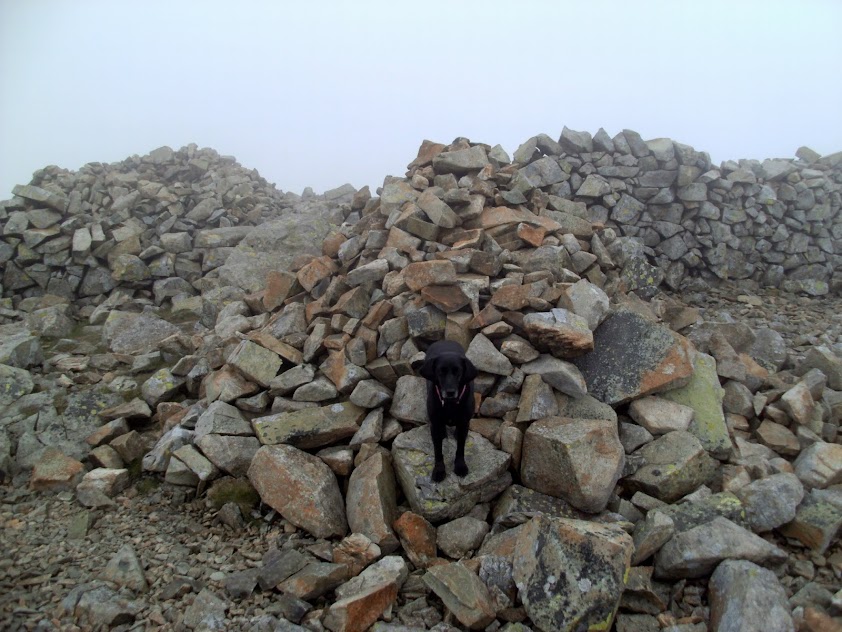 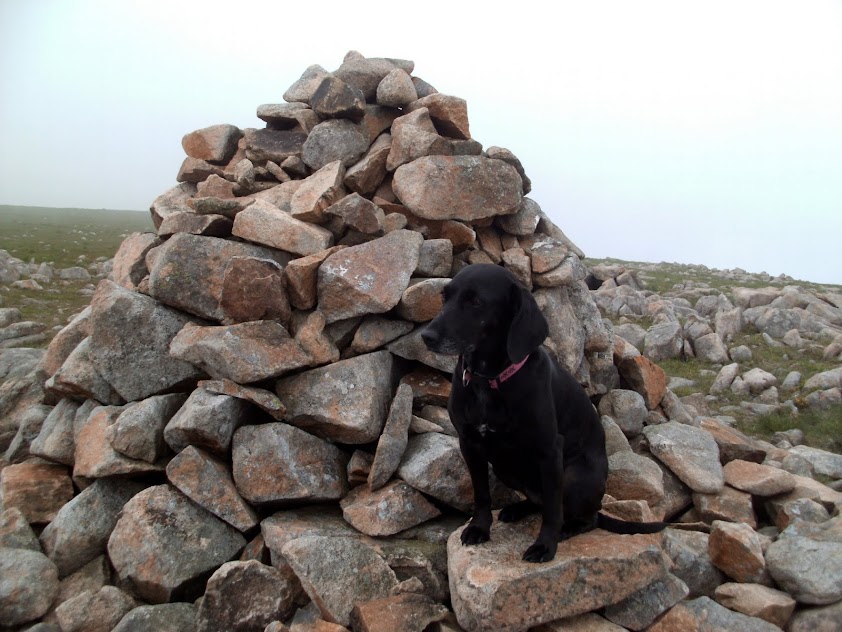 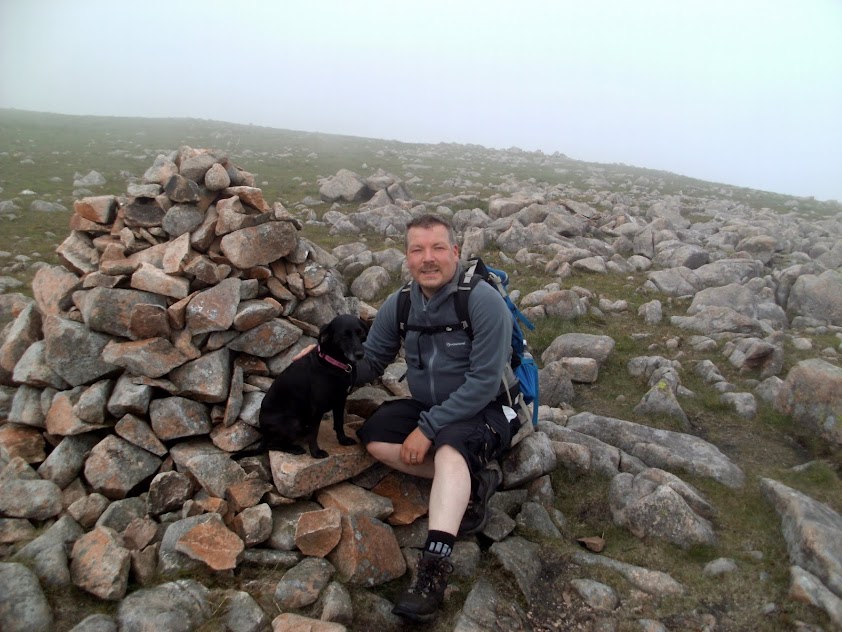 Damson & I on Caw Fell summit

Another few photos were taken before we headed back, this time going round Little Gowder Crag by taking a wide route to the right before dragging ourselves back up to Haycock and coming back down our ascent route. On passing Haycock summit, I spotted another cairn that wasn't visible on our first pass, so to ensure that we had captured the top correctly Damson had to pose once again. 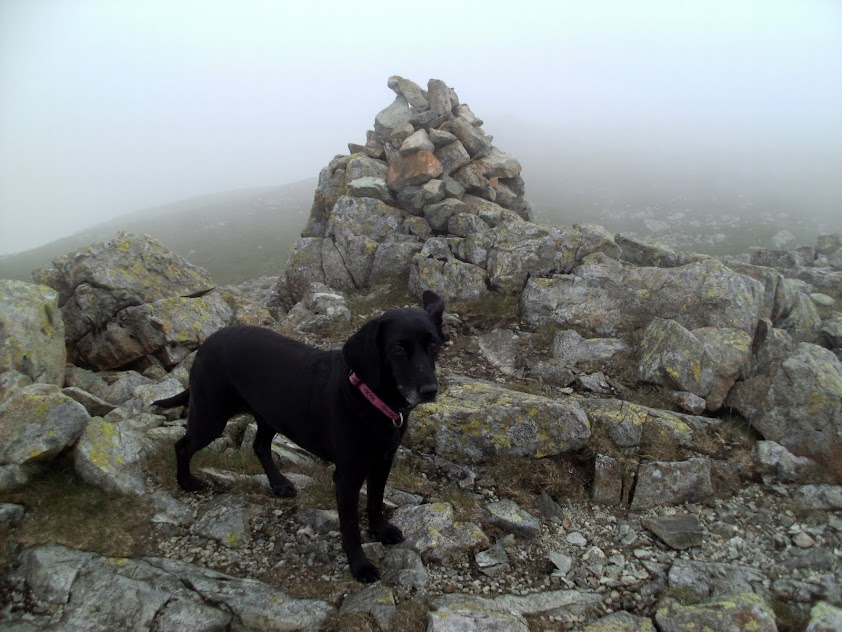 Damson at another summit cairn for Haycock on return journey 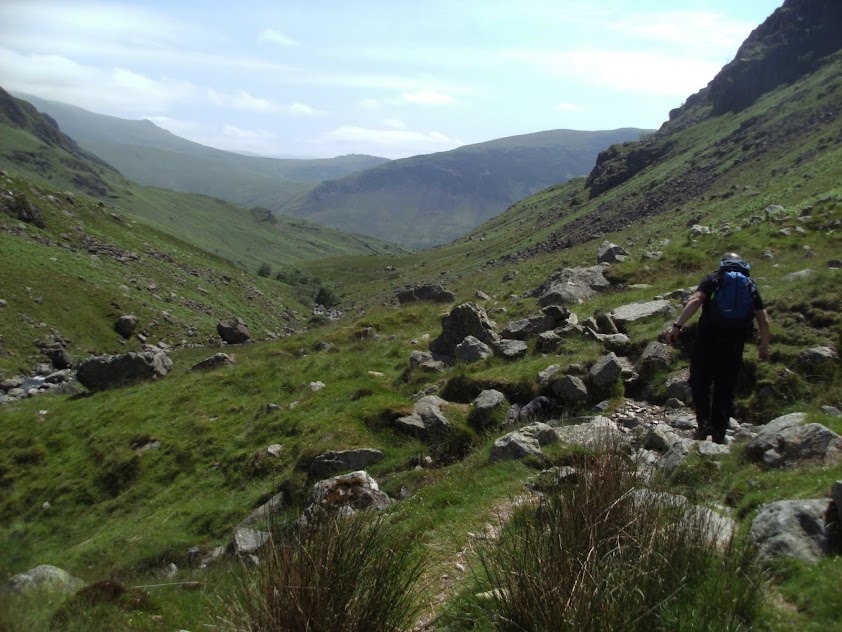 As soon as we dropped of the ridge the weather seemed to transform yet again and the walk down was bathed in sunshine and gradually getting hotter and hotter as we made our way back to Wast Waters shores.

The plans have been made for the finale atop the lovely Rannerdale Knotts and hopefully the weather will still be with us as we plan a 15 person Champagne picnic to celebrate completion of the 214.

Shame about the clag for what looked like a fine wander otherwise, hope you get a great day for number 214

I hope you pick a good day for Rannerdale

You know what the Lakes are like Chris ! It holds on to clag whenever it can

Especially at weekends when you find some time to explore

The cocked ear is one of Damsons favourite poses