Day 3 of our trip to the lake district was looking promising, the weather forecast was set to improve as the day progressed, giving us an excellent opportunity to turn our attention to a little more substantial walk. We had just had 2 days in the Western Fells, which were tailored to suit the forecasted poor weather. Indeed our second day over Gavel Fell and Burnbank Fell felt more like November than July.

Bowfell and Esk Pike were the chosen targets with of course the ODG in Great Langdale awaiting our return.

There was lots of activity today in Langdale with lots of people converging around the New Dungeon Gyll Hotel, and all appeared to be heading towards the Langdale Pikes which as always looked splendid today.

Our route took us up the broad ridge coming down towards Langdale called the band, which is a pleasant walk and not to strenuous. A little further up a decision was made to either follow the route via the three tarns or the much more exciting Climbers Traverse. It would have been easy for me to persuade my colleagues to follow along the Traverse, however before deciding I described in as much detail both routes. The majority vote was via the 3 tarns. I would have to wait for another day to walk the Climbers Traverse of Bowfell.

Progress was made fairly rapidly and in no time at all we were all sat at the summit enjoying lunch, there was god views over to Esk Pike which was our next objective, but the tops of the Scafells were covered in cloud. The route is straight forward between the two fells with a clear path heading to Esk Pike summit.

Esk Hause was our next coffee stop and amazingly we had the wind shelter all to our selves. The return route was now clear, we would be heading back under the cliffs of Esk Pike passing Angle Tarn and descending via Rossett Gyhll. The path has much improved since the awful scree path I remember a few years ago.

As always the ODG was awaiting and a wonderful pint of Jennings went a long way to healing a few aching limbs. The Head of Great Langdale The Band and a Welcome return 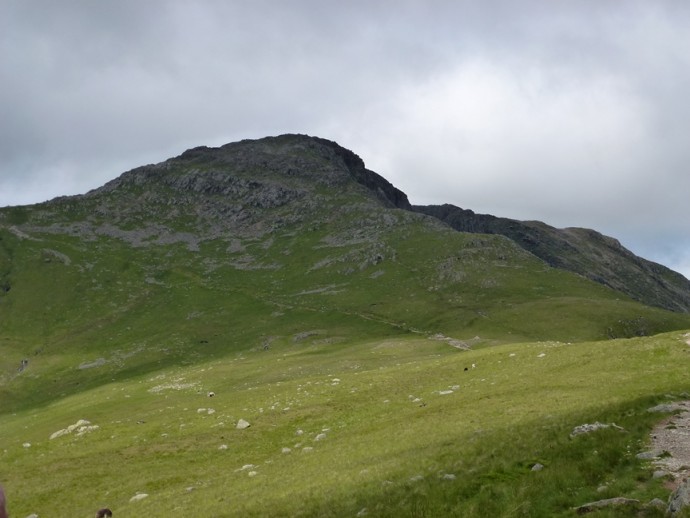 Further up at the top of the band, Three tarns which lie between Crinkle Crags and Bowfell A clear route towards the next objective..Esk Pike. The Troops sheltering from the wind

The traverse towords Esk Pike is pleasnt with great views Before dropping to Esk Hause another look towards the Scafells was performed in the hope that the cloud will have lifted, unfortunately not this time, however Ill Crag did show itself briefly. The path to Gt Langdale via Angle Tarn is a delight, I was not looking forward to Rossett Ghyll at this moment, however I was to be pleasantly surprised as the awful scree had been replaced by a very good path.. It was after all along time since I was last down this way. Looks a great route Geoff, I'm planning on bagging these two together with Rosset Pike, might just convince Nicola and Grace to attempt the climbers traverse however

Glad to see you all had another great day out, Geoff! Love the photos

I know the Band very well...........walked up it 4 times before the weather was good enough to complete Bowfell

god views over to Esk Pike