This board helps you to share your walking route experiences in England and Wales... or overseas.
Warning Please note that hillwalking when there is snow lying requires an ice-axe, crampons and the knowledge, experience and skill to use them correctly. Summer routes may not be viable or appropriate in winter. See winter information on our skills and safety pages for more information.
Post a reply
22 posts • Page 1 of 2 • 1, 2 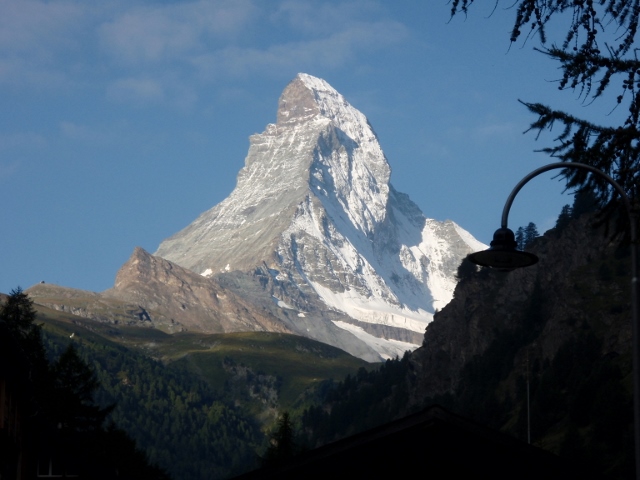 the matterhorn from Zermatt

cant quite remember the exact date, but harry asked would be interested in going to the matterhorn with him an an old climbing mate Nick ? well it didnt take me a second to reply yes. the matterhorn has long been an ambition of mine since my old friends bill and jed gave me an old video of someone climbing its north face solo, the helicopter footage of the climber walking the summit ridge toward the cross on the italian side was jaw dropping, something i thought was beyond my realms of hillwalking . but now ive got a chance to attempt to replicate that finest of summit walks between the swiss and italian tops and get the ultimate picture beside the cross on the italian side.
Nick took to do with most of the planning, flights, digs etc. while we all got together as often as possible training for our attempt . the route chosen was the north east ridge or the hornli ridge as its known. its 1220 metres of ascent from the hornli hut, which is the normal place to stay the evening before the climb. training went well, pinnacle ridge on skye, the chasm on the buachaille and eagle ridge on lochnagar all climbed with big boots being the highlights.
in no time we were heading to our base in Zermatt and after setting up camp we headed up the cable car to testa grigia (3460m) our destination was the val d, ayas hut, our base for 2 days to acclimatise. we climbed three 4000 metre peaks, heading back to our campsite in zermatt on the monday. with weather checked wednesday was the day we were going to attempt the ridge, travelling up to the hornli hut on the tuesday afternoon. we awoke on the tuesday and phoned the hut to book a space. its full till saturday was the reply ! what were we to do ? we had came all this way. a bivvy was the only option. so we got what sorted and left zermatt in the afternoon, the sun was scortching the tempreture 28 c.
we got the cable car to schwarzee (2580m), there wasnt much said on the cable car, the thought of the bivvy, the climb, the descent going through our minds. this was it we were on our way. 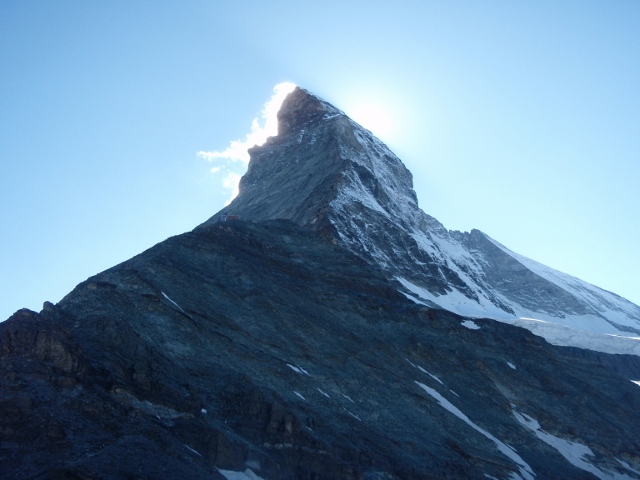 the walk from shwarzee to the hornli hut takes about 2 hours, we took our time soaking up the views all around but always looking at the ridge ahead. as we were approaching the hut a helicopter was lifting two climbers from the ridge dropping them at the hut as they had gotten into difficulty ! there was a sign directing campers round the back of the hut, it led to a flat area of scree with little sections walled off , we were lucky to find an unused site and set about getting ready for the night ahead. 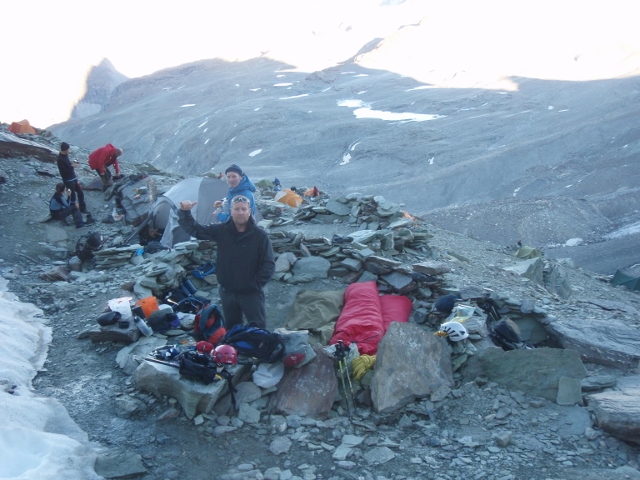 harry and nick at bivvy site

it was beautiful, lying in my bivvy bag watching the sun set, then staring at the stars. i found it difficult to sleep, it was cold, and when i did fall over was awoken by a big rock fall on the east face then some climbers heading off really early.
we woke at 4am, the plan was to start at 5. we got to the start and there was a que ? eventually at 5.15 we started to climb the fixed ropes that help you up the first 20 or so metres. there was an endless line of head torches in front of us, and all we done till light came up was to follow one of the guides in front of us. it was dark, we could have been climbing anywere , and with the altitude and pace it was very tiring. the sun eventually crept up over breithorn, lighting up the top of the matterhorn with a orange glow. 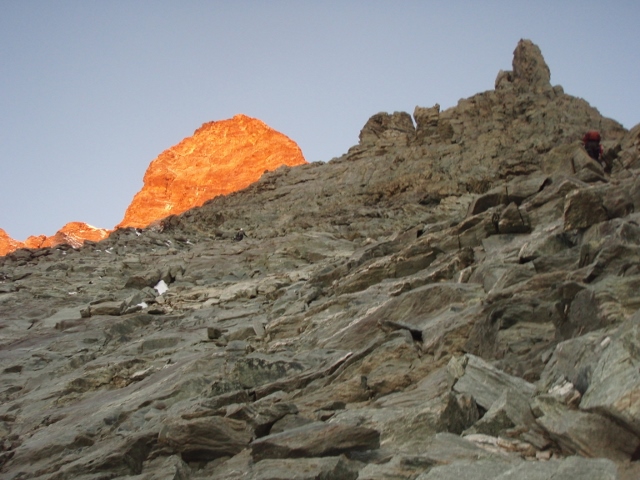 sun lighting up the matterhorn

we eventually of sight of the solvay huy (4003m) and climbed the lower moseley slab which leads to the hut were we stopped for a brief rest. 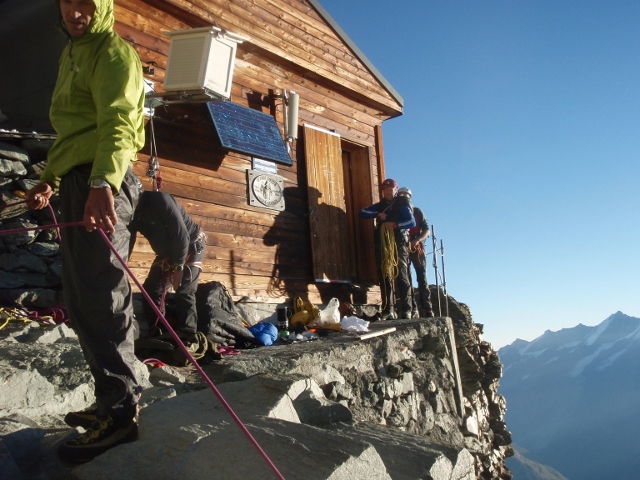 the climbing from the hut gets a little harder, you first climb the upper moseley slab for about 60m when ther ridge really starts to steepen and narrow fixed ropes again help you up another steep wall to the start of the ice field below the shoulder. we put on crampons and climbed the slope to the shoulder, by now we were getting heavy traffic of guides with there clients descending. it wasnt fun as the guides hurried and lowered there clients down barging and bumping anything in there way ! i was nearly pulled from a rope, nearly had a crampon land on my hand and had words with a couple of guides who removed our protection from the stantions to lower there clients !
eventually we reached the shoulder (4250m), were another steep section of ropes were encountered, it was a toil getting up these fighting for rope and rock with all and sundry. after the last steep roped section the rock gives way to a steep icy slope which zig zags up and up. the traffic coming down now ceases and i can see the statue of st bernard which i no heralds the summit. 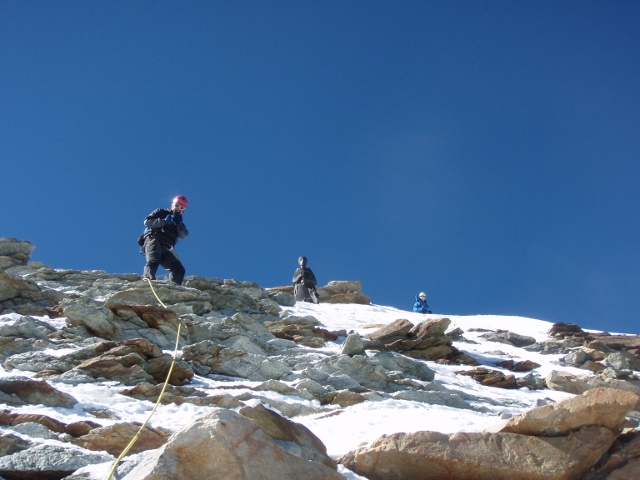 harry and nick at statue of st bernard

we all catch up with each other at the statue and make the final few steps to the summit together.
then were there the summit of the matterhorn ! we hug, take some pictures and take it all in, its fantastic, and there is no one here ! 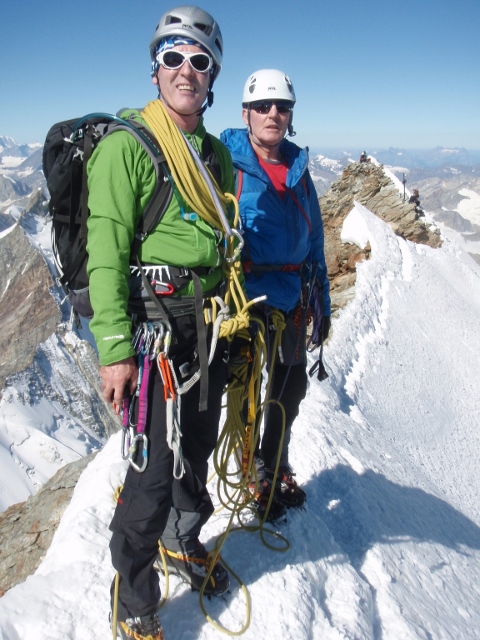 me and harry on the summit 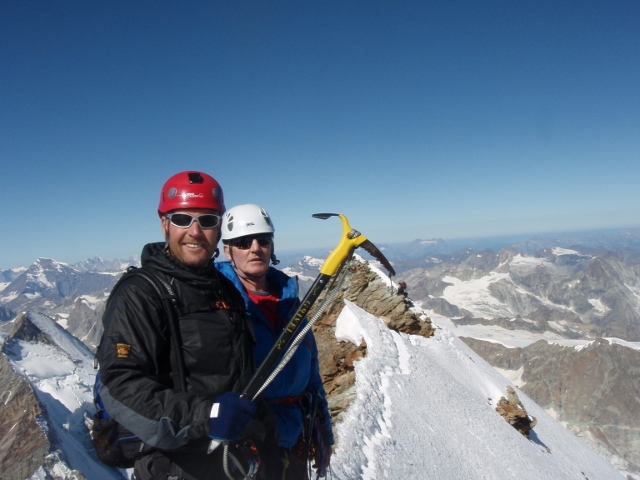 harry and nick on the summit 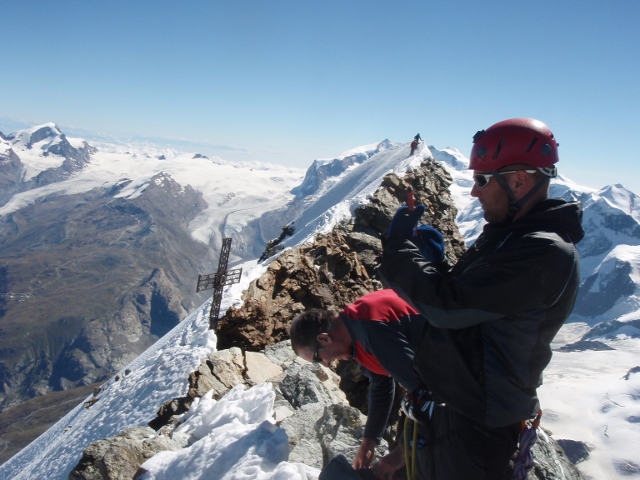 harry and nick on italian summit 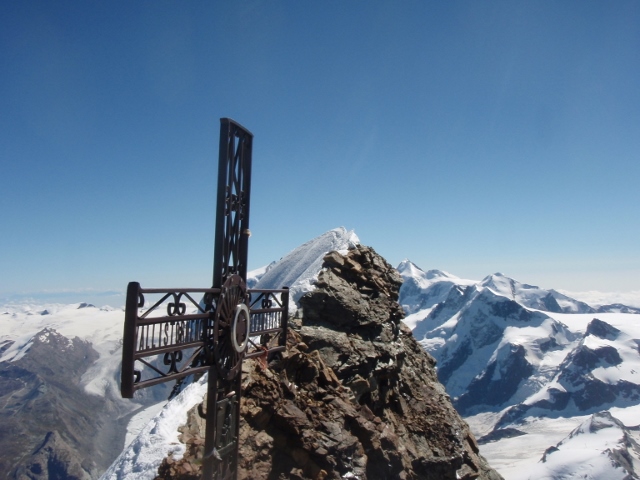 my only complaint was my camera took the huff on the summit, i had to get my phone from my rucksack and start it up, but i got my picture with the cross on top of the matterhorn, an ambition fulfilled. 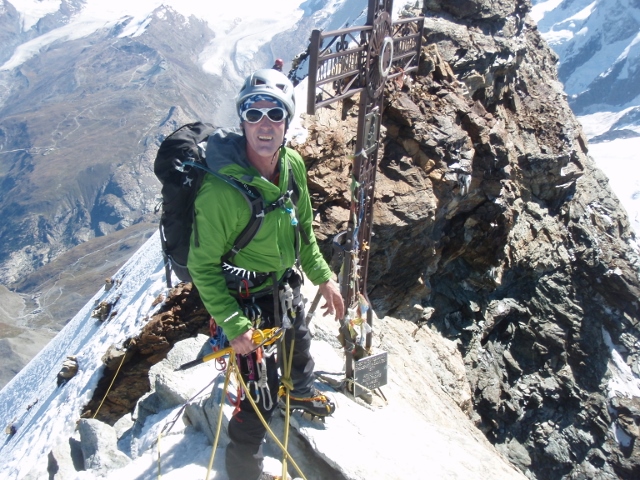 me at the cross on the italian summit

we hear then see a climber come up over the crest of the south west (italian) ridge, and thats our que to leave the summit and start our descent. 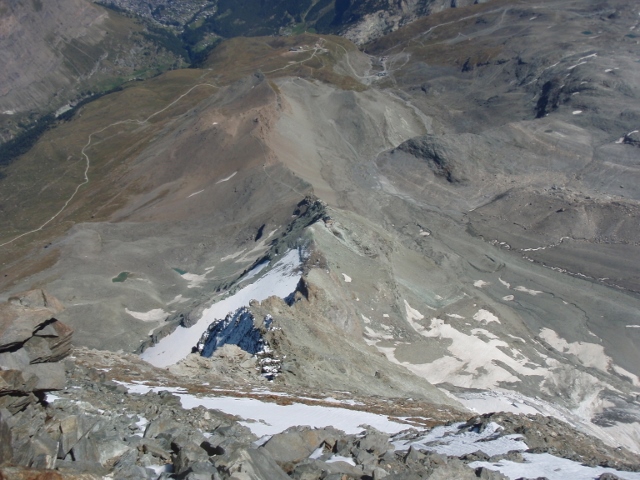 now to get down !

its long, its slow, its tiring. it seems an age before we get to the solvay hut were we again stop to eat. the down climbing eases after the solvay but the exposure down the east face never relents and you have to concentrate fully every move. it was with relief to reach the final fixed ropes that marked the end of the climbing. we got back to the bivvy site at 7 tired, drained but extatic. we decided to desend to shwarzee , i was on my last legs as we reached the cable car station, we new it was shut and that the first was next morning at 8.30, but we were 1000m lower and would be more comfortable bivvying on grass. there was a hotel next door were we had some soup and a beer before crashing out. awoke to the most spectacular views of the matterhorn, and the sun rising again over breithorn, our plan was to catch the first car down at 8.30, but we sat there for over 3 hours watching the sun light up zermatt and us soaking up everything that had went before. thanks to harry and nick for inviting me on this fabulous trip.

couldnt get pictures on the other day, got them on now

Blimey!! Thats just a bit better than the places I've been recently....

Amazing stuff, and wonderful Pics too.

Vertigo! Must have been a relief to get the summit to yourselves for a wee while.

Great pics and trip. My Matterhorn pic is framed on the wall above my P.C. Mind you I was happy enough just looking at from the top of the Gronergrat railway.

Wonderful stuff , what a trip , great photos of a stunning mountain

Fantastic stuff!
The Matterhorn has got to be one of the most beautiful, iconic mountains in the world.

I've had the pleasure of looking across to the Matterhorn from various parts of the Monte Rosa and mountains around Zermatt and have previously walked from Zermatt up to the Hornli Hut. I have always fancied ascending the Matterhorn but what puts me off is coming back down (and the number of others on the mountain).

A big well done. Thanks for sharing.

yes thin , but what a summit. ive listed below a rough guide to costs excluding food. we didnt have a guide, im of the opinion if you need a guide you shouldnt be on the mountain. the cost of a guide was 1400 swiss francs.

that would be to go climb the matterhorn. we spent 3 days aclimatizing at the valle d ayas hut which included dinner and breakfast, and camped in zermatt in between going up to the mountains.

so all in all aprox £507 for our 8 days excluding food and drinks. hope this helps

yes thin , but what a summit. ive listed below a rough guide to costs excluding food. we didnt have a guide, im of the opinion if you need a guide you shouldnt be on the mountain. the cost of a guide was 1400 swiss francs.

that would be to go climb the matterhorn. we spent 3 days aclimatizing at the valle d ayas hut which included dinner and breakfast, and camped in zermatt in between going up to the mountains.

so all in all aprox £507 for our 8 days excluding food and drinks. hope this helps

Thanks for the info seams like a great trip without busting the bank.

Oh wow you managed to climb it! Congratulations

That sounded like an amazing day...can't believe they have not thought about a better way to get people down. The pictures are fab

Great Report with some great pictures.
Thanks for sharing your adventure.
MG