after a really long and tiring walk in from Trockner Steg cable car station the previous day, nick was feeling the worst for wear. so it was just e and harry who that set out to climb pollux as part of our acclimatization training for an attempt on the Matterhorn. we had stayed overnight in the Valle d,Ayas hut, we were awoken around 5am with various teams getting ready and setting out from our dorm. we were last up at 6am went down and had the usual breakfast of bread and jam with a cup of coffee.as we drank our coffee the last of the teams set of up the glaciar roped up and headtorches on. we waited till first light before roping up and starting the long slog uphill on the Grande Verra Glacier. we arrived at the coll between castor and pollux, there were a few teams on our original route of pollux so we instead opted for the west flank of castor. Castor from the coll

its a long zig zagging path, pretty tiring in the altitude. youve got to try and do things slower, at a pace you can keep going without being too breathless that you need to stop/ start. the final turn takes you up towards a bergscrund just below the summit arete. we had been using walking poles till now but had to take out the ice axe to get over the little akward move.
after we crossed over the step there is a 10 metre rise which takes you on to a beautiful narrow and exposed ridge which rises for 50 metres to the summit. arete to the summit we slowly crossed the ridge and stood at the summit. this was my first 4000 metre peak and the views all round were stunning. we didnt stay long as another party had come from the east and we didnt fancy any delay at the exposed ridge. so we set of back down the ridge. 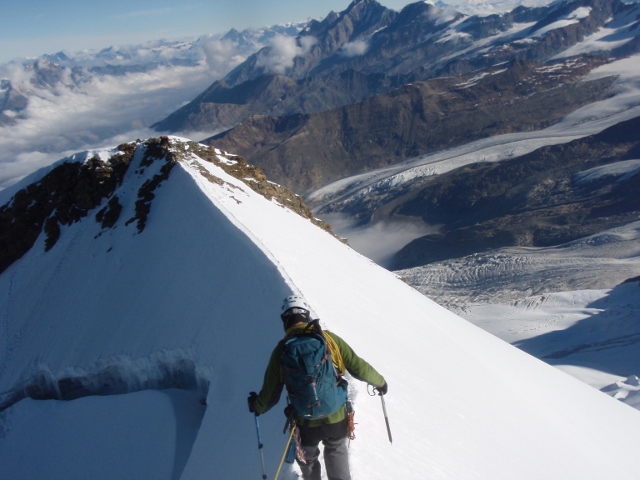 we made our way back to the coll, it was only about 10 30am, we were too early to return. so we decided to go do our original route the south west ridge of pollux. its a short rock scramble with a 50m step of steep rock with fixed ropes and chains, with an easy snow arete to the summit. this would be good practise for the matterhorn. we walked over to the base of the ridge and had a food break, then set about scrambling up the ridge. we soon came to the crux of the route and the fixed ropes. this was my first time encountering fixed ropes and found it a bit unusual, i thought it was more strenuous hauling yourself up rather than climbing with hands and feet. harry on the fixed ropes

at the top of the scramble you reach the snow and a statue of the Madonna with Child. harry at statue, path up castor in background we than walked up the ridge towards the summit. me on the snow slope 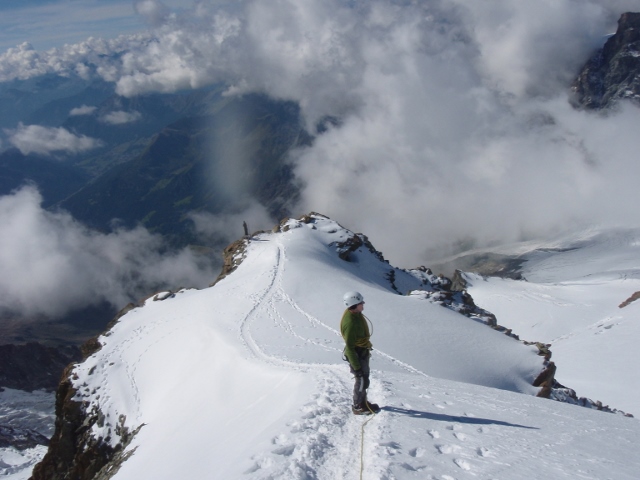 again the views were stunning, Monte Rosa, Liskamm, Breithorn all within touching distance. we took some snaps and headed back down the way we came. 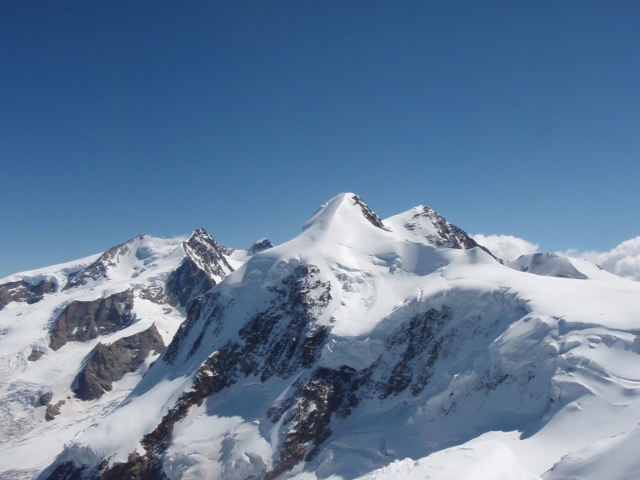 we down climbed the fixed ropes which again i felt akward and scramble to the base of the ridge.as we descended the glacier towards the hut the sun had softened the snow a little, a time you dont want to be on a glacier, but we got to the hut at 2pm were we had some snacks and a well deserved coffee. was my first experience of walking/climbing in the alps, found it ok, cant do anything too fast as you tire quickly, lots of cravasses, seracs and untold dangers on the glaciers. but allround an enjoyable day in some fabulous scenery, and a good days acclimatising for the matterhorn.

Fantastic! Love the picture of the bergschrund and the arete...now thats what I call a arete!!
Know what you mean with taking everything slow...the higher you get the slower you become. Thank you for posting!!!

Great seeing your photos of Castor and Pollux. I did Pollux in 2003 and Castor last year. Seeing the narrowness of the ridge on Castor reminds me why I wasn't too happy in the wind up there. Cheers.

foggieclimber wrote:Great seeing your photos of Castor and Pollux. I did Pollux in 2003 and Castor last year. Seeing the narrowness of the ridge on Castor reminds me why I wasn't too happy in the wind up there. Cheers.

heh foggie, thanks for replying, it sure is a narrow arete, heard there was a guide and some clients killed when they were blown of the arete a few years ago so weel done for doing this in windy weather,