This board helps you to share your walking route experiences in England and Wales... or overseas.
Warning Please note that hillwalking when there is snow lying requires an ice-axe, crampons and the knowledge, experience and skill to use them correctly. Summer routes may not be viable or appropriate in winter. See winter information on our skills and safety pages for more information.
Post a reply
16 posts • Page 1 of 2 • 1, 2

After returning from the UK a week before, it was no surprise to find I had a virus, one of us always get one when we go home which I suspect is something to do with a much lower exposure here than over there. Anyway, a week of sniffling went by before I decided to head out to the mountains.

I was surprised to find Highwood Pass (or at least a short section of Highwood Pass) had been reopened. Normally Highwood Pass is closed throughout winter but this year it was closed throughout summer too due to severe damage from the June floods which washed away the road and bridges. The reopened section does provide access to some beautiful areas so I selected an easy hike for the day and took a leisurely ride down highway 40.


I was not surprised to find I was alone in the large car park (signed Ptarmigan Cirque) just 18km from the open winter gate on highway 40. The last of autumn was still just visible in the trees as the sun shone down melting the frozen snow. To the south I could hear trucks and diggers working on road repairs and wondered how much longer they would be able to work with the regular winter road closure fast approaching.

I set out to the north on a well trodden trail with frozen compacted snow covering its surface, the trail begins by heading north on the west side of the road for a few hundred metres before crossing to the east side and into the forest. Ptarmigan Cirque sits at the base of the mountains visible here on the right.

before entering the forest I grabbed this shot of Pocaterra Cirque back on the west side of the road the moon just visible along the ridge top above little highwood pass. 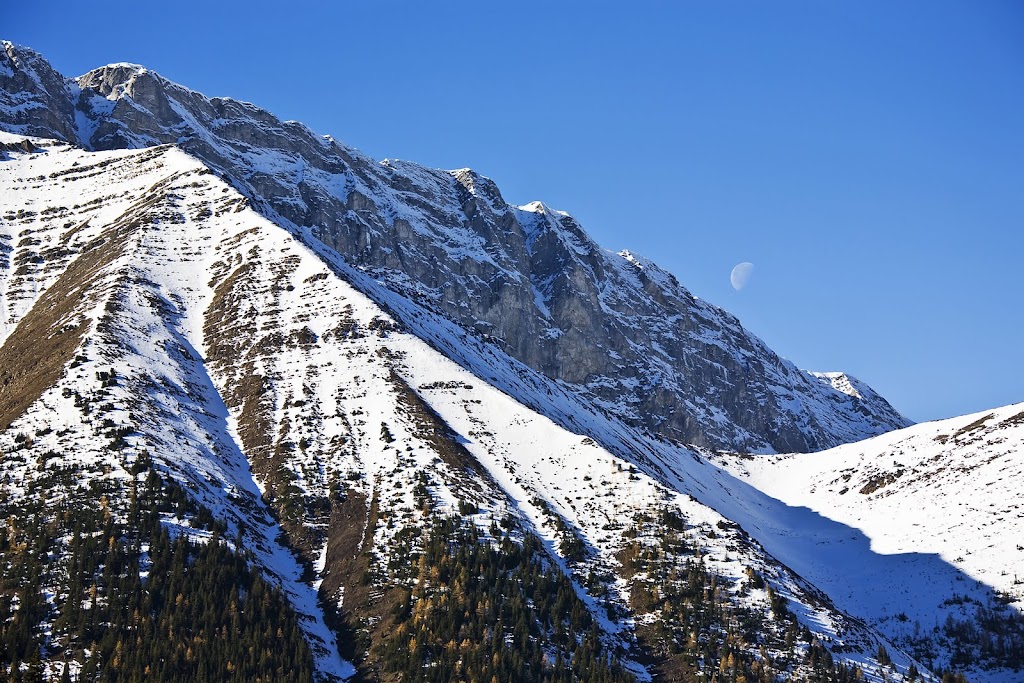 As is almost always the case in Kananaskis the ascent is steep and brutal straight out of the car and stopping for a few 'photo breaks' is the order of the day as I get my first look back toward highwood ridge.

The forest section is where the most aggressive ascent is and as I emerge above the tree line it eases considerably, the car park is just visible at the base of highwood ridge as is a tricky looking traverse to Grizzly Peak. It would be nice to make a one way hike along the ridge, maybe by leaving my bike at one end and driving back to the other, something to consider for next spring/summer 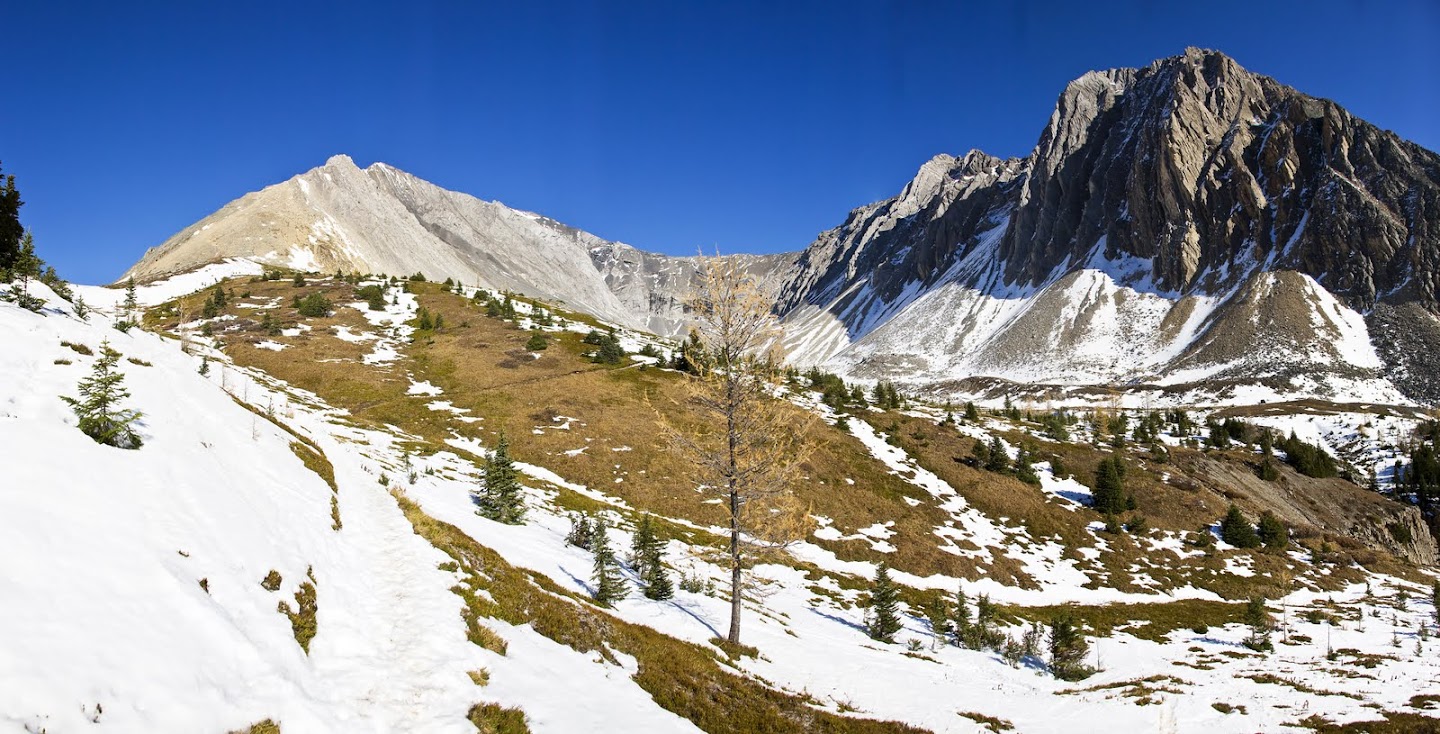 its such a shame that the wonderful autumn colour doesn't stay around longer as this would have been a perfect shot against the blue sky today. Autumn here really does only last about 3 weeks. 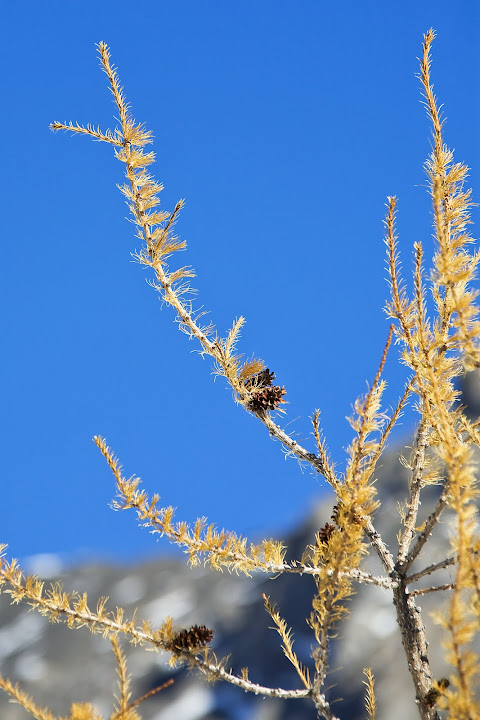 As I was almost at the end of my hike with the trail circling around in the bowl beneath Mt Arethusa and heading back down toward the forest I decided to take a scramble up the scree covered slopes of Mt Rea, though there is no ascent to the summit possible from here I thought it would make a nice addition to the day and get me a little higher.

Initially the ascent is easy along grassy mounds raising me to a good vantage point looking down on the cirque below but the scree slope that is yet to come looks like hard work.....to say the least.

Rising up the initial stage of the scree brings spectacular views back over highway 40 to Grizzly Peak and beyond and also now to Pocaterra Ridge which is a great hike on the west side of the highway. 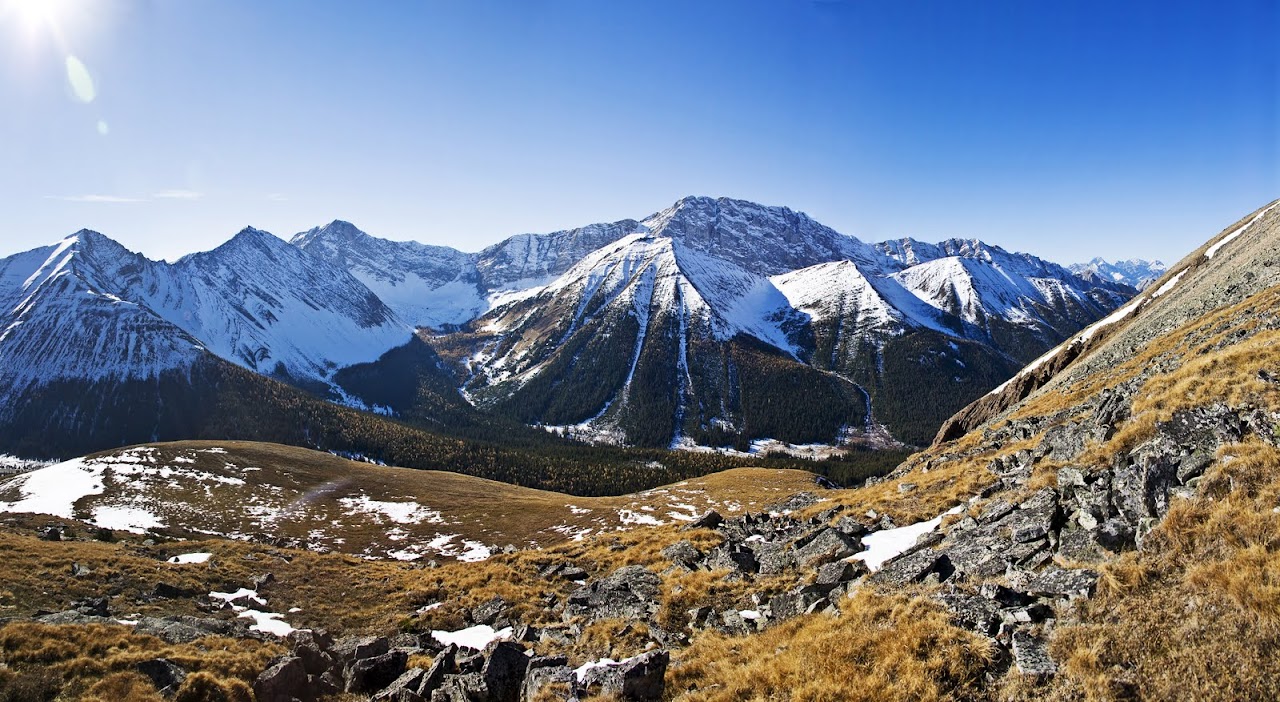 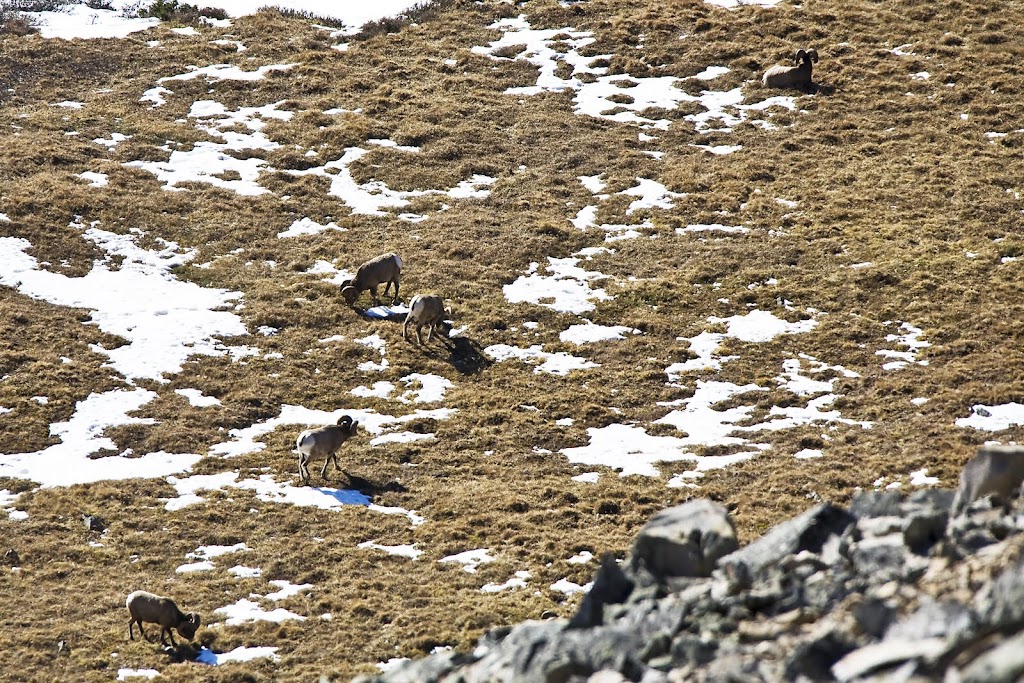 the scree ascent is (as always with scree ascents) a hideous ordeal, but the views keep on opening up further and though I'm feeling drained I continue my steady plod up the unforgiving scree 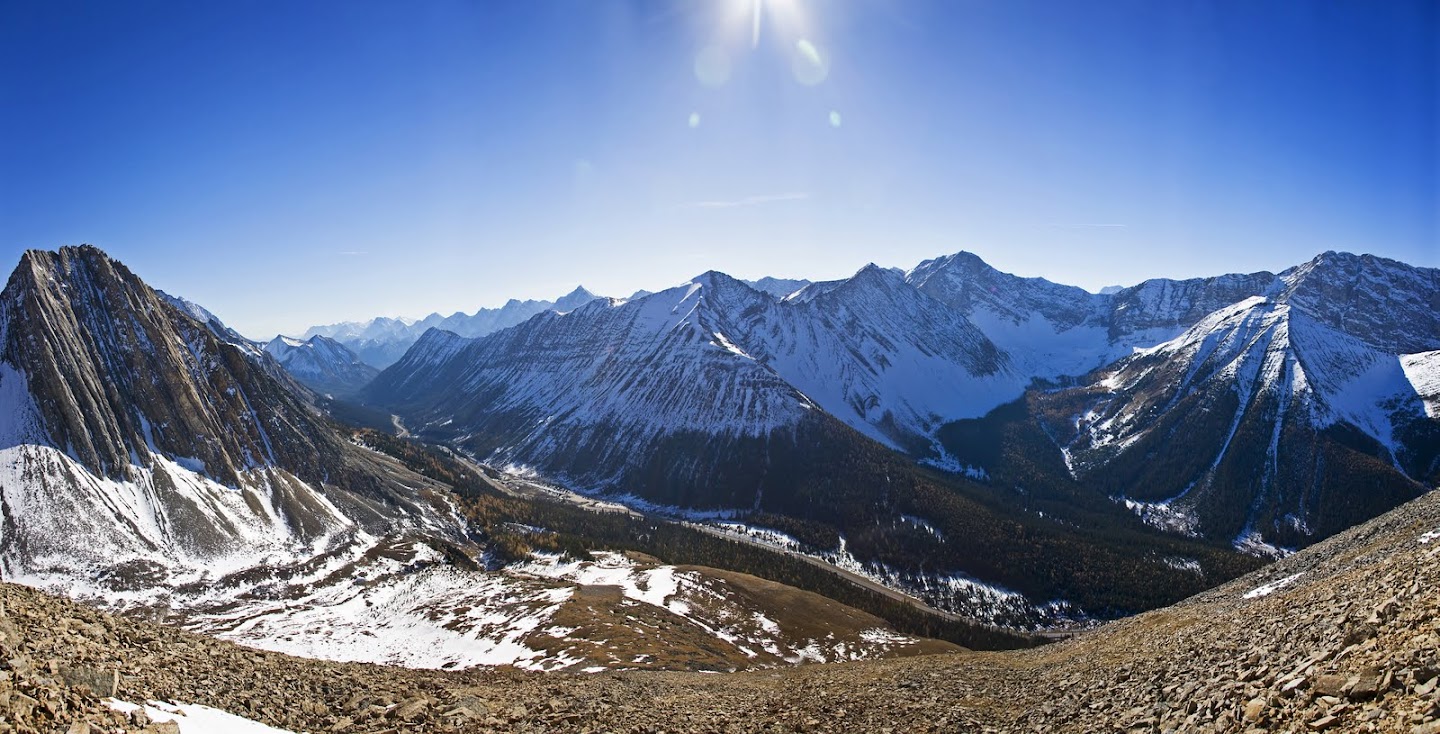 as I begin to run out of places to go, well to go safely anyway, I slow down and for the first time notice the biting cold up here. I hadn't considered that a 517 m ascent (1696 feet) would get me to 2707 m (8881 feet) today, I donned my hat, coat and gloves and pressed just a little further. 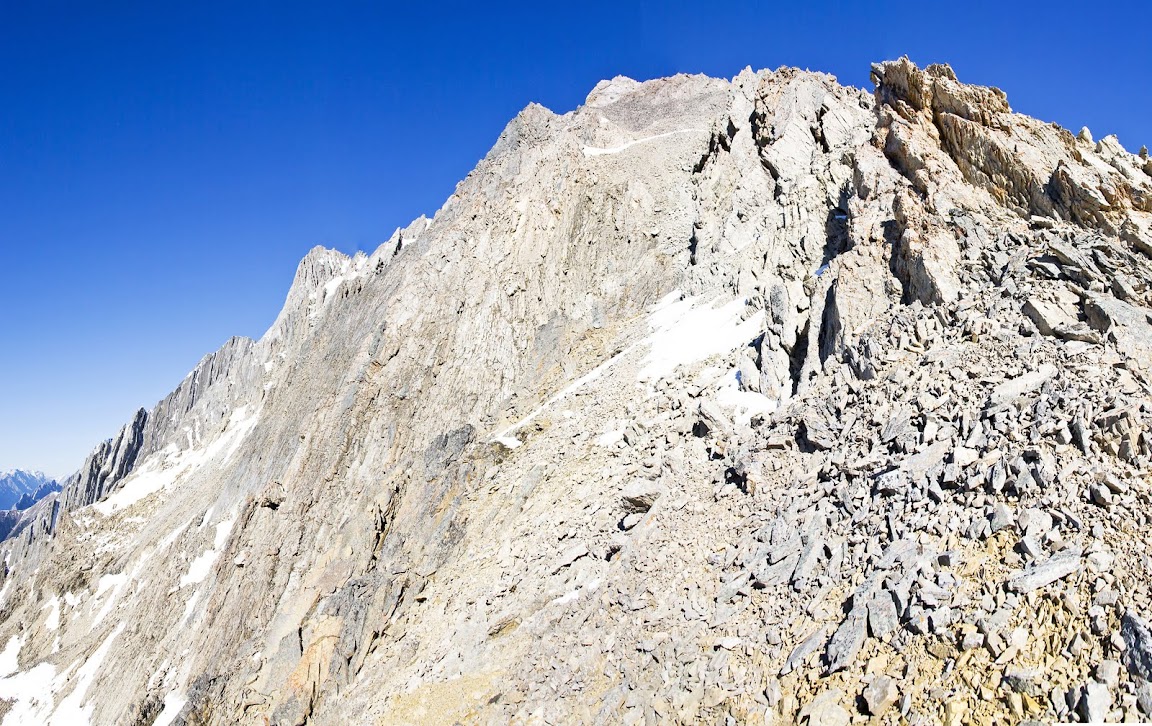 Just a little higher and the full length of Pocaterra Ridge comes into view, this is what first made me notice the altitude here as I found myself looking down on a ridge that I knew was well over 2500 m 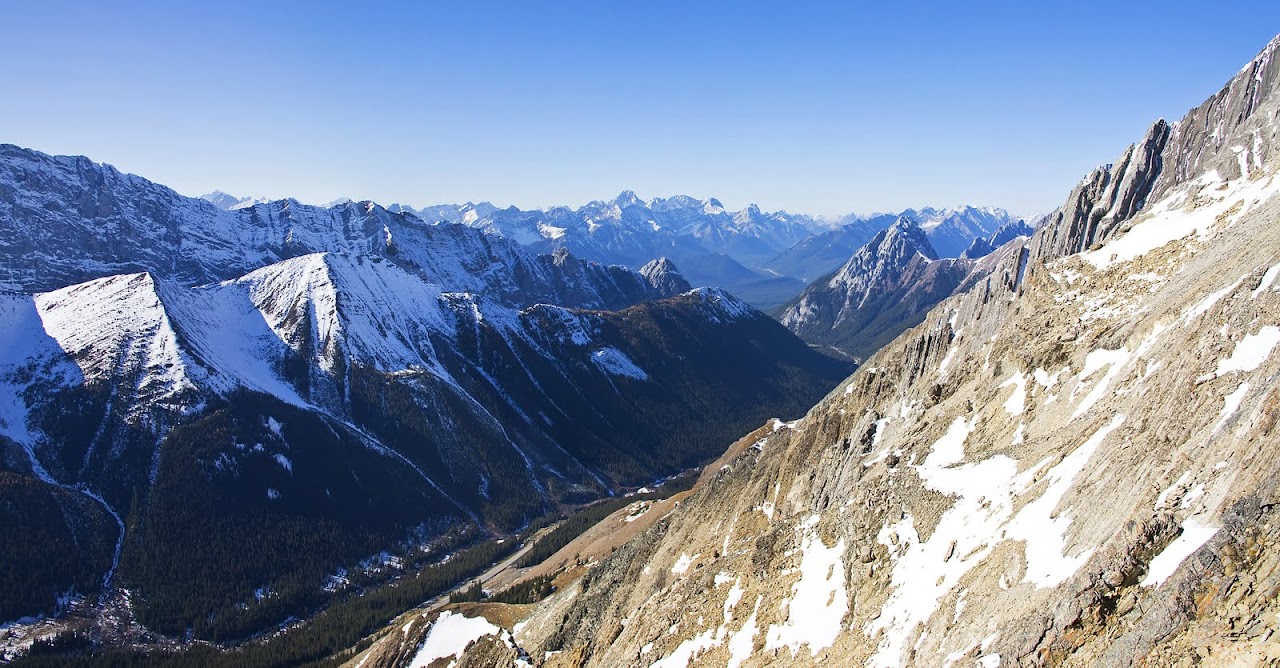 As I finally come to a point where I've had enough, I can sit back and look over a spectacular sight, well beyond Highwood Ridge and Paradise Pass into layer upon layer of mountain peaks

After a short break up top I decide to start down again with one more glance over Pocaterra Ridge and the Elk range and back toward Kananaskis Lakes, the steepness of the mountain can be seen here with the highway in the valley below. 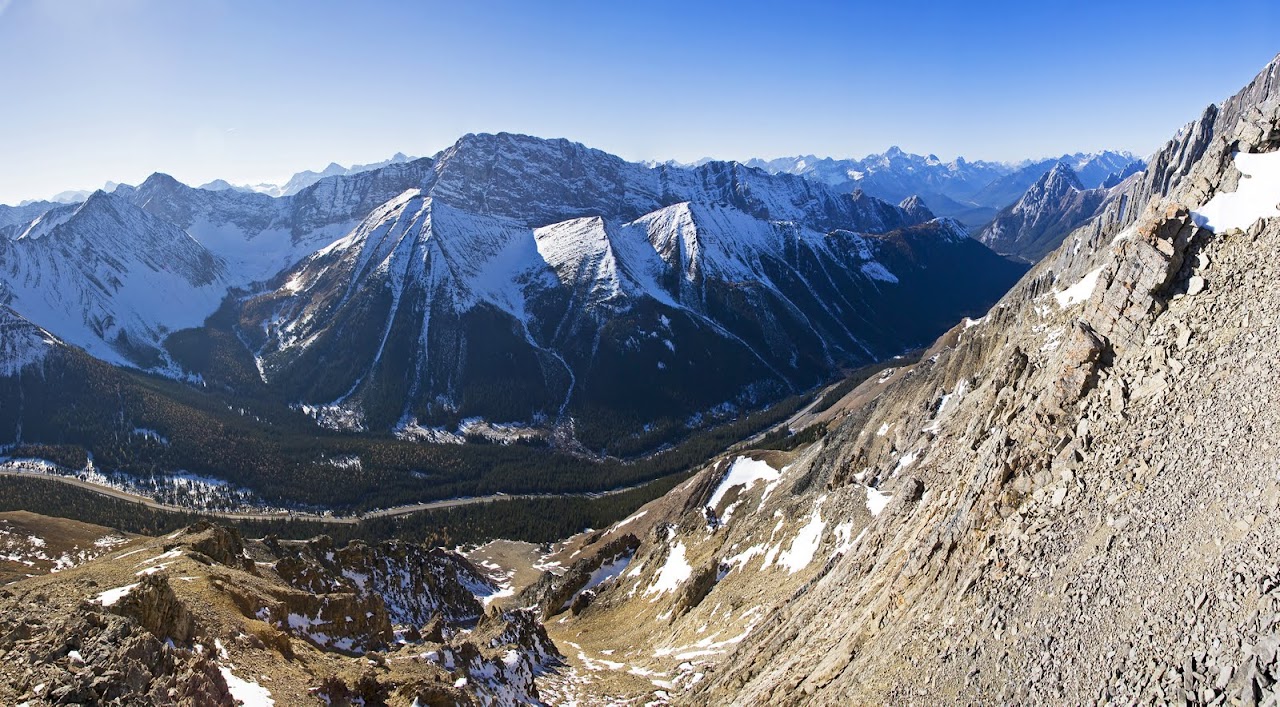 I took a slightly different angle on the descent to rejoin the trail and make the short circular route into Ptarmigan Cirque and out again before rejoining the ascent trail to descend to the car park.

This was a very much shorter (but no less strenuous) hike than usual (perhaps due to the effects of that virus) but it really helped me identify a few more hikes in this fantastic area that remains locked away for 6 months of the year, I hope to be back here again before the December gate closure seals away these wonders for another winter. 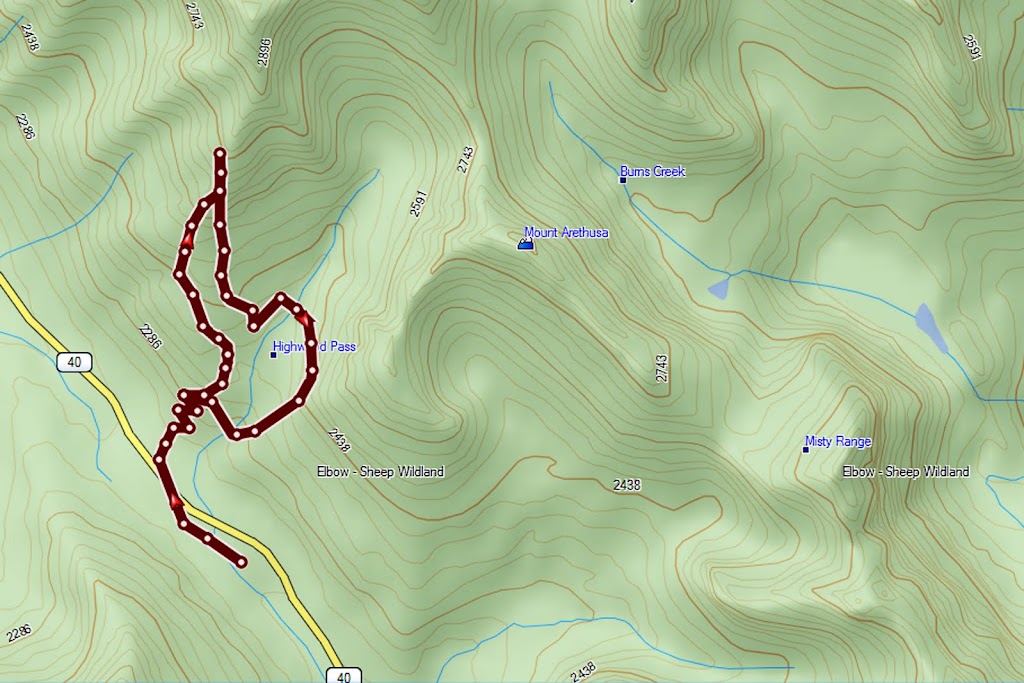 As it transpires, I didn't make it back to the area before the winter gate closure, but it gives me something to look forward to in the springtime

much much better than those swampy North York Moors on my doorstep.

Awww the countryside is stunning...can we please immigrate some Rocky Mountain Sheep to Scotland?

Oooh you're spoiling us now! As I was saying, the Walk Highlands Canada meet is essential!

Saved the best till last

L-Hiking wrote:Great stuff again Chris. Those mountains look so tempting
much much better than those swampy North York Moors on my doorstep.

Thanks LH, I keep telling everyone I meet how wonderful the North Yorks Moors are, don't be letting on.....si thee

Mountainlove wrote:Awww the countryside is stunning...can we please immigrate some Rocky Mountain Sheep to Scotland?

I agree ML, they are fantastic creatures and bloody enormous too, when they get into the 'Glasgow Kiss' competition that they seem to enjoy in the springtime the noise is incredible

HighlandSC wrote:Oooh you're spoiling us now! As I was saying, the Walk Highlands Canada meet is essential!

It's a must, I'm heading down to North Carolina in April and aiming to meet Stretch in Greensboro....are you going to join us mate and enlarge the group for the first official North America meet up

Thanks JK, I love this area, it is maybe more special with it being closed 6 months of the year, but there are some beautiful hikes along this stretch of highway.

Wow! Superb photos of those amazing views that go on and on and on

Looking forward to the new season's walks and photos, Chris

SusieThePensioner wrote:Wow! Superb photos of those amazing views that go on and on and on

Looking forward to the new season's walks and photos, Chris

Thanks Susie, hope to get a few more in this year

Just some stunning photos there Chris

Not much more I can say really

thought I'd have a look in the dark side

and see what you'd been up to, Chris - I see you've not lost your knack, cracking photos as ever ! - cheers

Not much more I can say really

Cheers Pete, some great views for such a wee hike

rockhopper wrote:thought I'd have a look in the dark side

and see what you'd been up to, Chris - I see you've not lost your knack, cracking photos as ever ! - cheers

Thanks Rockhopper, your timing is perfect, I've only recently posted these

Fantastic stuff Chris - what an amazing place. The pictures are sensational as ever.

...I'm having second thoughts about posting anything on my bimble on the Malvern Hills last weekend!

clivegrif wrote:Fantastic stuff Chris - what an amazing place. The pictures are sensational as ever
...I'm having second thoughts about posting anything on my bimble on the Malvern Hills last weekend!

Get it posted Clive, the Malvern Hills are beautiful

Totally stunning photos there Chris . Could look at your reports all day