After more than a week of warm Chinook winds I decided to take a ride to Upper Kananaskis lake as we hadn't been there since August. As I've said many times, this really is a favourite place for Sarah and I and though it's 1.5 hours from home the journey is beautifully scenic and time slips by as you drift through the mountains on empty roads.


I parked at the isthmus between the upper and lower lakes aiming for a section of trail I'd not yet explored. After getting the boots on and additional supplies I headed off toward Mt Indefatigable riding high across the drifts on my snowshoes. The lake ice looked wonderfully blue and had I not been in those snow shoes I would have been down there with the camera, but snowshoes are not made for crossing boulders so I decided to leave it until later.

across the lake snow clouds formed and blocked out the sun, coming and going in a pattern that repeated throughout the day.

The trail I was exploring today rises up from the isthmus into the forest and is initially well trodden and compact, down on the lake I see a trio of people snowshoeing and beyond them a pair ice fishing out on the lake. The trio are examining a wonderful large slab of blue ice that is folded across the shoreline, I make a note to drop down there on the way out. 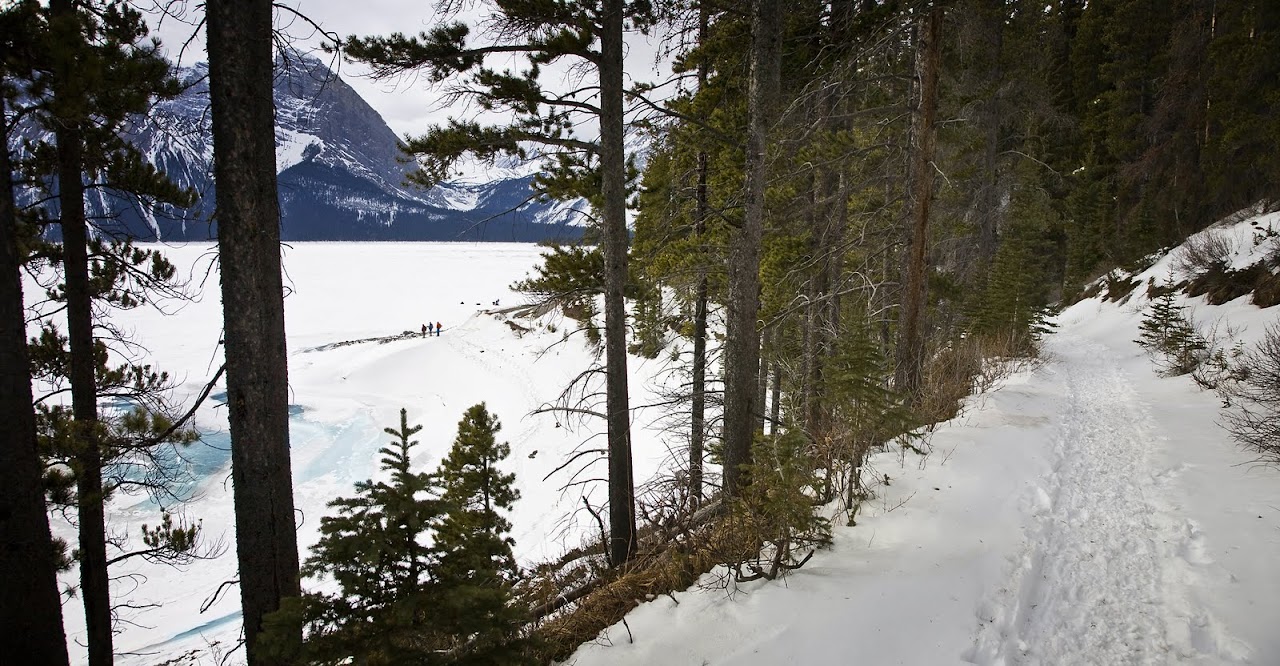 After an uneventful plod through the forest I am soon beyond the end of the lake, I have had fun crossing the deep snow of the avalanche slopes in a fairly easy journey on an undulating path. Across the lake the familiar face of Mt Sarrail with it's sheer walls hiding Rawson Lake in a tight cirque higher up the eastern flanks . Through the gap is the 'hidden valley' which leads to the glacier field that feeds Upper Kananaskis lake. 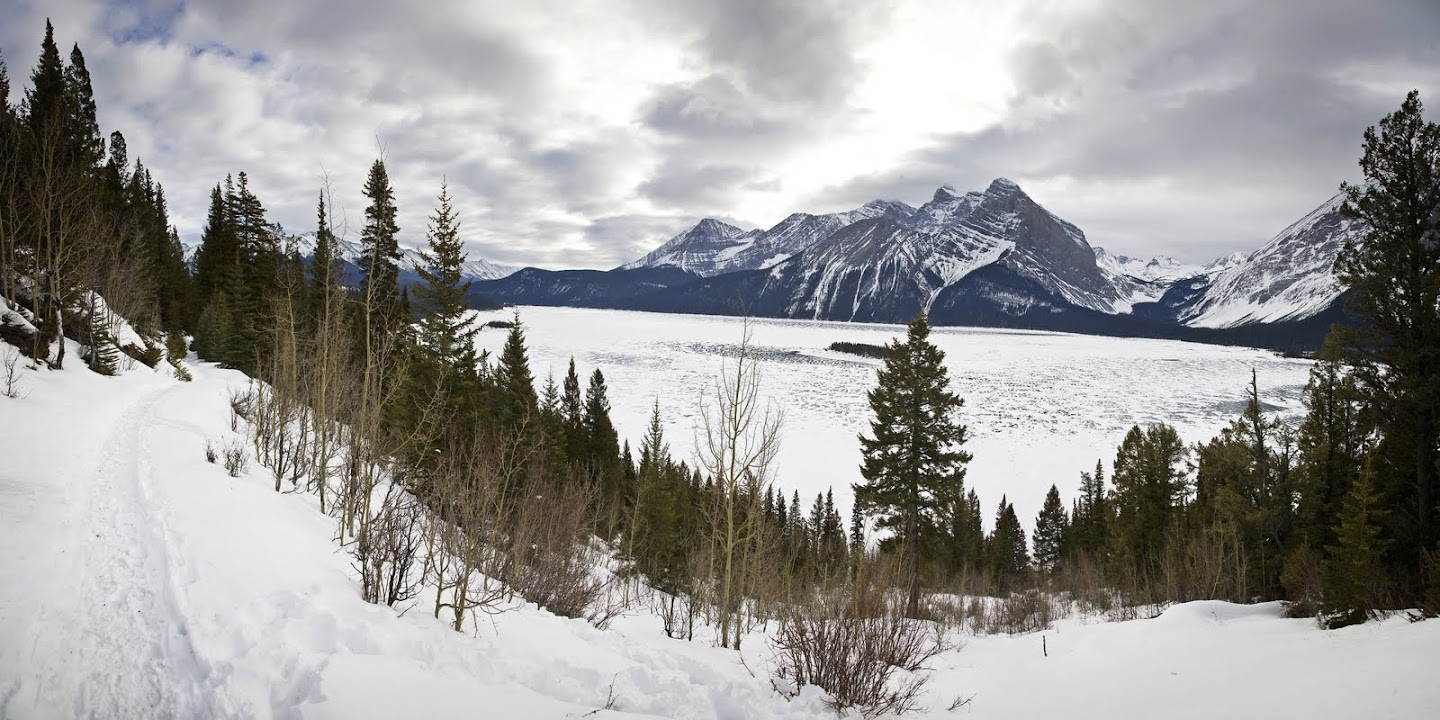 Ahead, across yet another avalanche slope, Mt Lyautey rises high above the adjacent Mt Putnik which serves to form a valley where Three Isle Lake hides from view, beyond that is the provincial border where Alberta meets British Columbia. 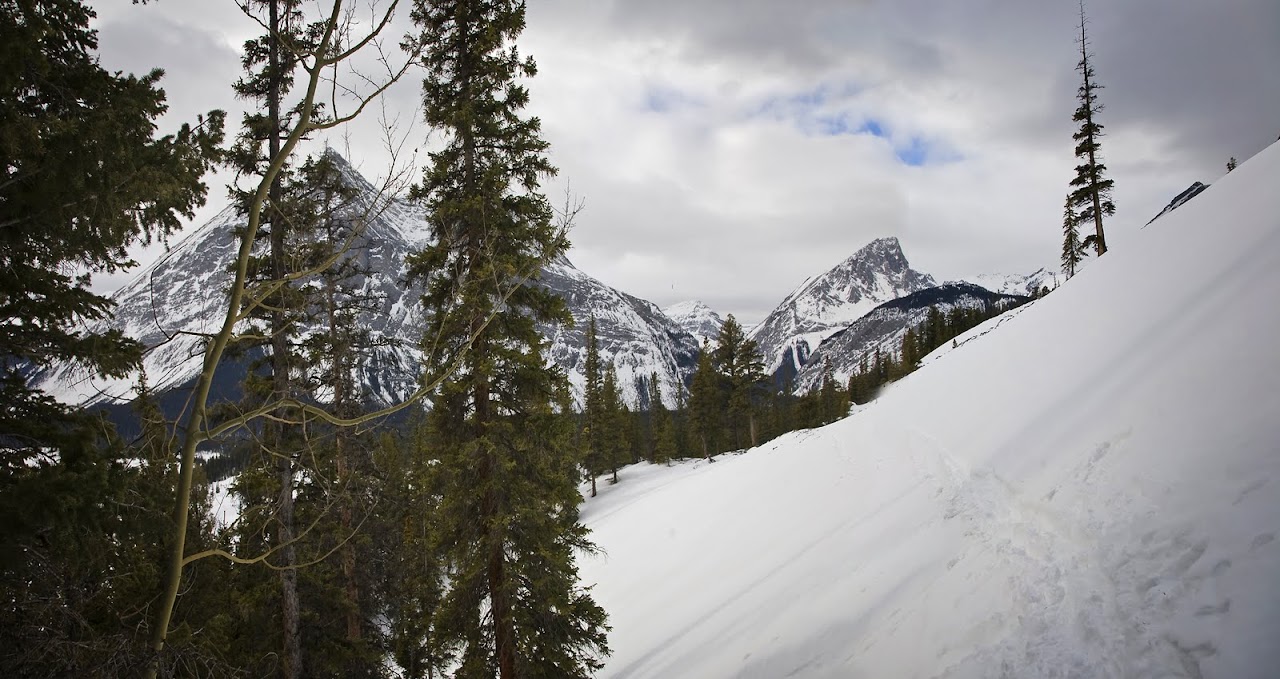 When I reach a huge open area caused by an equally huge historic rockfall, I decide to stop for lunch and take in the views across the lake while I enjoy some Heinz Tomato Soup and a few cups of tea to be going on with. 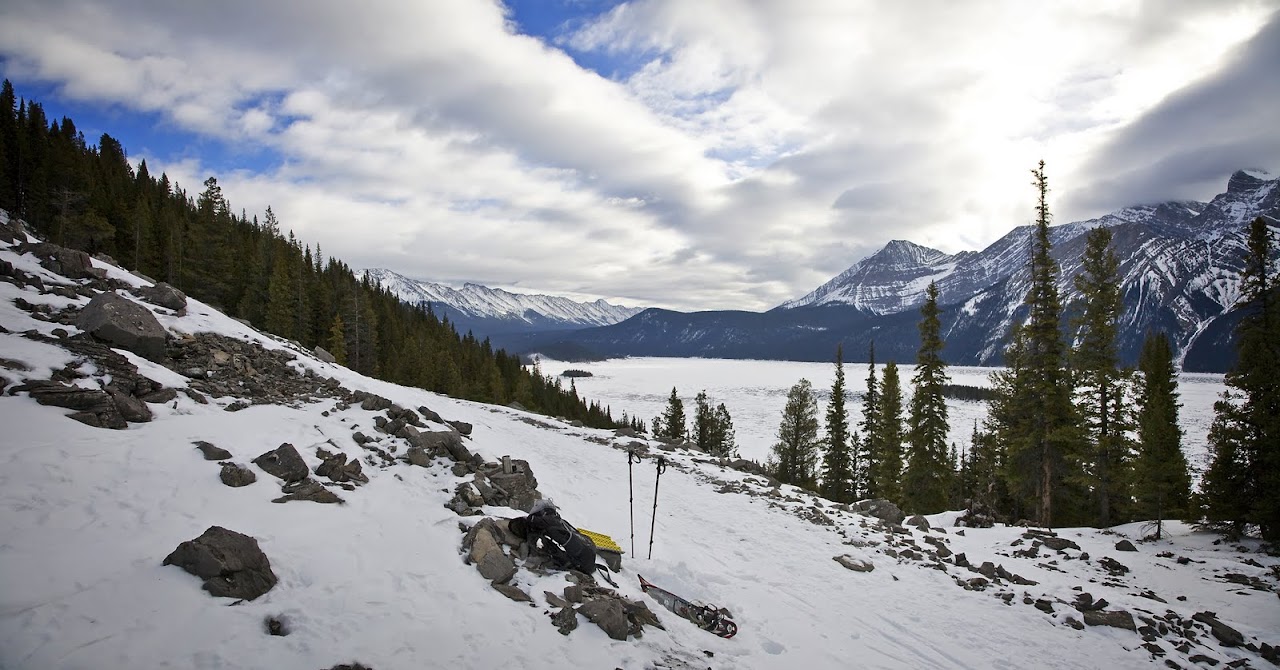 Behind my lunch spot is the sheer face that was a result of that historic rockfall, there is a nice triple ice fall tucked into the wall at the lower mid section but too far away to grab a decent shot with a 105mm lens.

The non zoomed version of the shot shows the scale of that rockfall which now makes a massive boulder field, the mountains in the distance on the right of shot are a marker for the start of the hike today. 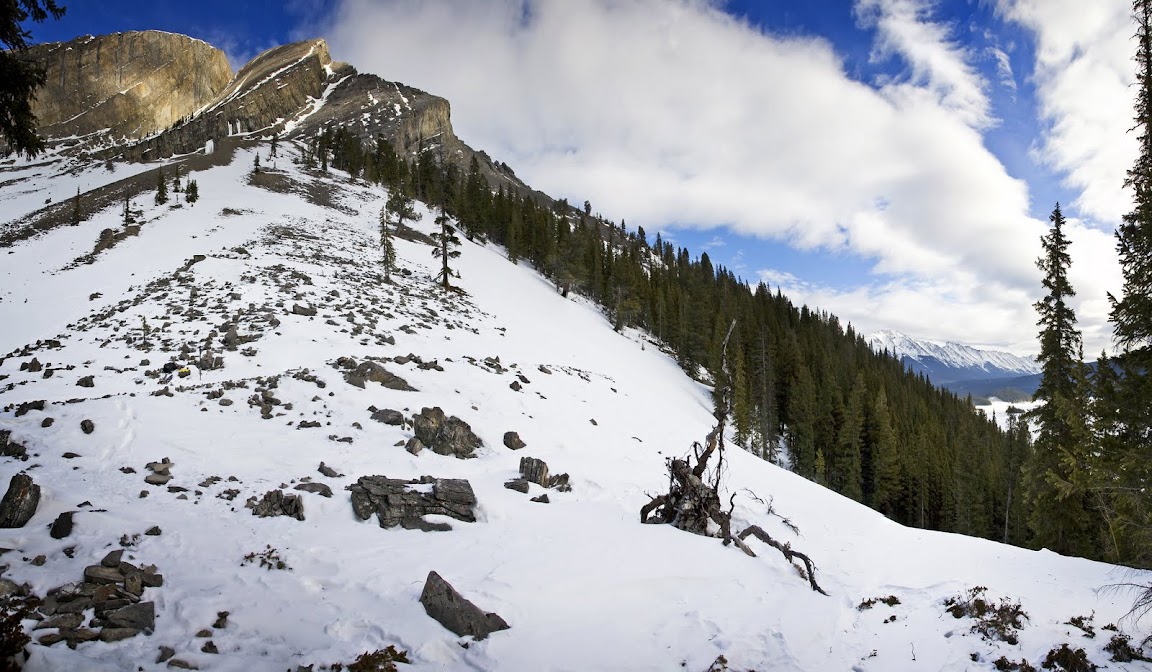 After lunch and a general lounge around I carry on toward the Alberta/BC border, never intending to make it today, just exploring the trail and it's contours for a summer hike to Three Isle Lake. 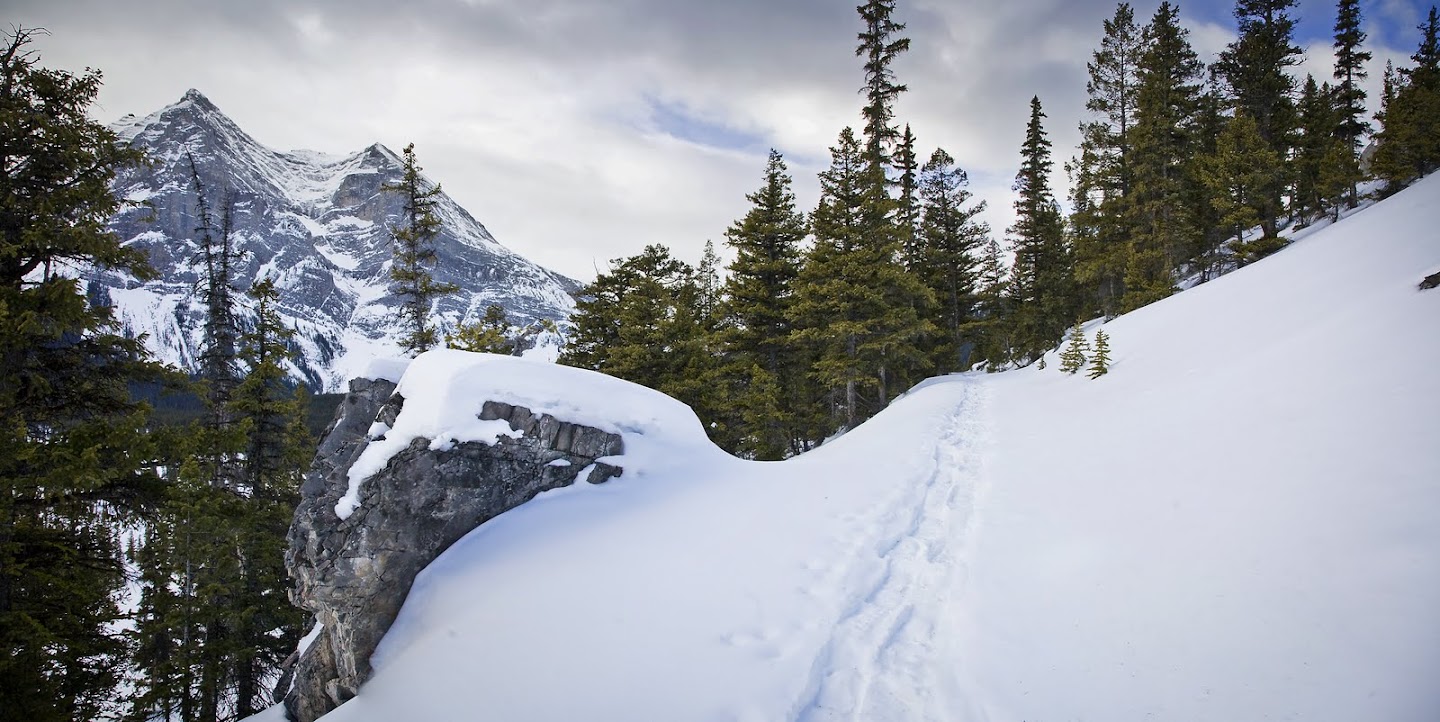 After a short time the trail drops back into the forest, I can see ahead that it is pretty much trees all the way from here and decide to turn around and go explore the ice along the lakeshore 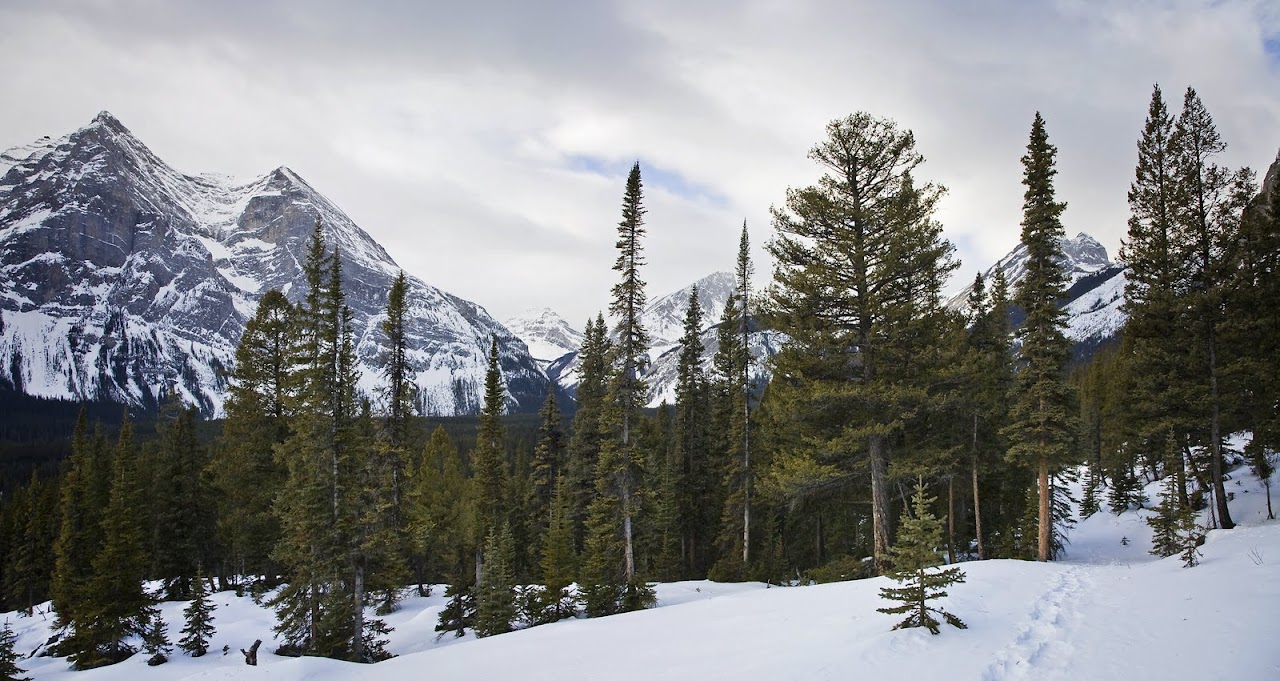 As I head back toward the lake and those wonderful panoramas it strikes me that it would be a great idea to bound across the untrodden snow on the boulder field playing russian roulette with the holes beneath. 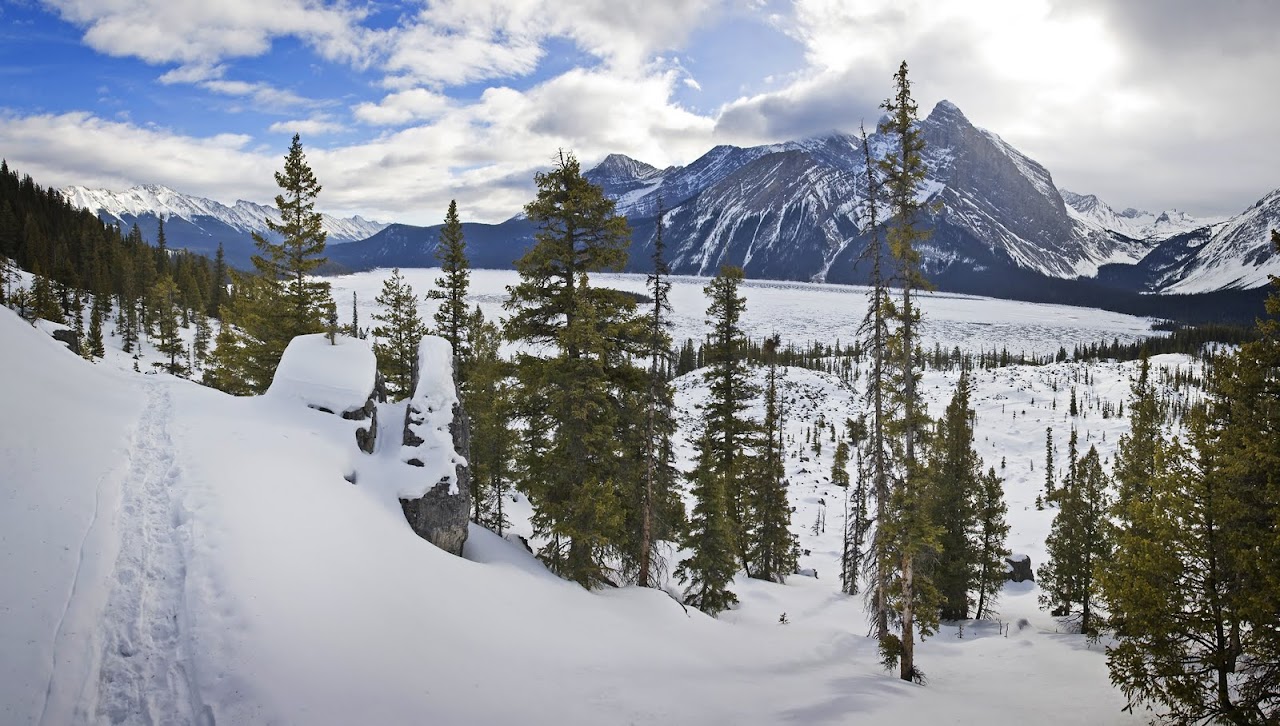 The 'bounding' is indeed great fun even if it is both treacherous and hilarious in equal measure, as I stop for a breather I'm reminded of just how much I love the Canadian winter.

The last few 'bounds' in untrodden snow through the forest to the waters edge are fantastic, incredibly deep snow cushions every step and then flicks up off the back of the snowshoe and over my head creating my own personal snowstorm as I go. 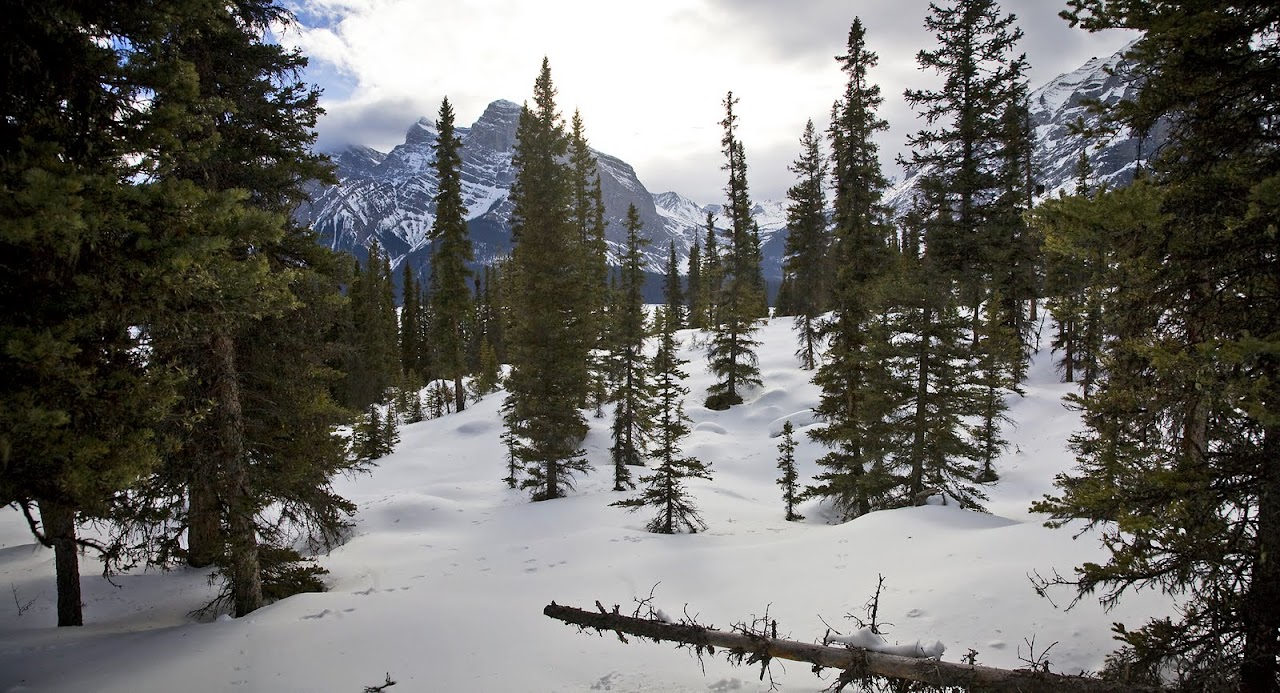 Down at the lakeshore its time to knock off all the snow and sit down for a cuppa beside the beautiful collapsed ice, the sun makes a breakthrough right onto my location and the world is a perfect place for one short moment.

On a deep section of lake I see (for the first time in my life) air bubbles trapped perfectly in the ice, stacked in layers as the ice froze deeper and deeper, it's incredible but I'm reluctant to go too far onto the ice for better shots of it, the clarity of the ice makes it seem fragile (though in fairness it really isn't) maybe if I wasn't alone I would have gone further, I needn't have worried, as it turns out....there's more along the way. 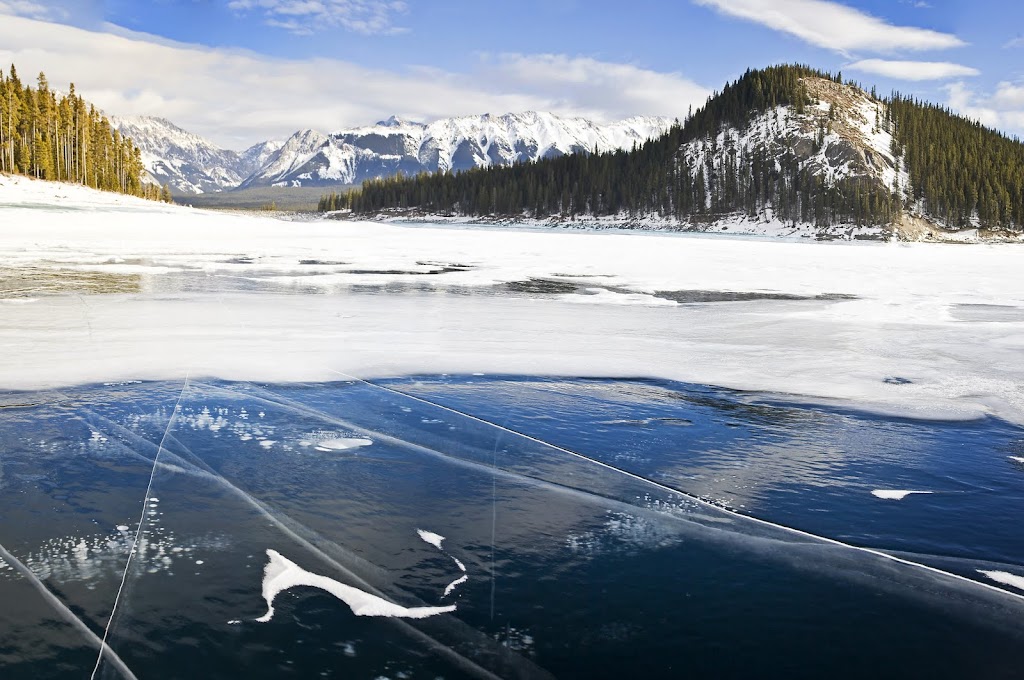 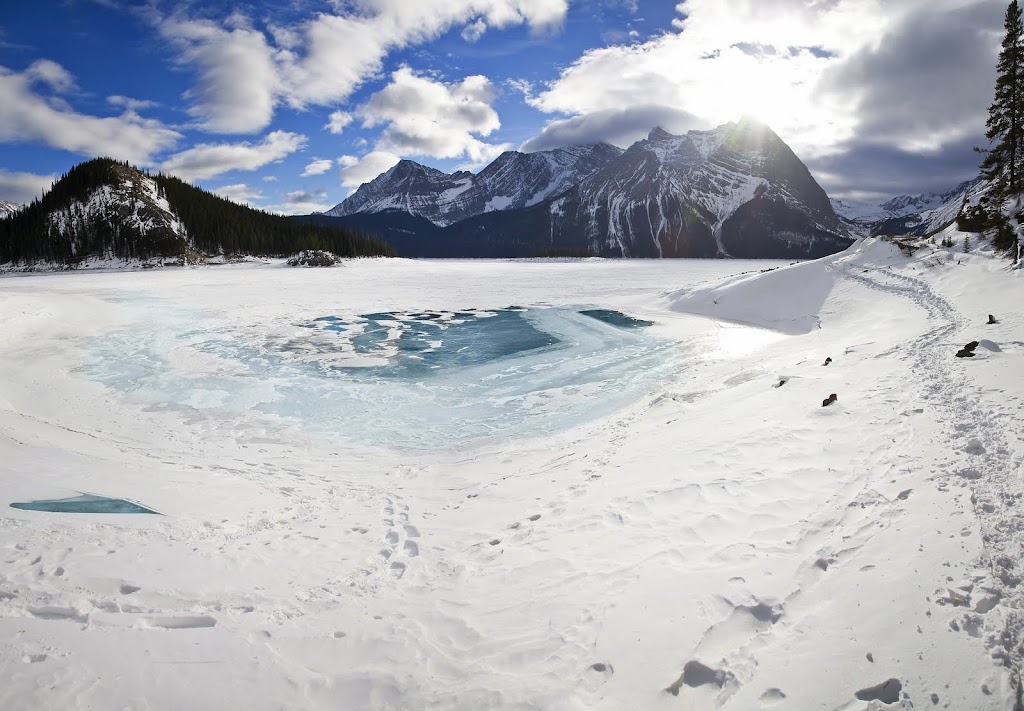 A little further along I find a great patch of frozen air bubbles closer to the edge on absolutely solid ice, they are one of the strangest things I've ever seen. Not exactly mysterious but strangely compelling, fascinating or perhaps intriguing would be a better description. 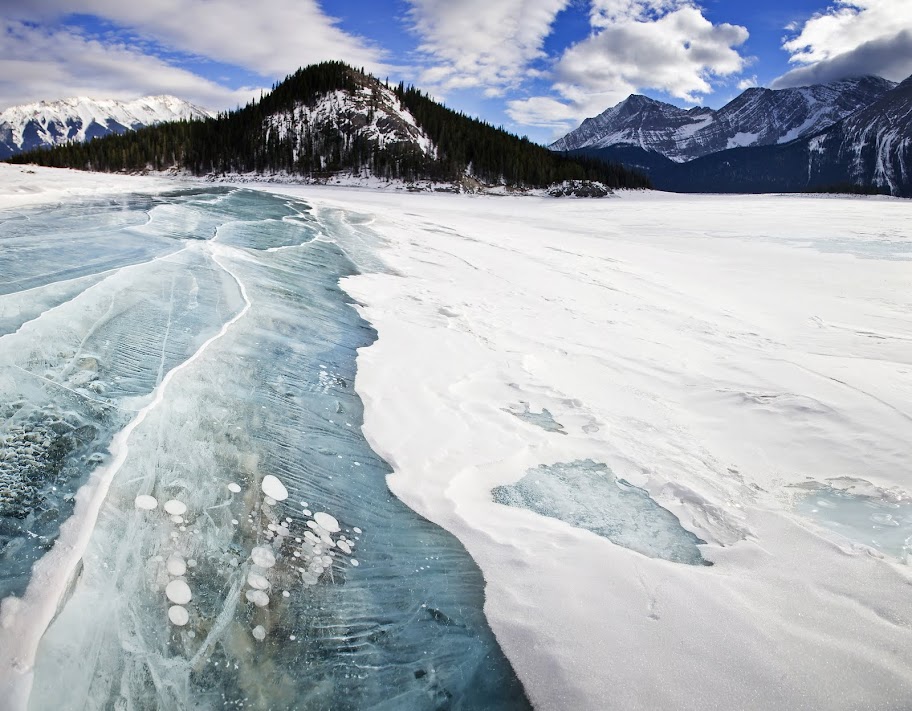 In close up they are equally compelling, stacked in varying sizes like coins of differing denominations floating above each other 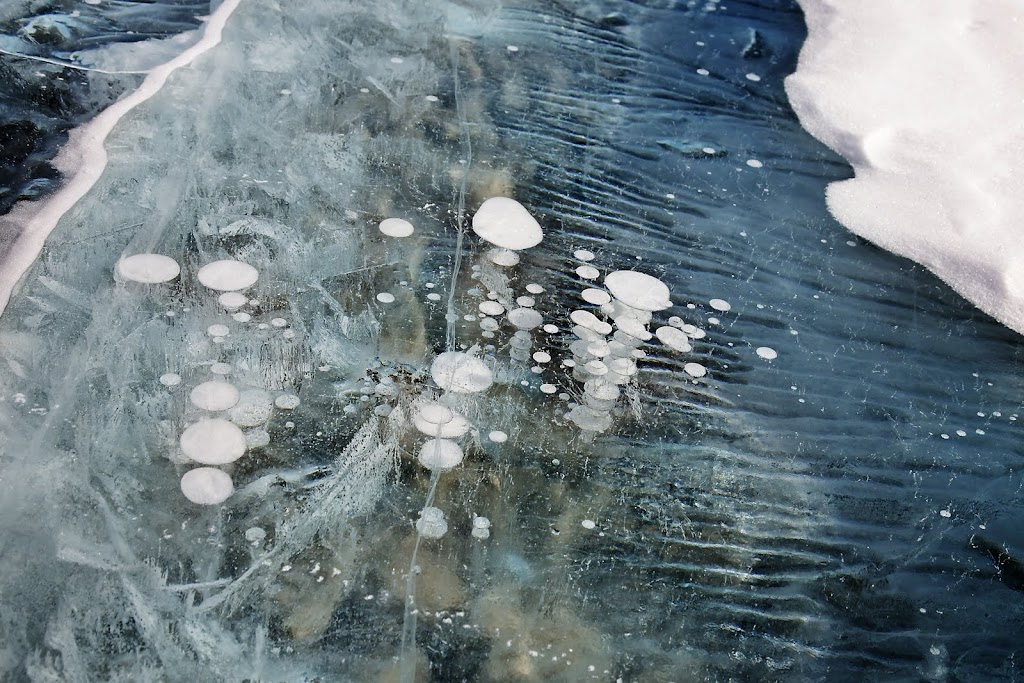 It's easy enough to see how they are formed but that isn't what makes them so interesting, it's more about the timing, about how the ice forms in layers under which another air bubble freezes, then another layer of ice and another bubble over and over to form these wonderful stacks. 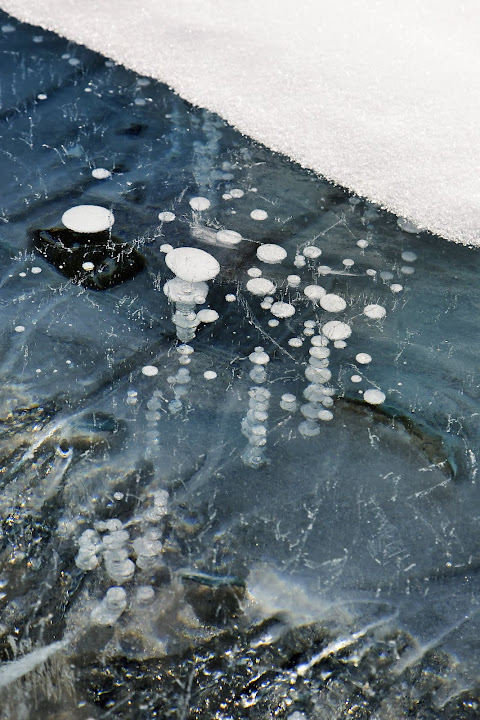 soon I'm finding them all along the shoreline in perfect patterns and find myself on my knees trying to get a shot under the ice, I begin to wonder if I'm a little strange being so intrigued by such a simple thing. Perhaps it's because it's the first time I've ever seen such a thing....which doesn't happen often to a much travelled old geezer. 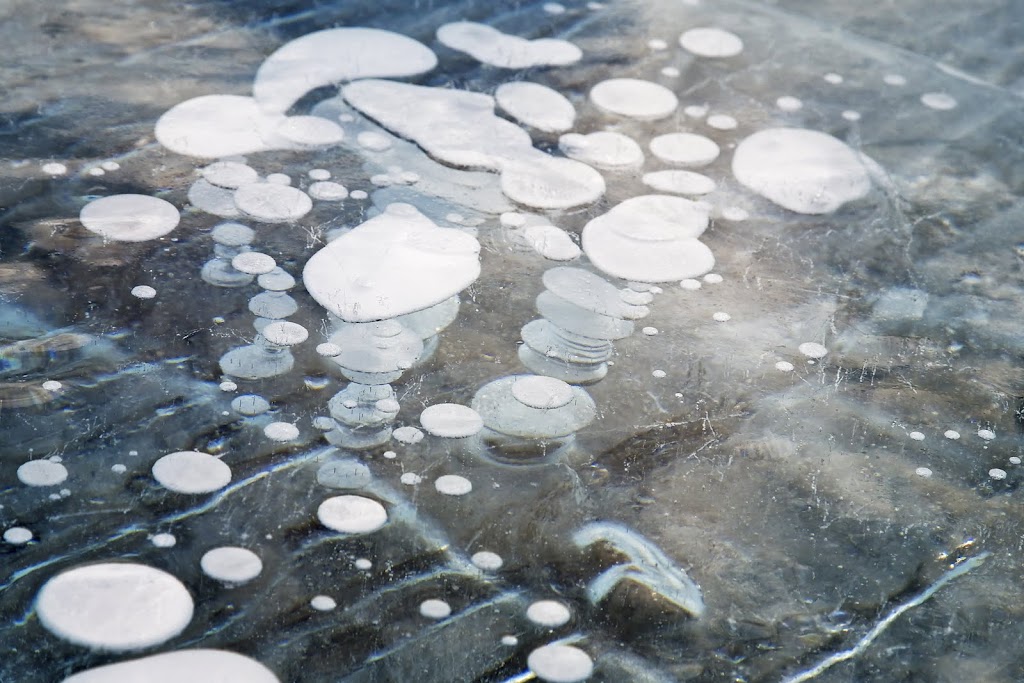 The ice sheet itself is equally beautiful and varies its colour dependent on the angle of viewing, sunlight and ground colour beneath. 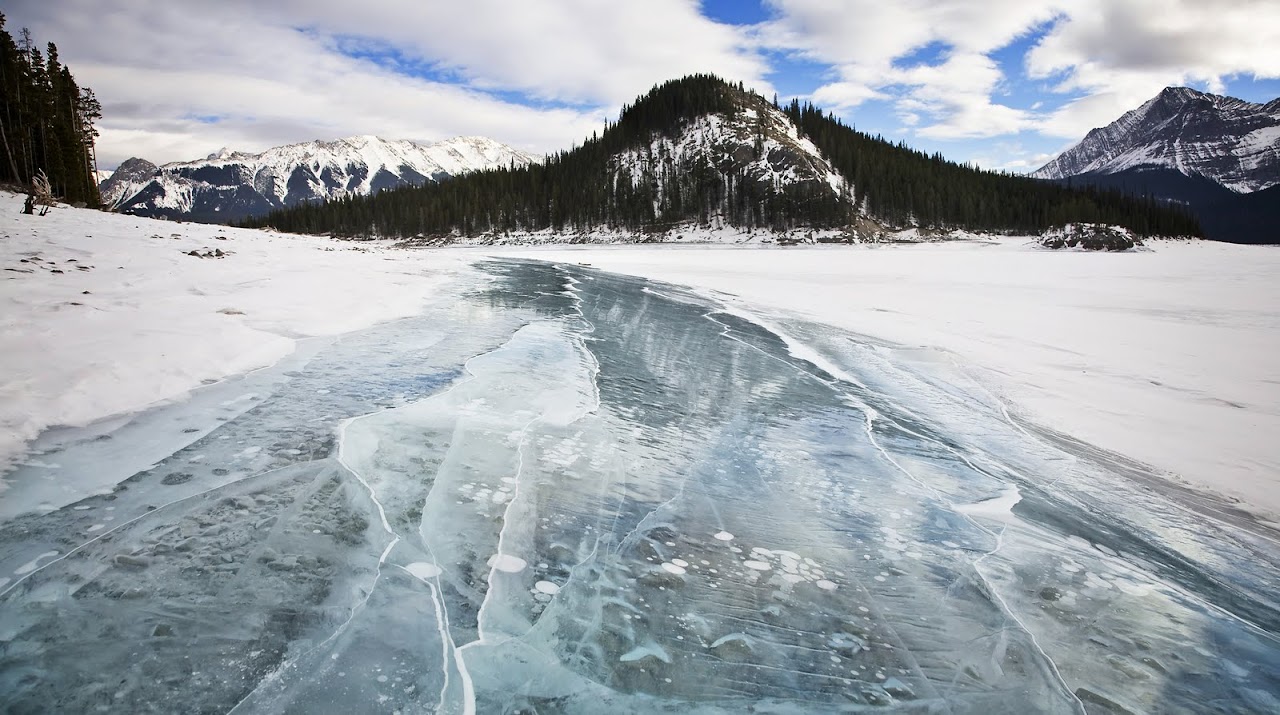 I think what intrigues me the most about these towers is that one tiny deflection in the ice and they wouldn't line up at all, yet here they are perfectly aligned over and over again some more than 10 bubbles high. 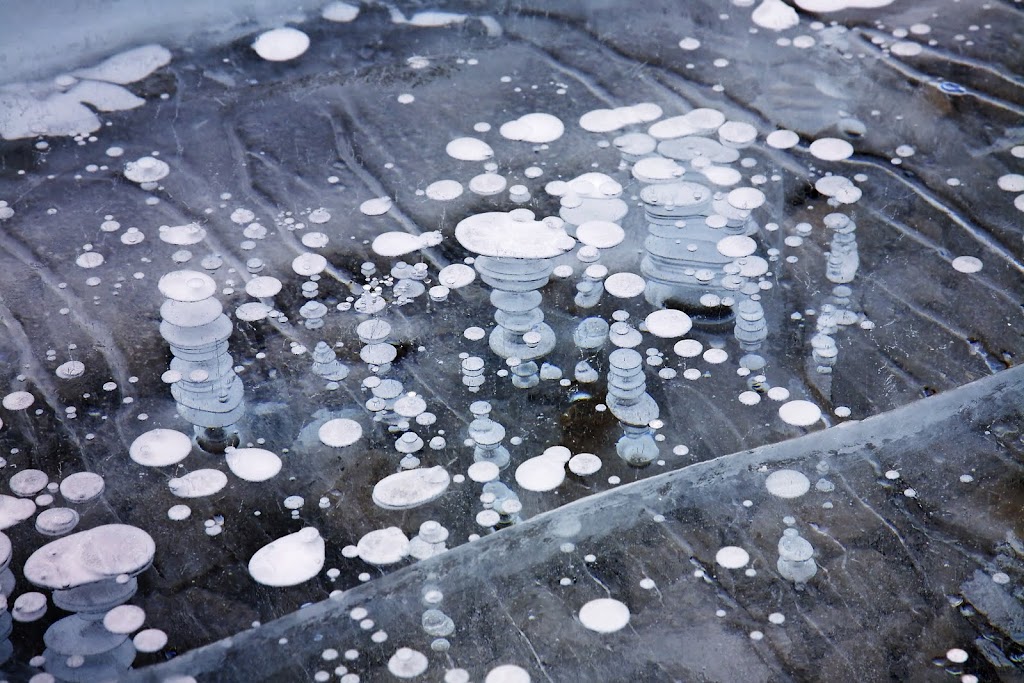 Some parts of the ice are beautiful just because of their colour, contrast or both as with this snow filled break. 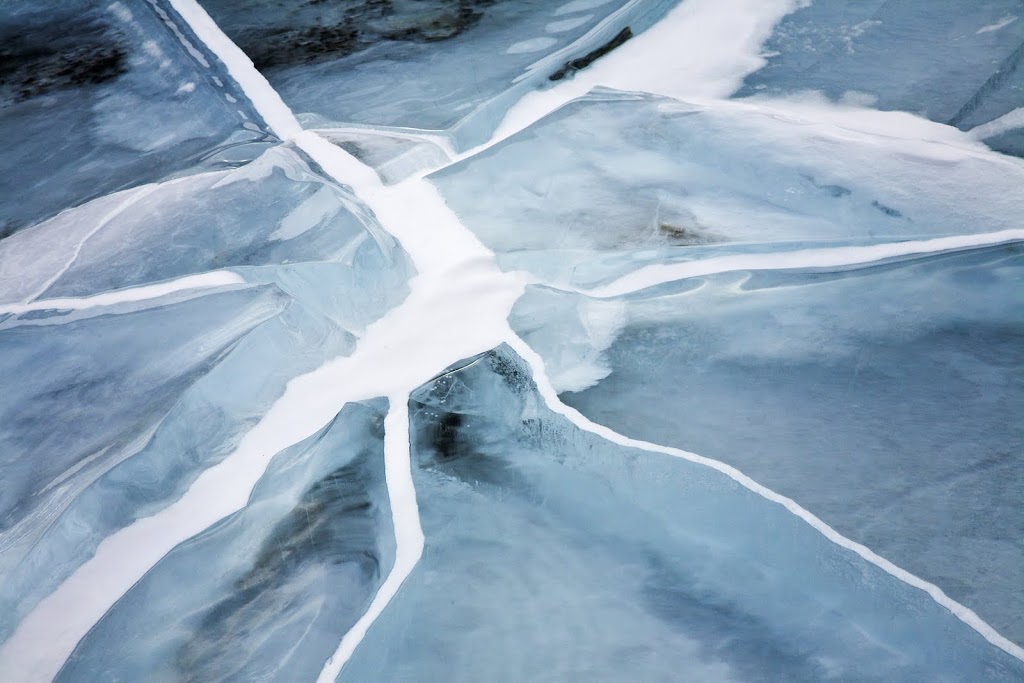 As I make my way along the shore I find more 'stackers' I assume that this side of the lake has a significant gas deposits to provide a constant supply of bubbles as it escapes to the surface. 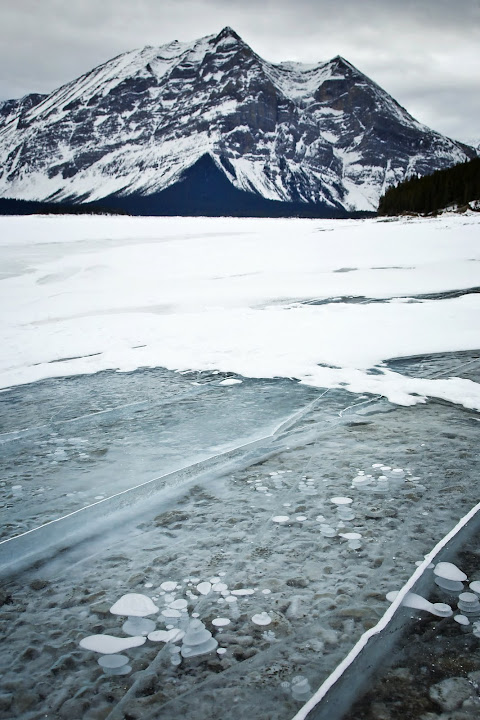 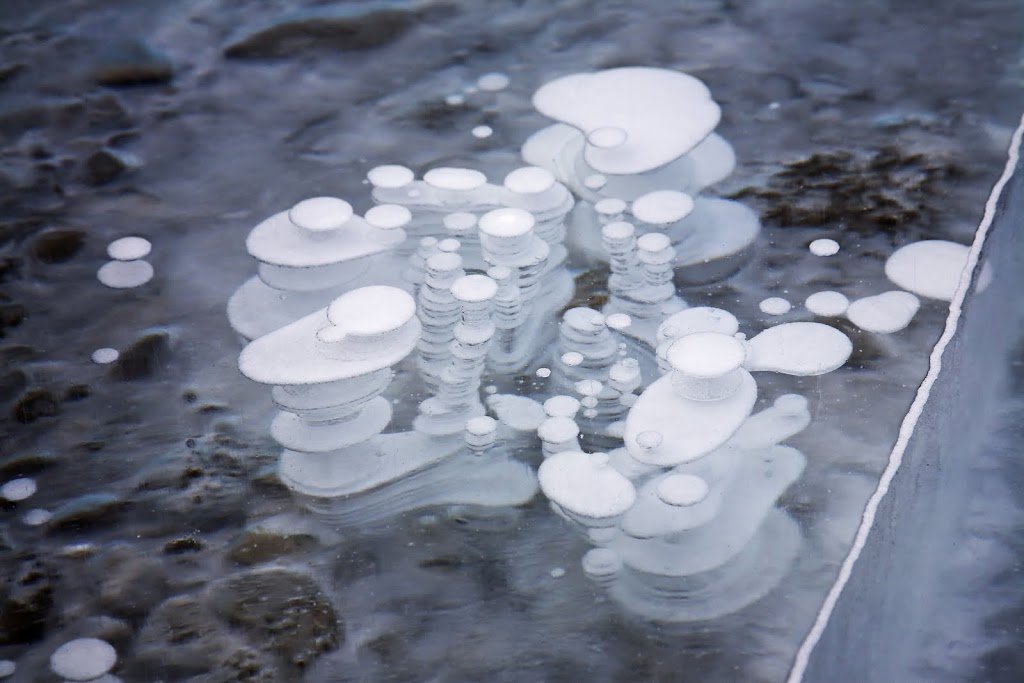 This is my attempt at an 'arty' shot, a broken piece of lake ice poking out of the snow has been softened by the warm chinook winds to a point where it looks almost like a computer generated drawing...beautiful. 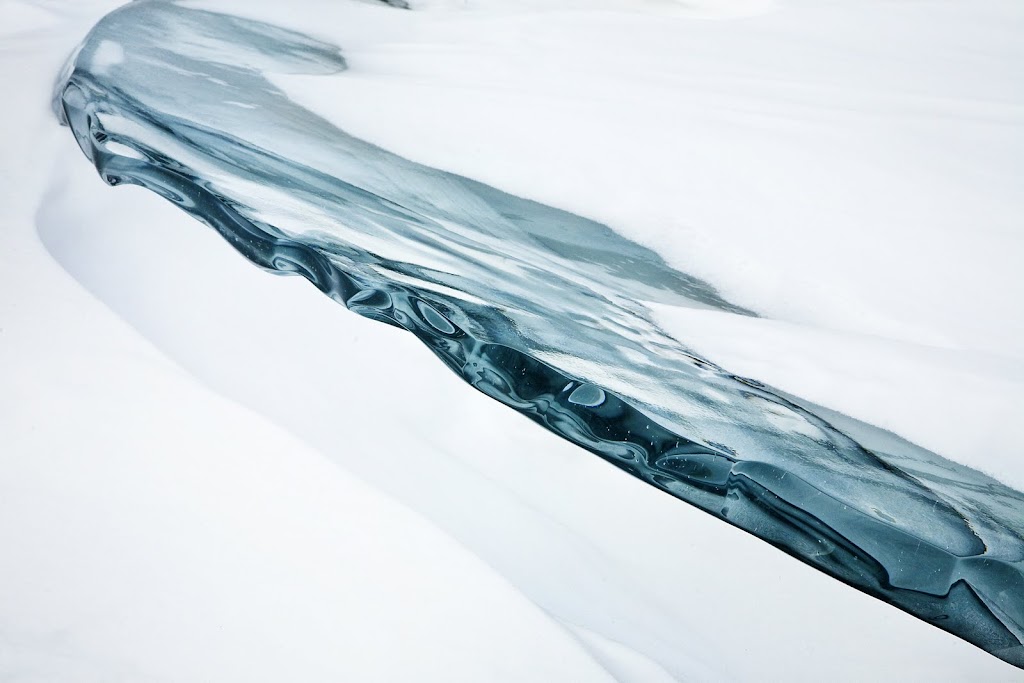 Carrying on around the shore toward the truck the bubble stacks finally stop appearing but the fantastic ice sheet remains draped across the shallows like a see through blanket, even as some of the colour is robbed by the clouds it remains a wonderful sight. 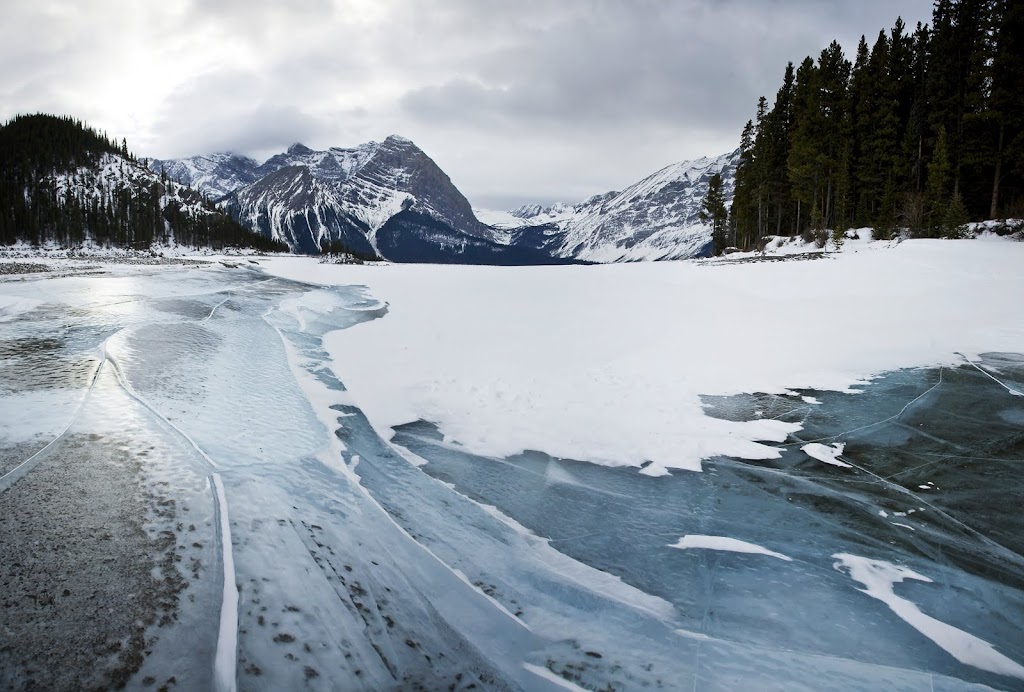 here the broken ice has been melted by the chinook winds and appears almost water like on the surface, it is incredibly slippery on this section but it was worth exploring to see this weird surface 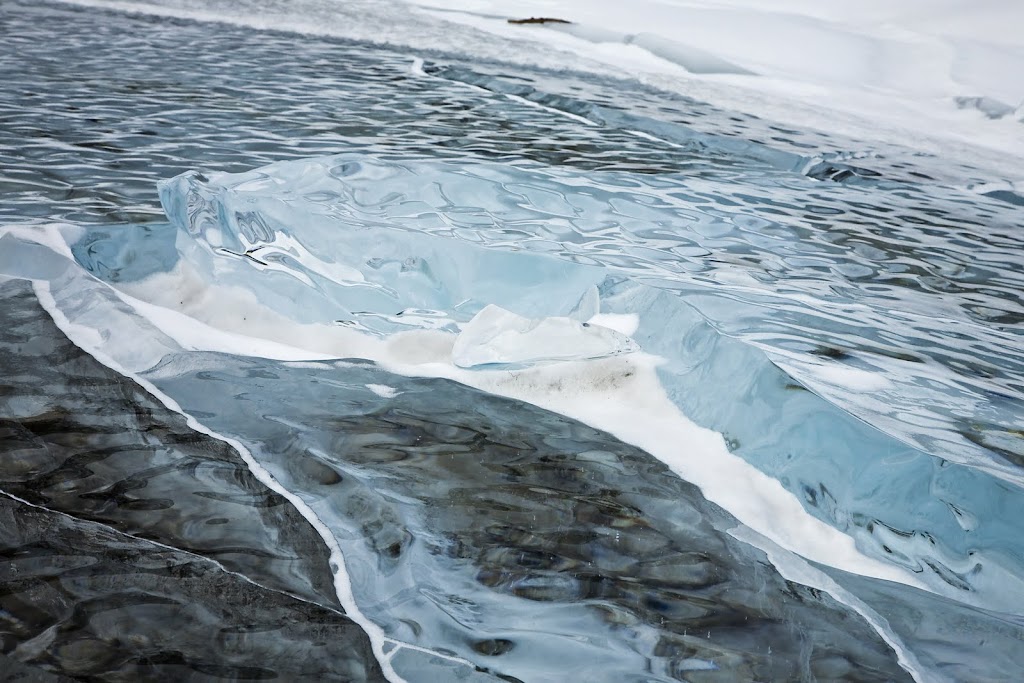 getting back toward the truck it's almost a shame to be reaching the car park, the wonderful solid wave of blue continues around the corner where just 5 months ago I was swimming....wouldn't fancy it today though. 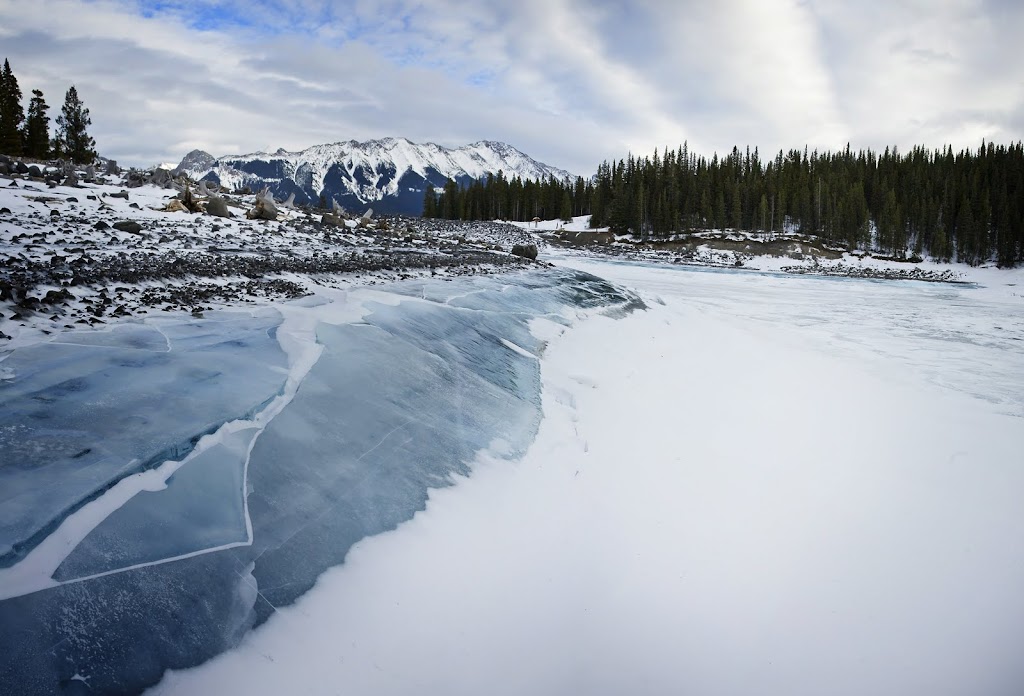 Weaving around the lakeshore has taken some time but has been worth every step, never have I taken such notice of ice, but I'm pretty sure I will in future 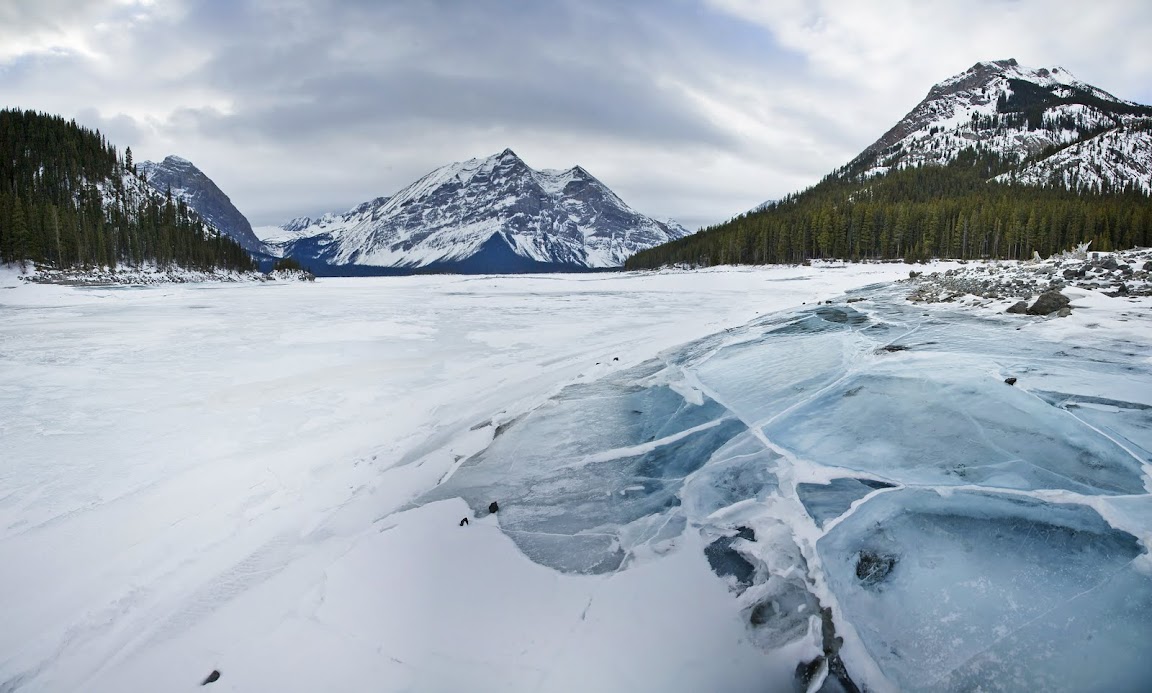 One last look across the lake, it is genuinely hard to leave today and I'm so chuffed at finding those bubble towers 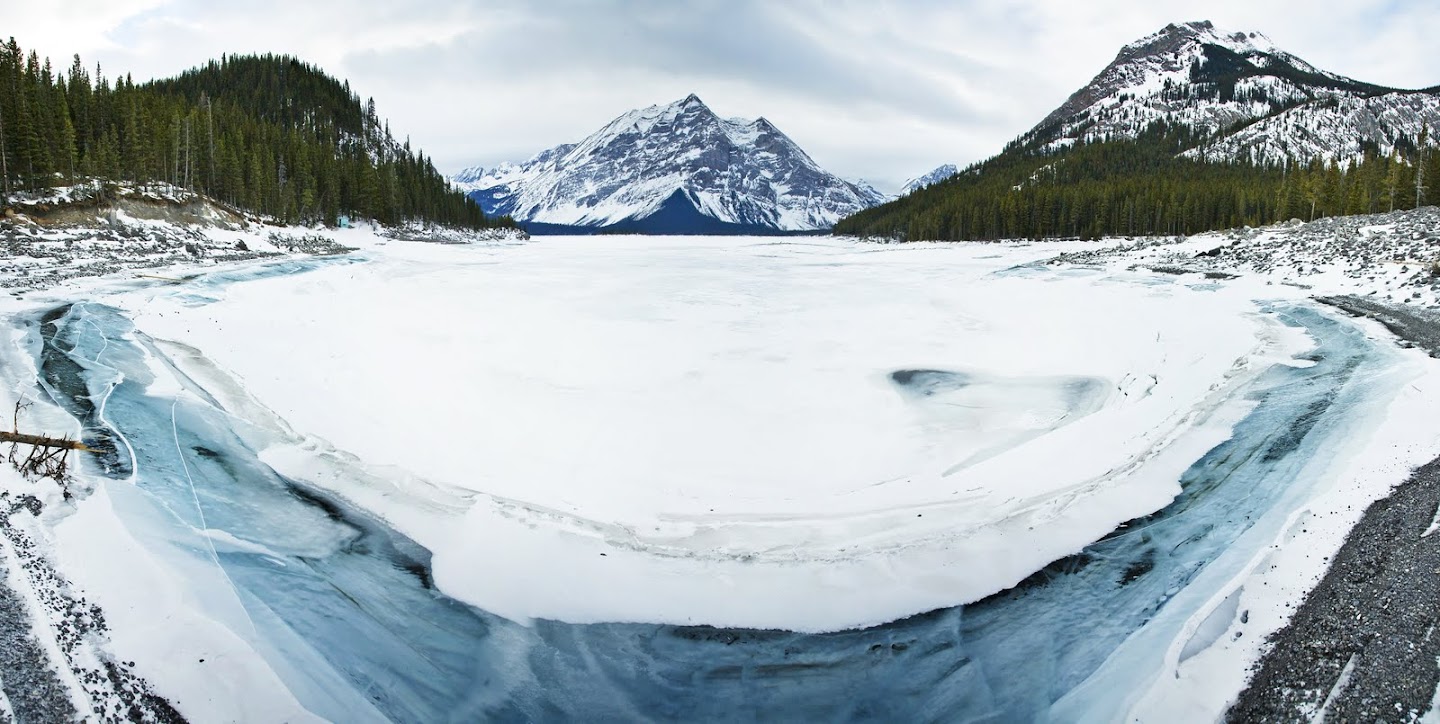 It's easy to see why we keep on returning to Kananaskis Lakes, it is a stunning area and always seems to produce something to make you want to come back again. 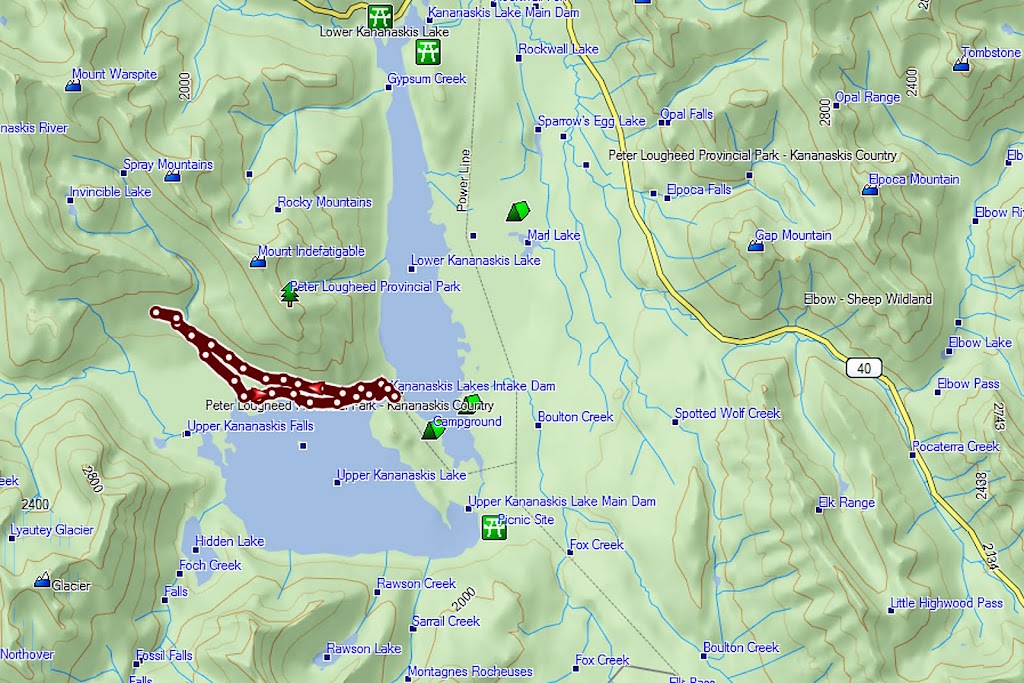 Wonderful report as always Chris, the purity of that ice is mesmerizing, has made for some superb photos.

Some amazing photos of the ice, Chris

Good to see you back Chris, some great shots you got there

johnkaysleftleg wrote:Wonderful report as always Chris, the purity of that ice is mesmerizing, has made for some superb photos.

Thanks JK, I went back today with a wide angle lens to make some better shots........it's all covered in snow

Thanks Susie, I must have been very lucky with the timing as it's all snowed under again now

Johnny Corbett wrote:Good to see you back Chris, some great shots you got there

Cheers JC, great shots are easy around here, even though I felt I 'left some out there' ...but then I always do

Cheers Dave, one of the best 'finds' I've ever made on a hike

What I'd give to get my camera to them bubbles. Lovely shots, lovely views, gorgeous!

ChrisW wrote: this really is a favourite place for Sarah and I and though it's 1.5 hours from home the journey is beautifully scenic and time slips by as you drift through the mountains on empty

mikuro wrote:What I'd give to get my camera to them bubbles. Lovely shots, lovely views, gorgeous!

Thanks Mikuro....I returned today with the right kit to capture them but they were under a fresh snowfall

, but I did get some others and a great wolf encounter, it's all in my latest post