Having climbed Kilimajaro in 2012 my hubby and I decided to set our sights a bit higher - 700m higher on the glaciated Himalayan Peak of Mera, widely marketed as Nepal's highest "trekking peak". We booked with Jagged Globe who were fantastic throughout.

We arrived at the Summit Hotel in Kathmandu on Saturday October 26th where we met up with the rest of our party, there were 10 of us in total and a British guide - Ian Barker. We had a kit check and headed off to bed after dinner to re-pack and try and get our bag weights down as much as possible after discovering the weight limit for the Lukla flight was on 15kg. The extra bag of haribo sweets and the can of dry shampoo sadly had to go.

We had an early wake up at 0400 to get to Kathmandu for our early flight to Lukla. We were delayed initially but took off at 0615 only for the plane to have to turn back to Kathmandu as the pilot was unable to land in Lukla due to bad weather. Things weren’t looking good and we were informed no flights had made it in to Lukla for the previous 3 days – a hangover effect from a cyclone that had hit India the week before. We were back up in the air again in minutes however and this time the pilot managed to land through a gap in the clouds, we were treated to our first tantalising glimpses of the Himalayas through the clouds while up in the air. Once safely on the ground in Lukla we walked up to the Tara lodge where we met our porters and sherpas and soon departed on the trek. This saw us immediately descending steeply from Lukla before a pleasant lunch stop and then onto our first camp at Poyan (2,800m). It rained overnight but we were greeted with clear skies in the morning and the first glimpses of alpen glow on the far snow capped peaks to the east. 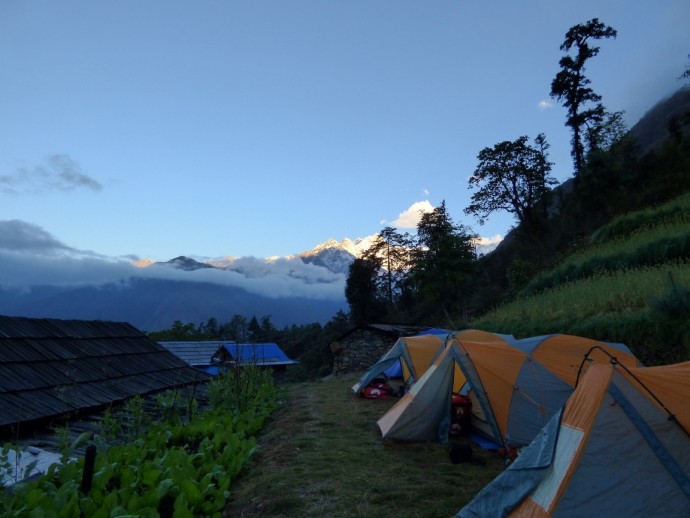 On the next day we turned off the main trade route passing a slaughtered yak in the middle of the path and now started climbing steeply up through thick forest to a tea shop where we were treated to chai tea and I was able to start dishing out my first batch of felt tip pens to the very cute, albeit bacteria covered children!

After lunch we had a very steep ascent through the forest to the campsite in a lovely setting at Pangkongma in the grounds of a tea house. We had tea inside and we treated to the privilege of 4 monks chanting prayers and giving blessings to the householders. There was more rain that night accompanied with thunder and lightening but once again it cleared overnight and we awoke to blue skies. After a short steep ascent the next morning we arrived at the Takshindu monastery where we were welcomed by the same monks who had been at the tea house the evening previously. They offered us Tibetan tea which should come with a health warning – its made with buttery Yak milk and is really salty, definitely an acquired taste. At the next tea shop at the top of the pass we were treated to our first views of Mera in the distance – it looked a long way to go! 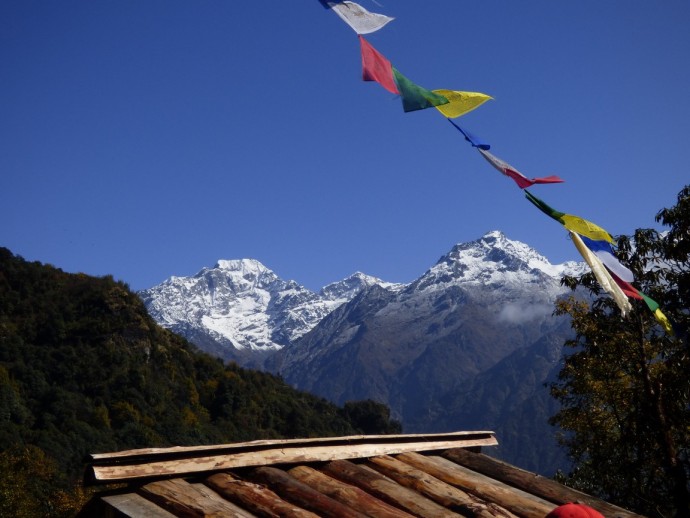 Following this we had an epic descent all the way to the valley floor, a descent of over 1100m which was tough on the knees but ended in an idyllic lunch spot on a sunny grassy terrace overlooking a waterfall and the Hinku Khola where we relaxed a sunbathed after yet another great lunch by chef Arjun. 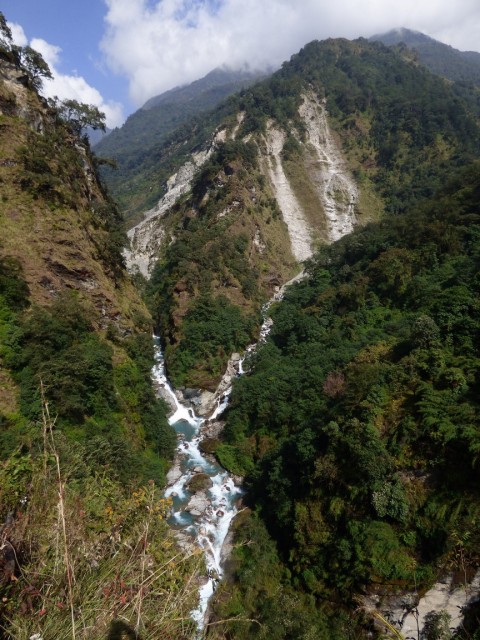 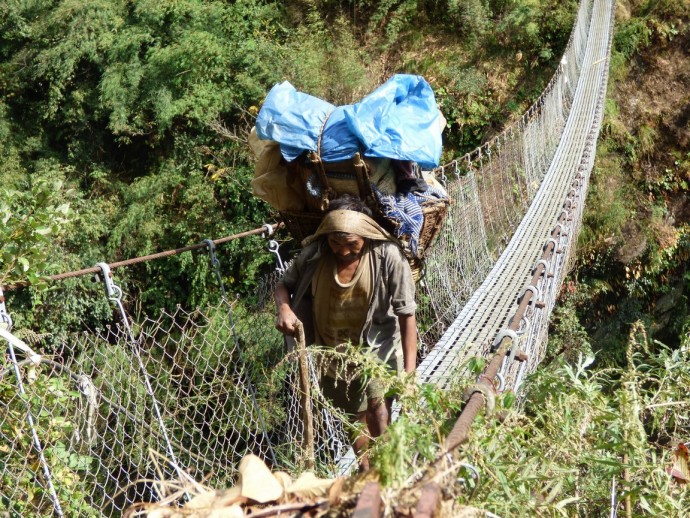 After lunch we trepidatiously crossed a rather rickety wire rope bridge across the Hinku Khola then re-ascended 900m back up to our next camp after a long, tiring day. The camp site was on a grassy terrace which smelt of herbs and we had our first meal in the mess tent at Nashing Dingma. The weather was rather dull and grey, the clag was in which made the village a rather dreary, depressing place firmly still entrenched in medieval ways of life. It lived up to the name we gave it “Village of the Damned”. After breakfast we walked through the village, giving away more pens, and had a gradual ascent to our very early lunch spot at 10:30am in a boggy field. After lunch we continued to climb up though forests of rhodedndron and bamboo to the campsite at Chalem Kharka (3,600m). Sadly the clag continued and the weather was noticeably colder. There were mutterings from the guide and Sirdar that the weather was “unseasonable”. The next day saw the clag in for more of the day. We ascended very steeply in the morning to a high “notch” at 4100m where the altitude started to make itself known. The thick fog prevented any good views of some lakes we passed as we descended slightly again to our campsite in a massive hanging valley reminiscent of the Lost valley in Glencoe on a vaster scale. It was a rather foreboding place and bitterly cold and due to concerns we could become snow bound if we stayed there our guide decided we would miss our rest day and press onto the next day. Thankfully the next day dawned brighter and as we climbed steeply out of the hanging valley there were great views back to our previous nights camp. We gently curved around the side of the mountain and then plunged down once again into the thick forest to have lunch by a waterfall in the forest. 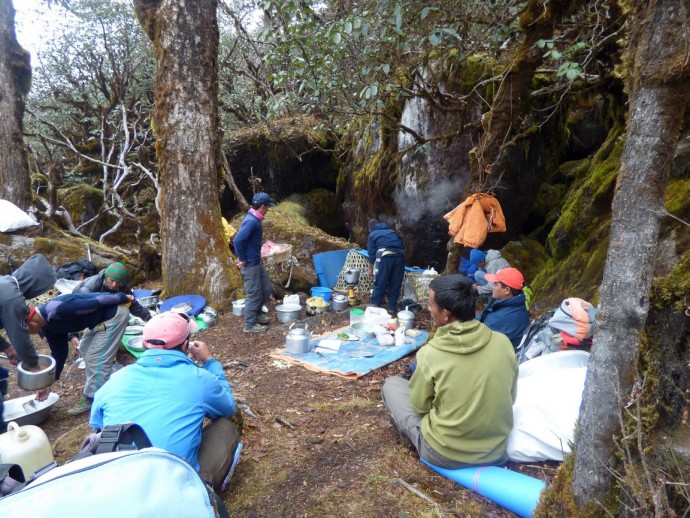 lunch in the forest

The afternoon was spend once again descending very steeply down a muddy track to the valley floor where we crossed the Hinku Khole by wooden bridge and arrived in Kote in thick mist. The campsite was in a great location right by the river in front of a lovely tea house. Sadly it was mired somewhat by the poor weather and a horse with a broken leg that was being left to die in the field by the campsite which had me questioning Buddist ways somewhat...

In Kote I “enjoyed” my first hot shower of the trip, well, shower is a bit of an overstatement, bucket with a tap to be precise but it did the job and I dried off by the hot stove in the tea house. 12 years ago Kote was destroyed by a flood with the terminal moraine dam at the head of the valley broke but the village has grown up once again. 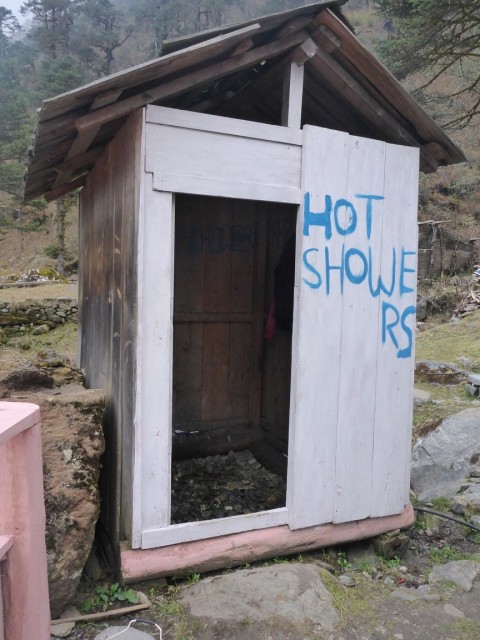 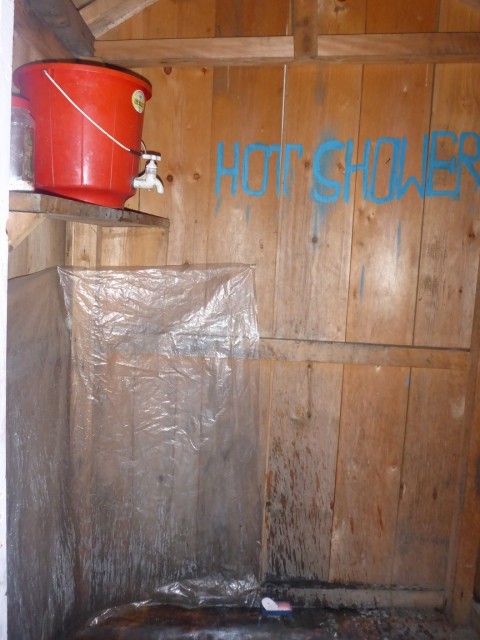 The weather had improved again the next morning and we set off on the long walk all the way up the valley of the Hinku. We rather ran up the valley as there were rockfalls continually peeling off the sides of the valley so we didn’t loiter as a result we were all pretty knackered when we stopped for a brief rest at another monastery which was unmanned before continuing up the valley. 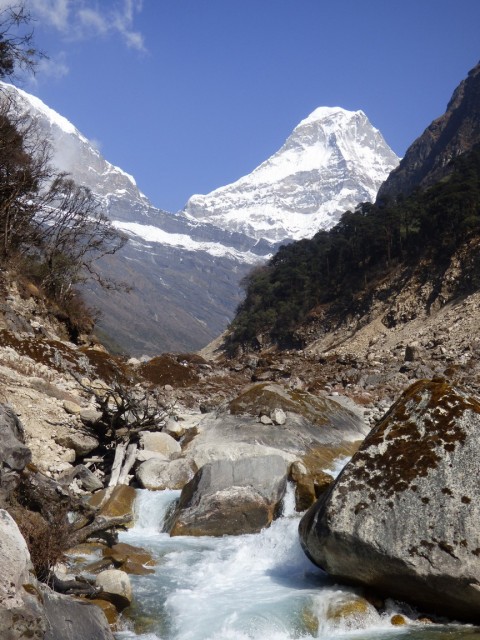 By now the altitude headache was settling in as we headed towards Tangnag and 4300m. We met another Jagged Globe group who were on a epic mission, having climbed Mera they were heading back down the valley, over the Zatwra La to Namche bazaar and Island peak because the Amphu Laptsa pass was blocked due to heavy snow. We arrived in Tangnag feeling headachey and lightheaded

and were glad to have tea in a lodge with a wood burning stove. On Sunday we finally had a rest day as god intended! We had the chance to do some much needed washing in the morning and in the afternoon practised some rope and jumaring skills which gave the headaches a chance to settle. We met another JG group who had attempted Mera but weren’t having a good time of it. 2 members had been evacuated from Tangnag due to HAPE and HACE and only 2/12 of the group had made the summit due to bad weather which gave us cause for concern.

The next day we were supposed to press on to camp slight higher up at Dig Kharka but we had received reports of very deep snow so the decision was made to spend another night at Tangnag but do an acclimatization walk up to Khare our next days objective. The walk crosses the vast terminal moraine at the head of the valley and evidence of the flood 12 years ago is still very obvious. 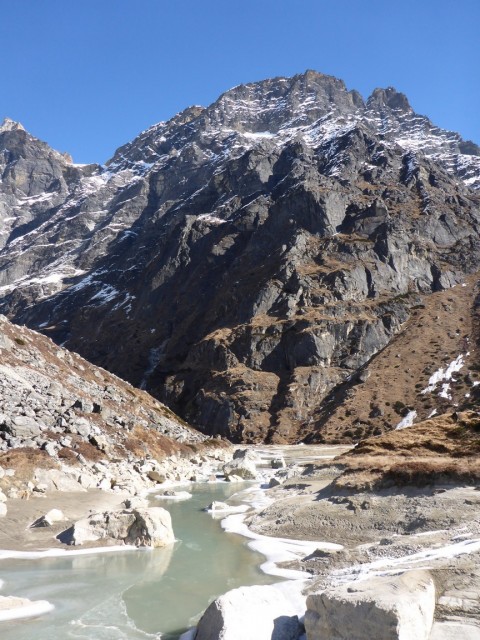 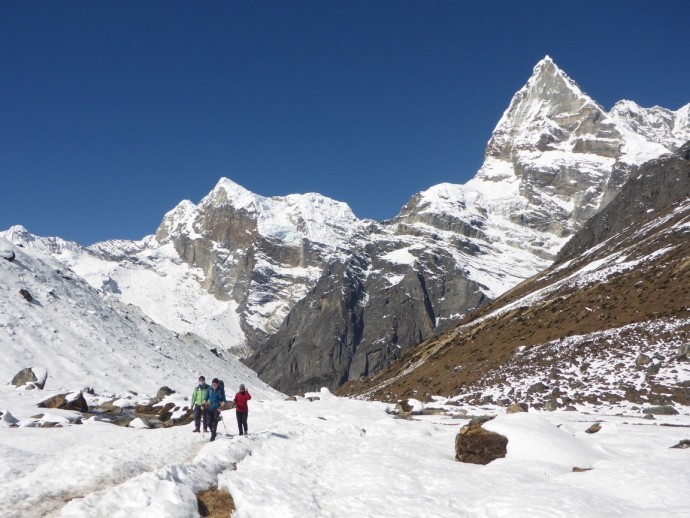 We were now into the snow several hundred metres earlier than anticipated, although there was not as much as stories had led us believe I think we were all happy not to have camped at Dig Kharka especially with frequently avalanches peeling off the face of Mera beside where we would have camped. What a wonderful opener to your incredible trip (so far), slaughtered Yak, that poor horse left to die

Tibetan tea which should come with a health warning – its made with buttery Yak milk and is really salty, definitely an acquired taste.

This made me laugh, as my son once said about whiskey....."if it's an acquired taste, how the hell do you acquire it after the first time"

Will be tucking into part two very shortly