The intention was for this landmark to be reached on a spectacular snow covered Corbett back in February, but those best laid plans got blown away in the high winds and deep soft snow.

So rather than Streap or Garbh Bheinn, here we were at the bottom of the heathery lump that is Carnedd y Filiast. Who are ‘we’? That will be me and my scruffy herbert of a terrier, Monty Dog. This was a big day for him too, he was now one year old and this was to be his first ever mountain.


our_route.gpx Open full screen  NB: Walkhighlands is not responsible for the accuracy of gpx files in users posts
Climbing Carnedd y Filiast from the north is pretty straight forward. Start at the farm of Blaen Y Cwm at the end of the road, follow the tarmac track to the top of the pass, then left through the gate, follow the faint quad track to the pools on the top of Waun Garnedd-y-filiast (a Nuttall apparently) and then follow the fence up and down through heather and bog to the large cairn and neighbouring trig point.

The list of 500 includes Munros, Corbetts, a smattering of Grahams and Donalds, and the rest are Hewitts – no bolstering it with tops of varying description or classification. 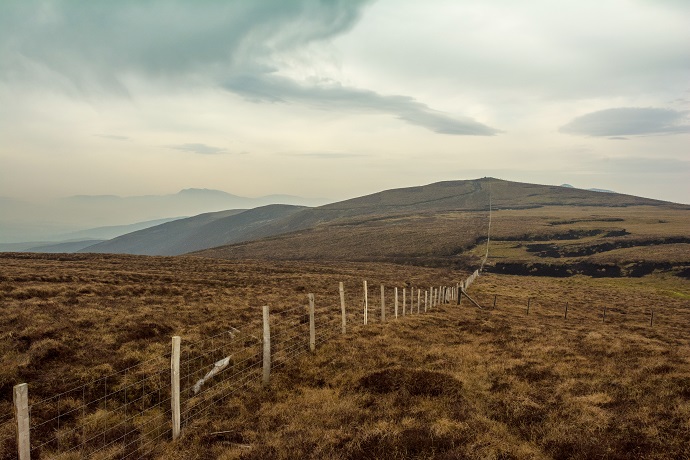 I have to say that Monty and I were both pretty happy with mountain number 500 – or number 1 in his case – decent view (which would be very good on a clear day), it was only raining a bit, and for Monty there were quite a few Meadow Pippets to chase….. 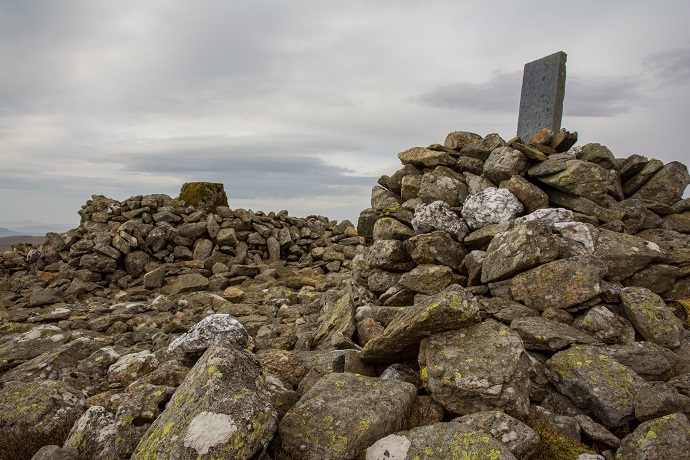 I had to take a picture of him on top of the trig point of his first mountain, even though it does show him to be the shabby specimen that he is. However, I wouldn’t change him for the world. He goes with me everywhere, a little hairy shadow with wonky ears. 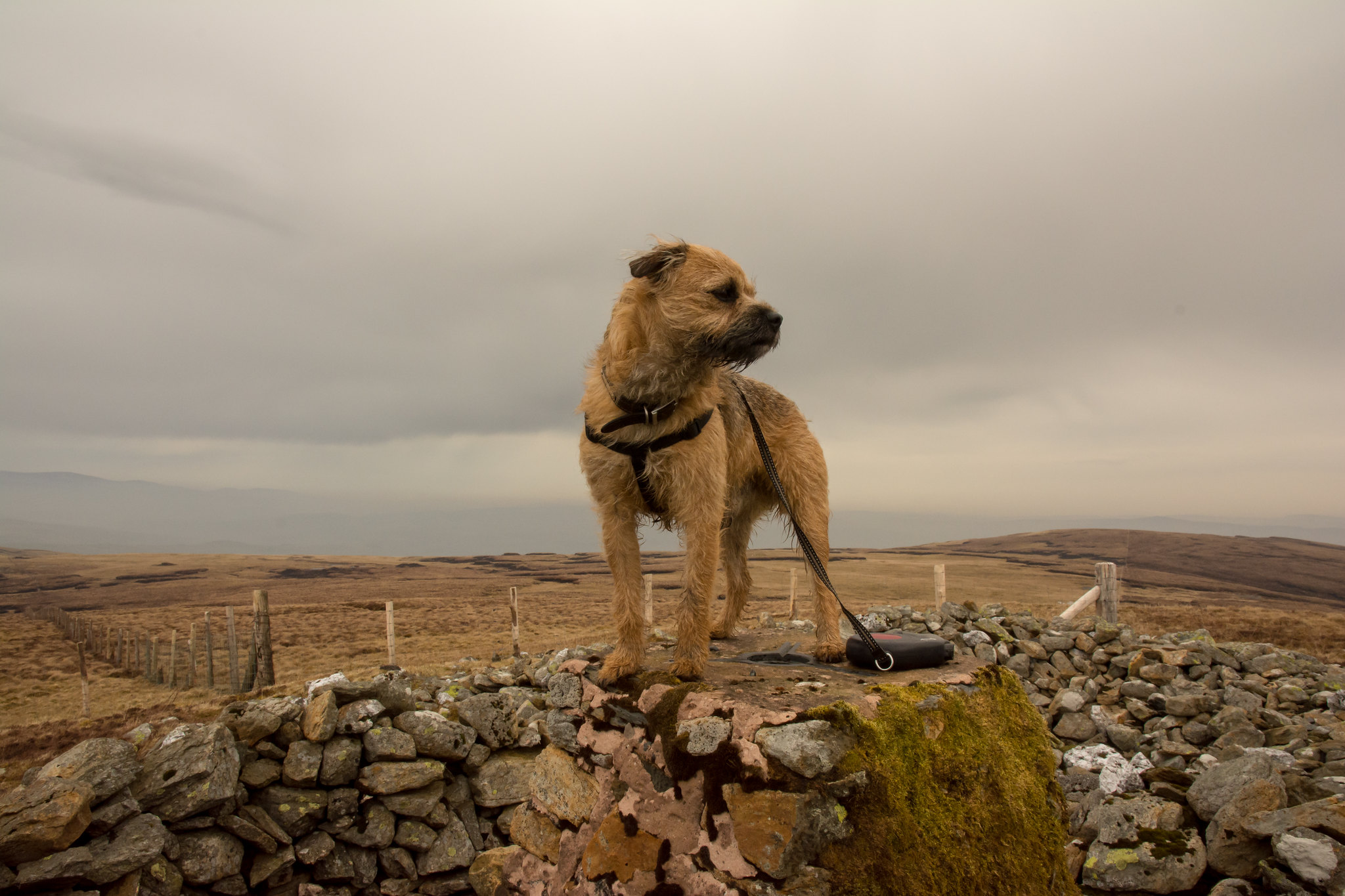 Monty Dog at the top of his first mountain

We hadn’t seen a soul up to this point, but just below the summit we met a very interesting chap with the most impenetrable valleys accent I’ve ever heard, which is saying something as I’m used to them being from Cardiff! He was barely equipped for the hills in his red hoody – but who cares, he was enjoying himself. Strikingly, looming out of the top of his rucksack was a large sign. This wooden board was expertly hand painted and bore the massage ‘If you don’t climb the mountain, you can’t see the view’. How very true! It seems he was lugging this thing to the top of Carnedd y Filiast to mark his 100th Nuttall, so fair play to him.

We were the only people on the mountain, and we discussed the likely crowds on Snowdon. We agreed the solitude of this place was something special - as he said, ‘It’s what it’s all about, pal!’. Spot on! We parted ways, and Monty and I made our way down again to Blaen y Cwm, with him on a tight string to avoid any regrettable encounters with the many lambs bouncing about the lower slopes.

We had time to take in another hill before heading back, so it was off to the neighbouring Foel Goch.

The northern route from the village of Llangwm is actively farmed almost all the way to the top, so the southern route may be preferable in hindsight. Despite the footpath signs, the route is not obvious, and hence there was plenty of fence hopping, with Monty on a tight rope to keep him away from the sheep. It’s only a short stretch to the top, taking about an hour. The summit is marked by an interesting collection of cairn, trig point, and a boundary marker that looks like a grave stone. We didn’t meet anyone until we got to the bottom again, where we met a couple of ladies on their horses, one of which was a fine looking animal; white with brown spots and apparently a direct descendent from those ridden by Red Indians – but as I know diddly-squat about horses, that could have been complete cobblers!

Very well done on the 500, Clive, and the only way should be up for Monty after starting with those two lumps!

Not sure you've exactly left the best of the Welsh Hewitts for last looking at your map... Finishing on a good one with Tal y Fan perhaps?

Thanks for that - and yes, as you suggest the plan is to leave the most northerly one to last.

....and I may well limit the pain by using a mountain bike on that 'road' to Moel Fferna!

It's great to see young Monty starting out on his mountain adventures, he looks a cracking little dog.

Well done Clive, and Monty too. So NOW you know what Carnedd Y Filiast summit looks like.

Cheers JK - yes he is real character, and he loves it in the hills. He may well be featuring in future adventures just like Hughie!

Thanks Charles - When I was researching the route using Malky_c's report, I thought 'That photo looks familiar.....'

Thanks Clive, the Munro bagging went ok despite deep soft snow in parts and some ferocious wind. Nabbed 12 in Glen Lyon and Lawers areas in the six days I was there. Wimped out of a snow plastered An Stuc though, maybe age is making me more sensible after all.

Cheers Charles - good stuff, and more successful than my last foray north! Glad you enjoyed it.

I remember coming down from An Stuc in the rain and was thinking that it was a bit steep!

(... I swear there were a load of other comments on the Outside Scotland bit - but they seem to have vanished??)

Proper dog! We've got 2 Borders. Looking forward to seeing more photos of Monty in due course.

Absolutely! Wouldn't have anything else.

As he follows me everywhere, there is a fair bet he will feature on these pages again.