With the weather predicted to deteriorate later in the day today, I decided to get a hike in before it did. I headed north-west into the Ghost Wilderness for a short hike I've been intending to do for a while now. Mockingbird Fire Lookout is a perfect early season leg stretcher, very popular with locals and frequently used by schools. For those reasons I expected to see a few vehicles at the roadside when I arrived but fortunately for me the roadside parking was free of vehicles and I had the place all to myself. 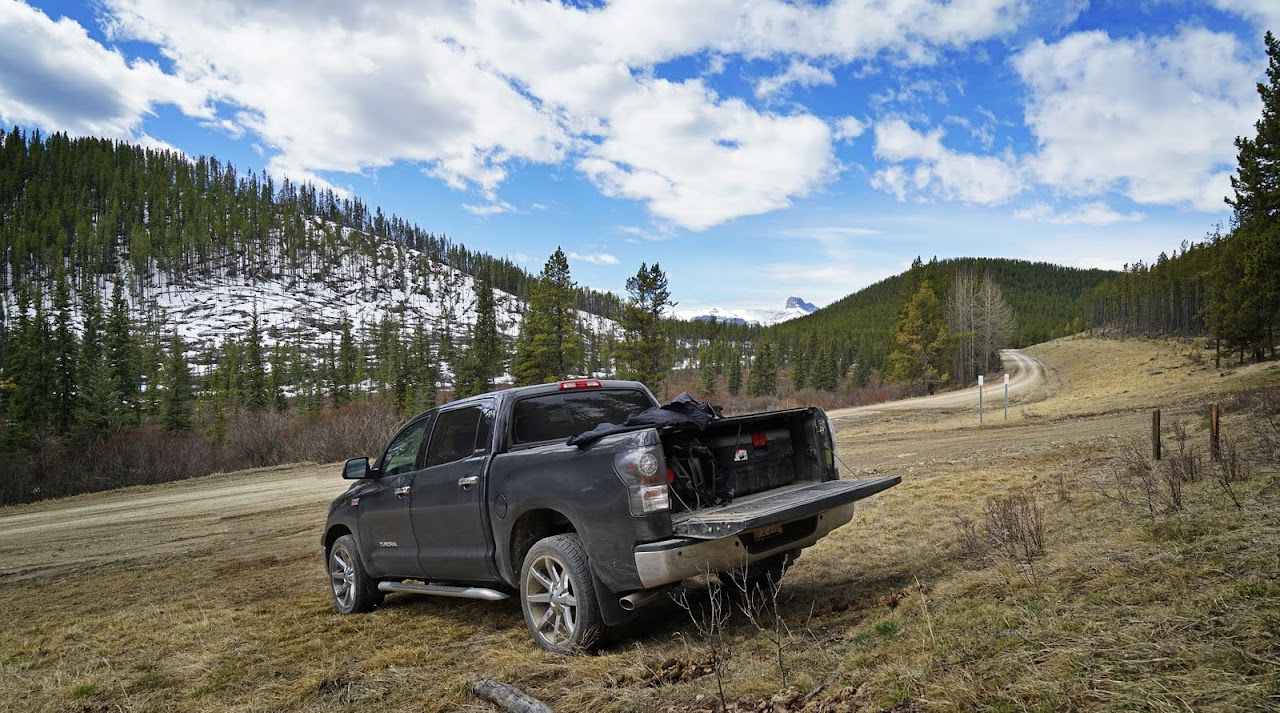 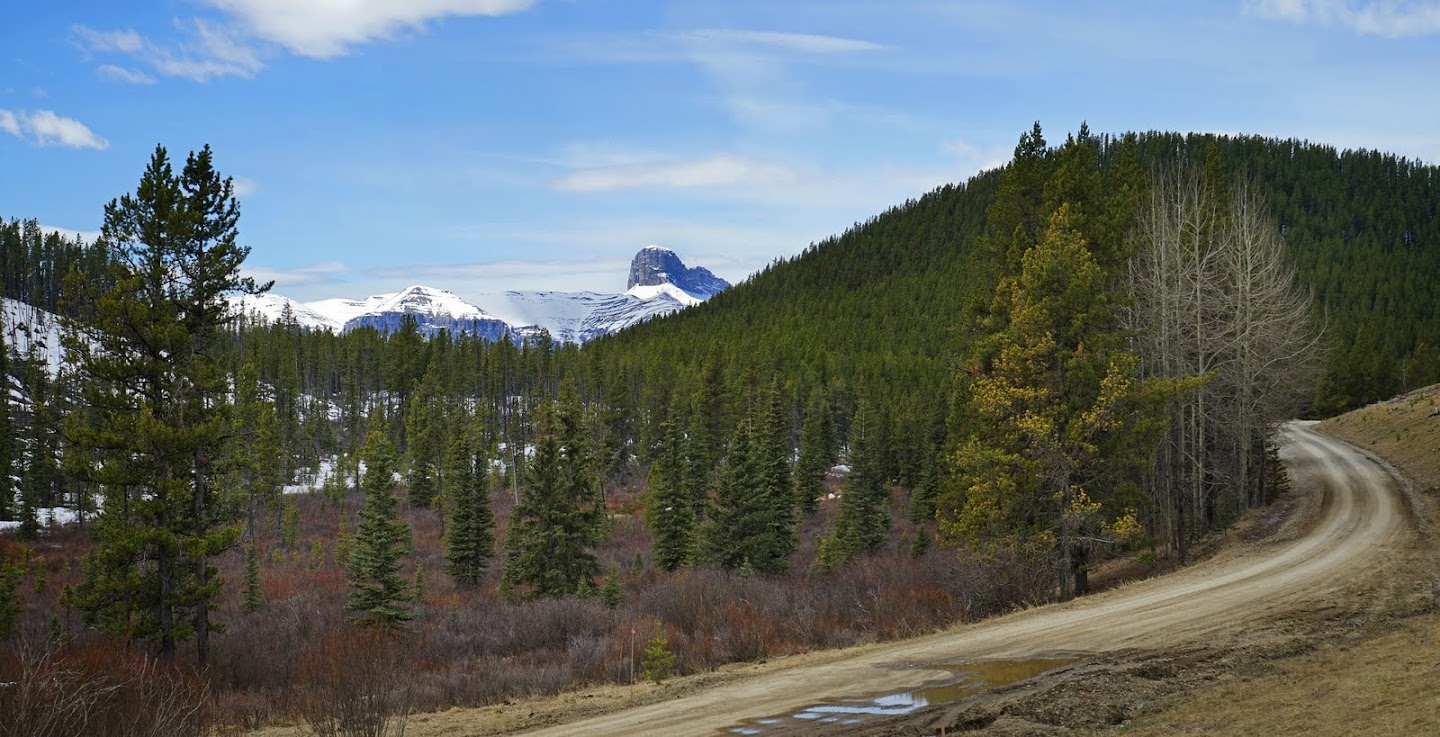 The entire hike is made along a broad fire road which today has plenty of melting snow still remaining even at trailhead level, the road is a little sloppy in places but still very easy walking. 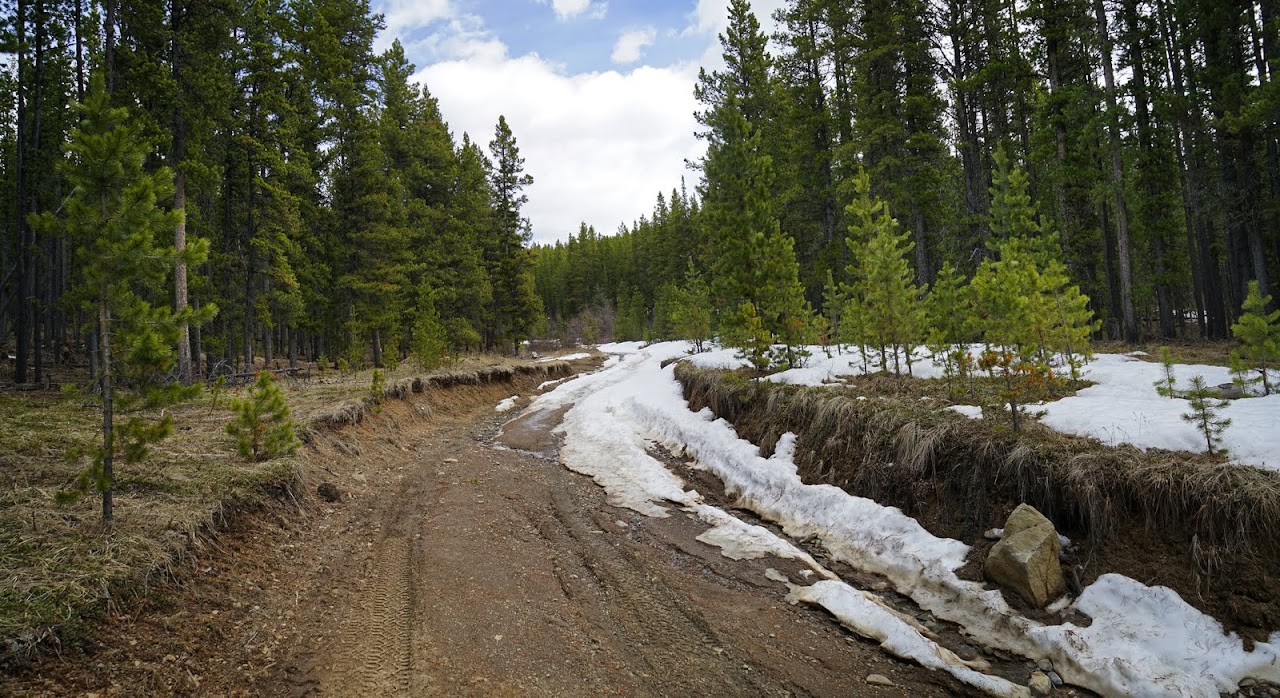 Throughout the hike the ascent is never steep and just makes its way in a continual rise from the trailhead, looking back is the only way to get any views as you wend your way up a series of gentle switchbacks 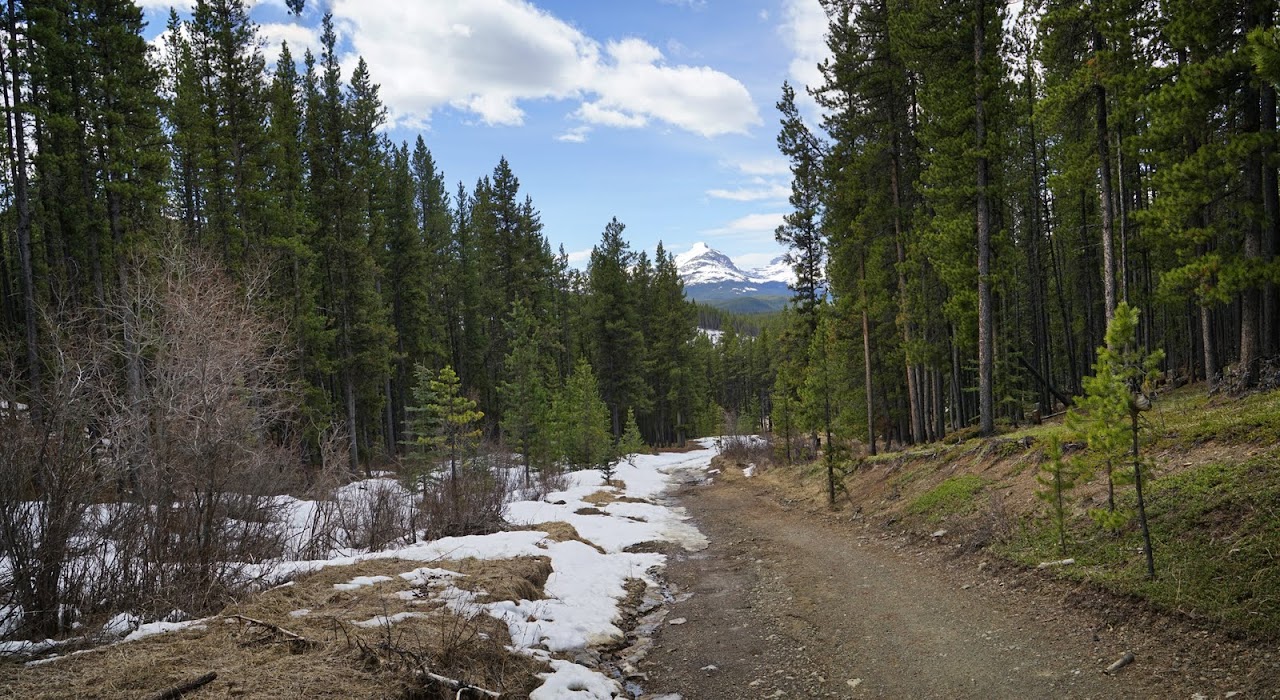 There are times when the trail is all but level and makes for a really enjoyable stroll, I can see why it would be so heavily favoured by local schools, wide enough for a party of kids and easy enough for all abilities. 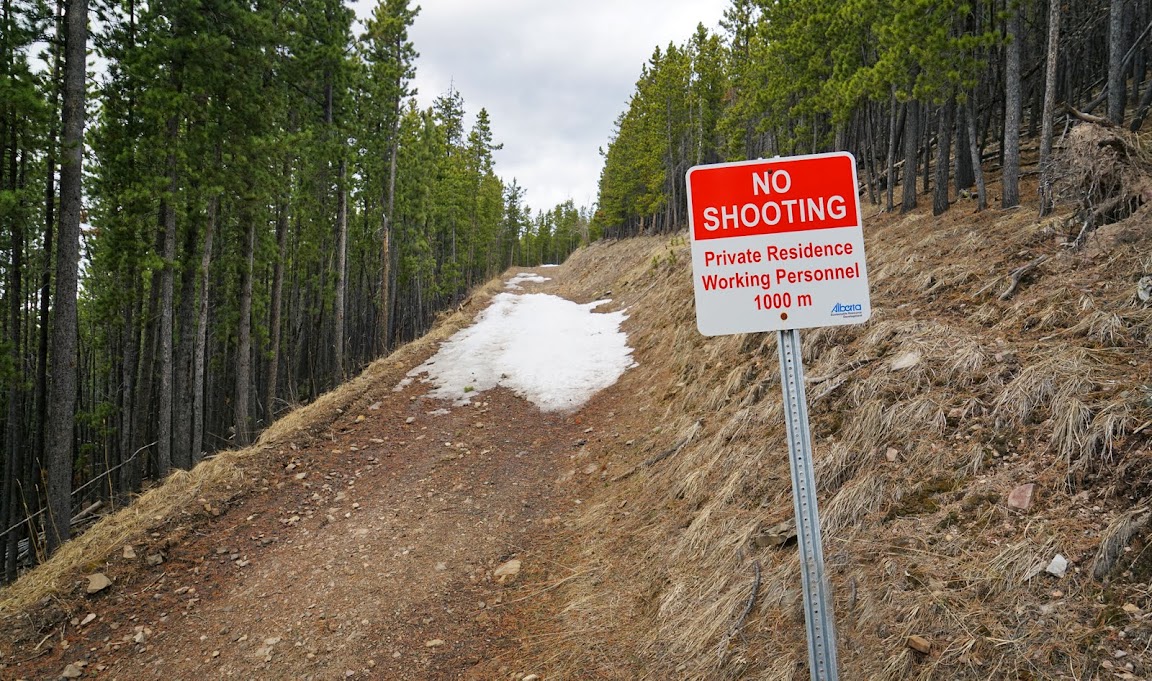 As I ascend further there is much more snow in the shaded sections though it has very usefully melted away from one side of the trail. Through the trees on the right you can see the previous length of switchback, as you can see from the picture the ascent is very gentle.

I still managed to find snow deep enough to poke a leg through a deep hole beyond the knee which left me looking at the snow in disbelief, it was like a cartoon where you can see a shallow little puddle and step on it and disappear. It made me laugh as I hauled myself up, after all it is funny....once. 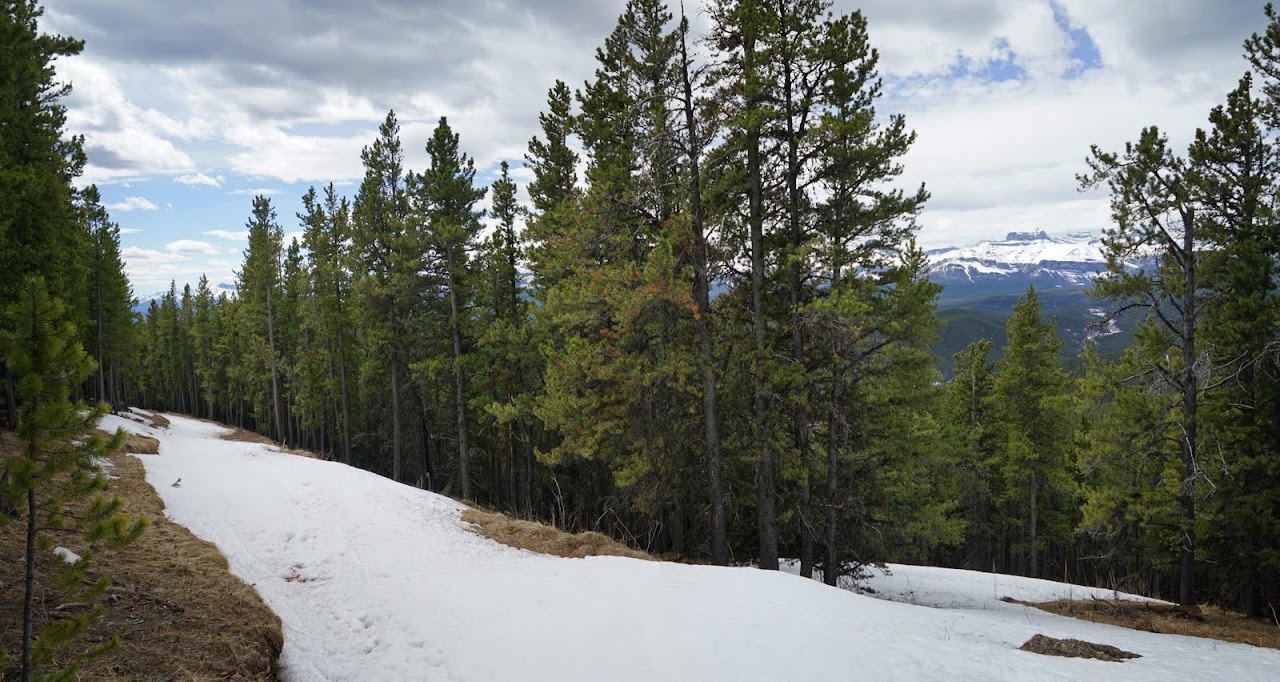 Closer still where another sign reminds the gun tote'n Albertans that some poor soul has to work up here and he would prefer not to be shot whilst doing so. 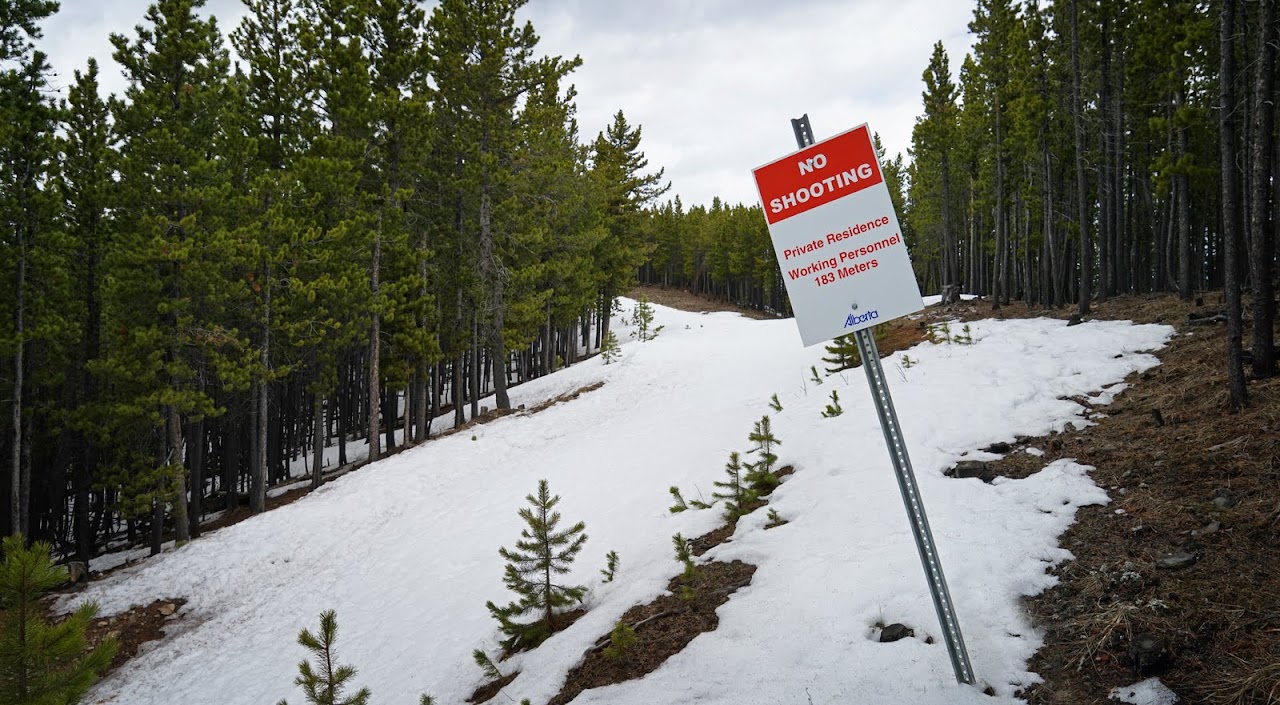 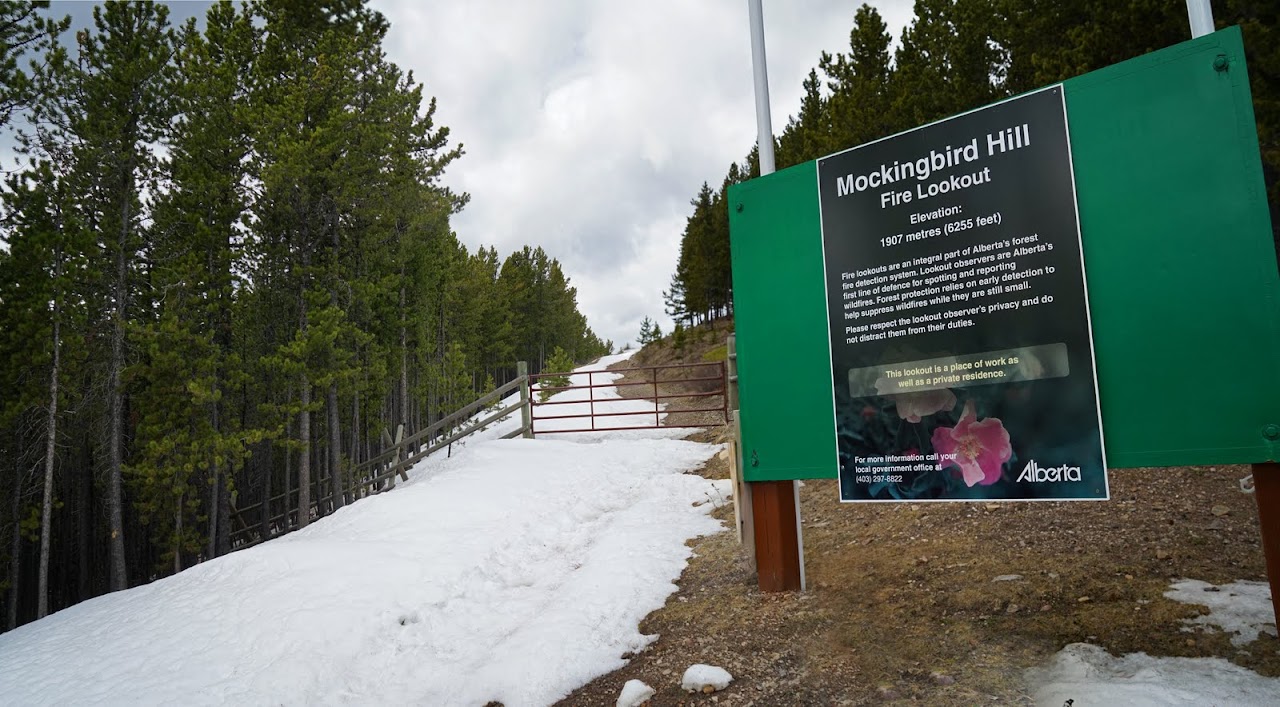 As I make the last few steps to the summit I see the helicopter that was buzzing around as I arrived at the trailhead, it was delivering the lookout and his initial supplies for his first day of the season. The same thing happened when I did Yates Mountain in April 2012 and met the lookout who was just setting up there too. 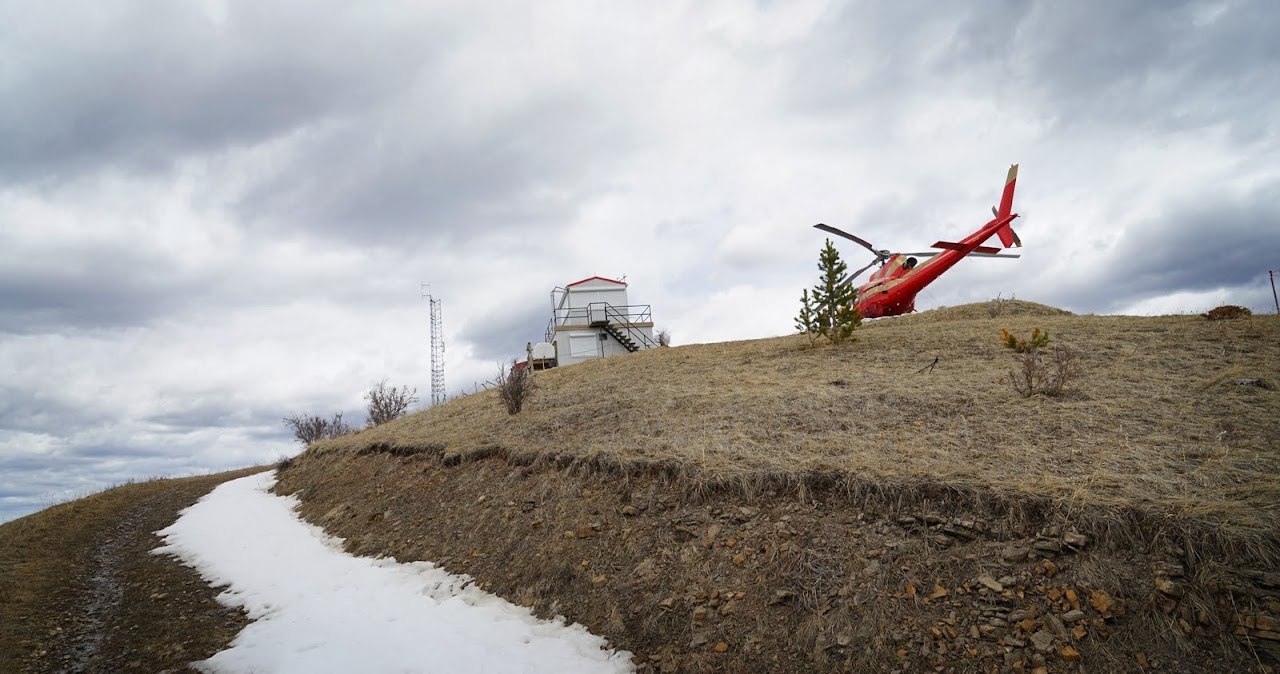 As you reach the summit and see the wide expanse of mountains to the west it is easy to see why the lookout was placed here. The view in both directions is staggering, it must be much more than 50 miles across the horizon and on a clear day like this is fantastic.

The view to the east is equally impressive, though without those wonderful snow covered mountains, even as I stand talking to one of the guys opening up the lookout the cloud rolls in preparing for the afternoon snow showers. 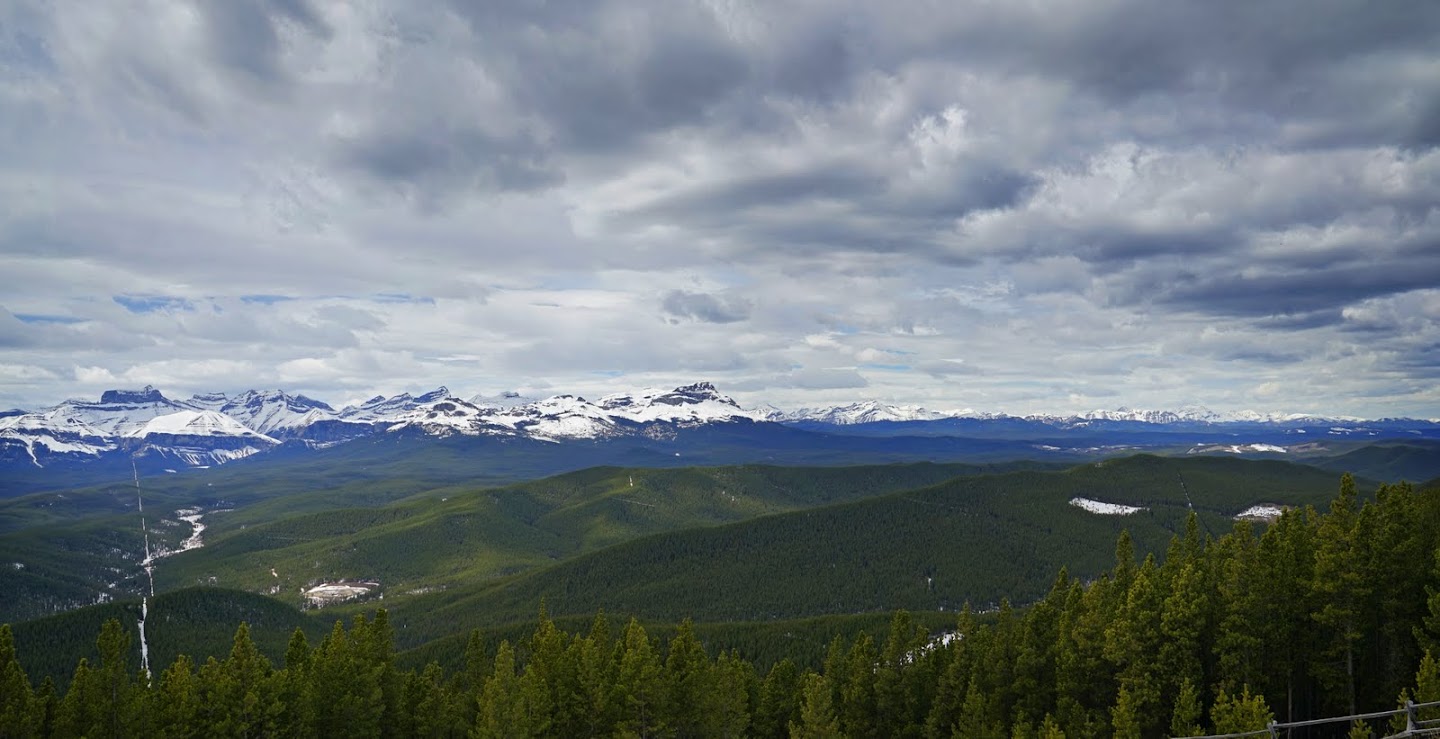 looking almost directly north past the communications tower for the lookout I can just make out the last of the blue sky being blanketed by the clouds. As a lookout you must see some incredible sights in a location like this, imagine the Aurora from here, or a lightning storm. 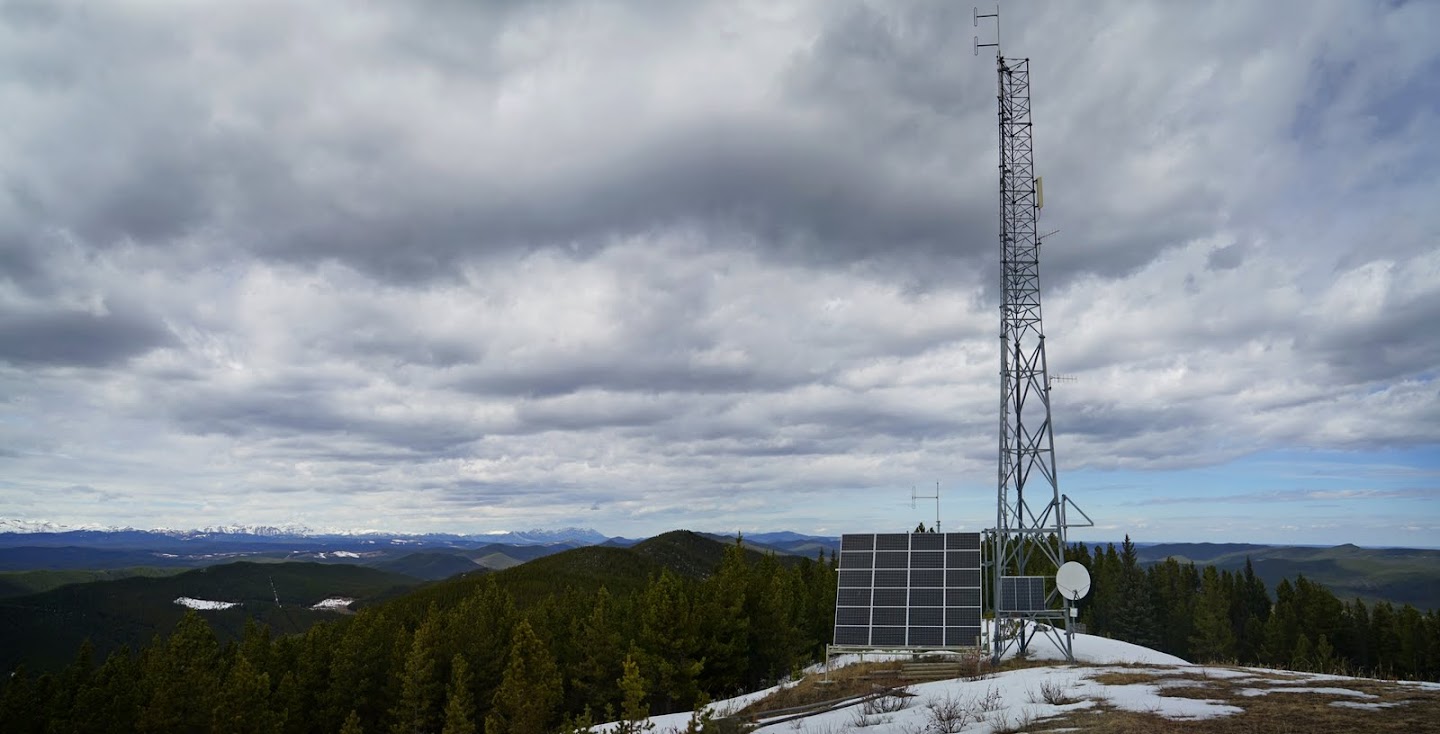 As I set off back down the hill reversing the ascent route I am struck by the small size of the lookout itself, living here for months on end must be quite claustrophobic. The current lookout was built in the early 70's to replace the original which was put in place in the early 1950's (when the song Mockingbird Hill was popular) which is where the lookout got its name.

This is a great little hike in an area I just don't get to often enough. I may try to explore it a little more until the snow melts out in Kananaskis. 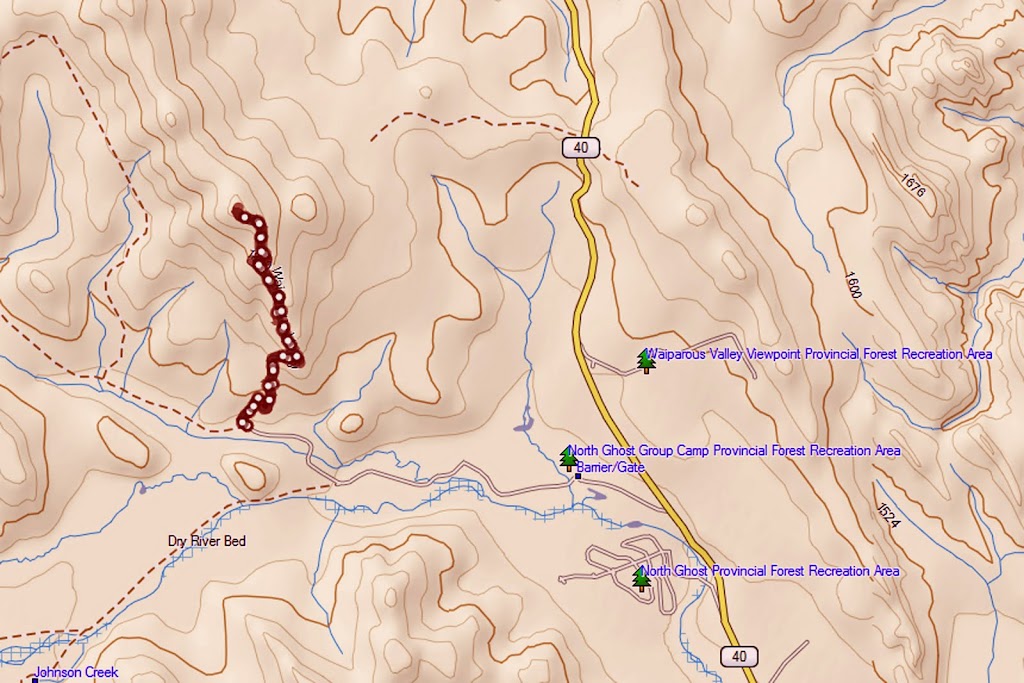 Oh that looked like a lovely gentle walk with AMAZING views. That no shooting sign made me laugh

Mountainlove wrote:Oh that looked like a lovely gentle walk with AMAZING views. That no shooting sign made me laugh

Thanks ML, shame that this will be the last for a while now, I'm back in London/Birmingham working for a month then heading to Florida for a few weeks....if I'm not careful it will be winter again and I'll have missed all the good hiking!!!

That's a lovely little stroll, Chris, but what fantastic views from the summit; just amazing!

Iv been missing for while I know and great to see that you are still on the site and providing us with those wondrful pictures.

I do remember the report earlier regarding the other Fire Lookout is that 2 years ago?

Thanks and hopefully as Arnold said 'I will be back'

I'm sure that the only reason you post these reports is to make us jealous! The panoramas look like the proof: really, 50 miles of views! Truly awesome. What's the job situation like there?

SusieThePensioner wrote:That's a lovely little stroll, Chris, but what fantastic views from the summit; just amazing!

Thanks Susie, one great thing about fire lookout towers is you're guaranteed a view

L-Hiking wrote:Hello Chris
Iv been missing for while I know and great to see that you are still on the site and providing us with those wondrful pictures.
I do remember the report earlier regarding the other Fire Lookout is that 2 years ago?
Thanks and hopefully as Arnold said 'I will be back'

Cheers LH, I'm missing now....roaming around England, just on train to Lincolnshire...we might see each other

The other fire lookout was 2 years ago ....where does the time go!!
It would be great to see some more of the Viking Way when you get a chance mate

Alteknacker wrote:I'm sure that the only reason you post these reports is to make us jealous! The panoramas look like the proof: really, 50 miles of views! Truly awesome. What's the job situation like there?


You should be job hunting in Calgary Mate, they carry a vacancy rate of 2500 at any given time because the city is expanding at a staggering rate they need people of all kinds to feed the machine.
As for Florida, its a lovely beach house with my grandson (and his parents