Hewitts included on this walk: Twmpa


Grabbing a nice morning before the storms for a return to Twmpa (or ‘Lord Hereford’s Knob’ if you prefer...), which I had previously only climbed straight up and down the eroded path from the Gospel Pass – this was a fuller and more satisfying route up the south ridge.

twmpa.gpx Open full screen  NB: Walkhighlands is not responsible for the accuracy of gpx files in users posts
Not much parking in Capel-y-ffin, but a few spaces for earlycomers, and almost immediately into a typically ‘Beacons’ steep ascent up to the ridge of Darren Lwyd. The faintish path is thick with bracken and pretty testing going, but it’s over quickly enough in favour of a very gentle couple of miles along the broad ridge to the fine summit on the edge of the fall away to the north. Twmpa from the approach to the Gospel Pass Starting the climb onto Darren Lwyd Black Mountain through the bracken The Vale of Ewyas The descent bridleway along the valley of the Nant Bwch is lovely, a well made path dropping gently above the stream, past a lovely little waterfall, to the village; a really fine short single-peak walk. Falls in the Nant Bwch Back up the valley 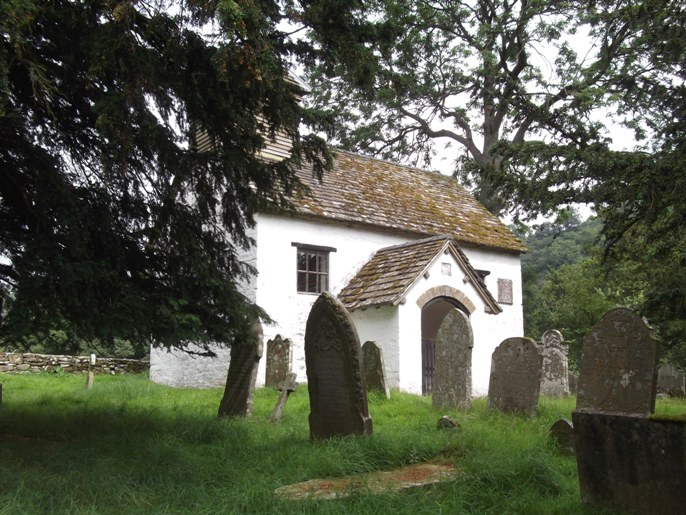 The little church in Capel-y-ffin

Afterwards, a surprisingly good short walk on Craig y Llyn, the 600m highpoint of the hills south of the Beacons.

craig y llyn.gpx Open full screen  NB: Walkhighlands is not responsible for the accuracy of gpx files in users posts
This isn’t an especially challenging approach, the road climbs more than 80% of the way up for you, but nice paths/tracks wend through the open edges of the forest to quite an attractive cliff above the eponymous Llyn Fawr reservoir. The views along the escarpment edge are stunning – an uninterrupted broad vista in which you can pick out all of the Beacons peaks. It might not be as good for much longer though, as – outside the protection of the national park – the summit and the area south are currently being heavily worked on by the windfarm engineers. The trig itself has been spared, but the fenced workings stop only a couple of yards away, and the preparations seem to be in place to block off a lot of the paths ‘until 2018’… Craig y Llyn over Llyn Fawr from the parking spot The Carmarthen Fan to Fan Nedd The summit is to the left of this little encampment... 'Pedestrians and Cyclists Beware' Hirwaun Common and the road up