after our over night stay in the cosmiques hut and completion of the cosmique arete, next on me and billy,s agenda was Mont Blanc. the weather for wednesday and thursday was to be good so we phoned to book the gouter hut. it was full and so was the tete rousse hut lower down. we consulted the mountain advice centre in chamonix, and they told us we could bivvy beside the tete rousse hut and make an attempt from there. a bivvy higher at the gouter hut was strictly forbidden. so we got our gear together and set off on the tuesday afternoon for the cable car from les houches to bellevue. from here you catch the lovely little train to the nid d aigle.
from the station its a 2.5 km walk with 800m of accent, with a little glacial crossing at the end just before the hut. once at the hut we set about finding a site to bivvy, we were on the glacier but managed to find a snow free spot and set about getting comfortable. billy at the bivvy

its 2-3 hours to the gouter hut and a further 4-5 hours to the summit from there, so we decided on a 1am start fro the bivvy. it was hard to sleep as lots of people were arriving at the site and just the general apprehension of the day ahead. it was a beautiful cloudless night and the stars were out when we rose at 12am. we got our gear together, and although i didn't realise at the time i made the big mistake of leaving my jacket at the bivvy !! we set of and in no time came upon the first obstacle of the day, the grand couloir. a place were rockfall is common, but it was night and very cold so we had no problem crossing. billy made a fine job of picking his way up the ridge, there seemed to be paths going everywhere. we could hear a couple of Americans of route in a gully to our right. we had to get our crampons on higher up as there was lots of verglass on the path. we soon got to the old gouter hut and roped up beside the new hut. there were already lots of guides with there clients starting off , and we took our place in the line upwards towards the summit. i didnt start to take pictures until sunrise but will try and juggle them to give you a sense of the route. straight away its a gruelling slog, the altitude, the steepness of the slope, the tiredness all take there toll. and its here i realise ive left my jacket. ive a very thin helly hansen tee shirt, a long sleeved rab boreas tee shirt and my mountain equipment fitzroy belay jacket, and its cold. we keep a steady pace over the dome du gouter before a dip takes you toward the climb towards the vallot hut and the start of the bosses ridge. start of the bosses ridge

we stop to eat and billy is feeling cold, we are about 4300 metres and the altitude is kicking in. we keep going slowly upwards to the grande bosse 4513 metres. rise to the grande bose

we got over the next rise, the petite bosse 4547 metres, it was starting to get a little lighter, but no warmer, we could see the next incline to la tournette 4677 metres and the summit ridge, but billy stopped exhausted and extremely cold. he had the hot aches in his hands and felt sick with the altitude. he couldn't go on. i tried all i could to motivate him, and the sun rising and heat we would get from that could persuade him to carry on. i was resigned to going down with him, but he insisted i carry on to the summit. he assured me he just needed to get down. he headed down, while i left the rope with my walking pole to collect on descent and headed on up. i too was freezing but the sun coming up and the fact i could see the summit gave me a little kick. i was soon on the rise to la tournette 4677 metres. from here the ridge bends and narrows to a lovely arete easing just before the summit. arete to the summit

it was a joy to finally reach the summit, i was freezing, it was 7.30 am. the views were superb, but i didn't want to linger, i got a guy to take my picture. i wanted to head straight down and catch up with billy. the descent is obviously as steep as the ascent, and the drops on either side of the arete are fierce. i remember telling myself to switch on as the was a lot of people coming up and not much room for passing. descent of the bosses ridge

i got to the rope and had a quick bite to eat before packing it into my rucksack and continuing down. i soon reached the vallot hut were i had a long break, eating and getting some water from my rucksack as my platypus was frozen. 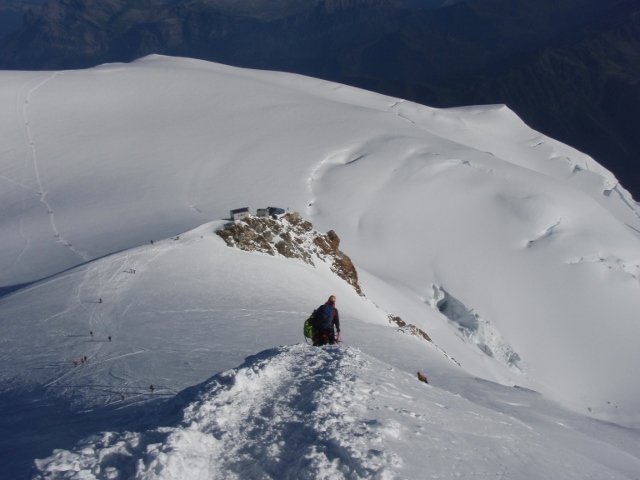 down to the vallot hut

still no sign of billy, i hoped he was ok and heading down. i noticed to my left a beautiful snow ridge, long and sharp rising to the summit of the aigulle de bionnassay. i just couldn't stop looking at it and want to come back to do it. 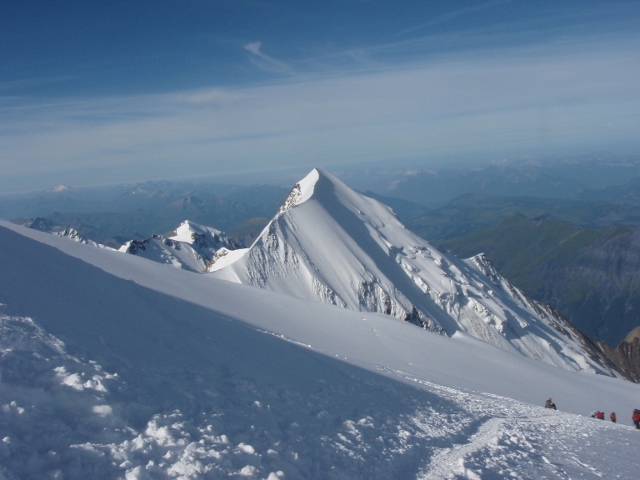 over the dome du gouter and down to the futuristic looking gouter hut perched on the mountainside. i sat at the old gouter hut for 5 minutes soaking it all up, it was 10.30 am and all i had was the down climb to the tete roussse. the down climb was eventful, lots of guides and clients dislodging rocks down the ridge, and one German with walking poles taking a slide on a snowy section. i arrived back at the bivvy just before 12, to be met by billy with a warm congratulations. all that was left was to pack up the bivvy and walk down to catch the railway, then cable car then bus back to chamonix ! i was exhausted when i arrived at the hostel, but that good exhausted when you've completed your days objective. 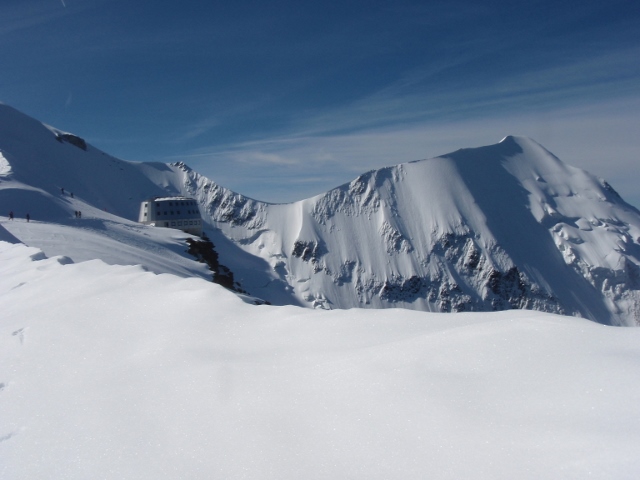 That Gouter hut looks a lot better than when I stayed in it a few years ago.

thanks mountainstar, the new hut looks superb, i wish they would let you doss in the old one, would have made for an easier day.

Some stunning pics there