A mix of sunshine and stormy showers for a very quiet, but unexpectedly tricky, bank-holiday weekend Snowdonia route.

moel hebog.gpx Open full screen  NB: Walkhighlands is not responsible for the accuracy of gpx files in users posts
There were a couple of fishermen parked at the shores of Llyn Cwmystradllyn, but I’m not sure many people have ever set off up the hills from this attractively remote hollow: the first paths north-west are unsigned and invisible on the ground, the on-map route being blocked by fences, a stream and impenetrable vegetation. Probably best to ignore the map and head in the general direction across the fields until meeting the level trackbed heading relentlessly along the 250m contour to Cwm Pennant – that, at least, is clear on the ground. This is pretty easy going, firmish underfoot even through some very boggy-looking surrounds, and – with good views to the Nantlle ridge and the coastline – a lot better than the usual alternative route below these hills through the northern forestry. I’m not actually sure how legitimate it is though – it isn’t a right-of-way and only a little is through access land: it’s obviously fairly well-trodden and furnished with some recently-built stiles, but also blocked by a couple of (navigable) barbwire fences and some deep stream crossings forded only by obviously neglected bridges. Throughout this long traverse – five miles barely setting a foot uphill – stormclouds were spilling over everything to the north and only a half-hour dousing heading into the Cwm Pennant mine-workings was probably a pretty decent result. From the forest-wall by the quarries (pretty marshy going to get there), it’s a fine ascent to Moel Lefn up a nicely-varied clear path through slate, heather, steep crags and a grassy finish. This felt a hard route to follow in descent a few years ago, and seems to have had some really good NP work done on it in the meantime. Bridge on the Cwm Pennant level 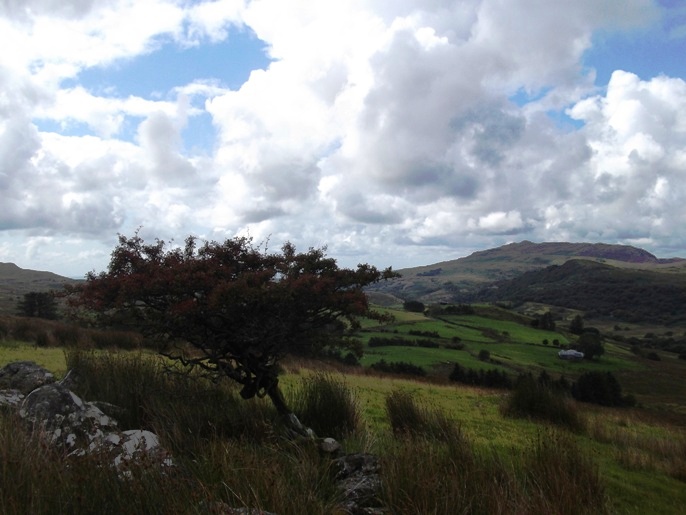 Moel Lefn and Moel yr Ogof are two really good craggy summits – beautiful views to the Snowdon range (on a better day) and the Moelwyns, and a nice rocky walk south with a couple of challenging half-scramble moments descending Moel yr Ogof, helped at least by a (new?) little bridge over the wettest patch. Moel Hebog itself, so testingly rocky climbed from Beddgelert, is just a (very steep and frustratingly convex) grassy upward slog from this side. 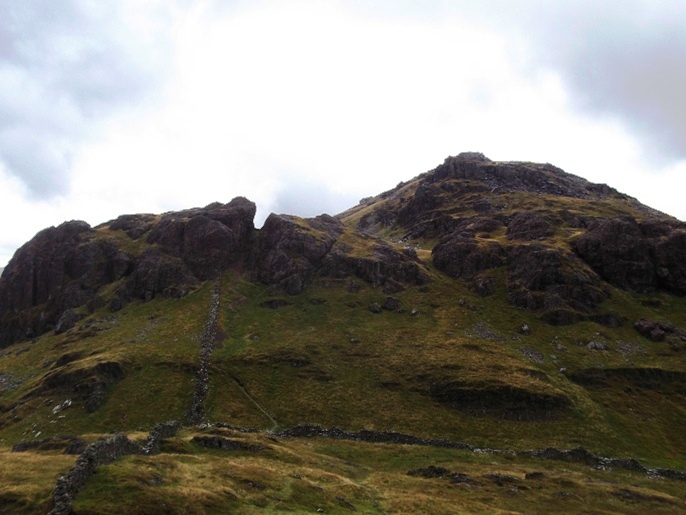 Moel yr Ogof (path runs through the notch on the left) The south ridge should be an easy way down, dryish grassy slopes at a pleasant gradient looking towards to the sea, and I wouldn’t put anyone off it. But, carelessly checking the map too infrequently, I managed to follow the wrong wall down (ref 562459, TR not L…), and ended up trying to scramble down a vertiginously steep and slippery crag, with only loose heather for handholds. The worst part was probably only about 40-50m high, but – stuck most of the way down with a vertical no-options face below and having torn away most of the ‘holds’ above – this was as stuck as I’ve ever felt on a mountain. Embarrassingly, if I’d found a phone-signal, the Mountain Rescue would have been out wasting their time on someone who couldn’t follow a map and was about 15m away from an easy grassy slope… Probably just as well I couldn’t, spent a few minutes composing myself, and found a hairy fingernails route back up. Never felt such a fool on a basically easy route… These are good mountains in a fine location, but Moel Hebog is plainly my bete noire (the only other time I’ve felt close to being cragbound, albeit that time in an icy November fog rather than the middle of summer, was on the north face of the very same hill) and I’m never going back! Great report as ever bud. I've had one or two of those moments myself.. the things we do eh!

Nice report, your photo's tell me I should spend more time in Wales.
I think most of us have had sticky moments in the mountains and we've all thought "how the hell have I got myself into this " but we do look back with a smile and think "phew, close call". Thanks for posting.

Another great report, Pops. Now the Wainwrights are done I think Wales is next and your great pics will provide a springboard. I did a similar goof up on Arran at the ripe old age of 16, contemplating whether to jump or scramble. a bum twitching learning experience never forgotten