Plynlimon.
It's a bit boring isn't it?
I mean its just a grassy slope all the way up no real features and its either raining or about to rain up there.

I had been up to the summit twice before. Once in an almighty hailstorm, the other time in a midsummer monsoon which left me fearing a drowning on the mountainside. So the opportunity to take my Buddy Phil out for a birthday walk on one of his local Hewitts proved too much of a temptation.
There was one stipulation on my part. I'd long wanted to climb the Marilyn of Drosgol. The only issue with this is that it's on completely the wrong side of the Nant y Moch meaning a circuitous route with a strong possibility of a wade through one of the many tributaries.

our_route.gpx Open full screen  NB: Walkhighlands is not responsible for the accuracy of gpx files in users posts
A route was worked out allowing for shortening or lengthening the walk and off we went. The drive down from Shropshire held little promise, the cloud sitting around the 400m contour. But on the drive up from Ponterwyd things started to brighten up a little. We parked at the far end of the reservoir by a cattle grid. looking down towards the dam the cloud was layering and swirling around Plynlimons summit. Looking good.
The first section looked solid on the map and so proved to be on the ground. Progress was quick and before long we were crossing our first stream of the day, the Nant y Baracs. No drama though, there was very little flow in the stream indeed the water level of the reservoir was probably 10m below the overflow on the dam.

We sweated up the rough slopes of Drosgol - toiling somewhat under the late summer sun but before long the summit cairn came into view, as did the vista across to Plynlimon. We stopped for a bite to eat before heading downhill on mainly pathless slopes to the ruin of the old Drosgol farm. The mind often wanders when you visit places like this. Who lived here? What happened to them? It's pretty likely that the place was abandoned when the plans of the reservoir were drawn up though it has the feel of a place deserted a long time ago. The valleys upstream of the dam were at one time fairly well populated and pretty much everywhere you see a clump of trees there's a ruin of some sort close by.

We worked our way around to the Afon Llechwedd Mawr which although we found a bridge wouldn't have caused much of an issue to cross. On the bridge we found a large scruffy nest which I was reliably advised was likely that of a red kite. The fact it was built on the deck of the bridge perhaps tells you how often this bridge sees footfall. We then climbed up the far bank to pick up a sketchy path which was little more than a sheep-track. Rounding the flank of Banc Llechwedd Mawr we were presented with one of those choices.
In front of us the direct way to our ascent route was across half a kilometer of what looked like rough grass which would lead to a river crossing. The alternative was to continue following the less than obvious path around and further upstream where there was a possibility of a bridge. The rough grass couldn't be that bad could it?
The short answer to that is yes.
It started out not too bad. But by the time we were about a quarter of the way in we had gone from nearly knee deep to nearly waist deep. This coupled with the uneven ground underneath made for pretty grim walking - arriving at the 5 meter wide river was something of a relief. Crossing was fun but we managed it with dry feet. Crossing another section of wild untamed grass we then arrived at the old track. Easy going from here then!

Well, sort of. We followed a faint and occasionally wet path up the Nant y Llyn which led us up to the dam on Llyn Rheidol. From here we then picked up a sketchy path which led up the blunt spur to Pumlumon Fach. The path improves as it climbs and there's little chance of going wrong at this stage. The climb is fairly steep in places but its only ever walking.
Emerging onto the summit plateau, We headed for lunch in the substantial wind break near to the Trig. We chatted about what a marvelous day it was turning out to be and neither of us was ready to call an end to it just yet so we elected to carry on over to Arwystli. beyond here we trended in a generally Northern direction reaching a small upland tarn.What a great spot for a wild camp this would be. The terrain out to here had been really easy going and we'd covered the four an a half kilometers from Pen Pumlumon Fawr in under an hour. The descent back into the Hengwm valley now took us over slightly rougher terrain but again, it was nothing troublesome until the stony rocky lower slopes were reached. The scenery in these quarters has an unexpected savage beauty. glaciers have sculpted some deep valleys and jagged cliffs and left behind streams with pretty waterfalls. As mentioned earlier all the farms have long been abandoned and by the condition of the 'paths' suggests that not many folk ever come this way now. A shame because it's one of those beautiful Welsh upland valleys.

We waded our way back to the Nant y Llyn before then crossing over the Hengwm and Hyddgen rivers to follow the supposed path marked on the OS map. Nope, nothing on the ground to speak of. 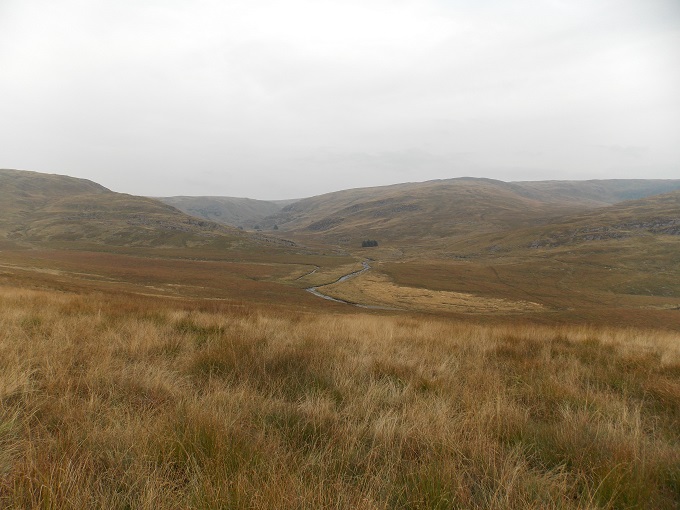 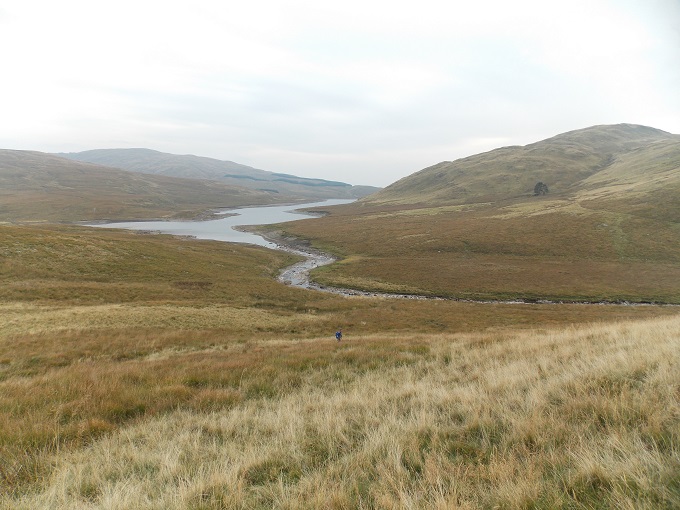 We then crossed another rough patch of tussocky grass back to the Nant y Baracs picking up the track we had originally set out on. The last 2.5km passing quickly as the sun sank lower in the sky.
Having got ourselves ready for the journey home we were about to leave when I spotted something in my mirror We sat there in Amazement as a young fox crossed the cattle grid, sniffed all around the car and trotted off down the road in front of us. 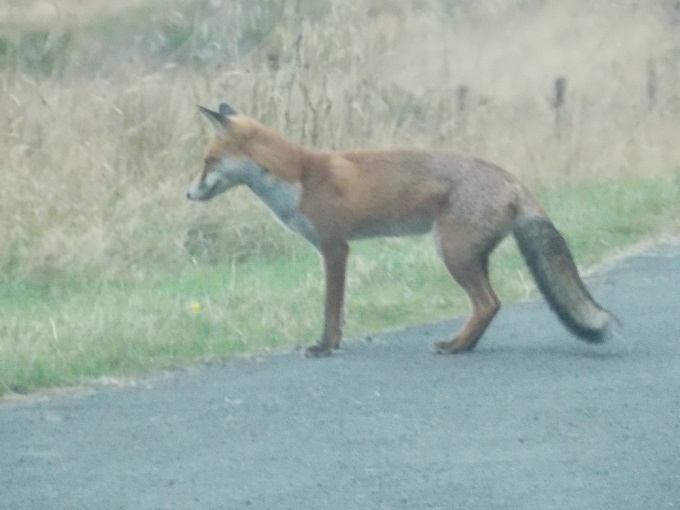 Plynlimon is so much more than a simple out and back mountain. There's so much scope for a wide variation of routes and you're unlikely to see anyone outside of a square mile of the summit itself. The wildlife is stunning, The wind turbines nowhere so close that they're particularly distracting to the eye and the opportunity to test your route finding and navigation skills is all around. Go discover. Re: Plynlimon the hard way

That's an interesting route stig and your pics capture that late summer hazy sunshine very nicely. Looks a mightily empty landscape though. I'd been wondering about whether a wild camp would be a good way of doing some of these hills from Worcester, just to split the driving up over two days as much as anything, so your tip about a possible spot is very helpful. Next year perhaps? Cheers, John.