Raven Crag and The Benn

Raven Crag and The Benn

Raven Crag and The Benn.gpx Open full screen  NB: Walkhighlands is not responsible for the accuracy of gpx files in users posts
1st January 2015, New Years Day, pouring with rain, gale force winds, feeling fat, flaccid, and suffering from cabin fever. I need to get out, but not in this weather. It's 9pm and weather still bad but the forecast for tomorrow, the 2nd, is looking better. So a starter for 6 is decided upon. Raven Crag and its neighbour, The Benn. Wanted to chuck in Great How and Castle Rock but my financial advisor wouldn't allow it, sigh!
I have read somewhere that Don Whillans the great climber of the late 50's to the 70's worked on a part of Thirlmere Reservoir to earn money to fund an expedition to Everest. After finishing work on Saturday and/or Sunday afternoons he would climb up Raven Crag just for something to do, to keep his hand in so to speak.

We set off from the wide grass verge opposite the road which leads on to the dam wall of Thirlmere Reservoir where a couple of photos of Raven Crag and The Benn were taken. 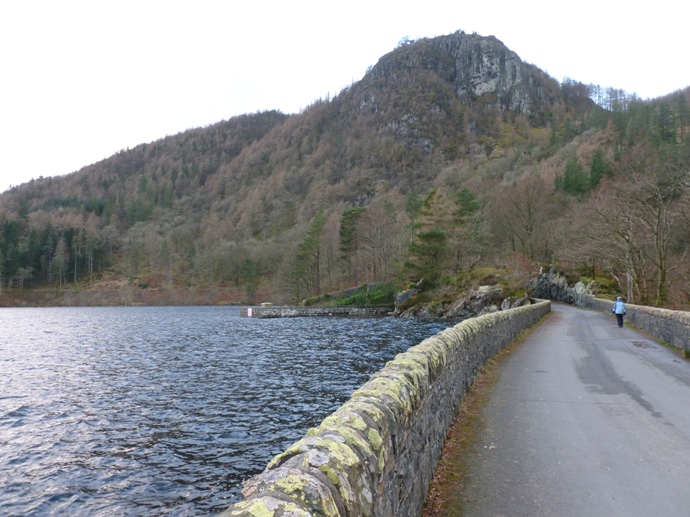 Raven Crag from the road by Great How. Raven Crag and The Benn from the road by Great How.

At the end of the dam wall we then turned right and walked for around 50 metres or so to find the footpath fingerpost pointing the way to the Ancient Iron Age hill fort - no mention of Raven Crag - and proceeded to take the steady climb up through the wood of Smaithwaite Banks.
As we progressed the path got steadily worse. Due to the heavy rain from the day before and during the night the path was now running with water and mud with not much chance of movement to either side due to the trees and fallen branches. After a short pull we came across the first section of forestry road which is not shown on the map. Straight across the road and through a gate in a deer fence and then continued up 'the gill' with the path getting a little steeper on this section.
After a short while we passed through another gate in the same deer fence and continued the trudge up through the mud, exposed tree roots, fallen branches, etc until we finally reached the col between Raven Crag and The Benn.

At this point the path turns off to the south and continues on through the trees on a path made up of short logs instead of stones. As the path begins to climb up through the trees a series of steps are encountered which makes things a bit easier than a few years ago when it was a scramble over tree roots and greasy rocks.
Looking back over the col from this point reminded me of the other two times that I had been up here. The first time was the 15th December 2006 and I had just come off High Rigg where it was raining and then when I got to this point - about 1,300ft or 390 metres - it was blowing a sleet storm, made it to the top but no photos taken. The second time was on the 22nd February 2013 when I had also been on High Rigg with a walking pal who was knocking off the Wainwrights and although the light was fading we decided to go for it. When we got to the col the whole area had been devastated by the recent high winds which had blown down dozens of large pine trees which covered the ground making it virtually impossible to reach the summit by the normal route.
I began an attempt to hurdle - sort of - the fallen trees but soon found myself bogged down in tree trunks, branches, and pine needles and as the light was fading fast had to make a return struggle back to the forestry road. But Dacre, aka Mini Rambo, being younger, fitter, stronger and, more handsome than I, somehow found a way through from somewhere on the west side and made it to the top.
Anyway, now I digress. Back to the report proper. From the steps there are a series of boardwalks which gets one over the worst of the boggy patches and leads easily to the summit cairn from where good views are to be seen in all directions but west as the trees block the view. A bit of a climb down to a small rocky platform gave nearly full length views of Thirlmere Reservoir. It was cloudy with the occasional patch of sunlight making it worth taking a picture or three. My financial advisor at the summit cairn. High Rigg in the foreground and Blencathra behind. Looking over Shoulthwaite Moss towards Clough Head and Calfhow Pike. Thirlmere through the trees.

We retraced our steps back to the col and began the walk onto The Benn which is straight ahead bearing north as you leave the Raven Crag path. A nice meander through the wood and a short climb onto the rocky summit where once again good views were to be seen including west to Castle Crag, Iron Crag, Bleaberry Fell and High Seat. It was very windy on the summit so struggled to take photos but managed a couple after parking myself on the wet ground. My intention was to continue down the far side heading more or less north as there is no path shown on the map. There is a path which I would imagine heads towards the road below Smaithwaite Banks but didn't get the chance to find out as the one with the biggest boots on wanted to return back to the col, which we did. Blencathra-Skiddaw Group-Great Calva is centre. View from The Benn summit. Raven Crag from The Benn summit.

From there we just followed the forestry road which runs down the west side beneath Sipling Crag, around the north end where it then turns northeast and eventually picks up the tarmac road. An easy walk on blacktop took us back to the car, coffee, and snack. An all round easy walk with some interest being in the hill fort. Not much to see really but with some imagination could picture it as it was 2,000 years ago.