I've had a notion to climb to the summit of Montserrat since I visited the monastery on a quick trip to Barcelona a few years ago, so when lack of time ruled out the trip to Menorca I really wanted for some late winter sunshine and walking, it seemed like a good alternative. Arriving in Barcelona it seemed to be winter coat weather for the locals and coat off weather for Scots - a nice change from early March in Edinburgh!

I wasn't sure beforehand if this would count as my biggest ever hill, if I was taking the train halfway up, but due to not being able to tell the difference between having to get the train from Barcelona at 17:32 and having to be in Monistrol de Montserrat to get the train up the hill at 17:48, I ended up walking the first half the night before anyway - first up a path from the village, then out onto the road as the light failed, and a long walk up with the smell of night, and a great orange moon appearing above the hills on the other side of the valley as I came round the bend of a zigzag. So it was mostly a nice enough walk in a way, but the last part from around the road junction seemed to go on forever, and I was footsore and hungry before I arrived.

Rested and refreshed the next morning, I pottered around the monastery area for a bit before setting off again towards the summit. The described route to the summit starts from the top of the Sant Joan funicular, but since that was also cheating, I started off along the route by Sant Miquel which swings round to come up to the upper station. This was a tourist path with a vengeance, paved and more or less wide enough to drive up, but it was a nice fairly gentle start, and the day was getting warmer. As the path headed round from the monastery and came out of the trees I got my first view of the snowy Pyrenees on the horizon. The path went on up past a fishpond, and some good views across the valley, then back round to head towards the various peaks of Montserrat, ending up slightly above the station before leading down to it. Sant Joan funicular and the peaks beyond

There was a small visitor centre, and I pottered round a bit, reading about the mountain and its wildlife and history, and then sat in the shade at the back and had a rest.

From there the path led round above one side of the main valley, passing below some of the peaks, and across the valley from others. I stopped to watch (human) climbers on one great rounded peak, and then found myself watching mountain goats running across the base of it, to great excitement from somebody's dog. 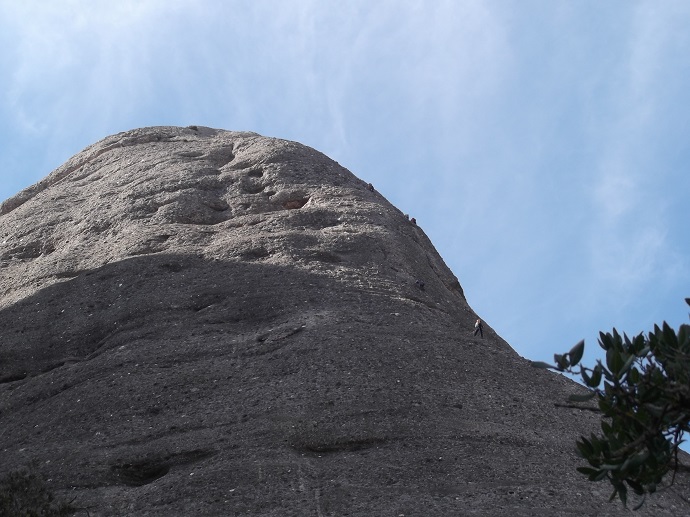 A gap let me look back down on the monastery, on the other side of the central valley and well below me. Looking down on the monastery

The path led along past more fancy peaks, and then to a view of the summit and another assortment of rocks ahead - I wasn't sure exactly where the summit was, but knew that the masts were somewhere near it. I think it's actually the less pointy triangular bit to the left. The summit and other peaks

After the junction with the way down, the path went through the woods to the hermitage of Sant Jeroni, then steeply up to the bottom of a long flight of steps to the summit - hard work after a longish walk, and I mostly went up the slope to the side of them. The summit was quite busy, but there was quite a lot of space - the main fenced area to one side, and another bit with old and new trig points and quite a lot of sloping rock below it where people were sitting (and where I found a spot to eat my lunch).

Unfortunately it was too hazy to see much of even the nearest hills, so I didn't get the famous view of Mallorca - I think it has to be really clear for that anyway. The summit was perched right at the edge of an almost endless drop to much flatter ground, but around to the left the collection of strange peaks continued after a gap. The main summit must be one of the very few possible summits that you can actually walk to. Across to the Pyrenees Retracing my steps gave me a new view of some of the rocks, including this lovely sheep-or-sphinx. A sheep or sphinx or spheep

The recommended way down split from the main way up just below the hermitage to drop down more into the valley, and was a very different kind of path - narrower and steeper and rougher and much more in the trees. It was quieter too, and generally a nice change, although the other path was definitely an easier way up. A different kind of path

The path wound in and out and up and down - although mostly down - to an open space at the Pla dels Ocells, and then to the very edge of the valley at the Santa Anna hermitage. Following the edge of the valley and more steps down brought me back in sight of the monastery. 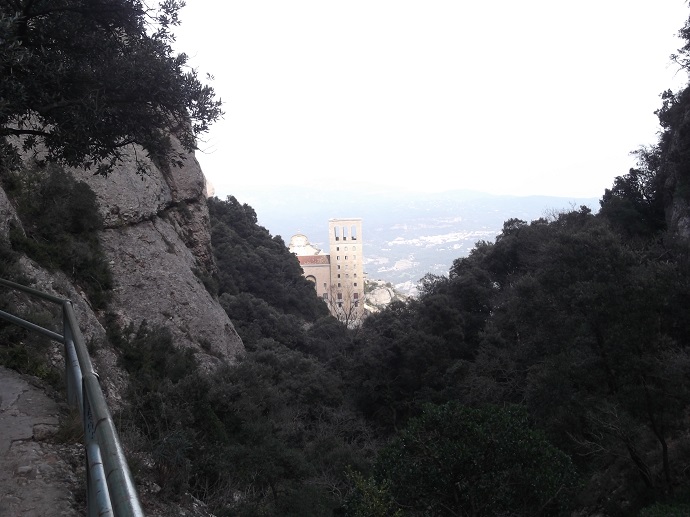 Back down at what counts as ground level - the monastery itself is above 2000ft - I went for celebratory beer and cake, and a well earned rest.

Great pics and walk! I got vertigo just looking at the summit shot looking down

Me too, a bit - there was good reason for putting a fence round the summit! It's not really like that anywhere else along the path, though.

That's certainly some drop from the top! Looks a remarkable place with al that weathered (sand?)stone.

Great to see a nice sun drenched nation making the posts, and with a hell of a good lump too. Fantastic shots of a great hike and I'm pretty sure you deserved more than a beer and a cake after that...maybe just a couple