Having spent three very enjoyable days in Edinburgh with my wife and daughter, I had planned that the final full day of my Easter week holiday would be a walk in the lakes and as I needed to get the hills south of Loweswater I decided that this would be the area to head to.


2015-04-10 Mellbreak to Burnbank.gpx Open full screen  NB: Walkhighlands is not responsible for the accuracy of gpx files in users posts

The weather was good although a little hazy, but I'll take this anytime over clag!!

Parked at Maggie's Bridge where there is a small parking area for 7/8 cars and lies about halfway between to Loweswater village and the lake of the same name. Booted and away by 10am. I headed to the village, passed the Kirkstile Inn and Kirkgate Farm along a walled lane. Reached open hillside through a small plantation and the impressive front of Mellbreak loomed large in front of me. 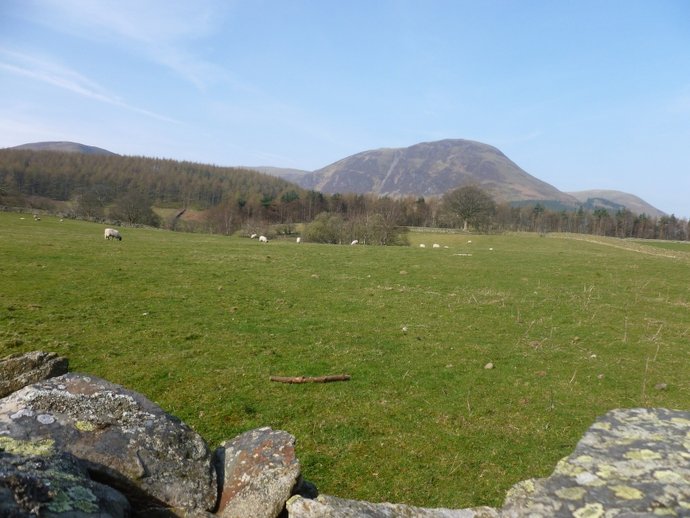 Carling Kott from near Kirkgate Farm View from above the plantation looking back to Loweswater I gradually made my up through the scree, rock and heather. It was good to feel a little bit of exposure and to do some scrambling.

There is a lovely view point about two thirds of the way up. A couple of lads passed me at this point - they being younger and fitter and me being overweight (too much indulgence in Edinburgh!! View from about half way up... I didn't spend too long at the north top but continued along the very broad back of Mellbreak to its actual summit about a kilometre further south. It had taken me about an hour and a half to reach this point. Mellbreak north top looking along to the actual summit 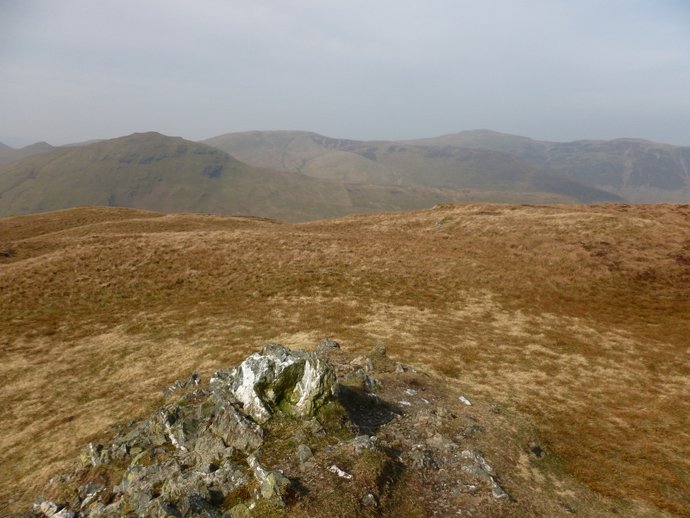 View from Mellbreak towards Hen Comb and beyond

Had a drink and sandwich before descending to the south to visit the minor top Scale Knott, a Birkett. 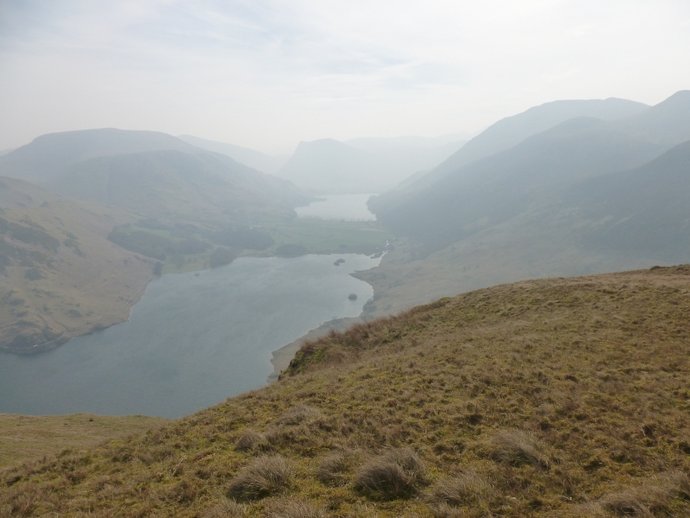 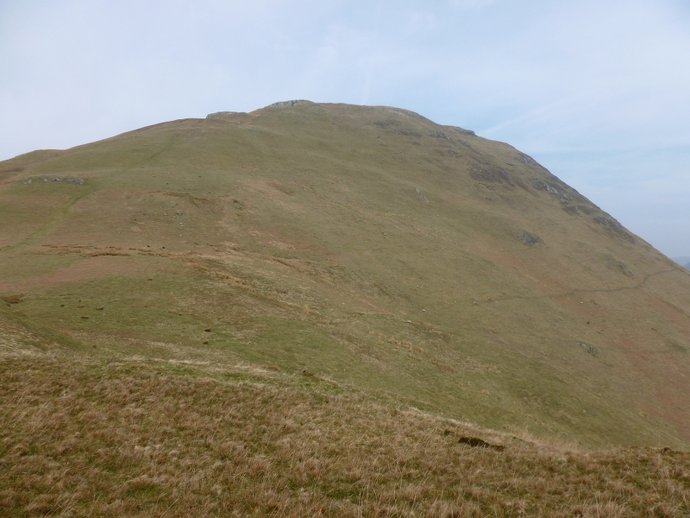 My plan was to follow the fence line from here in a westerly direction until I could then climb Hen Comb up its south flank. However, there was no obvious path so decided to follow the path around the contour of Mellbreak towards the 'Mosedale Holly Tree'. Across the valley I could now see a faint path making its way up the east side of Hen Comb so I worked my way down to Mosedale Beck and crossed it at the foot bridge where a party of 10 or so had just departed. Another gentleman with a King Charles Spaniel was just in front of me (he has descended Mellbreak down its west side and decided to go directly up Hen Comb's east side). I would me him later at the summit. 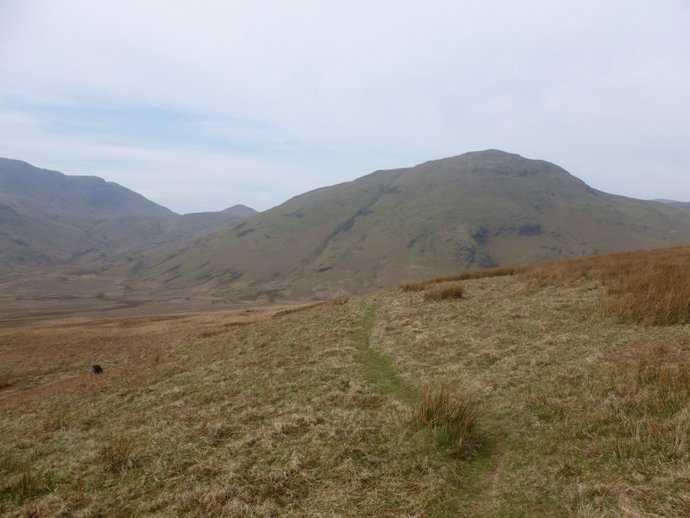 Hen Comb viewed from the path from Scale Knott

I joined the path I had seen and traversed my way along the east of Hen Comb, eventually gaining a fence and following it to the broad ridge between Hen Comb and its subsidiary top, Little Dodd. I had considered walking out to Little Dodd but decided against it. The last part of the ascent was steep and I was glad to reach the top. I met the man with his dog and we had a good chat. He is local to these fells and will complete the full round of Birketts when he does the last 5 in the next couple of weeks!! 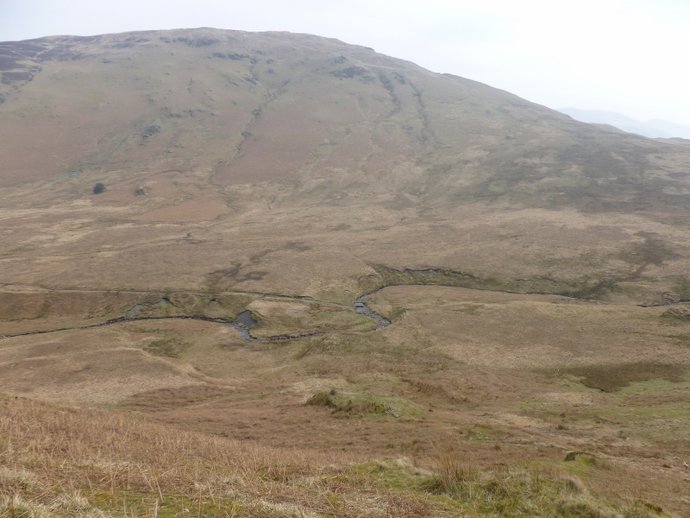 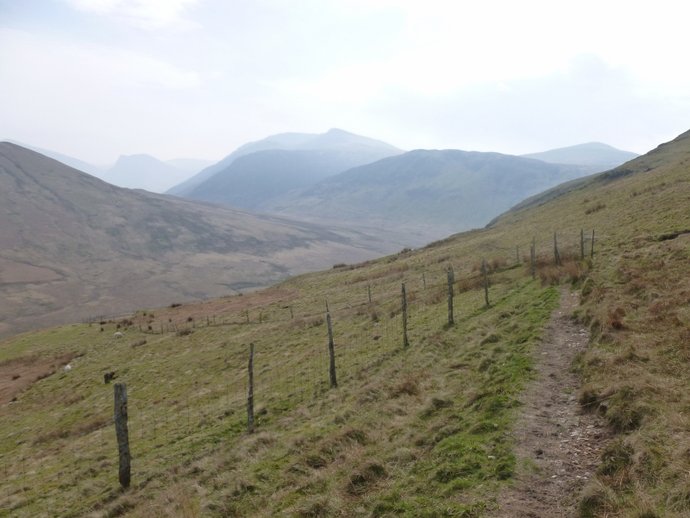 Fence on side of Hen Comb, looking south east. 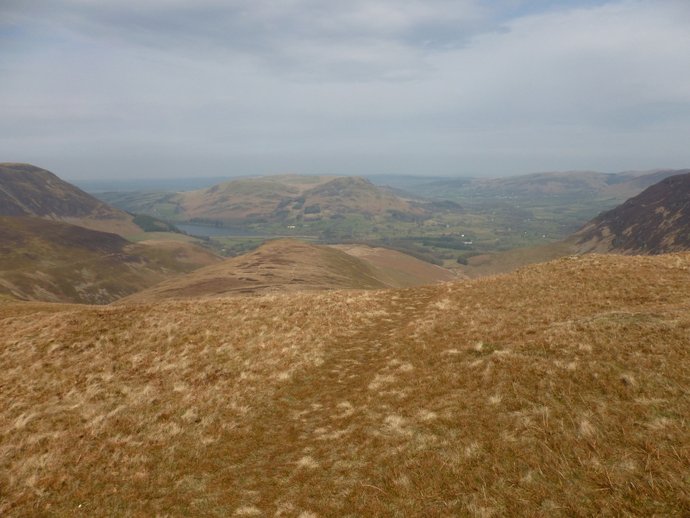 It was good to have a break. I departed to the south and this time gained another fence that I followed to cross Whiteoak Moss - a very aptly named mossy area which I believe will be wet most of the time. After about 1km the rough path turns northerly and meets with another fence that leads over White Oak and then onwards to Gavel Fell. The breeze was beginning to pick up by now, no wonder as these hills are very exposed to the west coast. 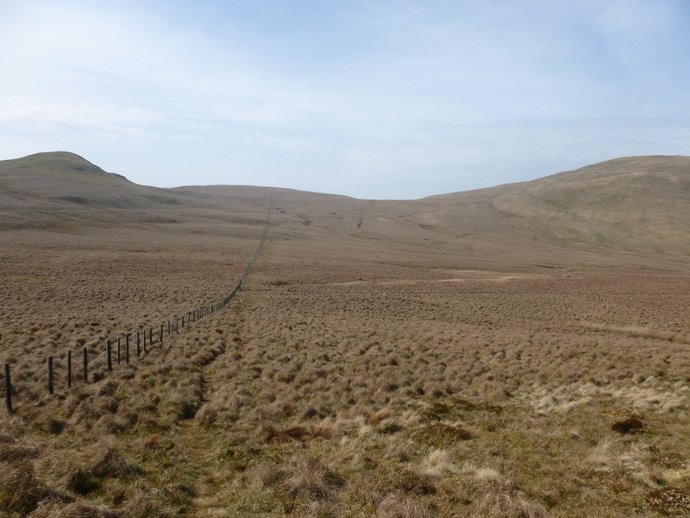 Looking back across Whiteoak Moss to Hen Comb 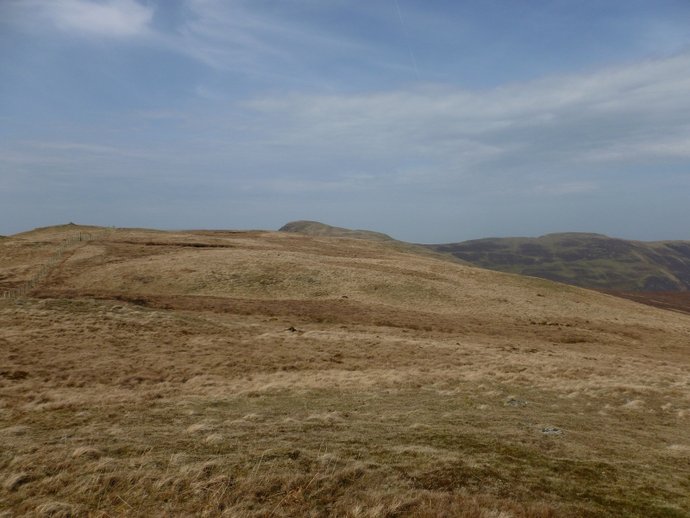 The ascent of Gavel Fell 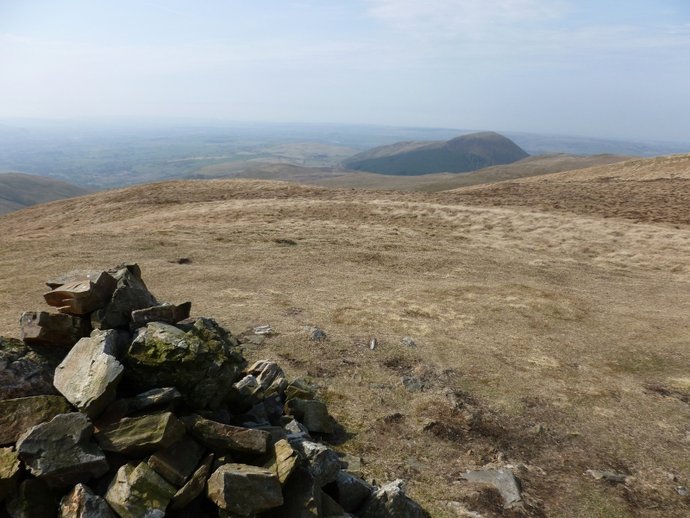 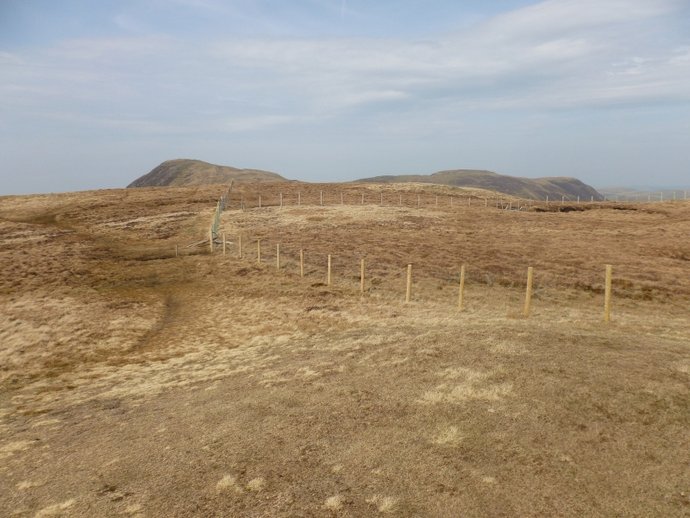 Blake Fell in the distance

I continued along towards Blake Fell which has a pleasing aspect when viewed from the south. I dropped down to Fothergill Head and then climbed up to the summit of Blake Fell on a path that was like a carpet.

There is a small, round shelter at the top. I sat in it for 15 mins to get out of the wind. Distant views were still obscured but is was good to see the local hills swathed in sunshine. 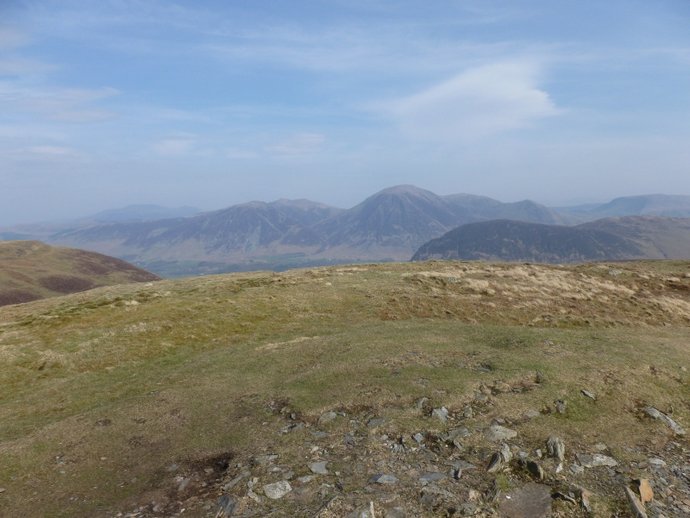 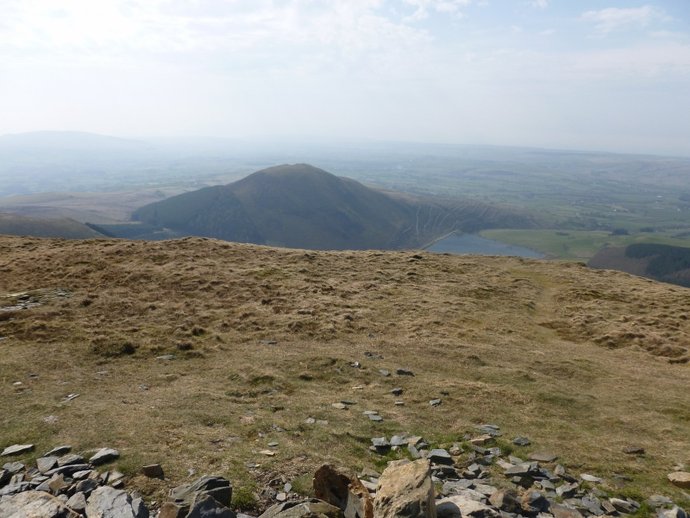 I now headed to Burnbank Fell which is very rounded and has a simple few stones next to the fence line as its summit marker. It is a fell that appears to be dominated by the superior Blake Fell and indeed the neighbouring Carling Knott. 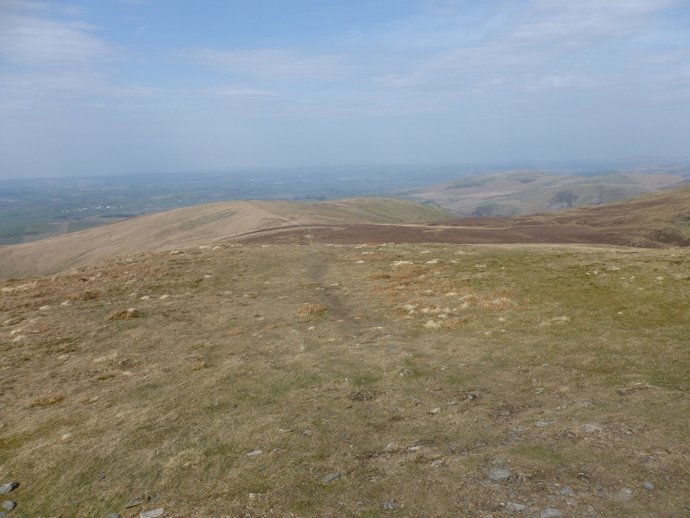 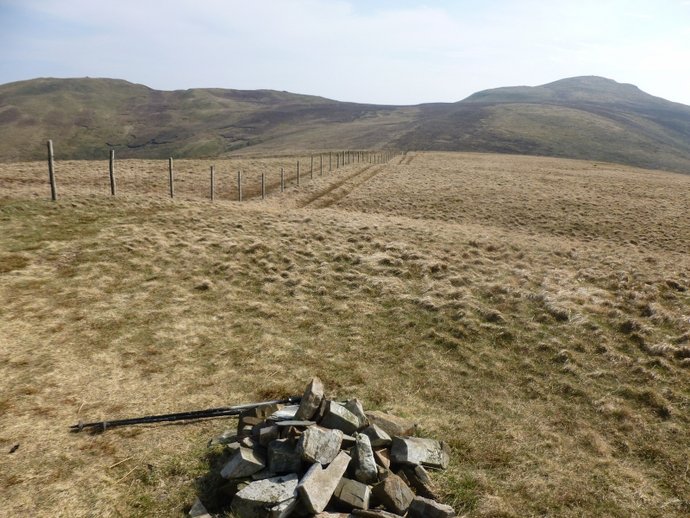 The obvious path continues north on a gradual gradient but then descends steeply in what I initially thought was the wrong direction but it does loop around to a gate at the fell wall. A very good path then leads along the edge of Holme Wood before a bridge over Holme Beck, a small incline and then a stile leads you into the wood and direct path brings you out at Watergate Farm and a very picturesque view of Loweswater. From here it a short walk along the farm track back to the car. 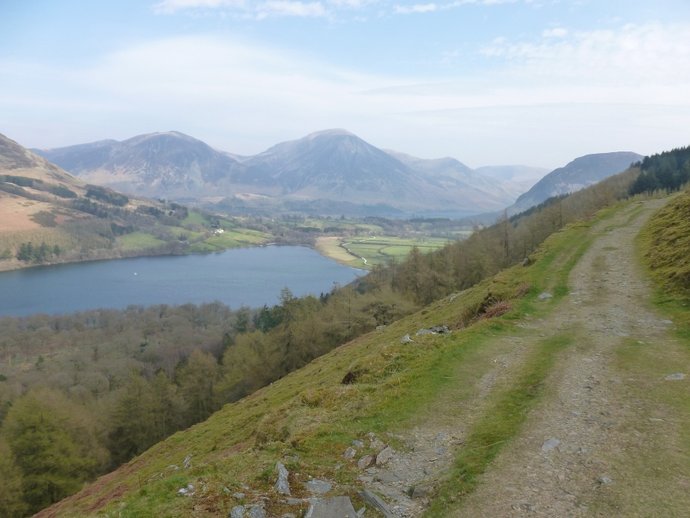 Heading along the path above Holme Wood

nice write up and pics of these five Wainwrights.

Thanks! This is almost exactly what I was planning to do and it looks lovely and not too long. Can't wait to get there (I live in Austria so bagging Wainwrights isn't so easy...)

Great round MiniRambo and some beautiful shots along the way, some of the early stuff looked like a good grunt (particularly where the young guys passed you) but at least the upside of the steep sections is a rapid ascent