In Germany, one of the most beautiful national parks is located in the Alps, at the southeast extremity of the country, at the border between Germany and Austria, at few kilometers of the city of Salzburg (hometown of Mozart): the Berchtesgaden National Park.
This national park protects the largest German glacial lake, the Königssee, with its crystalline waters and a depth of 190m, surrounded by cliffs of nearly 700m and by the Watzmann, highest mountain inside Germany (2713m; the Zügspitze, highest German mountain is shared by both Germany and Austria). View on the Königssee and the Watzmann from the Jenner (1870m). The lake is at 600m, the Watzmann summit at 2700m, the cliff on the right side is at least 700m high (twice the Eiffel Tower as reference ! The top of the cliff is at 1400m). The grasslands on the forefront are at 1200m, just before another cliff falling to the lake.

The Berchtesgaden National Park is full of hiking trails, from extremely easy to extremely difficult, and hosts several mountain huts, allowing to explore nearly all the park.

I went for the first time in this park in 2012 for fours days.
At this time, having no real experience of hiking, i stayed limited to day hikes, using extremely basic equipment. I learned quite of lot of this experience, but got frustrated to not be able to go deeper in the park. The only way to visit the deepest parts of the park was to do a multi-day hike.
During 2013, i bought additional equipment (mid-cut boots, 40L backpack, new pant) based on the past experience. I did not had any weather window during the summer 2013. However, in end September 2013, a 48h windows of decent weather was announced. I took this opportunity to do the tour of the Königssee, alone.

In the present report, I will present the tour of the Königssee, one of the most interesting multi-days hikes in this national park, doing 3/4 of the lake tour by the plateaux that surround it, following this road (with the exception of the section between the huts 2 & 3, where I followed the path through the Grünsee):

Day 0
The hike starts from the lake (603m), and requires to reach the summit of the Jenner (1874m).
Even if it is possible to do it by foot, honestly it has no real interest, especially as the summit is accessible by a telecabin (going up to 1800m).
From the summit of the Jenner, the first hut, the Carl-von-Stahl-Haus, is only at 40 minutes (~2km), and is located 5 meters behind the border, on the Austrian side (another hut, the Schneibsteinhaus, is located at 250m of the border, in German territory !). The Carl-von-Stahl-Haus (1736m). The sign indicates the border Germany - Austria.

The first part follows the Weg 416, along a large crest, up to the summit of the Schneibstein (2276m). The border between Germany and Austria follow the crest, so it was unclear in which country I was. A view backward allows to see the path followed on day 0, with the Jenner on the left, and the Carl-von-Stahl-Haus on the right (in the sunny part): The summit of the Schneibstein, also separating Germany and Austria: From the summit, the path goes southward along the Weg 454. The area is inhabited by ibex. The border in in the middle of the picture, meaning that the ibex is in Austria, when the hikers are in Germany ! Only 30 000 ibex remain in the Alps (220 in Germany !). They almost went extinct during the 19° century but were protected by the king Victor-Emmanuel II of Savoy who created a protected area in the Gran Paradiso massif.

From the Windscharte (2210m), the path then starts to follow a valley that will lead us to the Königssee. On this picture, the second interest point becomes visible to the hikers: the Seeleinsee (1809m), a beautiful small mountain lake. The Seeleinsee has an amazing blue-green coloration, and is often the place of predilection for the hikers lunch along this way, being at mid distance between the different huts of the east side of the national park. Me in the front of the Seeleinsee At the Hochgschirr pass, first view on the second part of the hike, and on the Königssee, in the clouds.

This valley after the Hochgschirr was quite step, and is inhabited by marmots and chamois (spotted by hikers 20 minutes after me). The lower part of this small valley is at the transition between the alpine and subalpine zones (with the apparition of trees, including broad-leaved trees). The final part for the day is done in the forest, and presently in the cloud layer, without any visibility ... Wow, spectacualr, that shot of the summit of the Schneibstein is beautiful.....are we going to see more

For the shot of the summit of the Schneibstein, I was lucky to be over the clouds

By the way, I'm considering to redo this hike next month with a friend.

Wow, that is beautiful. Looks like I have another place on my list to head to now.

I arrived the evening before in the Wasseralm (1423 m). This mountain hut is one of the most remote within the park, as the only way to reach it are by foot or by helicopter (most of the other huts can be reached by 4-wheel drive cars), and is composed of two buildings.
It's name is coming from the small meadow it is localed, situated at the junction of several small streams, that will form later the Röthbachfall, the highest waterfall of Germany (470 m !). By consequence it is a place where the wildlife of the park (deers especially) comes to water.
By night, we clearly hear the dears bellowing, quite impressive, and nicer that the snoring of the neighbor. Main view on the Wasseralm The Wasseralm in its meadow, and the small streams.

We leave the Wasseralm to take the Way 416, a forest trail. The Way 416 is clearly different from what we saw the day before. On the ground, lot of footprints suggest that deers are also using paths made by humans. 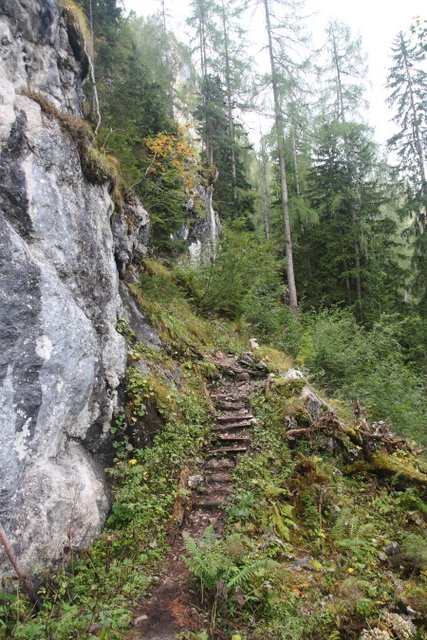 At a certain point we reach first the Schwarzsee (black lake), looking green for me ... This is the stop for the night after only 4h30 of walk for this. However, more experienced hikers might reach the Ingolstädter Haus (2120m, managed by the DAV section of the hometown of Audi), visible from the Kärlingerhaus, but located in Austria at 2h30 of the Kärlingerhaus. Especially as the Ingolstädter Haus is at the edge of the Steinernes Meer, an impressive rocky plateau.
More infos on the Steinernes Meer There are also few hikes of 2-3 hours starting for the Kärlinger Haus.

To continue for the last day ...

Great stuff. Awaiting the next installment..