froswickillbellsallows.gpx Open full screen  NB: Walkhighlands is not responsible for the accuracy of gpx files in users posts

About two weeks before this walk, Pam had texted me, saying she fancied a visit to the Far Eastern Fells of Lakeland. She asked if there was a route I could recommend, and if I'd like to come. I answered, "Yes and yes". Froswick was on my 'direct ascents to do' list. Neither Pam nor Trudie nor Emily had been on the Ill Bell range before, so this would also be a great introduction to a fine ridge for them. Pam drove us all up from West Yorkshire on Saturday morning, and parked in a lay-by near (the southern) Troutbeck. We set off walking, and before long we were on Ing Lane. 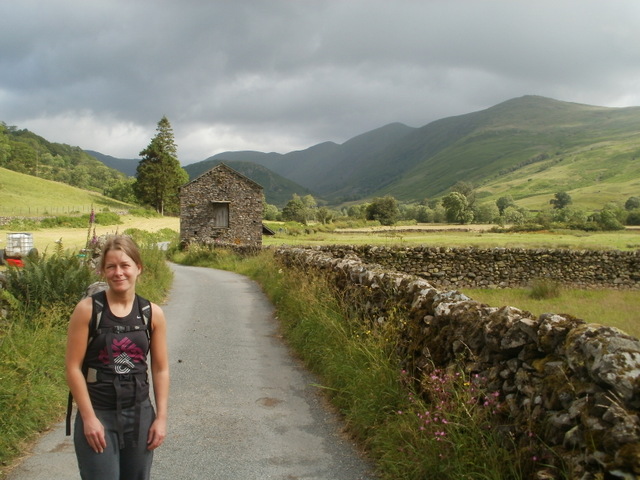 Emily on Ing Lane, the Ill Bell range on the right.

Then we moved to pass Troutbeck Tongue on the eastern side. The path towards Scot Rake began climbing on easy gradients. 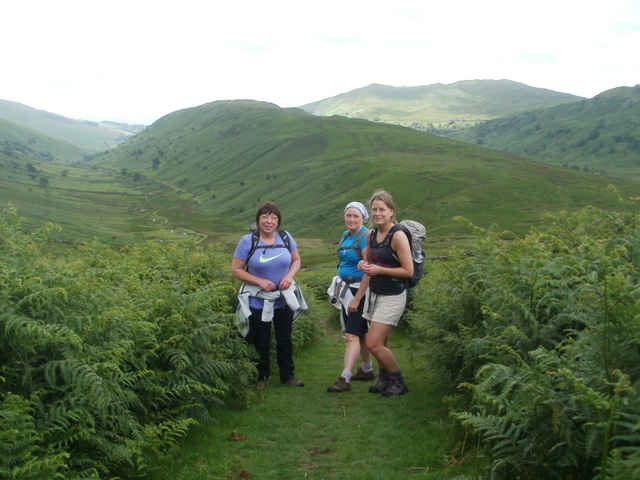 Ascending towards Scot Rake, looking back to Hagg Gill, Troutbeck Tongue and Wansfell

Although the path wasn't steep, Trudie was starting to move slowly, and we had to wait for her to catch up. Hagg Gill, Troutbeck Tongue and Windermere from near Scot Rake

At a cairn indicating the junction for Froswick from the High Street path, Emily, Pam and I again had to wait for Trudie. She was having trouble with her knee, which was swelling up. We had a short rest, Trudie rubbed some pain reliever into her knee, and Emily gave her some ibuprofen tablets. Then we moved on again, and reached the ridge. It was quite windy, but not too bad. Ready to move onto Froswick

Pam and Emily went on ahead towards Froswick. Trudie and I followed more slowly, so I could watch to see that she was OK. She seemed to struggle a little, but we made it to the summit. I suggested that Pam and Emily shouldn't miss out on Ill Bell and the rest of the ridge, but offered to walk back down to Troutbeck with Trudie if need be; I'd done the other hills more than once before. After a rest, Trudie decided to carry on. This time Pam hung back with Trudie, as Emily and I went on ahead to Ill Bell. On arrival at the summit, I wandered east a little to look down the NE ridge, a route by which I'd ascended the year before in mist. Trudie had managed to reach the summit, and was starting to feel a bit better. I rejoined the ladies at the cairn. On Ill Bell, Windermere in the background

The view to the west showed that we'd come to the right part of the district to get views on this day. Next we headed for Yoke. The day's third summit was reached... ...and then we moved on to Garburn Pass. The basic plan from here had been to take the Garburn Road back down to Troutbeck. But Pam, Emily and Trudie had not been on Sallows or Sour Hows before, so I asked if they'd like to bag them. Wainwright once described the addition of these hills to an Ill Bell round as a time consuming detour, but since then these two fells have become more walker friendly. So we chose to climb them. It didn't take long to get to Sallows. 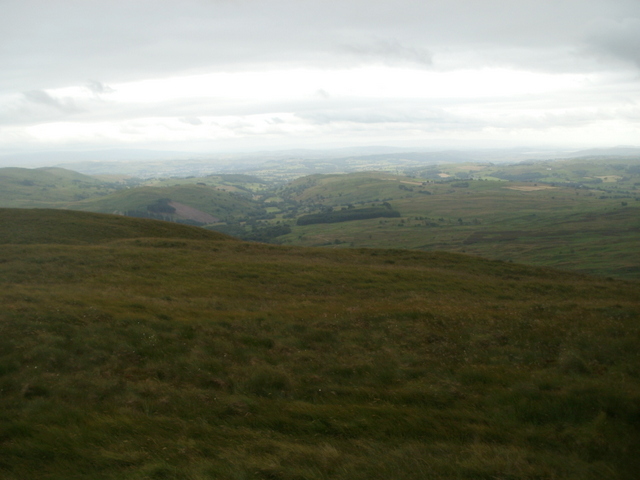 The view SE from Sallows Then we moved round onto Sour Hows. Adding these last two hills was a pleasant little detour which didn't need too much time. Cloud was now lowering onto Ill Bell, as we looked back. Then we started the descent by the east ridge back towards Troutbeck. As we came to the last stages of the walk and looked north, we could see the ridge we'd been on was again clear. Caudale Moor, Thornthwaite Crag and the Ill Bell range from the path above Limefitt House

We all agreed it had been a really nice walk. The weather had caused no problems or discomfort - some wind but not too much, little rain, and where we were, high cloud with some sunny breaks. Pam drove us back south, and after a stop at Lancaster Services, it was back home to Yorkshire.

Good route that simon, did a similar one earlier this year. Shame about the weather, especially in July!!!

mamoset wrote:Good route that simon, did a similar one earlier this year. Shame about the weather, especially in July!!!

Thanks, mamoset. It is a nice route, and although repeating myself somewhat, it is worth including Sallows and Sour Hows nowadays, despite what AW may have written in the past. The weather was actually pleasant enough despite the clouds in the photos. Just the views of the higher summits in the Southern and Western Fells were missing.