Burren Cycle.gpx Open full screen  NB: Walkhighlands is not responsible for the accuracy of gpx files in users posts
WH OS only covers UK, but you will be able to import the route into google earth

Well I have become a migrant

Currently hanging out in Co. Clare Ireland, which is great in many ways although I do miss the highlands of Scotland

Decided I needed to get out more and managed to track down a cycle route around the Burren, excuse the pun.
Typed the coordinates of the parking into google maps on the android and set off for what I though would be a couple of hours at most mini adventure

If you have been tuning in then I'm sure you will have been hearing reports of flooding, not just in the UK, but very much on the west coast of Ireland as well. As with all flooding events a few kilometres, even a few metres either way makes a huge difference. Indeed where I am currently staying you'd be hard pushed to believe some of the reports on the news.

Anyway I turned right and approached the parking area to be confronted by an abandoned 4x4 and a very big puddle in the road ! I got out of the car and took a look, looked pretty deep to me, so I got back in the car and decided to reverse back along the single track tarmac road and park at the other areas where I'd turned at the junction. A landrover approached from the other side and I watched as the bow wave it made reached half way up the headlamps

Glad I'd made a tactical retreat 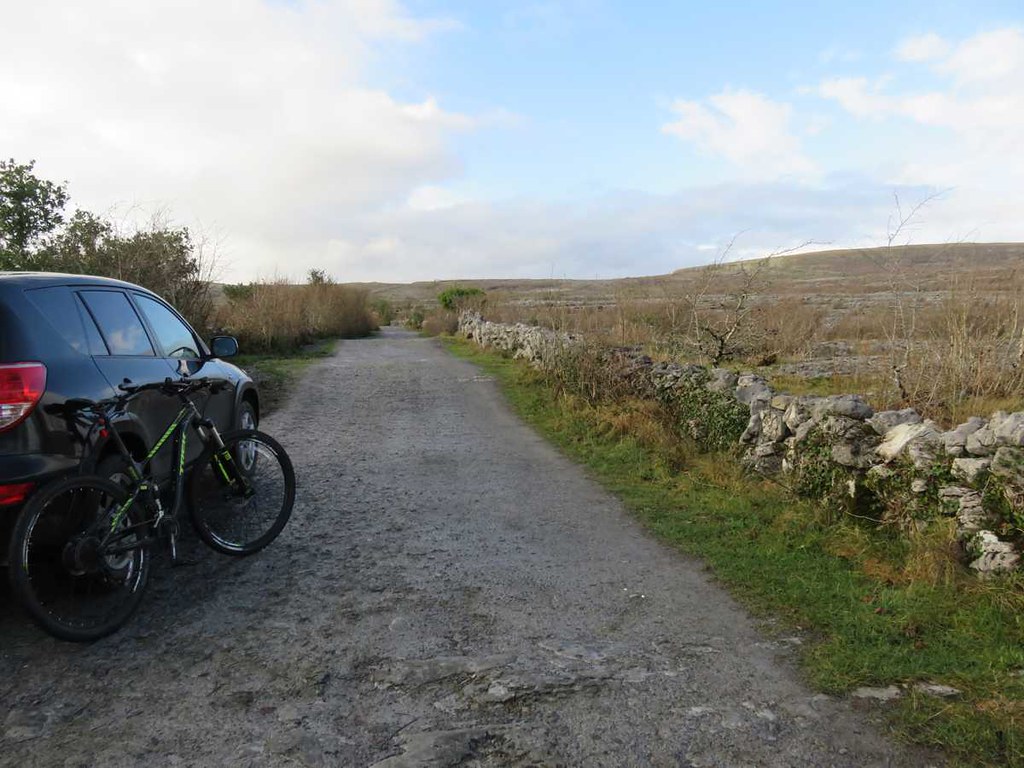 I set off with a smile on my face looking forward to the exercise and fresh air.
Met a couple at the next junction, right to go up to Slievenaglasha and Cappaghkennedy and straight on to follow the route I'd downloaded.
The look of concern and non committal attitude of the lady didn't register with me at the time as I told them of my intended route and enquiry as to the risk of flooding on the way; "yes theres usually some flooding on the road after rain at this time of year".
So off I set, cycling up the gentle incline past the loudly bellowing bull in the field, I ddin't want to stop and take any photos, perhaps its ferocity was warning me of what I was heading for

Got to the top the section and a gentle roll down to a farmstead, Ireland is the land of small farms ! 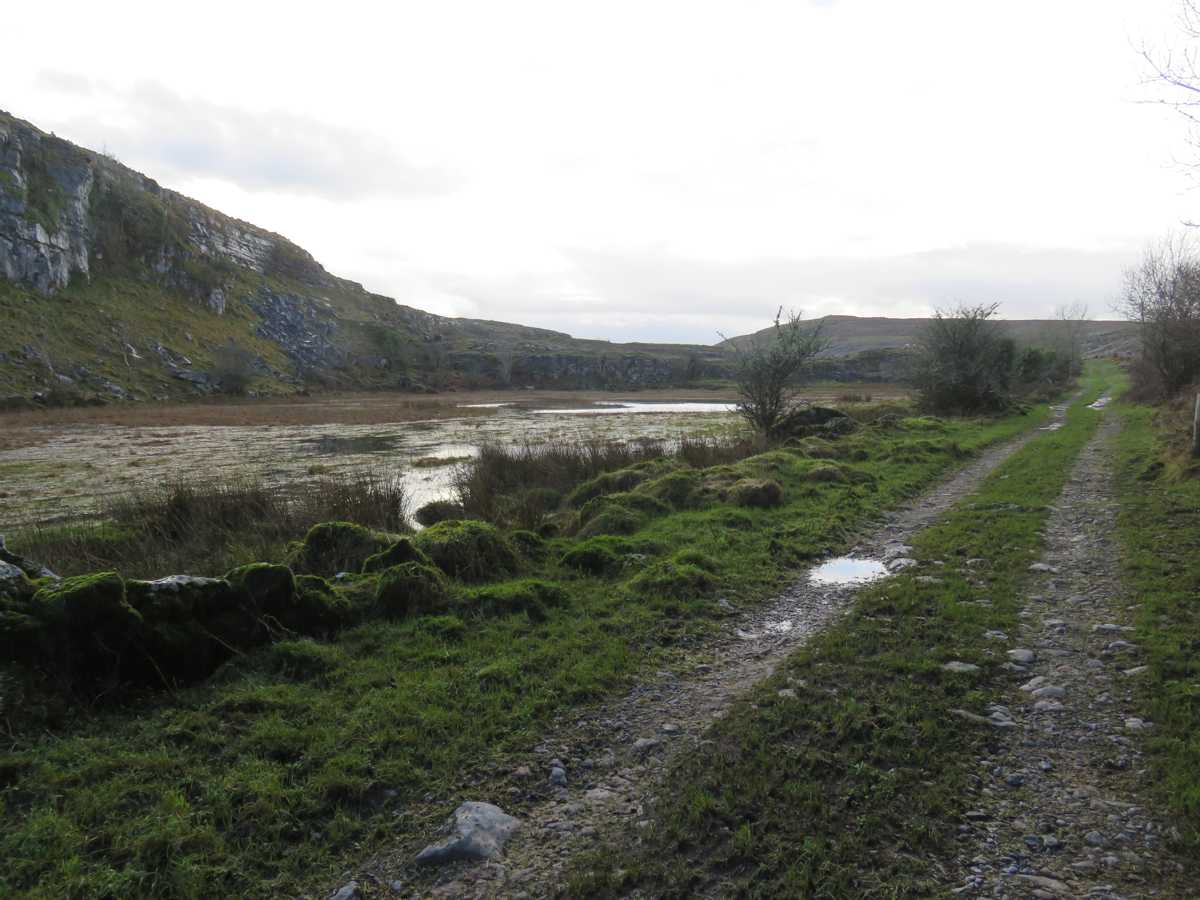 The Burren has been losing it's identity over the last decade or so and farmers are now being encouraged to go back to traditional farming methods and leave their cattle to graze on the rocky slopes, keeping down the vegetation and giving the Burren it's distinctive appearance 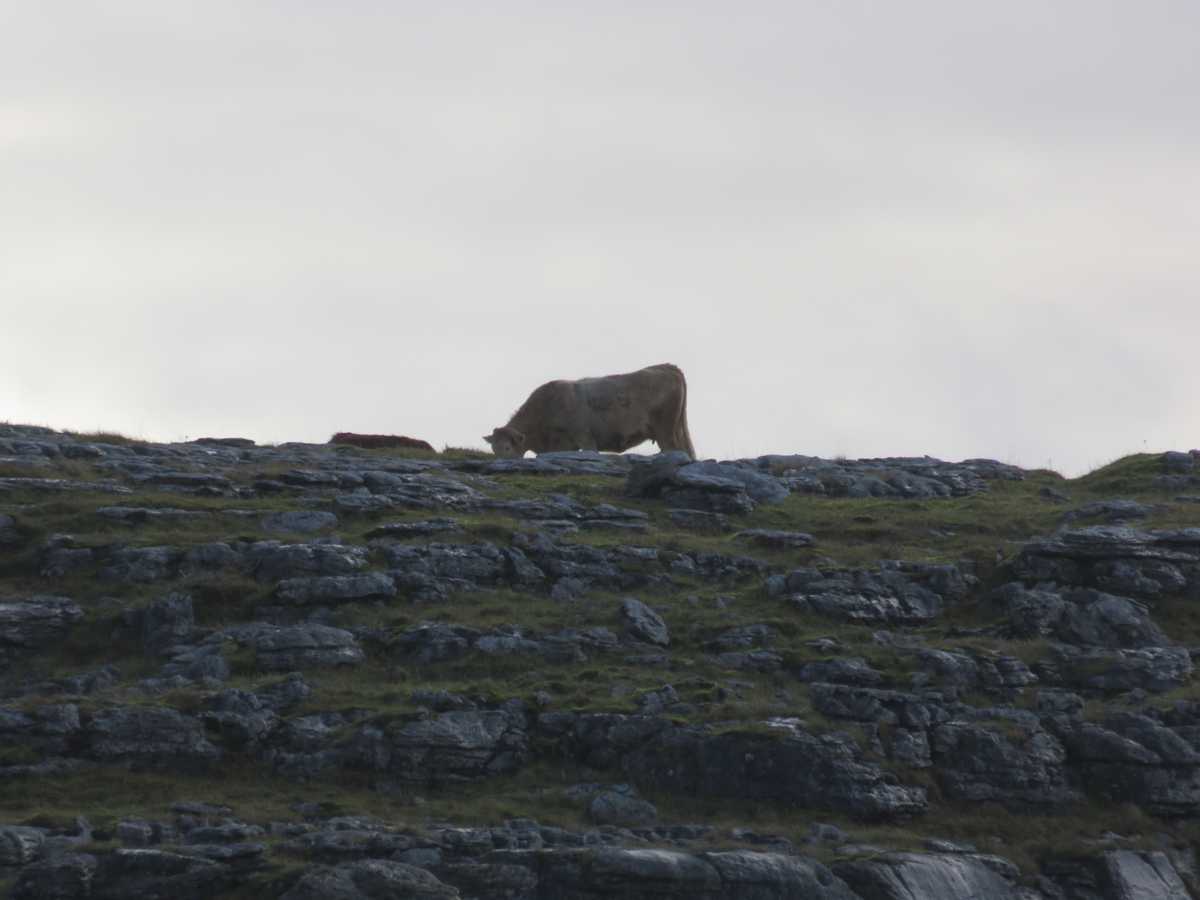 Got to the main road, a quiet rural road and turned right and shortly after saw a sign for an ancient hill fort, settlement of an old king of Clare, Cahercommaun and so must check this out. 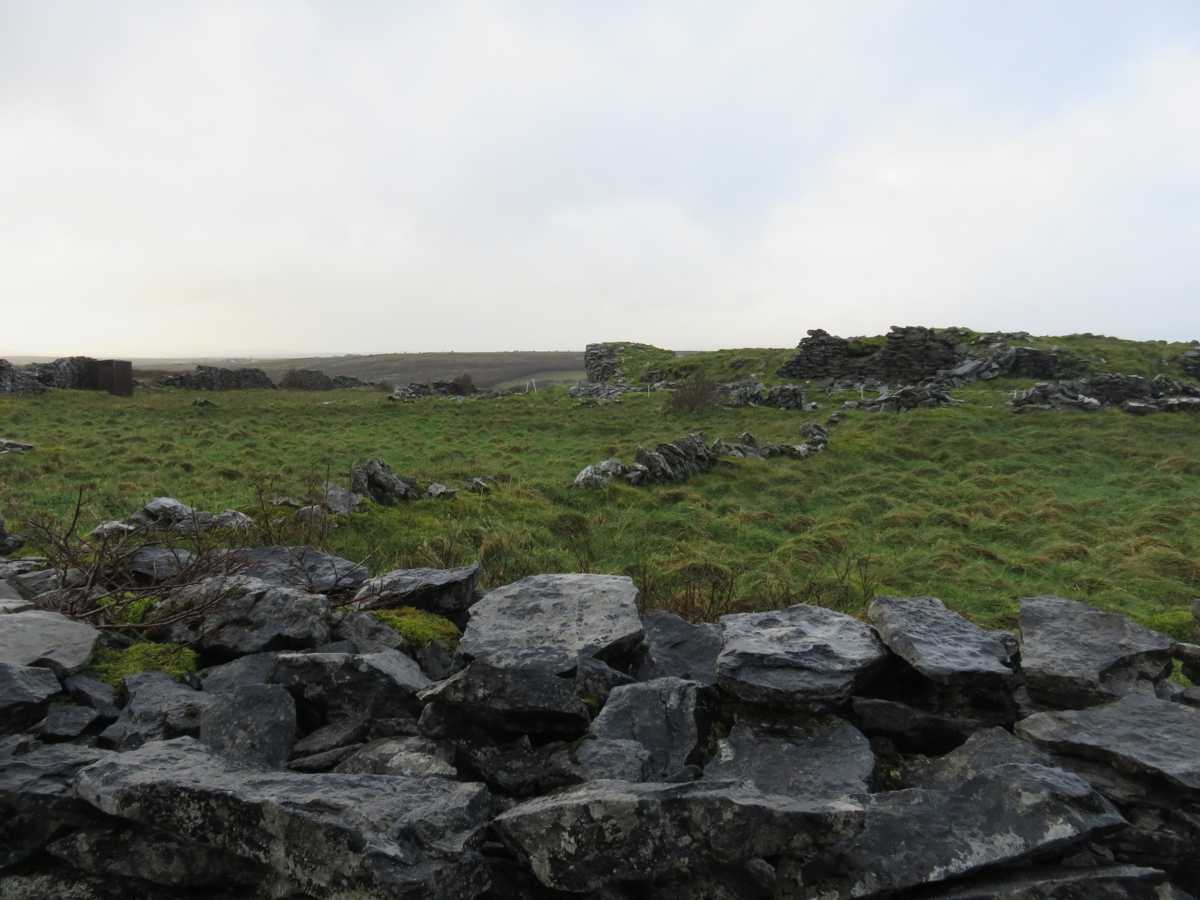 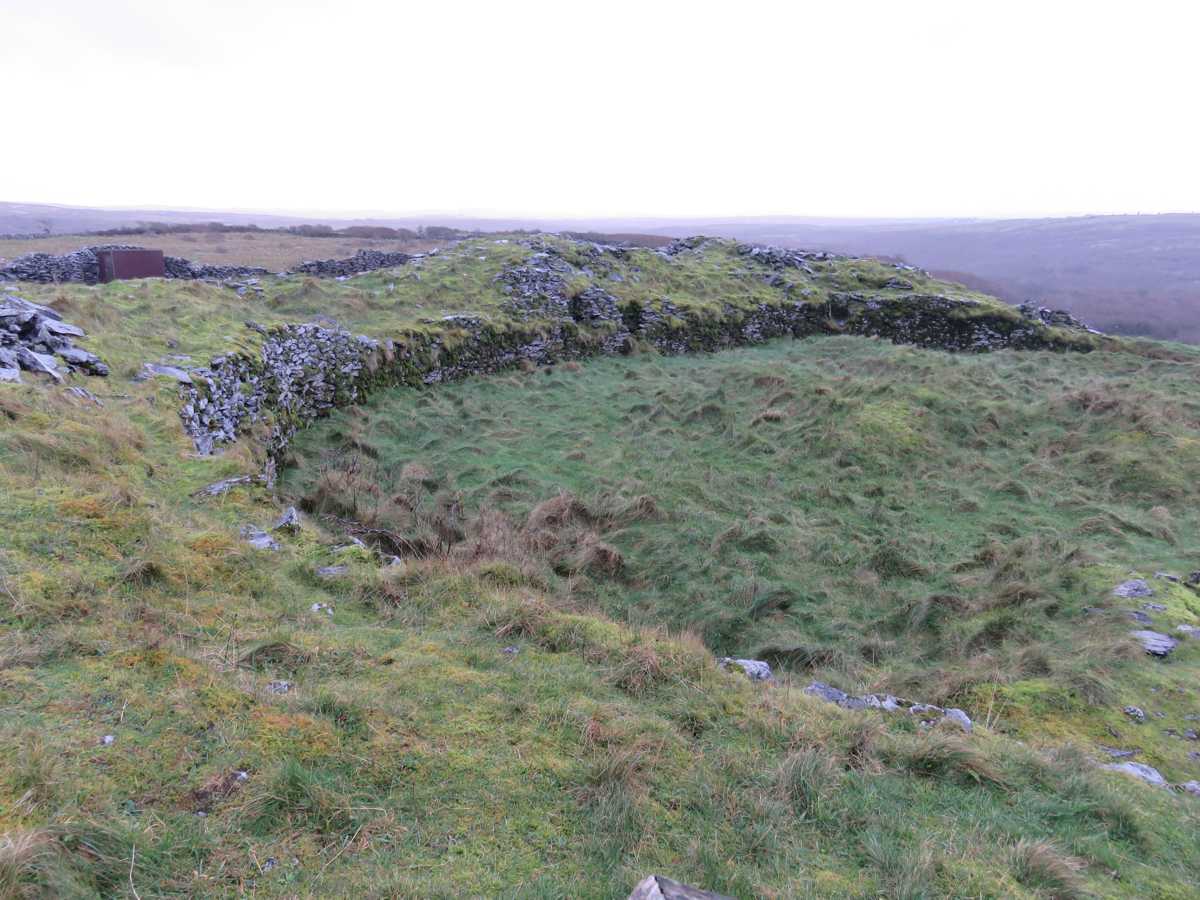 if you download the GPX to google earth you can clearly see the way the fort is situated on the edge of the cliff.
A few goats hanging around waiting for the king's return 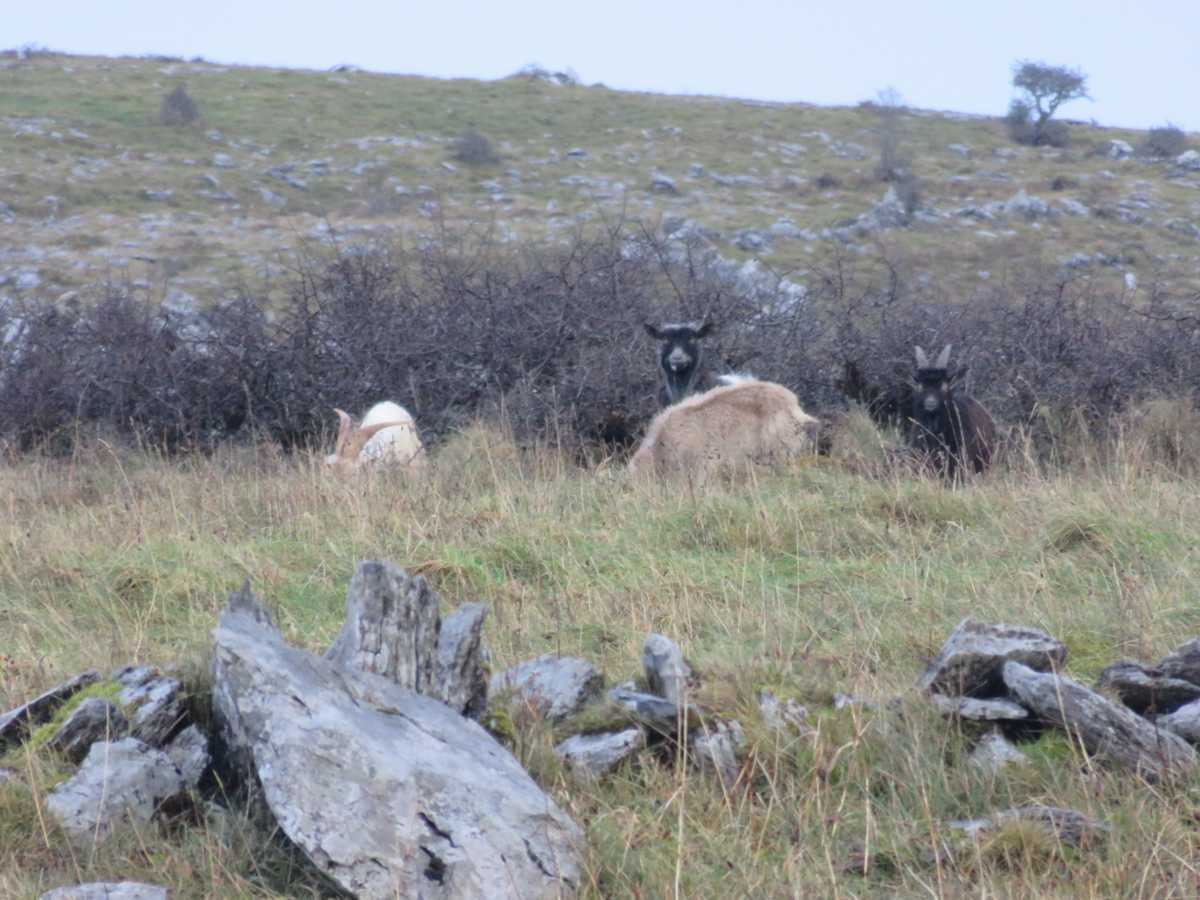 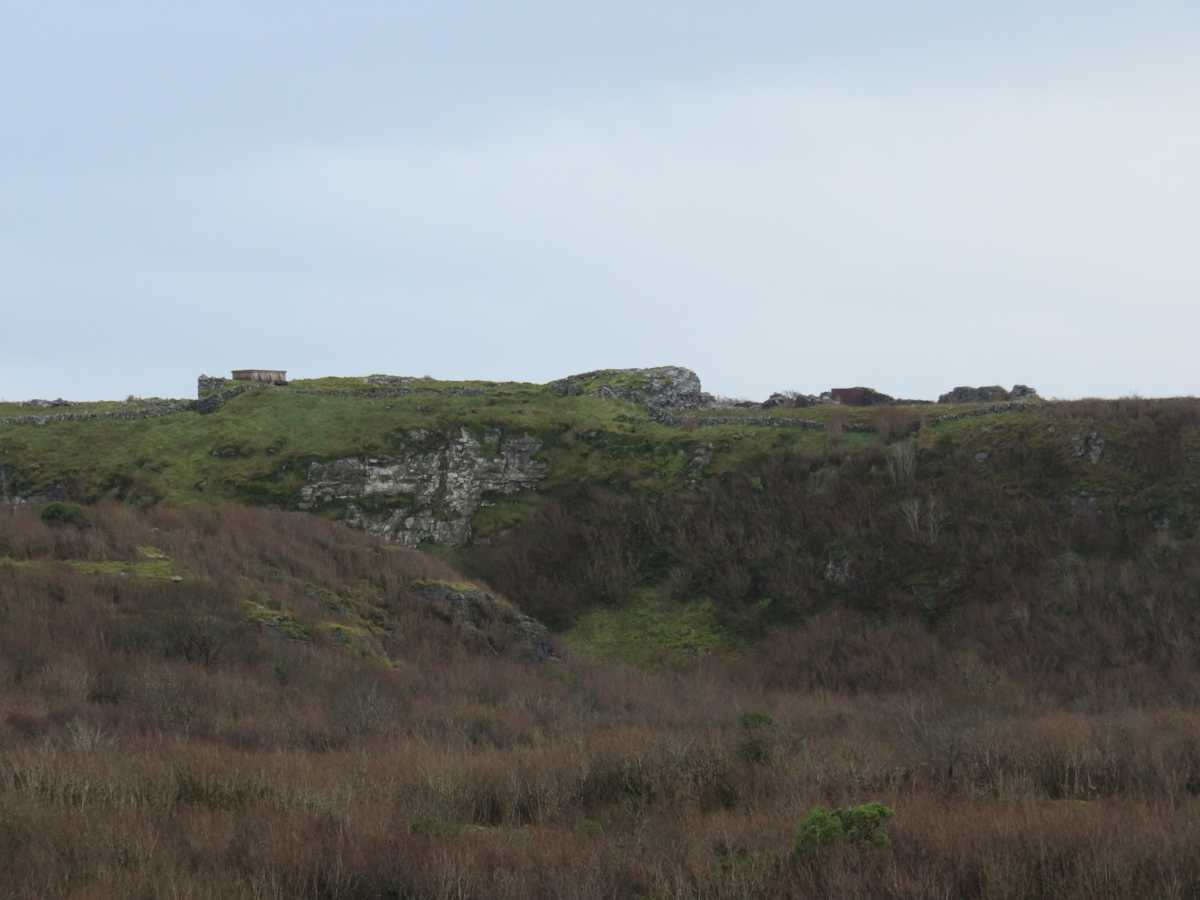 Another long decent and the first evidence of the Turloughs, you won't see this expanse of water if you check out my route on google earth 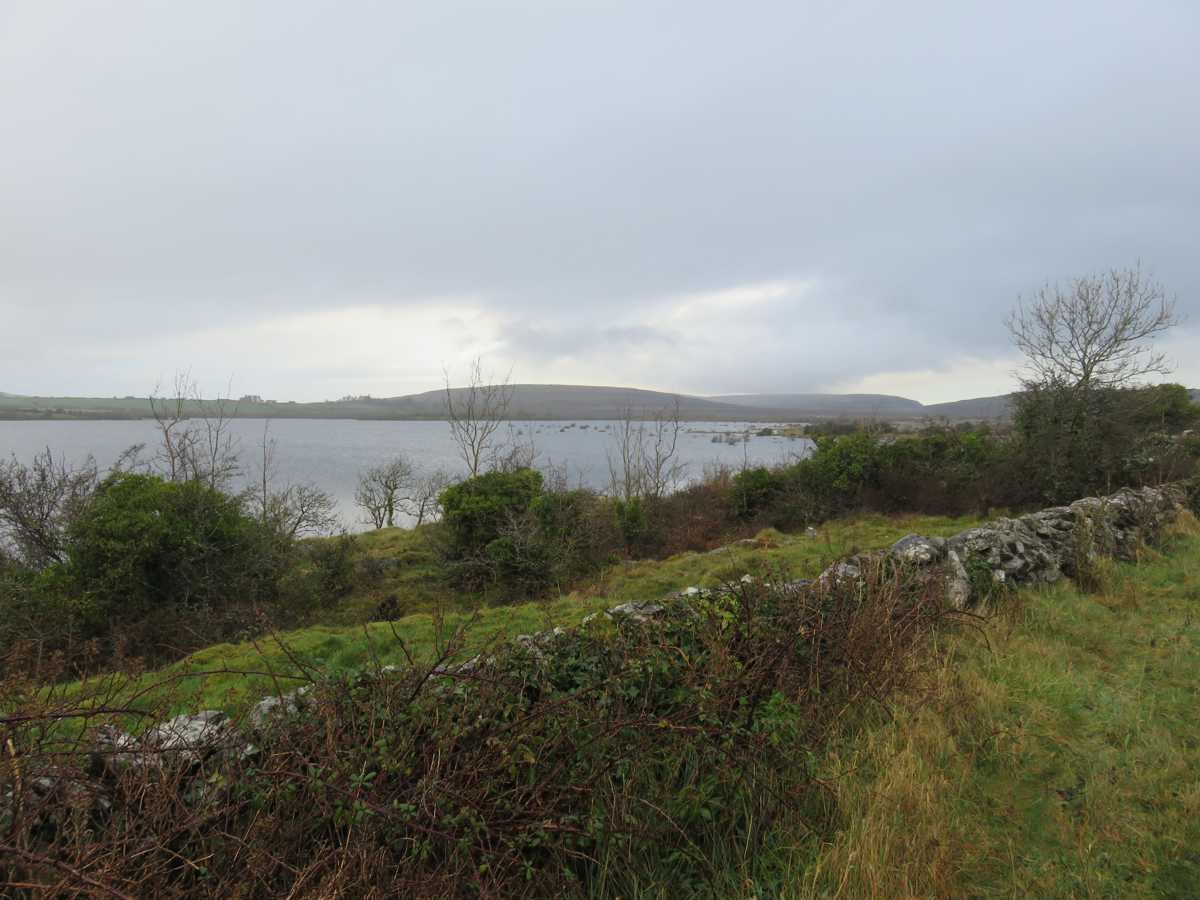 Though if you look closely you will see some darker green areas.

Anyway no issue for me on my easy to ride on very quite tarmac rural road, cruising along so easily

The area, in fact Co. Clare in general from what I have seen is criss crossed with these amazing dry stone walls with various recognised designs 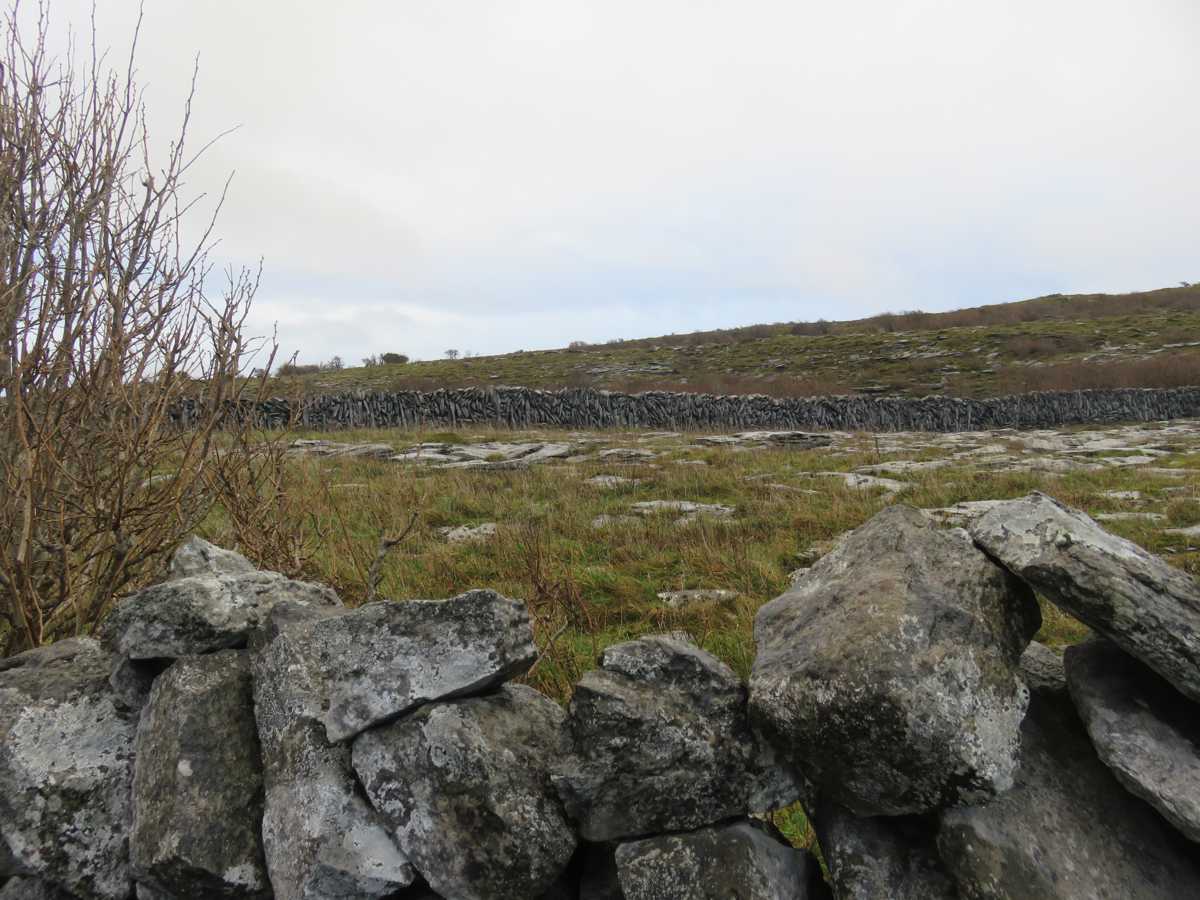 One of the walls snaking westward, the Atlantic is just over those hills 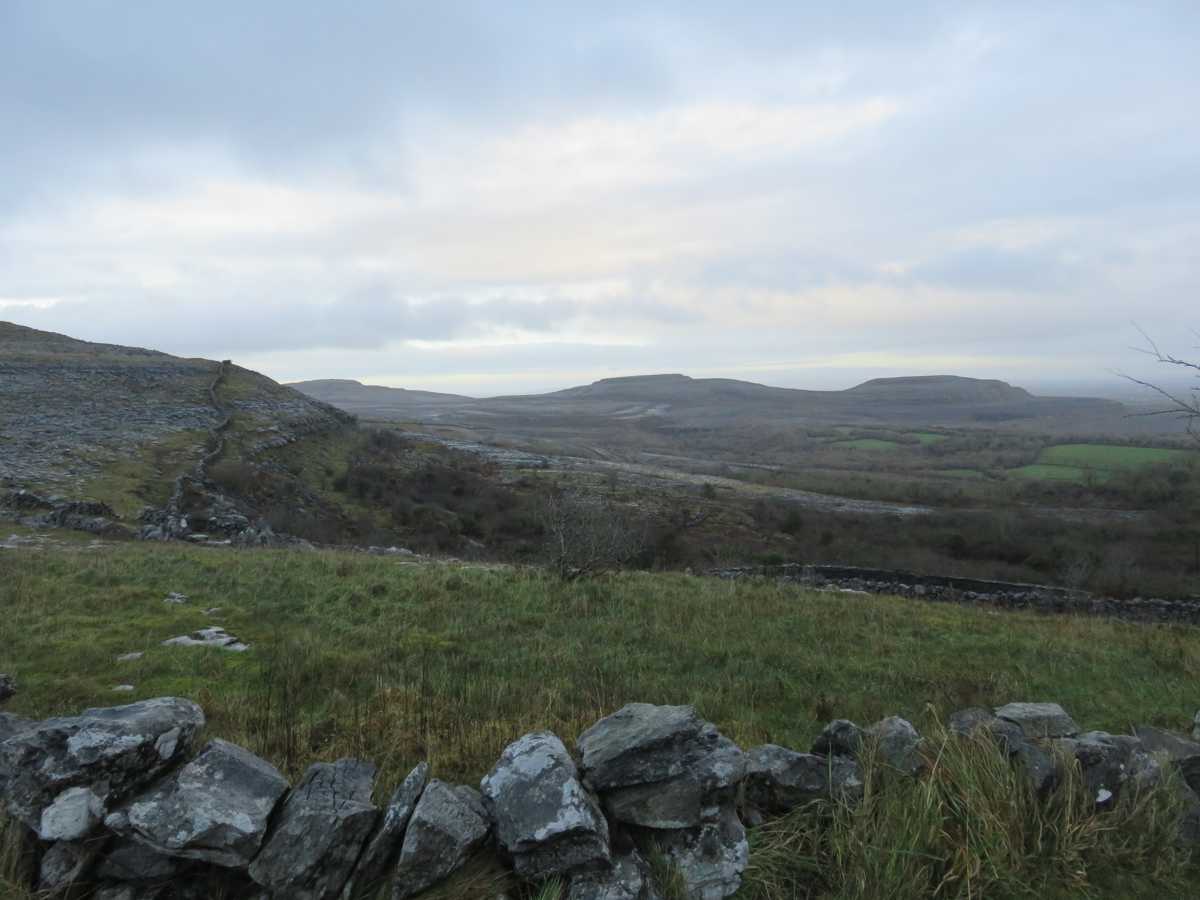 Past an old ruined church 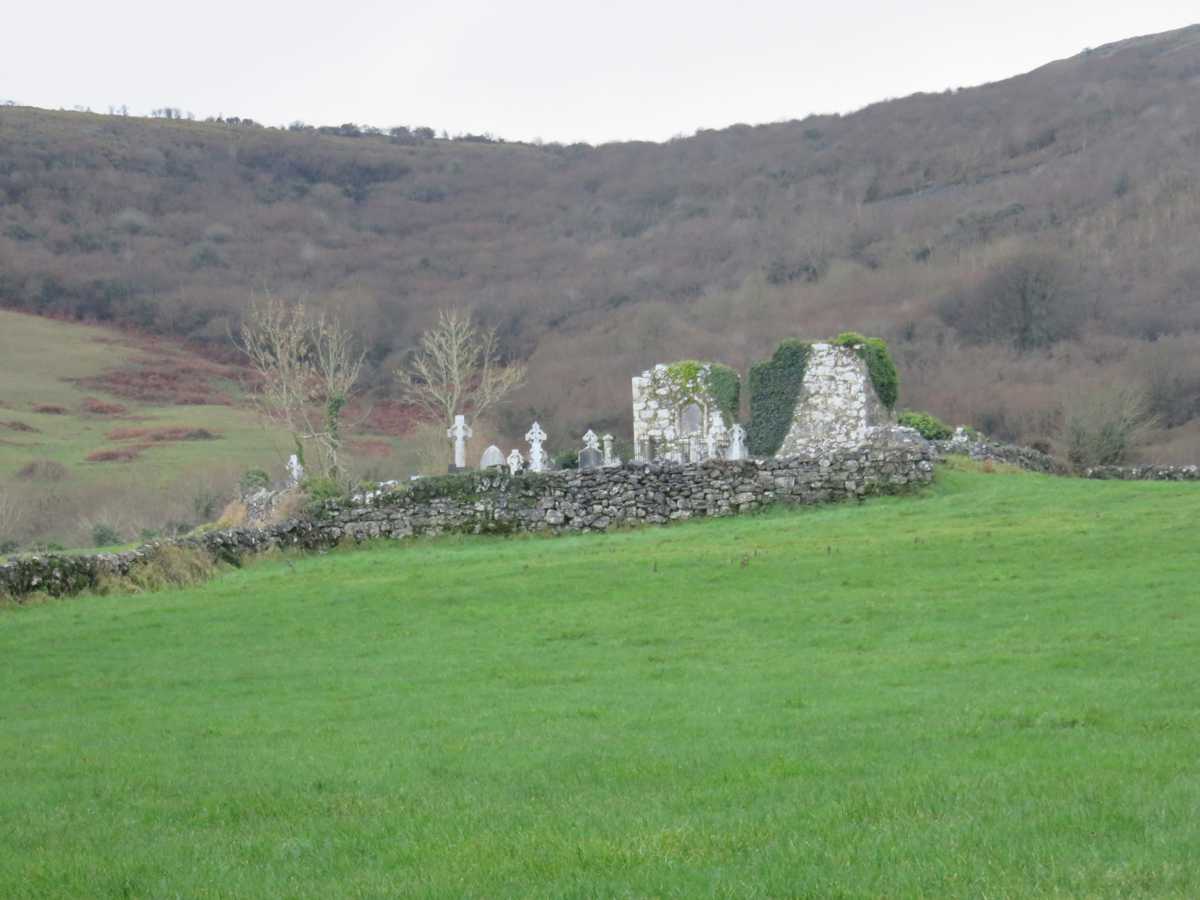 and some farms and got to the bottom of the decent, still oblivious to what lay ahead

Was actually still intrigued by the interesting landscape new to me 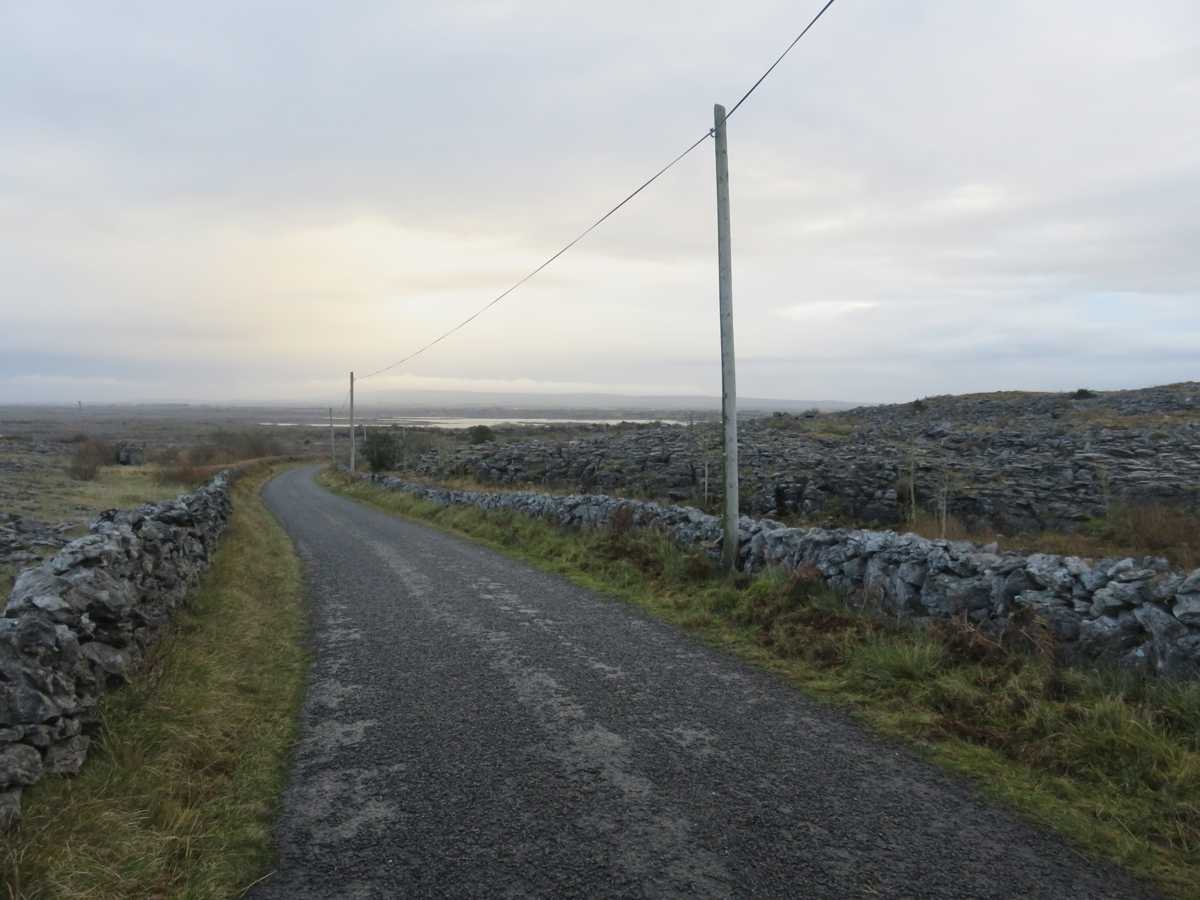 and these increasingly interesting patches of water 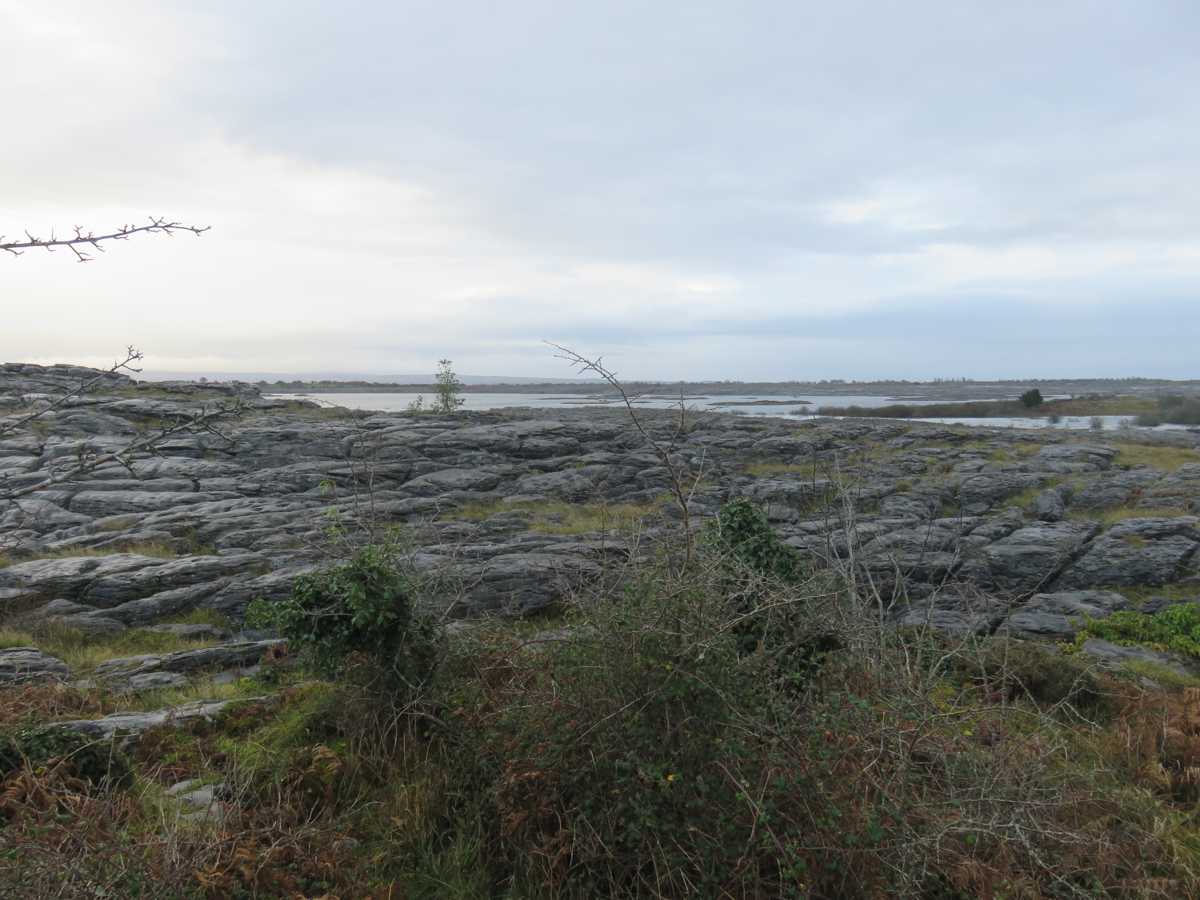 At the bottom of the decent a walkers path which leads up into the back of Cappaghkennedy. Many of the paths in the Burren are old pilgrims ways from the start of Christianity in Ireland and Western Europe.
The intersection at this point is also part of an old famine road 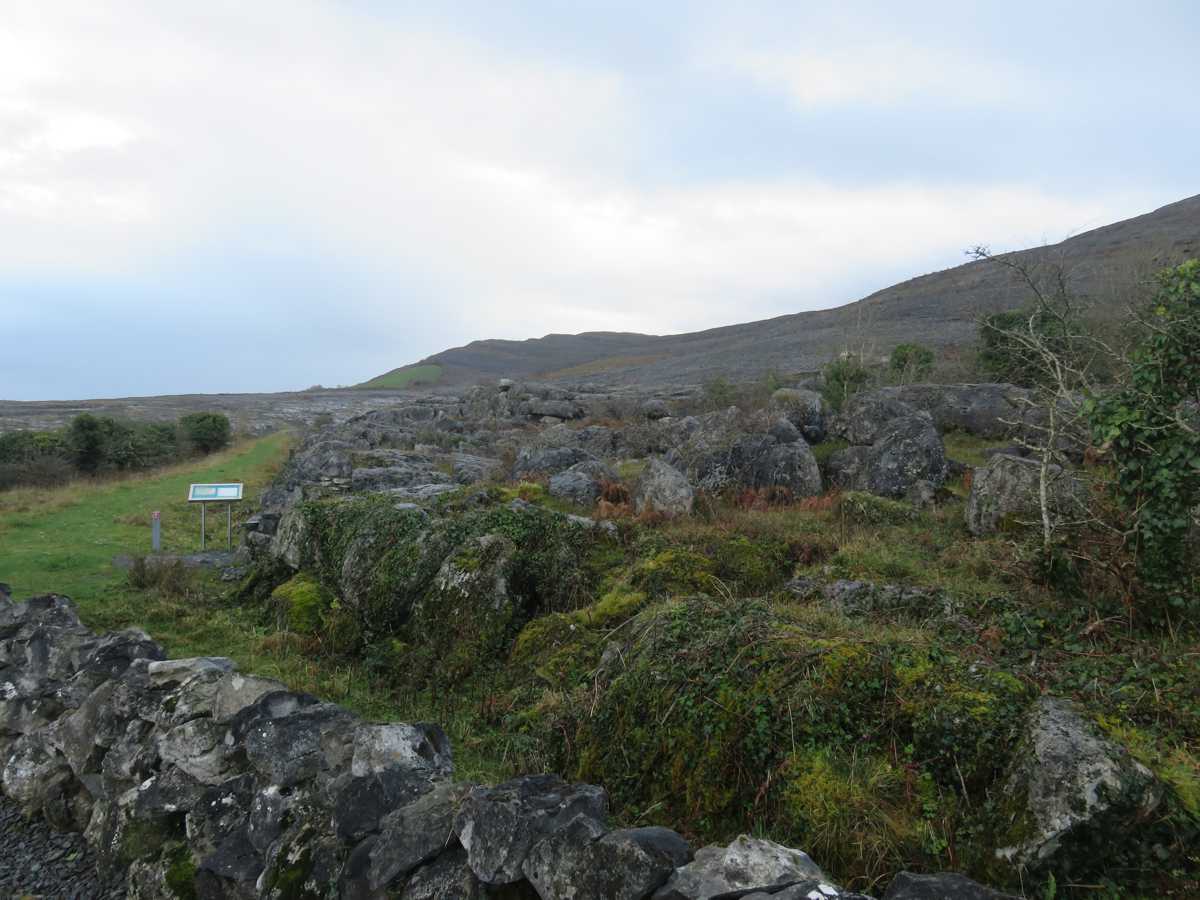 I can just cycle through it

It was a bit deep and the boots got wet, oh well they well they will dry out 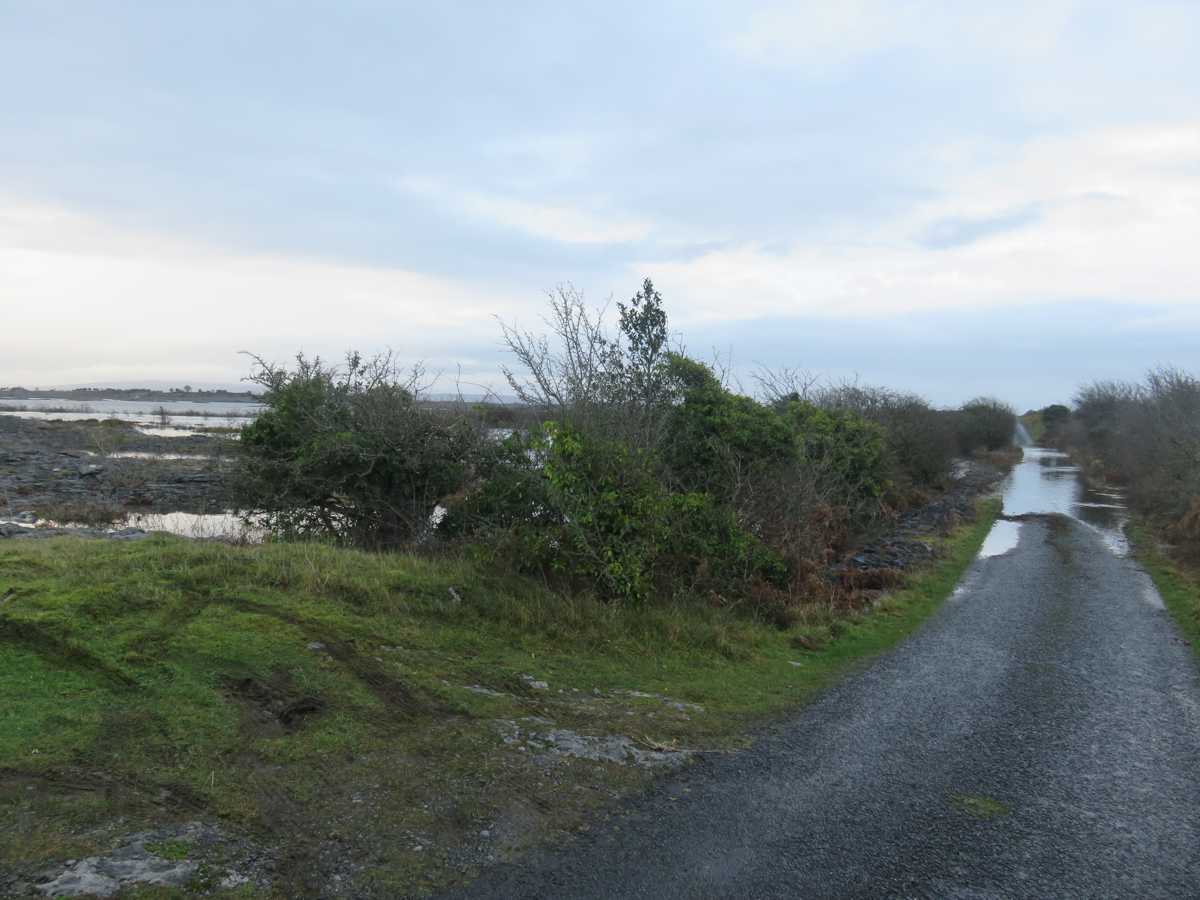 A few hundred metres further on and another flooded section with the water flowing across from one side to the other, mmm, doesn't seem to be too deep, I'll chance it 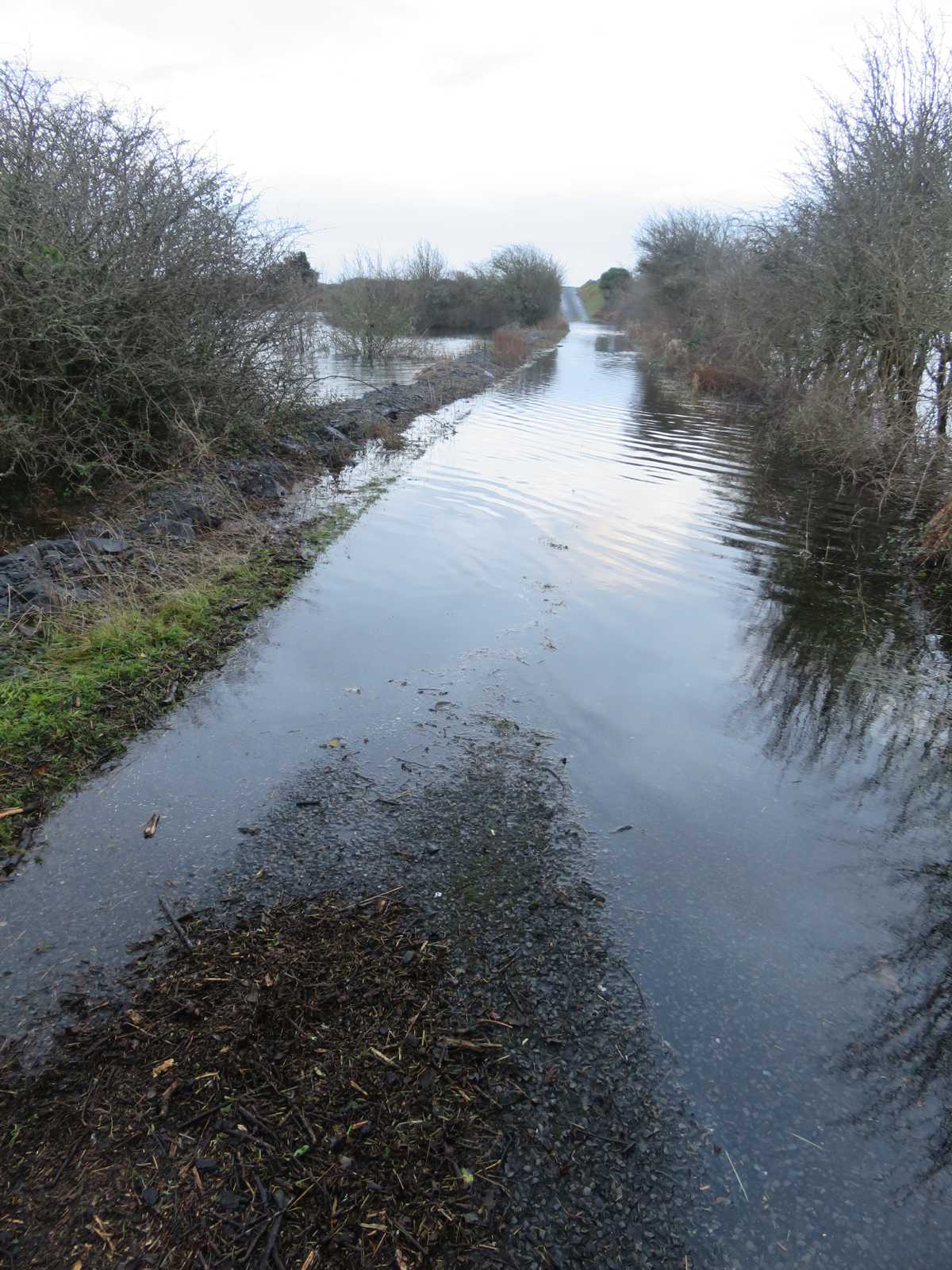 A bit deeper, but made it across with boots now saturated

Still checking out the landscape at this point 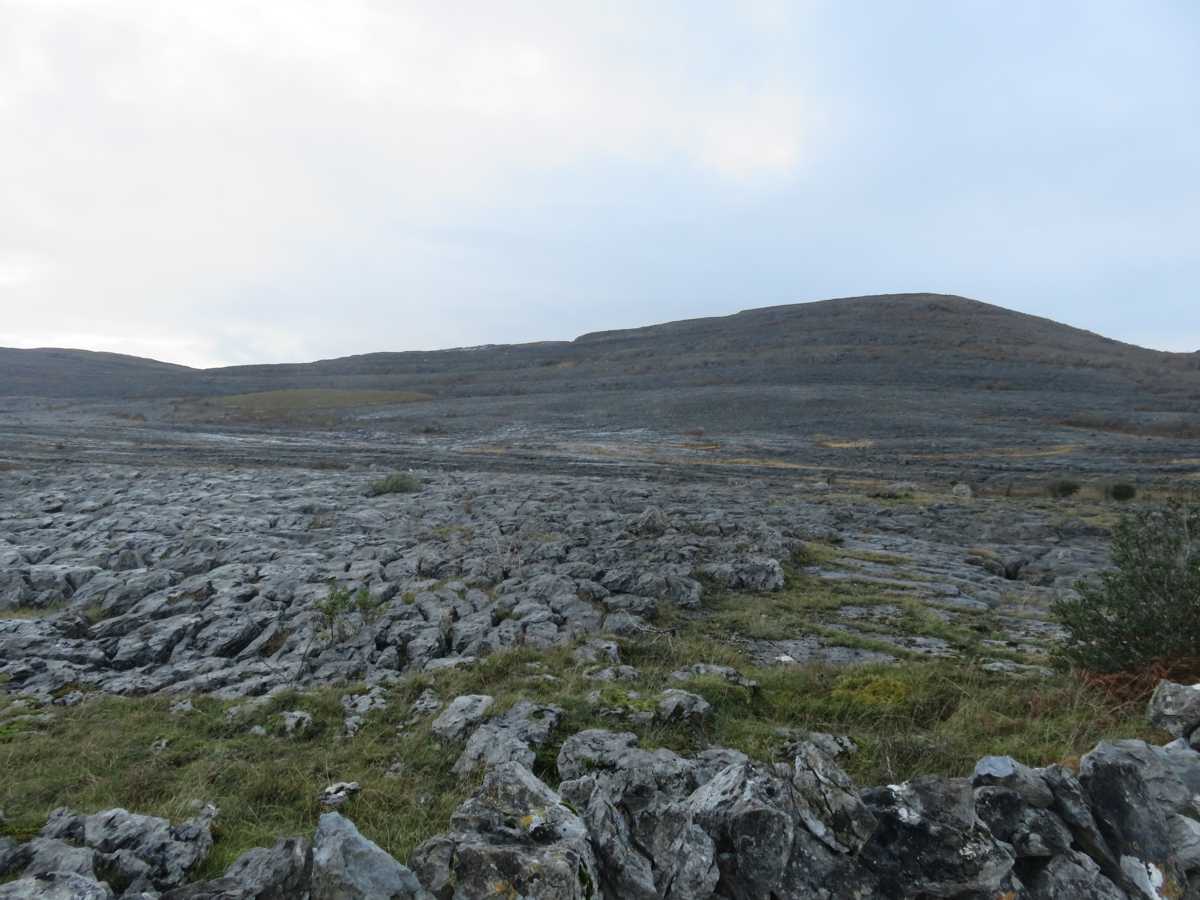 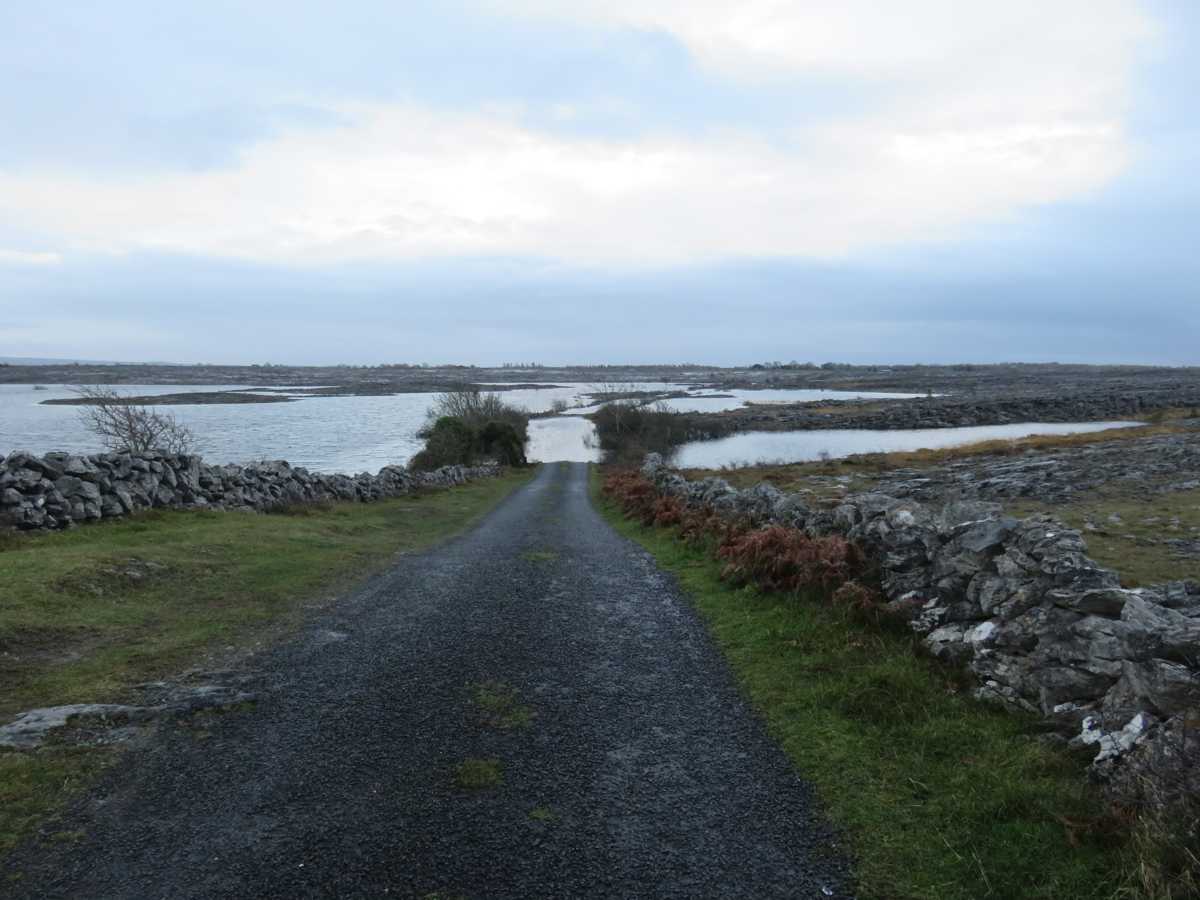 Oh well it would be a very long way back, might as well give it a go.
Water starts getting to over the axles of a 29" modern big wheel mountain bike

Water up over the wheels and almost at the handle bars

Would have made a great video or even photo

Low gear and I'm progressing slowly, astonished at how well I'm coping, although any deeper and I would be off and wading waist deep

Hopefully that will be the last, the next section goes onto a more main road, but it's getting dark now. I do have lights, but the front one is showing that it is almost out of power, so turn it off to conserve it.
Got to the road and phew I'm cruising along again

A farmers 4x4 approaching in the distance at high speed, I put the front light back on flashing, farmer passes giving me the thumbs up

Got to the next turning back onto the final section of rural road back to the car and through what I assumed would be my only obstacle, the short section I didn't want to drive the car through right at the start.
Mmm, I guy can dream 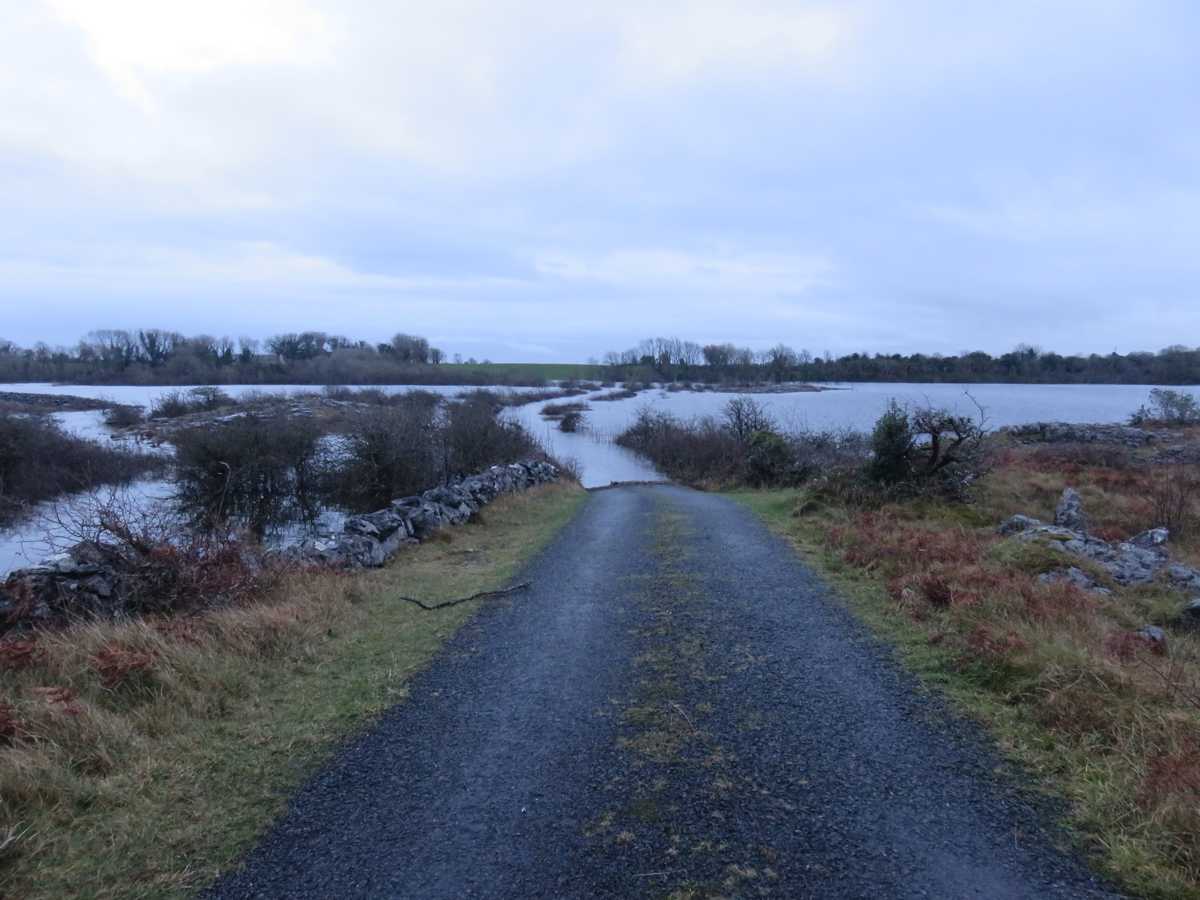 Oh well, boots and trousers are soaked now anyway, but I could see this was going to be a long one

No too much further along and 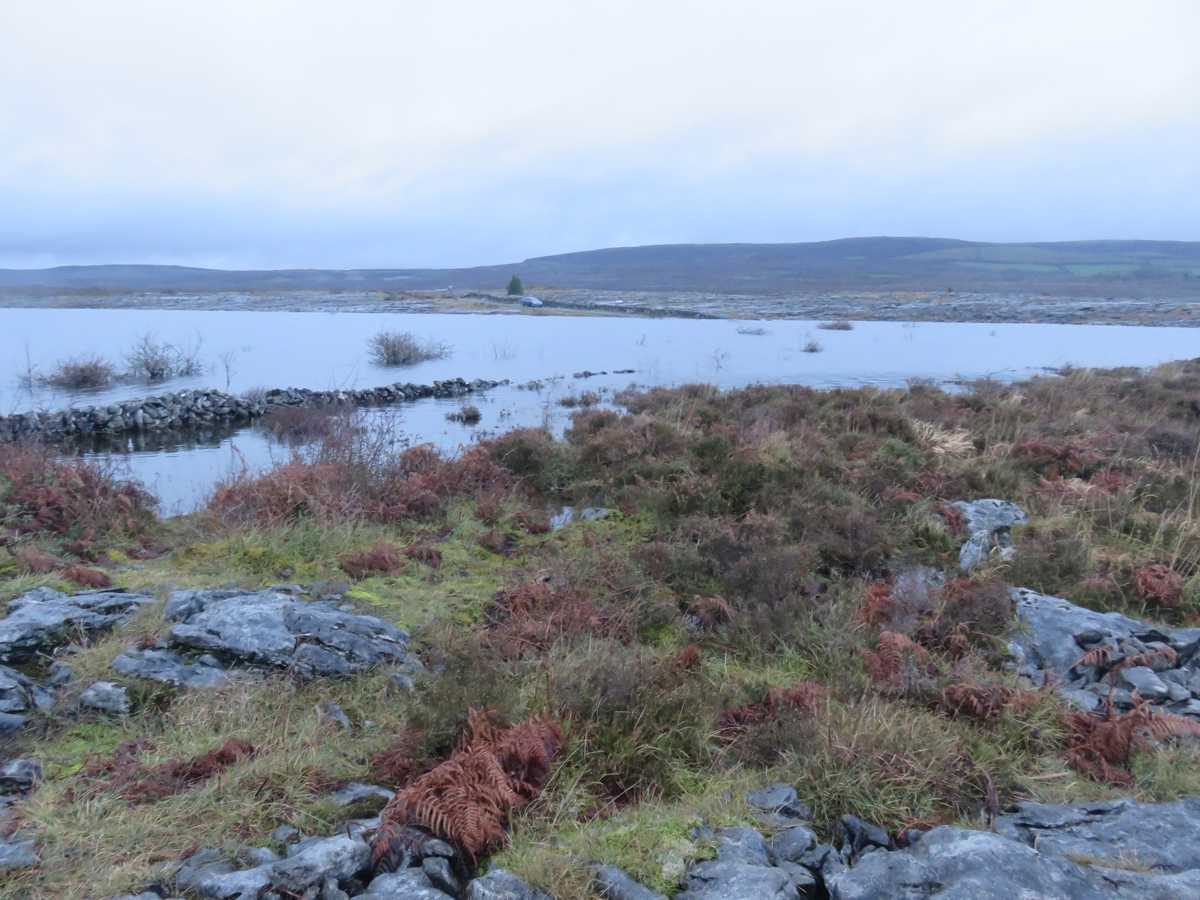 This would be chest deep if I was standing up, I could just tell

Check out the abandoned car stuck between this section and the section I didn't want to drive through.
View from the other side 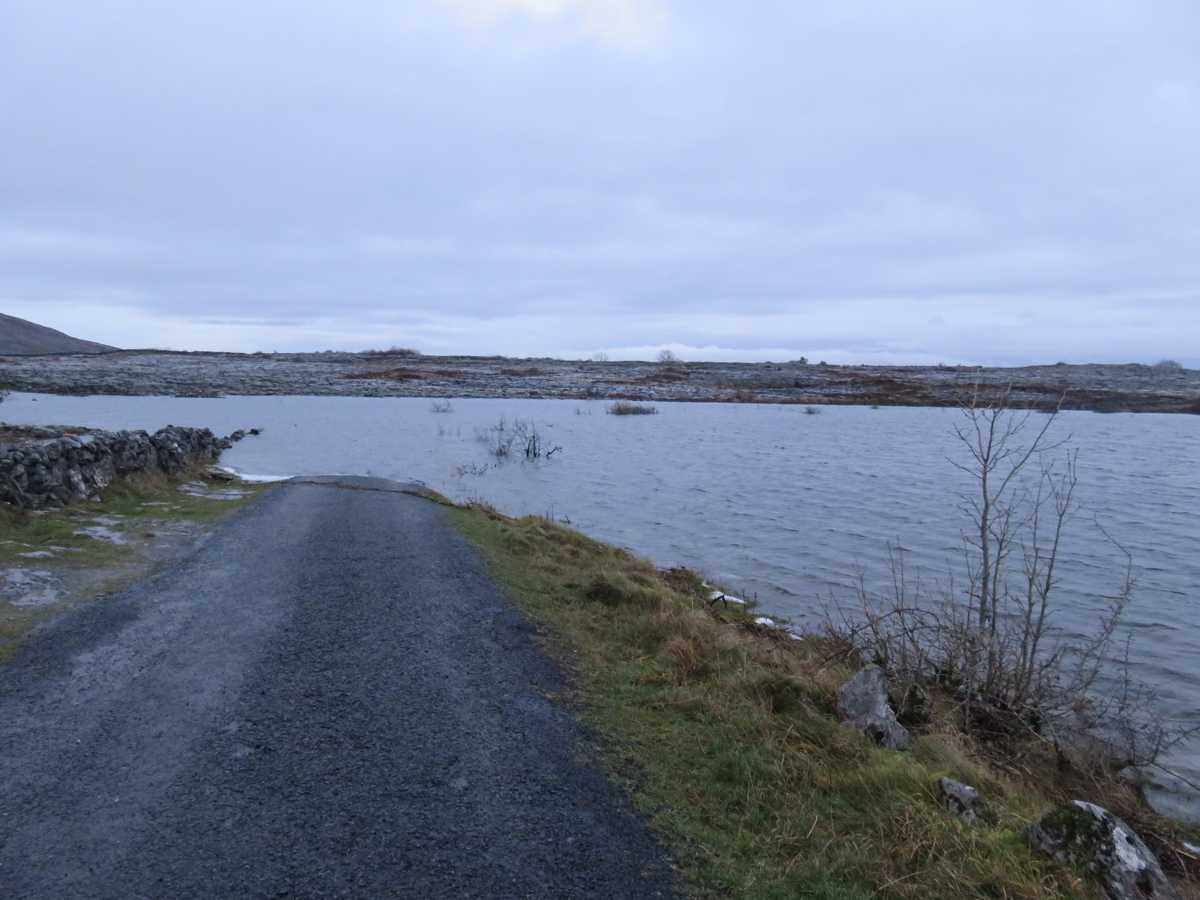 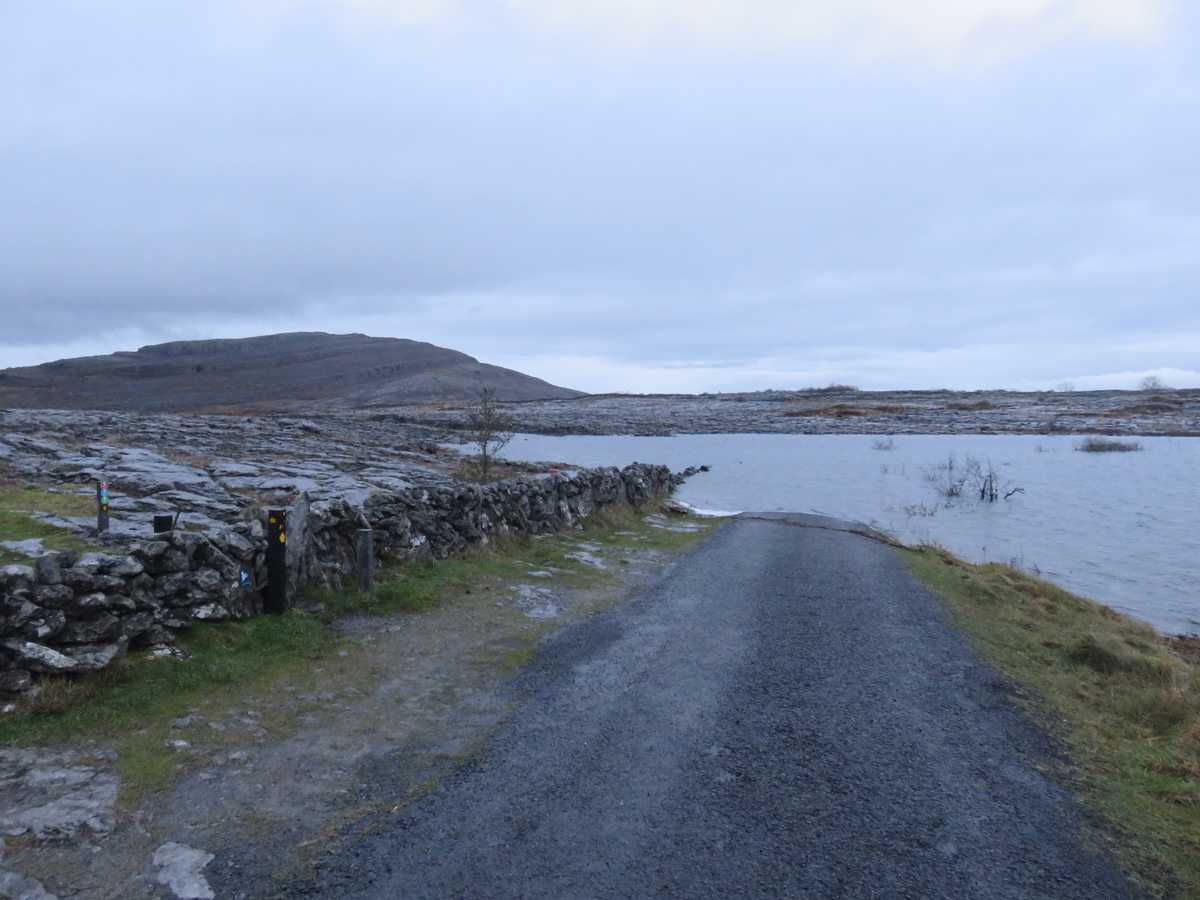 and again from further along 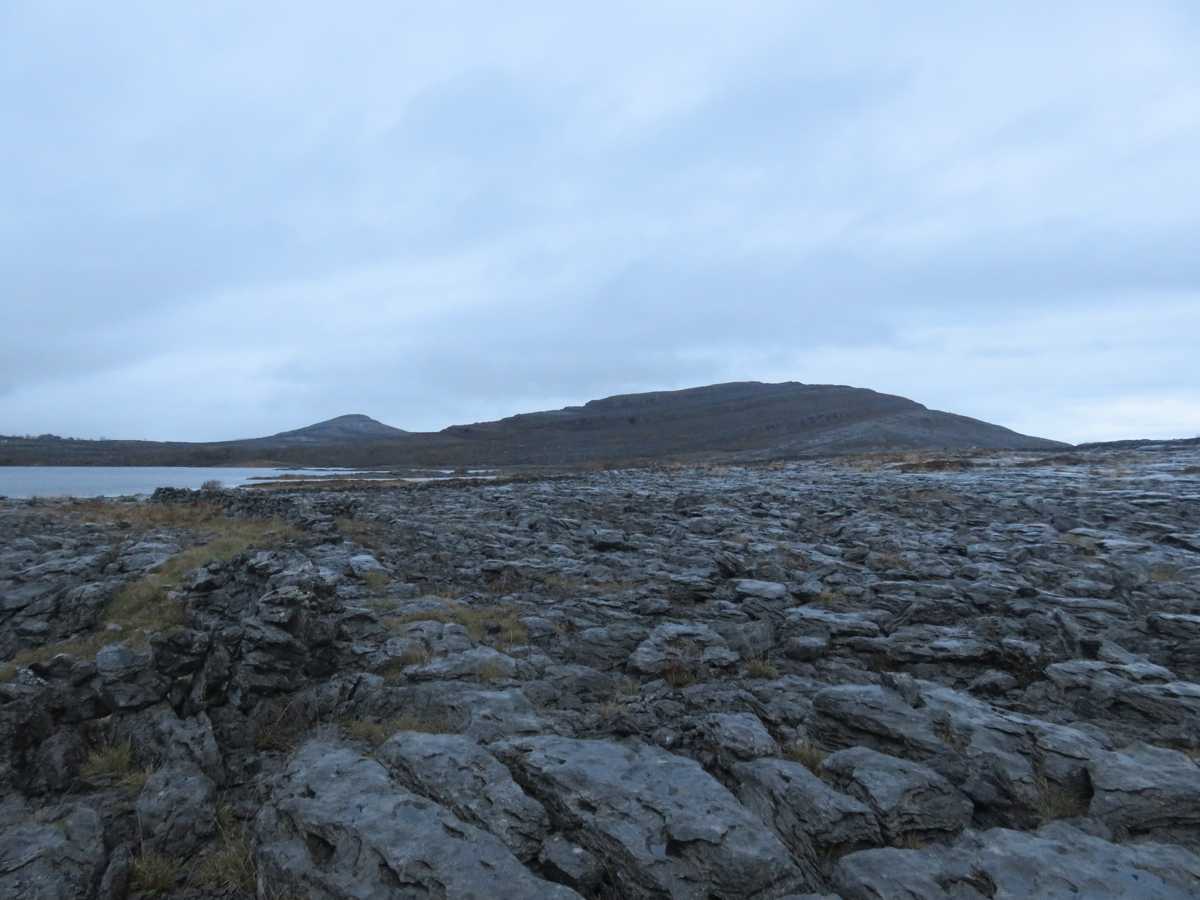 with the only permanent lough thats marked on OS maps of the area.

There were a couple more aqua cycles including the one I declined driving through at the start, but nothing in comparison and easily cycled through

Safely back to the car as the final light in the sky faded.
Off with the boots, left the socks on, but very numb feet

I was so hoping this would be a mini adventure I actually managed to finish in the daylight, oh well c'est la vie

I love limestone pavements, be nice to get to the Burren one day. Thanks for sharing.

You can check forecast before the trip, happy there is not rain expectation for the day, then you get there, start the trip...and.......you get wet anyway

Well done Craig, you managed it and you got safely back to your car

Next week lower temperature forecast, so ice skates on and once again

I love limestone pavements, be nice to get to the Burren one day. Thanks for sharing.

The Burren has a lot of history, and I will get up again this Sunday and walk up Cappaghkennedy and hopefully get some photos in good light...
Last edited by ancancha on Fri Jan 08, 2016 7:06 pm, edited 1 time in total.

You can check forecast before the trip, happy there is not rain expectation for the day, then you get there, start the trip...and.......you get wet anyway

Well done Craig, you managed it and you got safely back to your car

Next week lower temperature forecast, so ice skates on and once again

Getting colder in Ireland now as well, and I notice the snow on the Cairngorm cams.
You will be in full kit with ice axe and crampons for your adventures now Petr

Brilliant stuff ancancha, can't believe you made the ride through water that deep, even with a good road below it's still bloody hard going when it's wheel deep

Great to see another area hitting our section, looking forward to seeing more of Ireland in the near future

Half wheel depth and I'm off and pushing, to be fair this is on a moving gravel bottom though 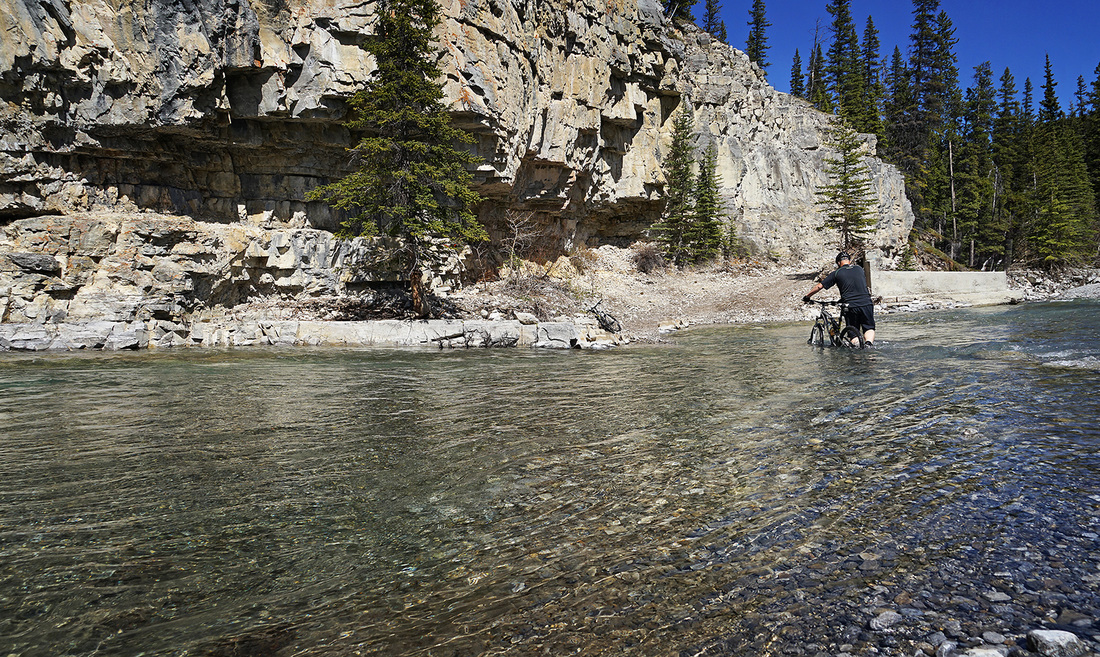 ChrisW wrote:Brilliant stuff ancancha, can't believe you made the ride through water that deep, even with a good road below it's still bloody hard going when it's wheel deep

Great to see another area hitting our section, looking forward to seeing more of Ireland in the near future

Half wheel depth and I'm off and pushing, to be fair this is on a moving gravel bottom though

Cheers Chris
I've had a few goes in the Scottish rivers and burns on the mountain bike, they have the smooth wet big round pebbles for want of a better description

Unless it is shallow and a very short span then I likewise am off and pushing.
I was amazed at times how well it went, only a very minor slipping of the back tyre in low gear and only on one particular stretch

The water was very clear, no peaty / muddy silts around that place, so had the benefit of always being able to see the road and keep on the tarmac

Very glad I oiled it all up before starting