Mullagh More.gpx Open full screen  NB: Walkhighlands is not responsible for the accuracy of gpx files in users posts

WH OS only covers UK, but you will be able to import the route into google earth

For those who can't be bothered, then this is what it looks like 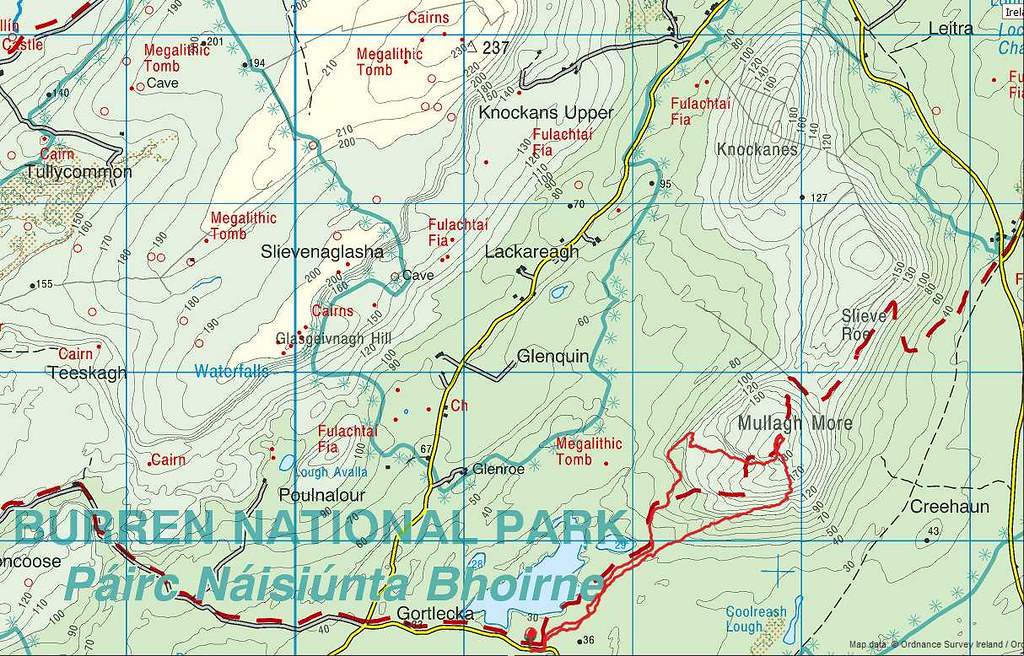 Now I know what's out there and how to get to it, I couldn't resist going back and checking out this intriguing looking lump of rock.
Arrive in time to get a photo mirrored in the perfectly still lough 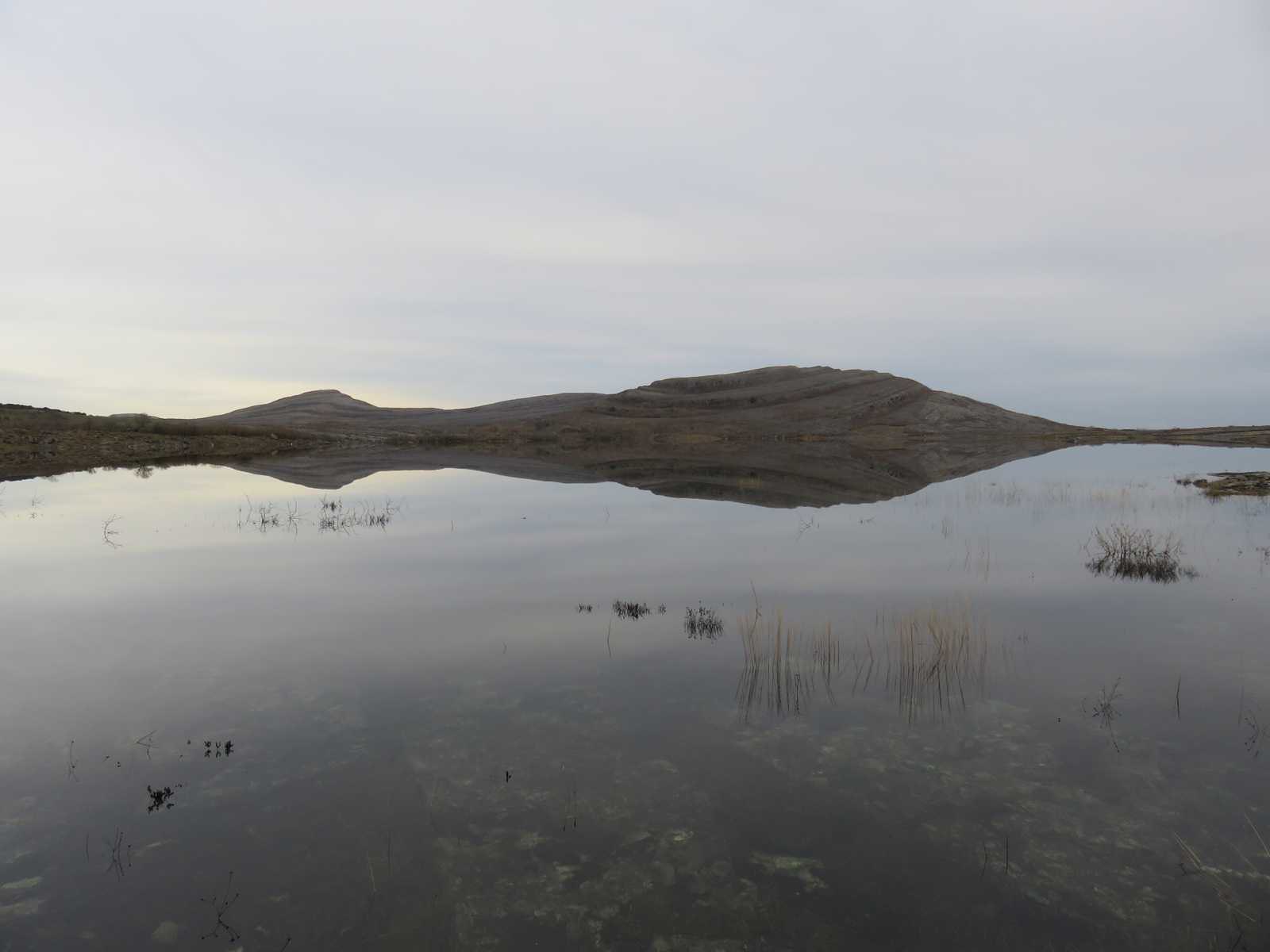 I knew from last weeks escapade on the bike that there was a marked track heading in the direction of Mullagh More, and headed along suspecting I would have to make a diversion pretty quickly as the path would inevitably lead into the flooded lough 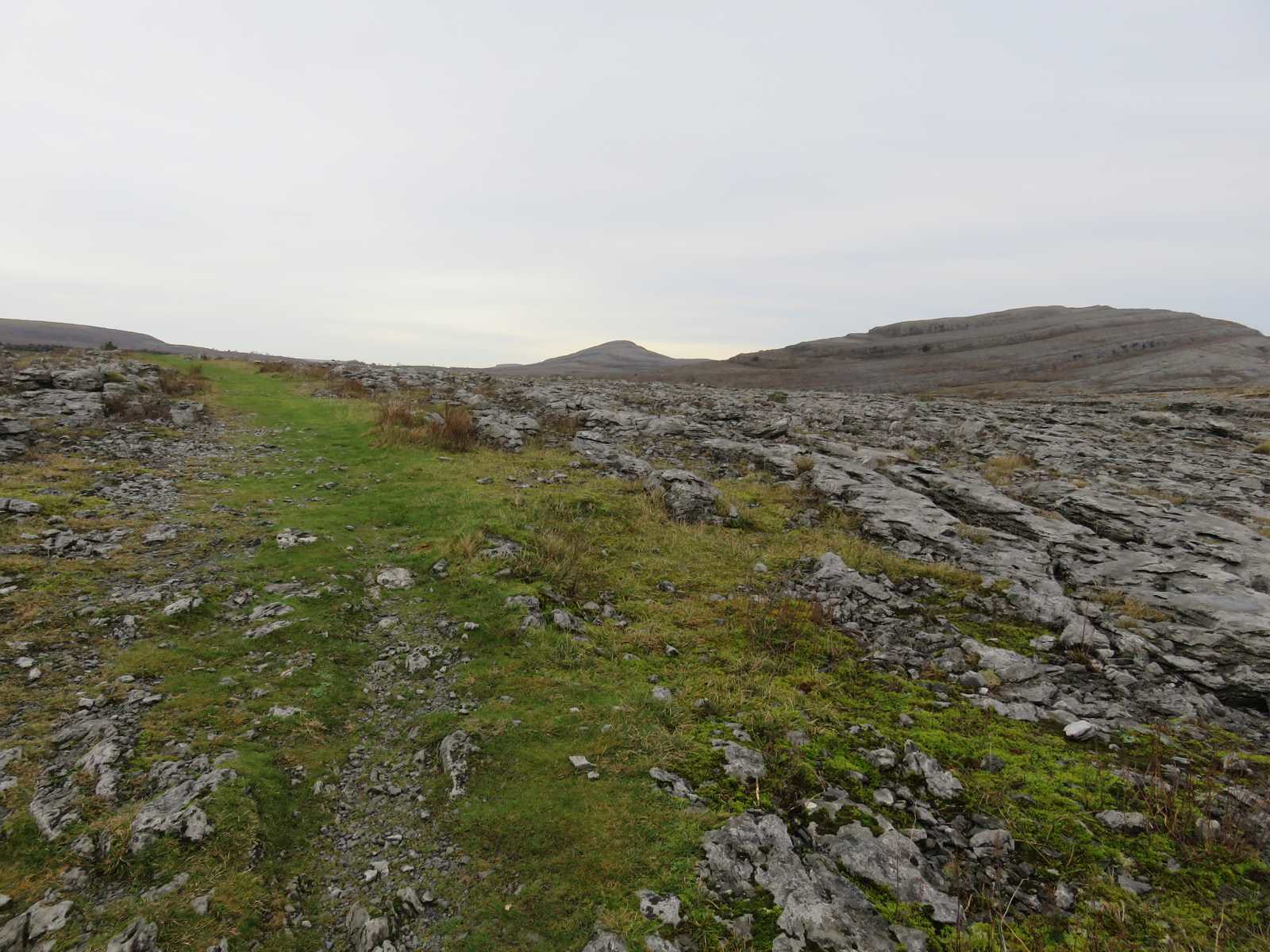 and so it was, but the ground is fine, rock hopping, but fine.
Another of the interesting walls 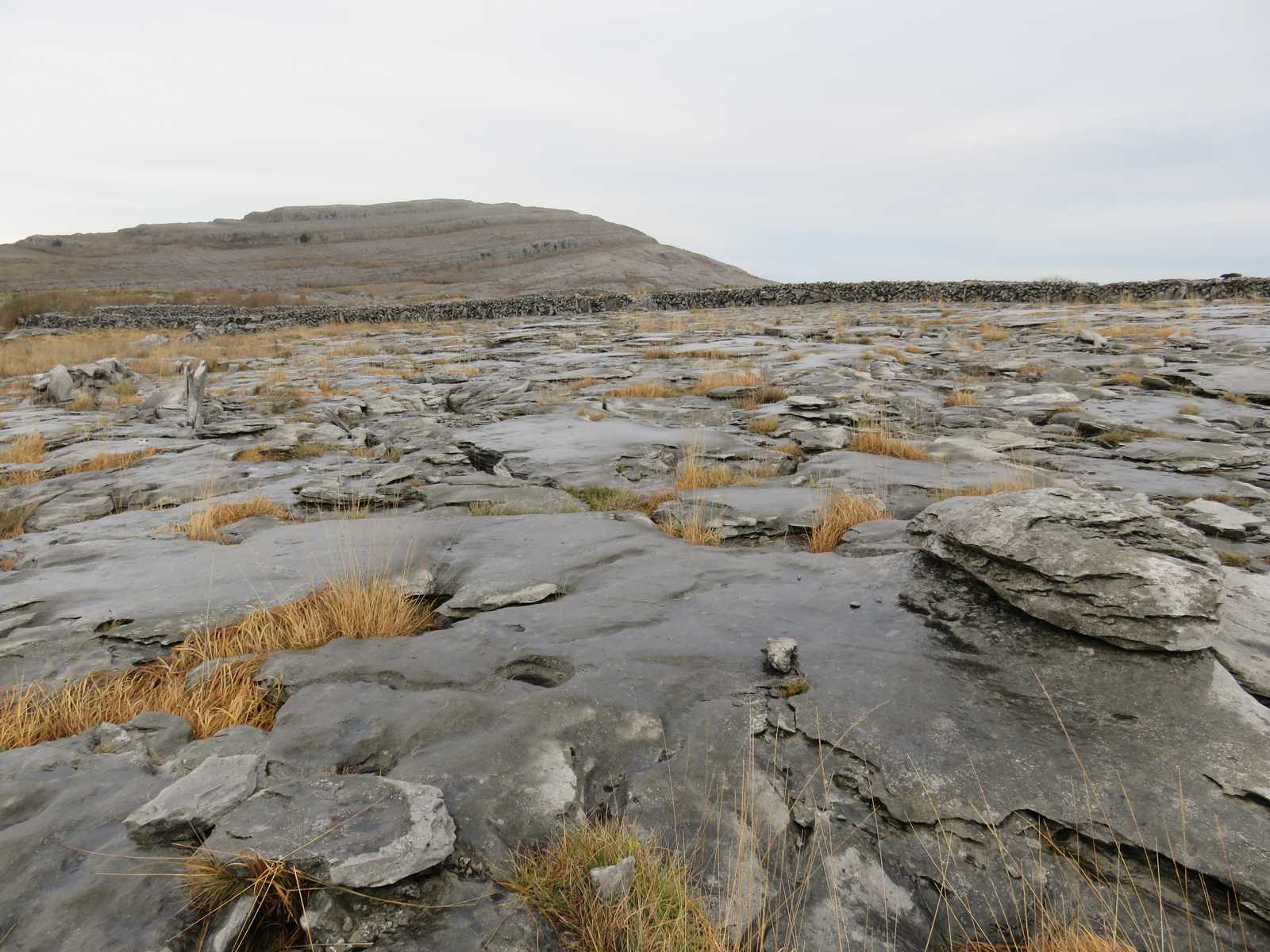 I'd noticed that at the end of the helix for want of a better description it looked a pretty tame ascent, so skirted round this wall and proceeded up below the lower cliffs 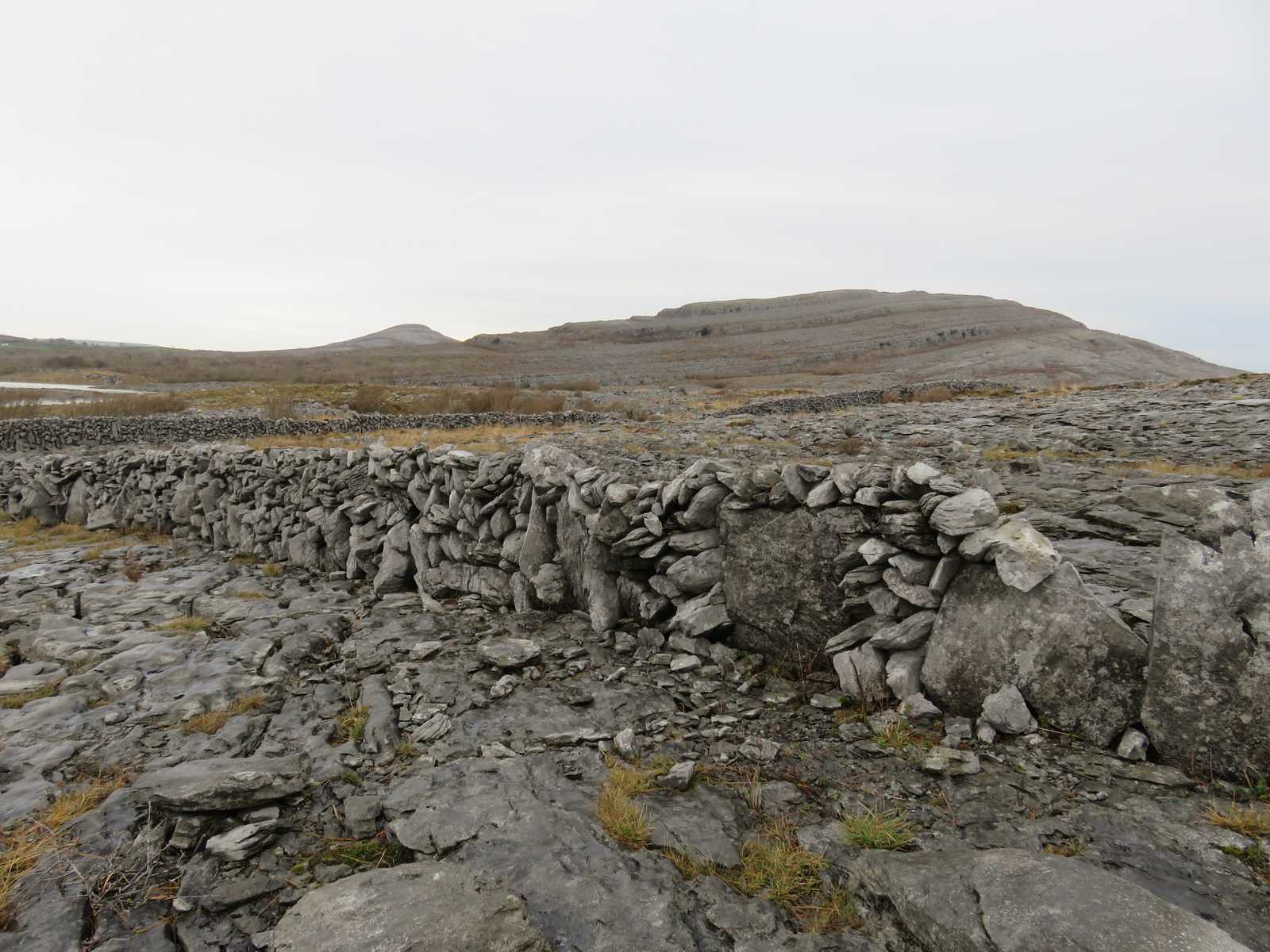 The rocks are deceptive, not always solid

So even though it isn't at a thousand metres, due care and attention needed 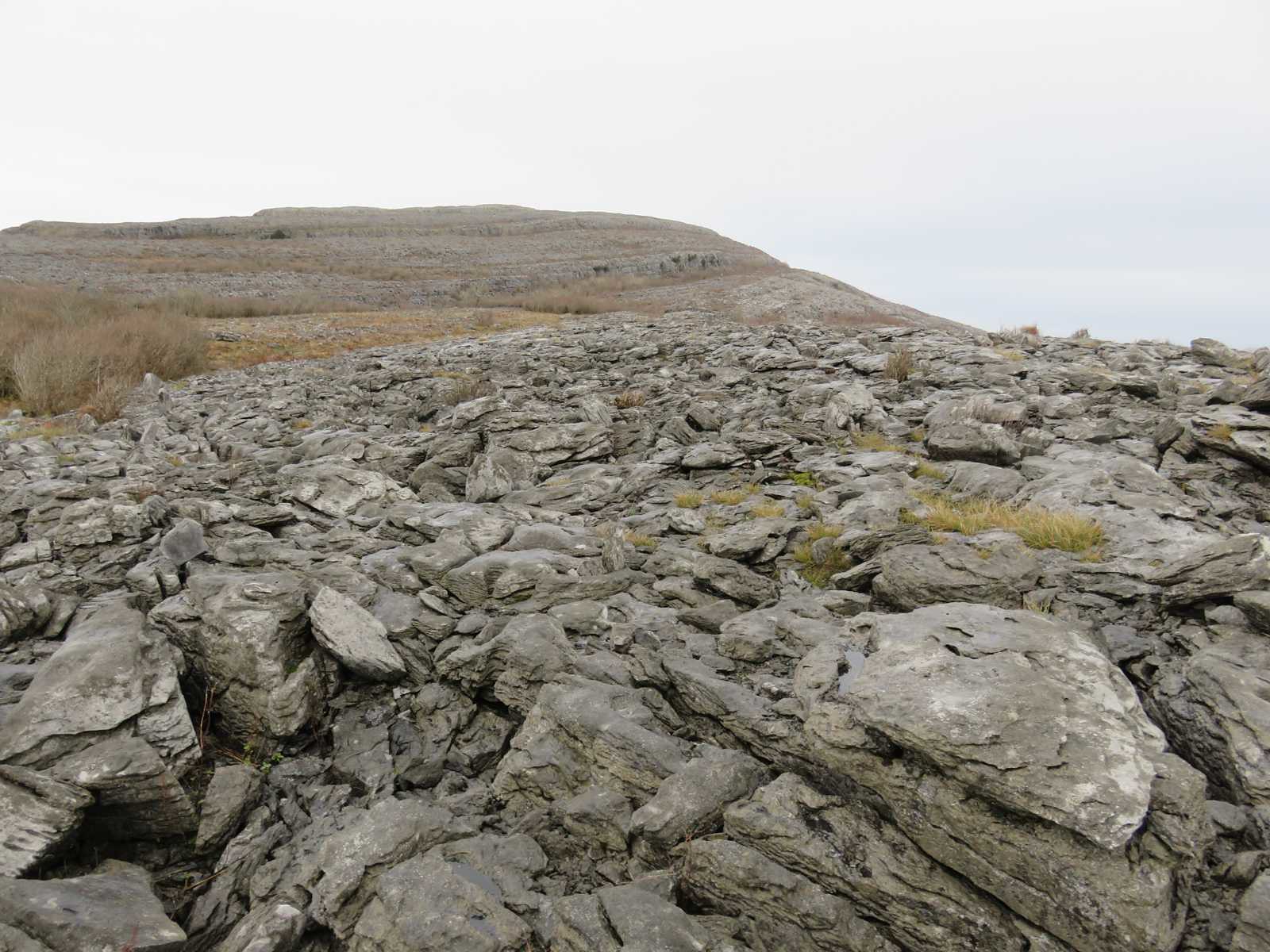 Another wall with a gap for something to get through, possibly it's modern for dog walkers 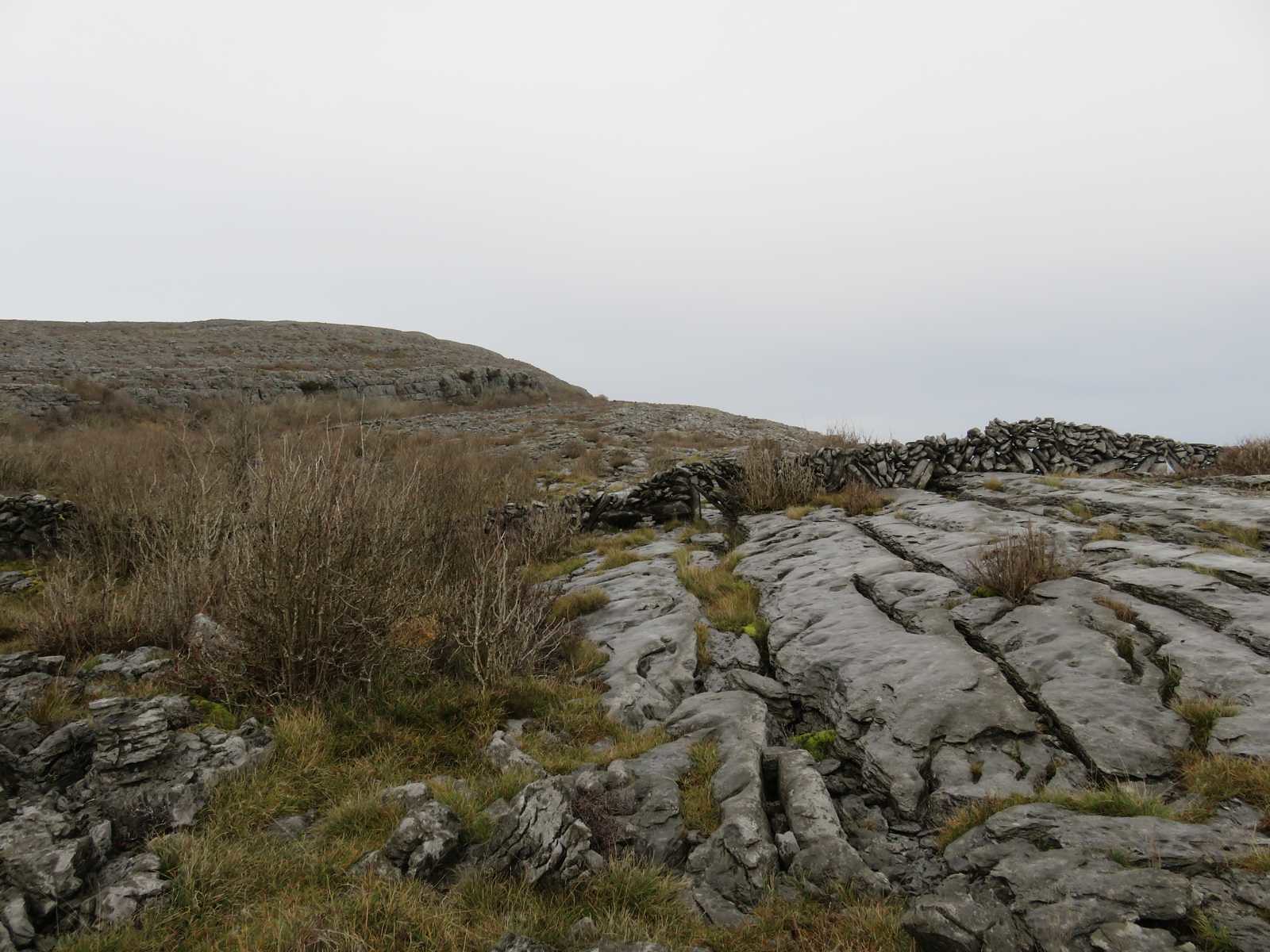 I doubt they would have erratics here

So this was interesting, there were a few others, probably rock fall that's eroded over time 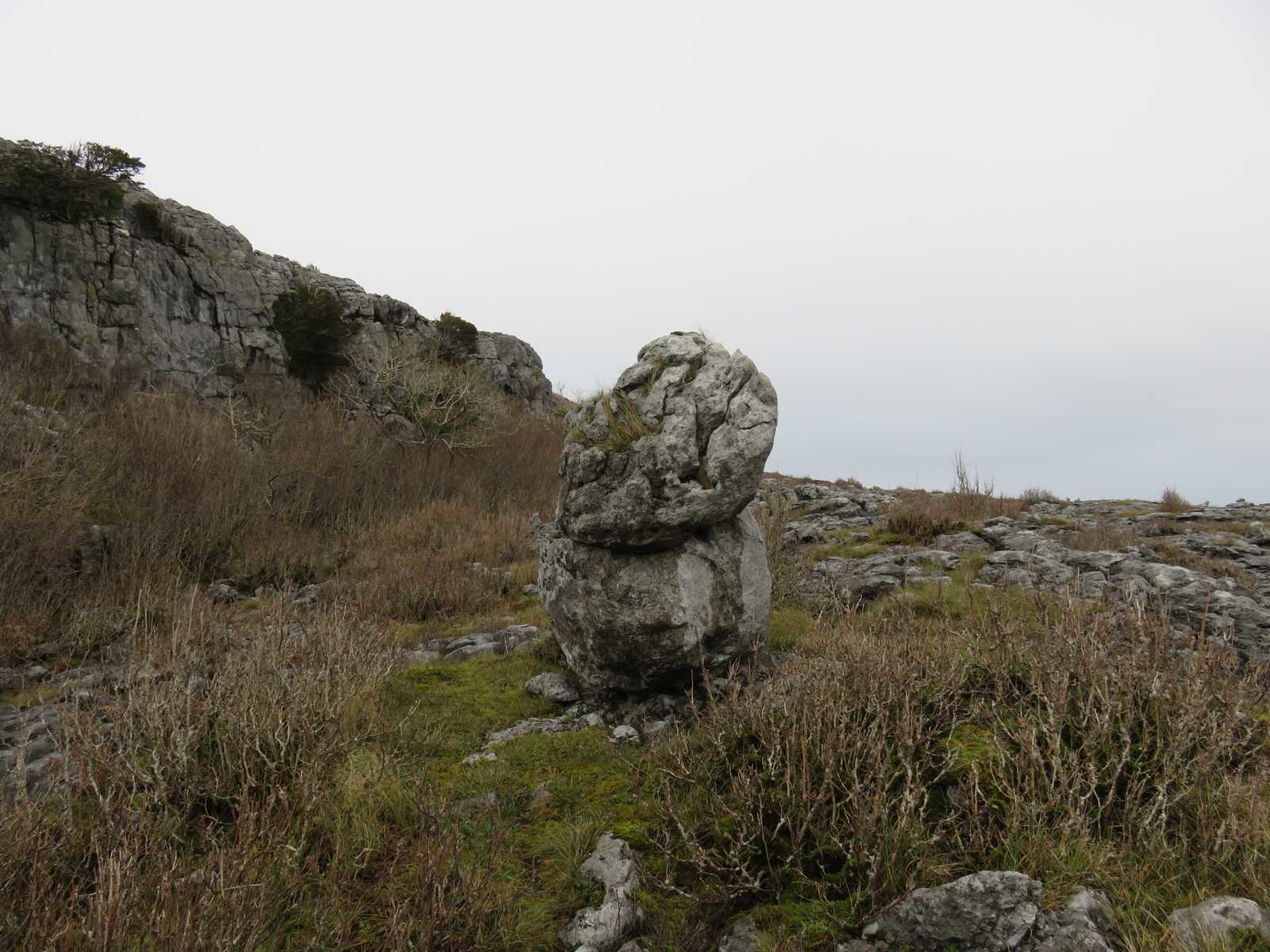 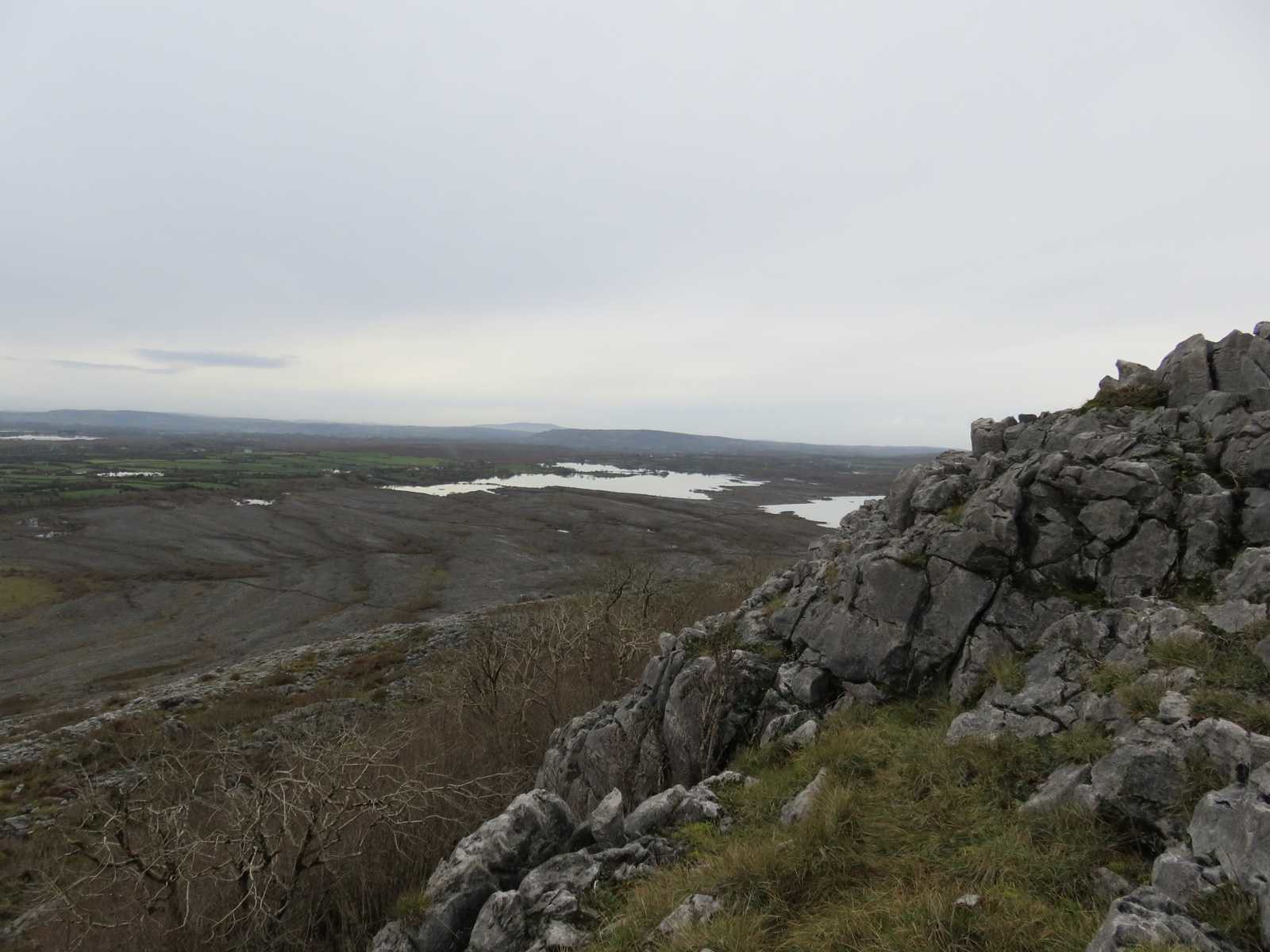 Not sure how long this creature had been watching me climb up, but it and its chums further along were very docile and just watched curiously as I made my way along 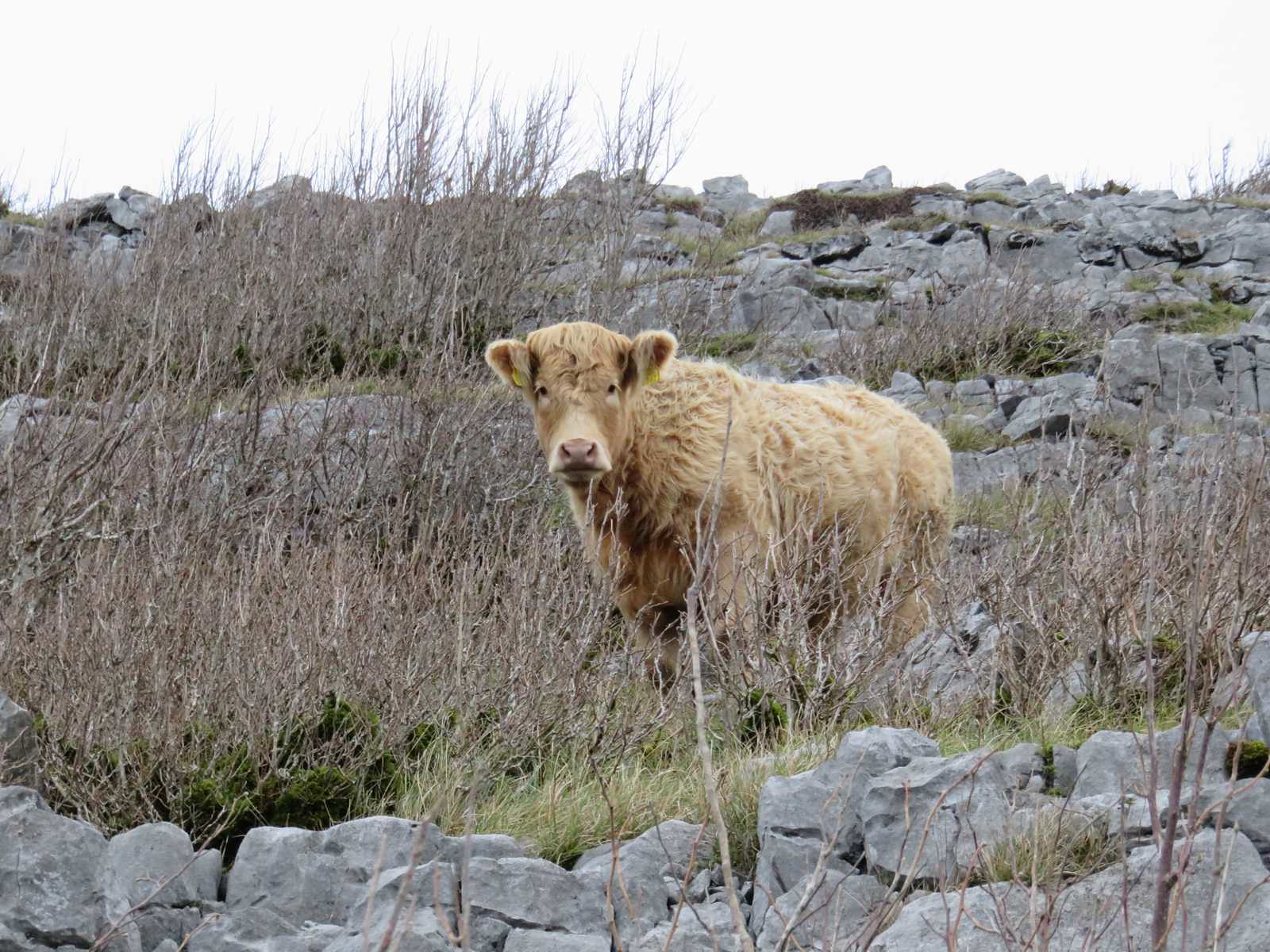 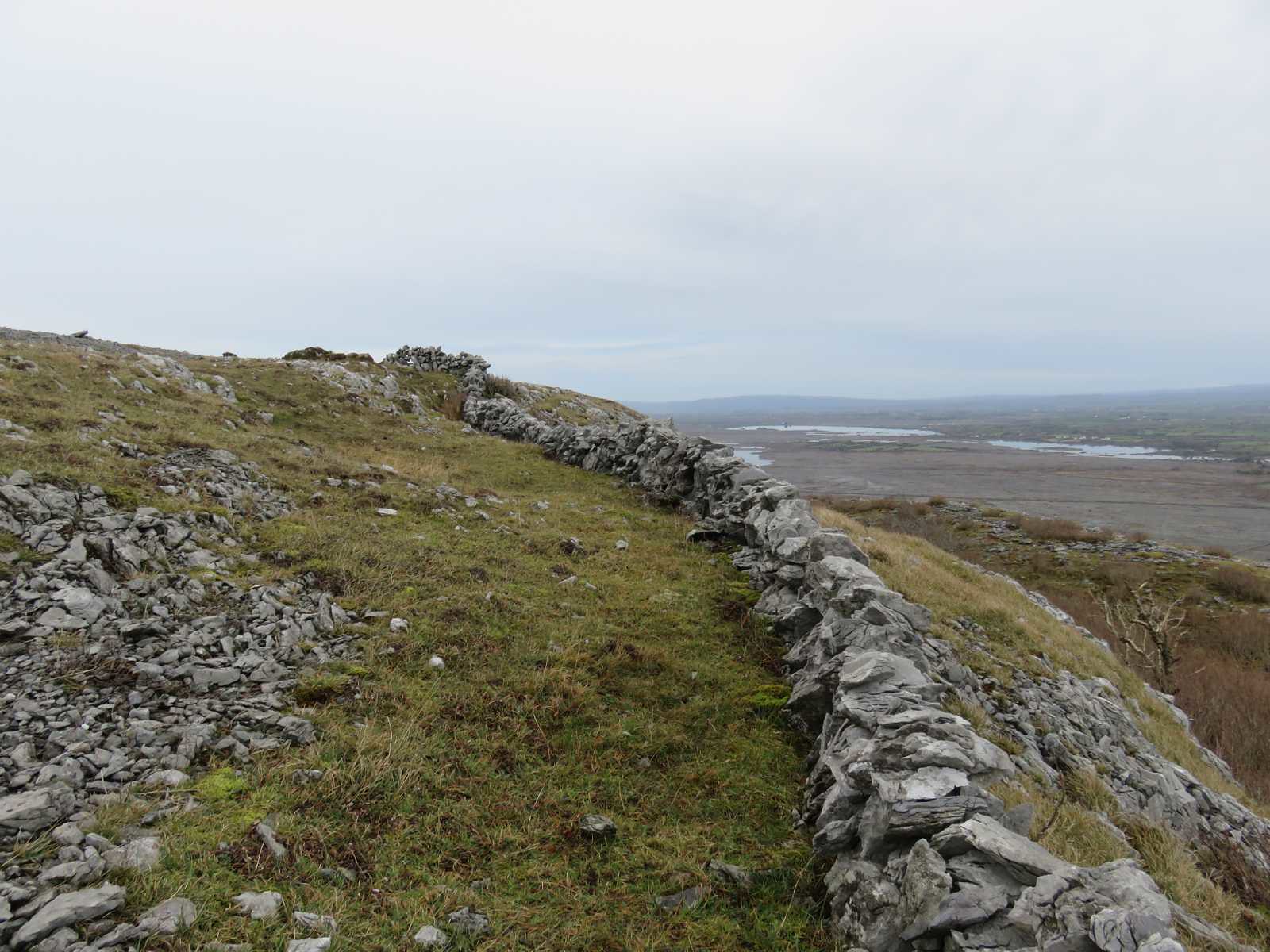 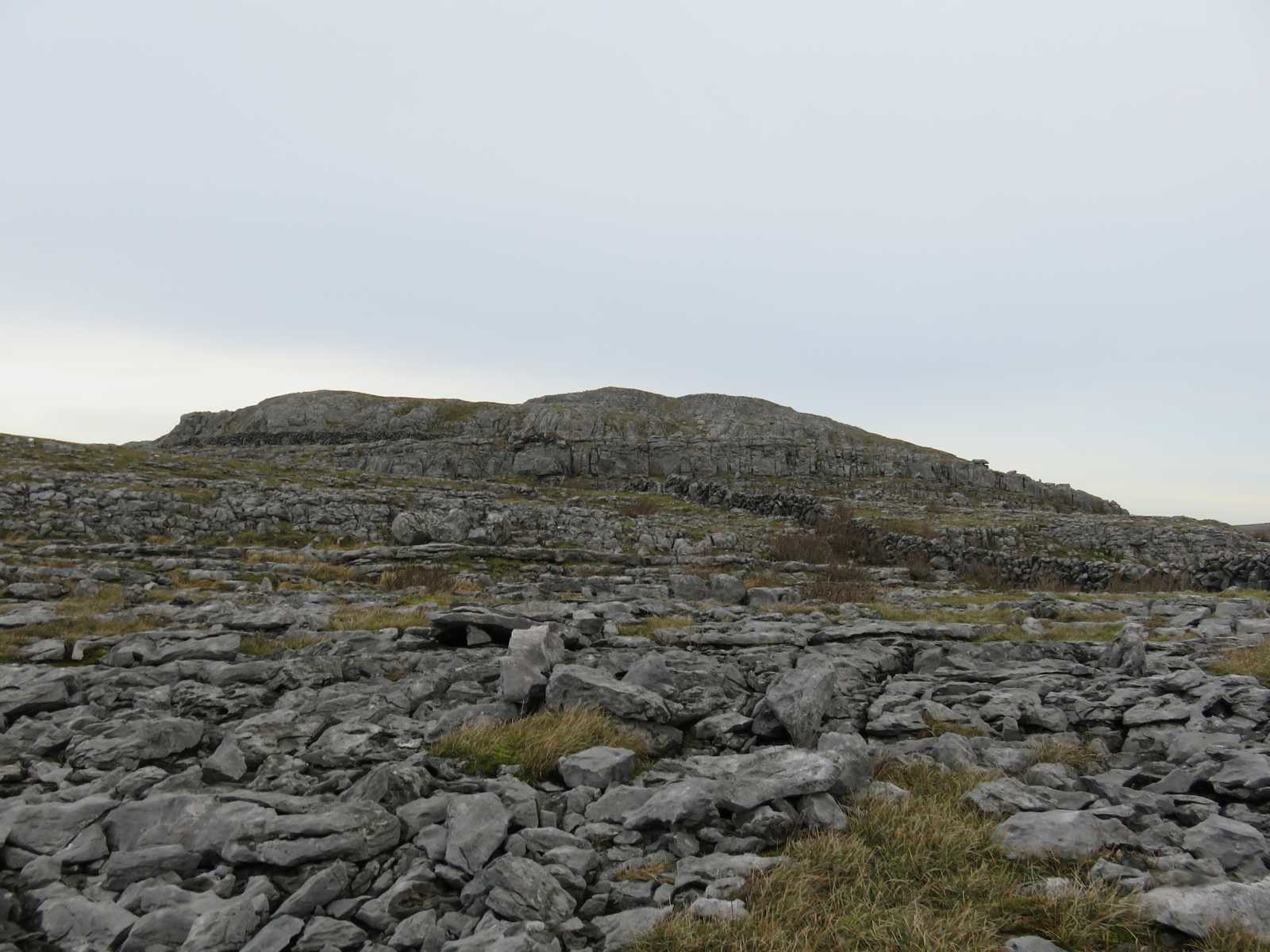 A wall with a view 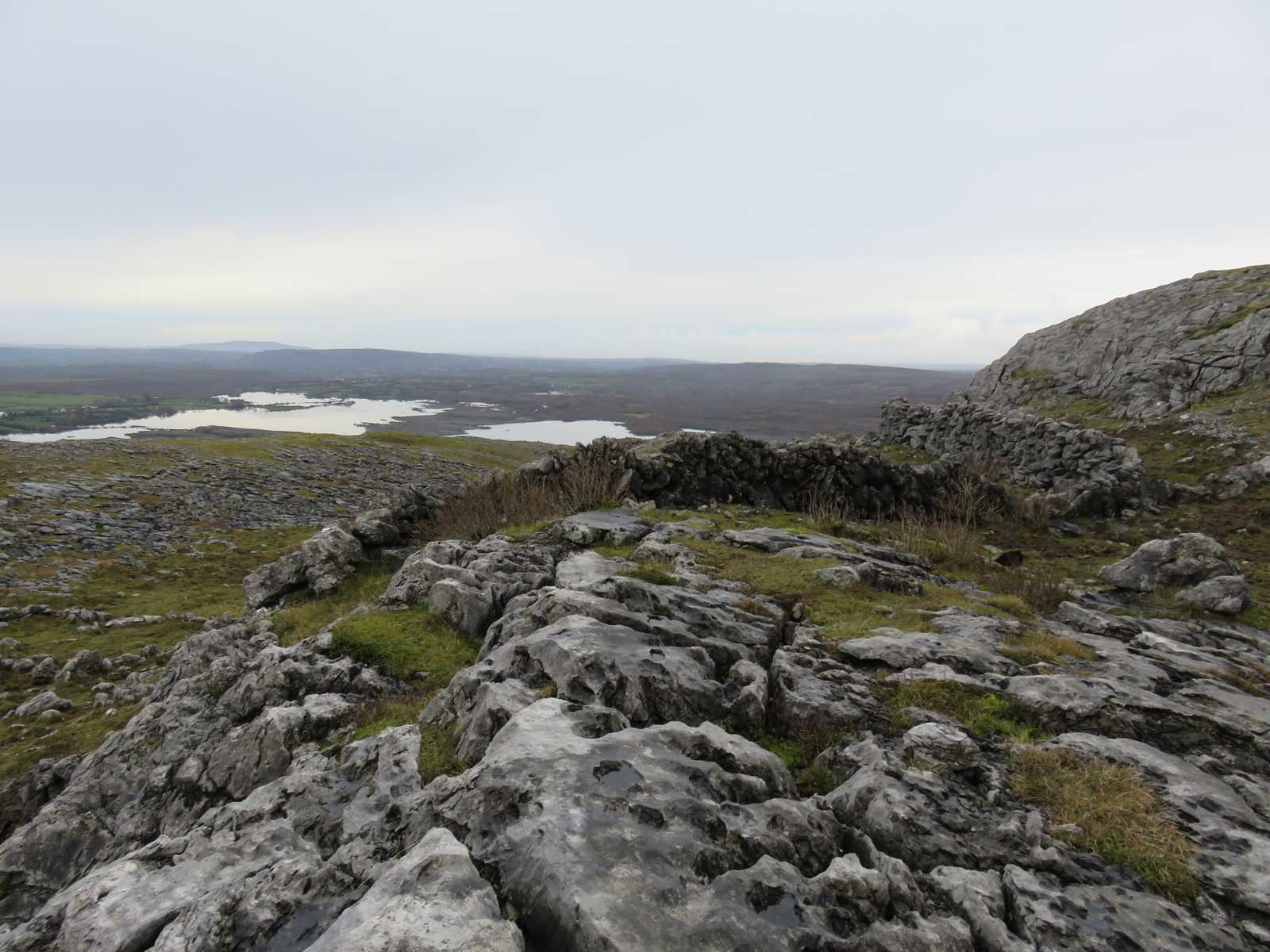 I guess they aren't short of material around here

The view north from about the same spot 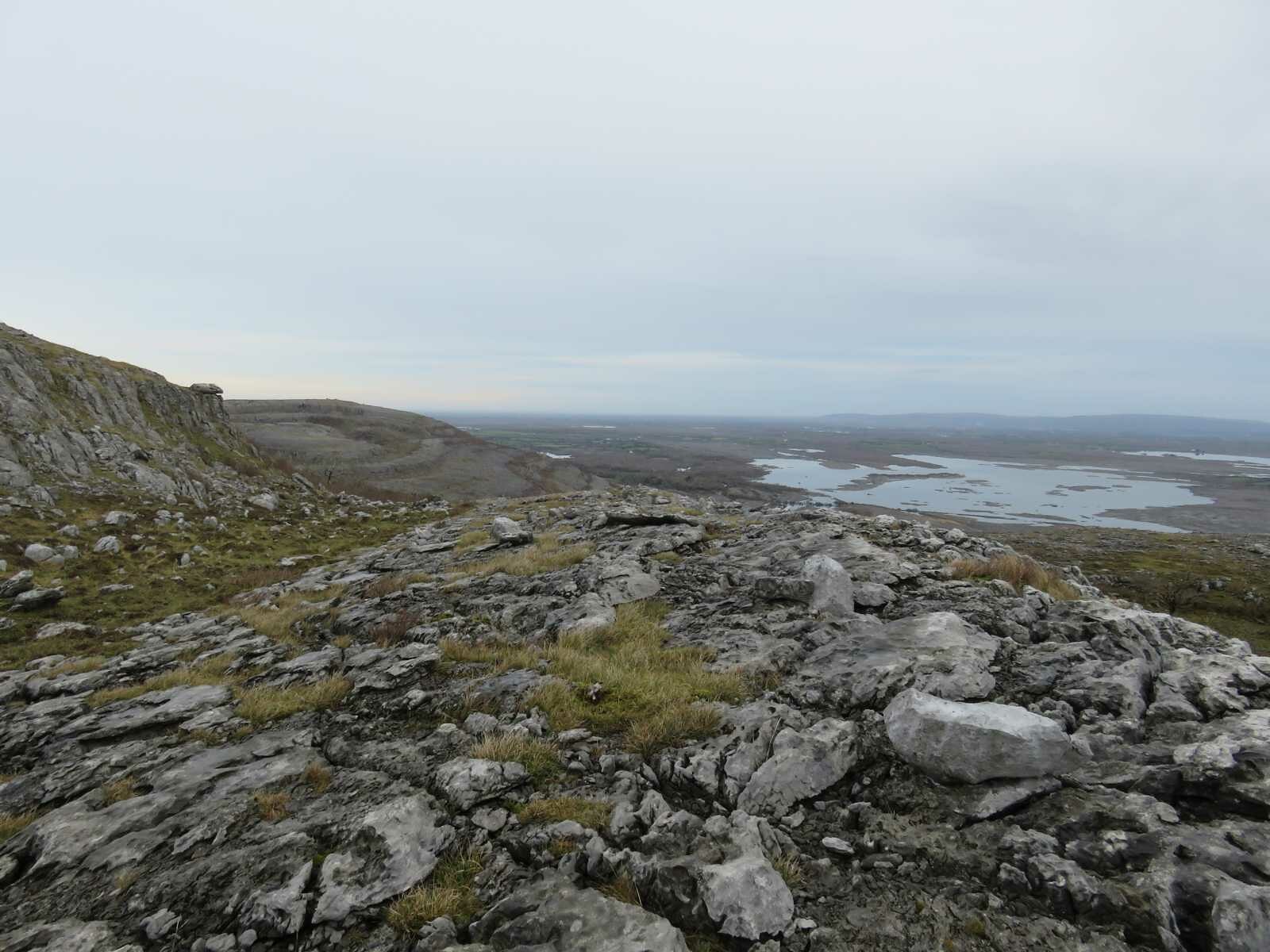 Then a view of the cairn at the top 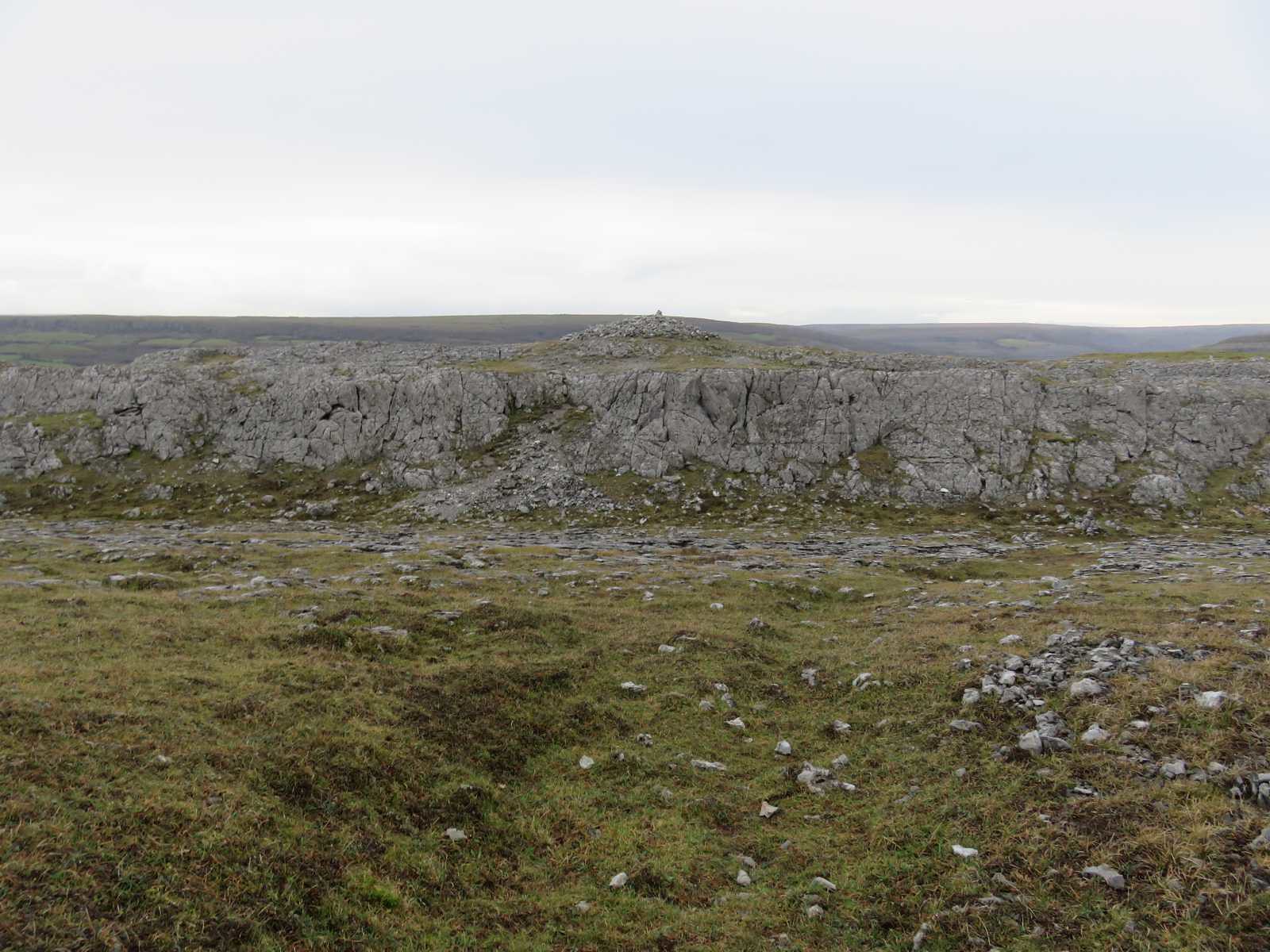 Looking west, it is an unusual landscape 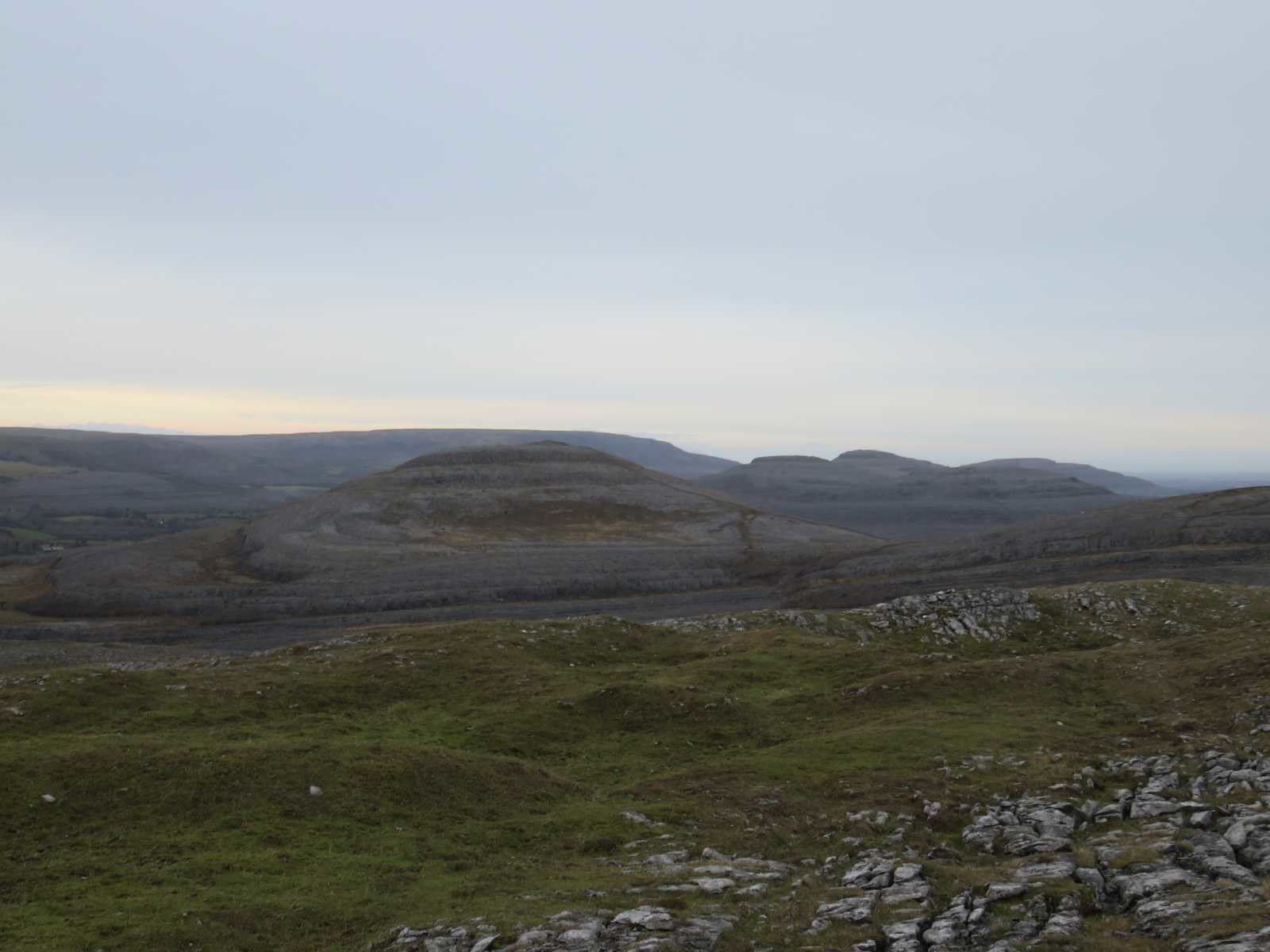 and more Northerly to Slieve Roe and Knockanes 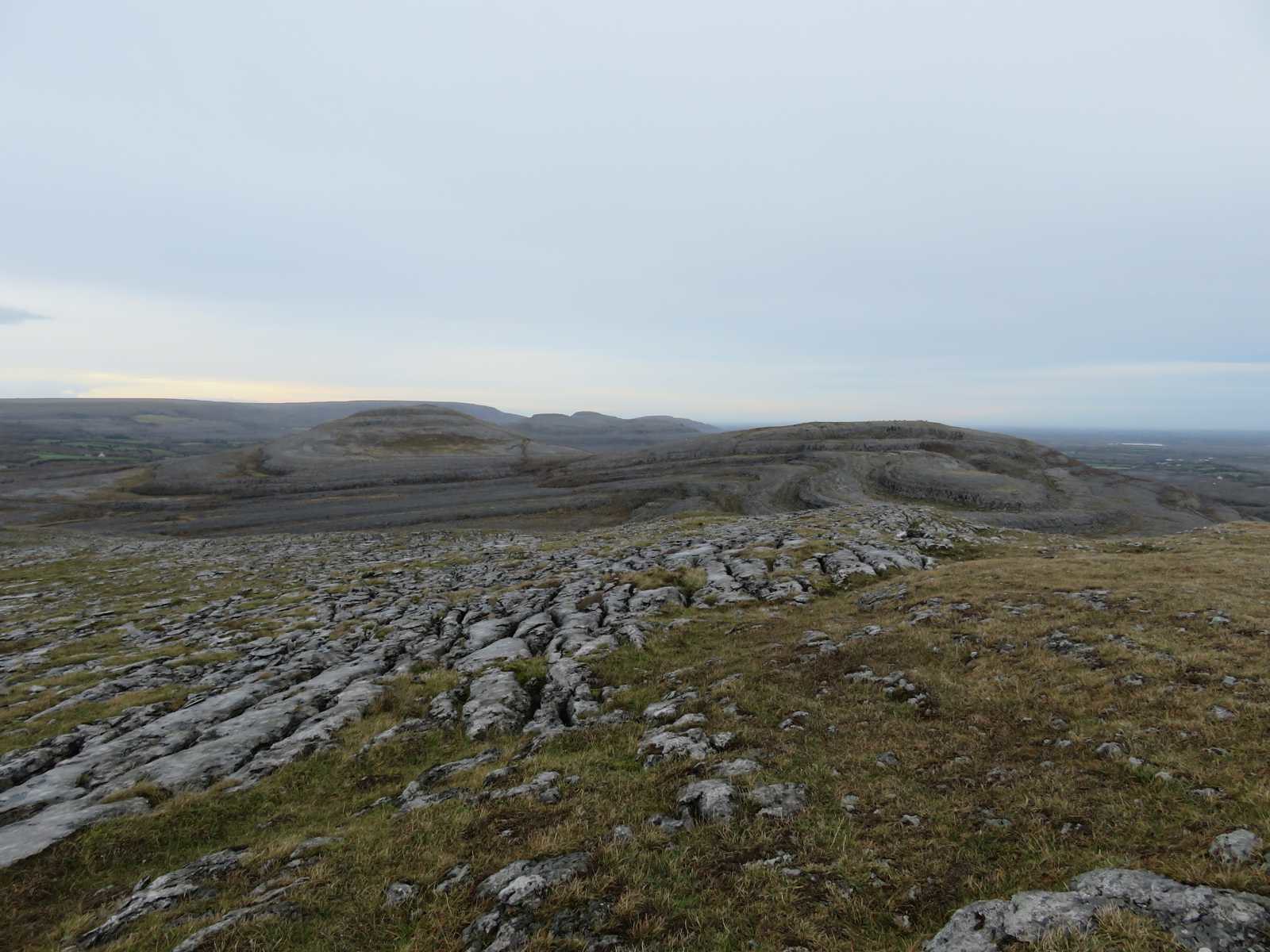 The summit cairn looking in the same direction 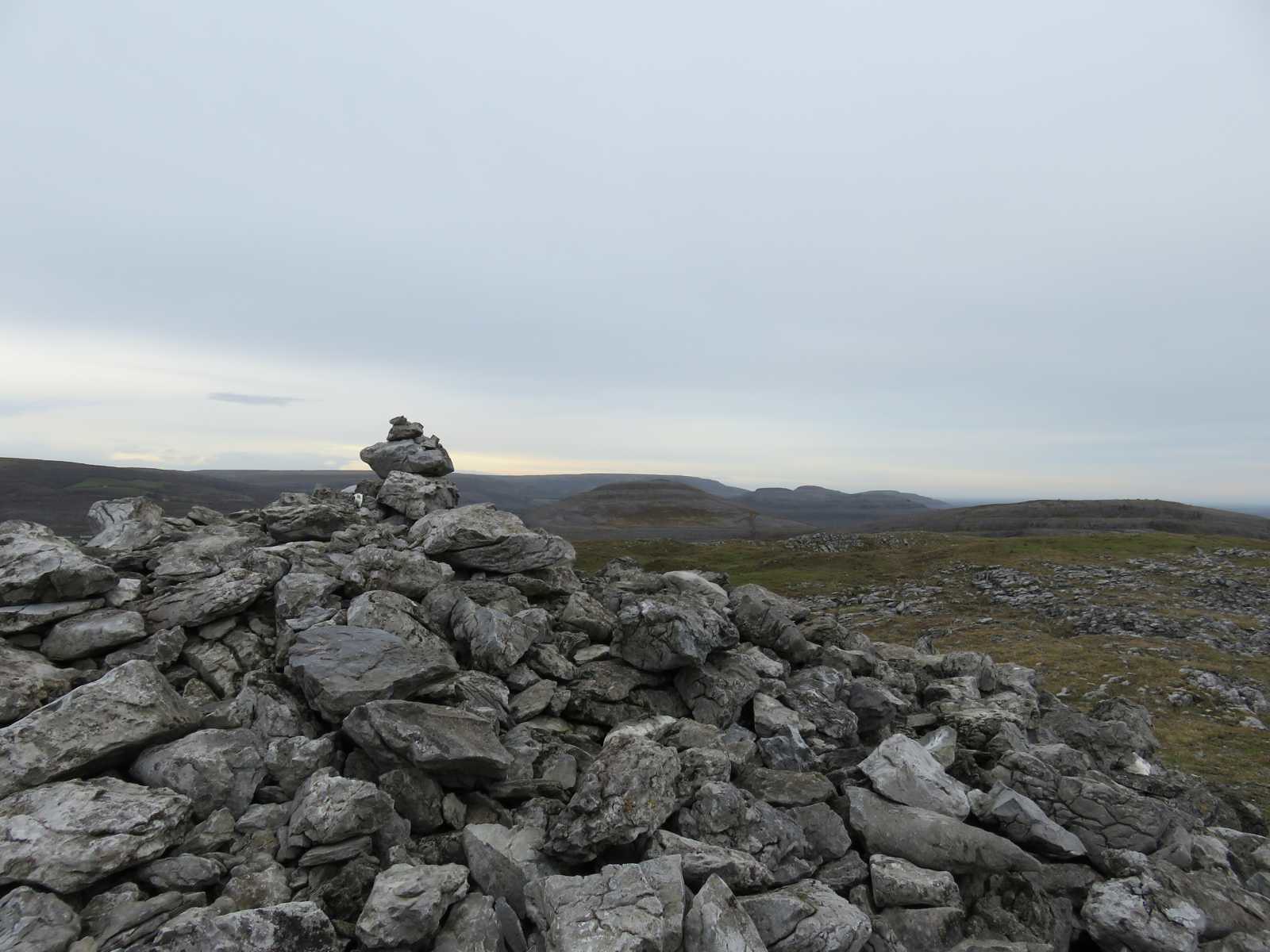 Once at the top there were way markers for green, blue and red tracks and the paths were well trodden 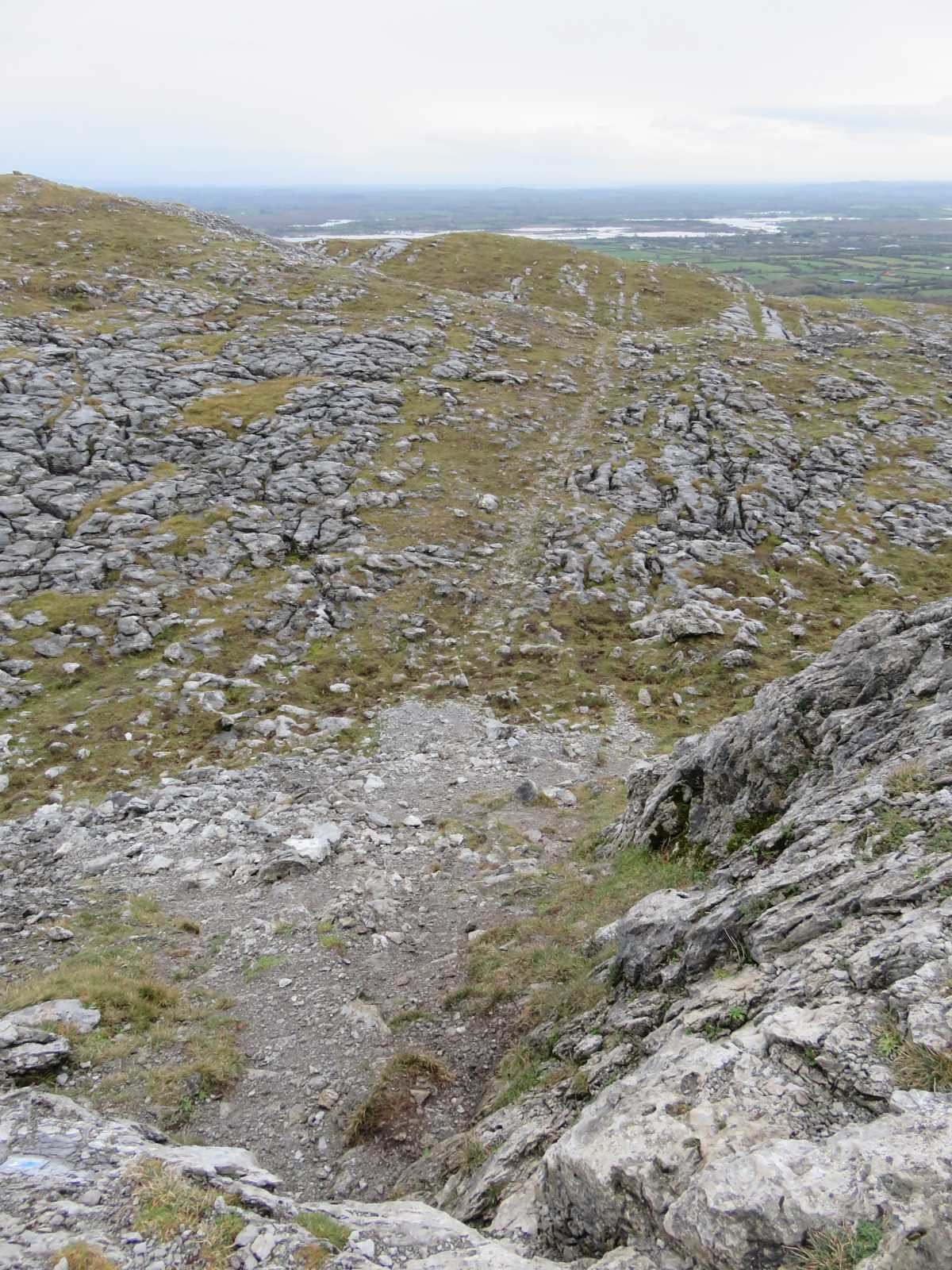 I was a little concerned about the light and didn't have my head torch with me, so the easy going was appreciated 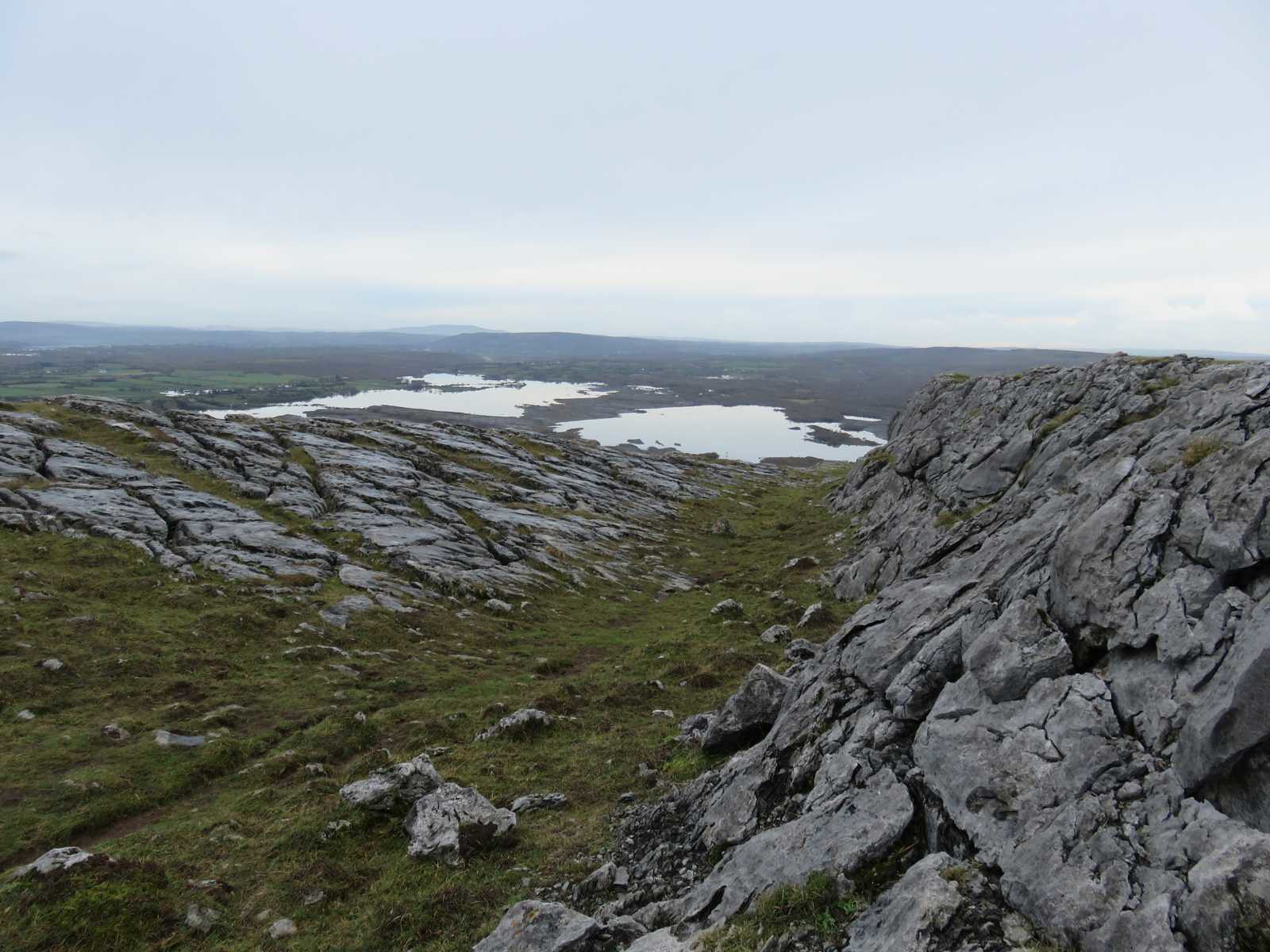 A look back up to the summit dome 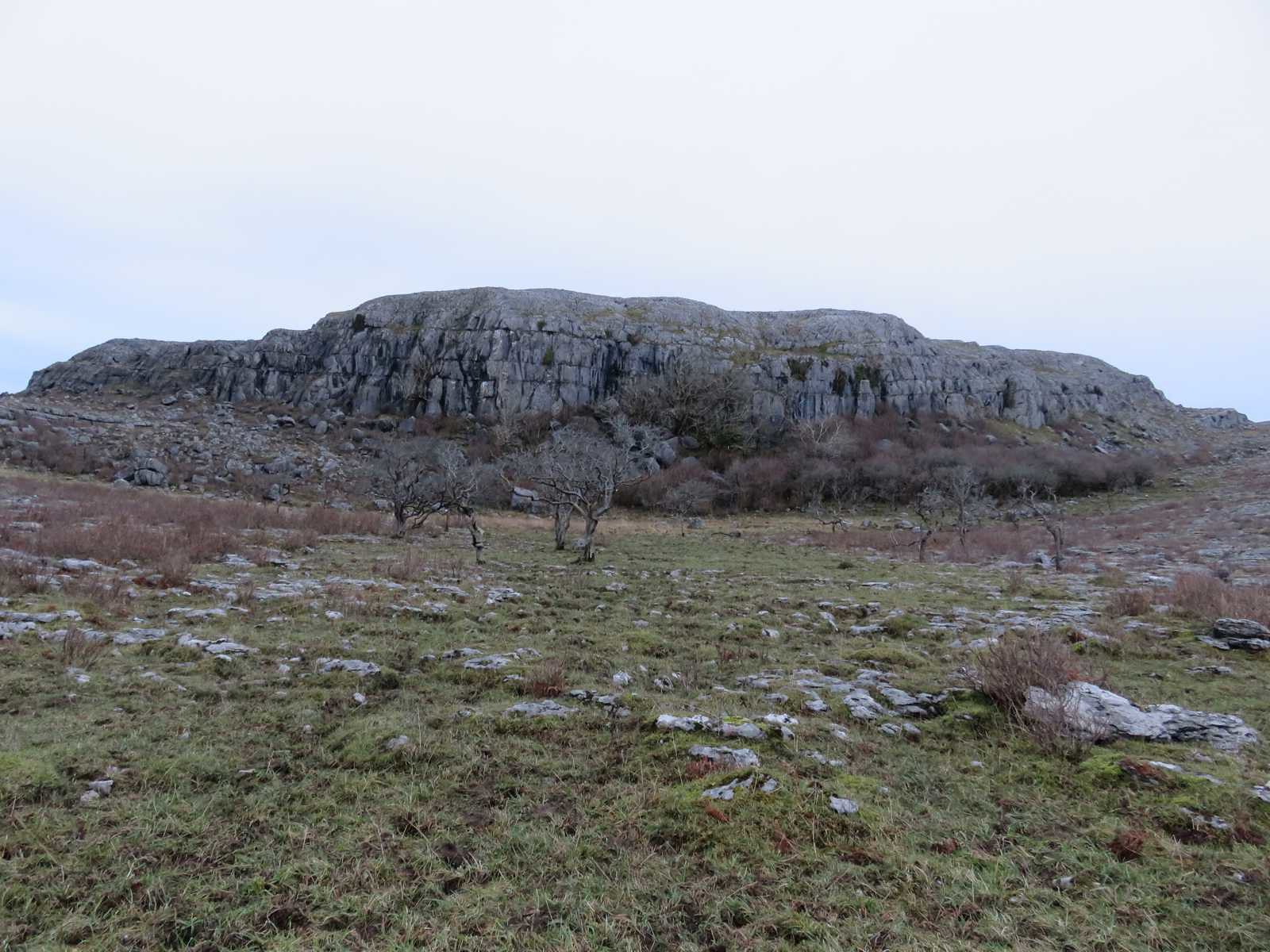 Next stage was to find my way done to the next level, no real issue, just a bit to the North and around and down, below a herd of goats grazed 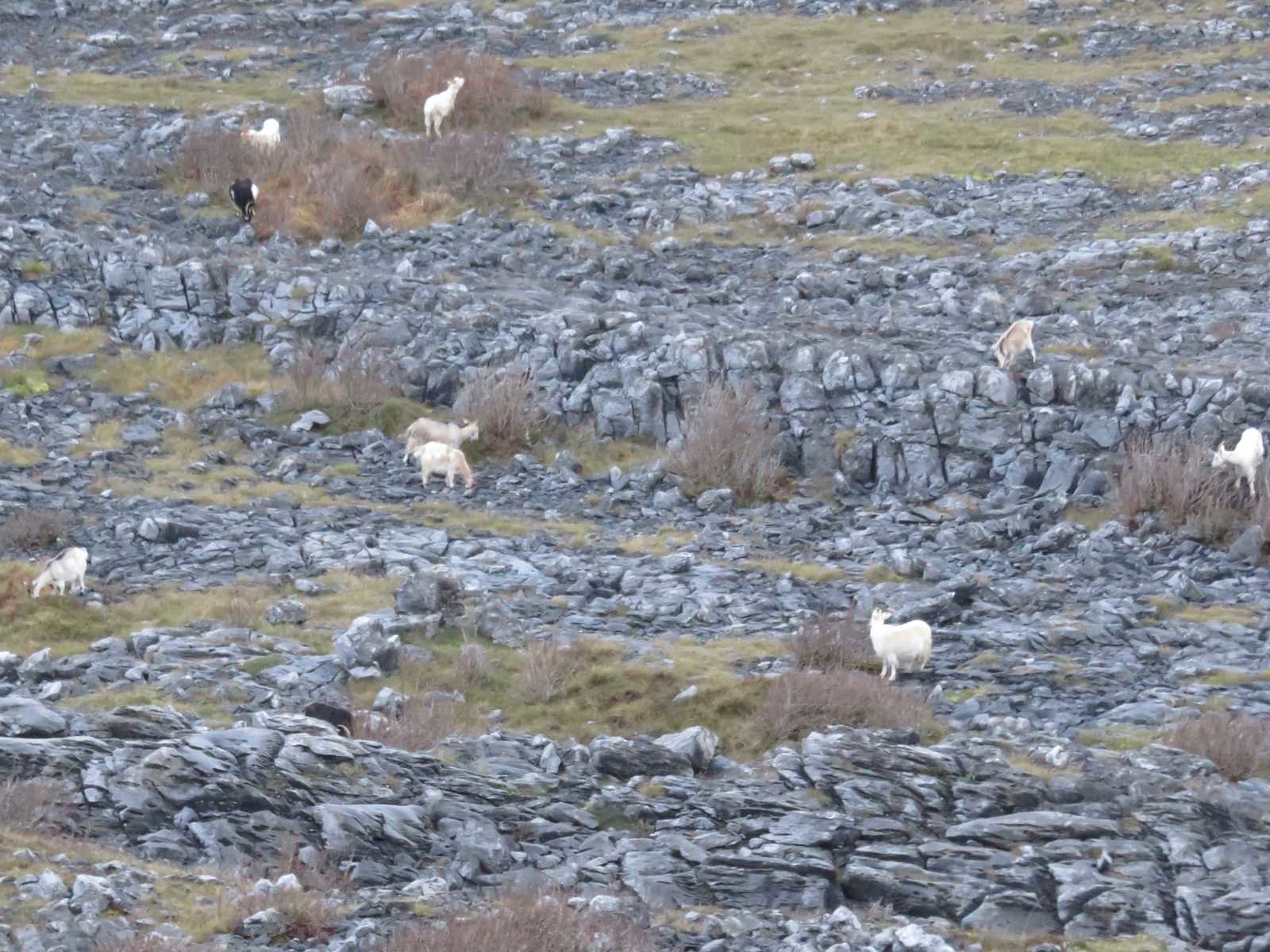 The Burren is saturated with Hazel trees. When I first arrived I went and picked the wild hazel nuts with my sister, they were small, but actually very tasty lightly fried in butter and salt. 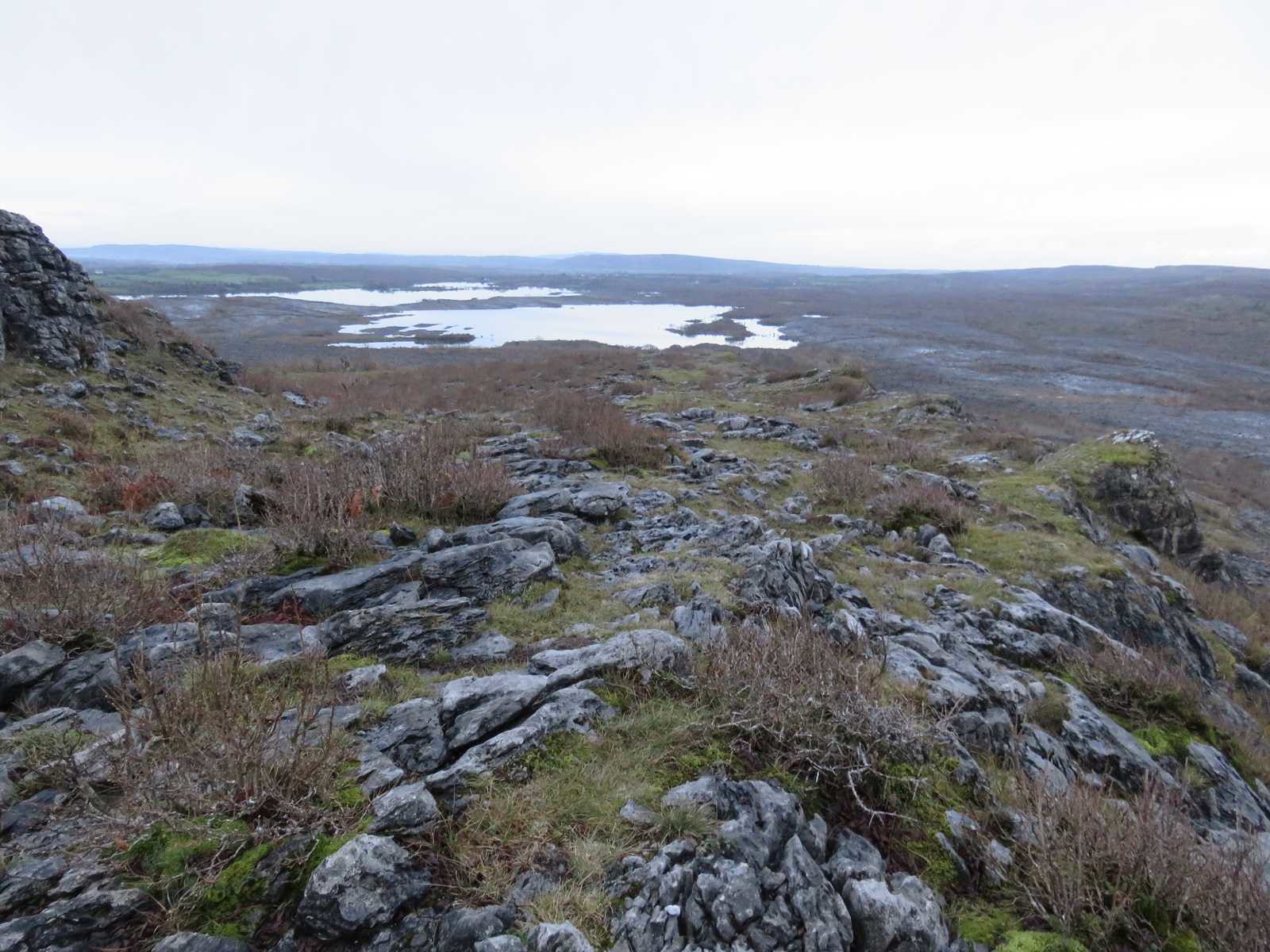 and around the ledge. I thought I may have to double back as it first broadened and then narrowed against the cliffs above and below 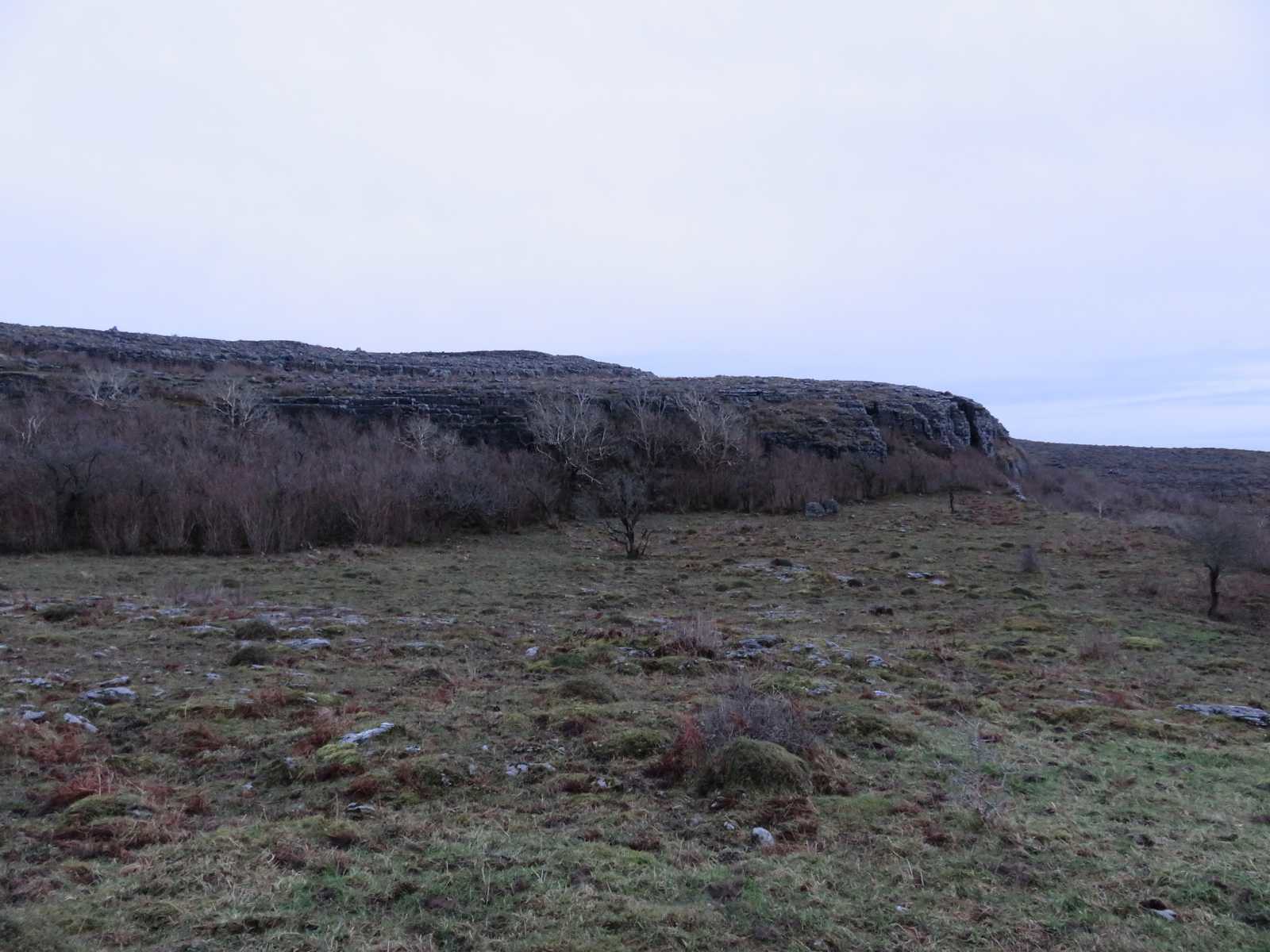 but there was an easy traverse path down 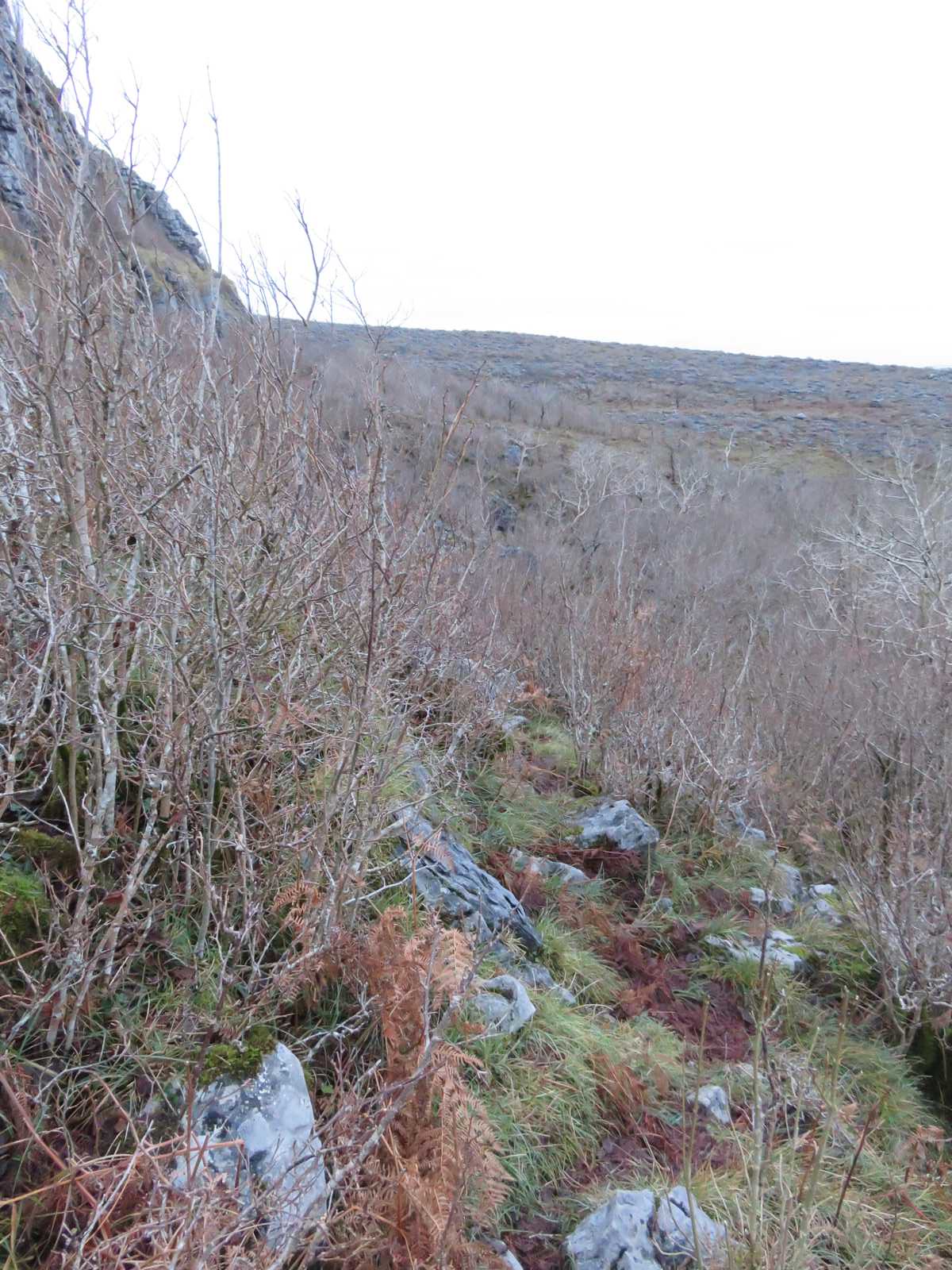 and through a velvet floored Hazel forest 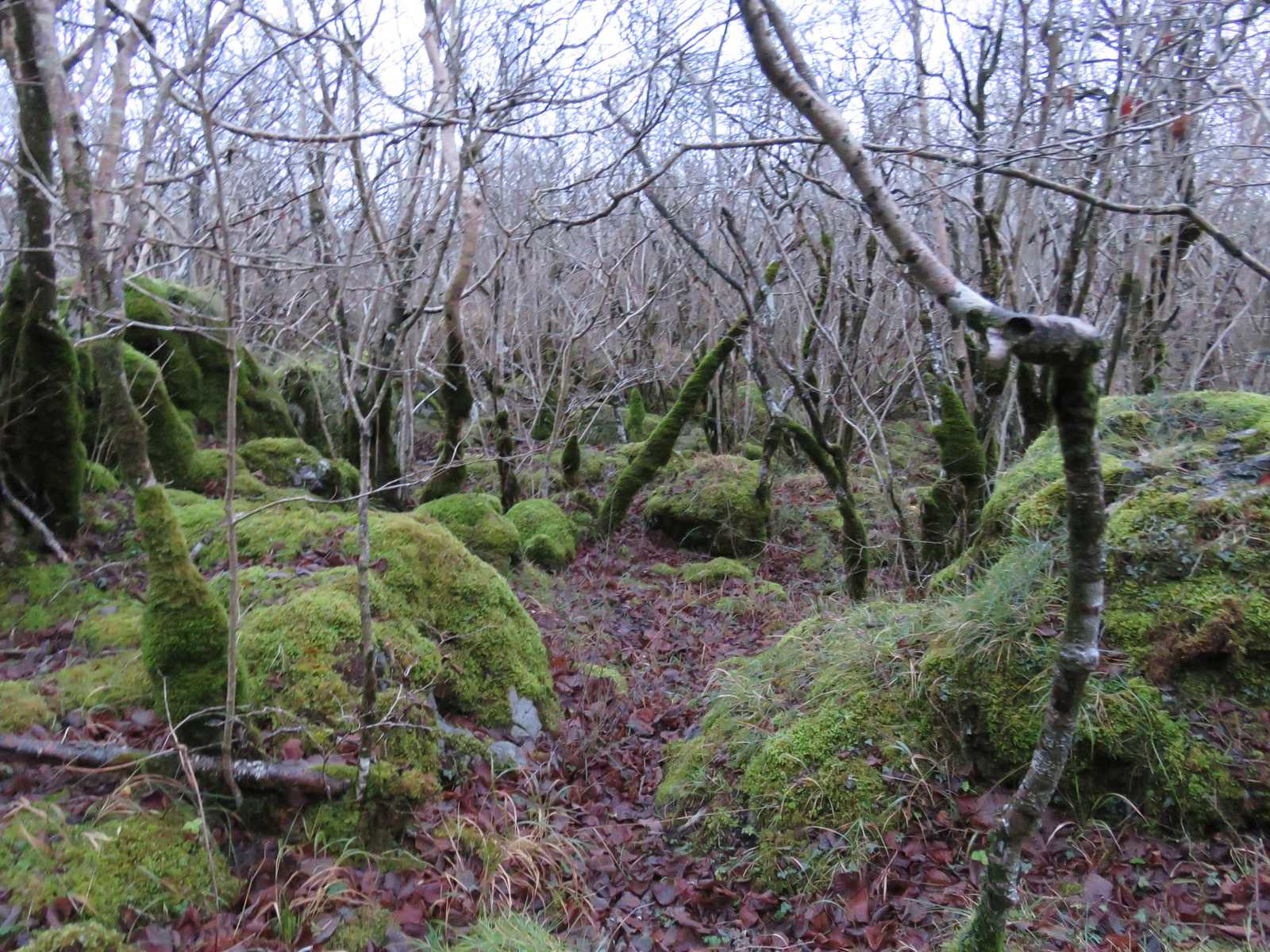 Guess the goats haven't gotten round to this bit yet.

Anyway the forrest is short lived and it is back onto a well trodden path which I knew would be the other side of the path that entered the Lough on the other side, it's well way marked 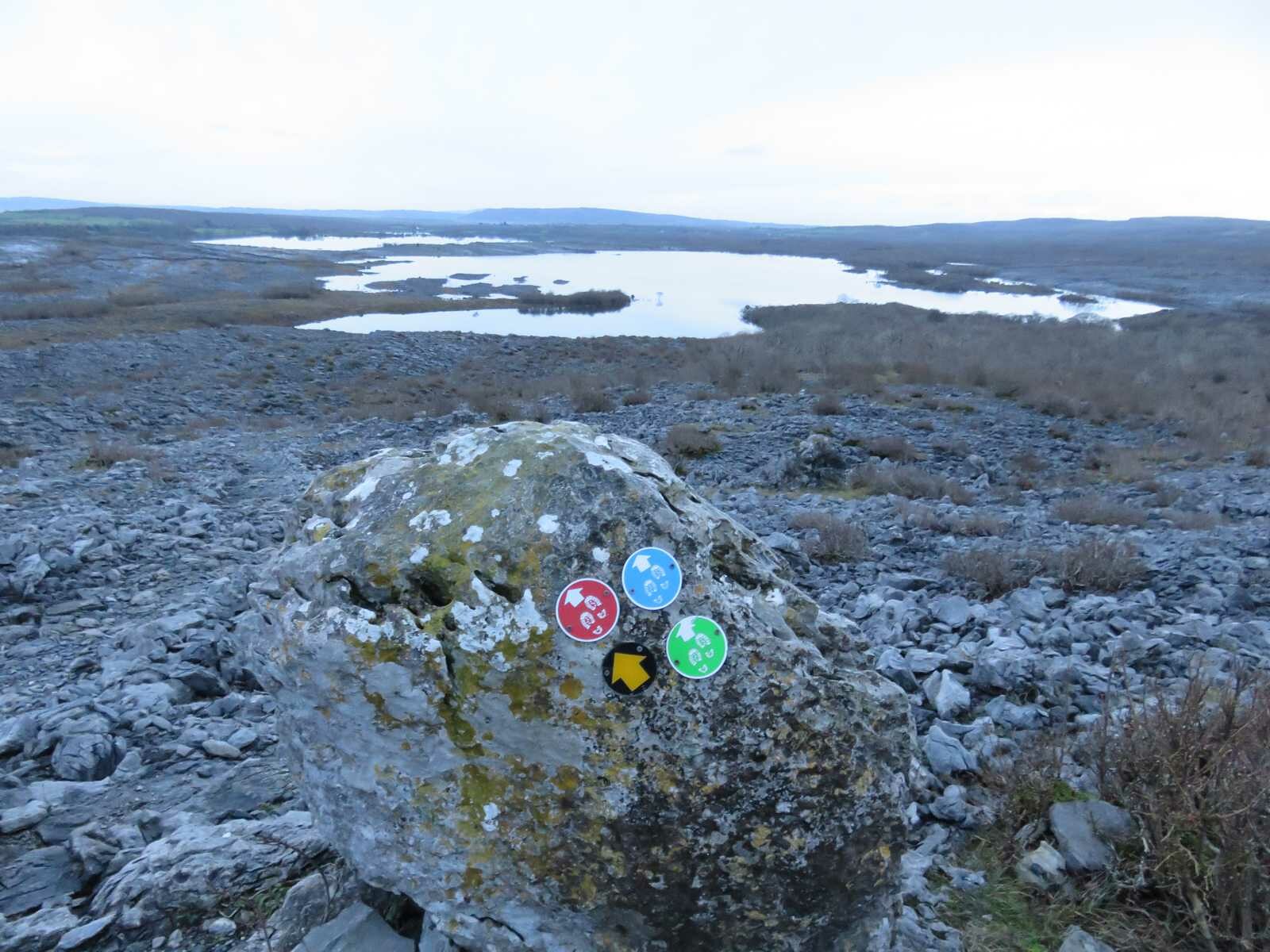 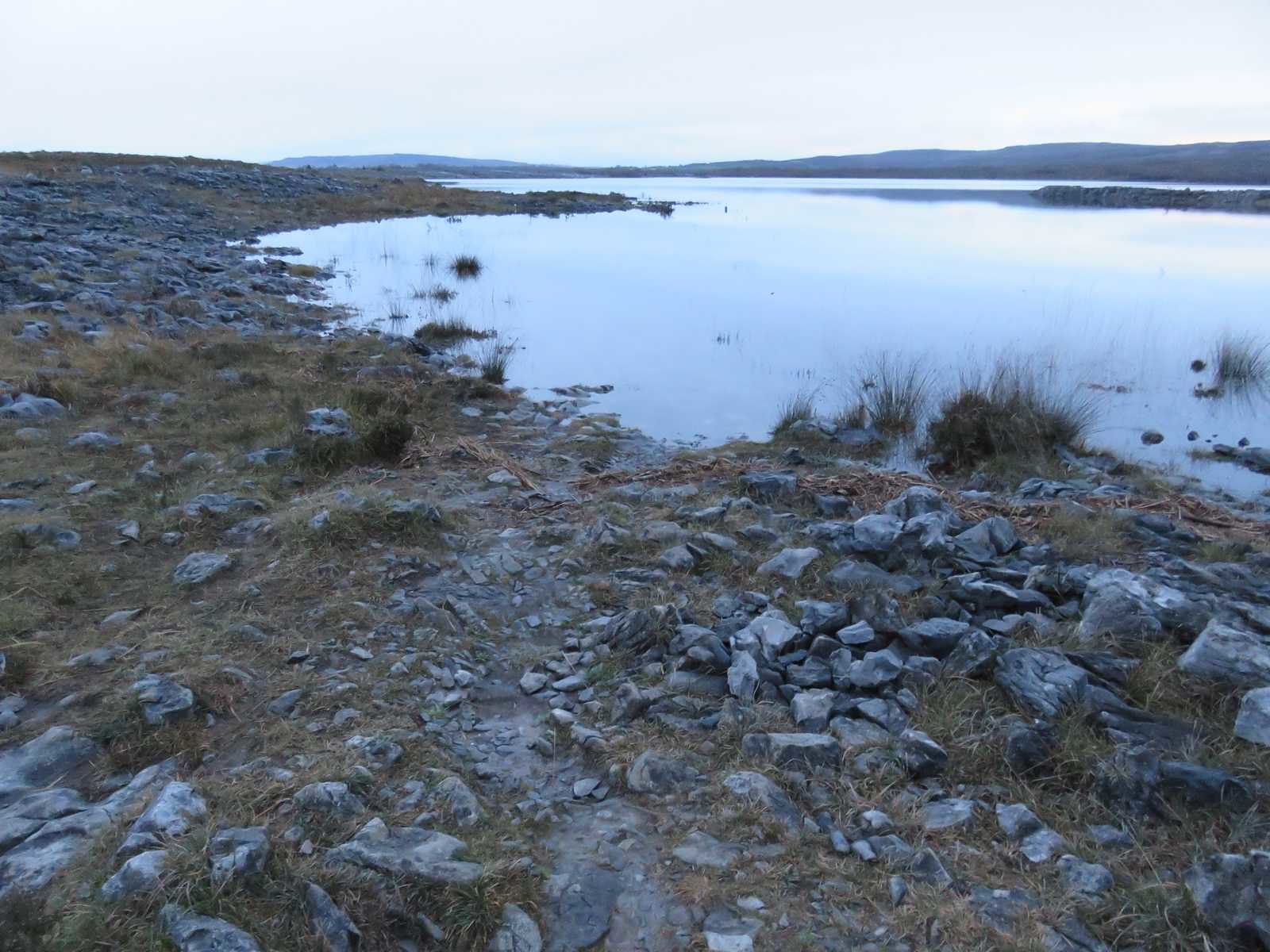 Guess in hindsight I could have walked around the shoreline, but there was also a path going up to the left at this point, so took that.
Shortly afterwards intersecting the first wall I'd encountered on the way up 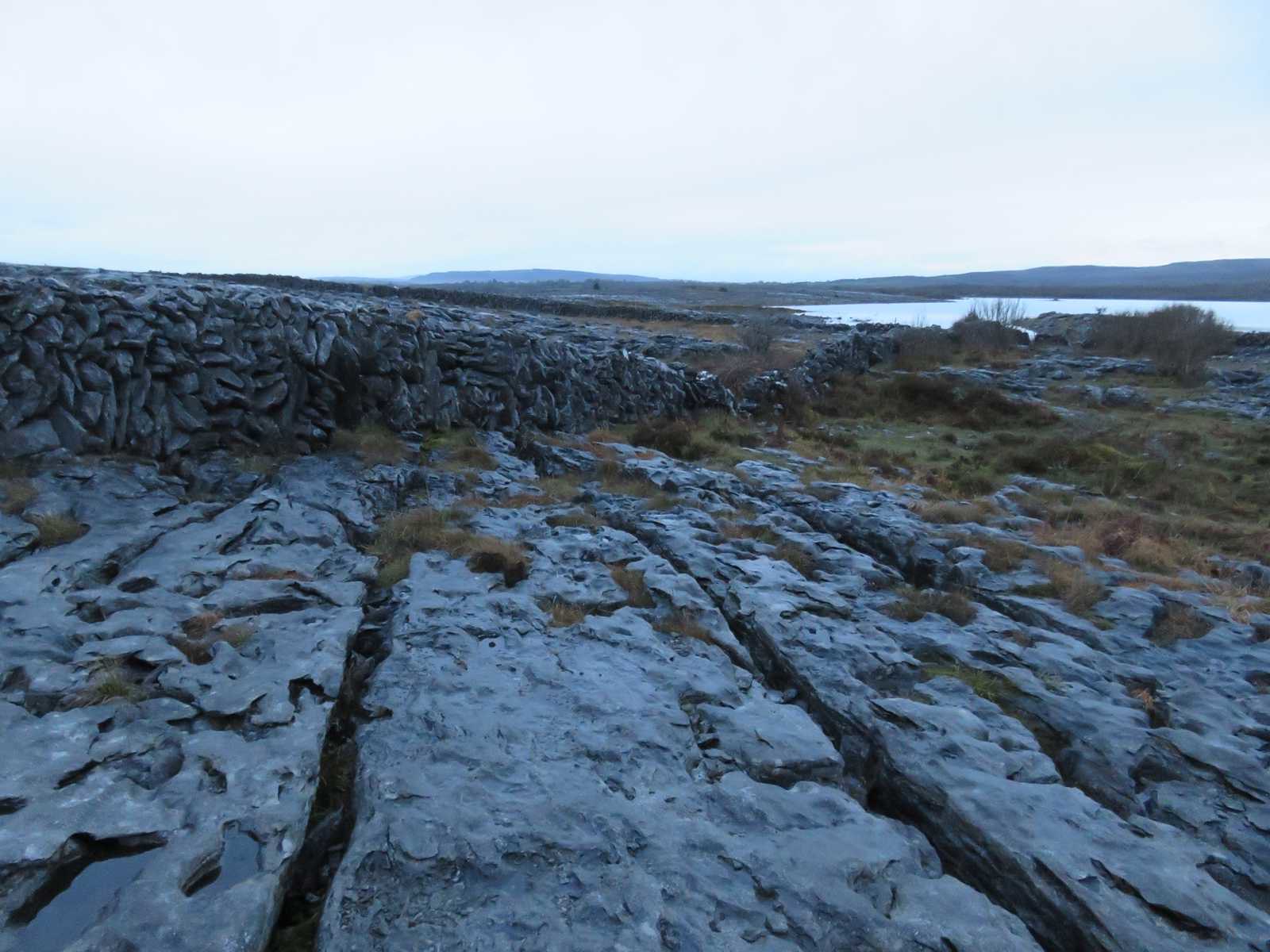 What an intriguing landscape Ancancha, with widespread areas of 'ankle-snappers' too

. I was supposed to go to The Burren for an orienteering event about 20 years ago, but never did for some reason. The name hadn't crossed my mind since then, so nice to finally see some photos. Those hills look way higher than 150 - 200m.

Cheers Chris
Some great tame scrambling to be had up there and the surrounding tops, hopefully I will get another one this weekend in sunnier weather

. I was supposed to go to The Burren for an orienteering event about 20 years ago, but never did for some reason. The name hadn't crossed my mind since then, so nice to finally see some photos. Those hills look way higher than 150 - 200m.

When I started out towards the top I would have agreed with you about the height Malky, but Viewranger GPS says I started at 30m and highest was 175m, there were no way point skips as viewranger is apt to do, especially if you are moving fast ( on a bike or skis ) so I guess it is accurate.

I went to the top of Slieve Elva not long after I arrived; it is 398m, the highest in the area, but not worth bothering about !
Drove almost to the top and the walk from where I parked the car to the summit was over an actively worked peat bog and the summit cairn was just a trig point in a marsh

Hpefully I will get up on a more blue sky day and get some decent photos...

Hi Craig, nice to see you keeping the outdoor even outside Scotland

Petr Dakota wrote:Hi Craig, nice to see you keeping the outdoor even outside Scotland

Petr Dakota wrote:Hi Craig, nice to see you keeping the outdoor even outside Scotland