Grassington moor and conistone pie.gpx Open full screen  NB: Walkhighlands is not responsible for the accuracy of gpx files in users posts
We have been rather boring for a long time and stuck to going up Roseberry Topping but decided that if we could not get to Scotland this weekend we would just go for a good walk in the Dales and visit some interesting places. So having dropped of Coldwetandhungry for her DofE gold practice expedition we set off for Grassington where we parked in the National Park car park (£4.50 for the whole day and 20p to use the toilet).
Following the Dales Way we walked up through the village and out into farmland. It was a bit interesting map-wise as my paper map pre-dates CRoW access land and a few paths have been diverted a bit since then, but Rudolph had a nice modern print-out from Quo so we did fine. Leaving Grassington we followed the Dales Way northwards through limestone pavements with some really gnarled trees, to reach Conistone Pie, an interesting limestone formation that I may well have been to when I was small but could not remember. From there there excellent views up and down Wharfedale and over to Kilnsey Crag, but they did not come out very well as some weather and haze appeared. Looking back towards grassington with Cracoe Fell behind Bit of weather on the way Looking up Wharfedale from Conistone Pie Rudolph protecting his mug after I knocked his coffee over and we had to start again. Looking up Littondale from Conistone Pie. There were hangliders out but I don't think they are visible in the photo We stopped on Conistone Pie for lunch and then set off across the moor to reach Bycliffe Road which took us over the moor to Mossdale Scar. This was a fantastic spot where the large Mossdale Beck disappears under the foot of the cliff. There is a large cave system underneath where six cavers died in a disaster back in the 1960s when they were cut off by heavy rain filling the system, and the cave was subsequently closed on order of the coroner. It is said that the water comes back to the surface again at Black Keld, just south of Kettlewell, which is surprising. Dewpond on the moor. There are no streams in this area because the limestone underneath is porous, so dewponds were made for animals to drink. This one has got a bit grotty 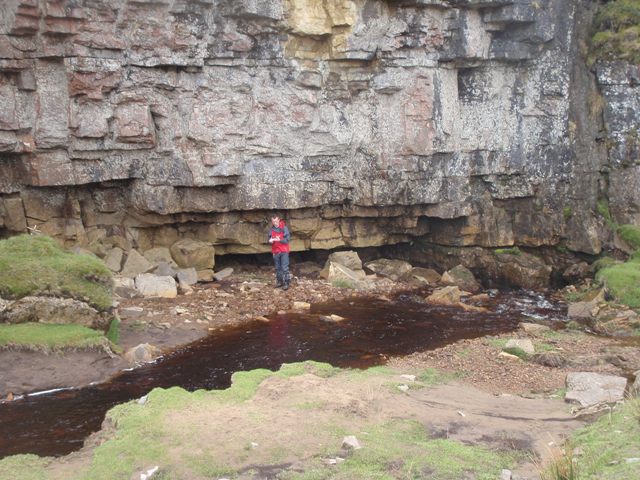 Mossdale Beck disappearing under the Scar

From Mossdale Scar we headed straight uphill to find a ring contour which Rudolph had to find on our ML assessment, and also found a couple of nice large sink holes which are marked on the map. From then we came downhill to the track and followed it all the way back across Grassington Moor to Yarnbury. This whole area has been extensively mined for lead over the centuries, and there is a lot of evidence of this still remaining with some information boards for those who are interested. Near Yarnbury there is a Henge marked on the map so we went to take a look at this. It did not photograph well but consists of a circular mound with a ditch and bank round it. We sacrificed some nuts and raisins and filled our tummies before setting off again over the moor in the direction of Hebden, then swinging round to the west to descend past Garnshaw House to join the Dales Way again at the stepping stones leading to Linton Church. A bit too much water in the Wharfe today to make the stepping stones negotiable, so we continued up the East bank of the river to Linton Falls, where a footbridge provides an excellent view of the falls, and thence back to the car park. Linton Falls and Weir looking upstream from the bridge

Thanks for sharing more of my wonderful home county Mrs S, you have some great shots in this one and it's another good distance too...I find myself envious and yearning for a long drag across the dales , lovely stuff

Thanks Chris, this was my home territory when I were a lass, I was born and brought up in Skipton.

Lovely to see these piccies and hear these place names again