DON'T DO THIS WITHOUT A GUIDE!

Morecambe Bay is full of constantly shifting quicksand, deep water channels and unpredictable tides. You can see from the GPS track how far off the bee line we were taken.

We did a guided walk run by Cedric Robinson, the official guide. These are normally charity fund-raisers and you pay about £5. They go most weekends during the summer and you can usually get details from tourist information in Grange or Morecambe.

Around 150 people and assorted dogs assembled on the Promenade at Arnside. We followed the shoreline under small limestone cliffs and through a wooded caravan park to a rocky bay. At the signal, we headed out onto the sands. Grey cloud and sunny patches on the great expanse of wet sand produced a lustrous silvery reflective surface. Wide views to Lancaster and the Forest of Bowland, back to the Fells and across to Furness and Black Combe were all around. Perplexingly Cedric headed away from the destination of Kents Bank. We seemed to be making a bee-line for the distant blocks of the power stations at Heysham, right towards the centre of the Bay and a very long way from help if the tide came in.

Underfoot was hard wet ribbed sand. Footwear is an awkward choice. For my money old trainers are best. Walking sandals tend to rub nastily in the salt water whilst the rocky approach at Arnside rules out going barefoot. 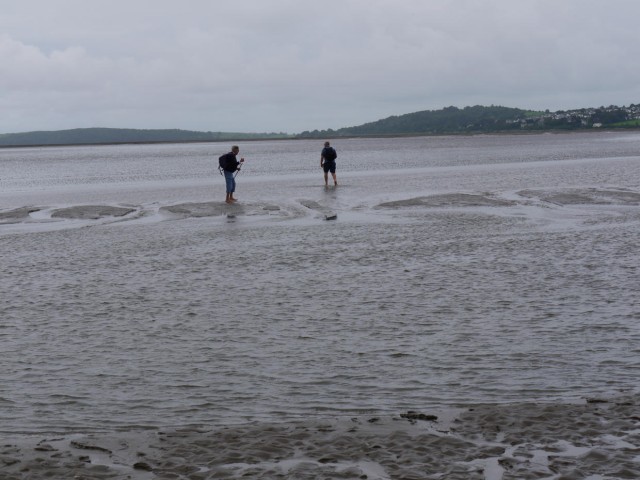 Eventually the reason for the detour became clear. We came to the River Kent channel. At least 100m wide, thigh deep in the middle and fast flowing. This was the highest upstream that we could safely ford it. We all assembled on a sandbank whilst Cedric and his assistant walked up and down the channel prodding and probing. Eventually dogs were rounded up and put on leads, small children were hoisted onto shoulders, a whistle was blown and the crossing of the red sea began. Five minutes of strenuous wading and it was done.

At last we changed course, turned our backs on Humphrey Head and headed for Hest Bank. Gradually the sand gave way to a vast expanse of samphire which made for a tasty nibble, then saltings with grazing sheep (salt fed lamb is a delicacy) and eventually Hest Bank Station.

We'd dropped a car at Hest Bank the night before. You can get the train back of course although there can be 3-400 people doing the walk and the train can be two (or if you're really unlucky one) carriages. A better ploy is to park up on the far side and get the train to the beginning.

All in all one of the most unusual walking experiences you'll ever have, even if, like me. you're allergic to walking in big groups.

Interesting walk. I believe something similar used to happen at the Lafan Sands between Llanfairfechan and Anglesey - the Holyhead to London stagecoach used to cross there. Possibly before there were any bridges to Anglesey.

Another piece of trivia from this area, apparently Arnside Knott is the smallest Marilyn.