Bryant Lake sits at the base of Mt Bryant in the Fisher Range, Kananaskis. Access is via the dry bed of Canyon Creek on the Powderface Trail. To reach the trailhead take highway 66 from its junction with Highway 22 just south of Bragg Creek and follow 66 to its end 28km west. At the end of the route continue straight onto the gravel logging road, this is the Powderface Trail. Follow Powderface for 15km to Canyon Creek, parking is on the east side of the road before the bridge.

Views to the west from the car park show Mount Bryant just peeking above the trees on the left and the leading pair of 4 unnamed peaks (above the truck). I still find it incredible that there are so many unnamed peaks around here but I guess that is because I come from a small country where everything has at least one name. I think I'll come back here and climb a couple of these and give them a name of my own. 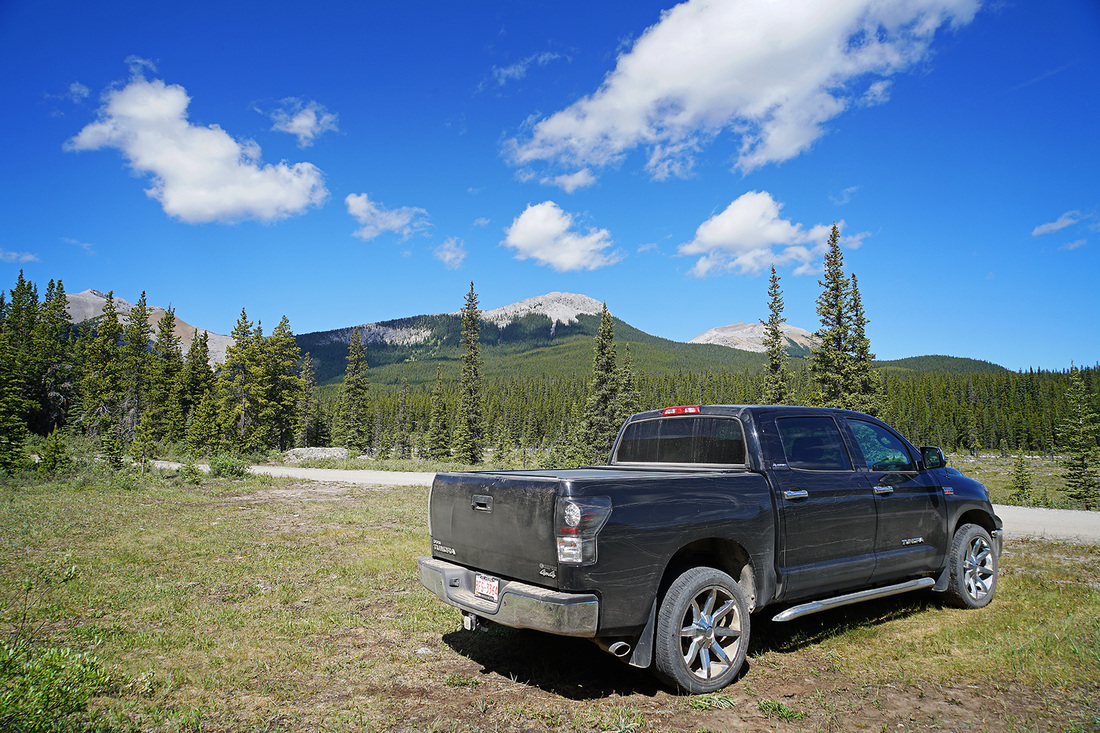 Directly across from the parking area is a 'No Motorized Vehicles' sign, this is as good a place as any to drop down into the mainly dry bed of Canyon Creek.

The creek bed as been exaggerated by the flooding of 2013 such that the creek itself looks a little lost in the wide expanse of river rock laid bare by the flow of water that closed the Powderface Trail for over 3 years. 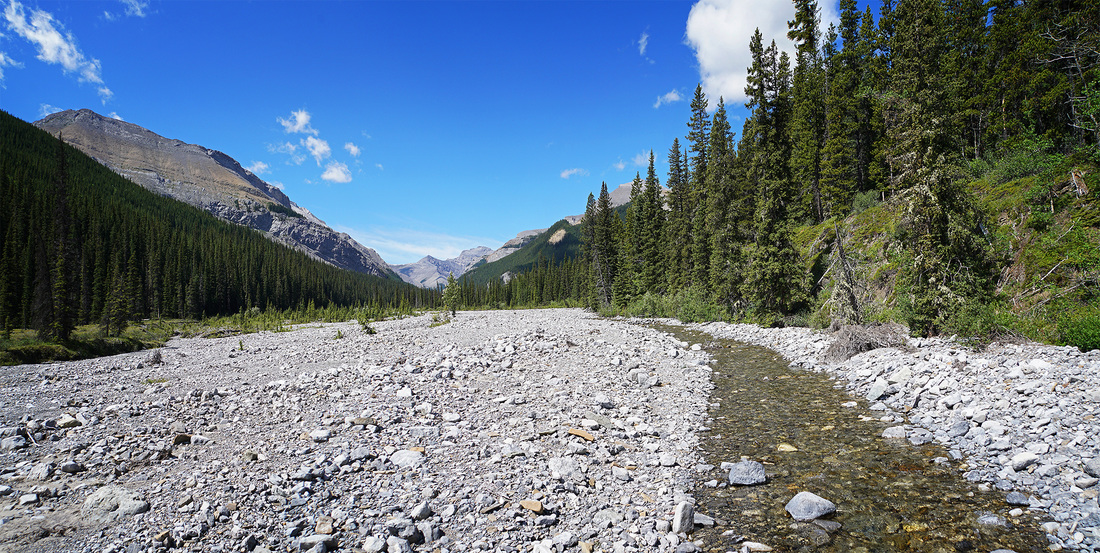 Canyon Creek meanders from side to side up the wide flat valley, to the left is Compression Ridge and to the right Mt Bryant. Directly ahead the Fisher Range fills the horizon with peaks to complete the picture. 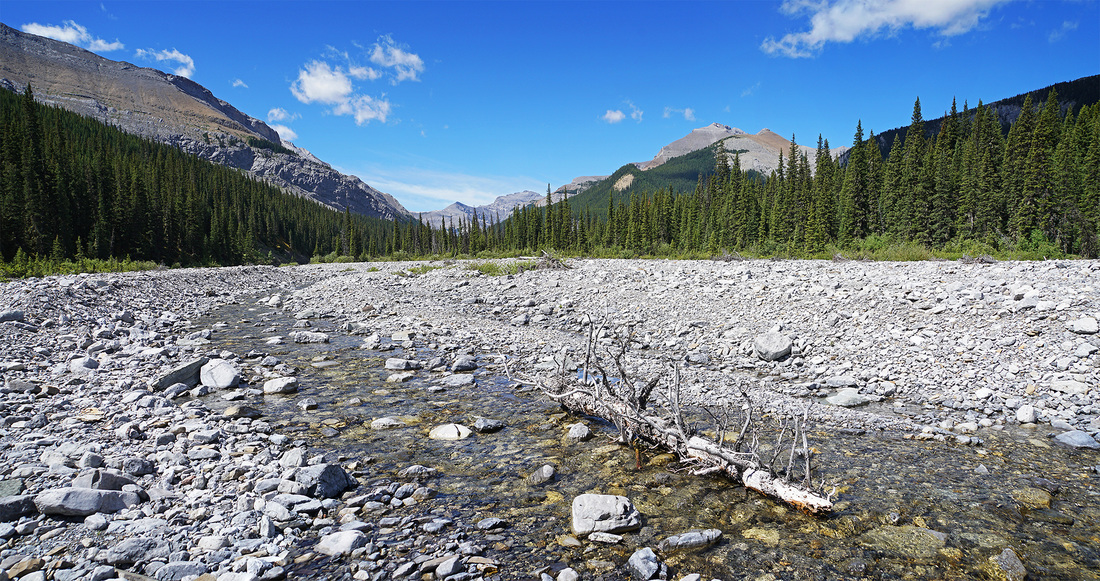 Most of the trail to this point has been wiped out by the floods but occasional bits remain here and there and there is great value in finding these bits and using them. This does mean crossing back and forth frequently but it is worth it to save your feet from rock hammer for the whole day. At the base of Mt Bryant the north fork of the creek joins the main body where a yellow Alberta Parks sign still stands in defiance of the flash floods that frequent the area. Turn here and head north along the valley between Mt Bryant and the unnamed peaks. 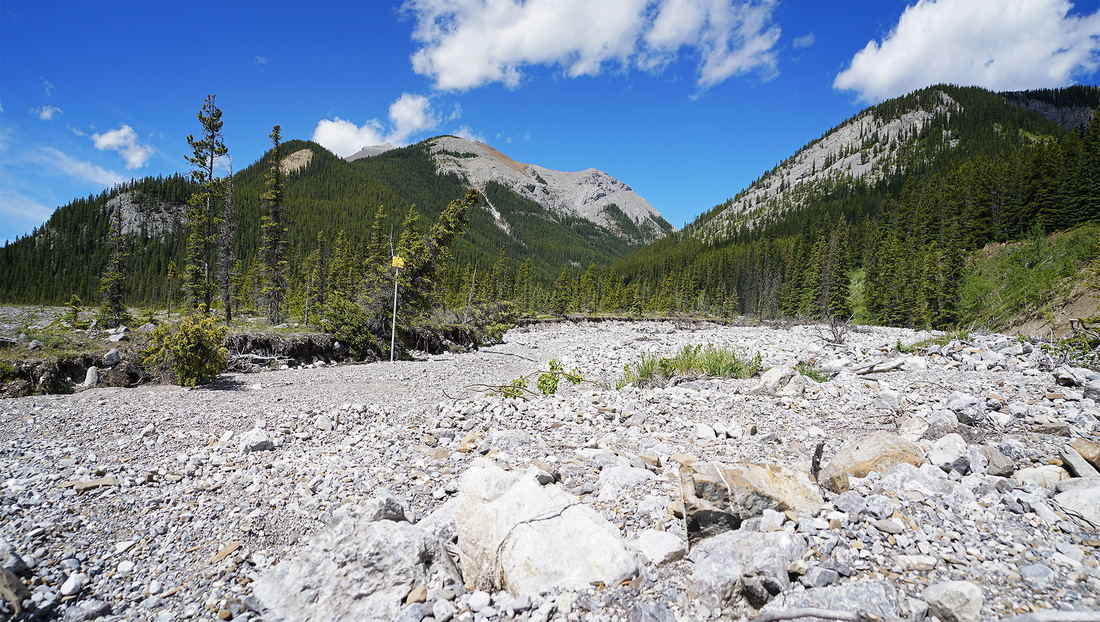 The north fork narrows quickly into a far more interesting boulder strewn canyon, again the trail is badly damaged by flooding and only exists in scattered pieces but seeking them out is strongly advised, 10+ miles of rock hopping gives the ankles more of a workout than they really want. 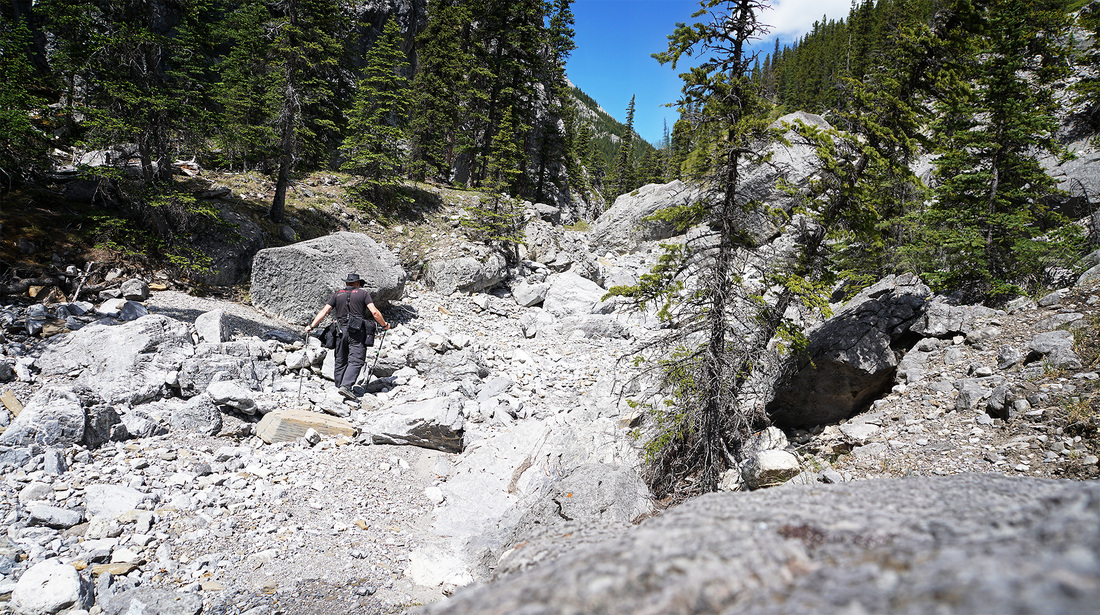 In some areas the tight confines of the north fork capture sunlight and fire it back at you from all angles, it was already hot today but I swear it was 10 degrees warmer where the walls of the canyon squeezed into the narrows forming its own stone oven. 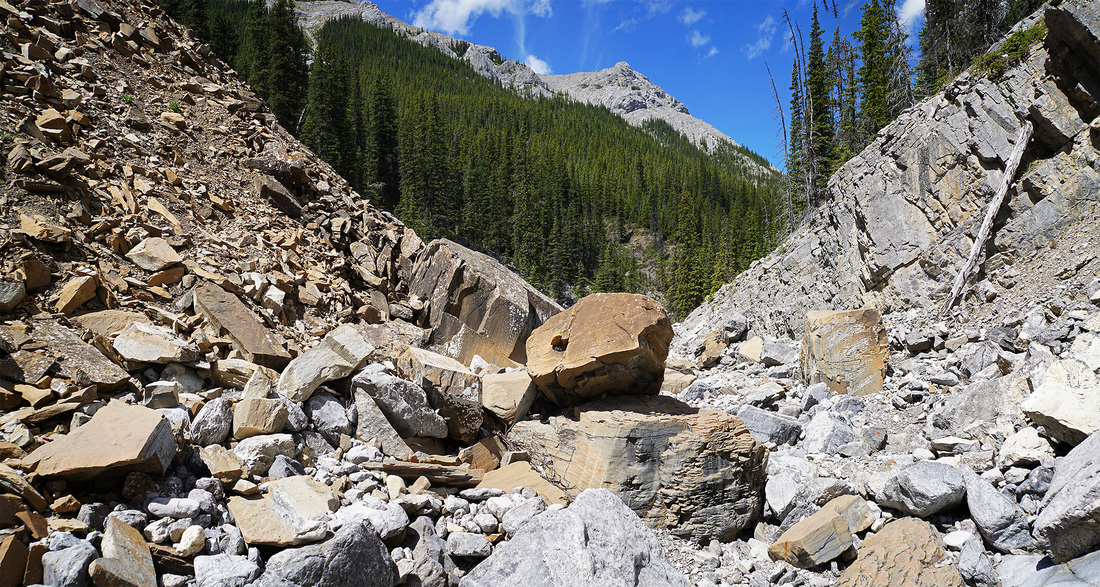 I'm grateful for the widening of the route and some more short trail sections. Looking back as I make my way along the north fork I get a great view of Compression Ridge filling the space behind me. 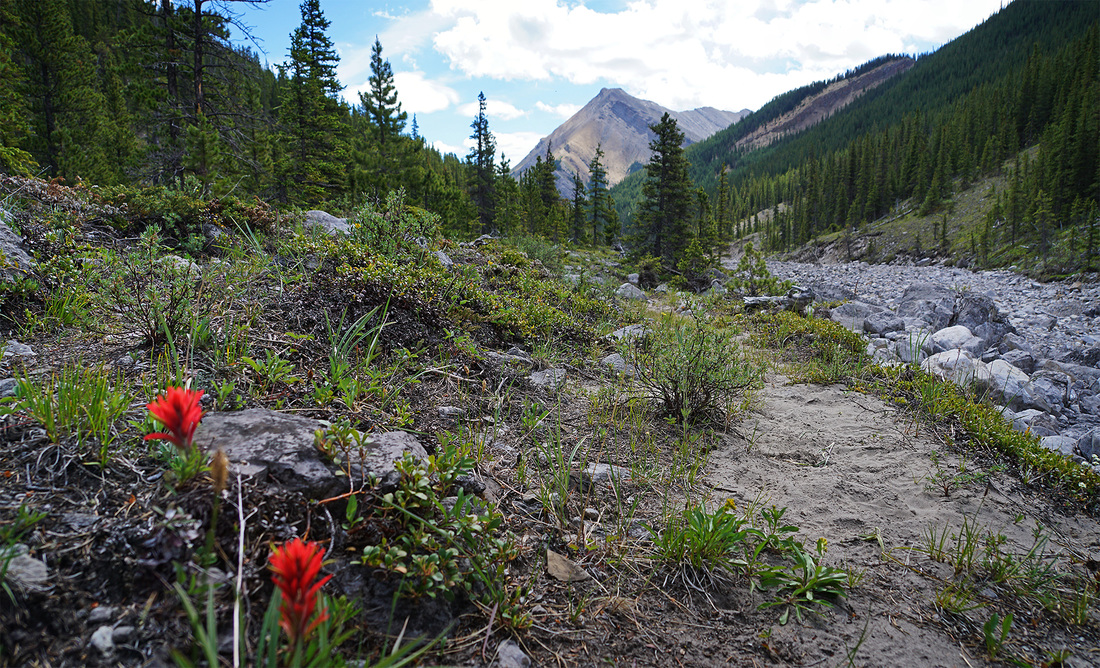 Higher up the north fork splits again, my route is to the left. The narrow right hand drainage leads to two more unnamed peaks, each worth ascending and noted for later

On the way to the trailhead this morning I saw a little black bear scurry across the road in front of me but didn't get the opportunity for a photo, no such trouble with the usual suspects along the rocky creek. 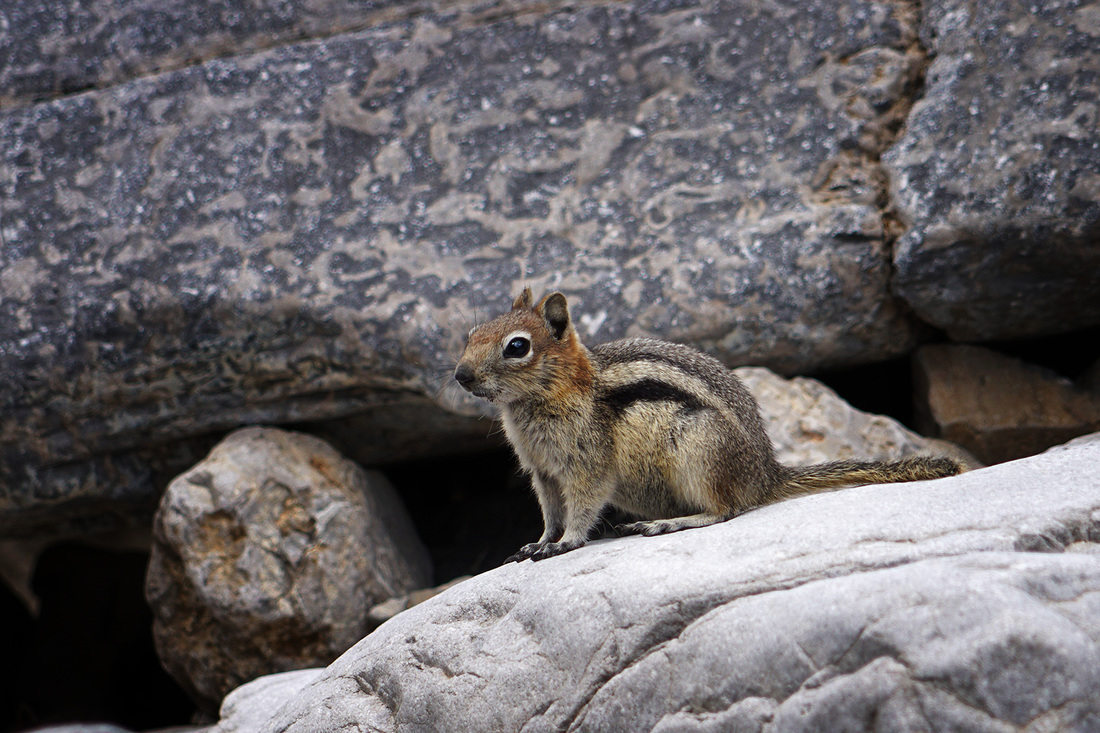 Those looking to make this hike should take note of the next image. Soon after the last fork is a clearly washed out banking with a good pile of tree carcasses lying in the creek bed and above them on the broken slope is a narrow sandy trail which climbs steeply up the bank, this is the route, if you miss this you'll add distance to your already long journey. 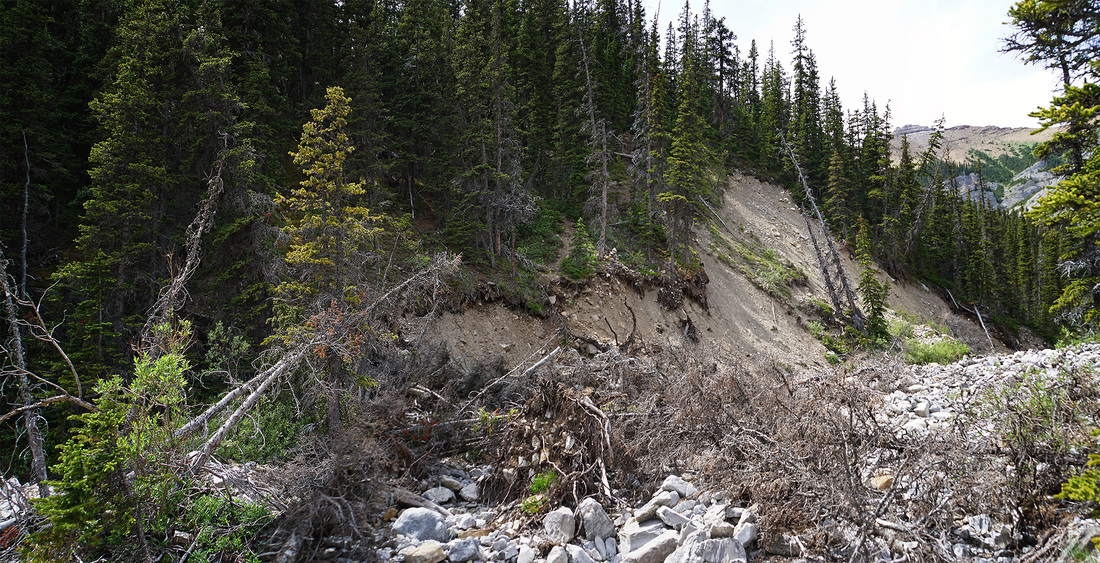 The route up through the forest is very steep but mercifully short, once I break out of the trees I reach a small rock band with an obvious route through. In the distance are those lovely unnamed peaks to the north.

Once above the rock band there follows a nice steady plod across soft high meadows littered with wildflowers. At last there are some views above the treeline and I can finally see the cirque that holds Bryant Lake, though the lake itself is not yet apparent. 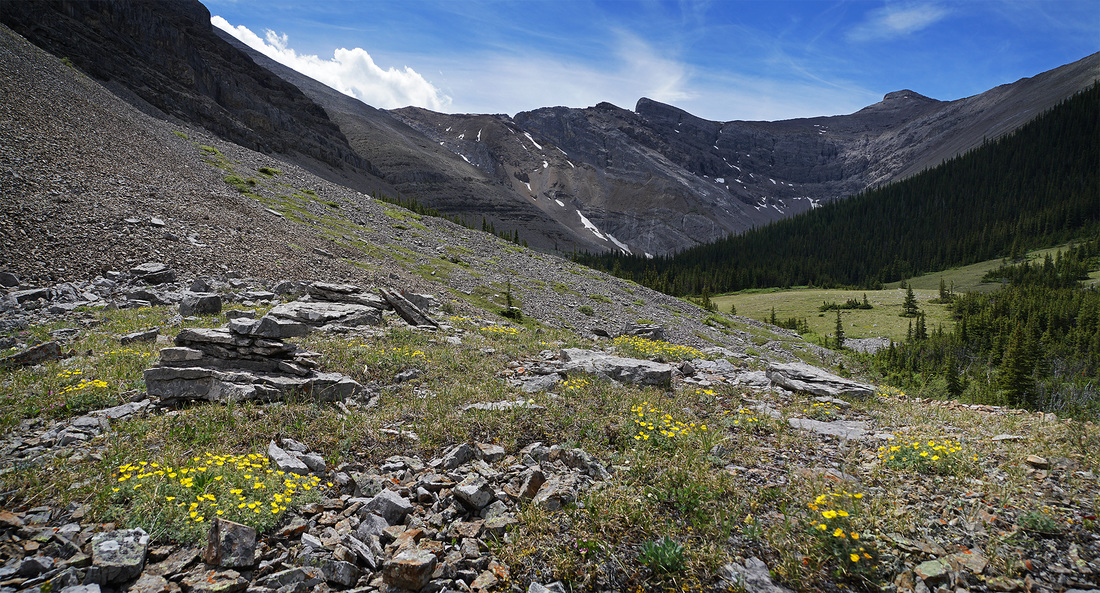 Some of the ascent gained is lost again as a clear trail makes its way down to a high meadow between forested sections. Mt Bryant summit is to the left and its ridges encircle the lake before joining the unnamed peaks to the north.

After dropping down and crossing the meadow, sporadic cairns dotted along the scree show a reascent is required to a high point on the west side of Mt Bryant. The scree is firm and I am soon looking back over the meadow to the unnamed peaks beyond.

Annoyingly, after reascending the scree slope it is a very short hike to a water run off on the west side of Mt Bryant where descent is called for once more. The cirque seems to be moving further away from me and there's still no sign of water though there are still scattered snow patches here. 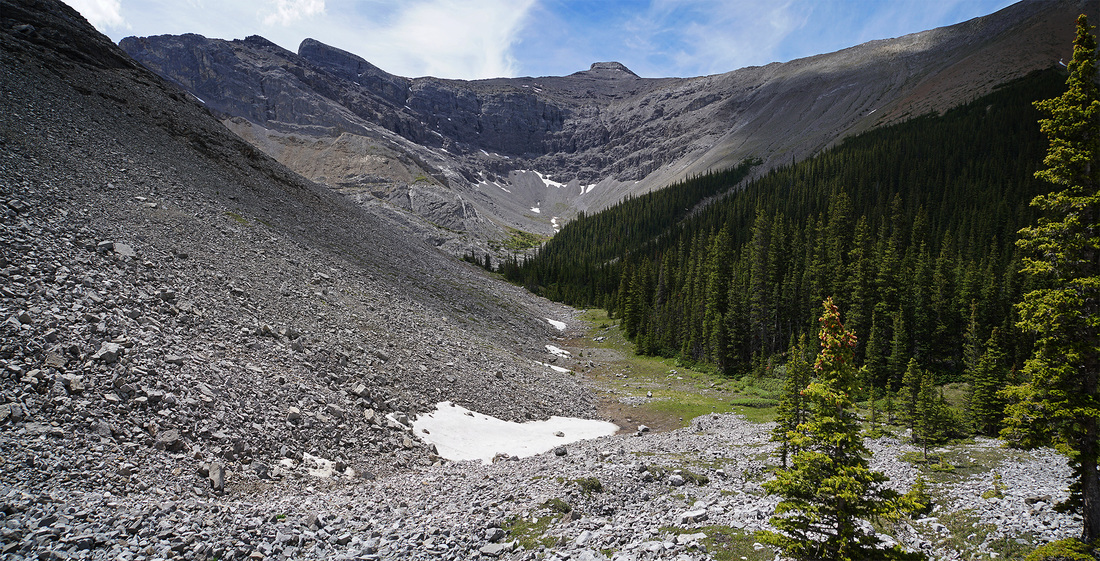 Back down the scree slope and through another forest section before I finally catch my first glimpse of Bryant Lake, the water levels are very low but at least someone has left me a seat. 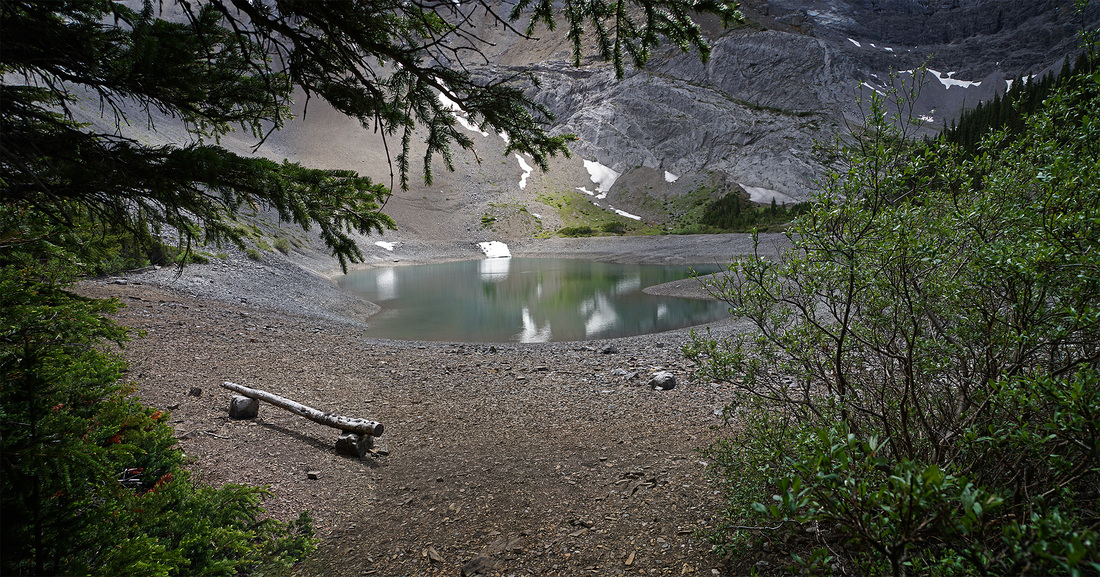 Down at the lakeside there are a few fish topping in the crystal clear water and a few remnants of camp sites dotted around. What a great place to pitch a tent and head up Mt Bryant the next morning.

My summit shot today is a little bit different to normal but my feet were so glad of that freezing cold mountain lake. Bouncing about on rocks for so long does take its toll on the ankles but it's nothing that this ice bath won't ease. 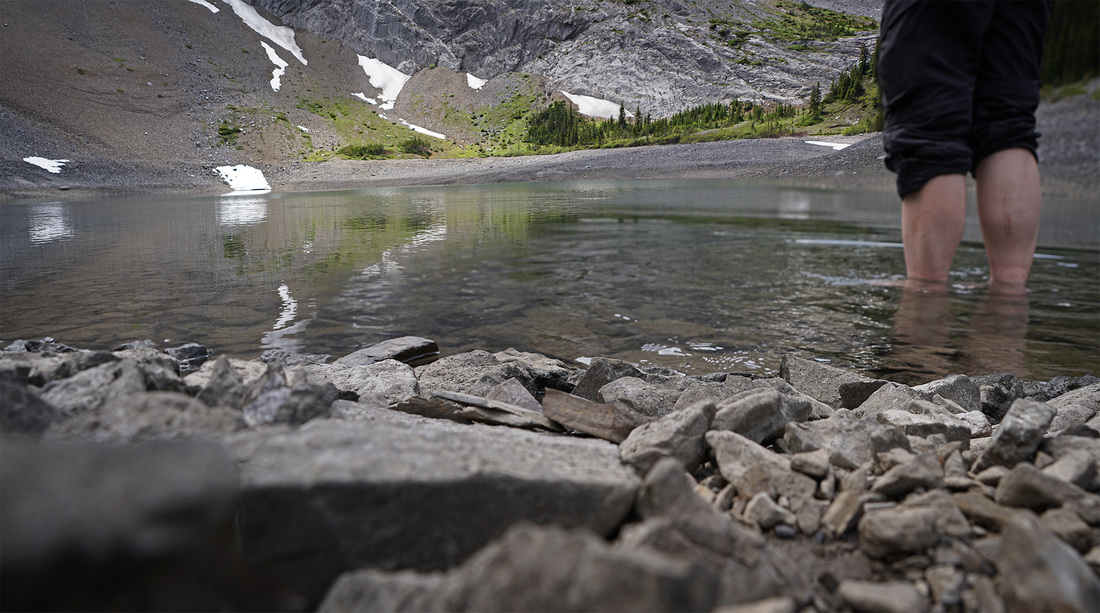 After a good lay off at the lake and a little lunch I did a bit of map checking to work an exit route that didn't need to ascend and then immediately descend that scree slope. I found that following the creek for around 1km brought me alongside that open meadow where a short scramble up the bank put me back on the trail without using the scree, a small victory on the day.

The route out is just a reverse of the route in from this point, looking at other route guides it seems I've managed to make this route longer than required. A lot of zig-zags on the way in wouldn't account for it but that damn scree slope would, I think I went too far along the west side of Mt Bryant. All in all this fact finding mission was a success as I have identified a few more lumps I can go after and even though it has little ascent it is a good workout on a hot day. 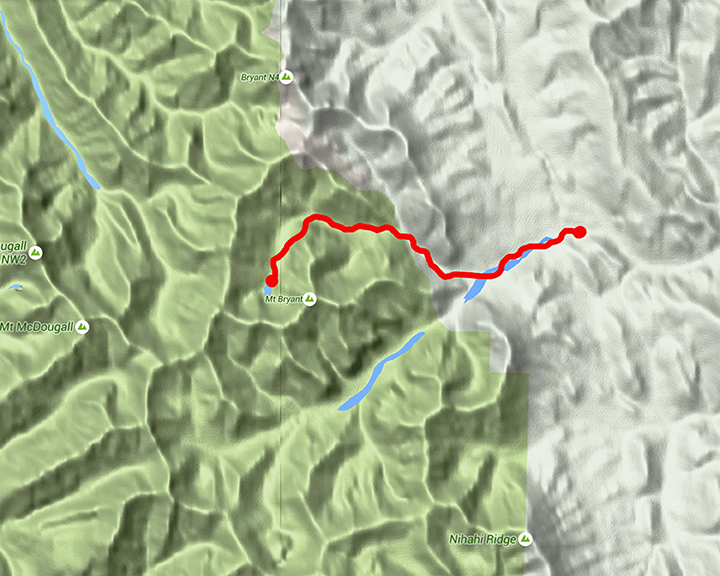 Another set of great shots !

the beauty of Canada

the beauty of Canada

Thanks Petr, I should be back to summits next week (had no grip on my dominant hand for a couple of weeks but almost fixed now)

Did think the last couple a bit tame in comparison with your usual Chris; hope the hand is back to full strength very soon.
Though perhaps not as spectacular, very enjoyable reads, excellently photographed as per usual

Another great walk and photos CW

Well done on another great report

ancancha wrote:Did think the last couple a bit tame in comparison with your usual Chris; hope the hand is back to full strength very soon.
Though perhaps not as spectacular, very enjoyable reads, excellently photographed as per usual

Thanks Ancancha, one finger now almost fully fixed, the other is a few days off then it's back to the hills

Cheers MR, it looks even better with the human eye.

Well done on another great report

Thanks TM, I actually bruised by heel slightly just with the prolonged pounding but only a 24 hour thing, the 2013 floods were incredible over 100,000 people forced out of their homes. They say it will take 10 years to rectify the infrastructure damage

We were lucky that we weren't impacted directly, I spent a month volunteering in the clean up ....it was heartbreaking to see peoples entire lives destroyed. Can you imagine a stranger turning up at your door with a truck to take away all your posessions to the tip, I did that so often for so many families it actually began to get me down 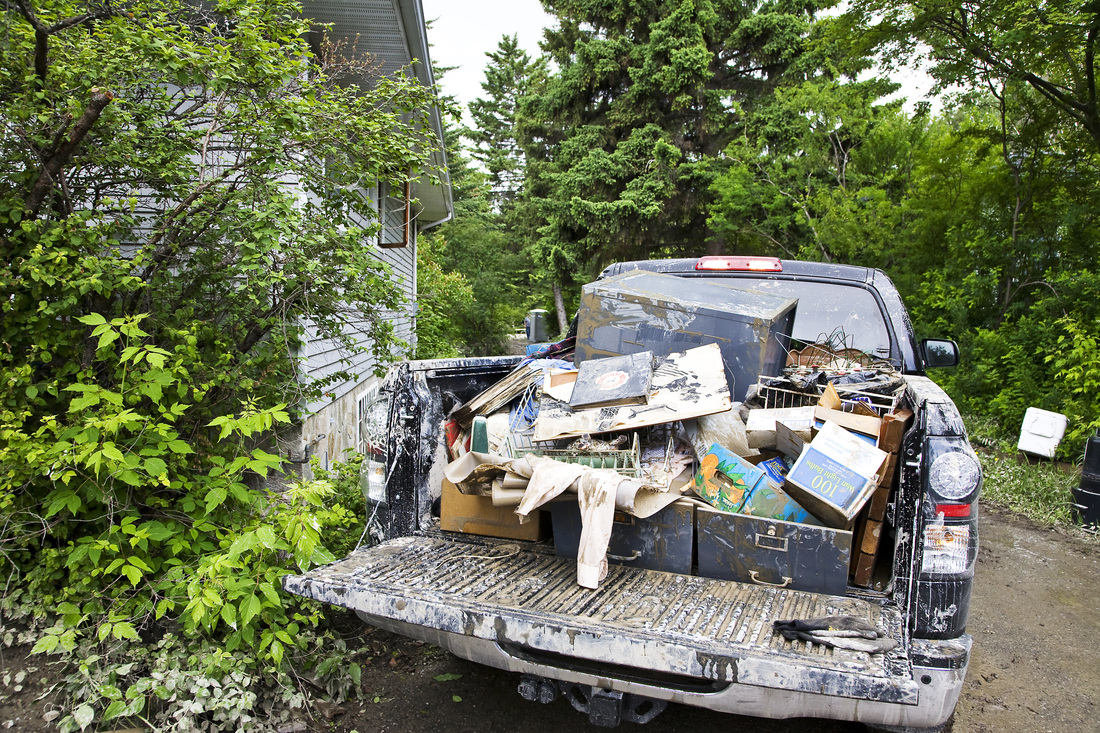 Great report and some beautiful scenery, but counterpointed by the shocking flood damage - sorry to hear how badly people were hit in 2013. We had our own Cumbrian floods in Dec 2015 which affected relatives and their neighbours, so I very much sympathise with those hit by it...

HalfManHalfTitanium wrote:Great report and some beautiful scenery, but counterpointed by the shocking flood damage - sorry to hear how badly people were hit in 2013. We had our own Cumbrian floods in Dec 2015 which affected relatives and their neighbours, so I very much sympathise with those hit by it...
Tim

Cheers Tim, the floods were an awful time but really brought out the best in the population here, city wide 'bonding' over several weeks really helped ease the burden for many

Another great report Chris , but the some of the terrain looks horrendous - as bad as pathless Alpine boulder slopes

past my sell by date wrote:Another great report Chris , but the some of the terrain looks horrendous - as bad as pathless Alpine boulder slopes

Cheers PMSD, I have to say, this isn't one I'll be rushing back to

Though those little unnamed peaks to the east were appealing so they might be worth a look.