Croatia: a walk, a via ferrata, a cave, a scramble, a saint.

Croatia: a walk, a via ferrata, a cave, a scramble, a saint.


After having spent some days in Slovenia, not summiting Triglav ( http://www.walkhighlands.co.uk/Forum/viewtopic.php?f=16&t=65650 ), the mrs and I headed of towards Croatia. Our goal there was the village of Starigrad or Seline, both nicely situated between the beautiful blue and green Croatian sea and the Paklenica National Park, the southernmost part of the Velebit mountain range.
The Paklenica national park is a walkers paradise. However, Croatian summers can be very hot. And this was the case when we arrived. Thirty two degrees of skin blistering sunshine is not the kind of weather in which I'm at my best. Good thing the sea's nearby, I could manage the 100 metres from tent to water.
But one can't be so close to Paklenica and not explore it. Summits were a no-go, that much was clear, but a look on the map taught me about Mala Paklenica. Mala Paklenica is a gully, or more precise a seasonal riverbed, on the south-eastern side of the park, climbing up to a height of about 600 metres. It has several cages and some via ferrata. From the end of the gully there's mountainpaths going in all directions, we chose a circular of about 12 kilometres and a maximum height of about 700 metres.
The Mala Paklenica itself faces north-east, meaning all morning and early afternoon, the gully would be in the shadow. After that, it's a walk through the forest, only the walk out would be in the sun, therefore a not so hot day was chosen. Walking towards Mala Paklenica from the carpark, this is the view one has of the gully. Once inside the gully, there is a lovely calm. No wind, no sound (not even of rockfall we'd been warned about). It is very green and impressive caves can been seen. It is not long before the via ferrata starts. This one is not like the one in Slovenia, in fact it's no more technical than a grade one scramble. We didn't know this at first, so we fully geared up. The via ferrata takes you over old rockfall: giants that block the way. After the via ferrata, there's still enough scrambling to be done. In fact, the gully's more scrambling over big rocks than it is walking a dry riverbed. 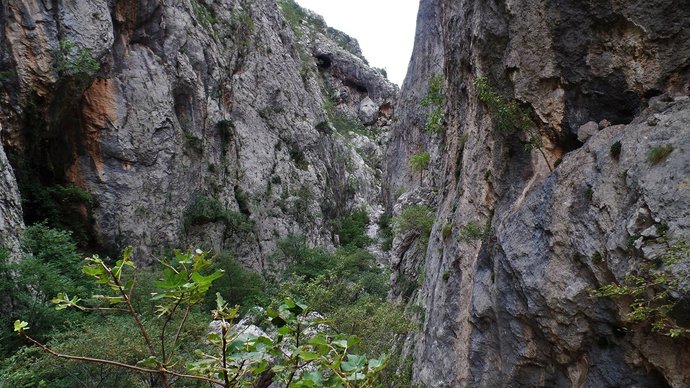 This is a view on the gully. Steep walls on either side. And yet the gully's waymarked. Unnecessarily so, as there's no other way than forward. And the scrambling goes on. All this in a perfectly cool shade and absolute silence. It's truly a little paradise. After a while we stumble upon a giant cave. I guess the graffiti spells it's name, although the map calles it the Kapljuvaca. Voda means water and it's dripping through the ceiling. People placed cut open bottles to gather it for those that would come after them. A nice gesture in a scorching hot country. The arrow points out a stamp that's been glued onto the rock. Propably, although I'm not sure, this is one of stamps one collects doing the Velebit tour. Inside the cave, I was surprised to see so many colours. I guess they're from minerals as well as from fungus. 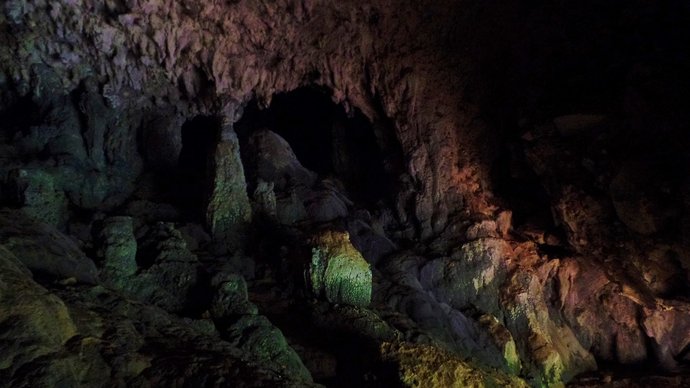 Once out of the cave, the scrambling goes on. We're only just over halfway the gully. Once out of the Mala Paklenica gully we turned left to go to Njive Lekine, a crossroad at about 700 metres high. This is the view from there. Clouds are covering up the mountains in the background, the Crni vrh, the Lukovaca, the Greblje and the Skiljina kosa. (I like these names, they're unpronouncable) 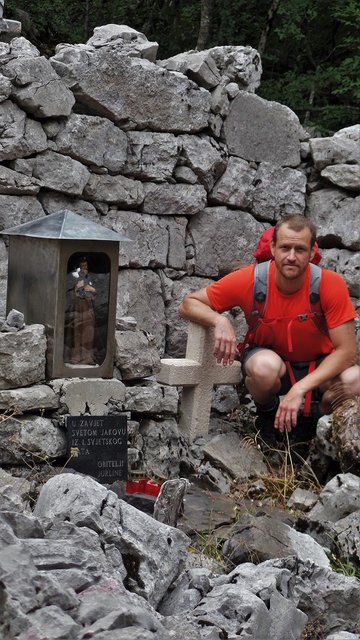 Just after the crossroads of Njive Lekine, there is a memorial (?) for Saint Jacob (or Jakov as he's called in Croatia). Ofcourse I had to pose next to it. After Saint Jacob, the route offers less distraction and adventure as it did the first half. It is still a nice walk though. Behind the peaks on the horizon, there's the sea. The walk out takes longer than we calculated. Although the sea is in view, we're still at an altitude of about 600 metres, zigzagging our way down to the carpark at 50 metres.

All in all a very pleasant walk, that offers a lot of variety. A good alternative if climbing summits in 32 Celcius is not your most favourite hobby.

Ascending anything at 32 degrees is out of the question for me mate, but this looks like a great find for a hot day. Love the cave too and the generous placement of cups to catch water drops, I guess careful replacement is needed to make sure the tradition is maintained.

. Just another place to go to

ChrisW wrote:Ascending anything at 32 degrees is out of the question for me mate, but this looks like a great find for a hot day. Love the cave too and the generous placement of cups to catch water drops, I guess careful replacement is needed to make sure the tradition is maintained.

Thanks Chris, it was indeed a good find for a hot day. I hope more sun-shy people like myself can benefit from this report this way.

. Just another place to go to

Thanks LS. Yes, I know the problem. We need increasingly larger buckets for our lists

There's enough days in our lives, the problem is we fill most of them with work. But seriously, the Paklenica park (and the Krka park that we also paid a visit) are beautiful places if you can stand the heat. Pity is I can't.