History
500 years ago the Banda islands (Spice Islands) were the most valuable piece of real estate in the world. The islands (until the mid-19th century) were the world's only source of the spices nutmeg and mace. So valuable that a sack full of nutmeg from Banda would put a common sailor into an early retirement if he made it back to Europe alive.
The journey from Europe to the islands around the Cape of Good Hope used to take up to 12 months and only when Hendrik Brouwer decided to make use of the strong westerly winds and travel across the unknown Southern Ocean, he shorted the journey to 7-9 months.
European trade existed since 1512 and another 100 years passed until the Dutch forced their present onto the islands and build a fort. They owned all islands minus the tiny island of Run (1.9 miles long and 0.62 miles wide) which was owned by the English -much to the annoyance of the Dutch. The Dutch and English battled many years over the ownership until 1667 when the treaty of Banda was finally signed. The treaty was based around a property swap of the island of Run with a useless American island covered in swamp called New Amsterdam – now known as Manhattan. 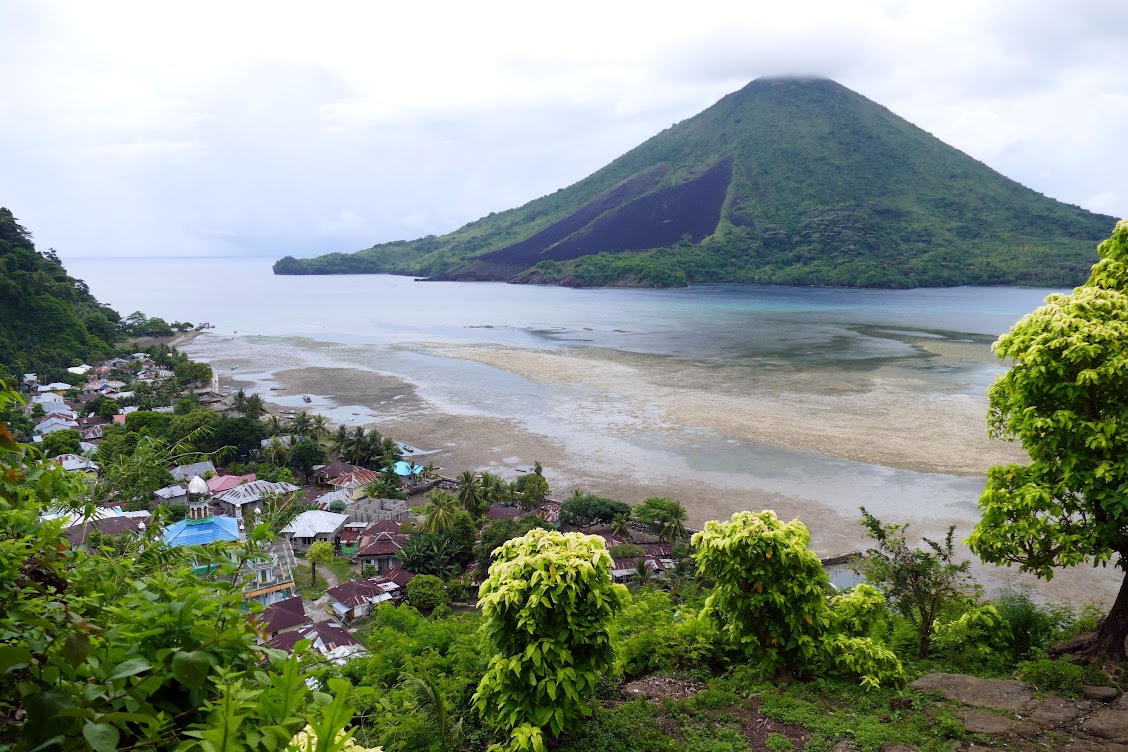 Village on Banda Besar with the Volcano Gunung Api

Today
Fast forward 500 years and the journey to the Banda islands ‘only’ took me 4 days with the help of 4 planes and a speed boat. Personally I think the Banda islands are paradise on earth. Deserted beaches, unspoiled by tourism and the locals are some of the friendliest people I have encountered in the world. All 10 islands that make up the Bandas are volcanic and rise 22,ooo feet from the sea bottom. The most notable one is Gunung Api the Fire Mountain. The last eruption was in 1988 and most of the islander I met still remember the eruption which fried the fish in the sea, when the lava entered it. It is currently classed as dormant, but could erupt any time and is a constant threat to the islands.

The climb
Gunung Api is 4000m tall, but lucky for me only the last 650m poke out of the ocean. We had hired a local boatman who took £1.20 for the short return journey from Banda Neira and dropped us off at the start of the path.
It was already 11am and the heat and humidity of 93% meant that I was sweating before I even started walking. The path went straight into the jungle and started with a gentle climb. I passed a mix of house high bamboo, Palms, Nutmeg and Cinnamon Trees and felt as if I stepped into a different world.

I was in awe until I walked into a spider web – face first. Usually I would not have bothered, but when you know that the spiders are half the size of your hand and the thickness of your pinkie it is a different matter. After a 2 min screaming fit I calmed down enough to walk on.

The path started to climb steeply and consisted of loose volcanic rocks which made the climb arduous. For each step I took it felt I was sliding 2 back and I regretted walking through the heat of the day!
I have never sweated so much in my entire life and within 45 min my clothes looked as if I just walked through a rain shower. It was ridiculous how many breaks I had to take, but the heat really got to me. Finally 2/3rd into the walk the trees stopped and made way to smaller plants and lots of Orchids and wild pineapple. It was lovely specially when a slight breeze cooled me down a little bit.

The top comes into view

With the top in sight all plantation had been giving away to loose volcanic rocks, evidence of the last eruption. Hot smoke was rising from numerous openings in the ground and when I touched the ground- it was hot. It was one of the strangest experiences I had in my live, but I felt as if I was walking one something which was alive below me. I reached the top and edge of the crater 2h after setting off. It was spectacular and I spend a good 20 min laying on the warm ground gazing down the edge and watching the steam escaping the depths of the mountain. Looking around, the scenery was stunning.

View into the crater

Views towards the lava flow

Out towards the sea

Run (furthest away) and Ay. Run used to be the first British colony abroad.

Myself and the island Banda Neira (which was my home for a week) across the water. It even has an airport

I could have stayed for hours, but it was time to go. The path down was worse on the way down. An endless slide on loose rocks, but at least the way down was much quicker. 1.15 h later we were back were we started and just had to wait for our water taxi back.

I stayed a full week on the Banda Islands and once I returned back home, I am already dreaming of a return at some point in my life.

Some more photos from the Banda Islands

300 year old nutmeg plantation. The massive trees are Canari (Pili) trees. They grow a nut which looks like an almond and they were planted to protect the smaller nutmeg trees from the sun. The smaller trees you can see are nutmeg trees. The plantation also grew cinnamon and cloves trees.

Nutmeg on a nutmeg tree. The nutmeg fruit is made of 3 parts. The green fruit is made into jam and sweets. The actual nutmeg kernel is surrounded my a layer which is mace (also used a s a spice) The islands are in the red circle

What an exotic place to visit! And what an informative and well-organized report! I was totally absorbed by your account of the history of the islands - a really fascinating part of the world. I can imagine how exhausting that must have felt climbing the jungle-covered volcano in sauna-like heat and humidity. Hot days in Scotland are bad enough!

Fantastic. Thanks for sharing.

Very interesting background and a beautiful looking hill. Colder climes for me though.

Interesting report and history. Thanks for posting.

Now that is a holiday destination ML...as for that spider, I don't mind spiders at all...but I'd have screamed too

Well, that's what I call off the beaten track! So glad you included the map or else I wouldn't have had a clue - and I though my geography was pretty good. A very nice account.