Track_Wether Hill 2016-11-04 Corrected.gpx Open full screen  NB: Walkhighlands is not responsible for the accuracy of gpx files in users posts

After two non-walking days, today was our last day in the Lakes for this trip. The weather forecast was ok, though not great, and we decided to make a third attempt on Wether Hill, the previous two having been defeated by bad weather and running out of time. The plan was to drive to Martindale, up via the western flanks of Steel Knotts and Gowk Fell, and down via either Fusedale or Steel Knotts depending on weather conditions. 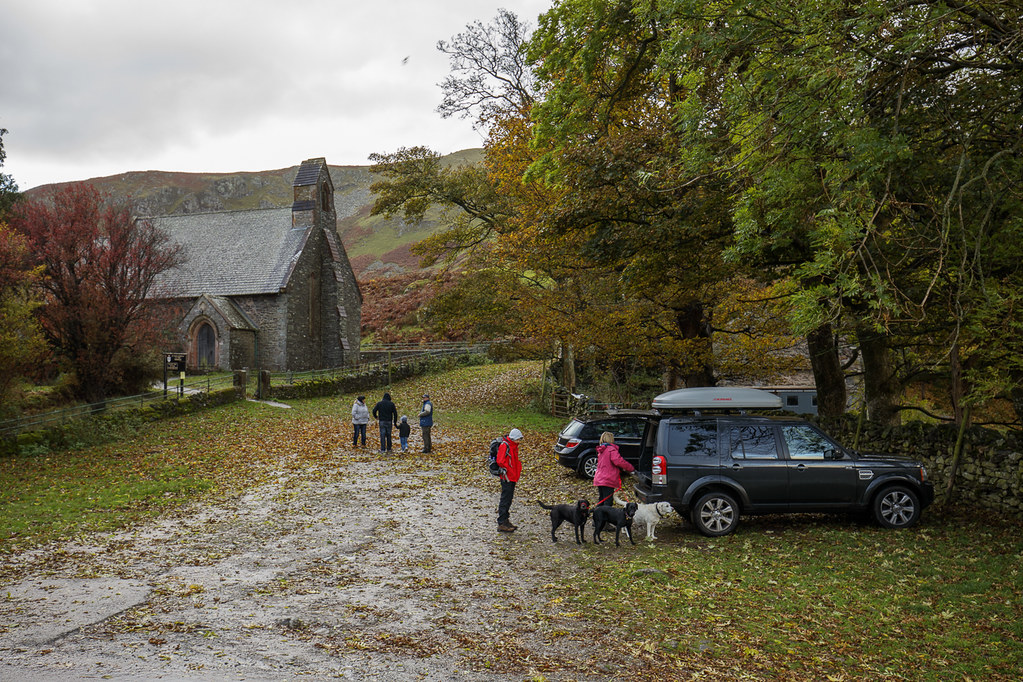 Parking at the church

We parked at the new church, partly because it kept the return route flexible and partly because it's a nice high starting point. We were hoping to be able to pick up the path from Martindale Old Church without having to drop right down to the valley. 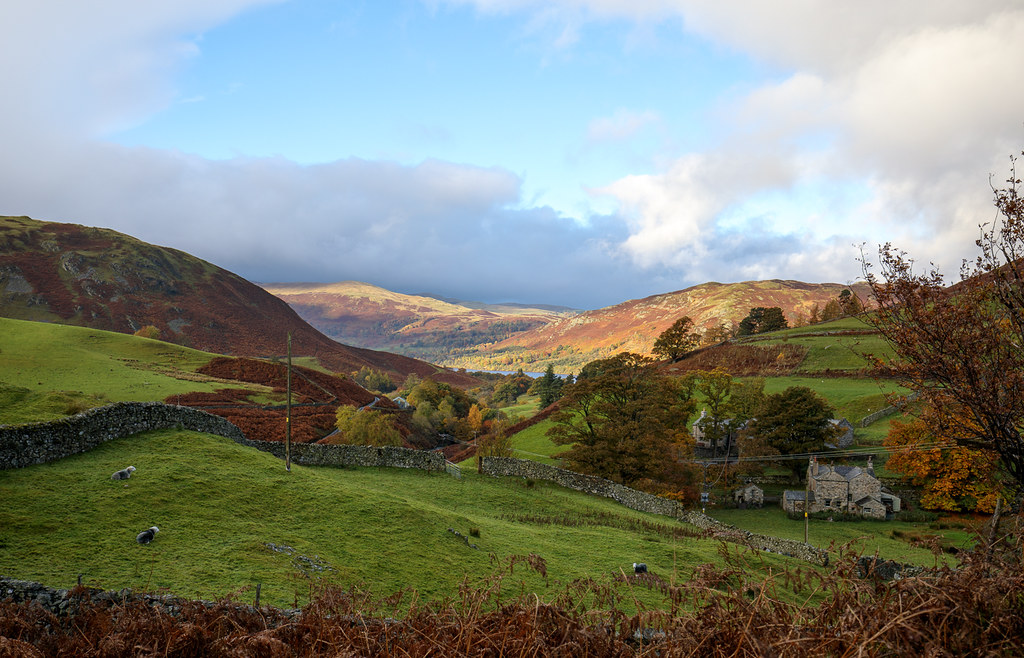 The light on the far shore of Ullswater was lovely. 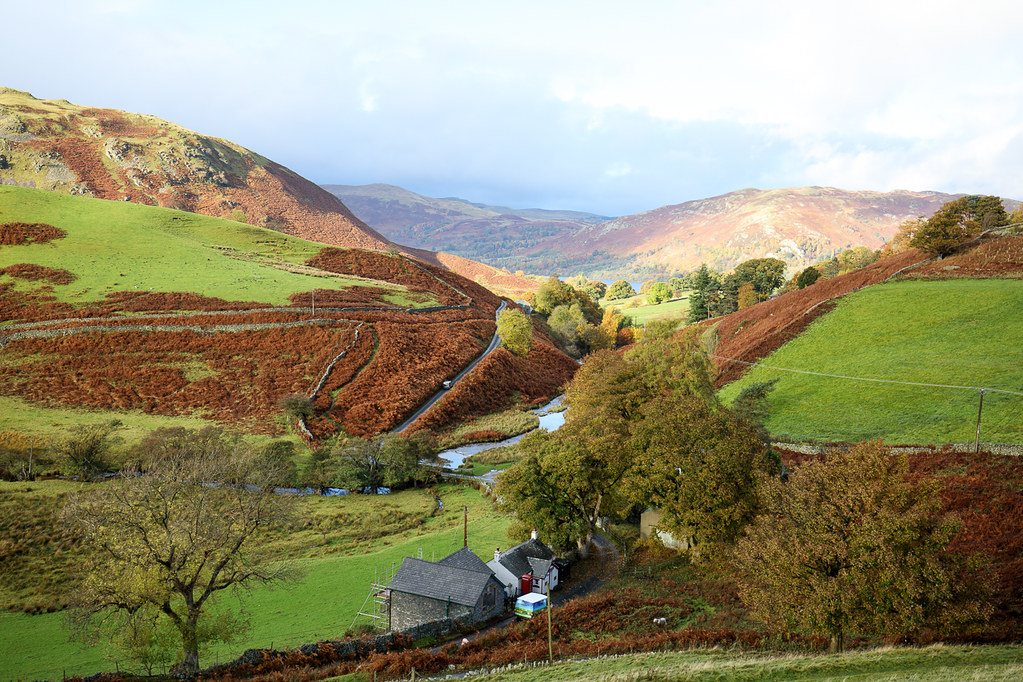 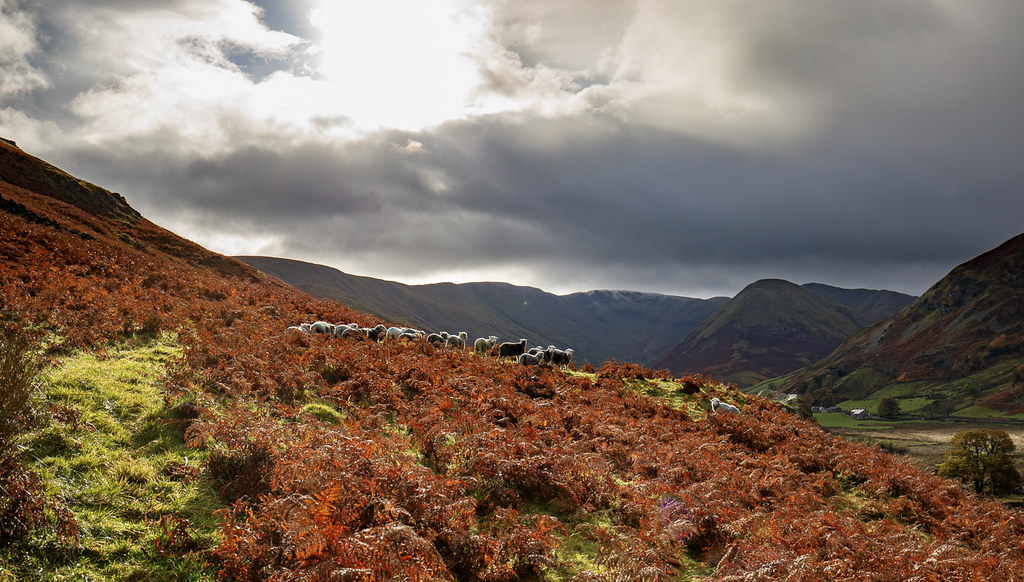 The sheep are waiting

But the weather on this side was deteriorating. Soon we were in full wet-weather gear. 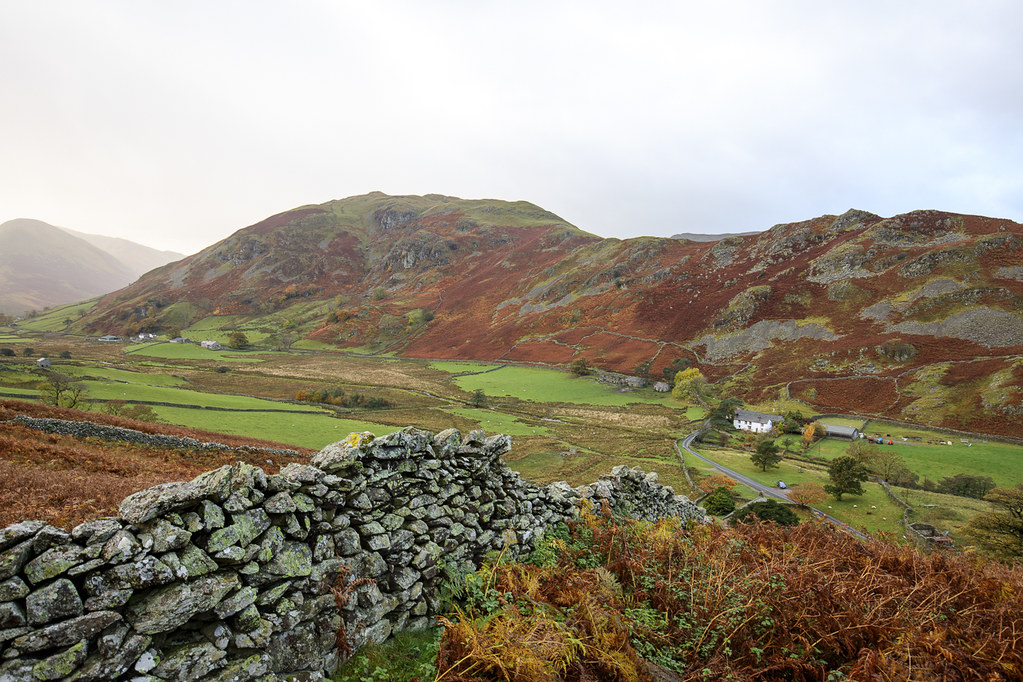 Always nice to be able to look at where you walked earlier in the week... 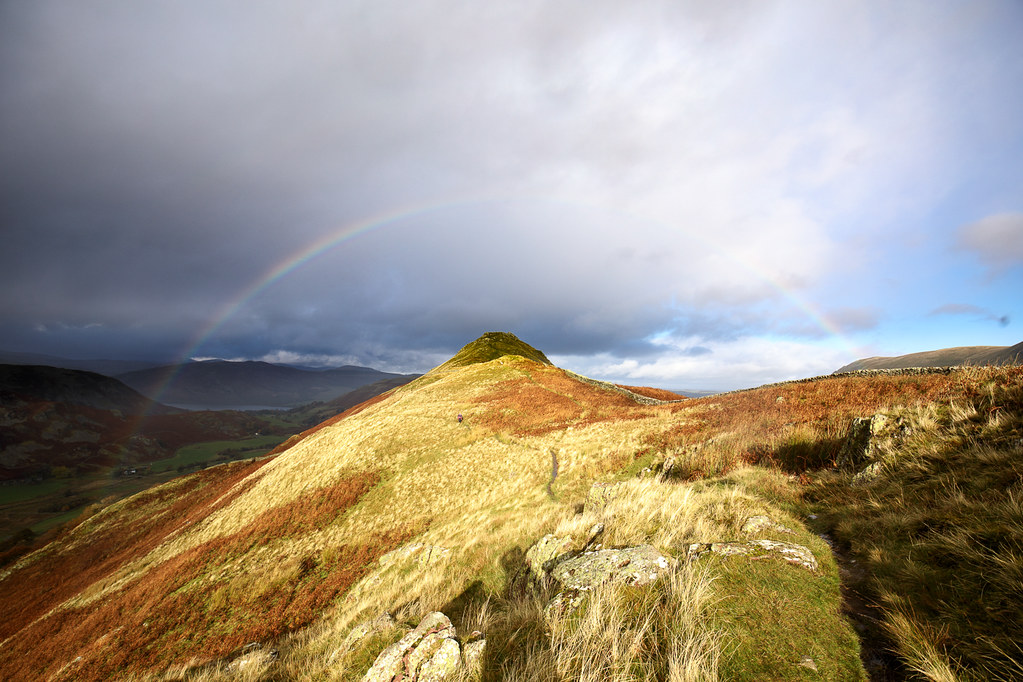 The good thing about walking in the rain - lots of rainbows... 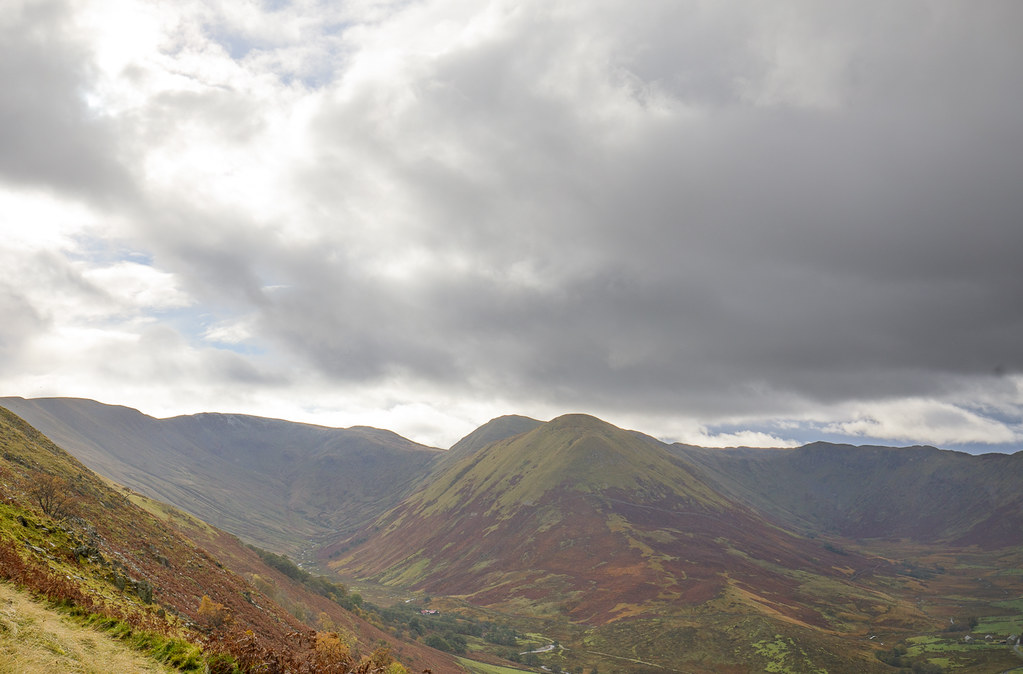 Inclement weather over The Nab

The bad thing about rainbows - it tends to be raining... 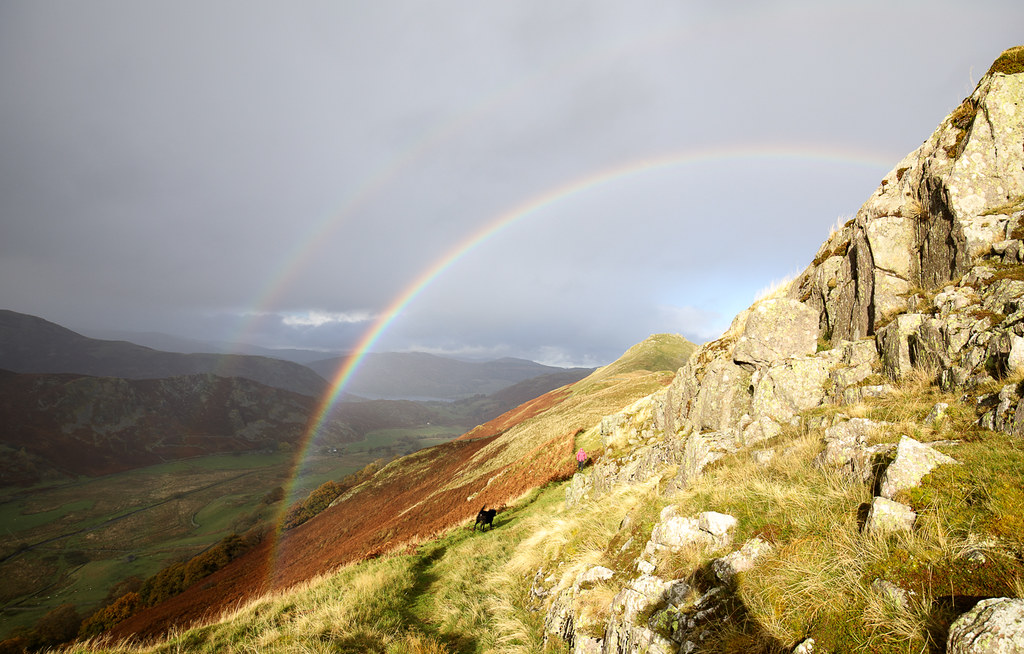 But the rainbows were spectacular. 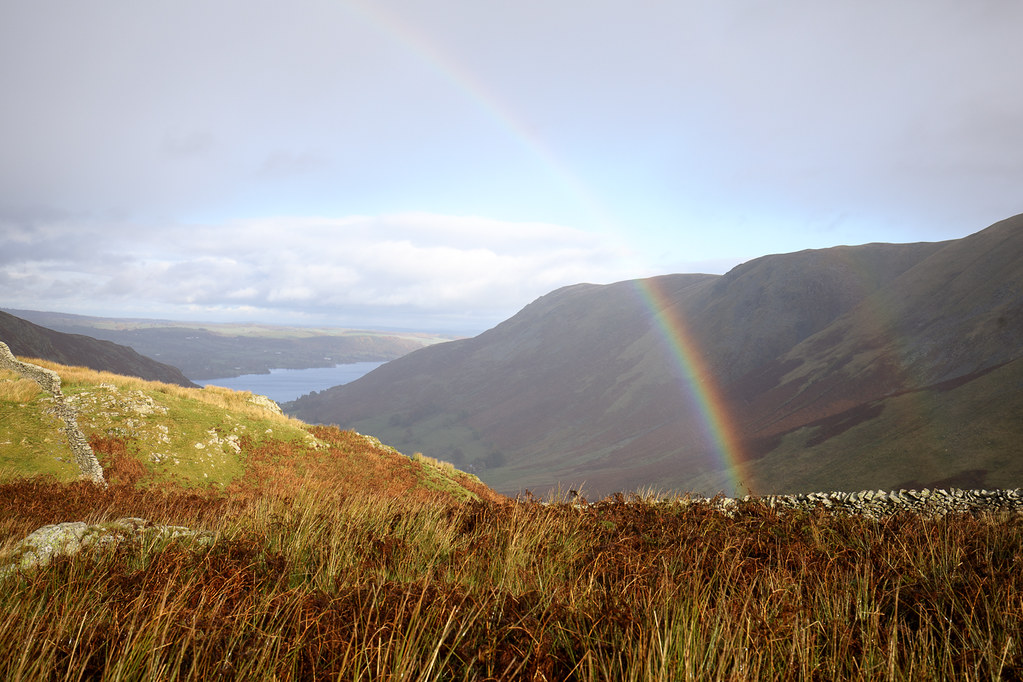 Ullswater through the rainbow

Eventually the rain got heavy enough that the camera was put away, only to reappear once we reached the main High Street ridge and the weather improved. 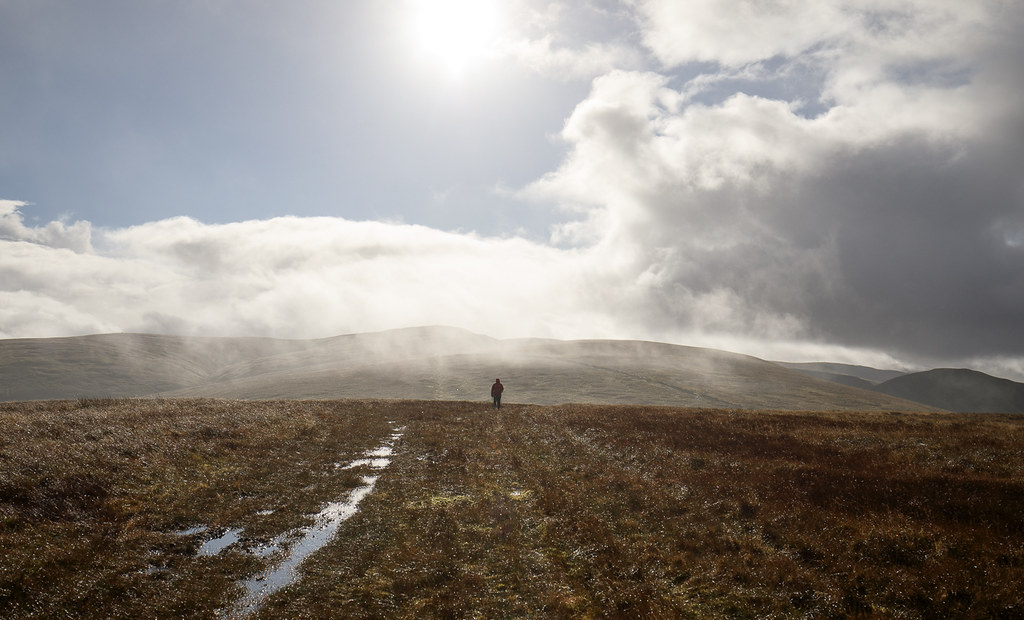 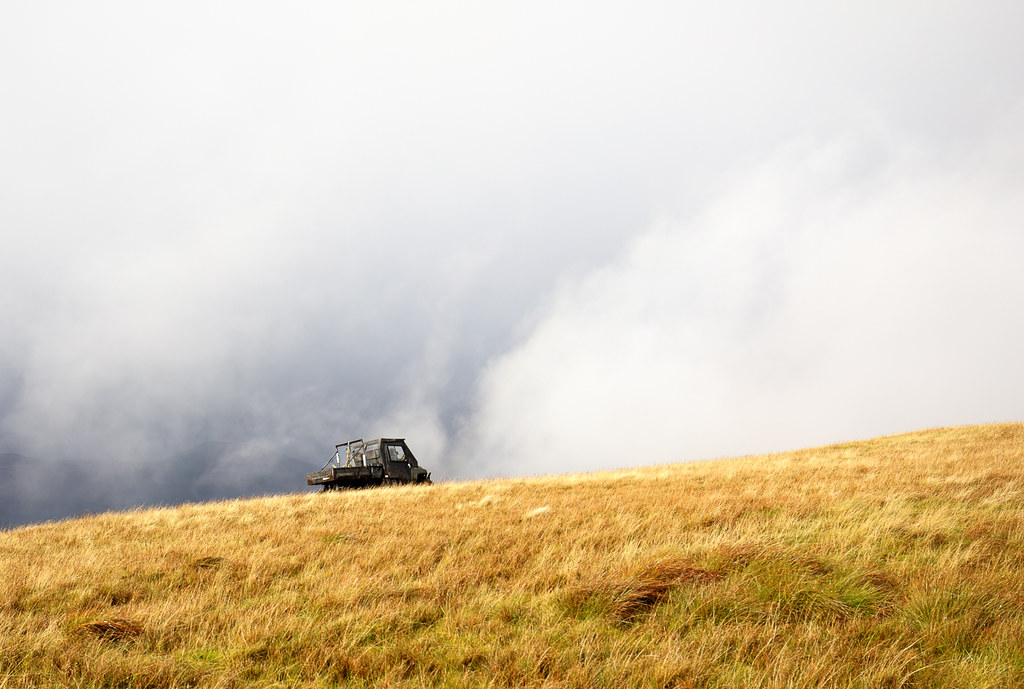 Roman road still in use 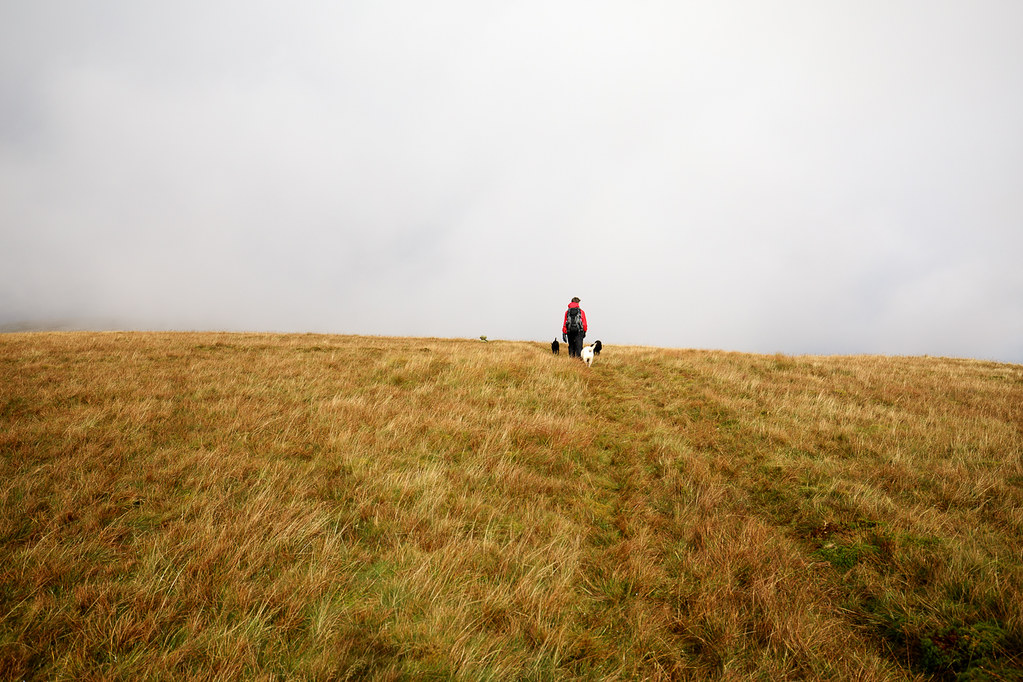 It's not really clear where the summit of Wether Hill is, but this was one of the candidates... 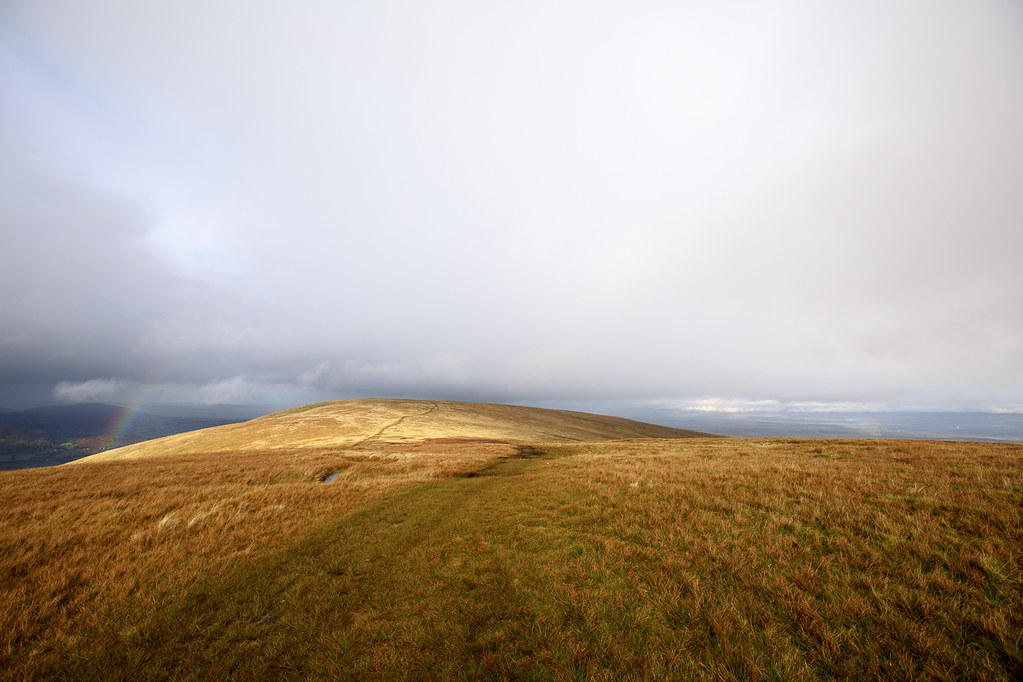 On the way up to the ridge we had taken a somewhat roundabout path, but there was at least a path which made the going easy. On the way down, we decided on a more direct approach - straight down the side of the hill towards our destination. 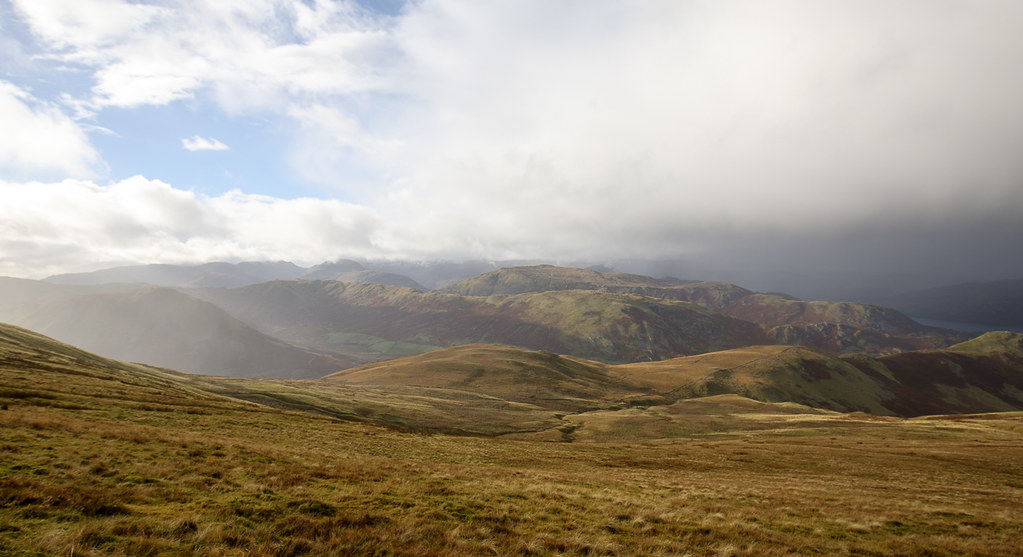 The gradient was just right (for going down - I wouldn't have wanted to come up this way) with easy grass tussocks underfoot.

More rainbows on the way down. 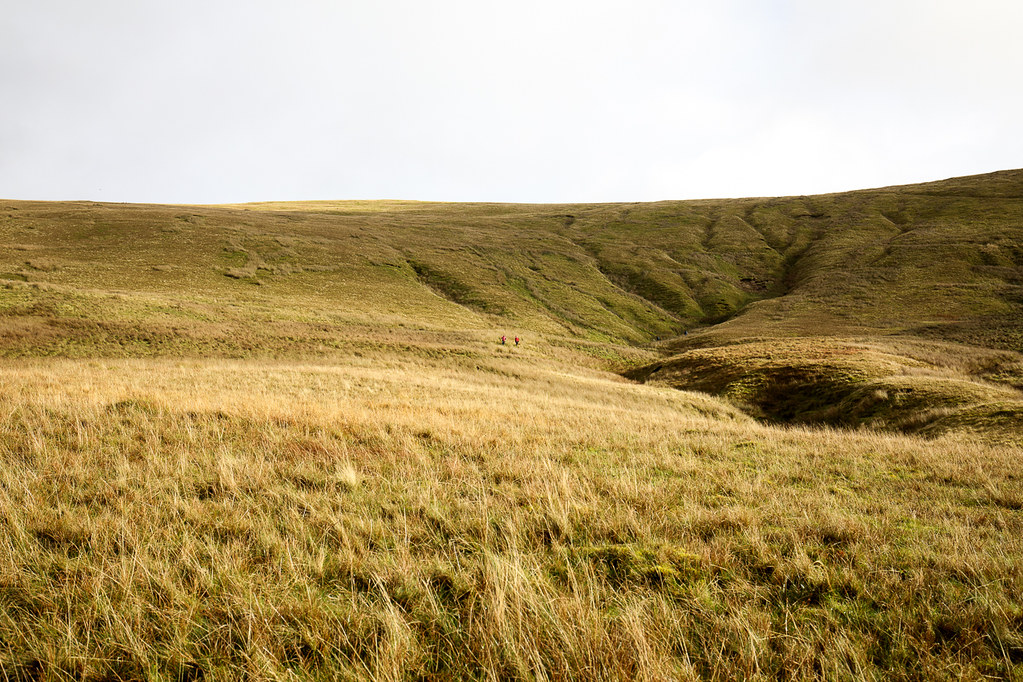 As we descended we saw some walkers coming up that seemed to decide that if we were coming down that way, it must be a good route. I didn't have a chance to correct them... 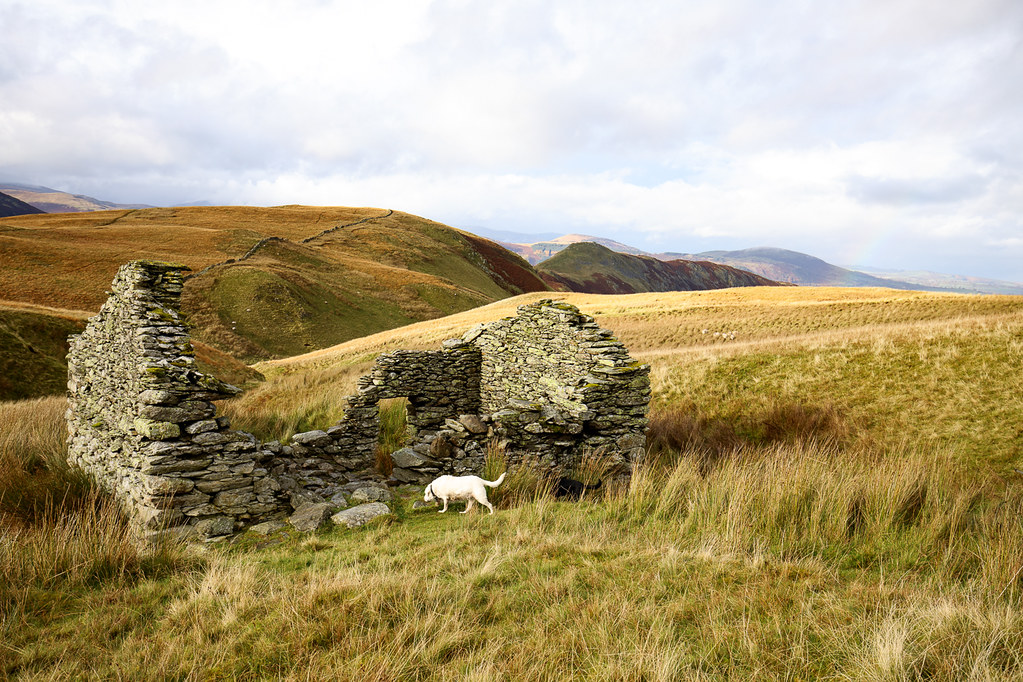 A lot of work must have gone into building this once - not sure why... 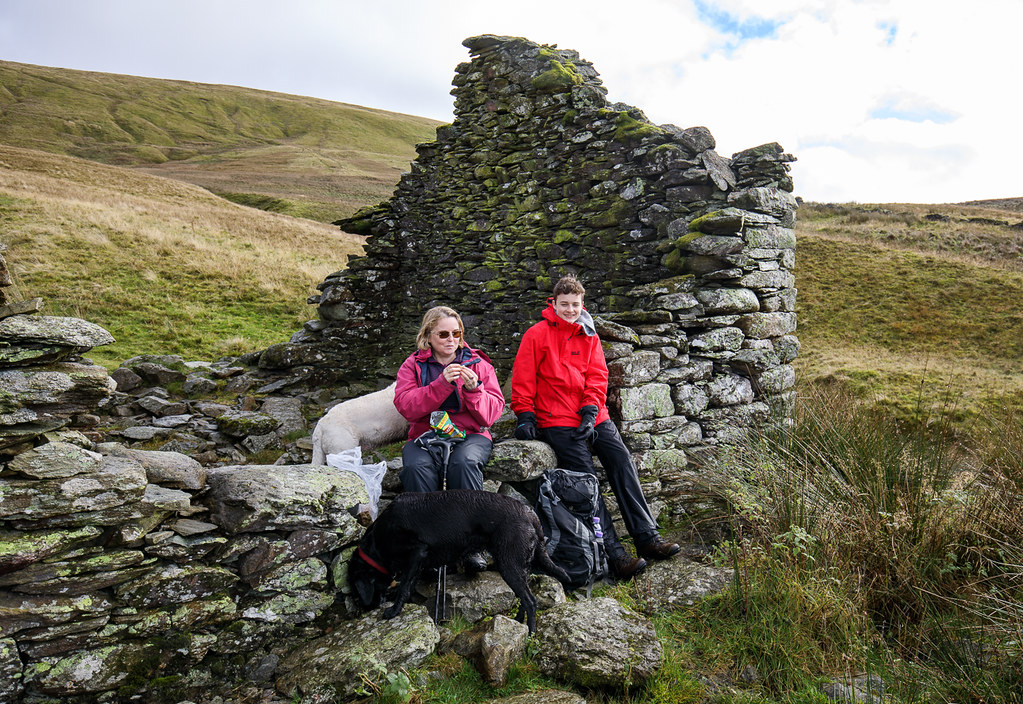 Lunch at the broken house

But it made a good spot for lunch. 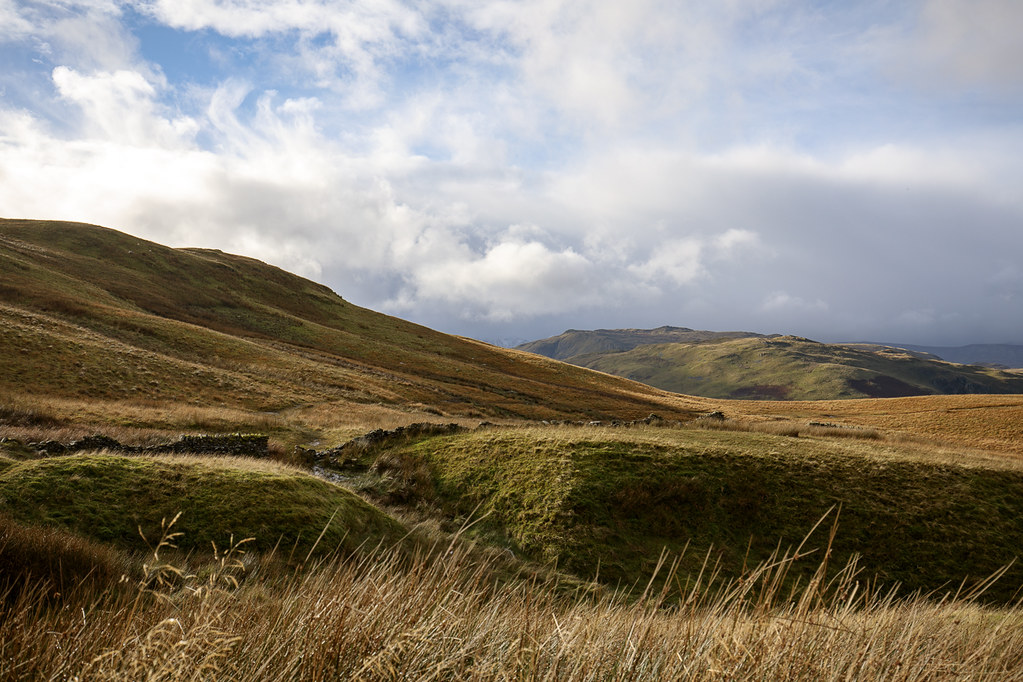 Snow in the distance

You can hardly tell in the photo but we spotted snow on the slopes of Helvellyn in the distance. 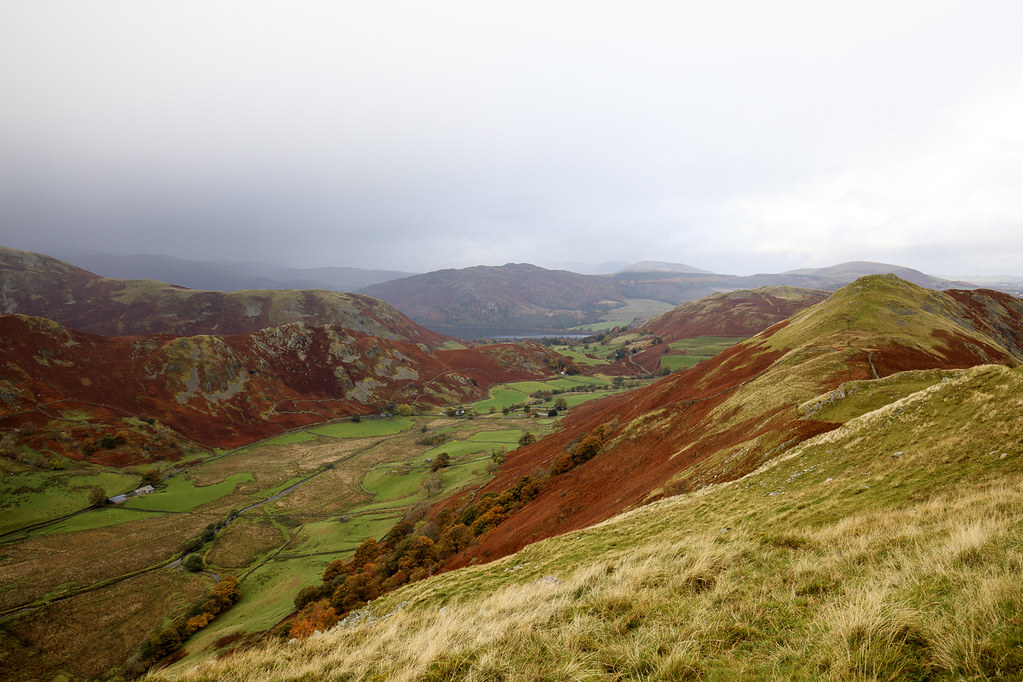 We opted for the route over Pikeawassa/Steel Knotts for the return - a very direct route back to the car. 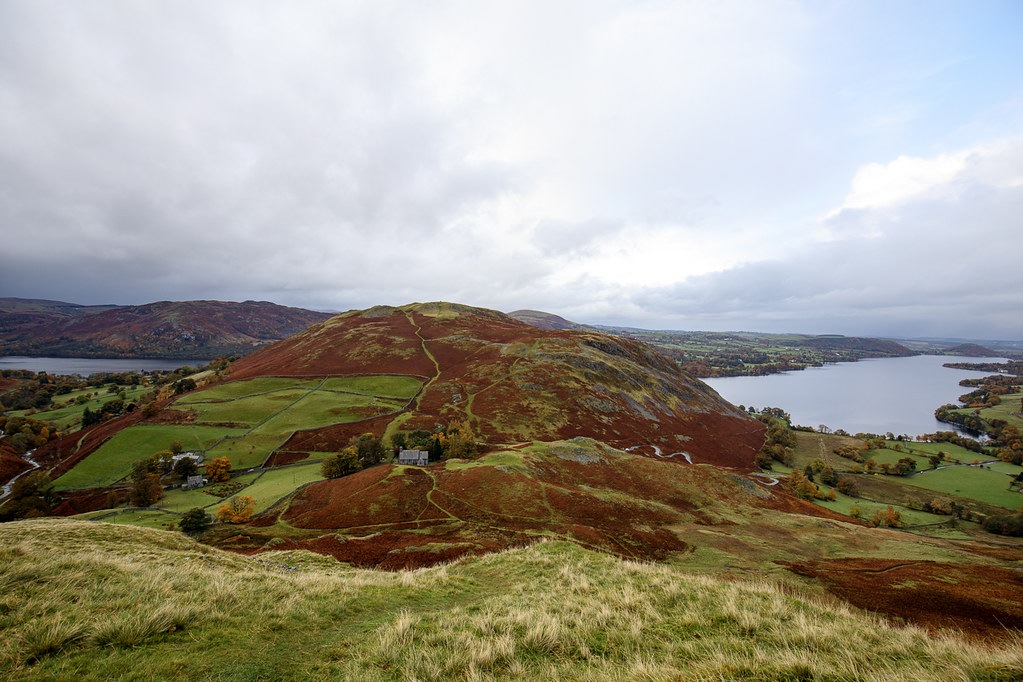 Hallin Fell and the new church 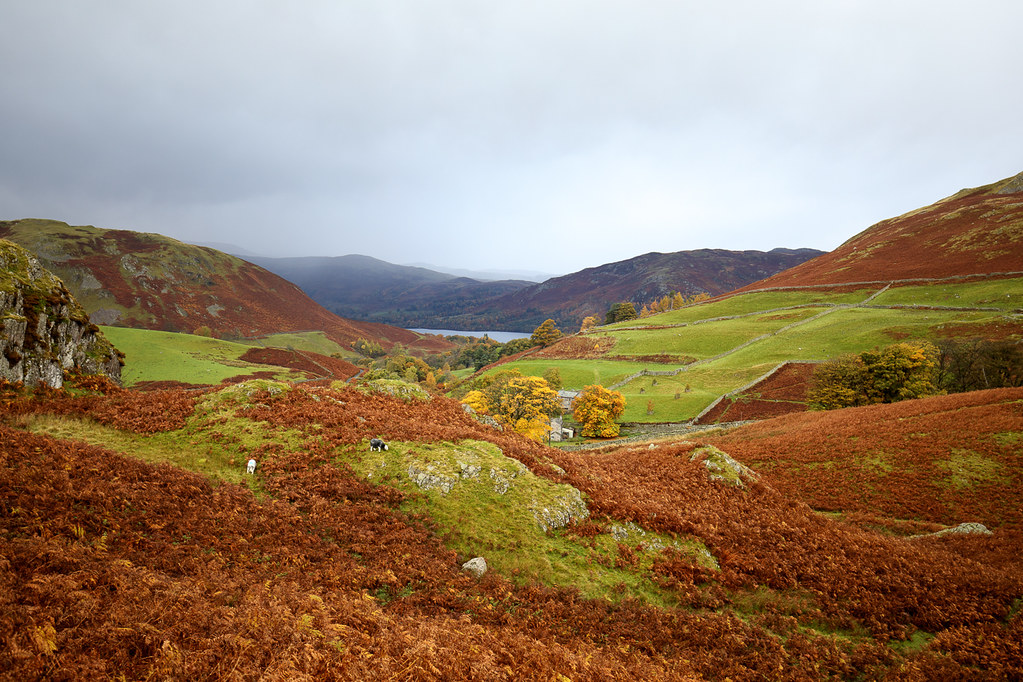 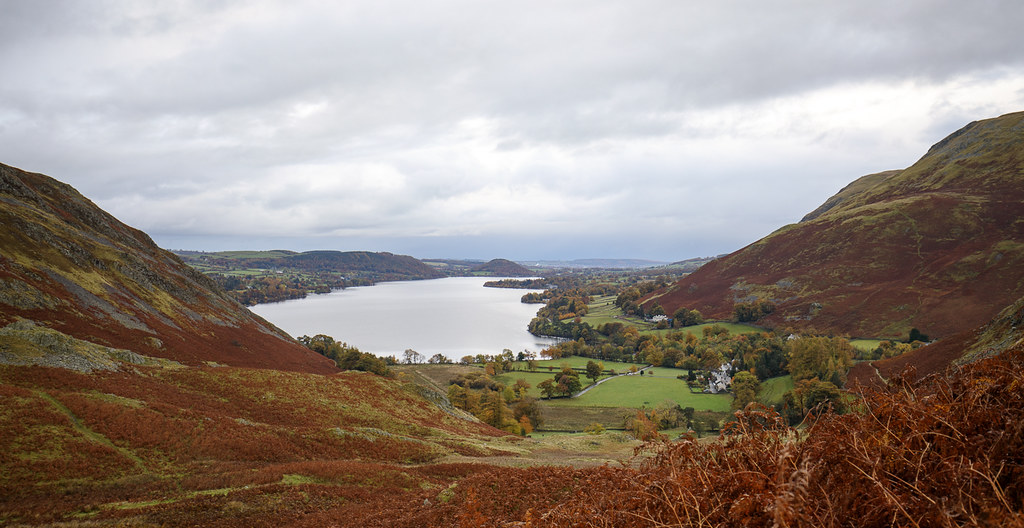 Not ideal weather but still an enjoyable walk. Off to the Howtown Hotel for hot chocolate, then home.

Re: Wether Hill and Pikeawassa

Another cracker RC, great light in those early photos and what an array of rainbows too, though as you rightly say it does mean it's raining