On the run-up Halloween, what better walk to do than Pendle Hill, place of witches! This was not my prime reason for venturing to these God-forsaken parts (deepest Lancashire), however. Not long ago I had spent a month sectioned in Burnley Hospital, worrying about ever getting out, each day being able to look longingly at Pendle Hill in the distance from one of the ward windows. I made a point of making my first visit to this famous place of Horrible Histories when/if I got discharged. The time felt right, and at the same time I could revisit the ward to take stock of how far I had come - metaphorically, for 'tis only down the road from my home town as mountaineering expeditions go. So, a personal day, and what's more I find history damned fascinating, especially this type of stuff. On the trail of witches. Standing at only 1827 feet (557m), Pendle Hill's fame outstrips its status as a mountain. Indeed it is not much more than a rough walk along tourist-friendly paths for the most part. There are a variety of ways one can approach it from and needs no more than 3 hours for a visit to the summit. I took one of the standard approaches from the village of Barley, but not before a visit to the Pendle Heritage Centre in Barrowford. This is where the Pendle Witches Trail begins or ends, depending on which way you want to follow it. This is a road route of 45 miles, visiting the places it all happened in the 17th century, passing through the Trough of Bowland with the other end being the place of execution - Lancaster, where I am proudly from. Maybe I will do the full trail (that's trail, not 'trial') another time.

I should explain: 'Witchfinder General', that excellent 1968 British film, achieving a striking historical authenticity on a limited budget, unsurpassed to this day. Not a barrel of laughs, and today's censors might even have an issue or two with it. I couldn't resist interspersing a few scenes from it, as after all the context is what made an otherwise nice-but-unexceptional walk so interesting. The movie dealt with Matthew Hopkins who made a name for himself in East Anglia during the English Civil War (1642-46), conducting his hunts there and proudly bestowing the title upon himself. However, I've been fascinated to learn that the Pendle Witches trial in 1612 is actually what kicked off the craze for witch-hunting in England. For movie buffs, Vincent Price's sadistic side-kick in the film, John Stearne is a real character too. 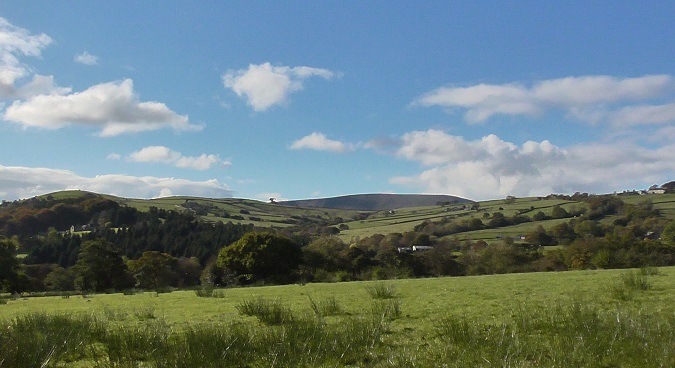 The approach to Pendle Hill. The upper reaches of Ogden Clough. Feeling of being watched. Looking back down Ogden Clough. Bleak in the other direction too. Path to the summit. Burnley shirt left on trig point was not mine.

At first the walk was an easy and picturesque stroll by woodland and the Ogden Reservoirs along tarmac. A short stiff climb to the upper reservoir brought a sense of the wilderness walk beginning in earnest. From there a couple of direct routes to the summit can be taken, but I chose to follow the slight detour of Ogden Clough. This is a striking geographical feature, a gorge carved out over millennia by a waterway, and interesting to follow it as it curves sharp right to lead towards the summit. The path is distinct, and along the top there is the luxury of a slab causeway, a modern creation increasingly common to the Pennine peat moors. Nevertheless, it was easy to imagine a stray witch or two on this bleak landscape. The weather, sunny but with a chill breeze did not seem to offset this feeling too much, but I could imagine how grim it would feel on a misty or truly wintery day! The surreal sense of clash between the ancient and the modern I had felt all day seemed to be symbolised by the Burnley FC shirt somebody had left on the trig post. Descending via Big End, the distinctive steep north-eastern face of the hill, I returned to Barley. If you could take away all the cars, this is a village which feels in essence unchanged since witching days! The village of Barley. Addendum: my 'before and after': View of Pendle Hill from my ward in Burnley Hospital. View of my ward in Burnley Hospital from Pendle Hill.

I can imagine your desire to make this hike after looking at it for so long TEA. Some nice shots along the way and the last two in particular showing just how far you've travelled

'As an aside I thought the summit of Pendle is a strange place for a Burnley fan to finally come to his senses'
Possibly it was kind of attempt at a spell to keep them in the Premiership!

Addendum: I have since learned that Alice Nutter, one of the most famous of the witches, by all accounts ended up truly believing herself to be a witch under the weight of the social stigma of the time and the intimidating power of the inquisitional authorities. The sheer insanity of the interrogations, psychological torture and prestige of her inquisitors in effect broke her psychotically. Nasty stuff - and all too believable.

The English Alpinist wrote:Addendum: I have since learned that Alice Nutter, one of the most famous of the witches, by all accounts ended up truly believing herself to be a witch under the weight of the social stigma of the time and the intimidating power of the inquisitional authorities. The sheer insanity of the interrogations, psychological torture and prestige of her inquisitors in effect broke her psychotically. Nasty stuff - and all too believable.

A truly unforgivable episode of history TEA. I'd like to think that the inquisitors are all rotting in the hell of their own cruel belief-system.