Normally I would post a walk report like this on a german walk forum, but maybe I can wet the appetite of someone, to explore the region as I do for some years now.
I am living in a region of Germany, called Palatinate, once, during the middle ages centre of the so called Holy Roman Empire.

There are more than 70 castle ruins in a very small area, many of them hidden in the forest. Why ruins? Easy answer, the region was heavily devastated during the Thirty years war, when nearly every nation involved was at some time rampaging through the area. After that around 1689 there was a war of succession when Louis XIV and some german Lords fought for the area. Louis had nearly every remaining castle in the area blown to pieces. Of course, most of them where small castles perched on narrow sandstone cliffs, which are very prominent in the region. Meaning, as structures of defense they where outdated for quite a while since, they were not able to withstand artillery, or more modern weapons.

On this tour, 4 of them can be visited in a very tight corner, sitting on the german/french border. Why so many? That is another speciality of the area, since inheritance was not for the eldest son, but divided equally a lot of castles where built for family members. Sometimes when parts were gambled away or otherwise lost, this led to interesting constellations, like sworn enemies owning parts of the same castle.

All the wars and an outbreak of Black Death left the area depopulated, and, regarding population density in germany in general, it still is quite "unpopulated". There are only small villages in a big forest.

Now to the walk. Here an overview: 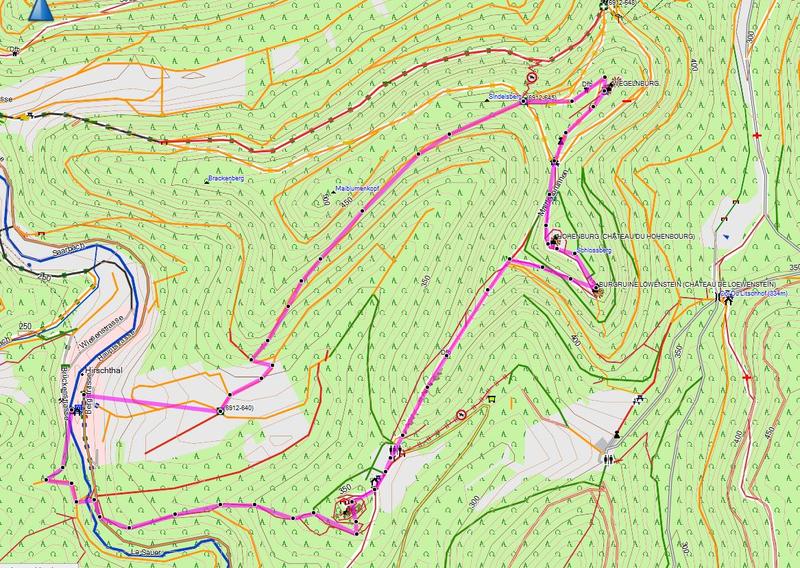 Starting in Hirschthal( meaning stag valley in english) the walk starts uphill, very steep.
After reaching the first plain, views to our targets of the day open up.

The first thing coming in sight is "shepherds rock" one of the very signatory red sandstone cliffs typical of the area. 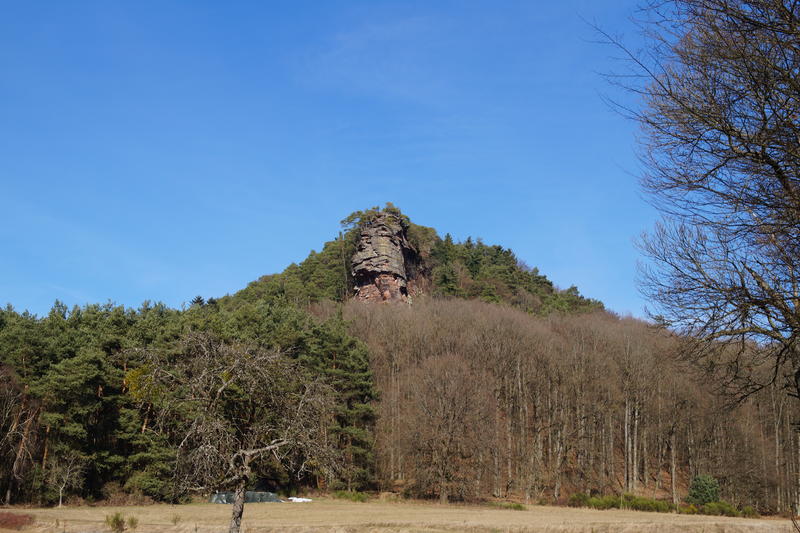 On the other side, Castle Fleckenstein can be seen. 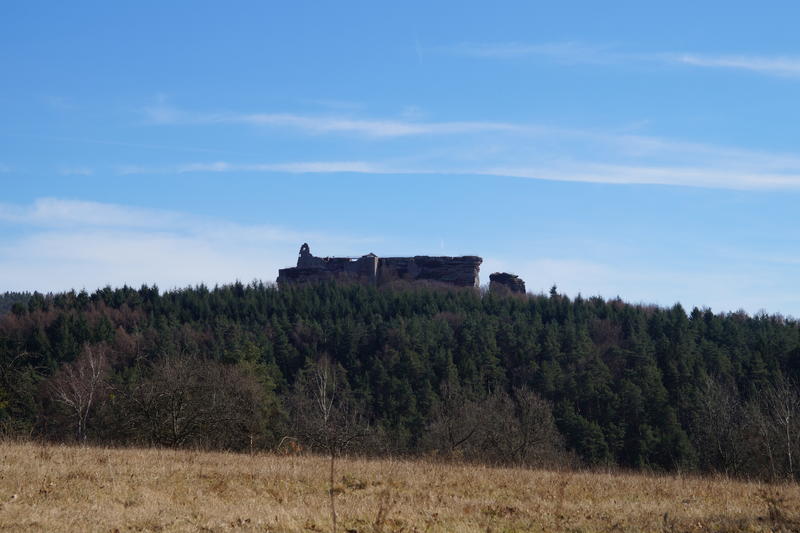 And directly ahead the Hohenbourg, (Castle on the heights) can be seen. 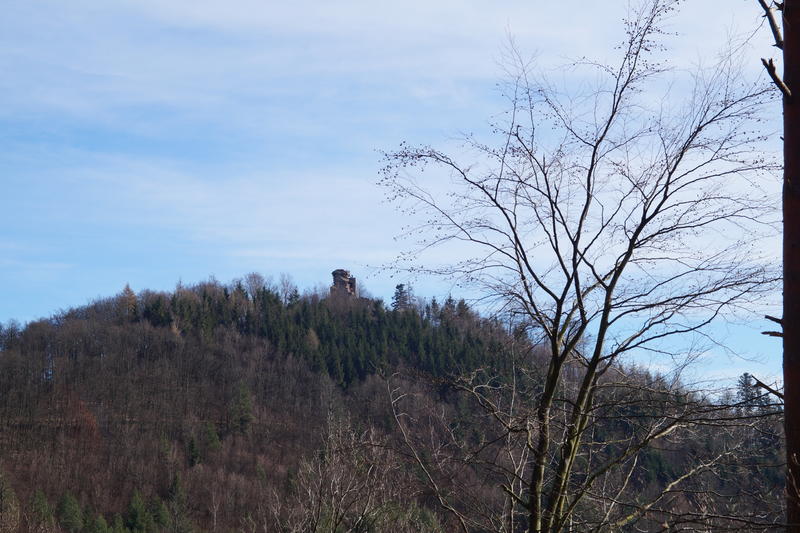 Starting to climb again, we have on of these stretches before us, that I do hate by heart. It is going uphill, with slight bends in the path. On every bend, you do hope, that the climb will finally end, but everything you see is another straight, going uphill, until the next bend.

What you do pass though, is a lot of lovely landscape like this rock. 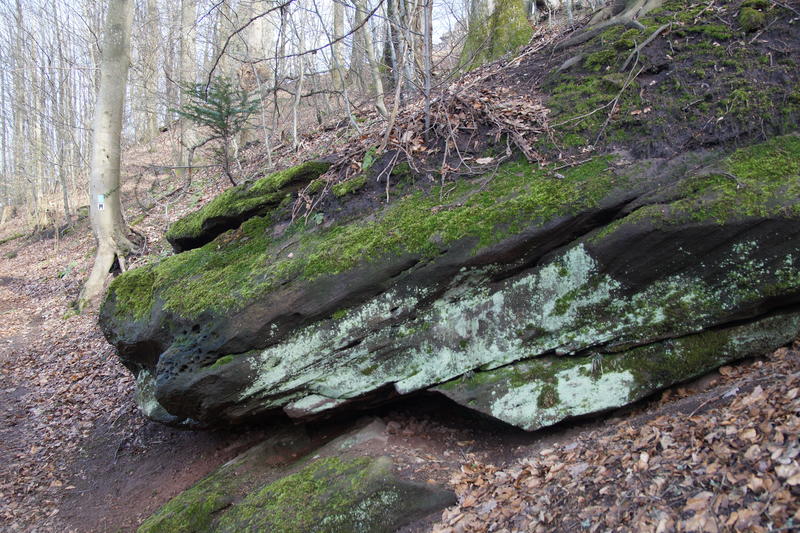 One of the problems of photography in this part of germany is, that the forest tends to get into the way.
As a german saying has it: You can't see the forest because of all the trees. 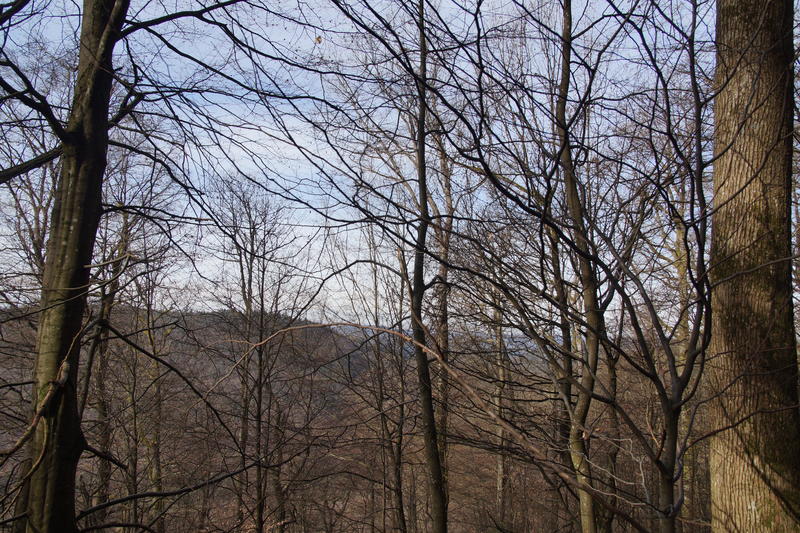 On top of the first castle ruin, the Wegelnburg, highest of all ruins in the area at 570m, there is a disc, describing everything that can be seen from this vantage point. 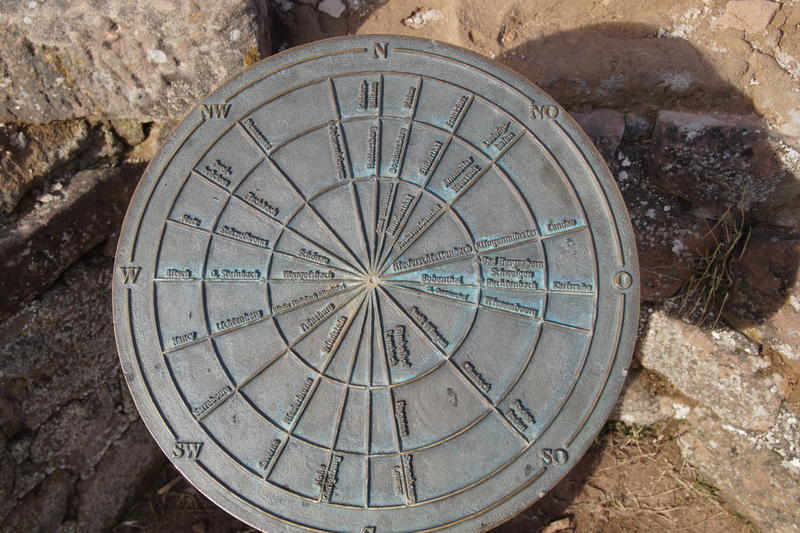 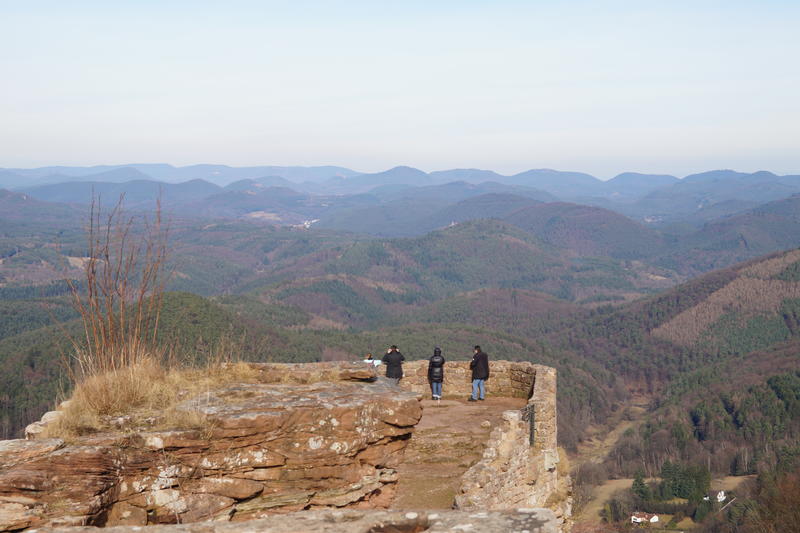 And seeing all the nice forestry hills like this: 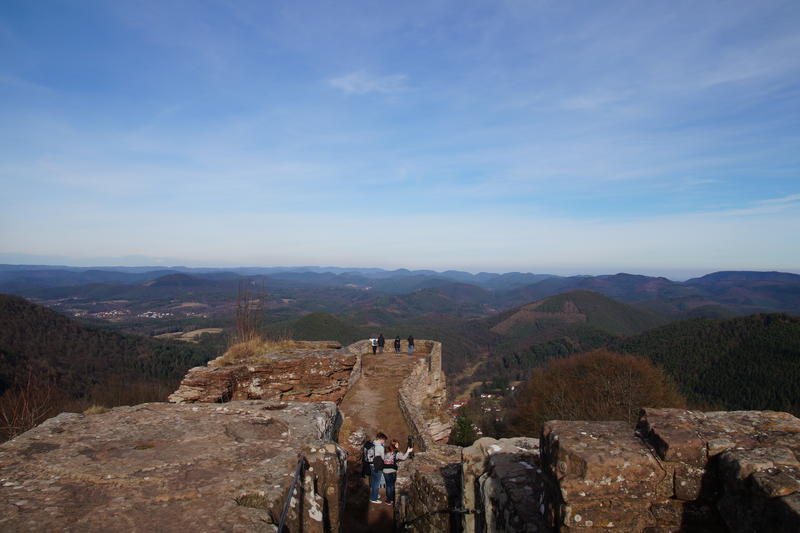 Close up, with sand stone rock 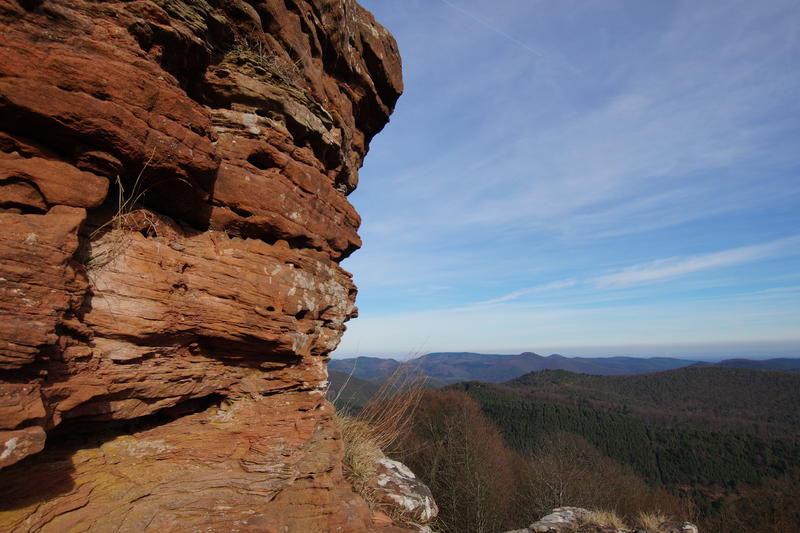 Nothweiler, the orignal castle village, in the valley , 300 m below, valuable because of a copper and iron mine, still used until the twentieth century 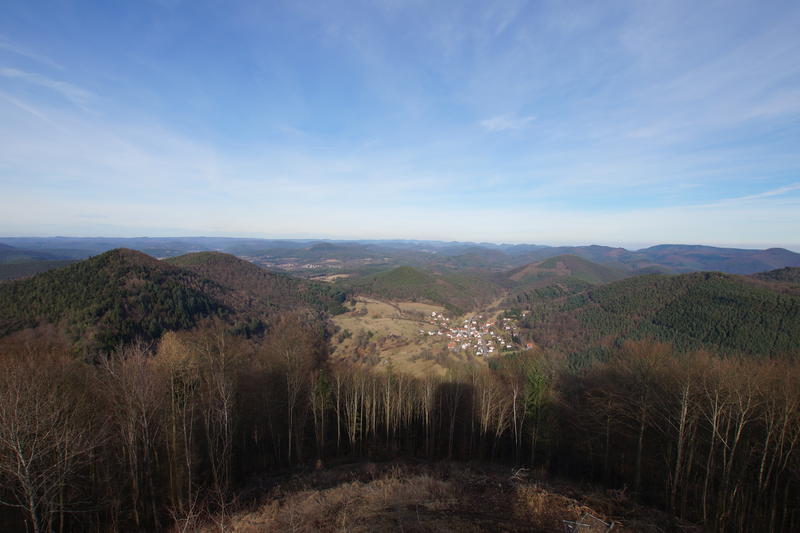 Sandstone cliffs in the distance 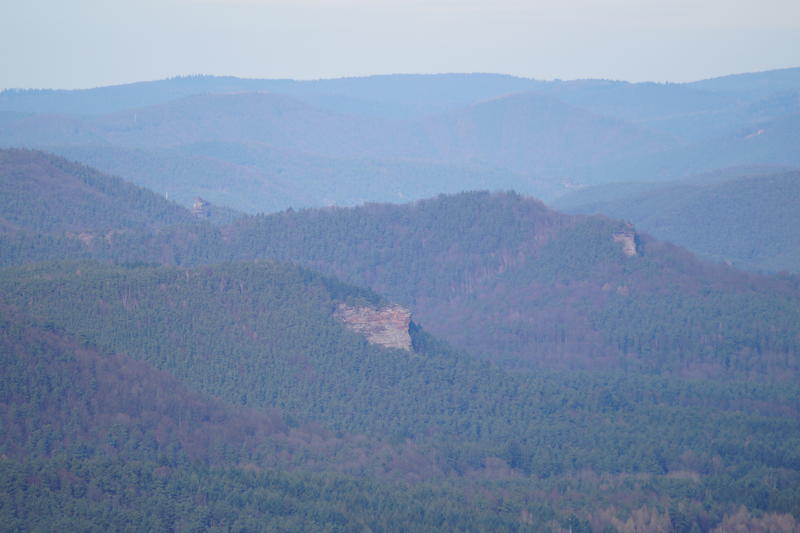 Even Castle Trifels can be seen in the distance. 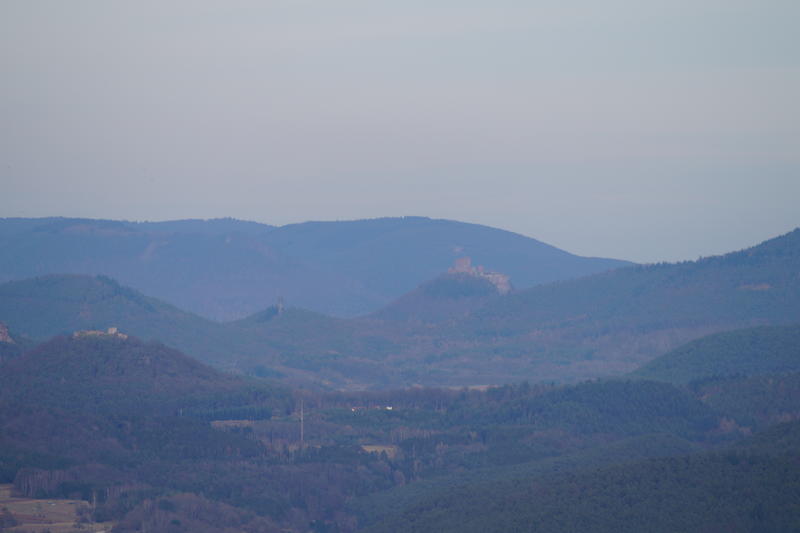 A more close up shot of Castle Trifels. 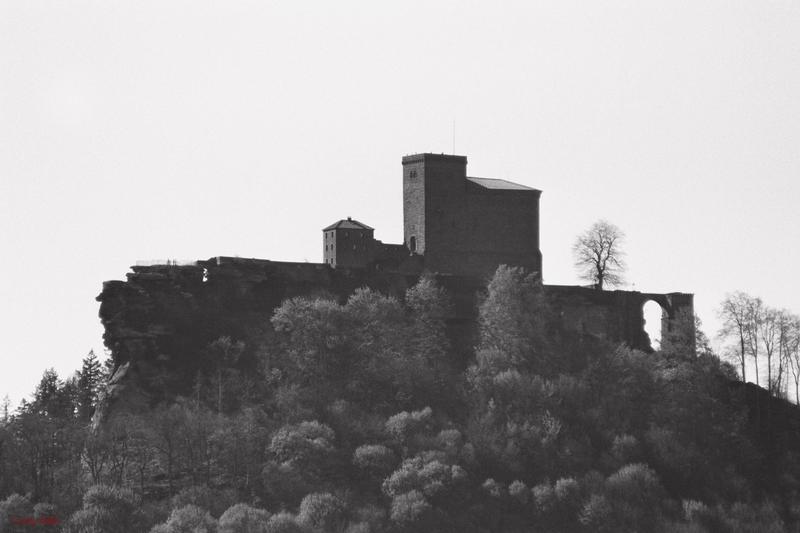 Don't be fooled, this castle was destroyed, too. What you can see here today, is a rebuild, started by the Nazis in the 1930s, because they wanted to use this as a platform for juvenile ceremonies,
By the way, this is the castle, where some king from an unimportant island nation was imprisoned, as far as I recall, his name was Richard Lionheart or something like that

As you can see the legend of Blondel riding around the castle singing for the king seems a bit improbable.

On the way down t the next "Bealach" 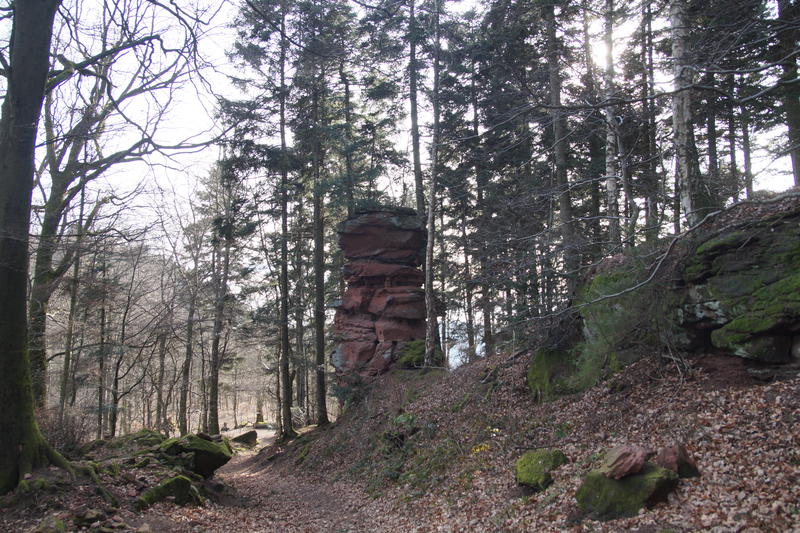 The Hohenbourg seen from below, you can climb to the top,of course. 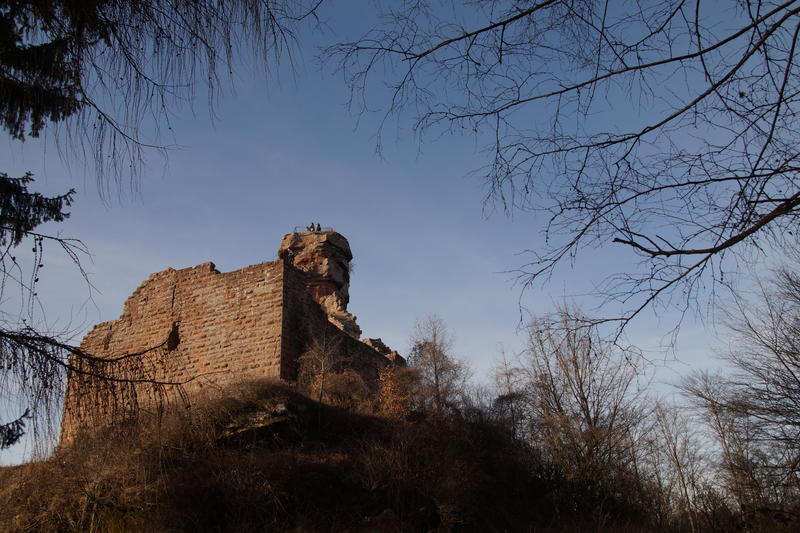 Castle Loewenstein( Lions Rock) on the same ridge, here there is only rock left... 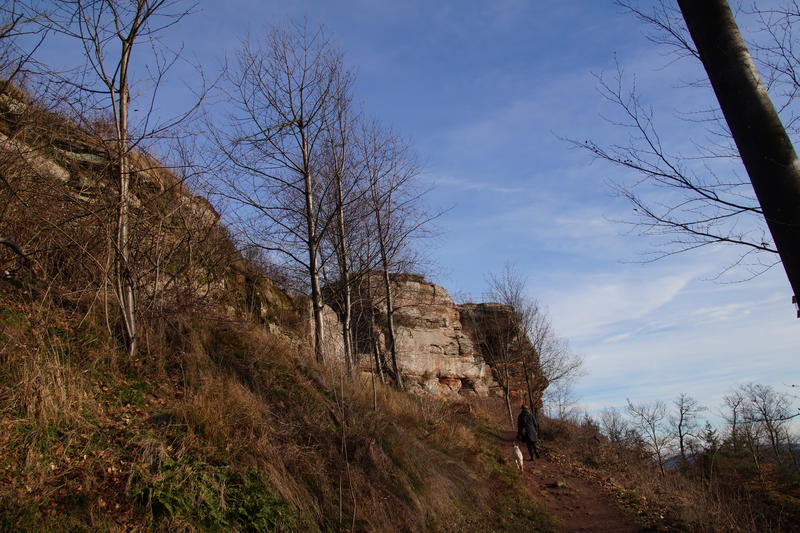 Lots of ladders to be climbed.... 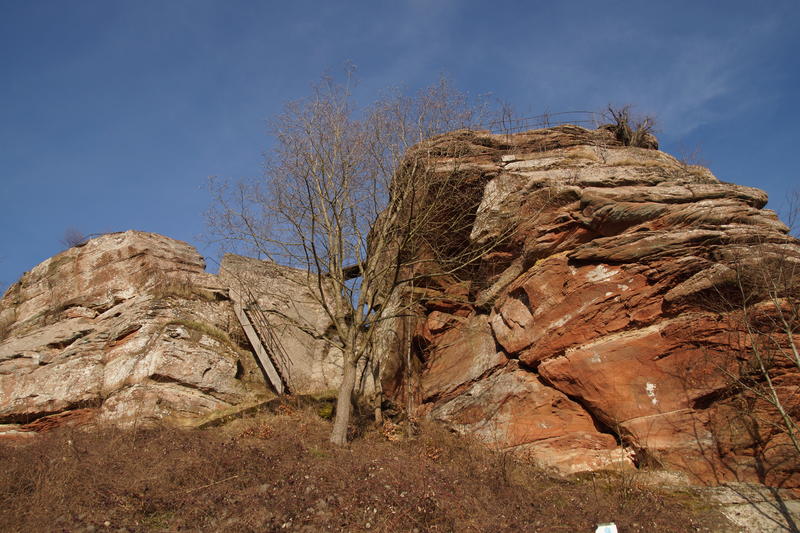 After that we climb down a ridge to Castle Fleckenstein, There are two possibilities, a bypass leading down on a comfortable way, or, a difficult path, just on top oif the ridge. This is difficult, mainly because of a problem, which is not well known in Scotland: Tree roots. The smaller ones can be quite slippery, when wet., 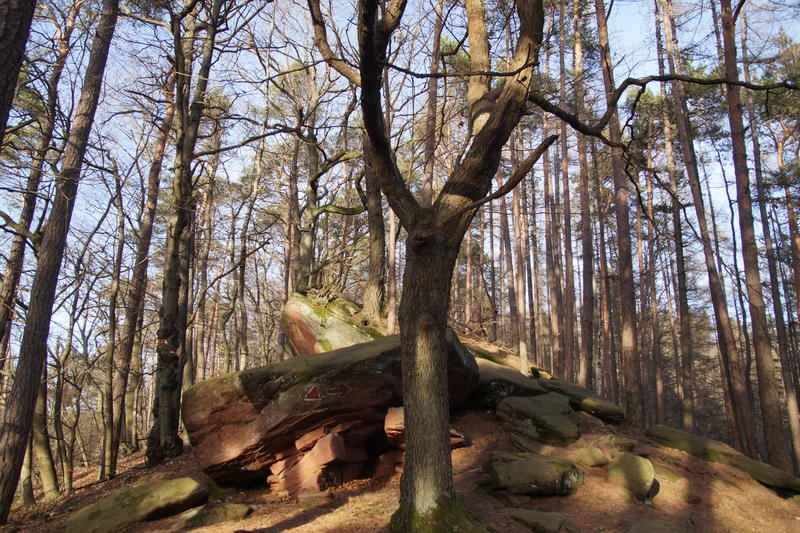 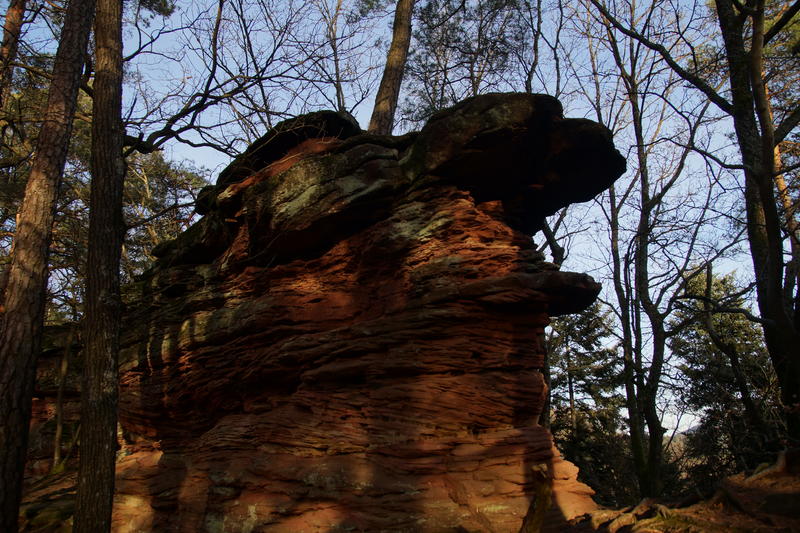 Rocks with a window 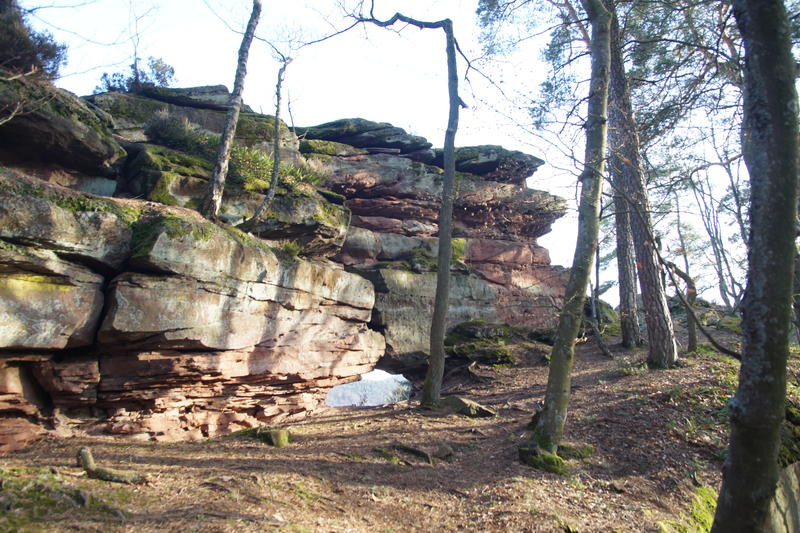 Sandstone towers on the way down 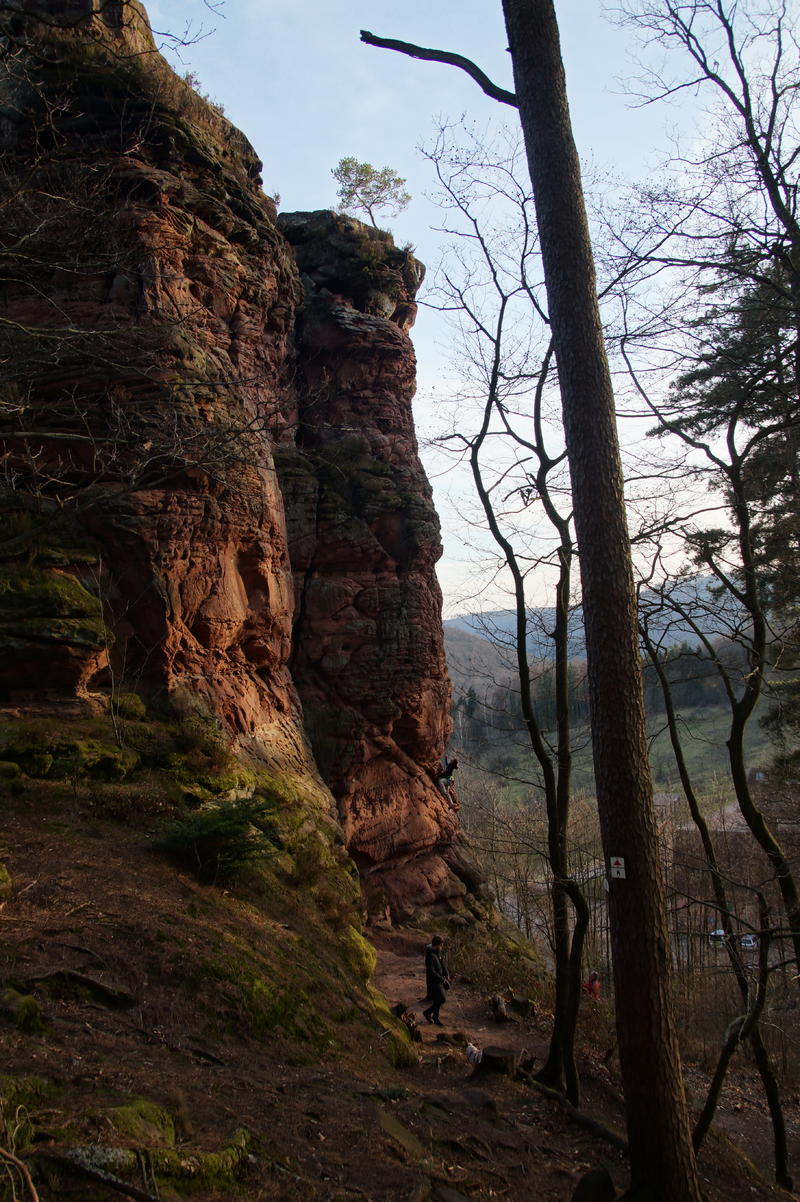 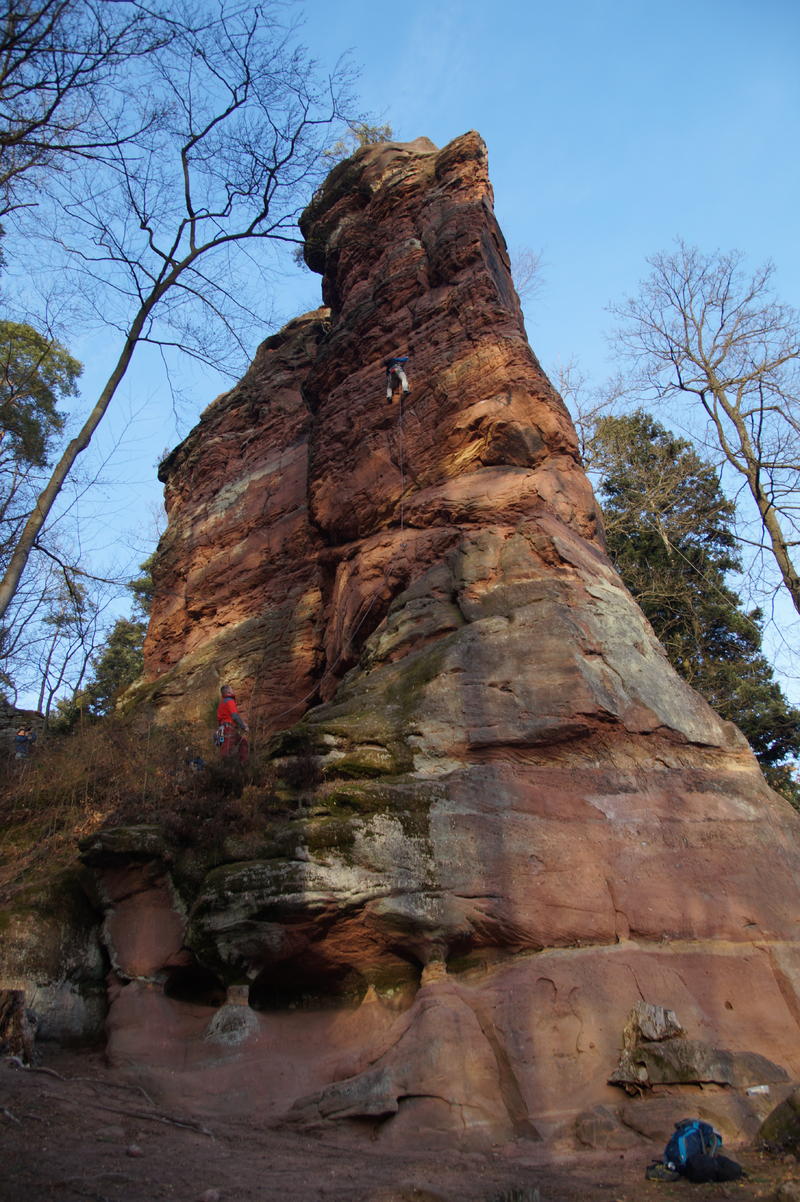 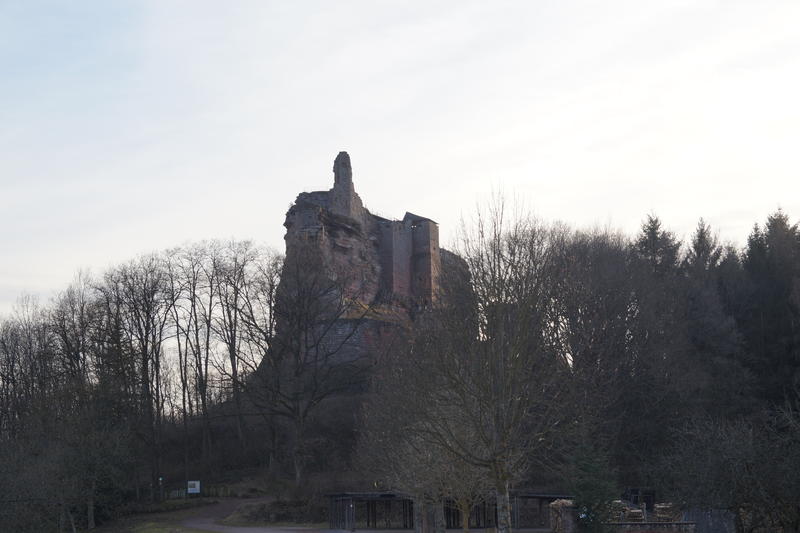 Fleckenstein castle from the front. 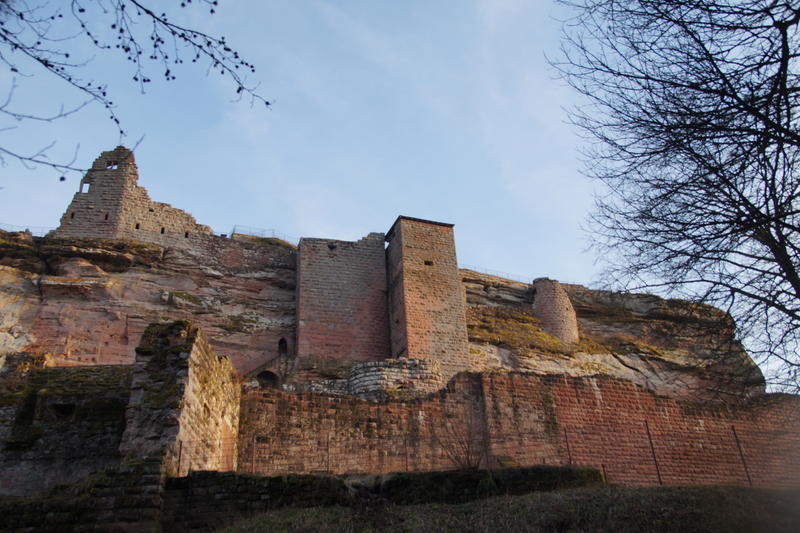 If you want to know what a castle like this did look like in medieval times:
http://www.burgenwelt.org/frankreich/flecken/ansi.jpg
Afterwards it is just a matter of a stroll through a lush forest down to the valley and back to your parking space.
The 4h are needed mainly because you have four castle ruins to explore, especially rewarding at Castle Fleckenstein, with secret passages driven right through the sandstone. This is the only one which requires buying a ticket, too. The others are free for everyone.

Re: 4 castles horseshoe at the german/french border

That's a fine hike I would enjoy myself, lovely area packed with history and wonderful old castles. The views from some of these were fantastic. It's interesting that in the UK we also have the saying "you can't see the wood for the trees"

Re: 4 castles horseshoe at the german/french border

Yes, this part of Rheinland Pfalz is really great. I've walked and cycled round many of the castles and through the surrounding forest (though not these).

I'm quite surprised that more mountain folk don't visit Germany - it's got some superb countryside.