The initial plan had been, over 3 days, to camp Coledale Hause,then onto Buttermere, camp Styhead, Esk Hause, Angle tarn, Stake pass and then with a high camp a return via High Raise, Ullscarf High Seat and Walla Crag. I,m doing the Hebridean way in august and needed to get some mileage carrying a pack

Because Day 1 was a very short walk, about 1 1/2hr at the most it was a late start and a drive over around 3pm. It would be beneficial anyway as it was a hot day so I intended to start walking around 6pm. Got to Keswick around 5pm and went to the chippy in the market place so I didn't have to carry food for the evening. Also had a visit to Costa as I'm addicted to the large latte at the minute!. Filled up, I drove around to Braithwaite and parked up in the car park at the start of the mine track. As the car would be there for 3 days for the first time in my life I left a note in the dash tray re backpacking till Thursday. All kitted up and bag packed for 3 days I started walking just before 6 pm. the track is an easy walk in and the gradient barely noticeable. I got to the mines area in around 45 mins and began the walk up the track towards Coledale Hause. The wind had began to pick up and I began to question camping up on the Hause itself as there is no shelter. I got to the top of the first rise in about 20 mins and began to look for a suitable camping spot. the area was fairly boggy and I settled for a hollow right next to the stream. I was using the tent for the first time since a flysheet zip replacement and found myself being ultra cautious when pitching Tent up the stove was on as I settled in for the night on what turned out to be surprisingly cool. 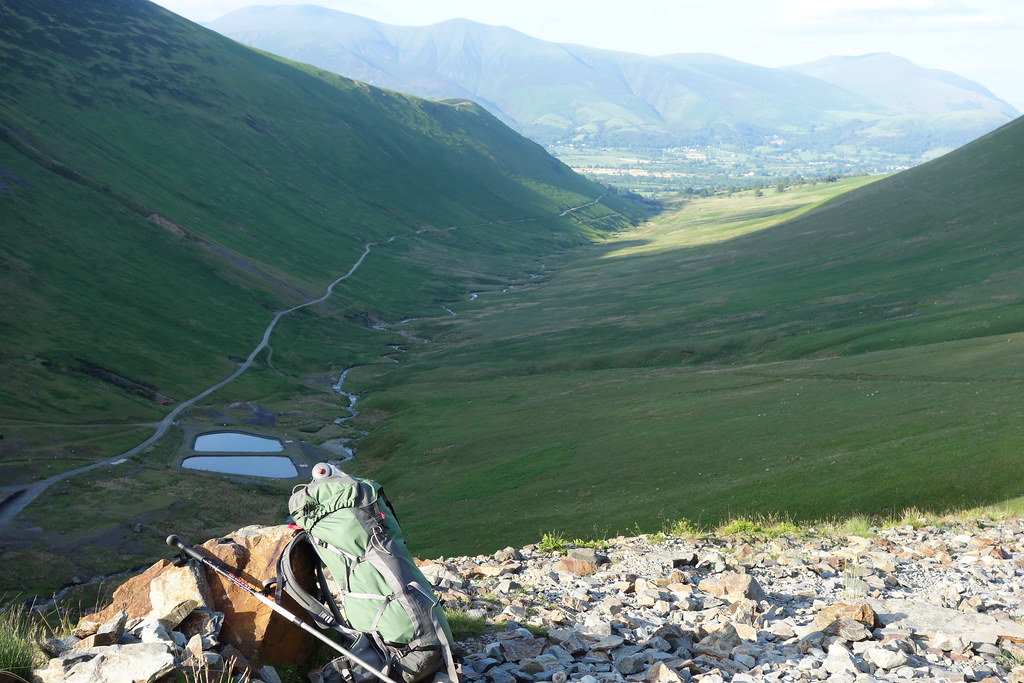 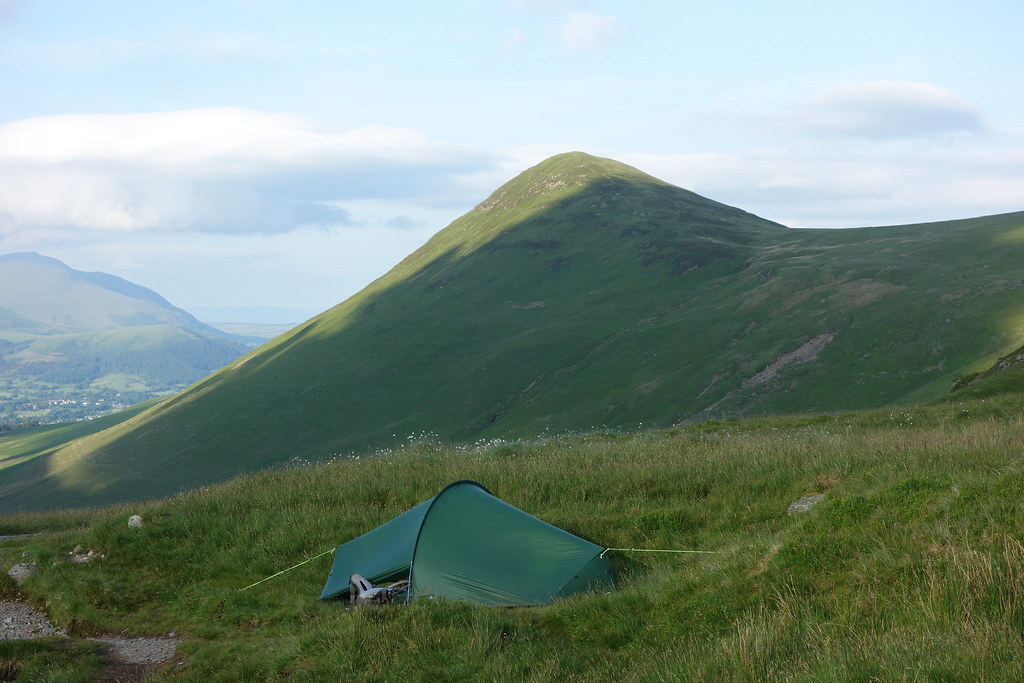 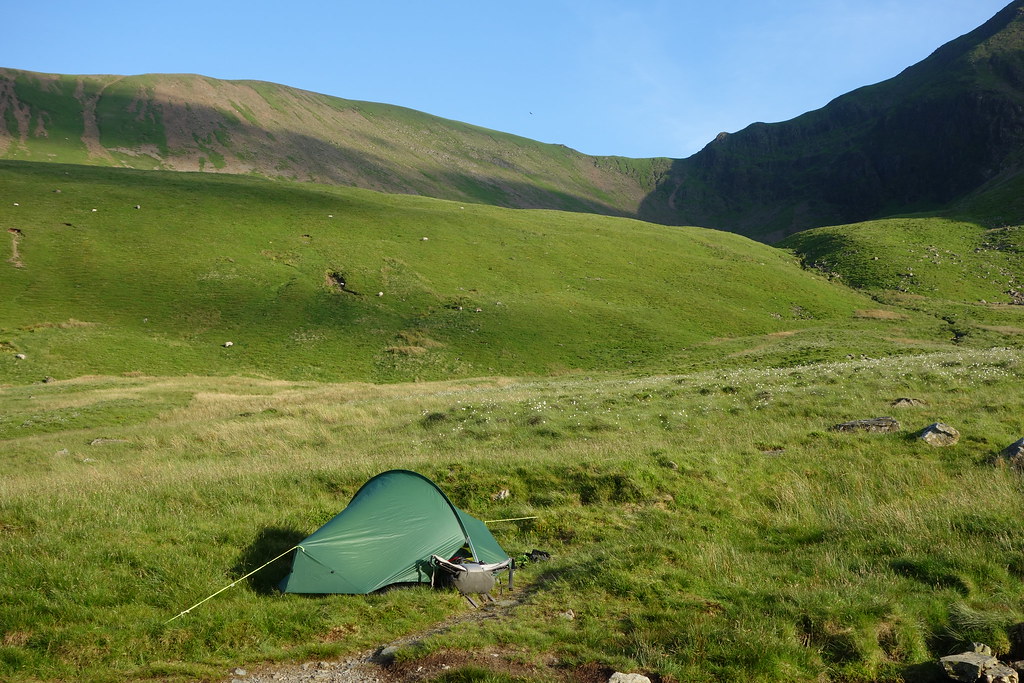 Up at 7am with sun streaming into the tent making it too warm even at that time. Looking across Derwent Vale I could see low clouds hanging around. I later learned from others that there had been a fantastic inversion between 4.30am and 6am. Todays plan was such that I make it as short or long as I wanted. I had a couple of options, a camp on Haystacks or camp at the head of Ennerdale. As it turned out I did neither as those options would have been very short. Walking from 8.30am I was up on Coledale Hause before 9am with not a soul around. A change to all my other trips in the area I didn't go onto any of the hills but headed for the col between the paths to Grasmoor and Crag Hill and then headed over to Whitelees Pike and took the descending path to Buttermere. Getting to the village I took the option of getting out of the sun for a while and went into the café for a coffee break. My backpacking style is changing. In younger years I would avoid longer stops and instead plough on in order to get the route as quickly as possible. Maybe its age!
Break finished I took the popular pedestrian highway that the Buttermere lake shore path. Its got to be one of the most popular walks in the Lakes. I was pleased to get to the rising path up Scarth gap and on top took a further break to consider my options. I had decided to go to Styhead tarn to camp and was deciding whether to go up onto Haystacks and Moses Trod or drop into Ennerdale and ascend to Windy gap from the valley end. Haystacks was the better option so continued on. Haystacks is a great little walk, surprises around every turn and the whole walk is a great viewpoint for the surrounding areas. From Haystacks I joined the path that connects to Moses Trod and then continued over the fellside to reach the path that ascends to Windy Gap By the time I was windy gap it was getting on for 4pm and the hills were empty. From there I dropped down to Styhead Tarn and walked around to the back of the tarn to get any shelter at all from winds that were predicted overnight. 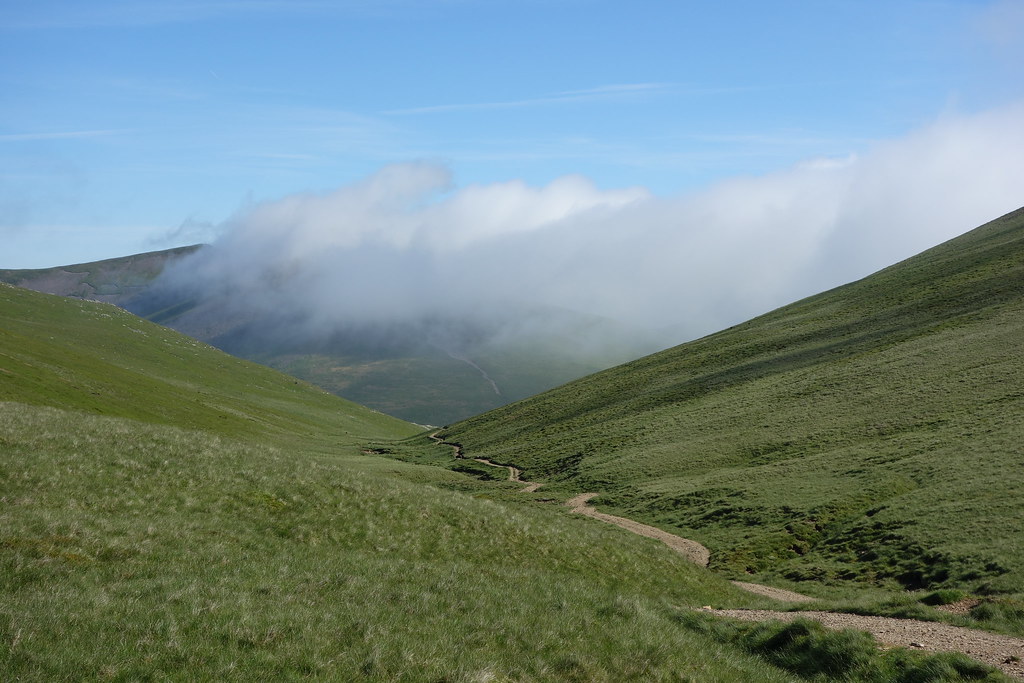 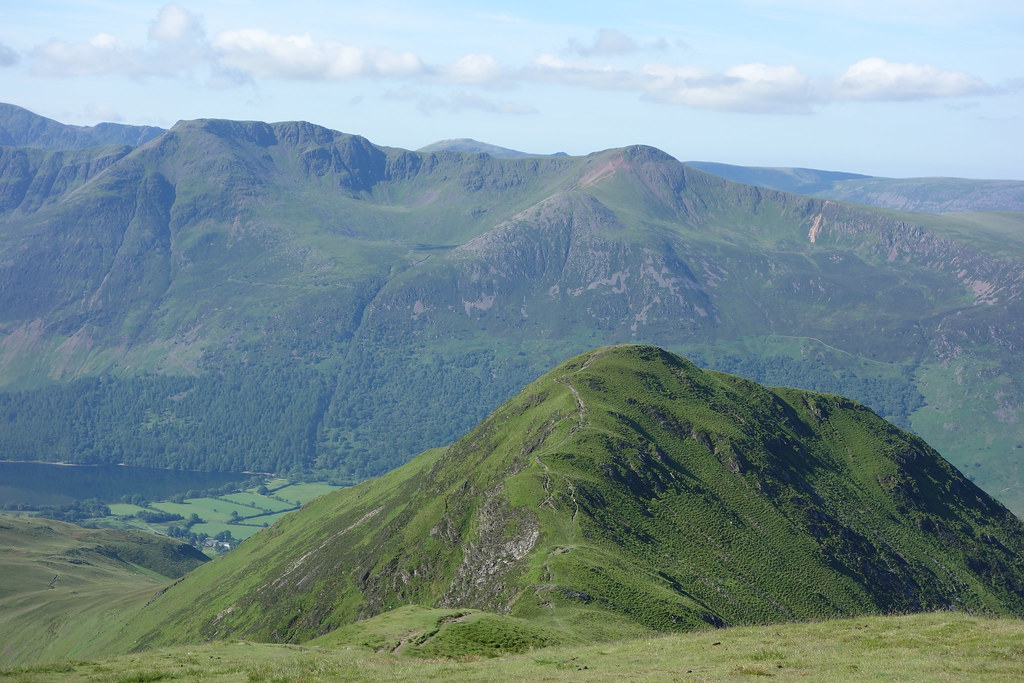 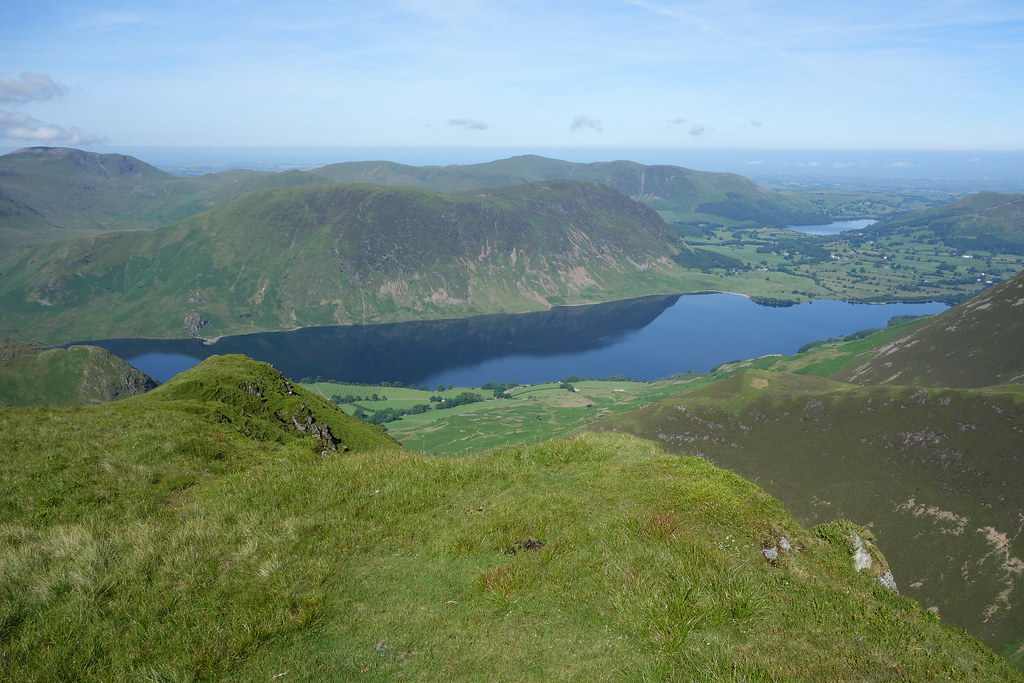 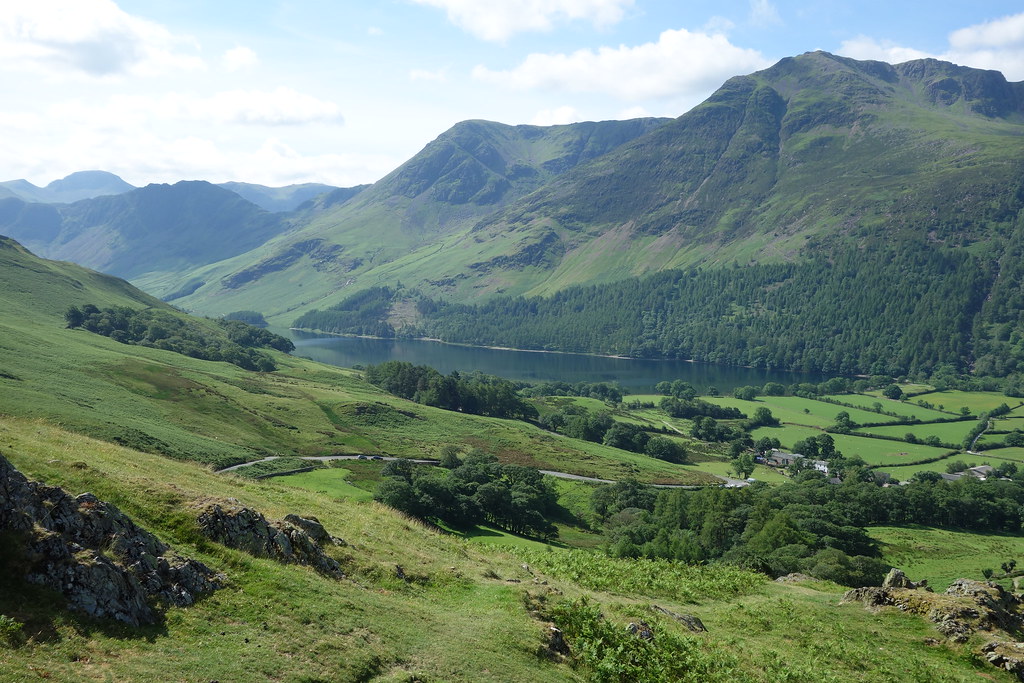 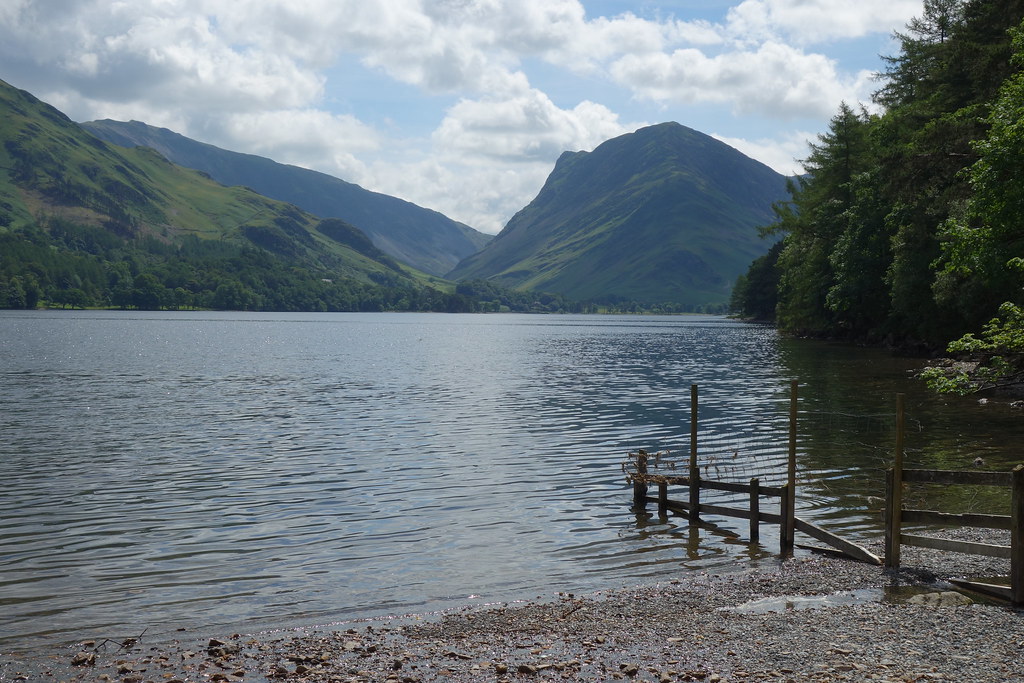 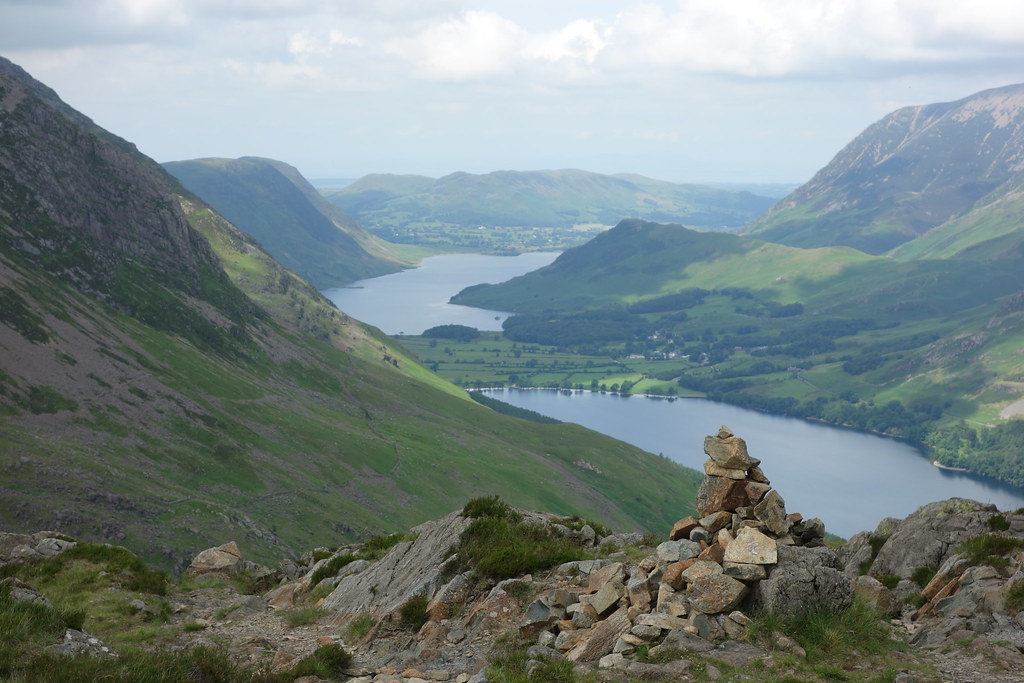 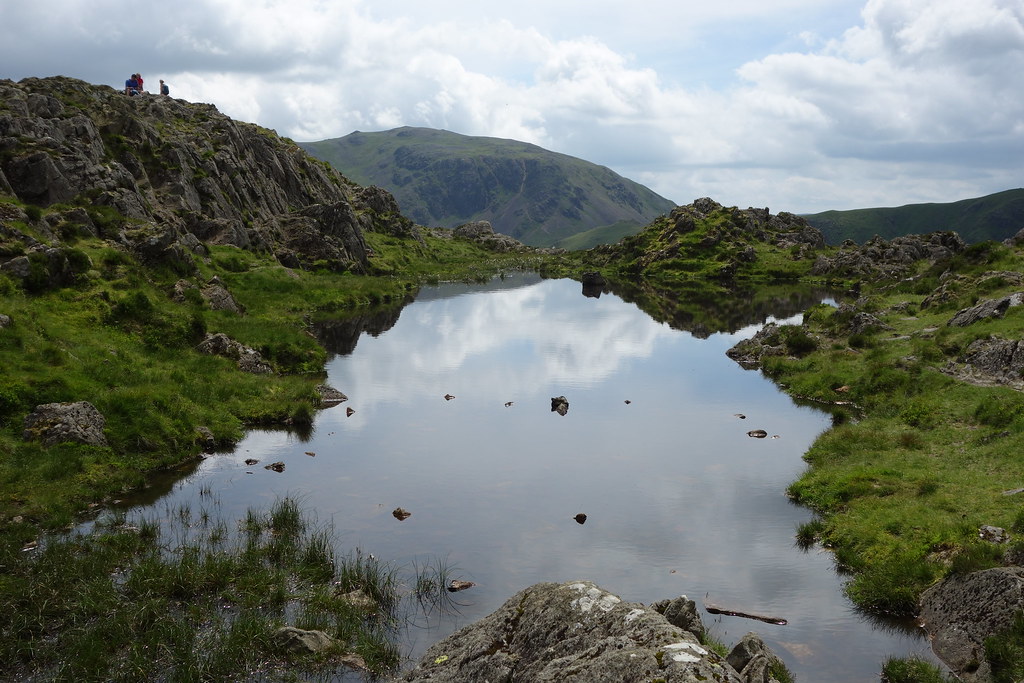 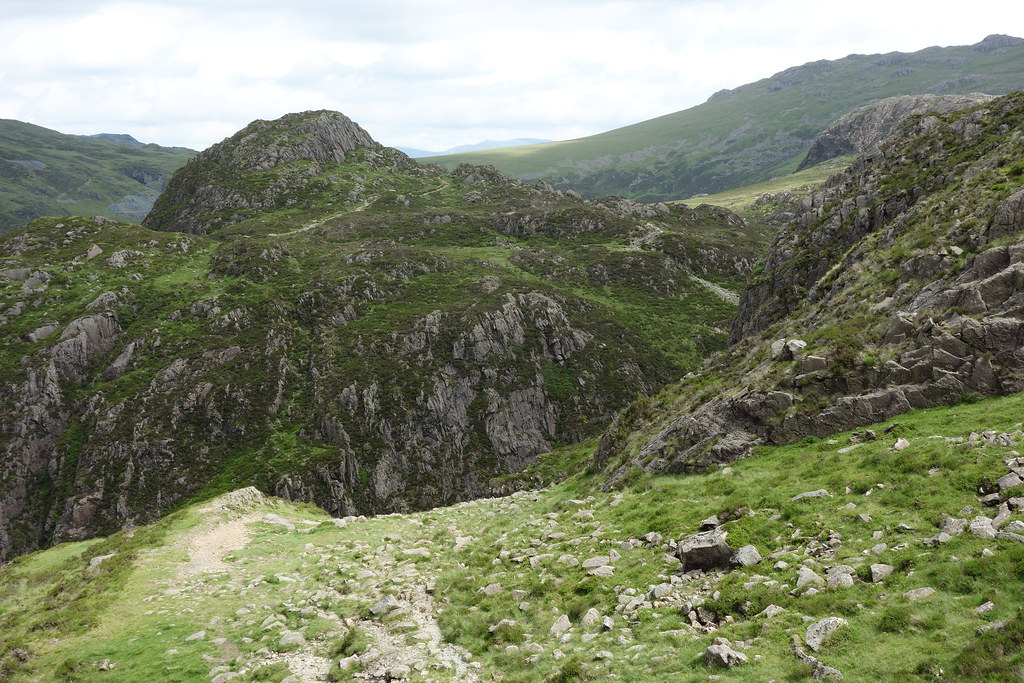 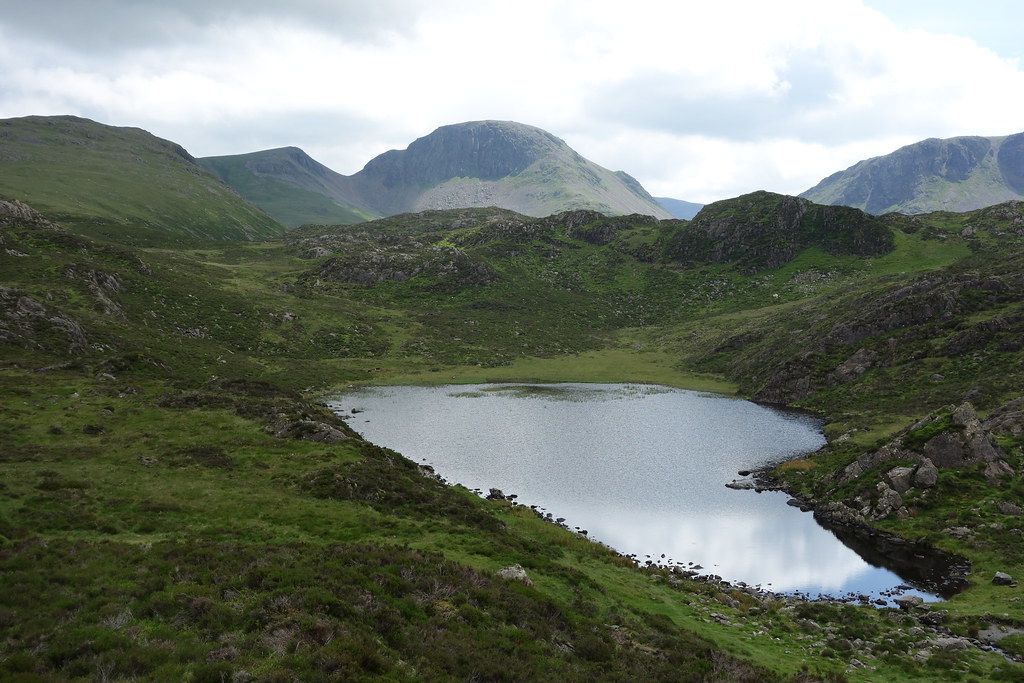 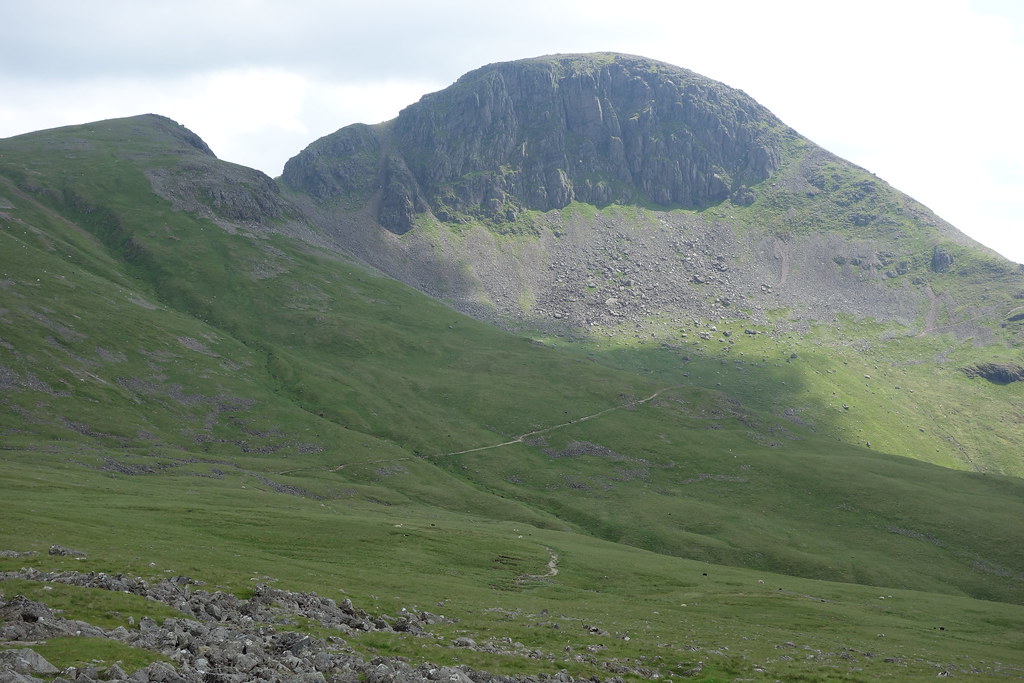 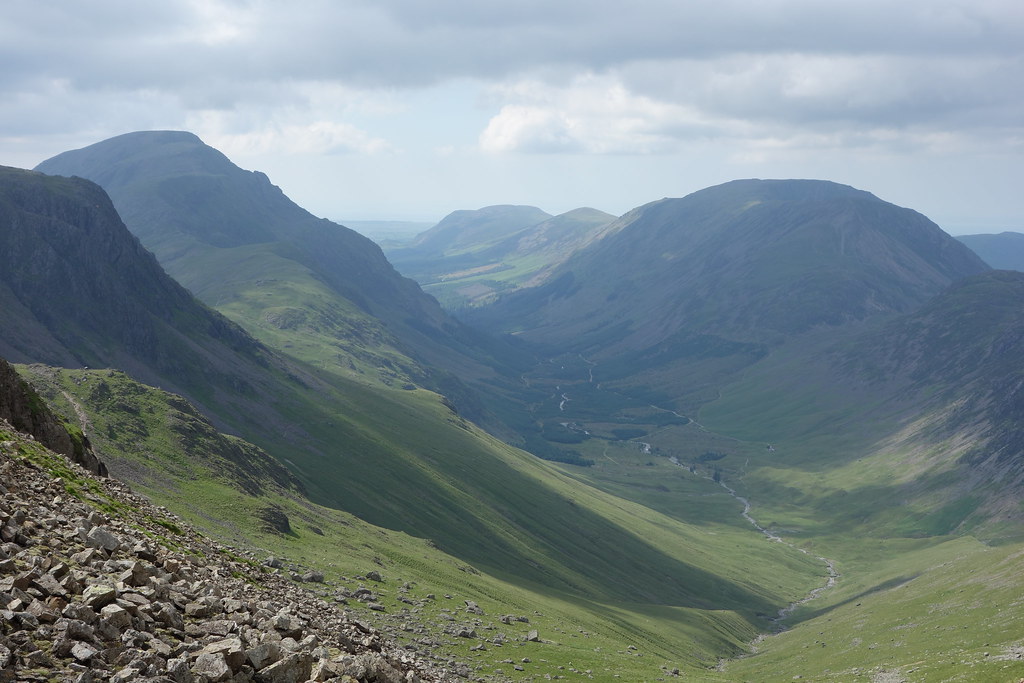 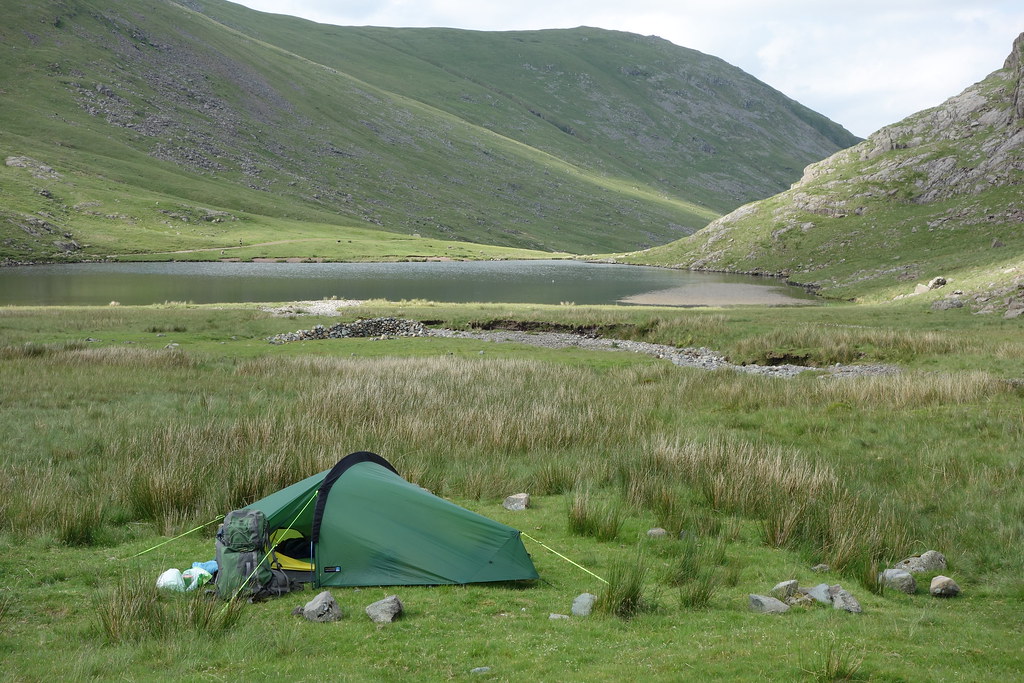 The weather had changed. It had been windy overnight and had rained. It stopped raining around 8am and I hung around until 9.30am before walking. There were two other tents there, the occupants having the same idea. Low cloud hung around the hills and the winds were fresh. I knew I was walking to the top of Stake Pass so had until then to make my mind up. Took the track up to Sprinkling tarn and into the low cloud and then continued on to Esk Hause. Used the shelter at Esk hause due to the biting winds before continuing onto Angle Tarn and then over to the top of Stake pass. My planned route lay off to the right and higher up into the clouds. It was beyond midday and there was no sign of the weather improving. I didn't fancy the idea of pointlessly walking in the thick cloud and cold wind and also camping high so took the option of dropping down into Langstrath and walking part of the Cumbria Way up to Stonethwaite. As I was walking through the valley sure enough the weather changed, the clouds cleared, the sun came out and soon enough it became unbearably hot. I considered my options again. It was too early to camp and to walk back up to Braithwaite would probably be about 3 hrs I got to the main road in the valley and checking the bus timetable saw a bus was due soon to so took the easy option to Keswick leaving a 2 mile walk up to Braithwaite and back to the car. Now having a free night I went onto the campsite for the night.
The next morning was rain and low cloud, maybe I made the right decision in not camping high. 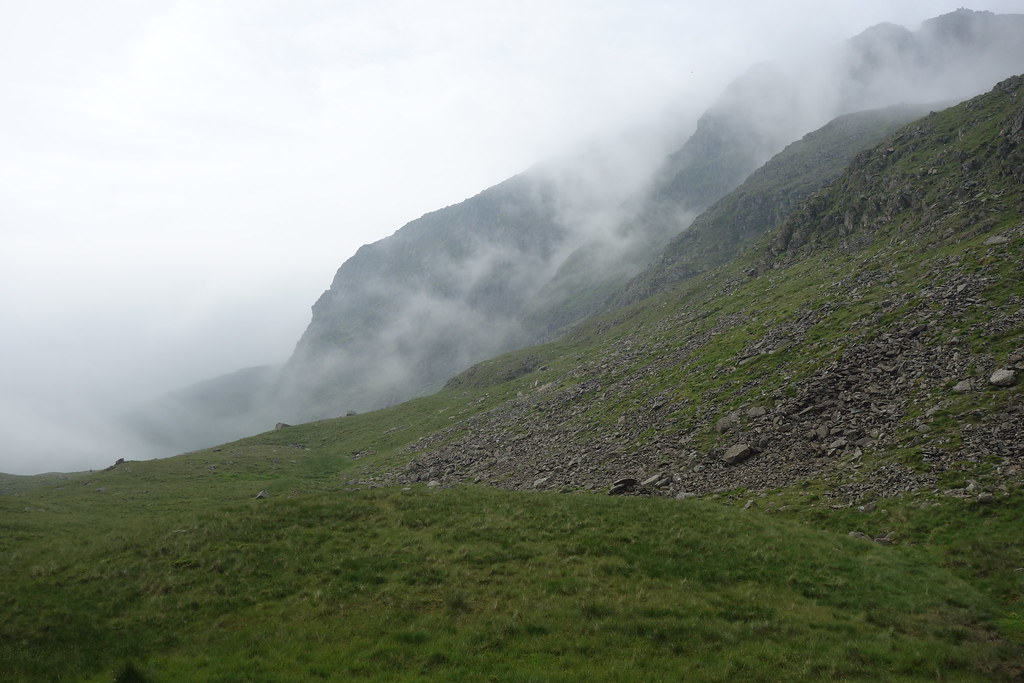 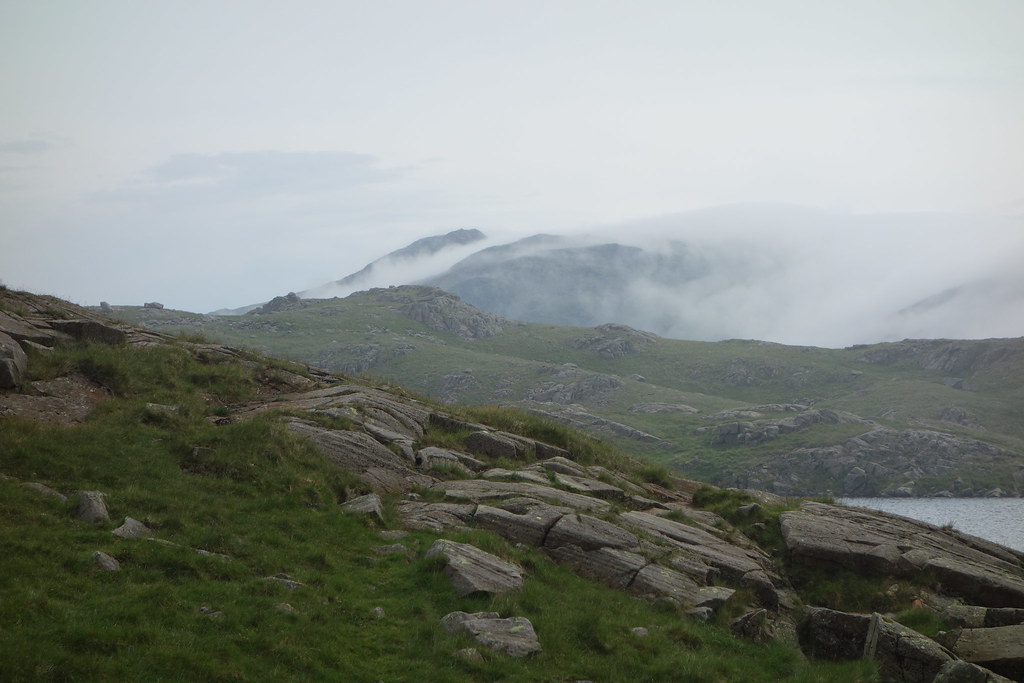 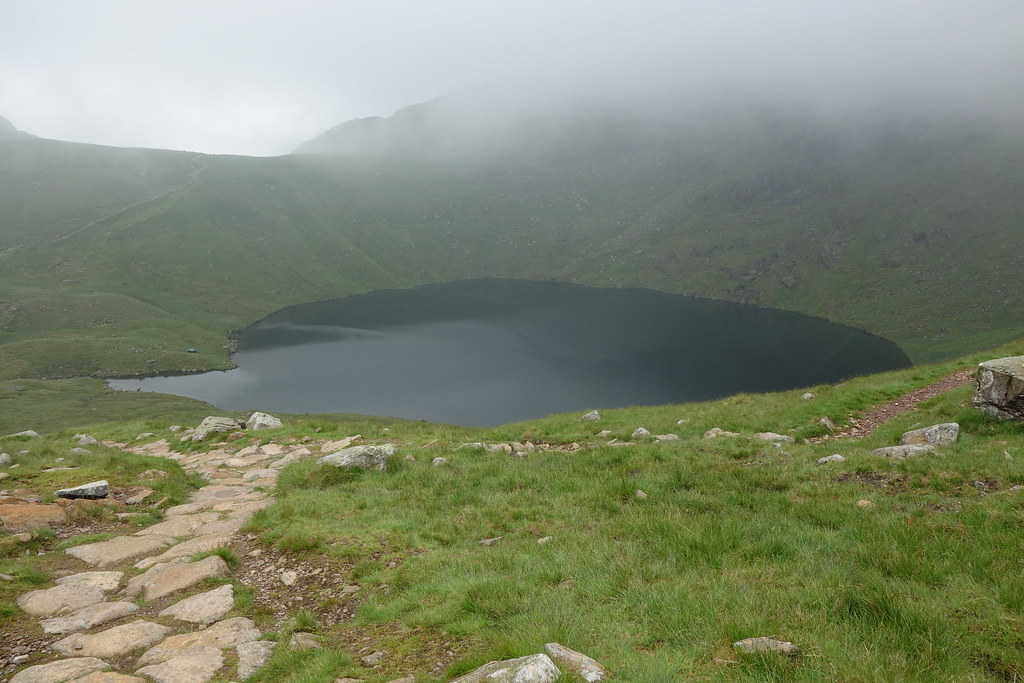 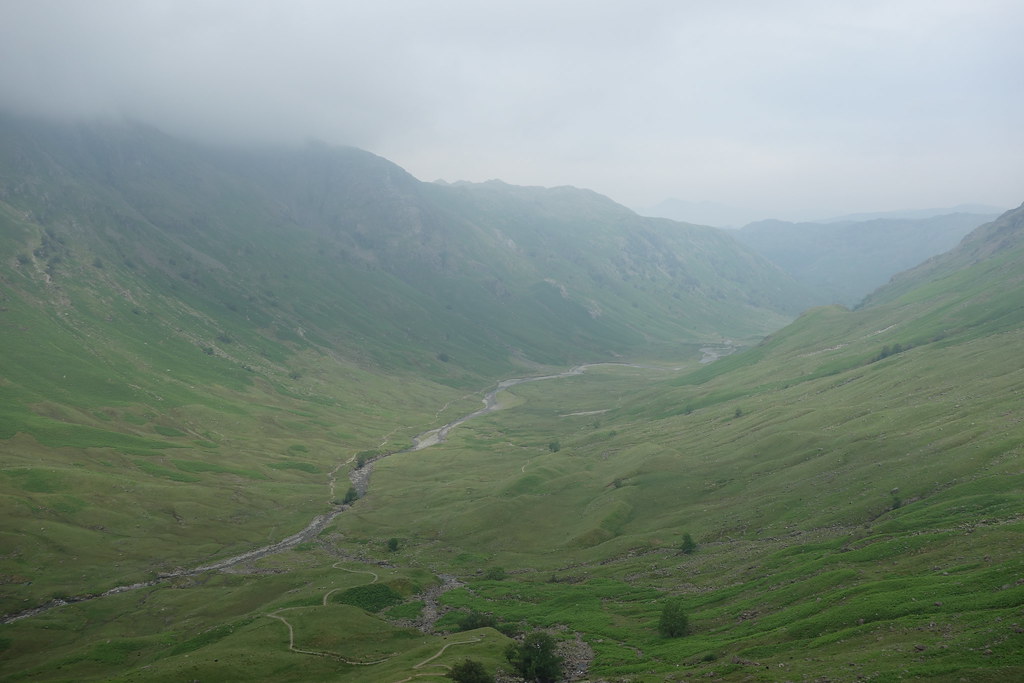 Looked a great little backpacking trip GM. Haven't been backpacking for years, but seeing the pics of your tent nicely pitched makes me want to set off for a few days!

Some lovely shots in your report too

dav2930 wrote:Looked a great little backpacking trip GM. Haven't been backpacking for years, but seeing the pics of your tent nicely pitched makes me want to set off for a few days!

Some lovely shots in your report too

Thanks for that Dav, love backpacking!!

and well done on a decent walk