Helen has family in Canada, and on our most recent visit we took the chance to have a free stopover in Iceland en-route with Icelandair (who now fly from Aberdeen to just about everywhere in North America with a Reykjavik change).

So we were looking for a wee trek that would fit easily into the max 7 night stay, whilst still allowing a spare day in case things went wrong! We were very keen to visit geothermal areas on the walk, so Iceland's most well known backpacking route - the Laugevagur trail - was the obvious choice. The trek starts from Landmannalaugar, for which buses leave Reykjavik early in the morning. The first half of the 4 hours 30 journey is on normal roads, after that it's rough landrover tracks with deep fords - not accessible to normal cars. 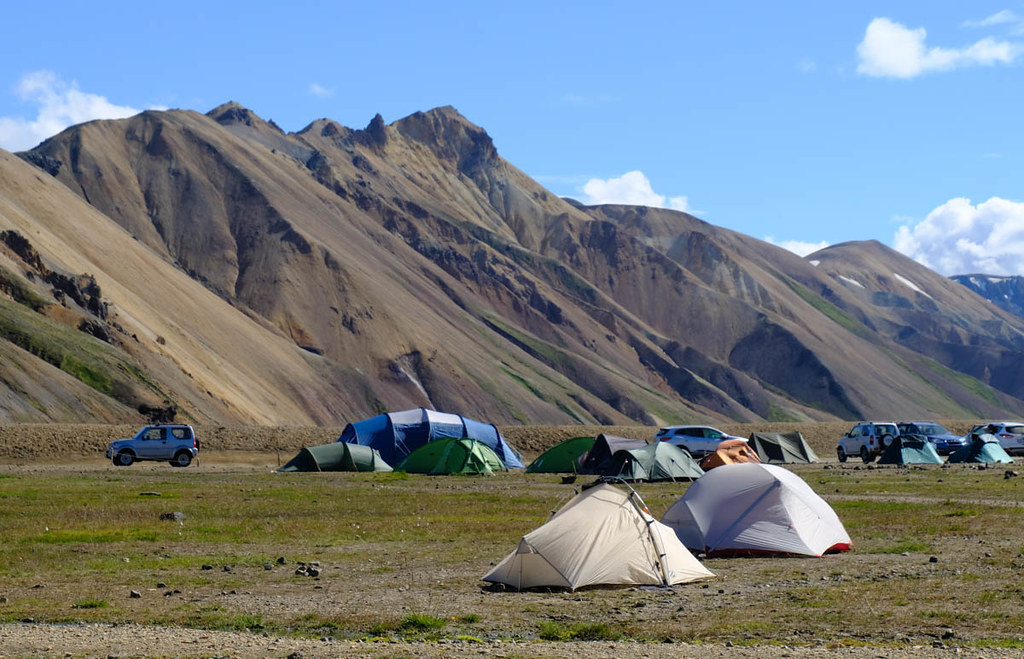 On arrival at the very, very busy Landmannalaugar camping ground (and wee hut) many people set off on the trek, but we wanted to visit the hot springs here in the evening, so on this first afternoon we did a day walk from Landmannalaugar. The steep ridge of Suðurnámur looked the best option, avoiding too much overlap with the next day's hike, so we pitched the tent first - you've a choice of stony ground and weighing down pegs with rocks, or grassy but wet areas. Camping is around £20 a head, which doesn't include showers, but if not camping even using the overcrowded loos cost about £4 - I highly recommend bringing all your camping food from the UK 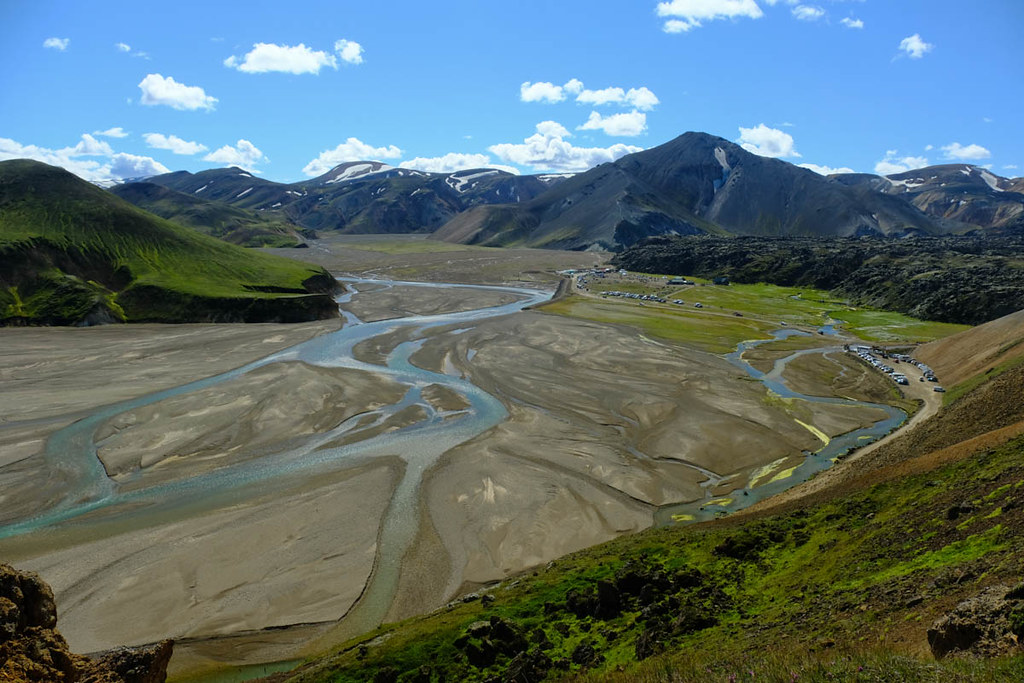 After backtracking along the landrover approach track, the walk - well marked with posts - goes off and up to the left. There are soon good views back to the campground, dramatically set at the foot of a lava flow. 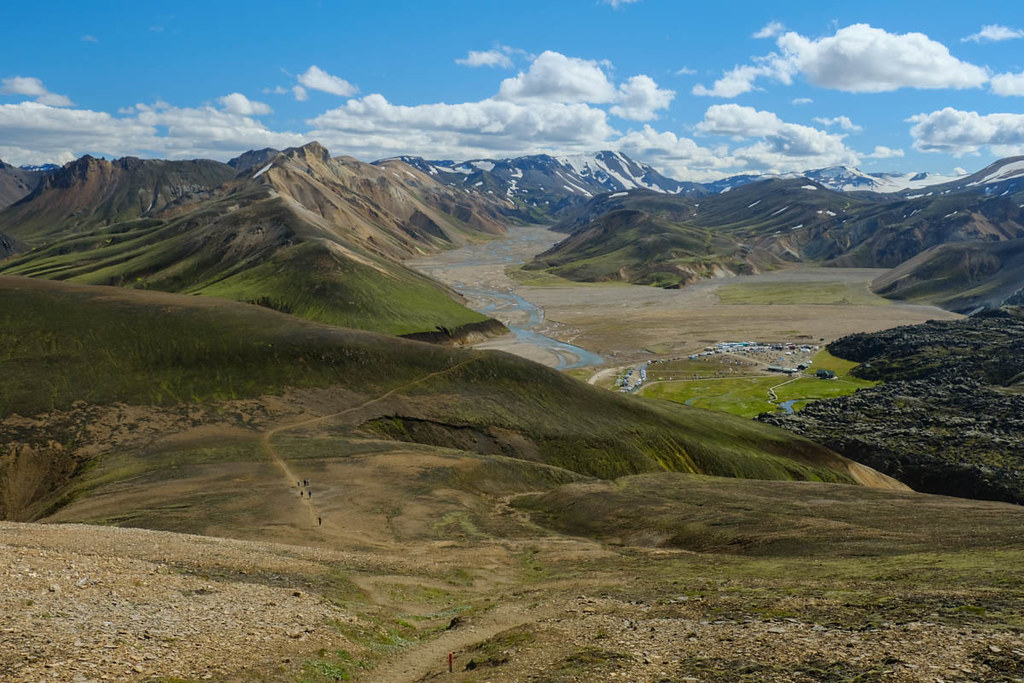 After a short initial ascent there is a flatter section of ridge and wee cairn. 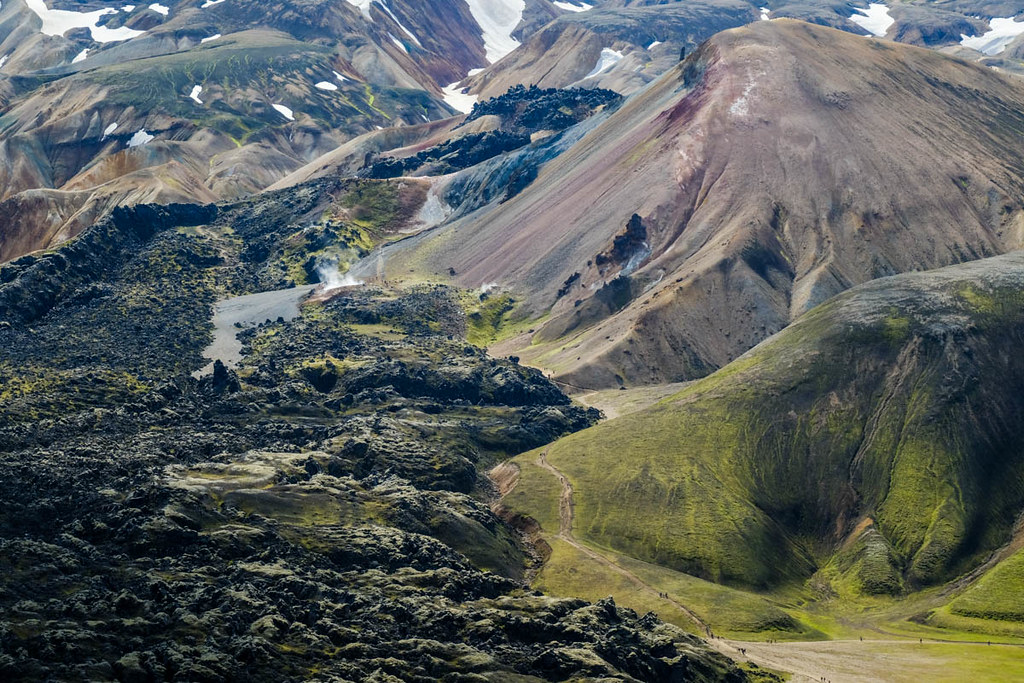 Looking south we could see many hikers setting off on the Laugaveguar trek we would be starting in the morning - along the edge of the lava and past some steaming hot spots. 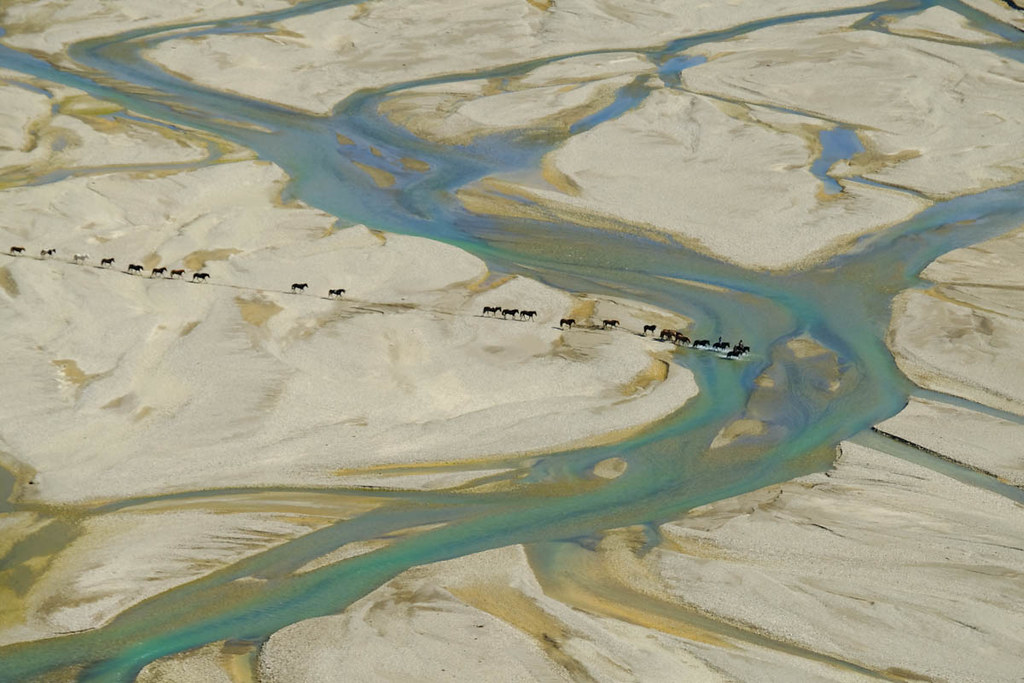 We also watched a large group of horses being led across the glacial river bed. 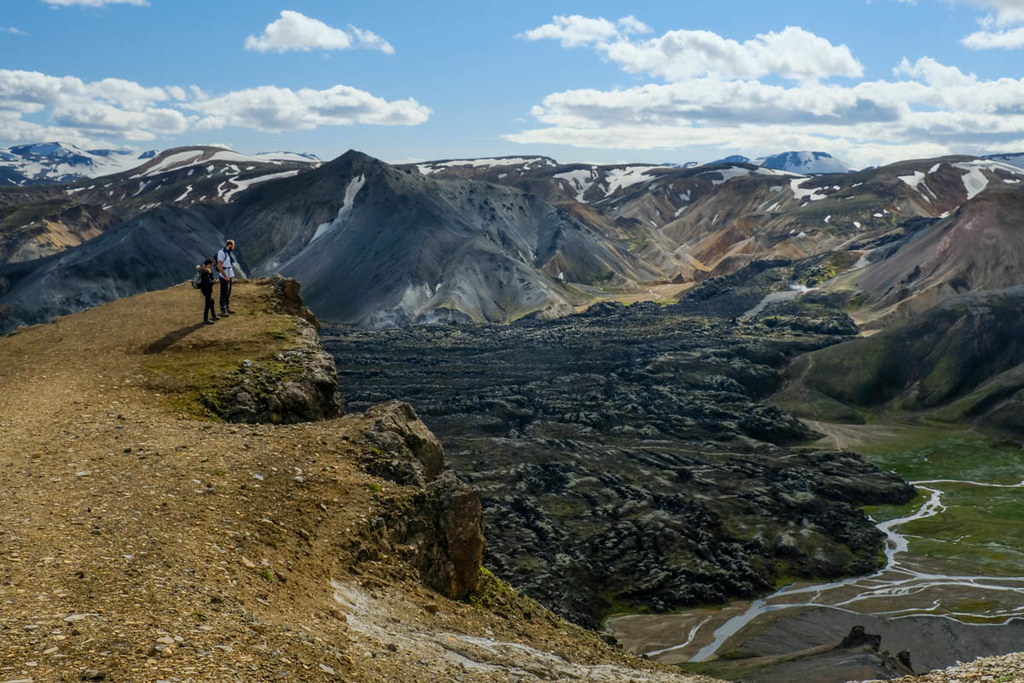 The path then climbs again to a rocky summit ridge. The views from here were sensational - I've never seen a landscape that looks anything like this before. 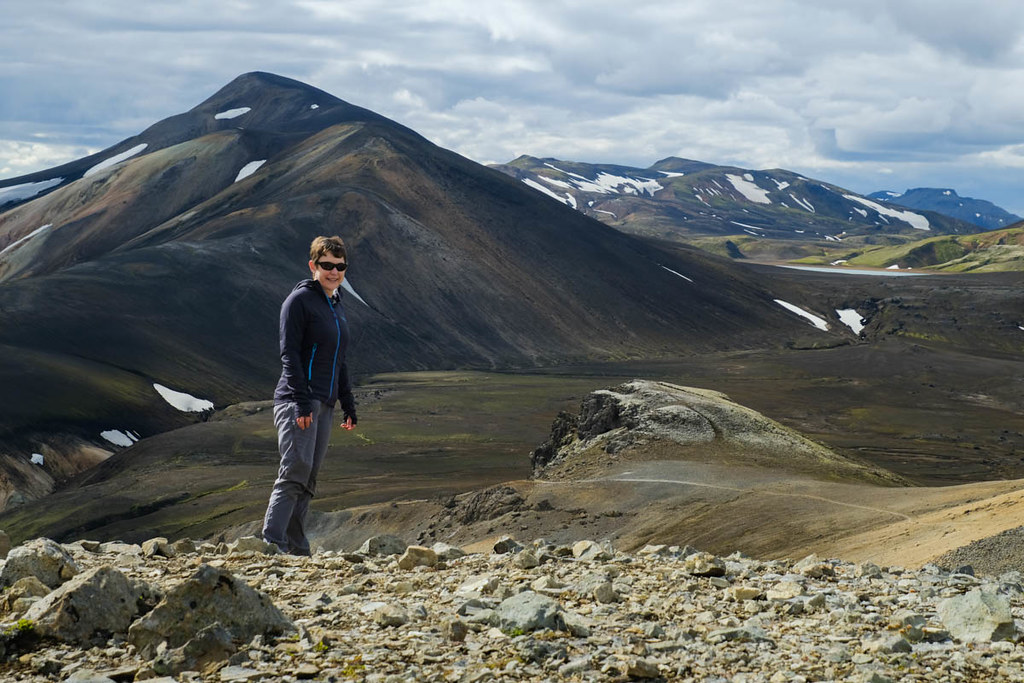 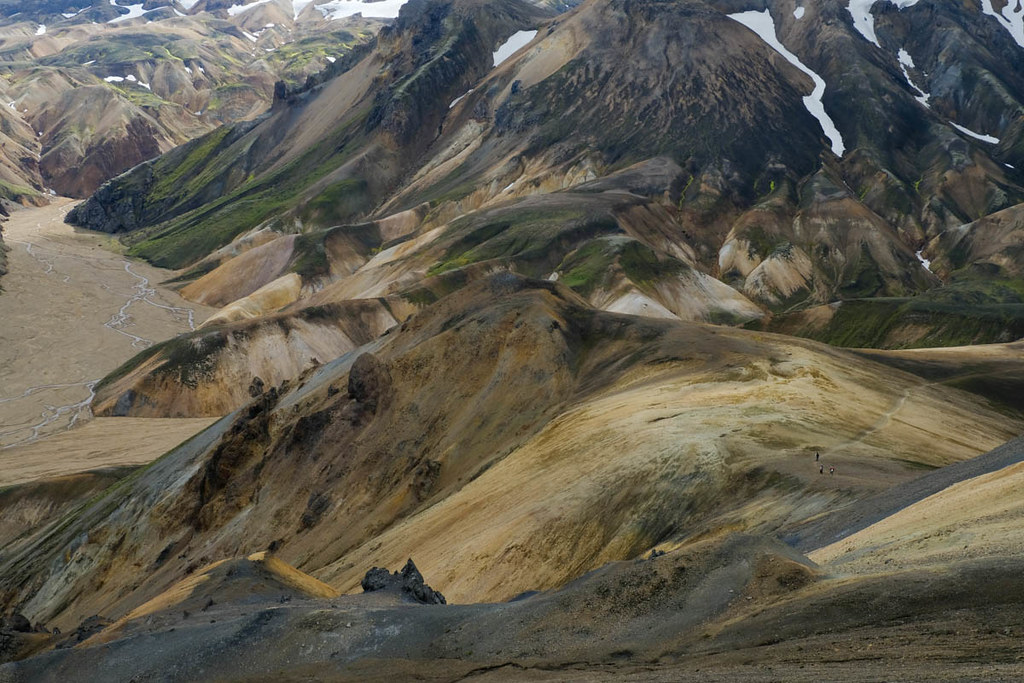 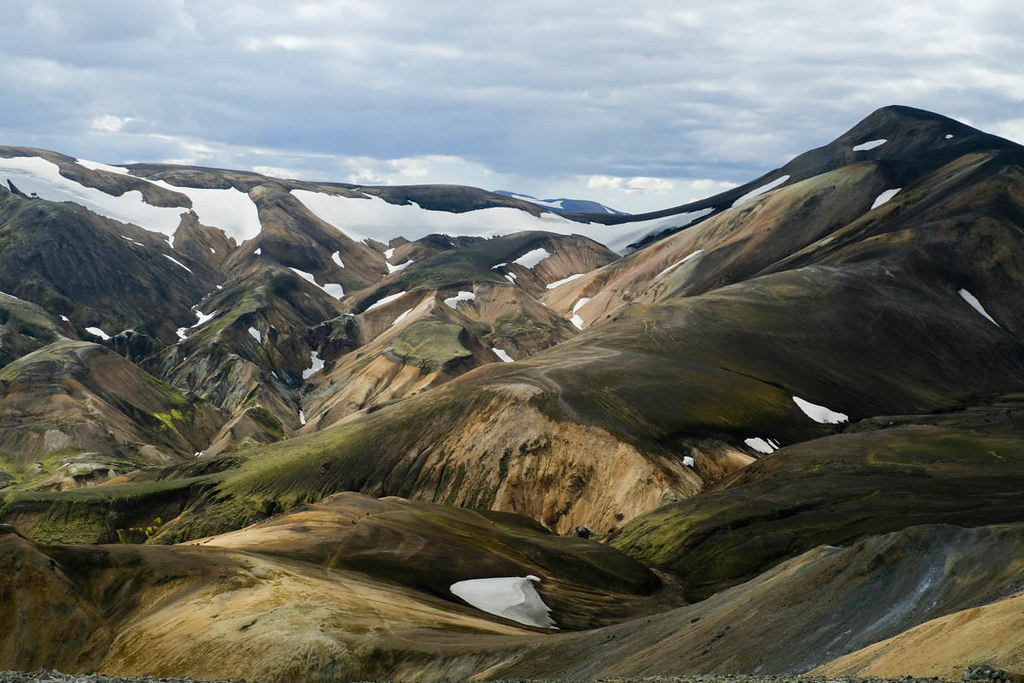 After a traverse over a few small summits (around 900m) the path then descends the other end of the ridge, where it meets another trail which could be used to approach the Laugavegur if you had more days. 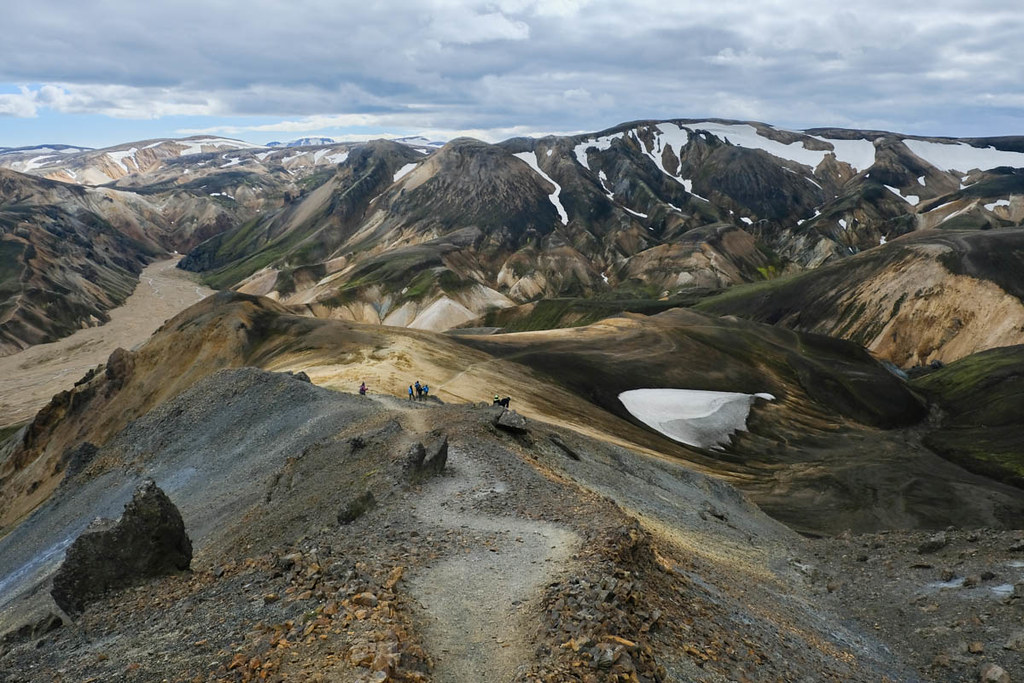 The final descent to the glacial river flats were over slippy ball-bearing gravel, but the colours of the Rhyolite mountains were amazing, with every shade including cyan - so no that's not a camera fault 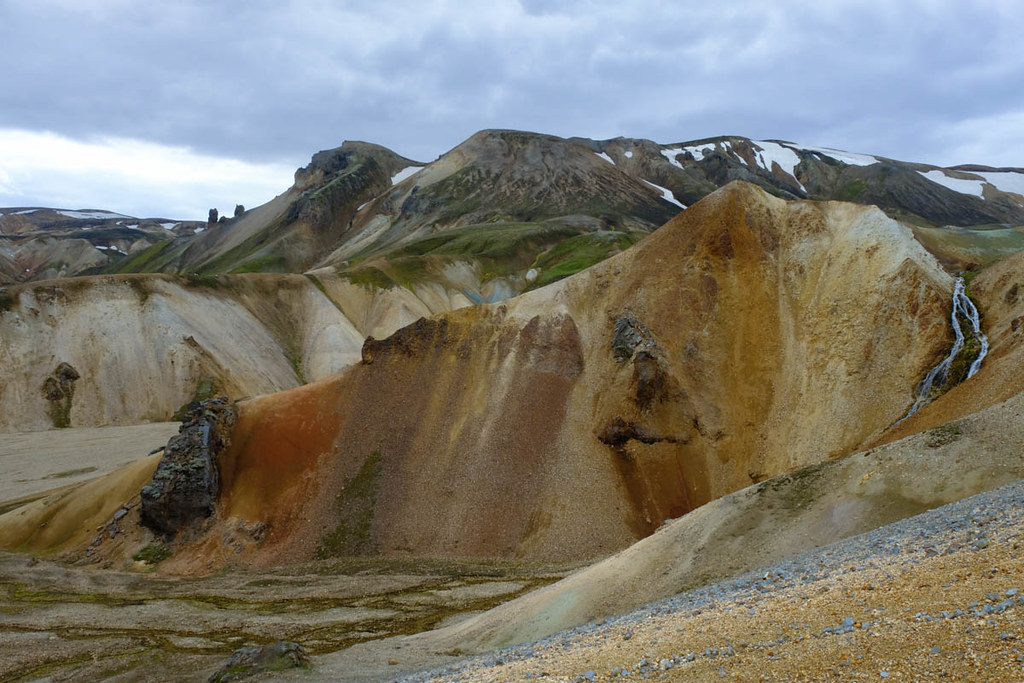 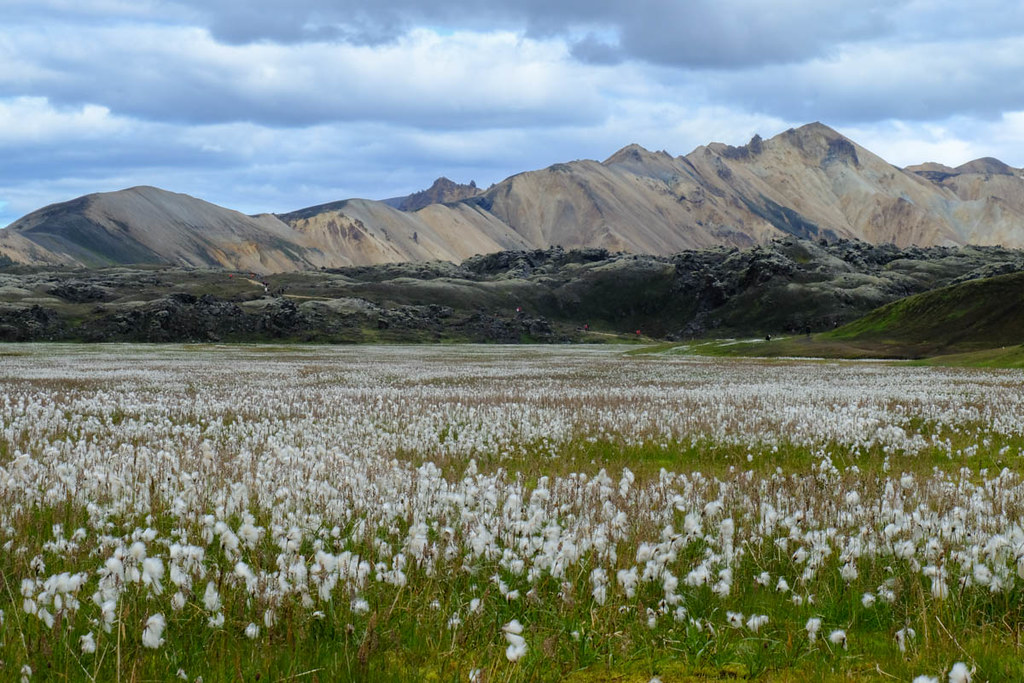 Once down to the flats the path vanishes for the crossing of the valley floor. The guidebook said there was a river crossing but it was easy enough to jump and use stones as it wasn't in spate. 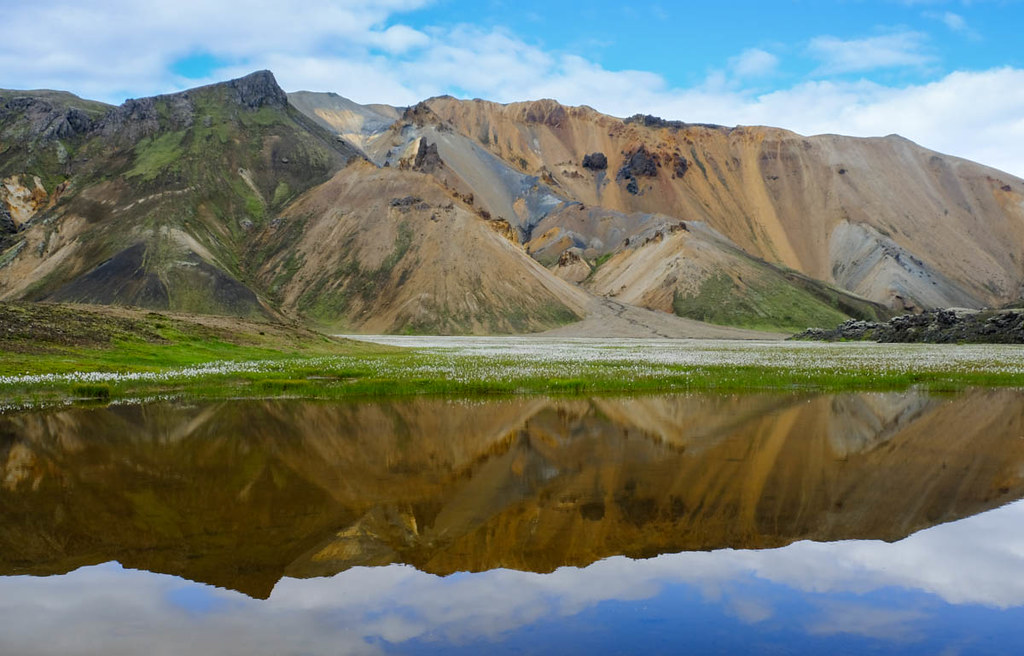 Back at the campsite, we visited the hot springs. In most places the water is either too hot or cold, but here a boiling hot burn flows into a larger cold one, so you get areas with the perfect heat - and can take it as hot as you like. One kid swam into a really hot bit and came back pretty sharpish! Great way to end a wee hillwalk. 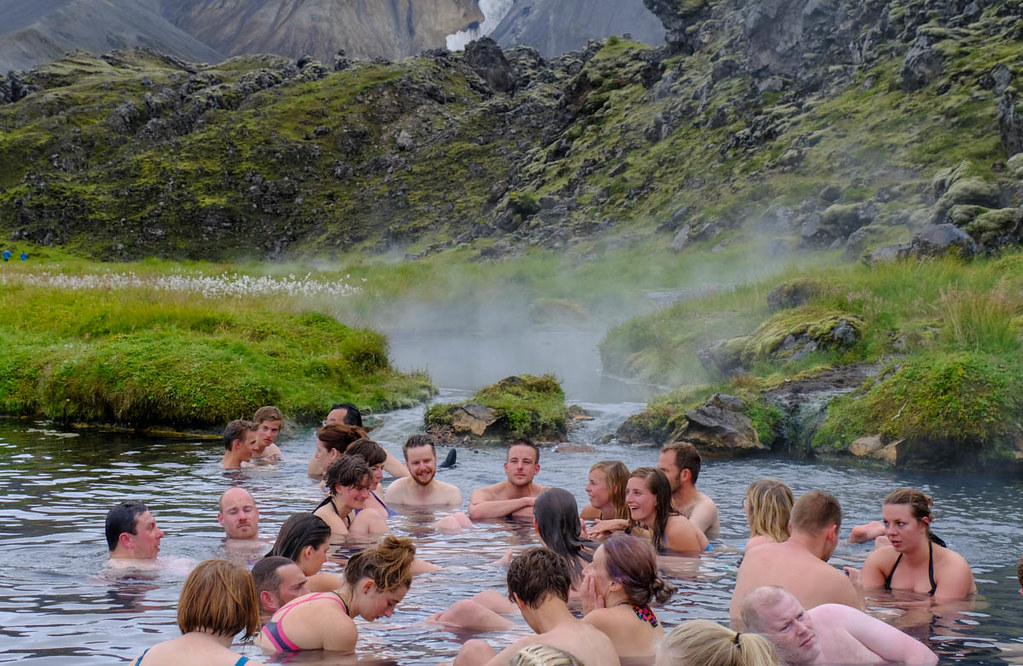 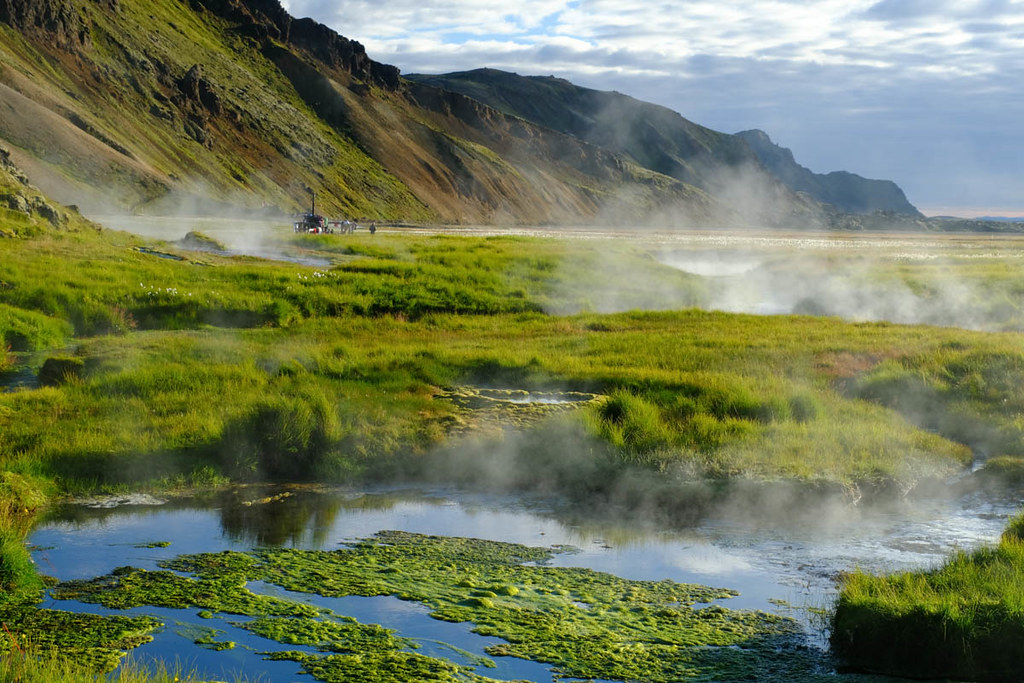 The next day we began the Laugavegur trek...

Iceland is the most amazing, unique, landscape. You've really captured it with your images.

I really must return one day.

Thanks Mal. We were very luck with the fine weather on this day and the next one.

The colours of this landscape just beggar belief. My son's been badgering for a while to do this route, so I've seen a good few pics already; but I still find it hard to believe it's not photoshopped!

Just about to read the next installment...

You are right Paul: a place like no other (although I've never been there, so I only know from photos like these). What planet did you land on?
Looks fairly crowded though, or am I wrong?
On to your other reports...

Thanks both. Landmannalaugar was overcrowded, but we managed to avoid most people on the Laugavegur with early starts and breaking up the stages differently.

Amazing scenery and some amount of bog cotton there. Love the photo of the horses too.

I remember looking in this direction from west of Vik and initially not realising that some of the white in the sky I could see was in fact part of the ice cap and not cloud. And then I found out why I had sandstorm insurance.