2018-04-05 Lingmell.gpx Open full screen  NB: Walkhighlands is not responsible for the accuracy of gpx files in users posts

After failing to reach any summits for the past three days (unless you count Cold Fell - one of Wainwright's outlying fells) we finally had a day of fine weather forecast, so we set the alarms for an early start planning an ascent of Great End via the Valley Route then Wainwright's "easy" route via the amphitheatre above the Corridor Route, hopefully returning via Esk Hause. 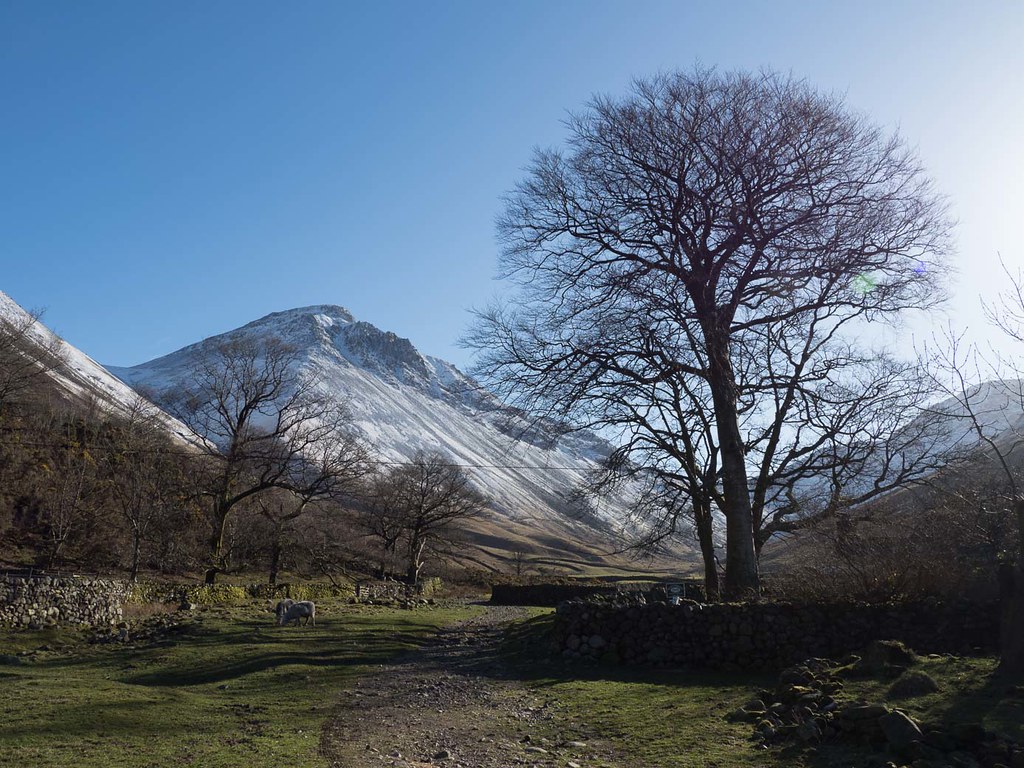 Setting off towards Great Gable

We managed to leave the house just after 9am, with the day just as bright as had been promised. The night before had been pretty wild with some snowfall, but not enough to cause any issues (at least at first!), just enough to make all the fells even prettier than usual... 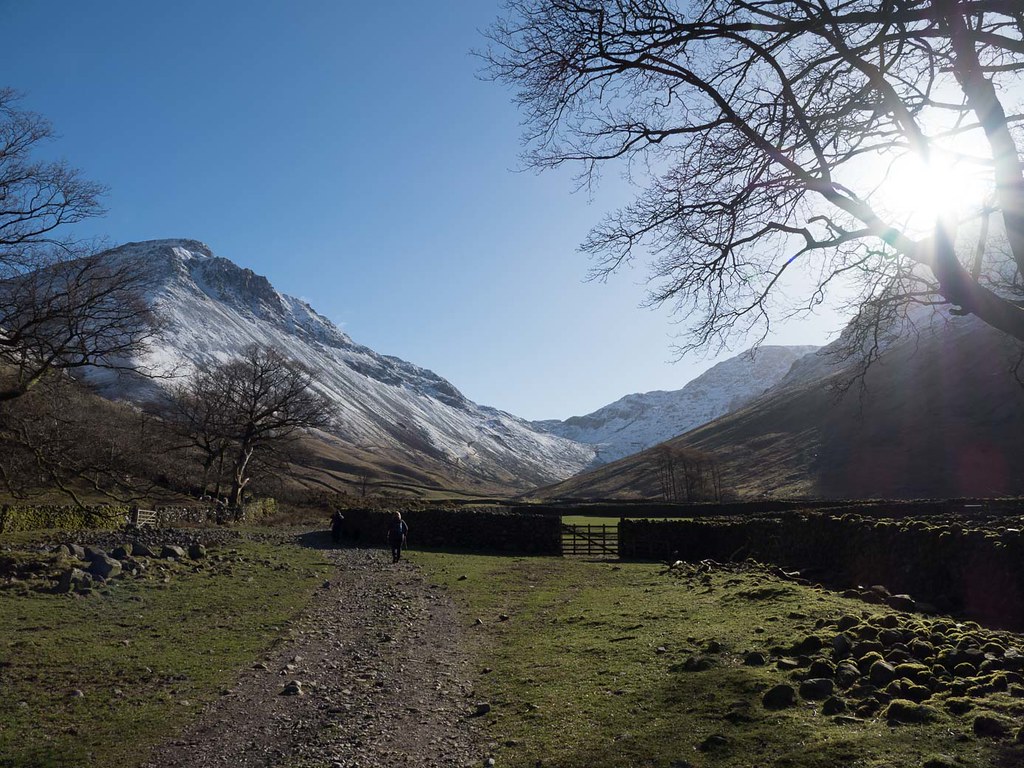 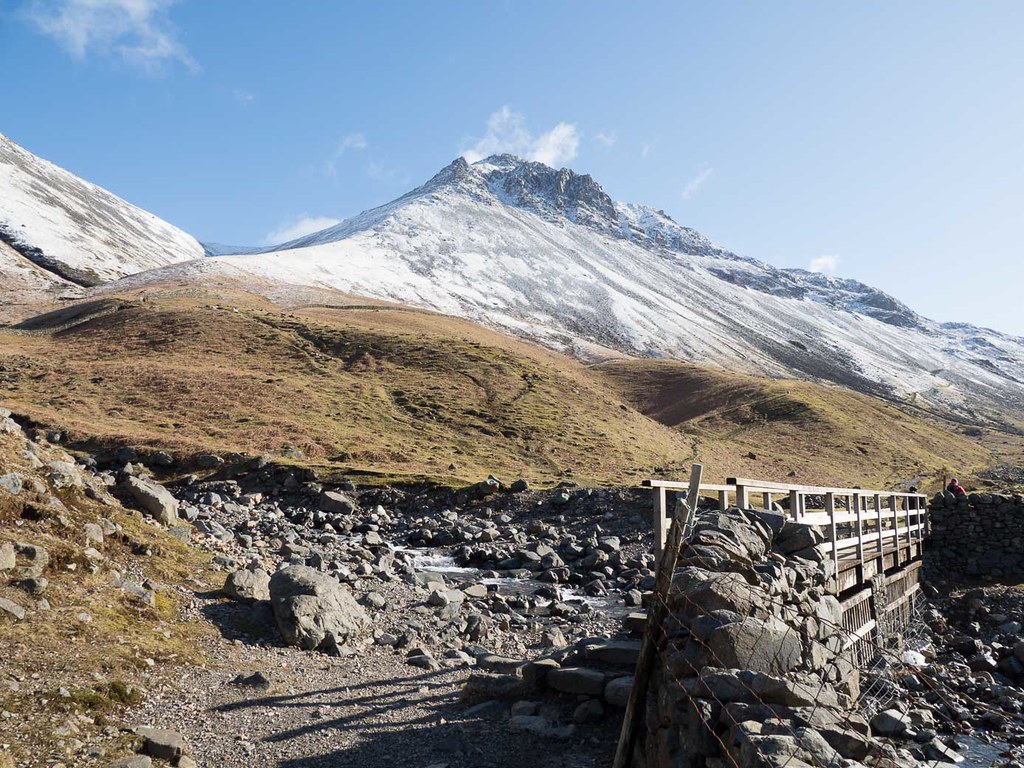 Great Gable with dusting of snow 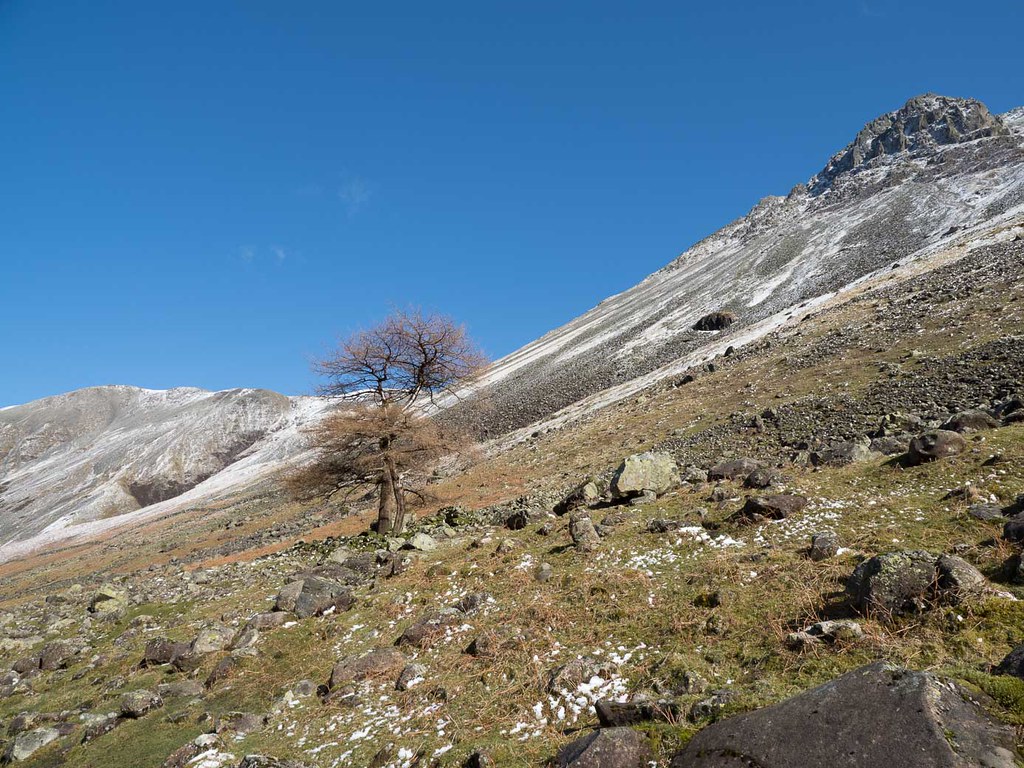 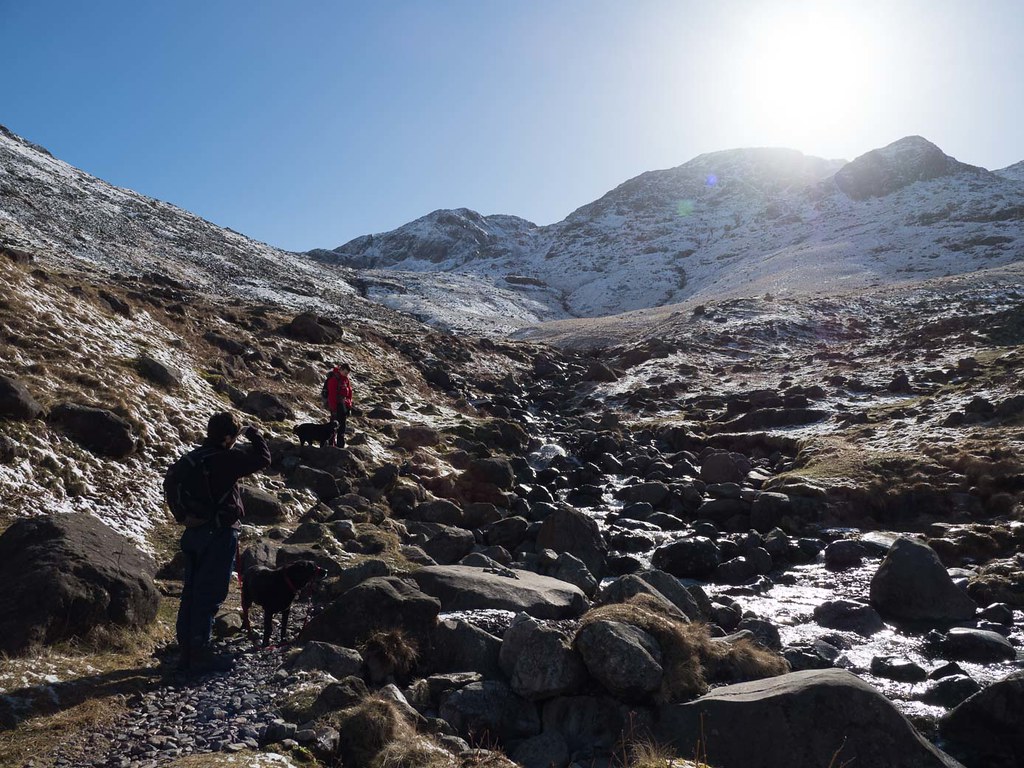 The valley route is a lovely way up to Sty Head. 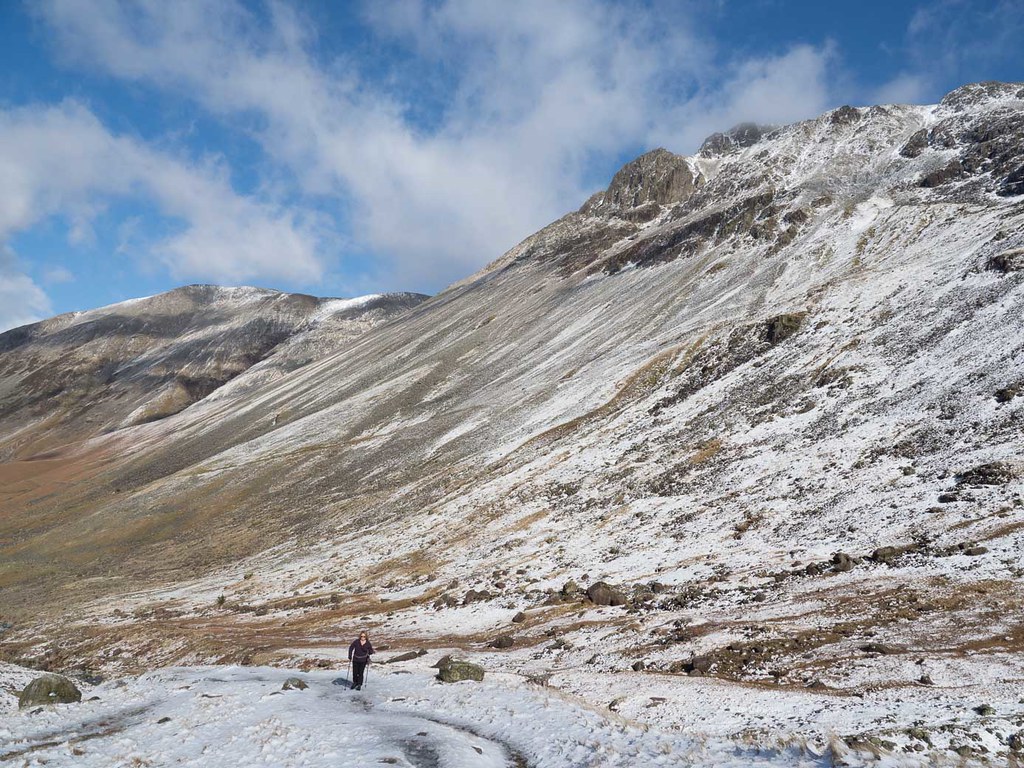 Head up the valley 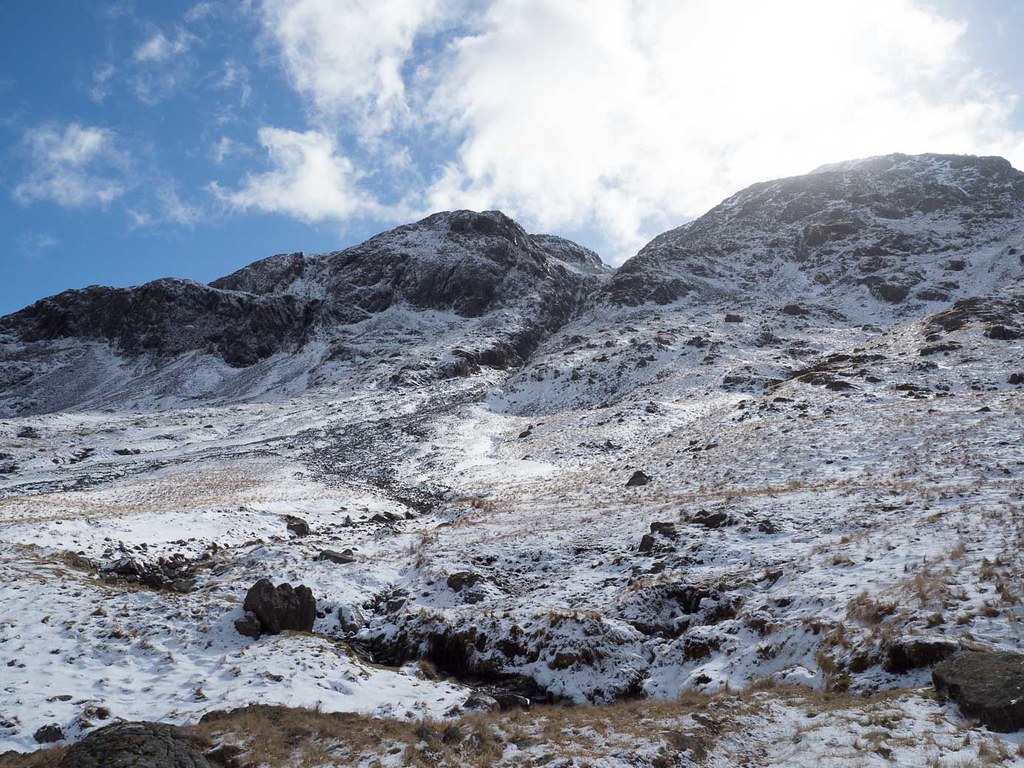 Before long we were ready to cut across to join the Corridor Route just before it crosses Skew Gill. 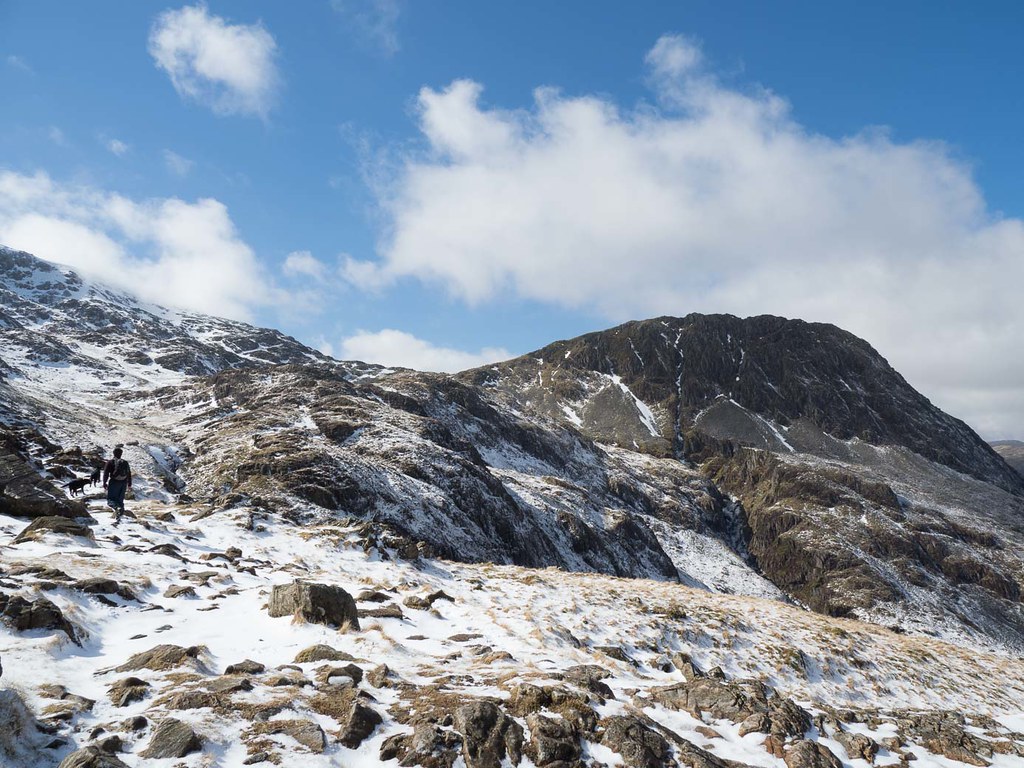 Upon reaching the Corridor Route we started to realize that there had been enough snow overnight - and enough ice from previous snowfalls, to make the going a little tricky. For now, it was tricky rather than dangerous - icy rocks meant care was needed so progress was a little slow. 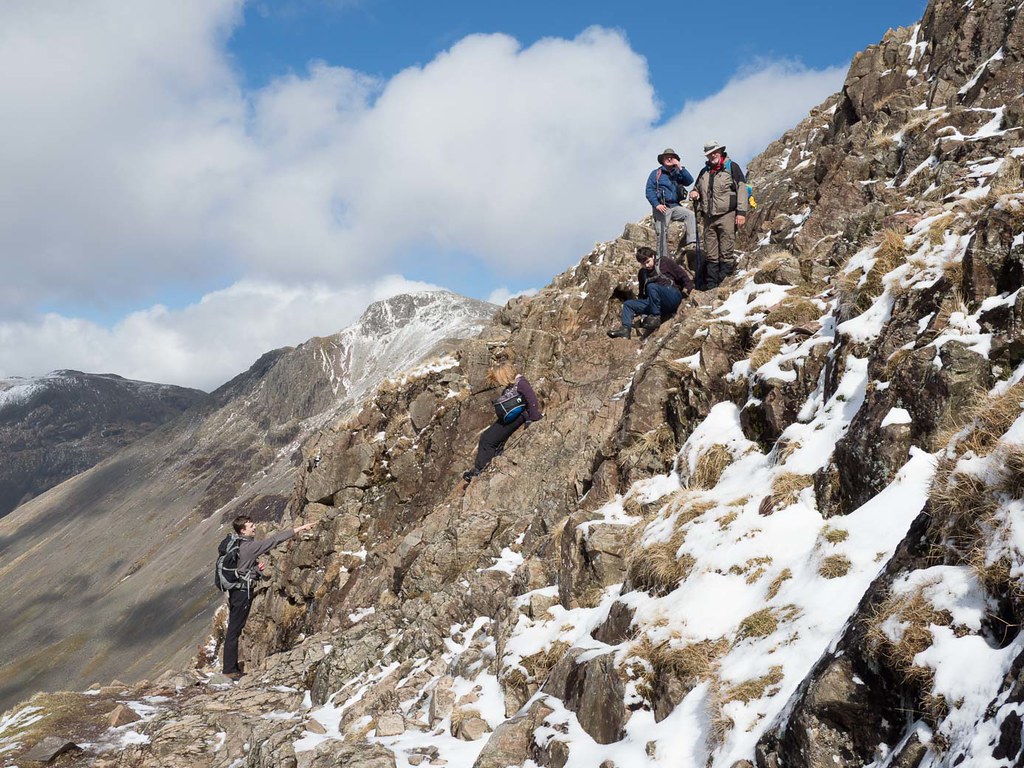 The route calls for following the Corridor Route path until just after it crosses Greta Gill - meaning that the tricky descent into Greta Gill had to be negotiated. Normally this would be fairly straightforward, but icy rocks added another level of trickiness to it. Getting the dogs down in particular was not easy, and we made a note that getting them up again would be still harder. 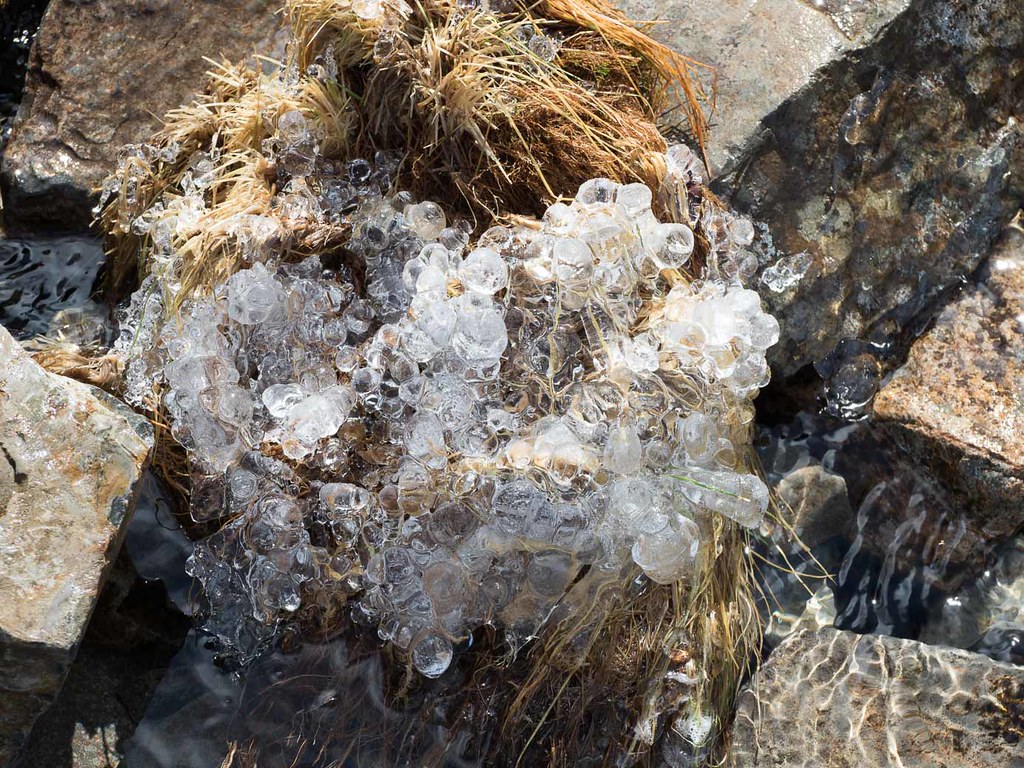 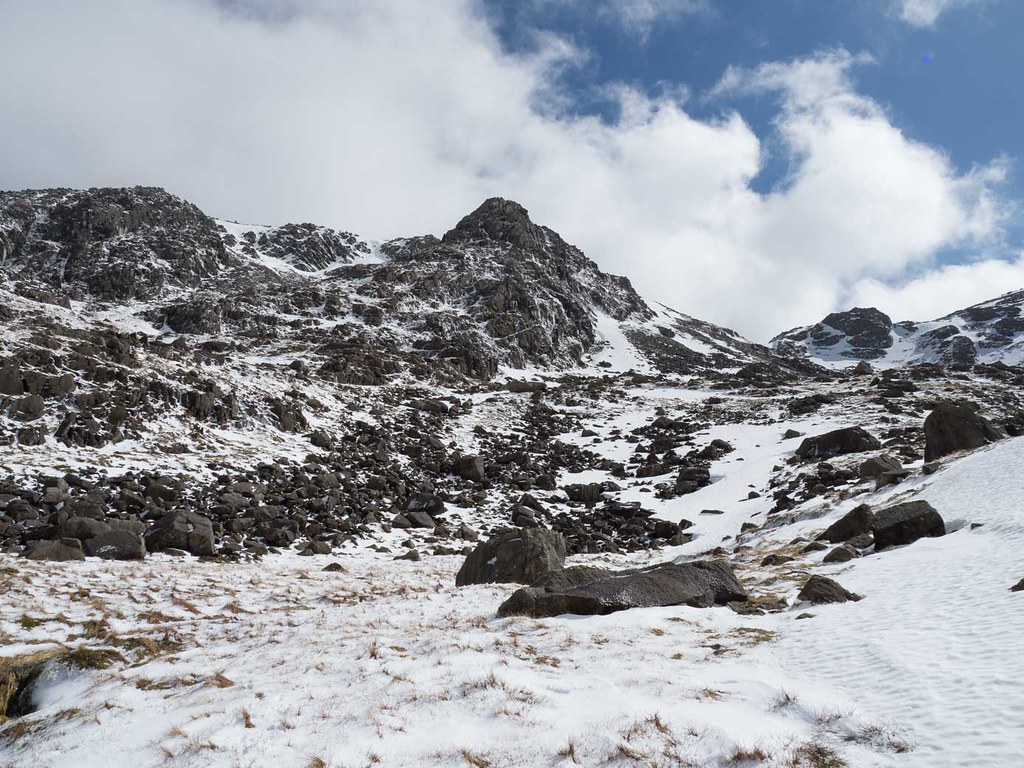 After Grta Gill we turned left up the hillside - this was where the snow first started to make things tricky, as it was impossible to tell where the path described by Wainwright as "simple" actually went. But progress up to the plateau below Great End was mostly straightforward - just one place where we had to cross a snowdrift with an icy crust which gave a little concern. We stopped for lunch when we got to level ground - a beautiful spot. 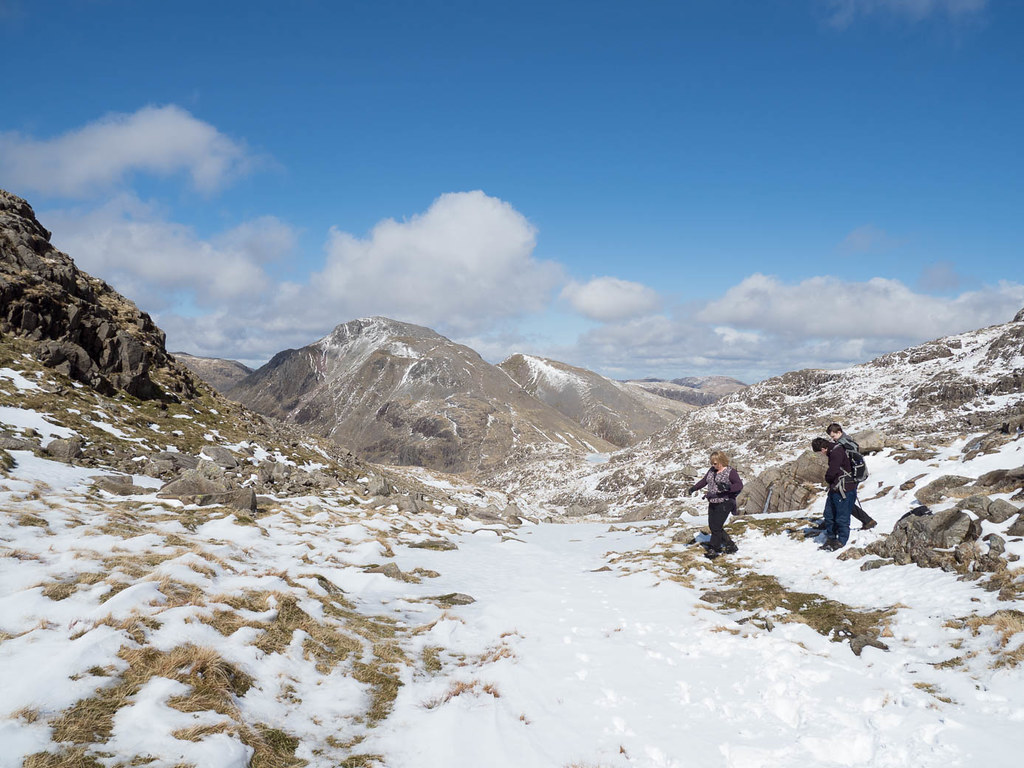 Just after lunch, Thomas had a minor fall after stepping into unexpectedly deep snow, banging his knee. Fortunately no major damage. 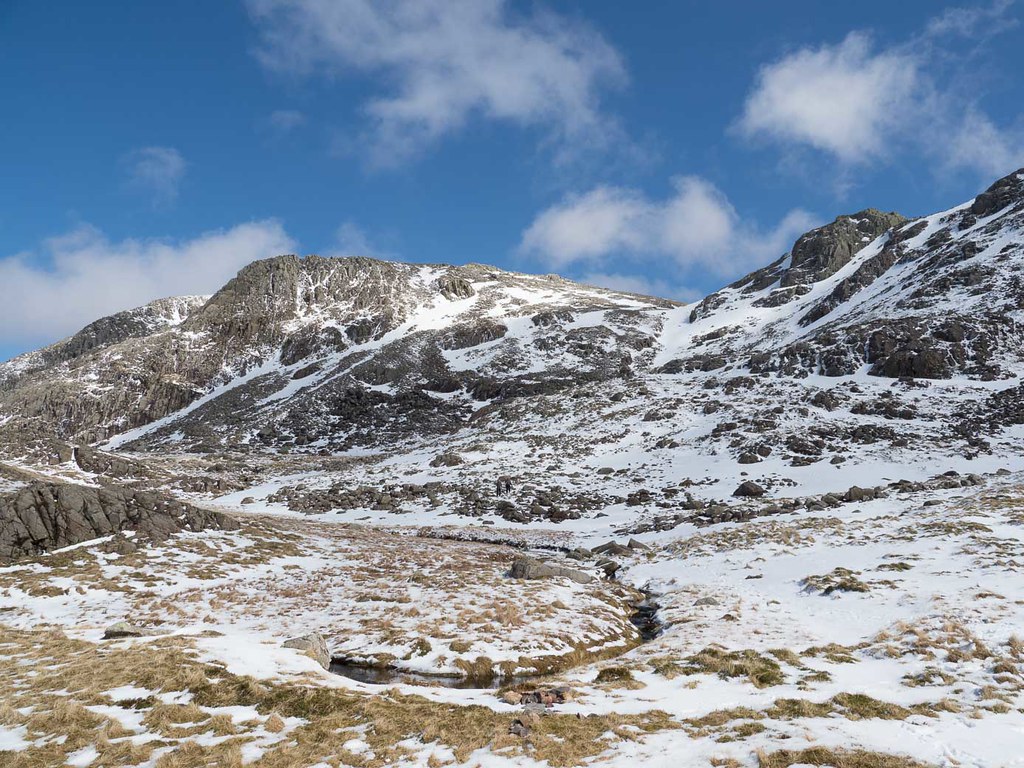 Great End, but no way up

The route claims there are a series of easy gradients from this amphitheatre up to the ridge near Calf Cove, but with everything covered in snow it was hard to see where this route might be, and it soon became clear as we tried to find a route up that the icy crust on the snow meant that continuing the ascent without crampons or ice-axes was not safe.

We needed a plan B, and on looking round it was clear that there was a second exit from the amphitheatre towards Lingmell, promising an easy escape down to Wasdale Head via the Scafell Pike path. As Lingmell is one of our favourite fells (becuase of the views) this seemed like a great fallback. We headed towards Lingmell and rejoined the Corridor Route just before the top of Piers Gill. 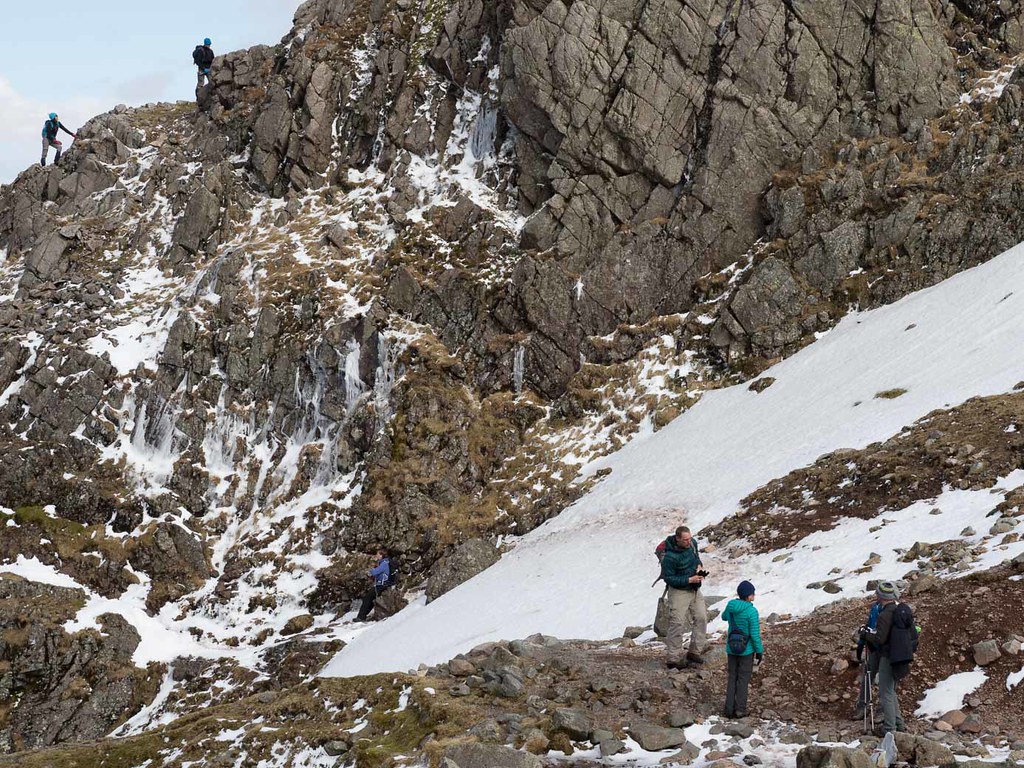 Plan B was going swimmingly right up to the moment where we turned the corner and saw the top of Piers Gill, completely covered by a sheet of ice meaning one slip would take yo right into the gully below. There were footholes making a path across - but it meant 3 metres of terror, especially for me and Robert who are not good with heights at the best of times. Crampons and ice-axe (and knowing how to use them) would have made this a lot safer. We took one look and said "No way", and retreated to consider our options.

Unfortunately there were no appealing options. Returning down the Corridor Route to Sty Head would mean getting the dogs up the scramble above Greta Gill that we had already noted would be difficult. There is a path down beside Piers Gill - we've ascended that way in the past - but it's not suitable for descent in icy condition with dogs. We looked to see if there was a way over or round the crags beside Piers Gill, but there did not seem to be. And we had already determined that we could not get up to the Great End ridge safely. So we went back to have another look. 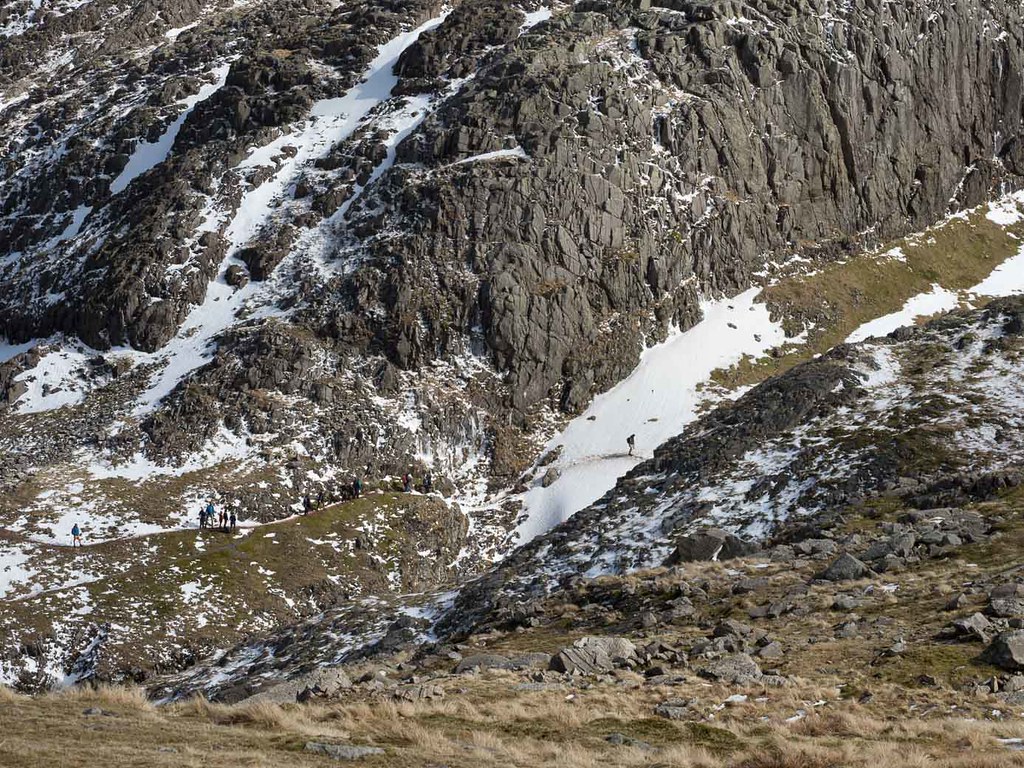 Lorraine went first - the kids at this point still thought she was crazy - and found that the path that had been cut in the ice was level enough that it was possible to feel slightly more secure if feet were placed carefully and hands used to lean in to the slope. I crossed next, knowing that delay would only make it worse, and carefully avoiding looking at - or even thinking about - what lay below. I could not stay to watch Thomas and Robert crossing - my nerves would not stand it - but Thomas found it straightforward enough and Lorraine eventually managed to talk Robert across safely. Reactions of other walkers to the hazard were mixed - some turned around, some walked across without a care in the world, some sought a route over the crags to avoid it. One party of teenagers crossed with so little care that two slipped - and fortunately recovered their balance and grip before falling. I don't think they realized how close they came to serious injury or worse. 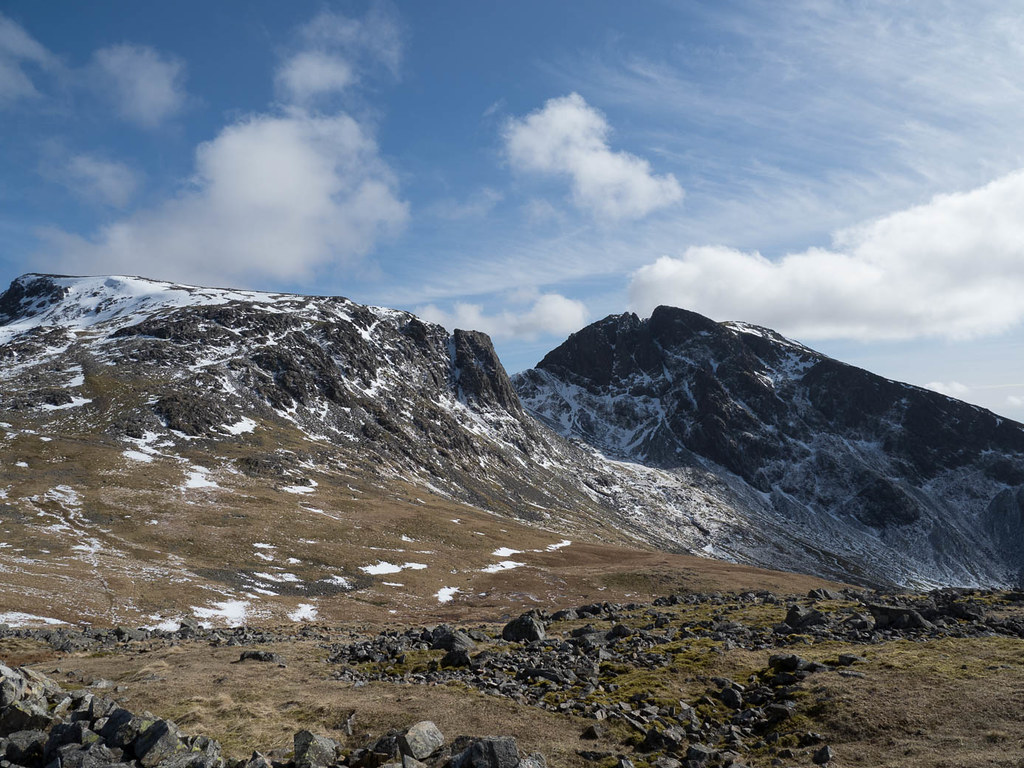 After a pause to recover our shaking legs, we were now able to ascend to Lingmell Col and thence Lingmell without further difficulty. The views from the top were every bit as spectacular as we remembered from our previous visit. 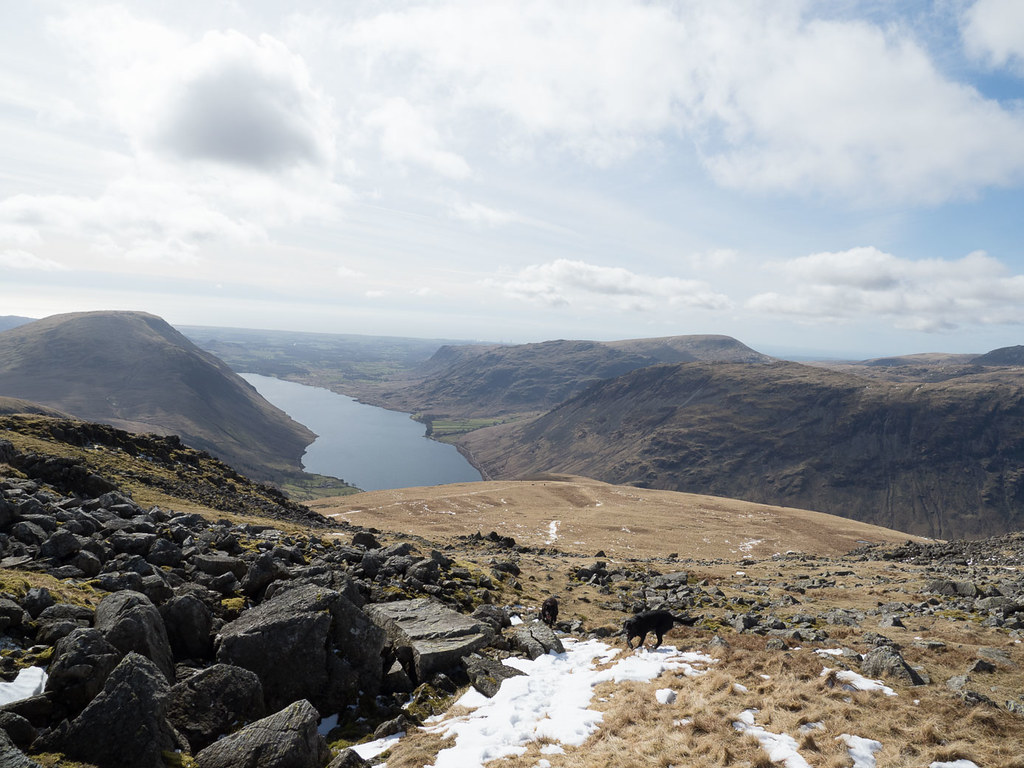 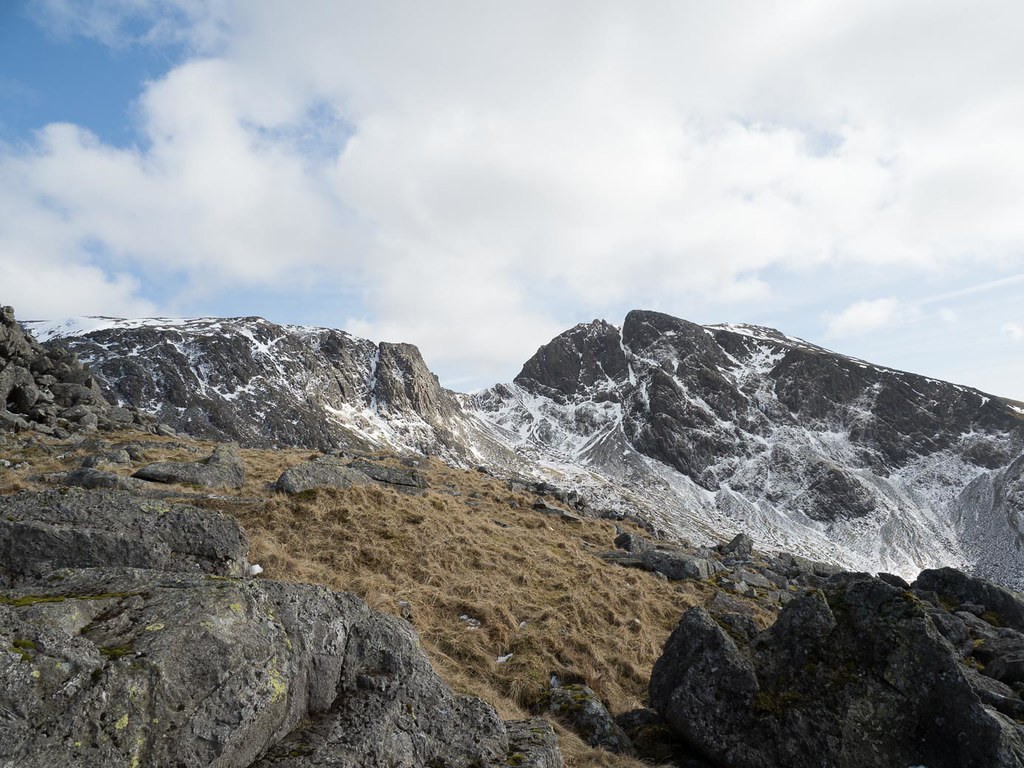 Originally I had thought we would descend via the Brown Tongue route along with all the Scafell Pike traffic,, but checking Wainwright suggested that there was a more direct and much more pleasant descent available down Lingmell's south ridge. Easy walking, no crowds, and fine views to either side. 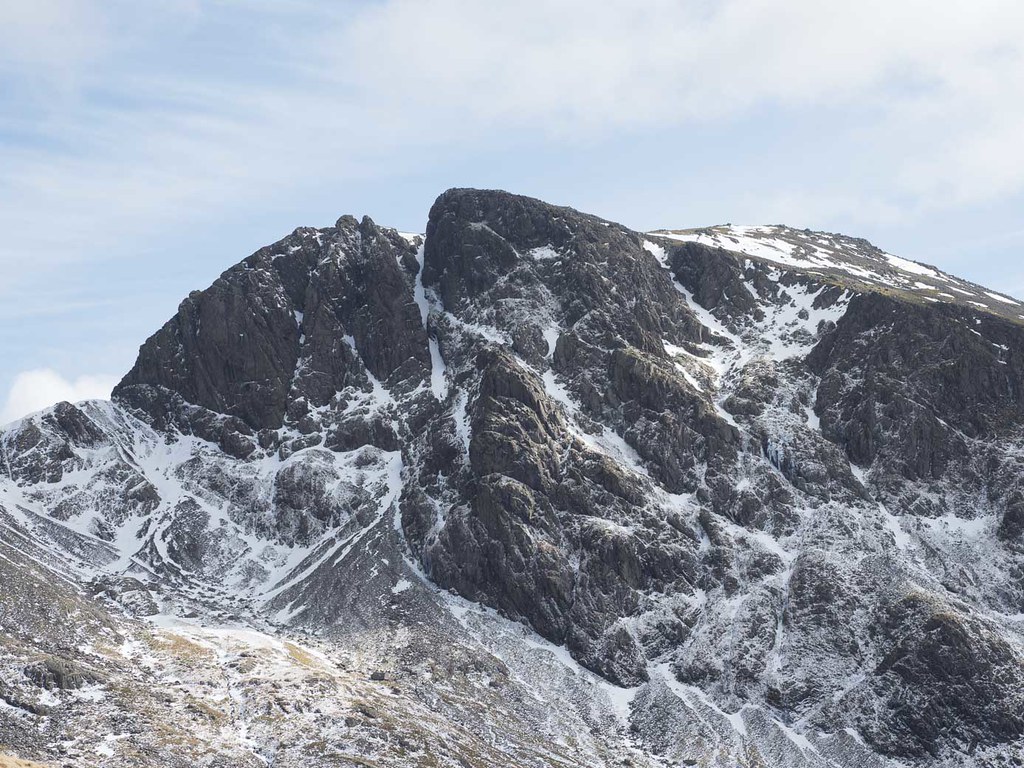 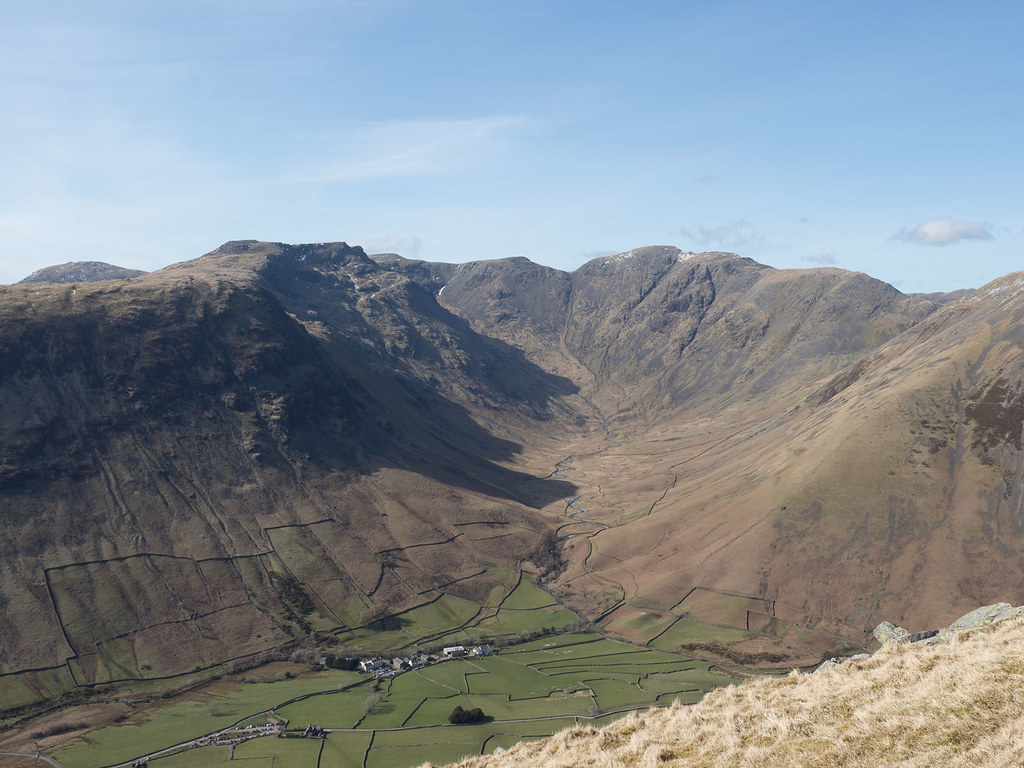 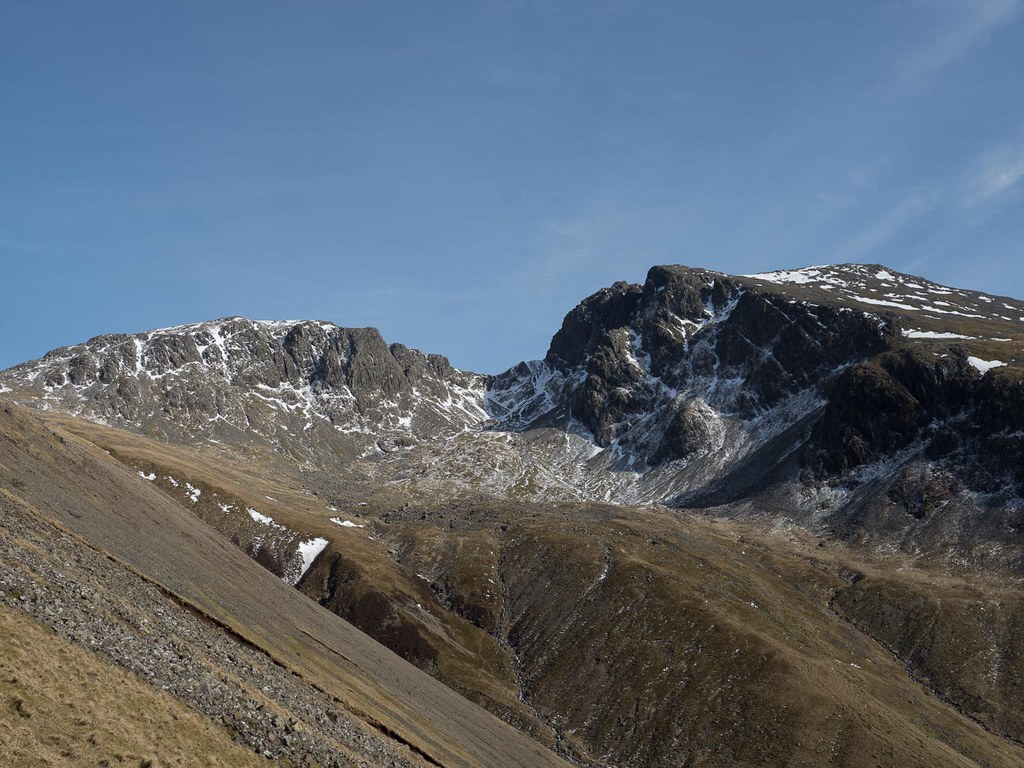 Seems like the RAF had decided it was a fine day to be out too - we had seen several pairs of low flying jets through the valleys earlier in the day, but they are generally gone almost before you see them and tricky to get a photo of. But this guy was moving rather more slowly. 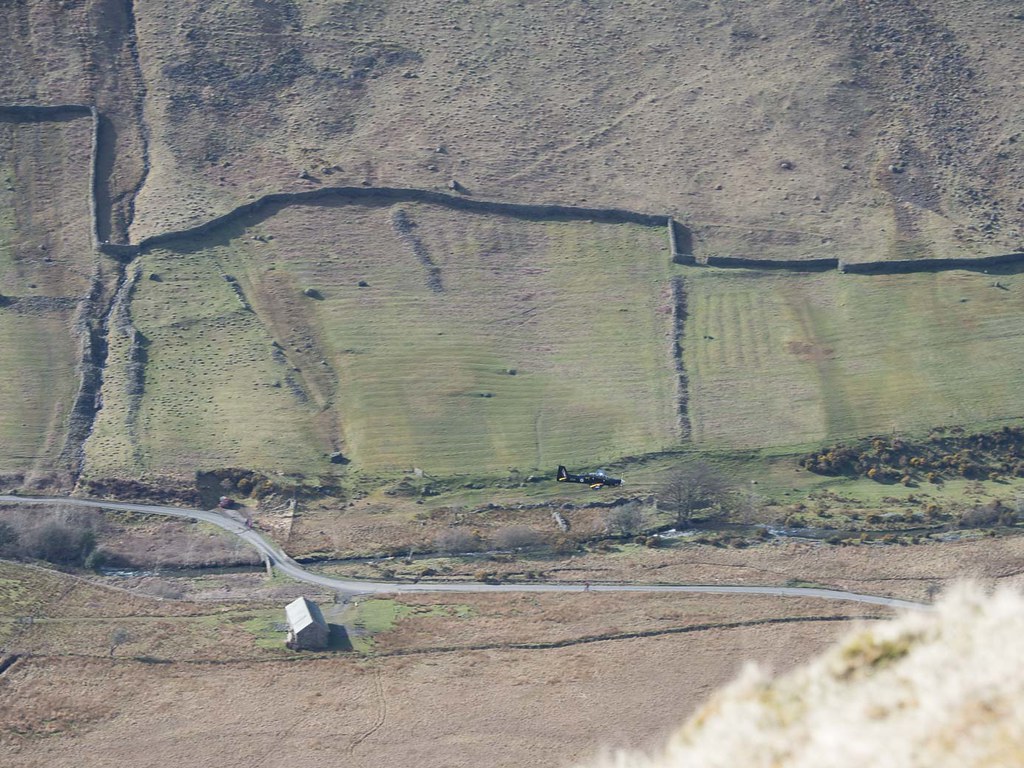 And these guys even more slowly. 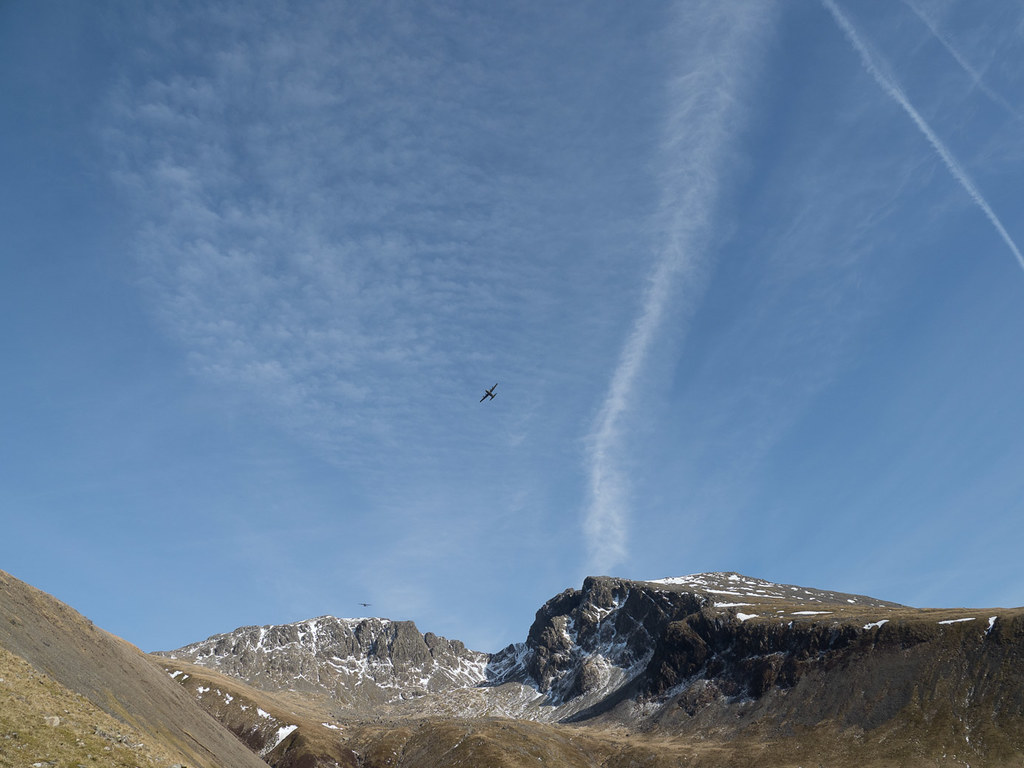 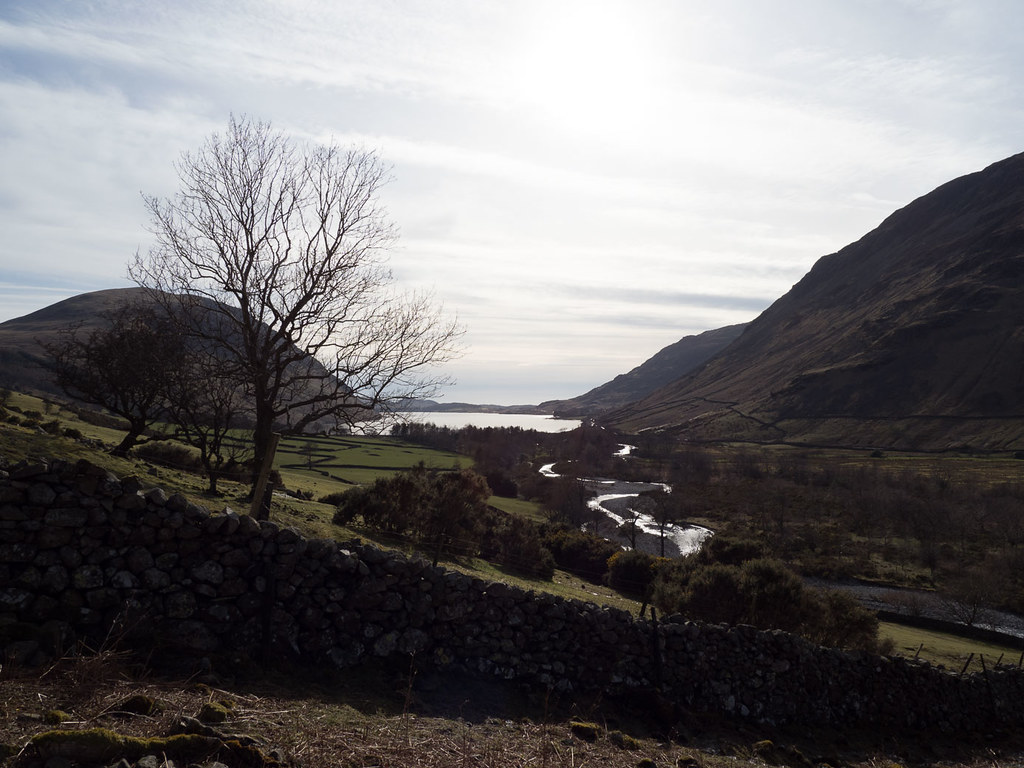 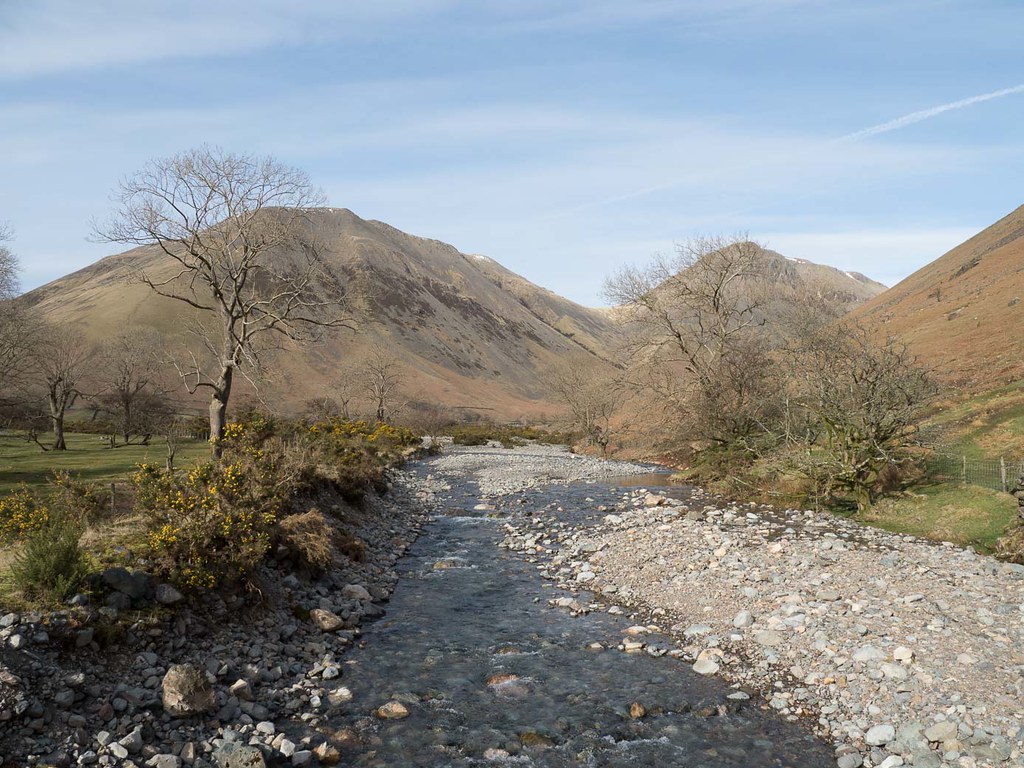 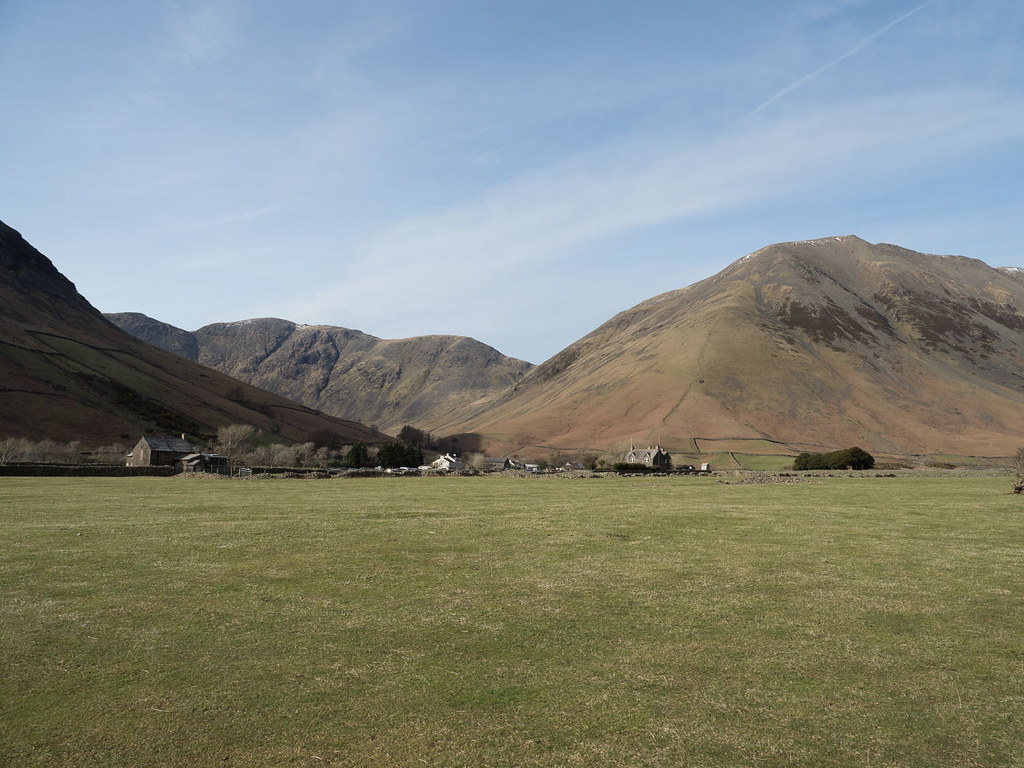 The pub is in sight

We all felt we had earned a drink - so the walk ended at the Wasdale Head Inn. We were planning to eat there that night anyway, so we decided to stay for an early meal too. We noticed we had all caught the sun a bit! 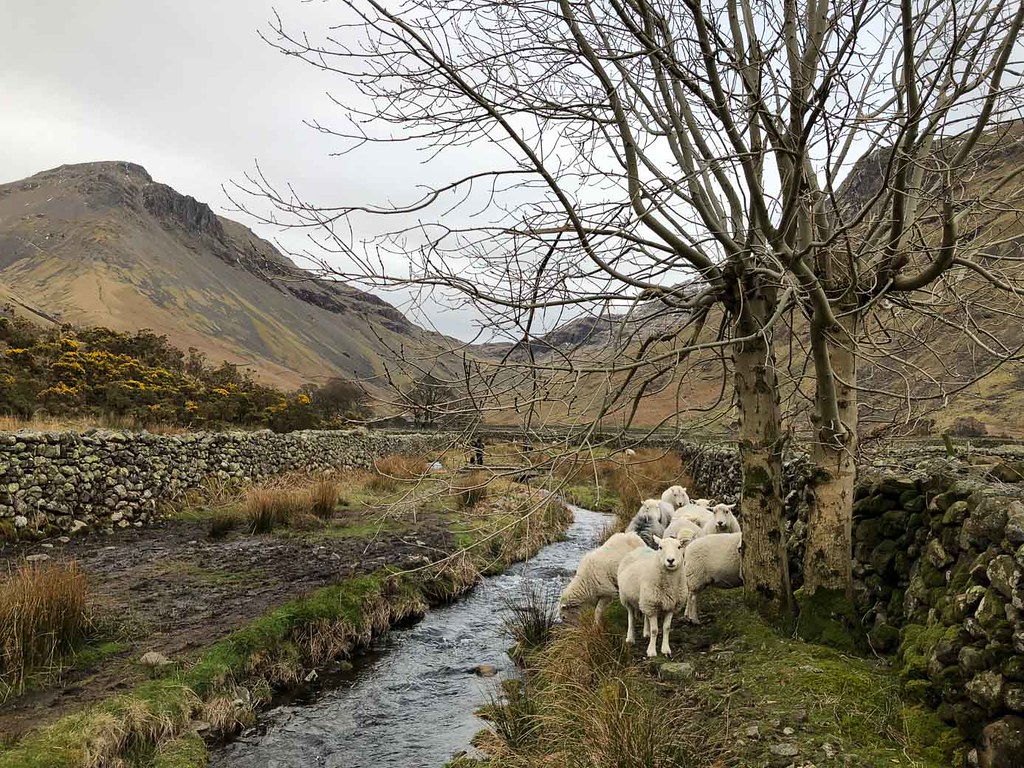 Then back down our favourite path beside the stream to home. Full of sheep tonight for some reason - I suspect someone must have left a gate open...

A very interesting report, well described and with excellent photos. You all seemed to have a great day in the end. Have to say though, the Scafell massif is quite a serious place when there's snow and ice about and it makes me cringe when I see people up there in such conditions without ice axes or crampons or even Microspikes. At least you had the good sense to turn back from that snow bank at the head of Piers Gill, which was potentially lethal. Hopefully your report may serve to highlight how hazardous ice and hard snow can be, even when there's not that much of it, and the importance of being suitably equipped.

Enjoyed your report - I'm from West Cumbria, so the Wasdale, Ennerdale and Buttermere valleys were my 'local' walking areas, and I still head back there once a year. Makes me a bit homesick when I see beautiful photos like that! (There again, I'm in the Highlands now, so can't complain too much

I would agree with Dav2930 turning back when you did seems like a sound decision. Probably a bit of an issue with exposure is a good thing in these situations! Once you slip on sloping ice, you accelerate at a rate that's hard to credit - within a second or so you can be moving so fast that to effect an axe arrest becomes a real problem. And if there's a hard stop (eg a rock), a lot of damage can be done.

Looks like wonderful conditions to be out in, great views and nice photos.

Has this outing prompted you to sort crampons and axes for next time? You all coped admirably this time but it reads like one of those "lucky" ones that could easily have been unlucky and fairly serious.