What a privilege to be turning into Cwm Cywarch on a glorious spring day such as this. There is something absolutely magical in being in a dead-end valley, enclosed by steeply sloping hills. You just know it will be worthwhile getting to the top of them. The excitement builds as you set out to discover what's in store.


cwm cywarch.gpx Open full screen  NB: Walkhighlands is not responsible for the accuracy of gpx files in users posts
At the carpark a couple of chaps had kitted up and were just about to set out for a long round, we had a chat and they set off. Another car arrived with 3 more folk just before I got going and we said our hellos - busy here!

Across the bridge by the ford just down the road from the carpark, up the stony sunken lane where at the top I got in the way of sheep being shepherded down by dogs - they turned around and went back up before meeting the dogs again. Chaos! I just stood still until they sorted themselves out. Out of the lane and onto a track, which becomes a path and takes a rising contour up the northwest flank of Pen yr Allu Uchaf. into the dead-end of Hengwm

To get to the summit I turned southeast by the fence alongside the third gully near the head of the lower cwm. I could see the 2 chaps ahead. This was a steep ascent and a system shock after the gentle path so far! A USAF F-15 flying low just above the ridge gave a welcome distraction, in fact there was a lot of air activity throughout much of the day. A short walk to the highest point and I had another chat with the guys. They set off and I stopped at the ladder stile for second breakfast, oh yum did I enjoy that! Across the stile and there is the faint track of a 4x4 to follow in a small descent to the bwlch, which skirts around peat hags and the going was dry in this weather. Ascent again now up toward Drysgol. I stayed below this peak, following a wonderful path which skirts the edge of the cwm for 1km to a narrow part of the ridge and the memorial cairn to a MRT member who died near here. There was a chap at the cairn, he was with the group that arrived just before I set out from the carpark. He said he was waiting for his friends, who he thought were ahead of him though. I had heard voices but we couldn't see anyone in that direction on the route to Aran Fwddwy. All a bit strange. the Arans cliffs and Creiglyn Dyfi the memorial cairn between Drysgol and Aran Fawddwy, Gwaun y Llwyni on the left, Glasgwm behind and Cadair Idris in the distance The Arans weren't on my route for today, I stayed with the path/sheep trod on the edge of the steep slopes of the western cwm, heading round to the south. This gradually descends then there is a small ascent to the summit of the Hewitt Gwaun y Llwyni. From a distance it appears as if this has a tent ridge-like top but in reality it undulates and is a widish ridge. I could see the chap at the memorial cairn, still waiting. It was good fun to follow the ridge top to its southern end. I crossed the fence and headed down alongside it where I could see a stream to be crossed. It looked as if the terrain at the other side of the stream wasn't going to be so easy, the usual combination of bush, bog and grass clumps. But I spied a sheep trod so headed for that which also led to the best crossing for the stream. Thanks again, sheep! The trod led nicely in the direction I wanted and around some rock outcrops, but became less distinct and more difficult as I headed west toward the fenceline. It still wasn't bad, although there were boggier sections to avoid alongside the fence to the bwlch below Glasgwm. across the stream onto the sheep trod along the fence to the bwlch below Glasgwm

I stopped just short of the bwlch for lunch, next to a wall that was in the sun but gave shelter from the cool breeze. The wall turned out to be part of a circular enclosure that had a small shelter within it on one side - almost a one person bothy. The wall was complete, with no entrance, the way inside only being over a partially-collapsed section that was probably a result of folk climbing over it. I wonder what it was built for, was it a memorial of some sort? Anyway, a long stop for lunch was great in this fine spot. During the walk I'd been gazing over at Glasgwm and recalling great memories of a trip nearly 10 years ago with part of the family on an amazing day of freezing inversion conditions. My outing today hadn't been planned to include Glasgwm but I couldn't resist a revisit. looking down on the stone enclosure the shelter inside the enclosure

I eventually packed up and headed along the fence, taking a couple of detours to avoid very boggy parts. From the bwlch it is a simple matter of following the fence to the summit. Strangely, I felt tired after my long fuel stop so the going was slow up this steep 200m ascent. But after a scree section the angle relents, there is a stile to cross and the summit cairn appears. boggy bit to cross, 10 years ago we skimmed stones on that frozen pool 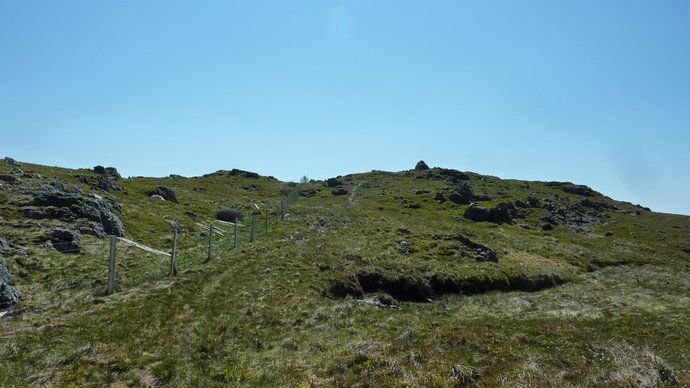 nearing the top of Glasgwm

It was superb that I could remember the detail of our trip back then and relate it to today. I reached the summit and took photos at similar places to last time, for comparison and nostalgia. It was so good. Glasgwm is an unassuming hill but has that something about it that defies analysis. I lingered a while soaking it in. Wonderful. 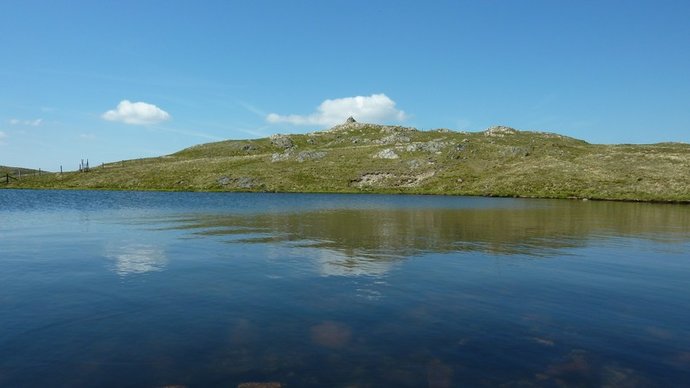 the cairn across the lake Cadair Idris in the distance, in front just remnants of what was a vast forest when we were here last

There's a few photo comparisons of the 2 outings here:
https://www.walkhighlands.co.uk/Forum/viewtopic.php?f=16&t=80800

Having visited the Hewitt Pen y Brynnfforchog before, this time I wanted to sample the direct way down from Glasgwm. So it was down from the cairn toward Llyn y Fign, across the stile and to the left of the lake heading south. I had expected this route to be off-piste but of course there was a path, this met a fence at Bwlch y Gesail and continued alongside it above the cliffs of Craig Cywarch. A turn to the east leads to a steeper descent and wonderful views along the high cwms, climbing cliffs and most of the route taken earlier. What a sight on this day! 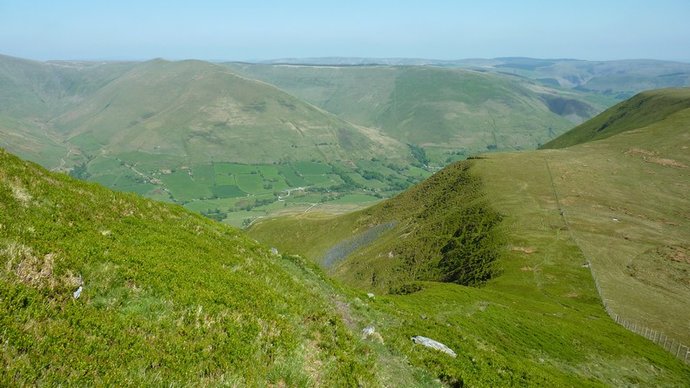 descent alongside Craig Cywarch, to the top of the mining track 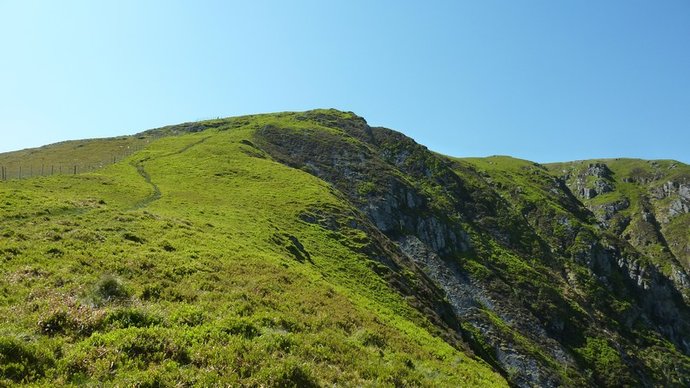 and looking back up The path leads to a notch in the edge of the cliff which is the start of an old mining track which zig zags steeply down 400m to the valley floor. There is mixed woodland lower down, ash were only just coming into leaf and there were masses of bluebells. A fine end to the views of today. 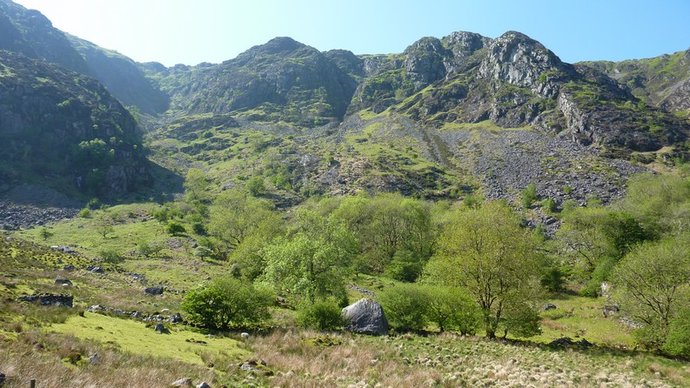 part of the wonderful cwm The chap who had been at the memorial cairn was just ahead of me as I reached the carpark. He had waited and waited for his friends but not seen them again so had headed down the same way he'd ascended. Abandoned! I told him to tell them from me that they are cads and bounders and owe him many many drinks and meals in compensation. But perhaps they never turned up, still on the Arans somewhere avoiding their mate, who could still be in that carpark..........

A fine report and pics of what looked a tremendous day.