This isn't a big walk and I don't have a lot of photos but here it is anyway.
Head West from Killarney to Beaufort Bridge and turn South to Kate Kearney's Cottage.
It's actually more of a tourist trap with the shops etc. Kate Kearney's Cottage was actually a pub when I was there.
Park up here and you're at 55m.
Go back down the road and take a track which was quite muddy to your right/East.
You are soon at the bottom of what I would call the North West ridge.
There isn't much of a path so I just made my way by the easiest looking route.
This is followed up to a first high point at 568m. 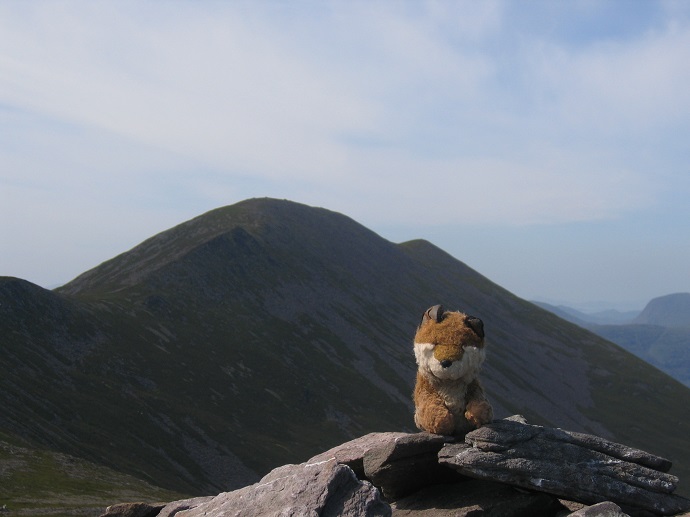 View of Reeks from summit of Purple Mountain 832m

I descended South West passing Glas Lough at 472m to the Head of the Gap (of Dunloe) at 239m. Head of Gap of Dunloe leading to Black Valley Further down I was able to follow a ruined fence down to the Gap.
From there it is roughly a 6km walk back through the Gap of Dunloe to Kate Kearney's Cottage.
If you follow the the road further it splits, the road going right goes to the Black Valley around the back of MacGillycuddy's Reeks but comes to a dead end beneath Brassel Mountain.
However, it is not appreciated taking your car through the Gap of Dunloe as jarveys with their horses and jaunting cars ply this route with tourists from Kate Kearney's Cottage to as far as Lord Brandon's Cottage where they can get a boat back through the lakes to Killarney.