This was the walk that I really wanted to do when I came to Southern Ireland. To complete this great horseshoe of a route. The exciting bits are undoubtedly from Cruach Mhor across The Big Gun to Cnoc na Peiste and the ridge from Corran Tuathail to Binn Chaorach. In case anyones confused I've used the names on the OSi 1:25000 map of Macgillcuddy's Reeks e.g. Corran Tuathail is Carrauntoohil and Binn Chaorach is Beenkeragh.

Finding the start is the first problem. I took the N72 West out of Killarney as far as Beaufort Bridge where I headed South towards Kate Kearneys Cottage and the Gap of Dunloe. This road is followed South for about 3 km and then I turned right. In about 4 km you come to Kissanes Cross. About 150m after this turn left at a sign saying Carrauntoohil 5. This 'narrow' road leads to Cronins Yard. Good Luck!! I would also mention there is a charge for parking here but there is also a small place to purchase snacks, changing rooms and toilets.

From Cronins Farmyard which sits at 150m I headed South West up the track until I met the stream (An Caol Dubh) descending from Loch Coimin Piast which sits in a corrie between Cruach Mhor, The Big Gun and Cnoc na Peiste. I then ascended South East to the summit of Cruach Mhor at 932m. You don't have to be religious to appreciate the effort that has been put in to build the shrine on top of this mountain. If you've come up onto Cruach Mhor then the next bit is what you are here for. I descended South from the summit to about 900m before ascending to the summit of The Big Gun at 939m. The Big Gun from Cruach Mhor

It is then a descent South West to roughly 880m before ascending to the summit of Cnoc na Peiste at 988m.

That was the scary bit over for the moment and I must admit that I was glad it was a good day and the rock was dry or else I probably wouldn't have tried it. 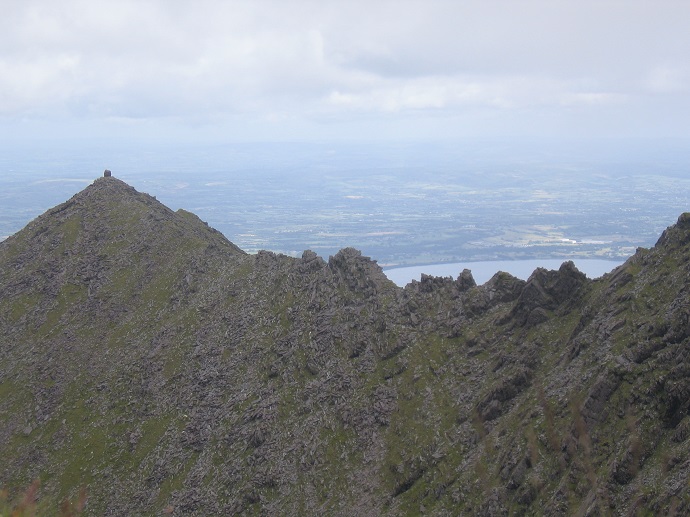 From Cnoc na Peiste it's a gentle descent South West to approximately 930m before rising to the summit of Maolan Bui at 973m. There is a route up Maolin Bui from Hags Glen called The Bone which I've also been up, but then you're missing out the good part. From Maolin Bui the ridge carries on South West in an easy fashion descending to 900m, before passing over an intermediate bump called An Saru at 926m. It descends again to 900m before changing direction and heading a short distance West North West to the summit of Cnoc an Chuillin at 958m.

From Cnoc an Chuillin I descended West North West and then West to a col at 700m before ascending onto the long flat ridge of Cnoc Toinne at 770m. From here you can clearly see The Devils Ladder coming up from Hags Glen. This is like the Tourist Route / Pony Track on Ben Nevis. There is a route that ascends Cnoc Toinne from Hags Glen called The Zigzags (Bothar na Gige); however the disadvantage is that you have to ascend 100m higher before descending to the top of The Devils Ladder and secondly it is very hard to find the start and the finish. I was looking for the top of it making an appearance at 813 834 as I walked along the top of Cnoc Toinne but couldn't see it.

Although I did come across this rather delightful smiley face. Whoever has the time and energy to do this is a better man, or, woman than me; although it does kind of take away the solitude of the place. Top of The Devils Ladder from Cnoc Toinne

From the end of Cnoc Toinne I descended North West to the head of the Devils Ladder at 734m. Up until this point in the walk I had not seen or met another person. Looking down The Devils Ladder

It is then a stony track ascending North West and finally North to the summit of Corran Tuathail at 1039m. There is a large cross at the summit with a plaque attached. Plaque on cross at summit of Corran Tuathail Looking back to start of walk from Corran Tuathail Binn Chaorach is just over a kilometre away almost directly North at the end of a gently curving ridge but first I had to descend West North West to pick up the path. The ridge descends North West to where O'Sheas Gully comes up to meet the ridge from Coimin Uachtarach on your right. The ridge then ascends to 959m On the Corran Tuathail to Binn Chaorach ridge Looking back to Corran Tuathail from further along Binn Chaorach ridge Getting near the summit of Binn Chaorach Binn Chaorach - it's downhill all the way now.

From Binn Chaorach I descended North East towards Cnoc Broinne But at the low point headed South East down the corrie on the North side of Stumpa an tSaimh where I met some wildlife. I have now done Corran Tuathail four times, once via the route described here, once via The Bone, once via O'Sheas Gully and once via Central Gully.

If you are going for a leisurely day and you only want to summit Corran Tuathail then I would suggest that to get the best from it I would ascend by the three corries and choose one of the three gully routes to gain the Corran Tuathail to Binn Chaorach ridge. All three gullies bring you out on the right side of the pinnacle on the ridge. O'Sheas gully is by far the widest and the easiest. Central gully is to the left of O'Sheas gully but starts higher up whereas Curved Gully, on the left of Central gully starts roughly at the same level as O'Sheas. Curved gully finishes very close to the summit of Corran Tuathail

On the descent you can descend by the normal 'tourist' route but at grid 806 839 you can pick up the ramp which leads to a route off the mountain called Heavenly Gates. This will bring you down the East side of the mountain to the first of the three corries; Coimin Iochtarach, which you originally ascended.