The prolonged high pressure area over the UK has given some very fine days indeed, but at my home on the Shropshire/Wales border the light wind from the east has also brought awful dreary days of prolonged low mist. However, a look this morning at the weather forecast for the Welsh coast and at a live satellite view of UK cloud cover showed this was the place to head for.

On a couple of recent Welsh trips I'd looked toward the coast next to Cadair Idris and seen some interesting looking low hills that I thought would be worth a visit so this was the plan for today. Sarah also wanted a stroll alongside the Mawddach estuary so I quickly mapped out a circuit, statistics for the day turned out to be a bit more than a stroll though, more like a full mountain day, as I was reminded of a few times afterwards!


g120.gpx Open full screen  NB: Walkhighlands is not responsible for the accuracy of gpx files in users posts
We drove through the clag and, sure enough, just a few miles from the coast we came into blue skies and sun, marvellous! We parked next to the Penmaenpool toll bridge where there were crowds of folk preparing to cycle the Mawddach trail. Across the road and just a few yards to the west, a footpath heads up through the trees and joins a forestry track. This had recently been worked upon and there was a huge stack of felled timber awaiting collection. After about 1 km and 100m of ascent through the forest and out of the trees a plateau and wonderful hidden country is reached. Over a stile and looking at some footpath signs we had a dilemma as to which way to go next, most confusing! 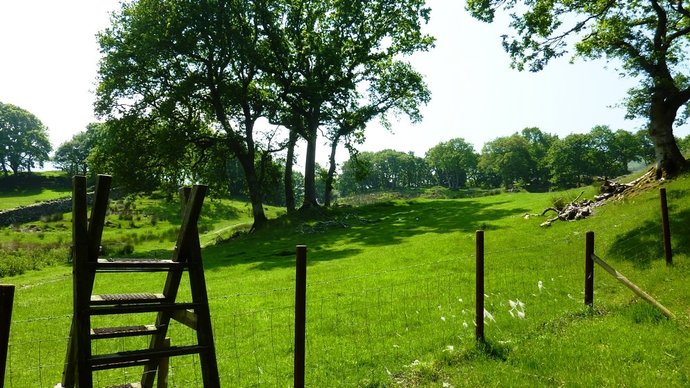 but which way is it, or does it mean go no further?

A track heads west and after passing through a few glades of trees the farm below Tyn-y-llwyn was seen and our first little hills beyond, looking good. After the farm, we followed the path to the north of the hills then headed steeply straight up next to a wall, to the heady height of 280m. You could continue further then take a track up but that wouldn't be so much fun, nor effort! 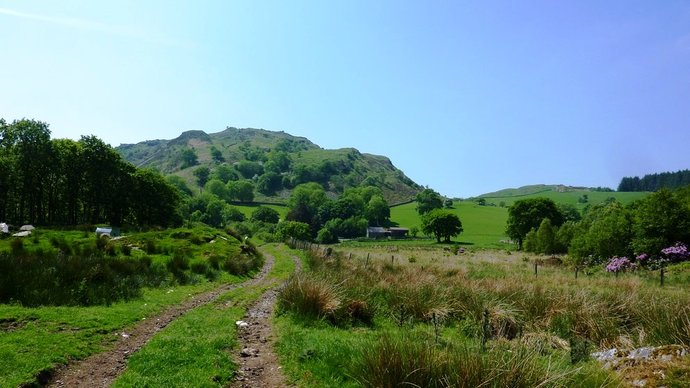 steep bit up alongside the wall Across the wall, then we started to head southwest so missed out the summit and hillfort of Craig y Castell. This is in fact a Marilyn, but I'm not interested in such matters! We went across a field of bog cotton dotted with wild rhododendron, absolutely lovely. No bog though, that's good. Across a fence and we joined a track that headed down to Waen-Fechan. Ahead there was the great sight of the Pared y Cefn Hir and Bryn Brith hill group. I offered Sarah the option of heading down to the estuary soon, or going that bit further to those marvellous-looking hills that just shouldn't be missed. She gave the correct answer. the steep western side of Craig y Castell 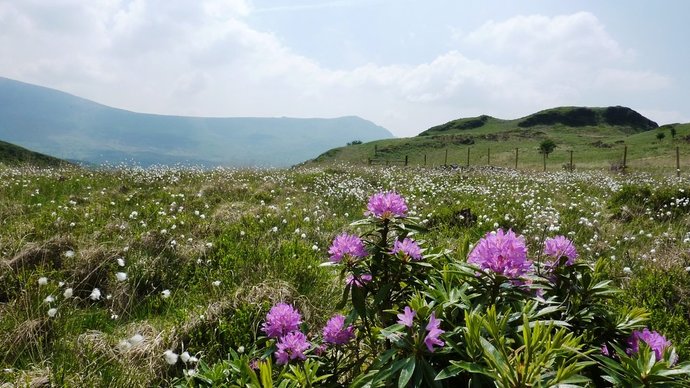 delightful bog cotton, and no bog! 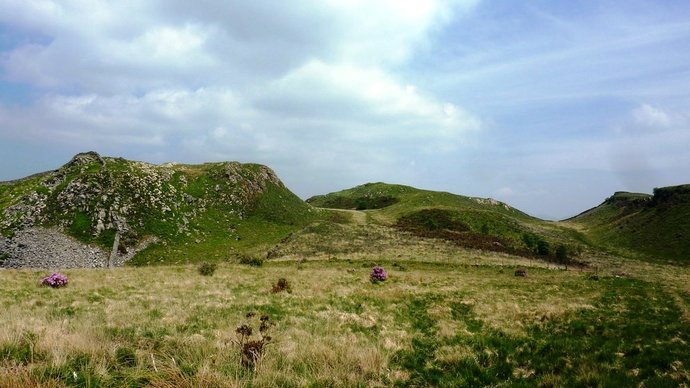 From Waen-Fechan the path was a tad sketchy so we had a session of bracken-bashing , limboing under barbed wire and clambering over fallen walls as we descended to Hafod-dywyll. I was not cursed, or at least I didn't hear it. A track to Kings YH was easier and there we headed up again through trees to the ruin of Reheboth Chapel. We saw that the cemetery is still used - lots of Evans hereabouts, or at least there used to be. 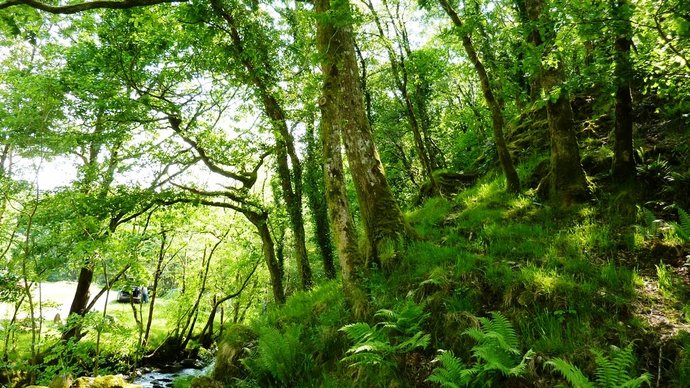 up from Kings hostel There is 1km of track to Ty'n Llidiart then a fine path alongside the south base of our target hill, Pared y Cefn Hir. Views of the Cadair Idris massif and her western friends are superb from this angle and you feel you are much higher than you are in this lonely-looking moorland terrain, magic. 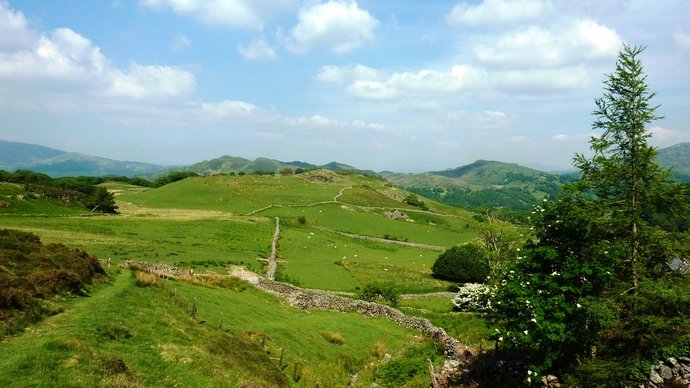 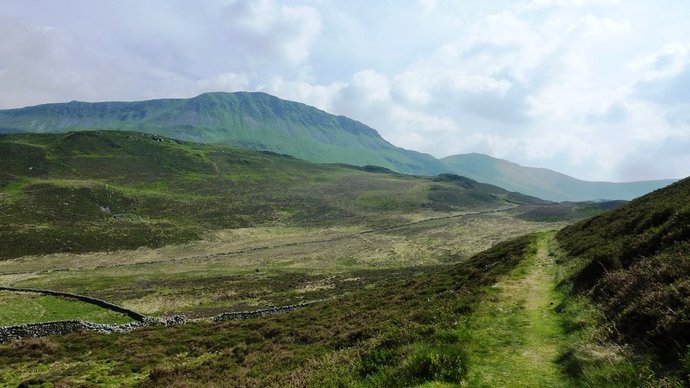 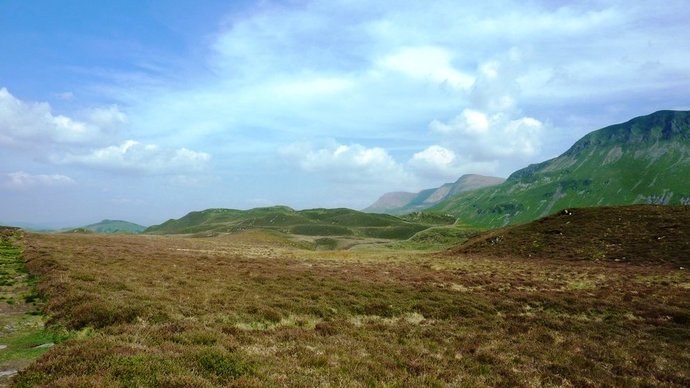 and the main massif

Llynnau Cregennen comes into sight and we reached the western end of our target hill. The map showed a path to the old hillfort and this was superb. Grassy to start, and then I spied scrambling ahead - what a bonus. A lovely open rock corner at a good angle for some great fun led us to the top of a ridge and wonderful views. And now up to 383m height! On the OS map, nearby Bryn Brith has a spot height so appears the higher peak but by chance I found a detailed survey done in 2013 that discovered Pared y Cefn Hir is 0.1m higher, so is a sub-Marilyn. Whatever that is. 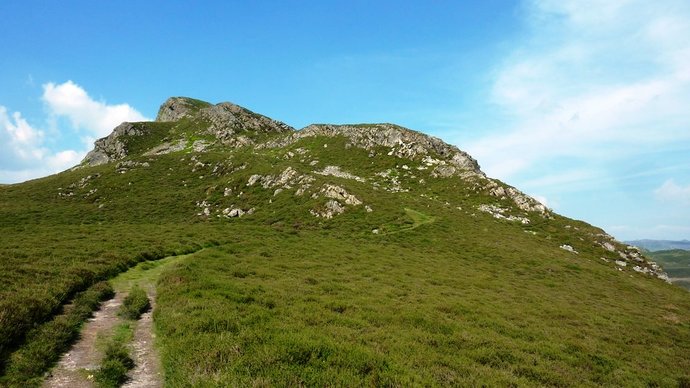 starting up Pared y Cefn Hir - steeper than it looks 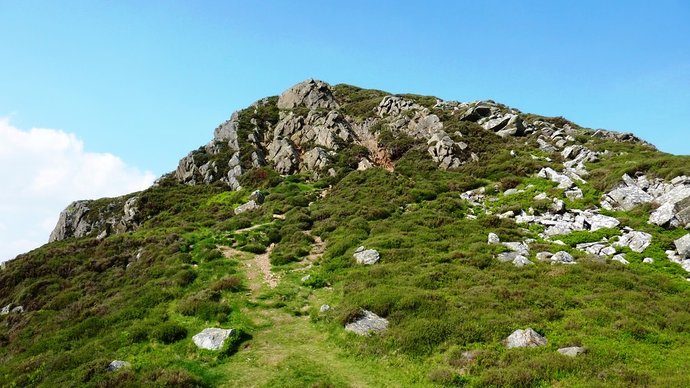 I spy something beginning with R - scrambling! The onward ridge is great too, with a few down scrambles and other scrambly bits that we did just because we could. We decided to keep Bryn Brith for another visit and head back, now suffering from lack of liquid - I had stupidly not brought sufficient. Steeply down off the end of the ridge and final scrambling, across a small plateau and down to the path just before Ty'n Llidiart where we looked at the house for an outside tap - there was none. the ridge ahead on the right, Bryn Brith opposite 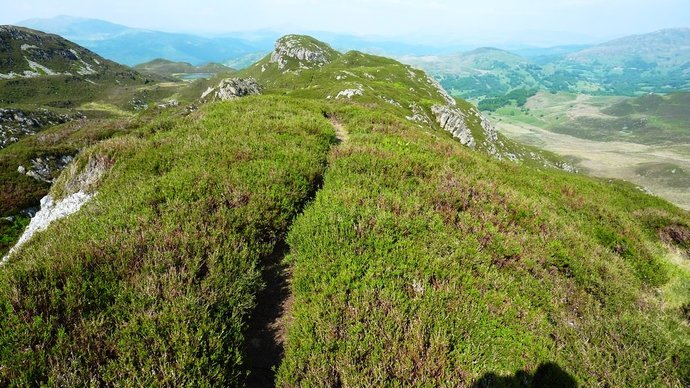 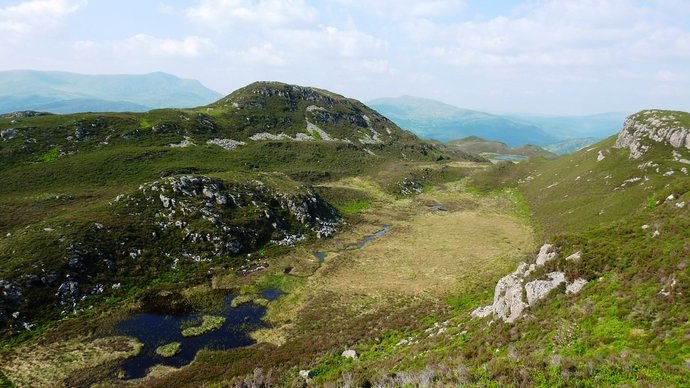 wet ground, Bryn Brith with Diffwys and Y Garn in the distance 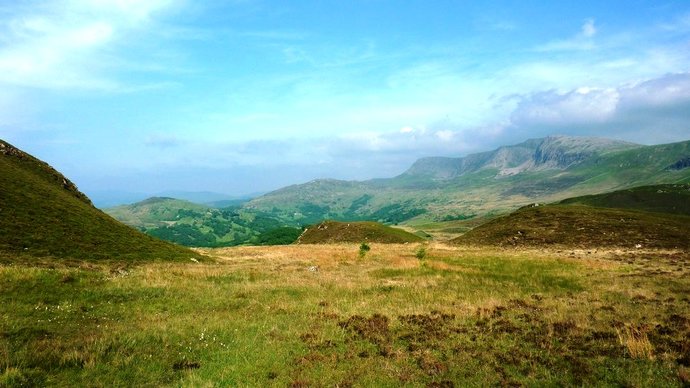 down from the ridge, heading back east

Back to the chapel then north through lovely woodland, across the road and down to the estuary. We didn't fancy water from the sheep-fed streams so were flagging as we headed east along the old rail bed. And then there was a dead-straight section of 1km that seemed to take forever. Sarah said what she wanted was a drink of lemonade. And then, as we neared the car, we saw folk milling about with drinks in hand. Yes, a bar was open at the George III hotel! We sat in the late evening sunlight supping a pint of lemonade and a pint of lager, what a result to end a brilliant day. the old rail bed next to the estuary, not far to the bar now!