I've climbed Snowdon a few times by various routes and on these and other nearby jaunts have admired the remote Yr Aran, and of course the fine looking rocky peaks of Y Lliwedd. A plan then to visit these 2 and I spent some time mapping out a route from the south, in particular the way back down to the south from eastern Lliwedd. I planned to include Snowdon again to sample the Clogwyn Du ridge from the bwlch below Yr Aran. And rude not to visit the summit again!


g121.gpx Open full screen  NB: Walkhighlands is not responsible for the accuracy of gpx files in users posts
I parked in a layby near the start of the Watkin path, avoiding the carpark charge. I walked up the lane rather than taking the newer path through the woods, to save time and effort, and was soon into the wonderful hills. It was just after 9, and quiet, nobody about. I cut the corner and considered climbing the old mining incline ahead but a wall and fence at the base, and how steep it looked, changed my mind. There would be plenty of effort needed later. After a couple of km a sharp turn to the left headed on a well defined path toward Bwlch Cwm Llan and Yr Aran. Upon meeting a walled embankment of the main mine track, go straight on and follow a dog-leg grass track heading west, now on a fainter path toward a small disused quarry. I continued ascending across grassy ground after the quarry spoil heap but the path goes immediately on the right of it as I could see later. No matter, the way ahead up to the wall on the rocky ridge is obvious from the worn rock up it. In good visibility of course. Once up this it is a simple matter of following the path next to the wall. The going was good with very little wet ground after the prolonged dry spell of weather. After 1km of easy ascent it gets steeper and a fence is crossed on a makeshift stile consisting of a fencepost nailed to a couple of uprights and unsupported at one end. Be careful. It's then a good clamber up to the summit of this fine peak at 747m. Hot going though in this fine weather with little wind. An hour and a half to get here, not bad, but I was to slow down a lot later. Views from here are superb - my route ahead with Crib Goch peeking out, the Nantlle ridge, Moelwyns and Moels, Cnicht - most climbed recently. It was rather hazy but fantastic nonetheless. steeply up to the Yr Aran approach ridge the route to come around the horizon, Crib Goch behind

My original plan had been to retrace my steps back to the fence and descend north to the bwlch, but the west ridge of Yr Aran looked too good so I went that way instead, very worthwhile. I met my first walker of the day, or rather a runner who was checking out some details for the Paddy Buckley round. This covers 47 peaks over 100km with a target time of 24 hours and I understand is reputed to be tougher than the Bob Graham and Charlie Ramsey rounds. Madness! I told him so, and that I was in awe. Always good to know there's folk even more nuts than oneself. Any road, I went down the west ridge until the gradient eased at around 600m then turned sharp right , keeping near the base of Yr Aran on a faint track to avoid any bogginess, and on down to the bwlch. There's a start of loose rock on the way up the ridge to Snowdon but this soon becomes a well-laid path of boulders. There are some steep sections and good bits of scrambling along the way, to a small plateau at around 800m. I spoke to a chap who was doing my round in the other direction and recommended the west ridge of Yr Aran for his ascent. From here the path is rock and earth as it heads over the lovely narrow highpoint at 931m and joins with the Rhyd-Ddu path and on across Bwlch Main, which is narrow and enjoyable. Not quite so much fun was the final 150m slogging ascent, as I found it today. That's most of today's ascent done though. Near the top I had a brief word with an Aussie couple who were doing a Rhyd-Ddu/Ranger path circuit, a fine choice I said. I went up the steps to the summit, not too crowded since I arrived between trains. I was ready for a food and drink stop but didn't want to stop here so headed quickly down the Rhyd-Ddu and turned onto the Watkin path. I had heard horror stories about this. At the top a short section of path has recently been rebuilt with boulders, then there were bags of boulders for the next stage of building but these were on the path itself so had to be bypassed on one side or the other, messy in places. After that it was fairly bad - some sections just dust and waiting for a slide, must be grim in the wet. I saw a paraglider launch from Lliwedd, more nutters! I was glad to reach the flat section anyway, and zoomed along to a fainter path off to the left and some rocky knolls at the edge of the drop to Llyn Llydaw. A fine spot for a half hour lunch stop, I wasn't that hungry though and was probably dehydrated as I was to find out a little later. Seagulls became my friend for a while as I shared my lunch. descending the Watkin path, make your way around the blockage Glaslyn from the lunch stop

There was a bit of scrambling over the rest of the knolls before I joined the main path again and past the junction with the Watkin Path at Bwlch Ciliau. From here the 150m ascent of Lliwedd is wonderful, a mixture of scrambling and short sections of path with various routes that can be taken over the rocks. But just a little way up I got severe cramp in my right thigh, like I had had on my ascent of Cadair Idris in Feb. I had a good drink and tried to massage it and continued by keeping my right leg straight as much as possible. An interesting way to scramble! More stops to drink, I only had a little remaining. I'd drunk half a litre at the car before starting and over a litre on the walk, still not enough it seems. A quick chat with a chap who bounded up the final pyramid, I limped up at a slower pace to the summit. scrambling back to the path junction of the Watkin path, about to get stuck into Lliwedd nearing the top, scrambler ahead

Just a short stop and I set off to the East Peak and onward down the ridge edge, across Lliwedd Bach and down to 700m. Cramp easier now. Lliwedd is a set of superb rocky peaks and one to return to. Where the path drops down toward Pen-y-Pass I turned east, finding a faint path that has interest as it meanders across the ups and downs. I stopped to look back at Lliwedd and take photos and noticed something glinting just below the summit. Climbers or paragliders? looking back from the East Peak and the route to come the fine terrain and cliffs of Lliwedd 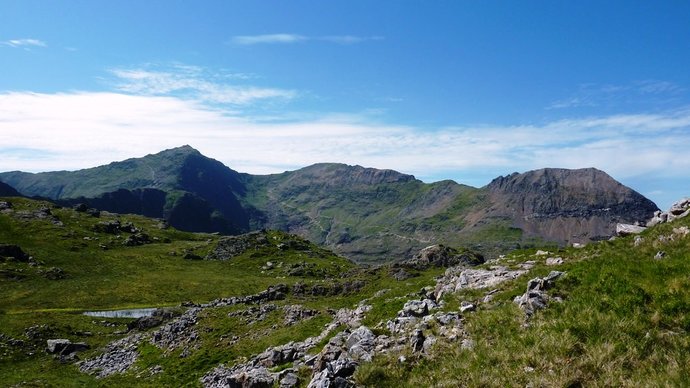 from Crib Goch to Snowdon I'm not interested in bagging Nuttalls but went out to Gallt y Wenallt to make the most of the place I was in. At the summit the cramp came again so the last of my drink and massage whilst I took a few minutes to take photos and admire the views once more. A Puma helicopter flew in and hovered above Lliwedd, then around Snowdon and back to hover just above Lliwedd Bach. I couldn't make out what it was about. Retracing my steps for a short distance I headed down toward the disused copper mine from a point near the 598m and 606m spot heights, not on the terrace I'd planned as it turned out but the next one to the north. The best terrace is just north of the stream that starts just below those spot heights. There was little wet ground and it was only 15 minutes to the mine. As well as an adit, there are a number of open cuts which stretch up the mountainside and much reddish-brown spoil, which has an industrial smell to it. As I approached the lower of these, a puff of white smoke billowed from it. At first I thought it was someone having a fire but no, no-one there and no sound at all. Is this the lair of the Welsh Dragon? I poked around a bit then worked my way down to the lower level, filling a water bottle at the stream which I quickly gulped down. The minerals seem to have done me no harm! nearing the disused mine The old mine track stretches away just to the west of south and strangely enough had the wettest sections of the day, nothing bad at all, but amusing. I must have gone into autopilot because I missed the sharp turn to the left after 1km and continued on a sheep trod/path. I did wonder why it didn't look like a mine track any more but thought 'oh well' and carried on. I approached a 2m high wall and was it was hilarious to see the path go through a low opening - a sheep-flap without the flap! Fortunately I didn't have to crawl through it, there was an opening in the wall just a bit further on next to some ruins, after which it was down the steep hillside to the Watkin Path. I filled the bottle and drank deeply again before crossing the stream and trundling back the last 2km to the car. looking back to the descent terrain the way home, but don't lose it!

A superb round and a lesson that I need much more liquid than I thought!

Nothing worse that running low on liquid, can put a real downer on a day. Mind you this did look a beauty over some truly classic Snowdonian terrain.