For years I've been wanting to get to the hills wild camping, before now only having taken the tent to a campsite below Tryfan. A trip to Wales with Mark was finally planned after many times of talking about it! What I really wanted was a linear route camping along the way, but before doing that we decided a base camp in the hills might be a better option for getting used to the weight of carrying the gear and trying out everything for a couple of nights.

We wanted a quiet area with no through routes so I looked into various options on the map. With the sustained warm weather with little rain, I reckoned streams at the head of cwms would be dry so thought a spot near a lake would be the best bet for our water needs and to saving lugging too much water in. I decided on the hills east of Blaenau Ffestiniog, the plan being to hopefully find a spot near to Llyn Bowydd which would be a relatively easy walk in from the town and well placed for some unclimbed Hewitts.

A 2 hour drive from home and there were a few convenient parking spots on the dead end road on the western edge of the Maen-offeren quarry spoil heaps just above the town. Setting out at 4.30 we walked up to the end of the road and onto a track through the quarry up to the large, disused dressing mills, passing an area where rock-crushing is taking place - bit by bit the spoil heaps are disappearing - perhaps in 100 years....?! Opposite the mills we went down a bank from the track to a bridge with narrow-gauge rails still in place, over the Afon Bowydd and onto the foot of Rhiwbach tramway incline no. 3. Up the incline and at the top, now at 475m altitude, the old rail track to the Cwt-y-Bugail quarry is reached. The old quarry workings are very interesting but it was good to see open countryside and green ahead after all the grey! The pack felt fine and progress was good, even though at 17kg it was heavier than I'd been aiming for. 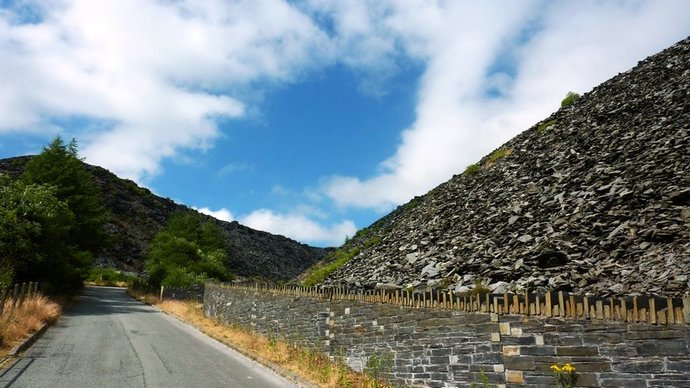 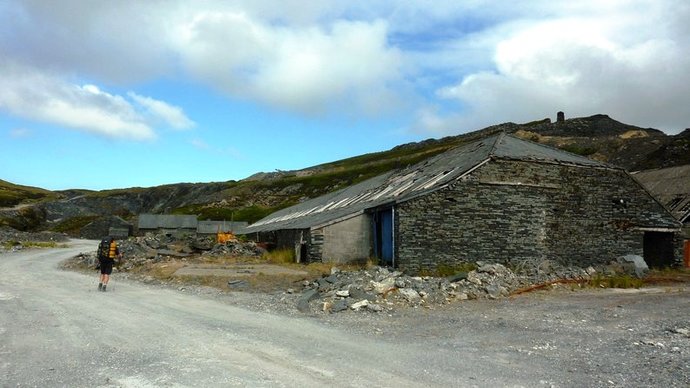 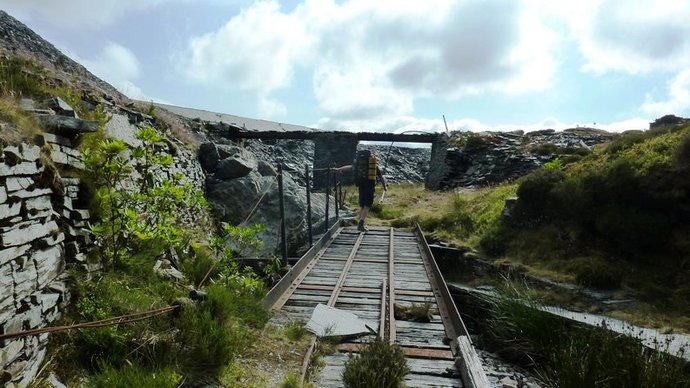 bridge below the mills 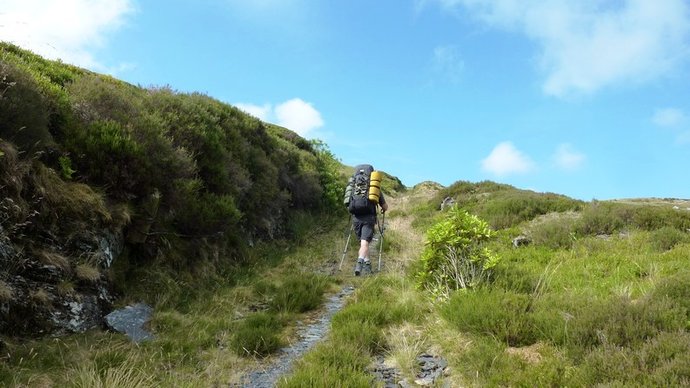 We walked along the rail track which has sleepers still in place, slowly decaying. Hereabouts there are well-engineered slate lined and roofed leats that supplied reservoirs to power machinery in days gone by. We reached Llyn Bowydd but were disappointed to find that it was very low, with no inflow nor outflow, and was lined with peat rather than the rock I'd hoped for. The water was very brown and unappetising so we decided it was not suitable. We carried on a bit past the lake but the few streams weren't running sufficiently so we turned back. Near Moel Bowydd we did find a small running stream that was high enough to have little chance of contamination, and found a superb camping spot nearby with views to Moel Penamnen, Moel Siabod and a distant Snowdon. 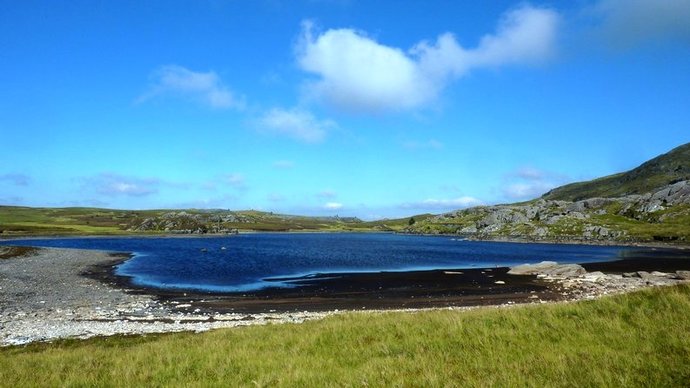 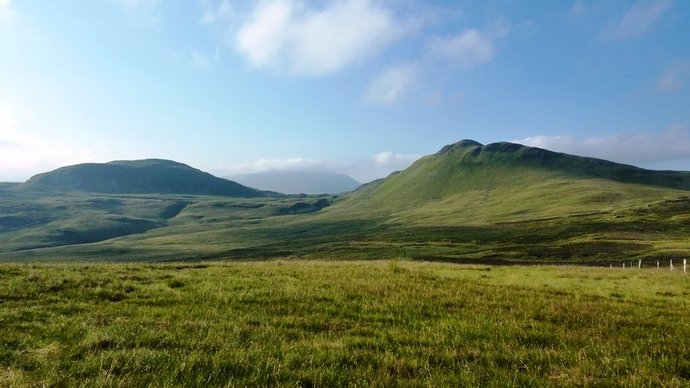 Off with the packs and we'd just set the tents out on the ground when a farmer appeared on his ATV, oh dear we're going to be evicted before we've even started! But no, he couldn't have been nicer and said we could stay for a week if we wanted to, even offering us what little water he had. And he confirmed that water from the stream we'd found would be fine. Whilst chatting he shouted no! and I turned to see his sheepdog peeing up my tent, oh well! We had a good laugh! He went on his way saying he'd pass again on his return from his tasks, so back to business - up with the tents and with the gear sorted for the night we went to the stream to fill up the water carrier, then back to camp for a well-earned brew. The farmer came back our way and we had another long chat (with his dog tied up!) followed by some local exploration and photo session. Strangely, after a day of clear skies, a lot of unexpected cloud rolled in to dilute the sunset. At 9 pm we sat down to dinner, I did enjoy my macaroni cheese with sliced smoked sausage. That was after the cans of G&T that I'd brought for us, a bit warm but still good! 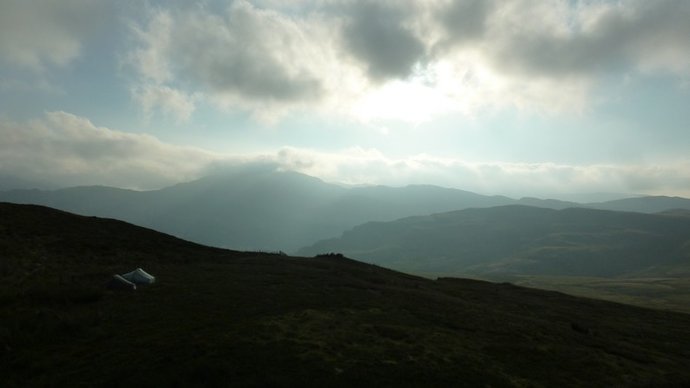 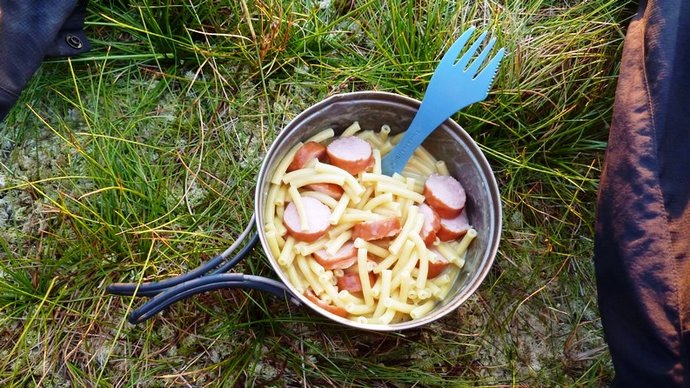 A couple of final photos at 10pm and another brew, the cloud increased and was almost down to the tents. No matter, it was dry with just a light breeze as we bedded down for the night, pushing aside previous thoughts of a night hike.....