Not a bad night's sleep in the tent although it took a while to drift off. Something was scratching away outside near my head but I chose to ignore it, hoping I wouldn't end up with a chewed tent. Awake early, but continued dozing on and off so not up and about until 7. It was very still and there were a few midges about so on with the headnet I'd thankfully bought before the trip. I brewed up for us both and had a light breakfast of Kellogg's bars and Babybell cheese, not bad! Another brew and we were away from the tents for a circuit route that I'd roughly estimated would be about 10km - very under-estimated as it turned out. It was a bit cloudy but due to clear fully early afternoon, feeling warm already though. Snowdon in the distance, centre

It was good to be starting at 500m, one of the benefits of a high-ish camp. Oh no, forgot my sunglasses, a quick nip bck to get them. We got onto the old rail bed and walked to Llyn Newydd, turning to head on the west side of it. Over the dry stream that feeds the lake and we headed to get on the ridge between Foel-fras and Moel Penamnen, not finding the path that's shown on the map. The going wasn't bad and most importantly, it was dry. We skirted the base of Foel-fras and up the small rise to the ridge then turned west. This was grassy and easy all the way to Penamnen, with a steep rise to the summit. Views were superb, even though it included the quarries which just can't be avoided. A drink stop here, this was to be a regular feature for us both as it got hotter. 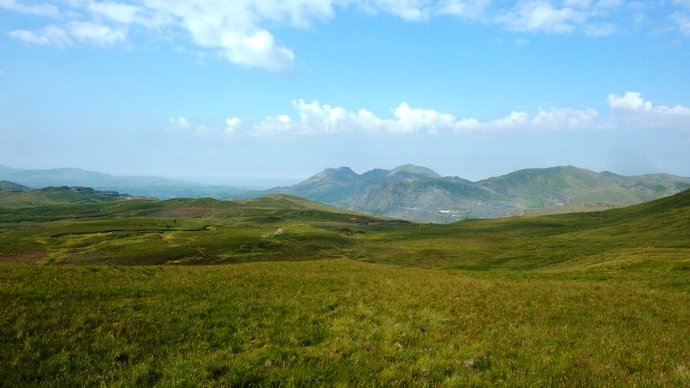 Looking back to Llyn Newydd We kept next to the edge on a sheep trod, turning north then descending steeply west to the col at 470m above the lakes of Llynnau Barlwyd (Farlwyd?). The southern of these was empty and the farmer had told us this is always the case. Staying next to the fence, we climbed Moel Farlwyd's ridge, turning north to the summit. We were able to see the detail of all of our onward route, looking good. 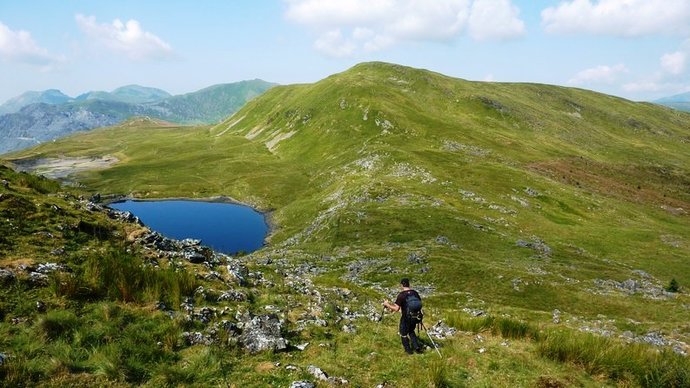 down to the road and the ridge to Allt-fawr

Steeply down at first then across tussocky ground to the road at 380m. There is no stile and the fence is topped with barbed wire so it was a climbing over job, taking care not to rip anything - one of the toughest parts of the day! Across the road and onto a track for a short distance before turning up the ridge and finding a good path near the fence. We dropped down to Llyn Drynogydd for a food stop and to replenish water bottles. This is a rock-lined lake and the water was of much better quality than we'd found before, we treated it with chlorine tablets anyway. It was a fine stop; tuna with kidney beans in a spicy sauce, piled into a wrap - delicious with nibbles of cheese. A lovely spot, tucked into the little hills, it's amazing to think there's a main road just 1km away. Shame about the small electricity supply lines at the western end. Mark had brought the kit to make us a brew, superb. Now we walked to the west end of the lake and just beyond turned south up the ridge, joining the path again. Good going once more, up to the 583m spot height then down a bit before the ascent to Allt-fawr at 698m. There's a bit of character in ascending this way. looking back to Llyn Drynogydd From here it was south next to a fence that's not shown on the map, a bit further on we found a sheep trod/path but this turned away to the west, and we wanted to go east down into the quarry. At the lowest point we looked at the way down but it was grim, so we went further east of south then east along a spur and north down to a quarry track. The going was tough on this descent, through low bushes surrounded by deep leg-grabbing holes, but it didn't take long. The old disused quarry track wound down to an area of flattened spoil heaps and onto newer tracks that we'd viewed from above. We went past the currently-used buildings which were deserted on this Saturday, and had to climb over the wall next to the locked gate to get out! Signs say no entry but there aren't any at the point we entered! heading south from the summit down the disused quarry track looking down into the deepest section of the quarry, much bigger than it looks looking back up at the descent route, top right

With water in mind needed for our camp later we went down the road to the cafe at the mountain-biking centre. There were no outside taps or drinking water taps. We bought drinks and snacks, but even though we said we needed water for camping the chap serving seemed reluctant to fill the water carrier, we made do with a couple of our drinks bottles being filled for us instead. So we won't go back there again for anything - that customer relations/helpfulness worked for him, didn't it?! We went back up the road and onto the footpath that heads east, My word it was so hot now, so after 1km we stopped for a drink and another meal, next to ruined buildings and a mountain-bike track. Another great stop that was! But we had to continue, so eventually set off, flagging a bit, actually a lot, in the heat.

We went across the track that leads north, and under the zipwire, but the path shown on the map wasn't visible on the ground so it was a vegetation-bashing trek to where we were surprised to find a stream that was running reasonably, so filled up the water carrier. Up a track to a sheepfold then it was an uphill leg back to our camp, where we collapsed gratefully. 28 deg and humid it was, compared to the 23 deg forecast. But it was blue skies and good visibility so we weren't complaining. having fun, or terror, on the zipwire

Brews, spicy noodles for dinner, sharing a small bottle of Rioja I'd brought, a mooch around taking photos, and watching the sun set over Snowdon were a fine end to the day. Only a few midges which soon disappeared. My original plan had been for this circuit, back to camp for lunch, then the Manods to follow. Today's circuit given its greater length and ascent than my poor estimate, and the heat, meant that the Manods could wait for another day, we've done enough thanks!

Whilst having dinner though, I realised I'd left my small penknife at our 2nd food stop, stupidly not putting it straight back in my pocket after using it. It was my Dad's well-honed knife and of sentimental value so I felt very sad. Mark offered to go back with me to our stop but I said it would be easier to walk to that spot from the road tomorrow. cracking view to Snowdon in the now cloudless sky the sun dips below the Snowdon massif

It was a superb, blue skies morning as we had breakfast and packed up to leave, and no midges. We headed down the way we'd come up and going through the quarry not far from the car met a couple from Texas who were having a week in the UK, then returning home to get married - honeymoon prior to marriage as he was going to be starting a new job. They were trying to get to the Llechwedd caverns and were following a poor map on their phone. We said it was not the best way to get there so gave them a lift. Then up the road a bit to park and walk in to yesterday's food stop. At first I couldn't see the knife but then a glint in the flattened grass cheered me up as I picked up the knife and zipped it in my pocket, what a result!

The camping element had worked out superbly and as hoped for and the circuit, whilst hard going in the heat, was enjoyable. Looking forward to the next wild camp!