Parked car in upper section of Gerlan after negotiating narrow lanes in Bethesda and eventually found the track alongside the Afon Llafar leading into the western Carneddau. Weather superb, not a cloud in the sky. Caught up with 3 young bucks who were also heading for the Llech Ddu ridge. After an interesting chat I pushed on ahead and once abreast of the steep spur I left the main track over broken boulder strewn ground to take a rising line around its right side up into Cwmglas Bach. On looking back I was surprised to see the other party continuing on up the track past the end of the Black Slab heading for Cwmglas Mawr which was not the usual approach. I passed several climbing parties, one pair on The Groove (E1 5b). The waterfall was non existent. I gained height awkwardly on a faint path through the scree until I was able to cut back left along a rising ramp above the rhyolite rock spur which led to the obvious start of the scrambling.

The first pitch was a steep open corner with a few wider ledges top left. This gave excellent sport and then the ridge eased for a while over narrow but straightforward ground until a more definite steepening led to a raised prow of rock with incuts on either side. From videos I knew this prow was the taper end of a large sloping block which widened out with a long step down at the end. The ridge continued with easier ground regularly interspersed with more challenging exposed semi-technical pitches over slanting grooves, pinnacles and spikes. From above the sloping block I could see the three-party making progress below. There was also a group of three about 100m above me. 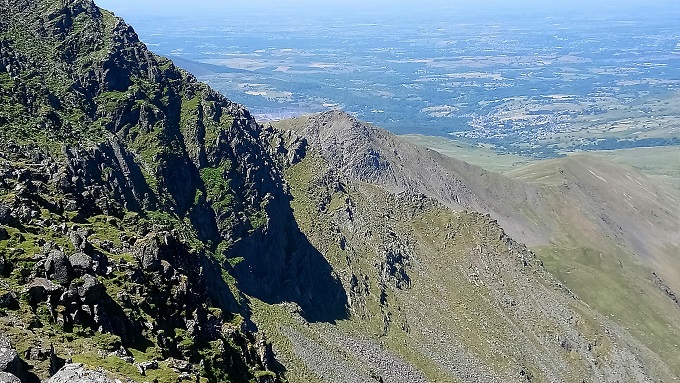 After some final steep pitches the ridge merges into the northern broken slopes of Carnedd Dafydd. Suddenly from the solitude of the ridge I was in crowds of people on the mountain crest. But it was the remarkable view of Tryfan and the Glyders to the south that caught my attention. A beautiful clear day and I was regularly passed by sponsored runners as I continued on over Carnedd Llewelyn and Yr Elen. Very steep loose rocky terrain requiring a lot of concentration eventually led to gentler grass meadows and baked bog to cross the river to regain the outward track. An excellent day highly recommended.