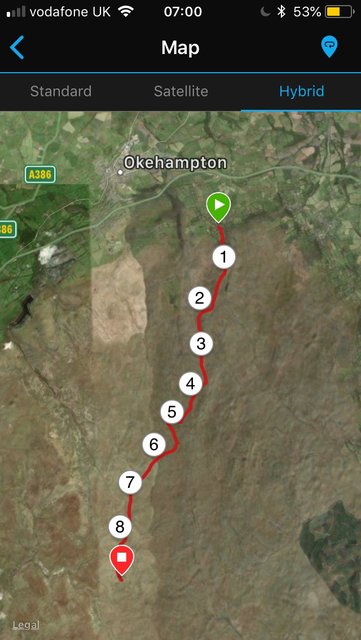 The way out to Fur Tor.

My 22 year old son Sam was back home for a visit after 8 weeks trekking around Bolivia mainly. He was up for a mountain walk whilst home but we settled on Dartmoor. Due to his level of fitness, combined with the long period of dry weather, Fur Tor looked a good option so we booked two nights at The Tors Inn in Belstone as our base. Sam really wanted to include High Willhays so a pretty long walk was planned for! During the run up to the trip I was a little surprised that I could find nothing on line about a circular walk from Belstone to Fur Tor which is why I decided to post this report of our trip. Here goes:

We skipped breakfast at The Tors Inn in favour of an early start but when we mentioned this to the owner Kevin the night before he offered to make us up a full packed lunch for the trip which was excellent.

We set off from Belstone at 0745 and headed out of the village going due south along the side of the ridge line on part of the Tarka Trail. Past Belstone Common, Belstone Tor, Higher Tor then cut right up to Oke Tor and stopped to take bearings. At this point the rain came and some mist also reducing visibility. We moved on southwards on paths to turn right to an observation post at Okement Hill. At this point we were quite wet throughout but it was 20C, visibility was not getting worse.

Turned left due south then after a while right turn on the Peat Pass which turns into tougher going. Tussocks and getting boggy. We headed SSE at 210 degrees to ford stream which was OK and on to the east of Black Ridge then just west of Great Kneaset. On this section we found a dead cow in a very boggy section which looked like it has simple got stuck and couldn’t get out. This brought it home to us just how wild this place is and how careful you have to be. Still raining and the worst of the walking was coming up. Over Great Kneaset we could see the Hags leading to Little Kneaset and just beyond it Fur Tor. It looks and feels remote and magnificent. The rain added to this, - we went on due south through the bogs. Horrible walking and across a few small streams, - we learned eventually to spot the worst sections (greener tussocks) from the drier areas (less green or slightly brown). To be honest we were wet through including footwear (fully waterproof leather boots) - just a factor of the consistent rain and walking through the wet Hags, tall damp tussocks and fording the streams. We were walking well, comfortably warm and this was obviously the best time to attempt this after weeks of dry weather.

Just before Little Kneaset we disturbed a fox which ran, jumped and hopped away through the bog at an amazing pace! A real joy to watch and it was in fantastic condition compared with the London foxes we see living off left over bin fodder back home. Another ford and over Little Kneaset. On the way down to the stream Sam jumped as a frog had surprised him! It was so calm and quiet here. Tranquil.

A climb up to the summit of Fur Tor and The Tors Inn packed lunch which was well earned! GPS said we had walked 8.7 miles which meant we still had a long way to go. We both felt well but my hips were sore from walking across the tussocks and bogs. It is tough going. Conscious of where we were and how far we had to go we only stopped for 20 minutes which was enough to catch our breath and enjoy the immense feeling of remoteness that you get here.

We decided that our second stop at High Willhays was achievable but we took a gamble on the route North and slightly altered our direction to try and improve the next section. This paid off. So we set off due north to the west side of Little Kneasett. At the ford the bog was deeper and boots in again. Up and over and then on to the west side of Great Kneaset. Boggy as before and the tussocks difficult to get over with two turned ankles for me. Nothing major but once again a wake up call to how difficult this area is. Glad to get over Great Knesset and aim towards the top of High Willhays which is a good climb. Much better ground and strong walking to the summit now the wet ground as behind us. Along the ridge line to Yes Tor and then East Mill Tor. Now heading down which was a relief and past the military firing bunkers and on to Cullivers Steps which is a beautiful spot. Along the west of the ridge line now towards Belstone and home through the village.

The whole route was just shy of 18 Miles and we made it back really pleased with the walk. It was 3pm so 7 hours 45 minutes with around 30 minutes stopped so it was a hard days walking but it needed to be so that we had time in hand if we took longer or had issues. I certainly wouldn’t recommend it in any way as a beginners route, - the Peat Hags around Fur Tor are dangerous but we undertook this after a heatwave and we are both fit with some experience of walking the moors, navigational abilities and properly prepared with plenty of spare food, water and GPS as back up. 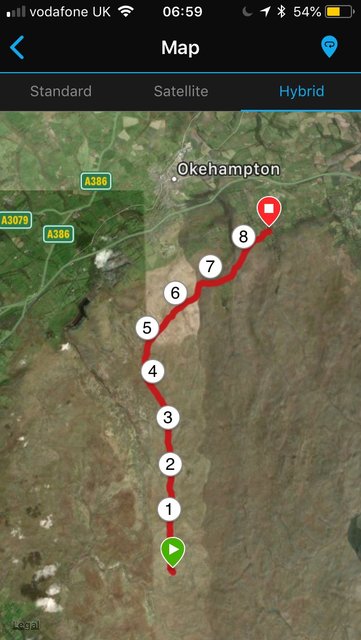